'It looks like a war zone': Nashville tornado survivors say they saw a green sky and gutted buildings following the storms 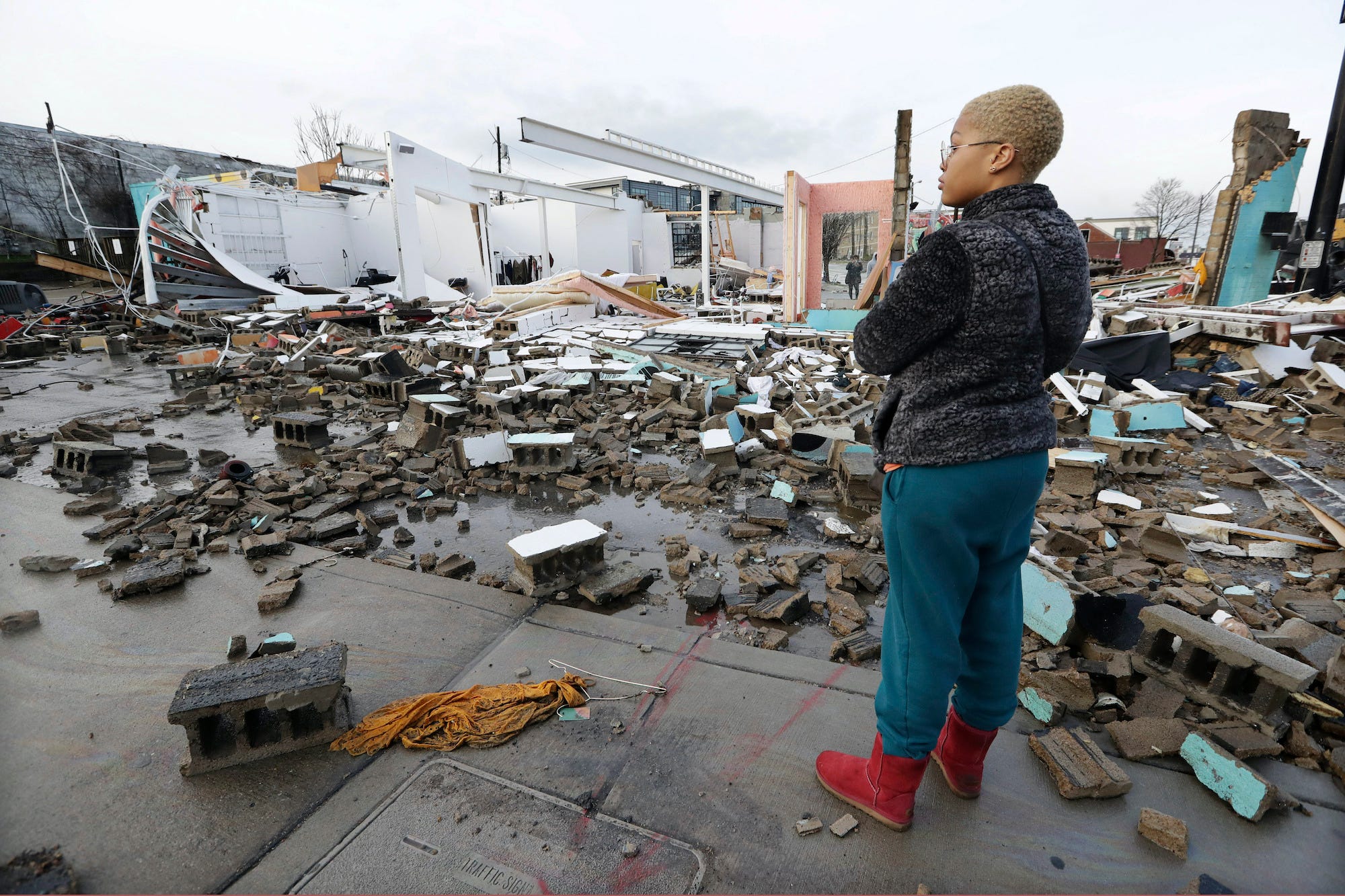 Derrick Brown had just tucked himself into bed Monday night after traveling back to his Germantown home from the airport when the neighborhood’s tornado sirens were activated.

At first he didn’t think much of it, but then he lost power. When he checked the news on his phone, Brown realized the tornado was close by and ran downstairs to get into a bathtub.

“Living in the South, you hear sirens all the time,” he said. “A lot of the time the immediate threat is far away.”

This time it wasn’t the case. The tornado touched down on Brown’s block and tore through adjacent buildings. The windows of his building were blown out, cars in the area were crushed. He and others have been displaced.

At least 22 people were killed overnight on Monday when two tornadoes ripped through Nashville, destroying homes and buildings.

“There’s a rental complex across the street and the roof was completely ripped off,”Brown said. “It looks like a war zone.”

Brown said he went into his condo Tuesday morning and cleaned up what he could, but he’ll be staying with family 40 miles away until repairs are made. Germantown was one of the hardest hit neighborhoods in East Nashville.

Andrew Bateman lives in the area of Germantown and North Capitol.

The train tracks near his condo have been under construction for the last week, so when what sounded like a freight train started blaring through his neighborhood late Monday night, he knew what it was.

After his girlfriend received a tornado warning to her phone, they stood between the bathroom and closet in the middle of their home.

“We used to hear the train every day. This sounded like it was a fast, fast train,” Bateman told Insider. “It probably lasted for about five minutes. There was tons of lightning.”

Bateman, who is among the nearly 50,000 people who power from the tornado, said Tuesday morning that he hadn’t left his home yet to assess the damage, but believes his property was mostly spared.

My heart, thoughts and prayers go out to everyone in the Nashville area affected by the tornado last night. Even if the tornado didn’t hit our personal space, we are all affected because we are Nashvillians. My heart hurts for Nashville this morning. #sendingprayers

But the neighborhood has a lot of new buildings, and Bateman saw damage there.

“You can just tell that the construction got pretty messed up,” he said. “About three blocks up is where it must have touched down.

“Bateman said he’s been able to get in touch with almost everyone he knows in the city but is concerned about the more than 100 individuals who live in a homeless camp in the area that was most damaged.

“Under the Jefferson Street Bridge, there’s a pretty large established camp on each bank of the bridge,” he said. “We were really, really lucky.”

The Nashville Farmers’ Market has been established as a shelter. Ashley Johnson, who lives in East Nashville about a block from downtown, also compared the sound of the tornadoes to a freight train headed toward her house.

After getting an alert urging them to take cover, Johnson and her three roommates piled into a closet in her room.

“The sky was green,” Johnson said. “I’ve never seen it glow green like that. It was hailing, probably about the size of golf balls. The wind was super, super bad.”

Johnson said she is shocked by the level of damage her neighborhood sustained. A friend’s home is destroyed. Several of her roommates work downtown at businesses that are no longer standing.

Johnson, who works at a dog-boarding business, made it to work Tuesday morning but said that some roads were impassable with downed trees and wires.

Now that she’s home for the day, she and her roommates plan to hit the streets to see what they can do to help clean up.

“It’s just honestly really bad; it’s just a lot worse than what people know,” she said. “I feel kind of lucky to honestly to be alive.”

Lisa Estrada lives near the Five Points business district in East Nashville. Early Tuesday morning she, her husband, and their 13-year-old son took cover when they heard the tornado move into the area.

“We were underneath the stairwell area, Harry Potter style, because there aren’t basements in Nashville,” she said. “The sky was bright – the noise was just incredible.”

East Nashville isn’t letting a tornado stop us from participating in our democracy. What’s your excuse? #nashvillestrongpic.twitter.com/JlcFyLGu01

At about 1:10 a.m., when the noise had winded down, Estrada looked outside and was amazed by all of her neighbors walking around carrying flashlights.

“You could hear people asking [other] people if they needed help,” she said. “Our neighborhood is just a mess. There are lots of old historic homes in our neighborhood, lots of damage.”

The iconic “I Believe In Nashville” murals started popping up after the big flood ten years ago. It’s stood as a symbol of resilience and togetherness. We are heartbroken for our community after last nights tragic tornado, but know that together we will rise up and rebuild again! pic.twitter.com/WlDutCaHhw

The Five Points area, a touristy business district, was hit especially hard, she said. Restaurants and bars were destroyed.Photos from the scene show roofs ripped from buildings and businesses gutted. One school, Donelson Christian Academy, is a pile of rubble.

Please be in prayer for our school and the Stanford Estates neighborhood. We will wait until daylight to share further updates. #DCAWildcatspic.twitter.com/vZfTGfdtOz 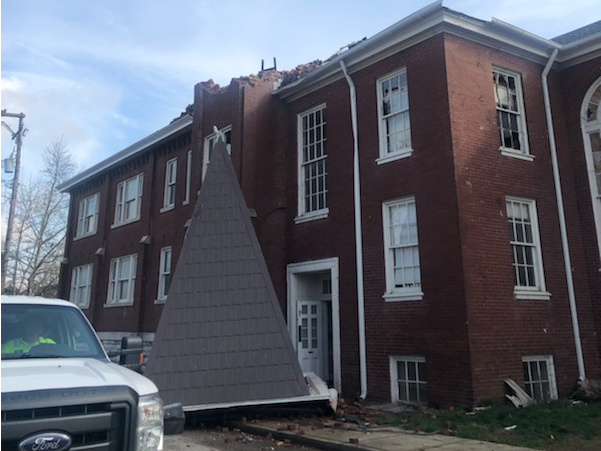 Later Tuesday morning, Estrada and her husband drove their son his private school on the other side of the city. They were able to charge their phones in the car, but cell service was spotty, she said.

After dropping Fredy off, they stopped at a polling place to vote. Five polling places had been combined because of the storm and the lines to vote were long.

“It was a little bit of chaos – they only had about four machines,” she said. “The lines were really, really long.”

Still, Estrada thought it was beautiful that so many East Nashville residents showed up to participate in democracy, even though their city had just suffered in the tornado.