In a NASA simulation of an asteroid impact, scientists concluded they couldn't stop a space rock from decimating Europe 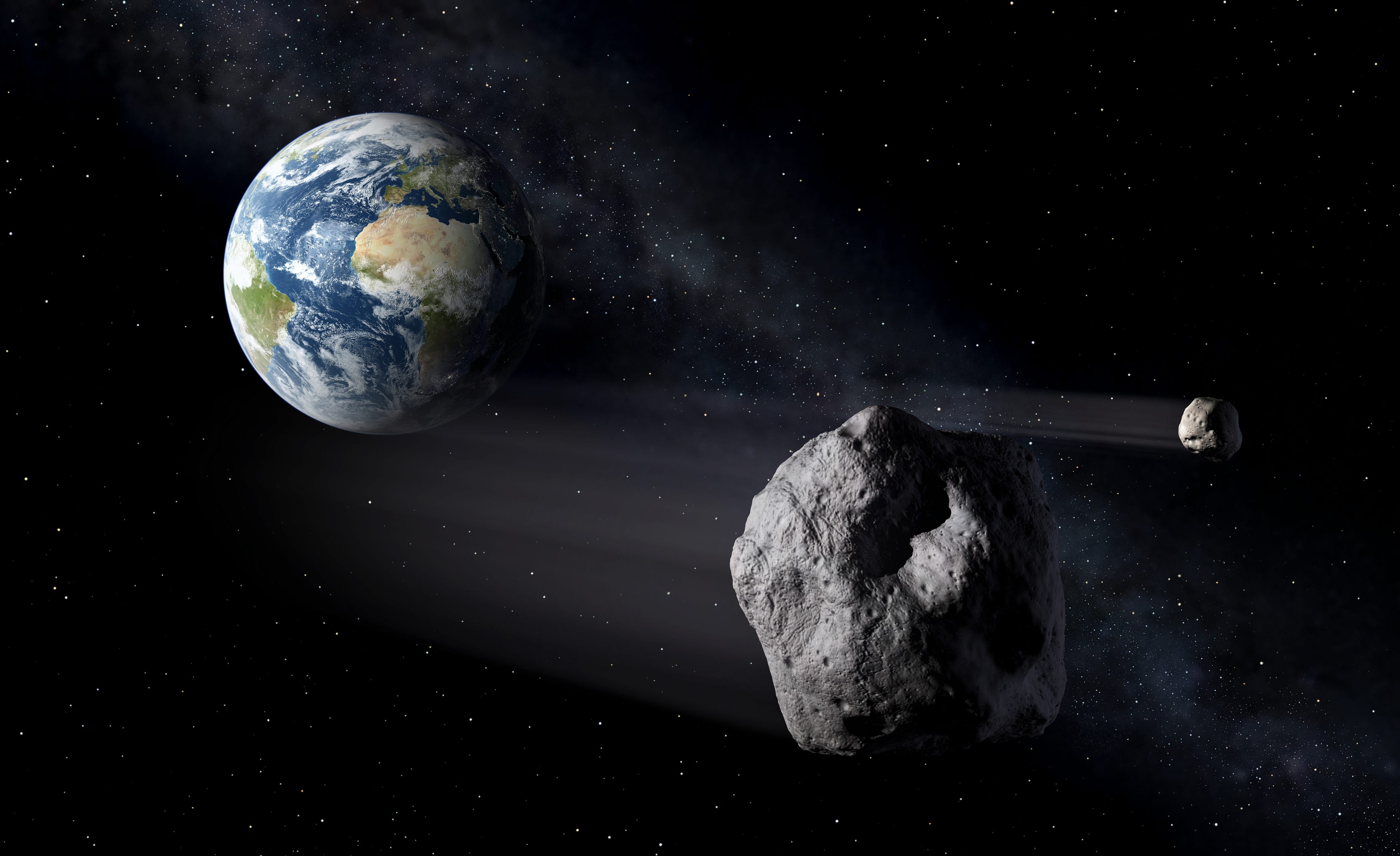 Scientists around the world have been bamboozled this week by a fictitious asteroid heading toward Earth.

A group of experts from US and European space agencies attended a week-long exercise led by NASA in which they faced a hypothetical scenario: An asteroid 35 million miles away was approaching the planet and could hit within six months.

With each passing day of the exercise, the participants learned more about the asteroid’s size, trajectory, and chance of impact. Then they had to cooperate and use their technological knowledge to see if anything could be done to stop the space rock.

The experts fell short. The group determined that none of Earth’s existing technologies could stop the hypothetical asteroid from striking given the six-month timeframe of the simulation. In this alternate reality, the asteroid crashed into eastern Europe.

As far as we know, no asteroids currently pose a threat to Earth in this way. But an estimated two-thirds of asteroids 140.21m in size or bigger – large enough to wreak considerable havoc – remain undiscovered. That’s why NASA and other agencies are attempting to prepare for such a situation.

“These exercises ultimately help the planetary-defense community communicate with each other and with our governments to ensure we are all coordinated should a potential impact threat be identified in the future,” Lindley Johnson, NASA’s planetary defense officer, said in a press release.

The fictitious asteroid in the simulation was called 2021PDC. In NASA’s scenario, it was first “spotted” on April 19, at which time it was thought to have a 5% of hitting our planet on October 20, six months after its discovery date.

But Day 2 of the exercise fast-forwarded to May 2, when new impact-trajectory calculations showed that 2021PDC would almost certainly hit either Europe or northern Africa. The participants in the simulation considered various missions in which spacecraft could try to destroy the asteroid or deflect it off its path. 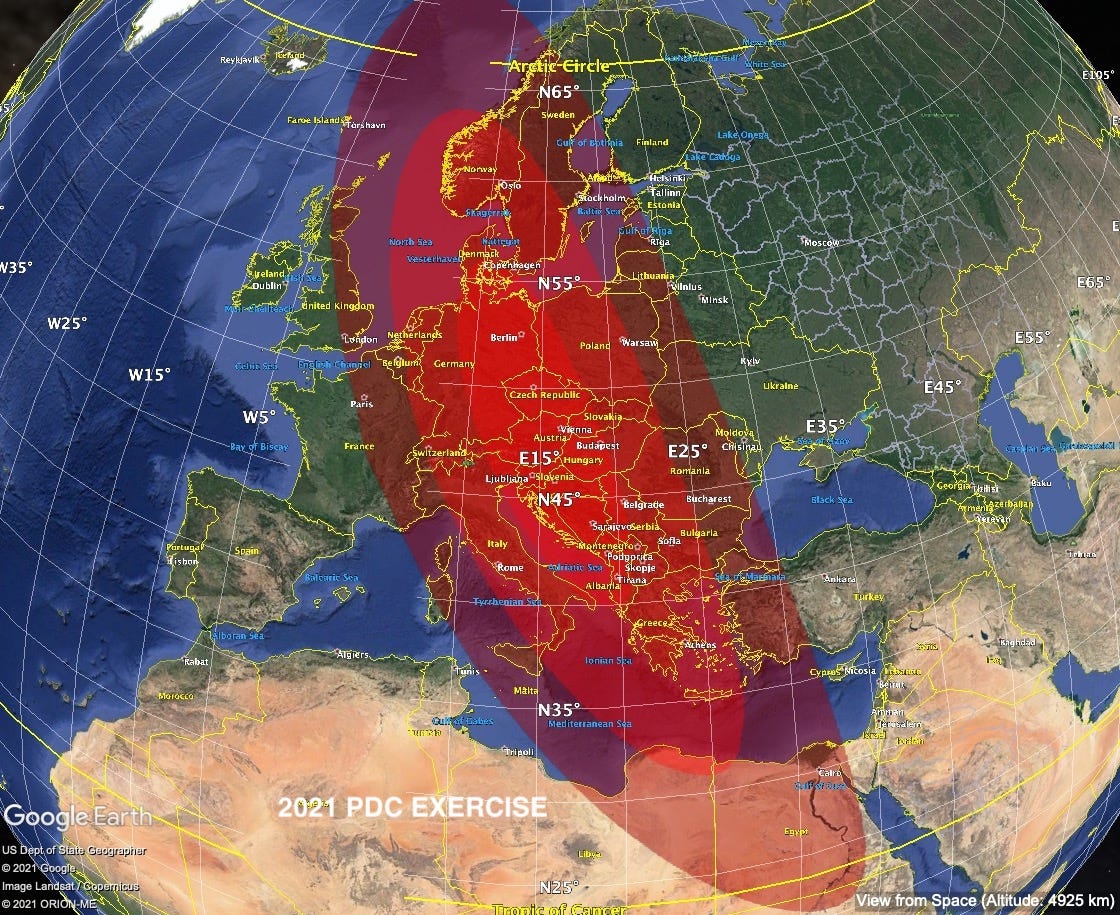 NASA/JPLThe predicted impact region for 2021 PDC on Day 2 of a NASA-led asteroid-impact simulation.

But they concluded that such missions wouldn’t be able to get off the ground in the short amount of time before the asteroid’s impact.

“If confronted with the 2021PDC hypothetical scenario in real life, we would not be able us to launch any spacecraft on such short notice with current capabilities,” the participants said.

They also considered trying to blow up or disrupt the asteroid using a nuclear explosive device.

“Deploying a nuclear disruption mission could significantly reduce the risk of impact damage,” they found.

Still, the simulation stipulated that 2021PDC could be anywhere from 34.75m to half a mile in size, so the chance that a nuke could make a dent was uncertain.

Day 3 of the exercise skipped ahead to June 30, and Earth’s future looked grim: 2021PDC’s impact trajectory showed it headed for eastern Europe. By Day 4, which fast-forwarded to a week before the asteroid impact, there was a 99% chance the asteroid would hit near the border between Germany, the Czech Republic, and Austria. The explosion would bring as much energy as a large nuclear bomb.

All that could be done was evacuate the affected regions ahead of time.

Most asteroids fly under the radar, and many are spotted too late 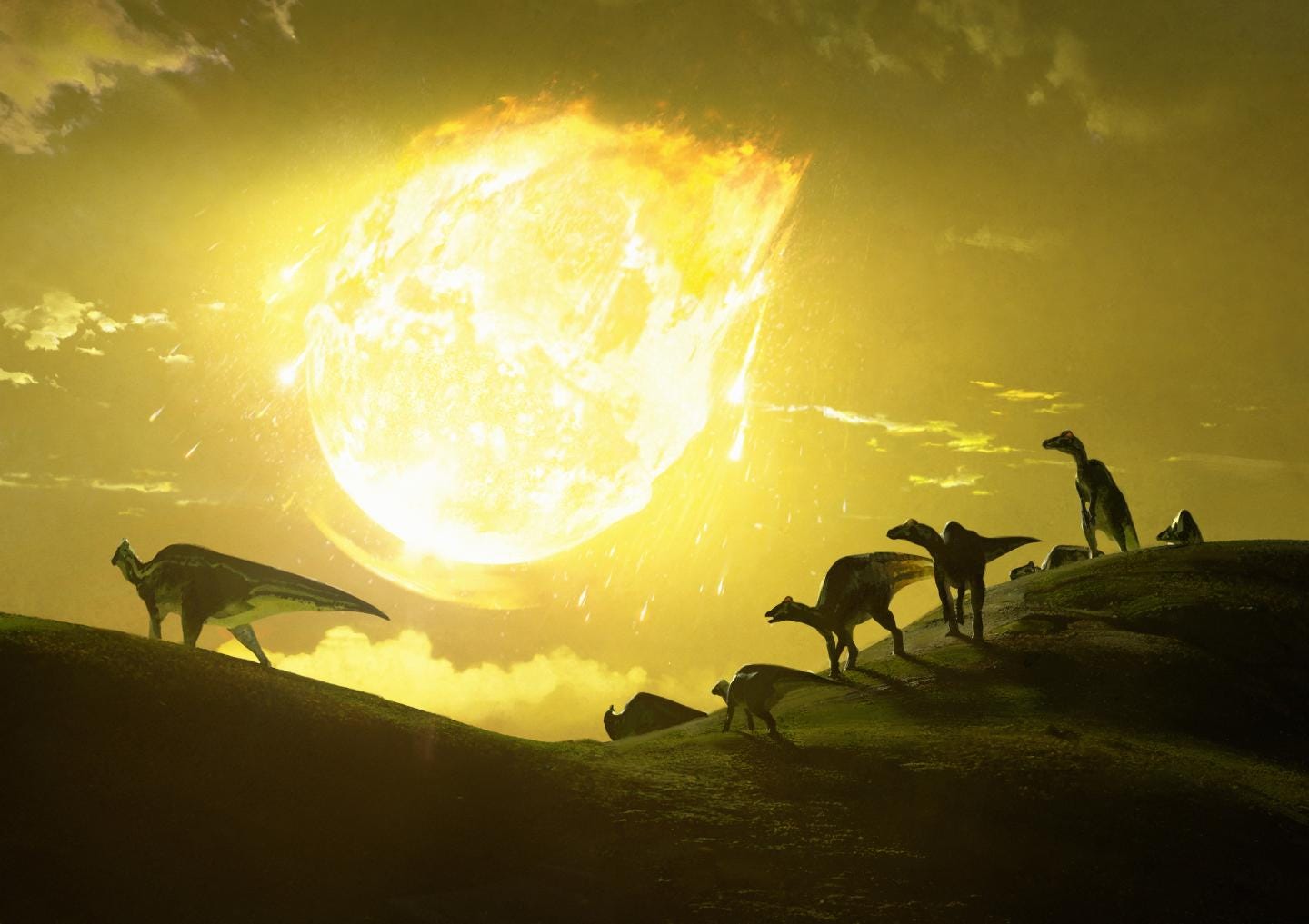 Chase StoneAn artist’s depiction of the moment the Chicxulub asteroid struck the land that is now Mexico 66 million years ago.

It’s tempting to assume that in the real world, astronomers would spot an asteroid akin to 2021PDC with much more notice than six months. But the world’s ability to surveil near-Earth objects (NEOs) is woefully incomplete.

Any space rock with an orbit that takes it within 125 million miles of the sun is considered an NEO. But Johnson said in July that NASA thinks “we’ve only found about a third of the population of asteroids that are out there that could represent an impact hazard to the Earth.”

Of course, humanity hopes to avoid a surprise like the dinosaurs got 65 million years ago, when a 10km-wide asteroid crashed into the Earth. But in recent years, scientists have missed plenty of large, dangerous objects that came close. 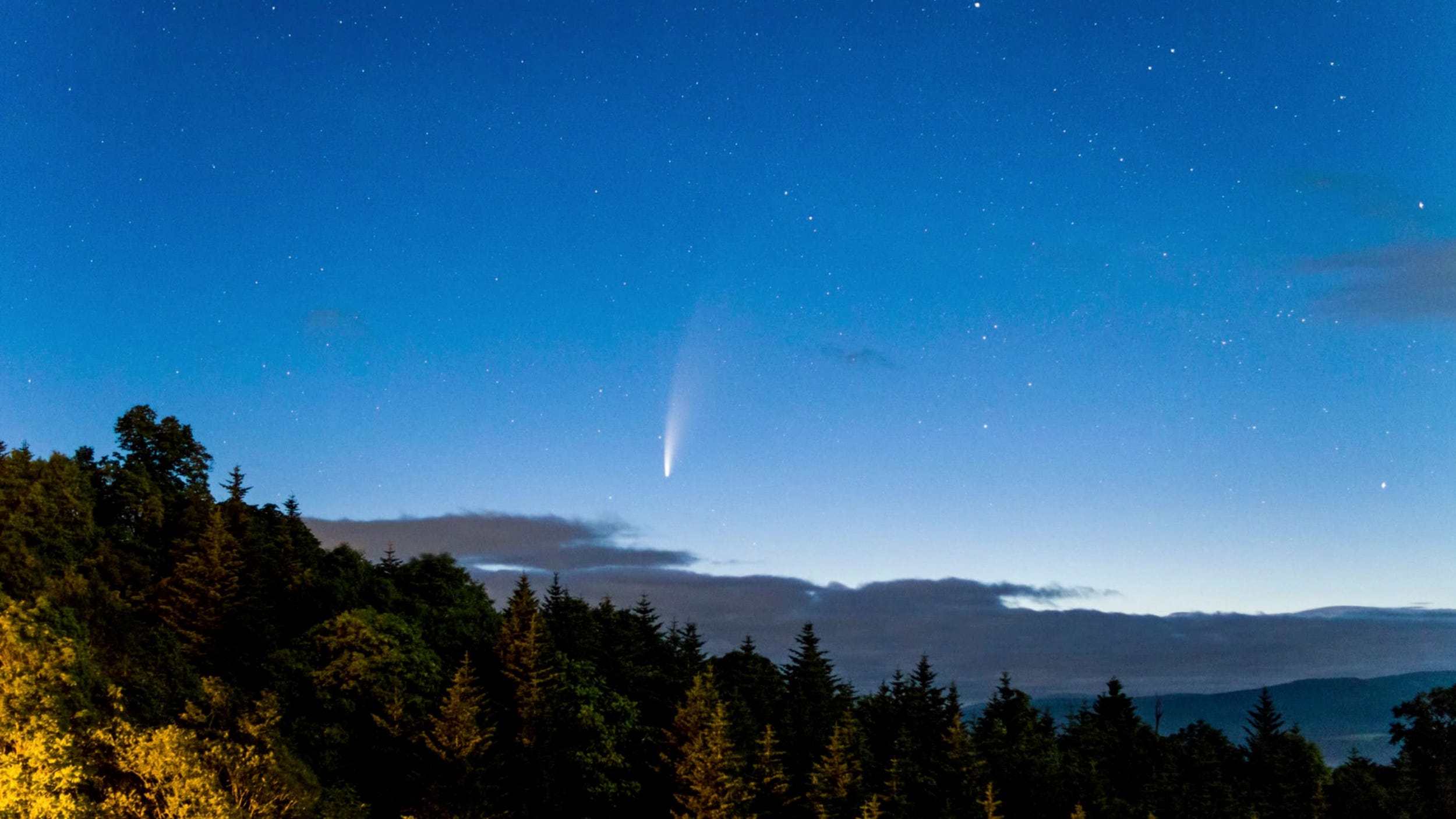 Comet Neowise, a 5km-wide chunk of space ice, passed with 64 million miles of Earth in July. Nobody knew that comet existed until a NASA space telescope discovered it approaching four months prior.

In 2013, a meteor about 19.81m in diameter entered the atmosphere traveling 64,374km/h. It exploded over Chelyabinsk, Russia, without warning, sending out a shock wave that broke windows and damaged buildings across the region. More than 1,400 people were injured. 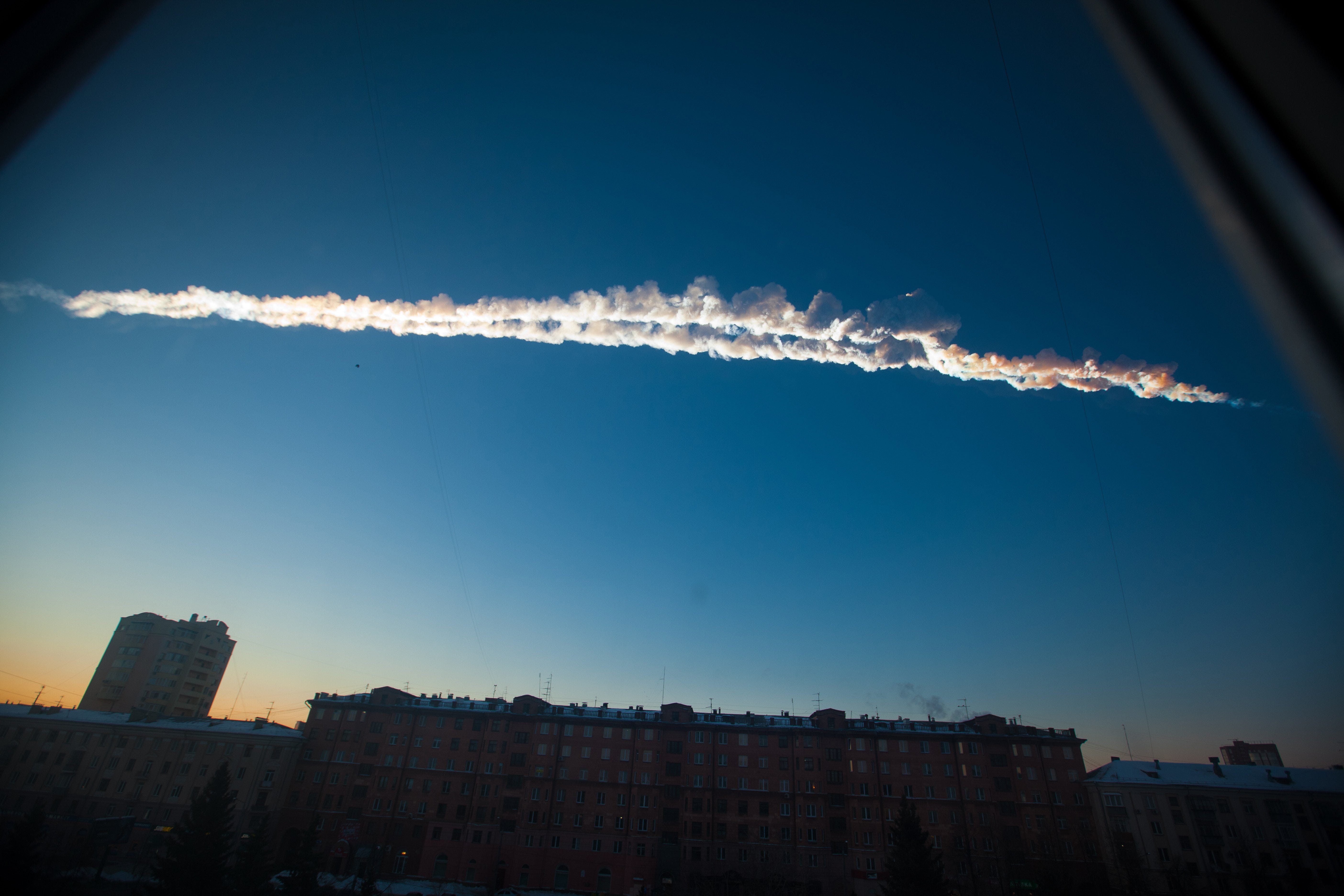 That’s because currently, the only way scientists can track an NEO is by pointing one of Earth’s limited number of powerful telescopes in the right direction at the right time.

To address that problem, NASA announced two years ago that it would launch a new space telescope dedicated to watching for hazardous asteroids. That telescope, named the Near-Earth Object Surveillance Mission, along with the European Space Agency’s newly launched Test-Bed Telescope and the Flyeye Telescope that’s being built in Italy, should eventually bolster the number of NEOs we can track.

NASA is testing ways to stymie an asteroid 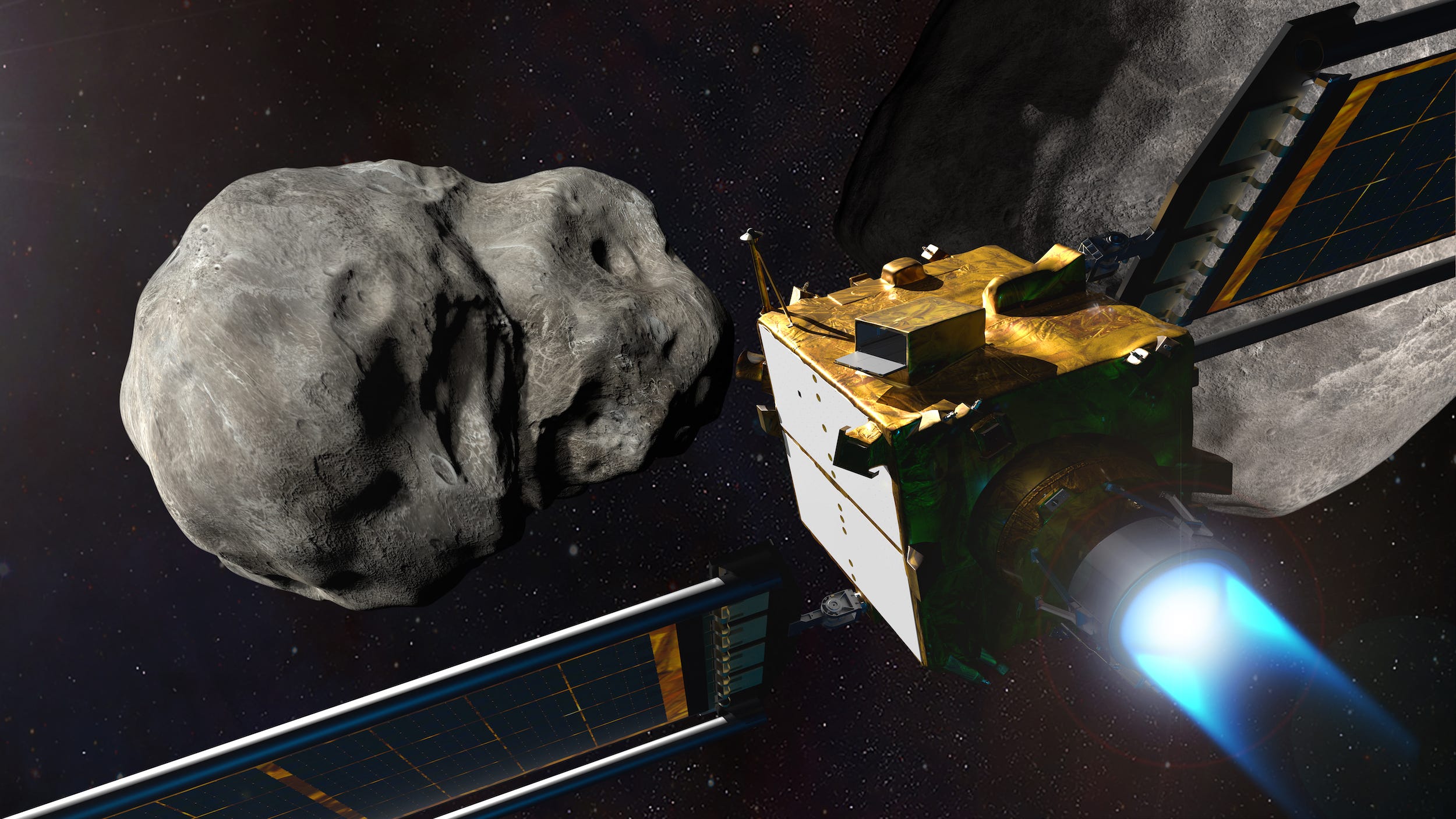 NASA/Johns Hopkins APLAn illustration of the DART spacecraft near an asteroid.

NASA has investigated the options scientists would have if they were to find a dangerous asteroid on a collision course with Earth. These include detonating an explosive device near the space rock, as the exercise participants suggested, or firing lasers that could heat up and vaporize the asteroid enough to change its path.

Another possibility is sending a spacecraft up to slam into an oncoming asteroid, thereby knocking it off its trajectory. This is the strategy NASA is most serious about: Later this year, the agency is scheduled to launch a test of such a technology. The Double Asteroid Redirection Test (DART) will send a spacecraft to the asteroid Dimorphos and purposefully hit it in the fall of 2022.

NASA hopes that collision will change Dimorphos’s orbit. While that asteroid isn’t a threat to Earth, the mission could prove that redirecting an asteroid is possible with enough lead time.