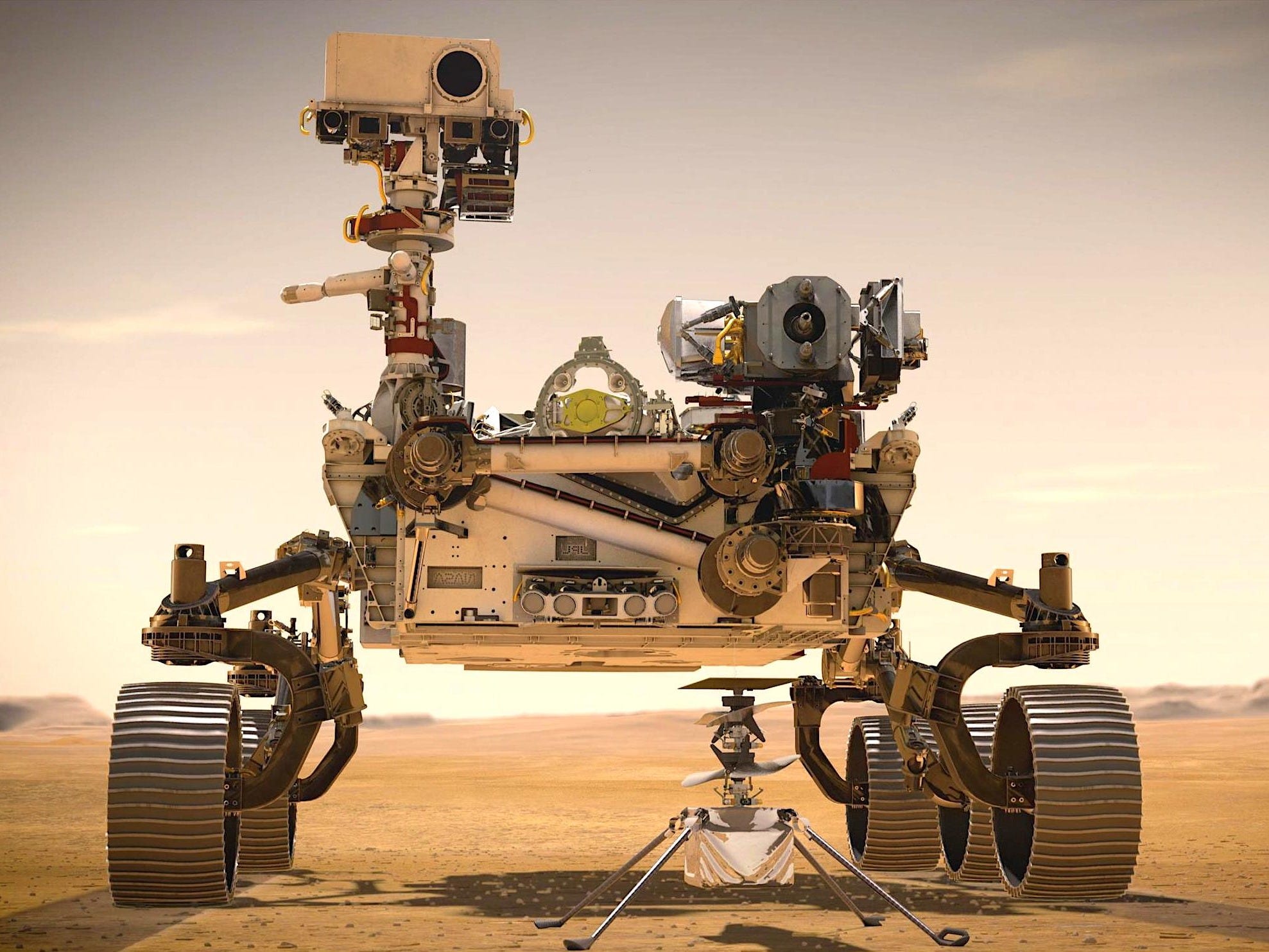 On Thursday, NASA landed its most sophisticated rover yet in an ancient Martian lake bed.

Billions of years ago, Mars was a water world with rivers and lakes. Microbes might have swum in those waters, leaving their imprints behind. on an ancient lake bed called Jezero Crater.

The Perseverance rover is now perfectly poised to hunt for such fossils. After a harrowing plunge to Mars, the $US2.4 billion, SUV-sized robot sent a signal to NASA mission controllers confirming that it had safely touched down in the planet’s Jezero Crater.

More than 3.5 billion years ago, rivers spilled over the edge of that 28-mile-wide crater, into an alien body of water about the size of Lake Tahoe. The rivers probably carried clay minerals into Lake Jezero, and if microbes lived in the water, they could have gotten trapped. That would mean that today, there may be fossil rocks called stromatolites at the bottom of the lake bed, along what used to be the shoreline, or in the dried-up river delta.

This makes Jezero Crater one of the best places in our solar system to search for evidence of alien life.

On Earth, the oldest signs of life are 3.5 billion-year-old stromatolites found in ancient shallow lake beds â€” exactly what Perseverance will look for on Mars. 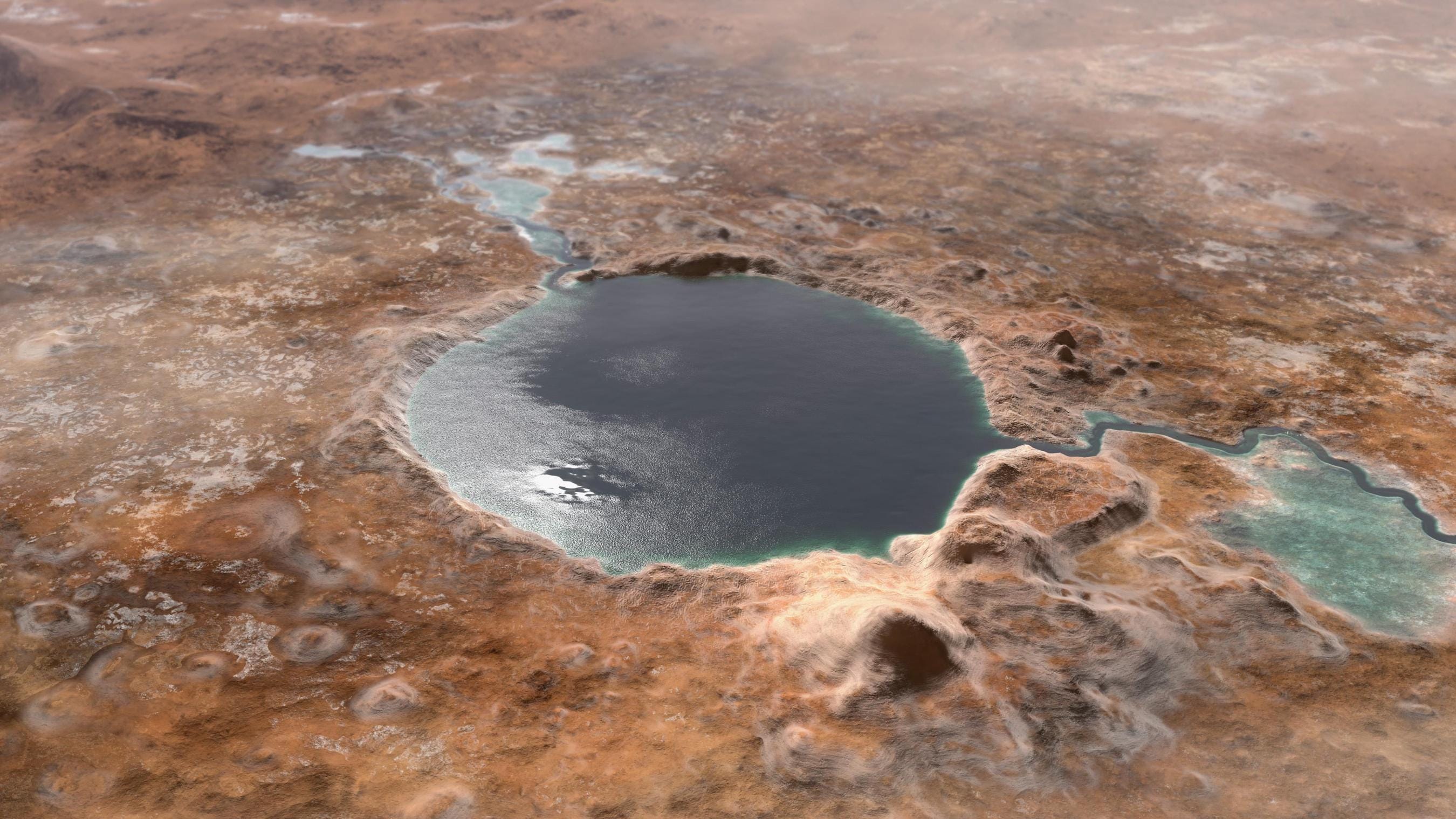 NASA/JPL-CaltechAn illustration of Jezero Crater as it may have looked billions of years go on Mars, when it was a lake.

“This is a tantalising similarity,” Ken Farley, the project scientist for Perseverance, said in a press briefing before the landing. “It would, of course, be a fabulous scientific discovery to find that life existed beyond Earth.”

Perseverance is designed to scour Jezero Crater, collect about 40 samples that could contain signs of ancient microbes, and store them in special tubes so that a future mission can bring them to Earth.

NASA had considered the crater as a destination for previous missions, but its steep cliffs, sand dunes, and boulder fields made it a dangerous place to land. New technologies equipped Perseverance to take on the treacherous terrain.

A journey from the lake bottom to the crater rim

Perseverance landed, as planned, near the cliffs of the fan-shaped river delta â€” a deposit of mud and clay that the river left as it flowed into the lake. 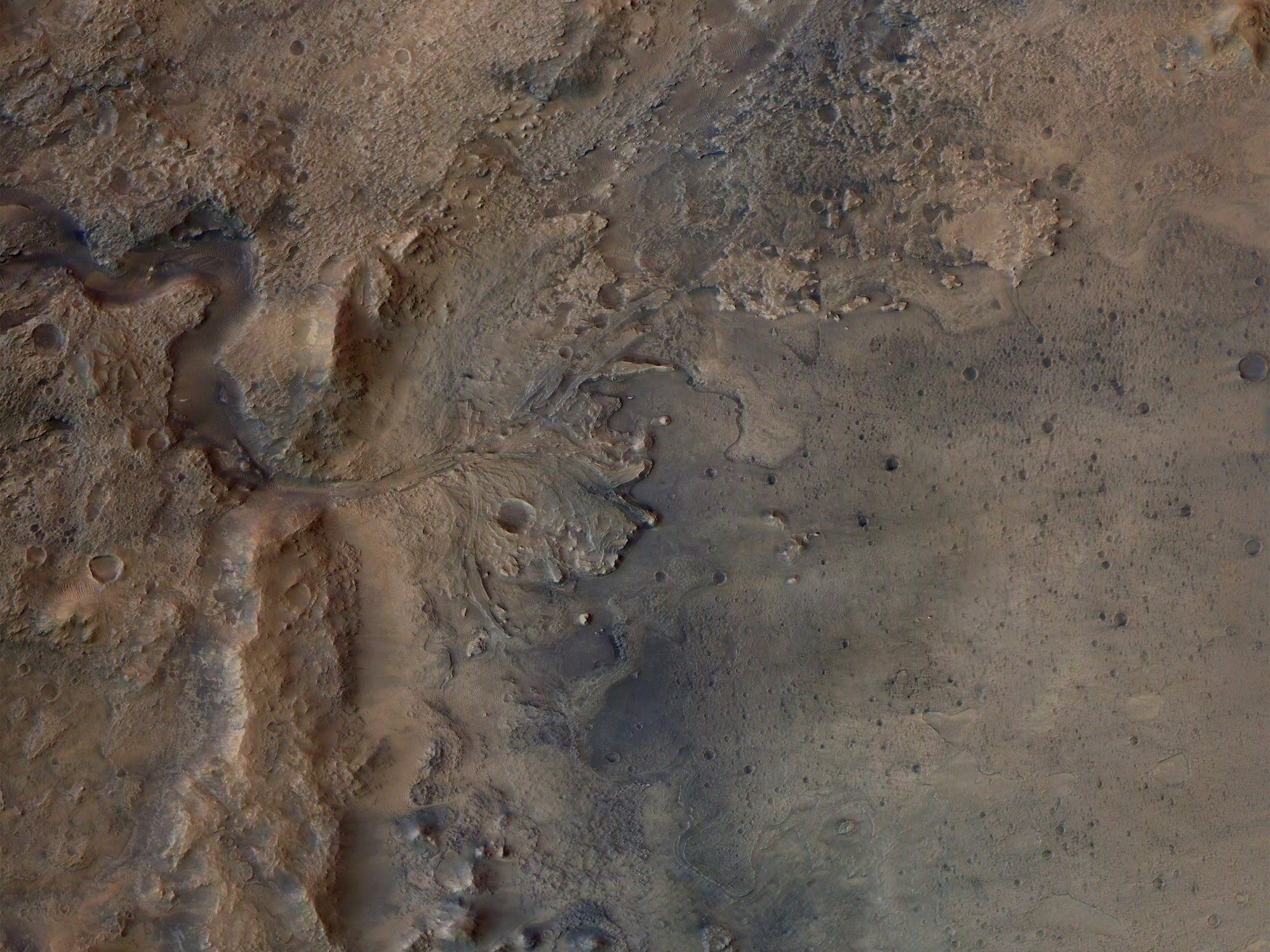 ESA/DLR/FU-BerlinThe remains of an ancient delta at the edge of Jezero Crater, captured by the ESA’s Mars Express orbiter.

In the past, it would take mission controllers a few days to figure out where a rover landed, but Perseverance’s sophisticated navigation system pinpointed its location. In fact, it picked its own landing spot by analysing maps of Jezero Crater and steering away from boulder fields, sand dunes, and cliffs on its way down.

Perseverance ended up about a mile (two kilometers) southeast of the river delta, in a small, flat area. In the map of that landing site below, red indicates a landing hazard. 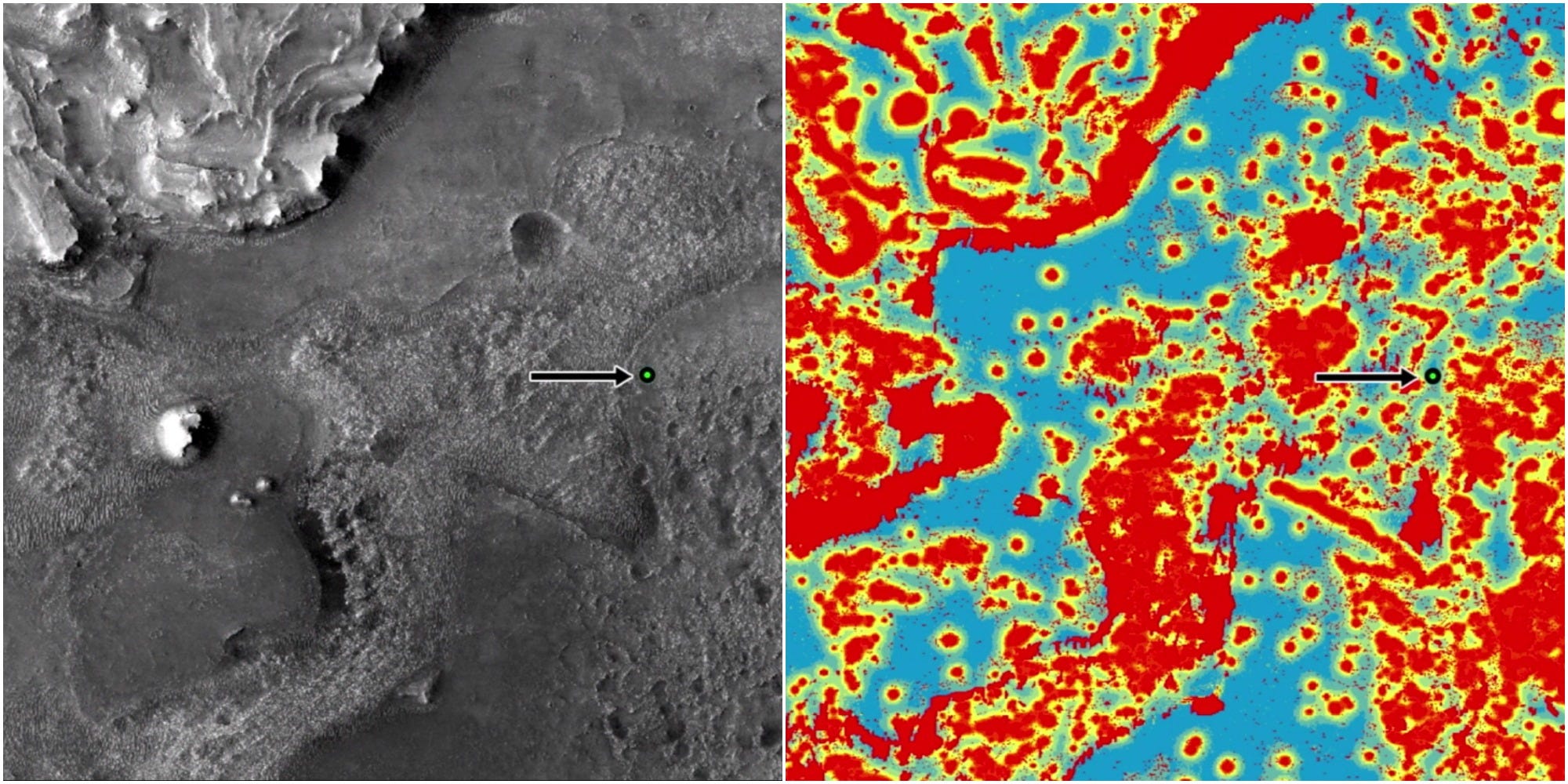 NASAThe Perseverance rover’s landing spot, marked with an arrow on an orbiter image of Jezero Crater (left) and a hazard map showing areas that are hazardous for landing (red), screenshotted from NASA TV.

“You can see that the system managed to find a nice blue spot in the midst of all that red, all that death that’s out there for us. So we found the parking lot and and hit it,” Al Chen, who led the rover’s entry, descent, and landing, said in a press briefing on Thursday.

Now the rover is set to explore the muddy lake bottom for fossils before climbing to the delta.

From there, NASA has carved out a few potential routes for Perseverance that would expose it to the diversified landscape of Jezero Crater. The one shown below is about 15 miles long. 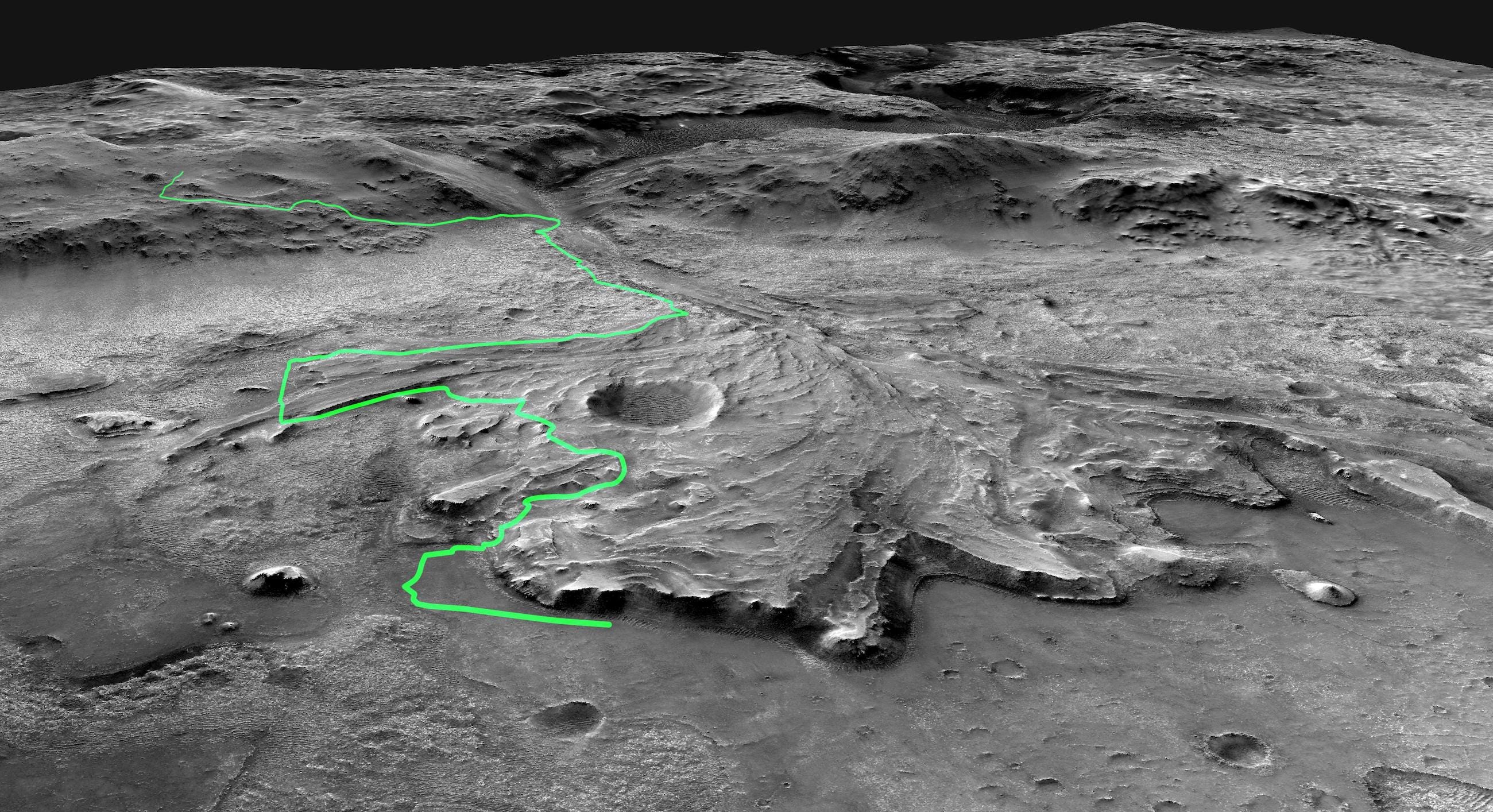 “This is a pathway that connects together all of the different habitable environments that we think existed within this lake and in its surroundings,” Farley said. “This is a long traverse. It will take many years for us to do this. The reason we do this, though, is that this will allow us to come up with the best possible set of samples to be brought back to Earth, to answer the major questions that we have about Mars and about life.”

In the image below, the layer of green between the delta and the crater rim is where scientists think Lake Jezero’s shoreline was. It appears to be rich with carbonates: minerals that are especially good at trapping microbes to form stromatolites. 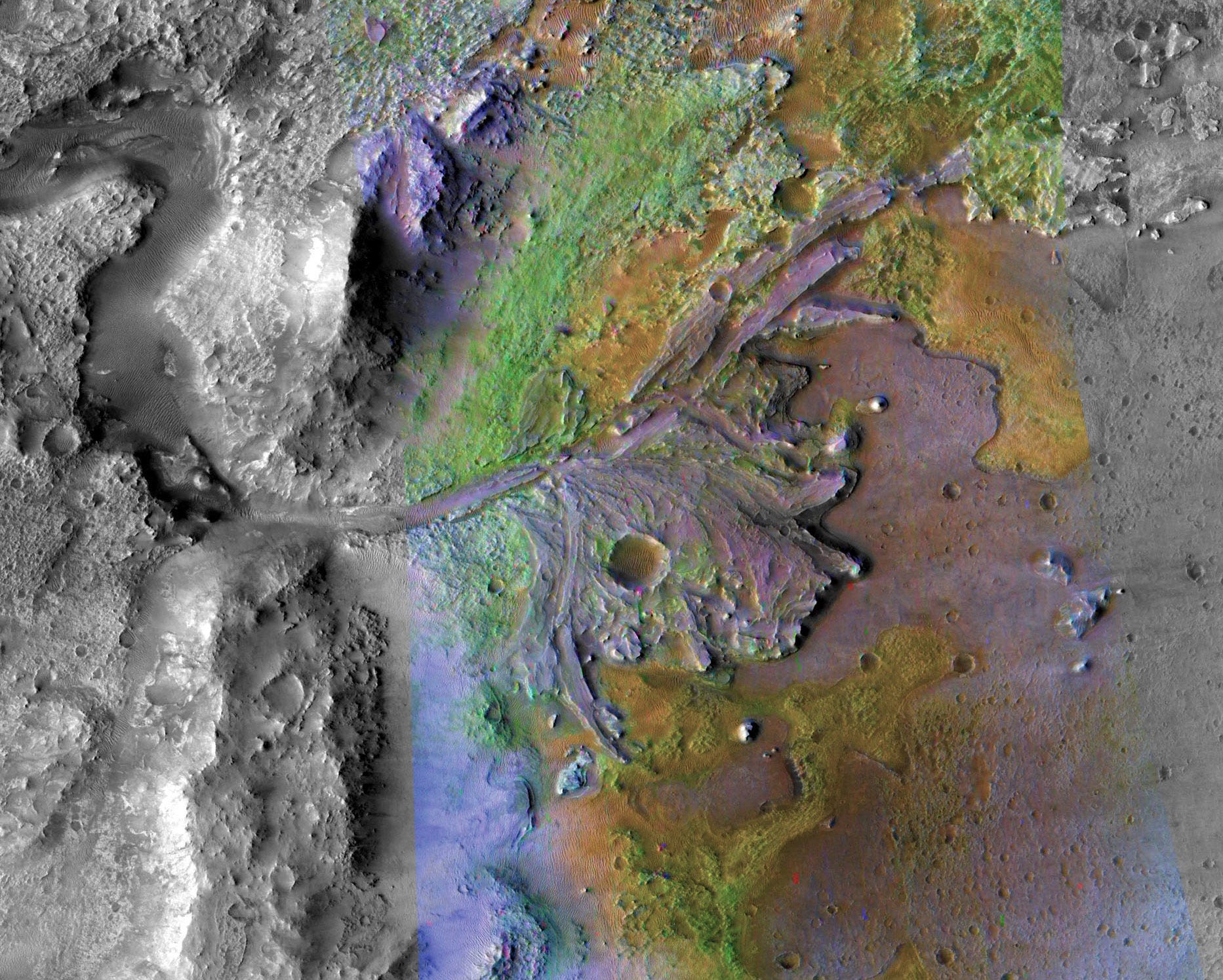 The rover’s primary mission is to look for signs of life, and it lasts one Martian year (two Earth years). If the robot is still kicking when that’s over, its extended mission will involve climbing the 1,600-foot rim of the crater.

Jezero Crater was most likely created when an object (probably a meteorite) collided with Mars. The crash exposed rock layers deep within the planet’s crust. So at the crater rim, Perseverance aims to study these layers to learn more about Martian geology. 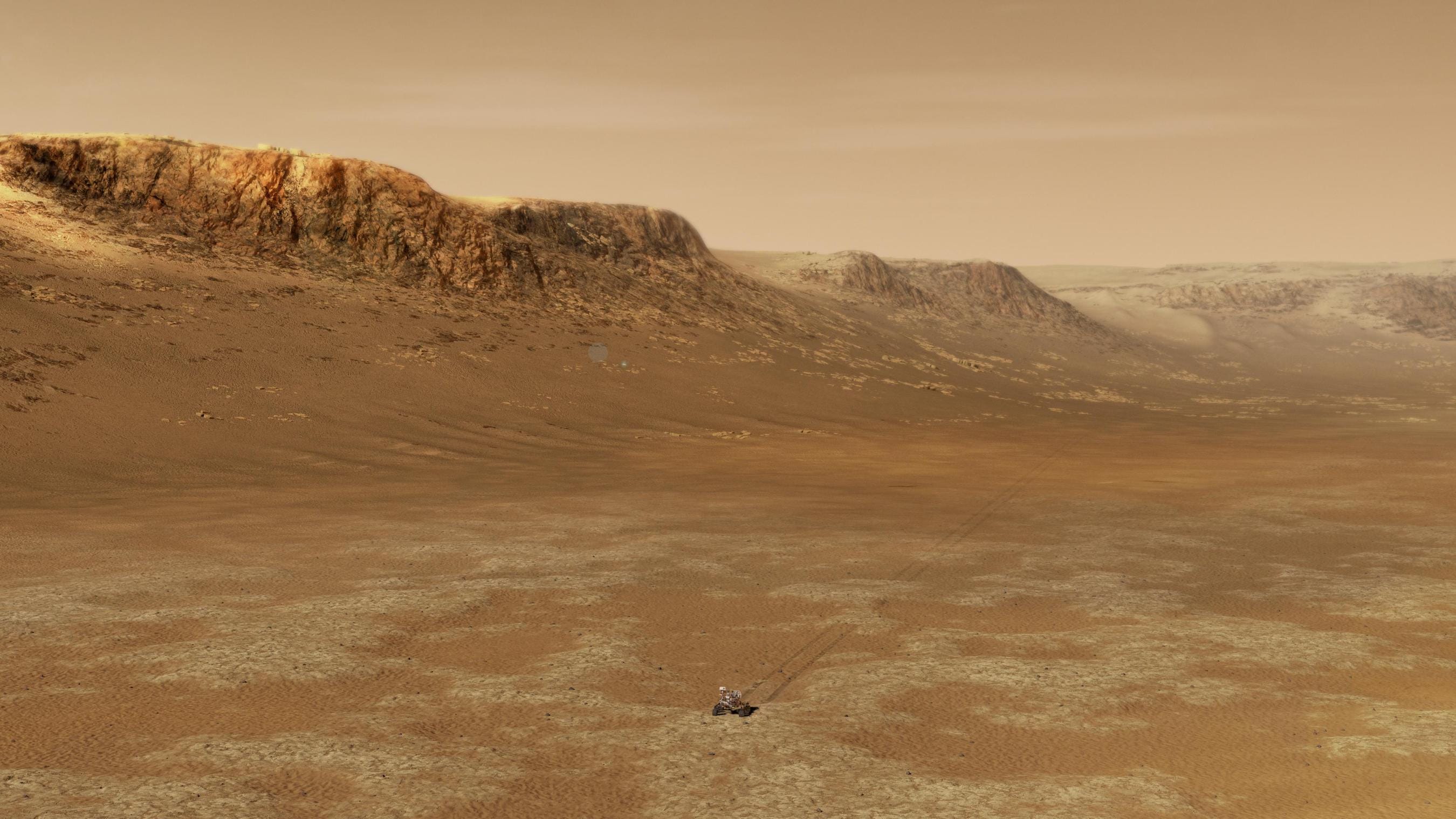 NASA/JPL-CaltechAn illustration of Perseverance beneath the cliffs of Jezero Crater.

The heat from that impact may have even given rise to hot springs, which could have deposited their own minerals that might also hold signs of aliens.

“That’s why we’re so excited about Jezero Crater, because it has so many different ways that it could preserve signs of life,” Briony Horgan, a geologist on the Perseverance science team, said in the pre-landing briefing.

Even if Perseverance finds no fossils, that will be a major nonfinding. To date, every habitable environment on Earth that scientists have examined has hosted life.

“If we do a deep exploration of Jezero Crater with the rover and its instruments … and we find no evidence of life, we will have shown that in at least one place, there is a habitable environment that is not inhabited,” Farley said. “If that’s what we find, it would tell us something important: that habitability alone is not sufficient, that something else has to be present â€” some, perhaps, magic spark â€” that causes life to occur.”

This post has been updated. It was originally published on Feburary 12, 2021.