NASA's Mars helicopter just snapped its first color photo of the red planet. It's expected to fly on Monday. 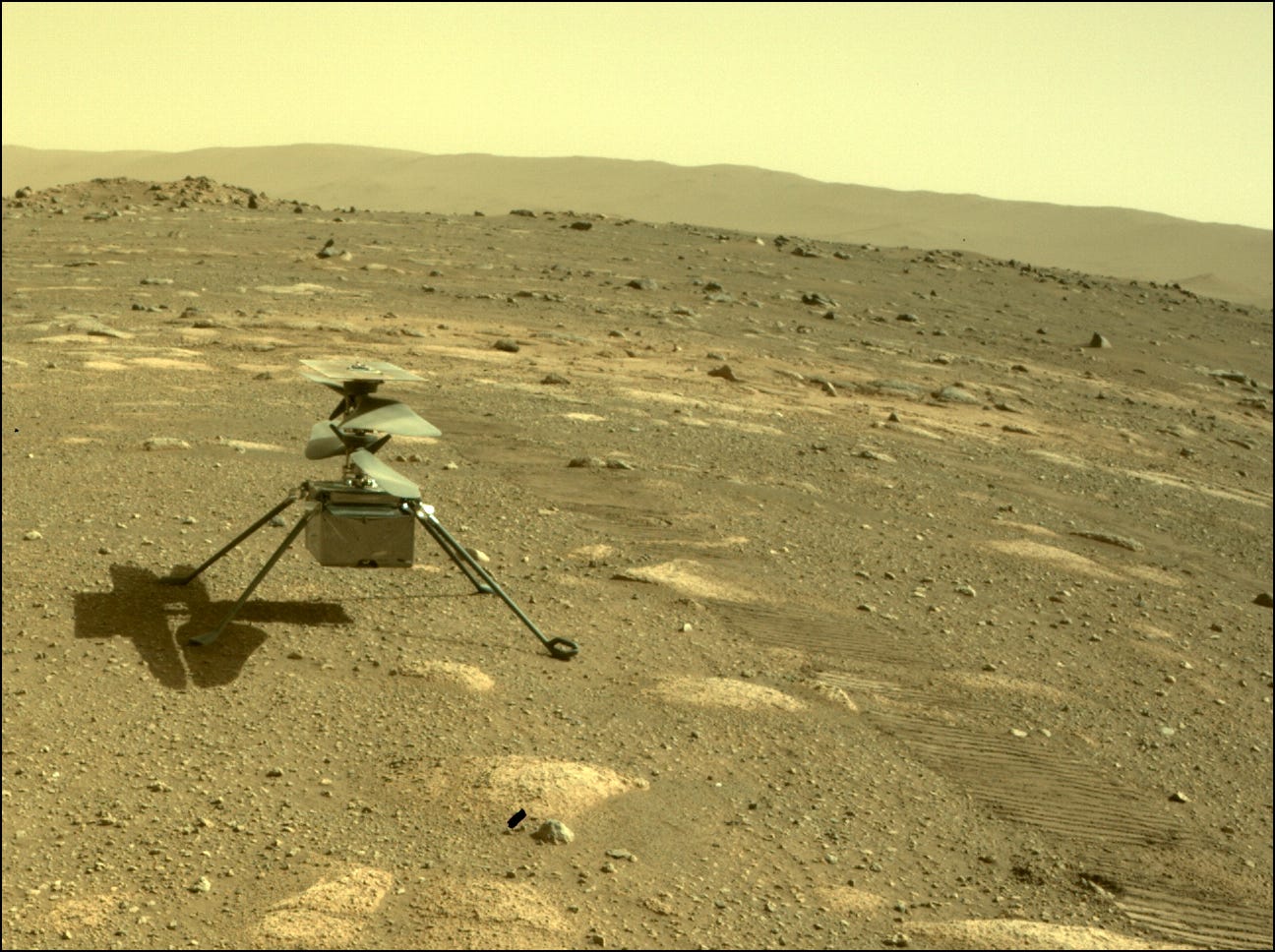 NASA/JPL-CaltechNASA’s Ingenuity helicopter, photographed on Mars by the Perseverance rover on April 4, 2021.

NASA’s Mars helicopter just sent its first postcard back to Earth: a low-resolution, colored photo of the Martian surface.

Ingenuity’s camera snapped the picture (below) after the rotorcraft dropped to Mars’ surface from the underbelly of the Perseverance rover on Saturday. NASA released the image on Monday. 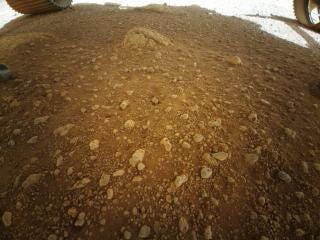 The agency expects better photography from the helicopter once Ingenuity starts to fly. The 2kg drone is scheduled to conduct its first flight early Monday morning Eastern Time, though that initial liftoff will just test whether Ingenuity can successfully get a few feet off the ground, hover for about 30 seconds, and then touch back down.

Already, the helicopter has passed its first crucial test, surviving a night alone on the red planet amid temperatures of -130 degrees Fahrenheit (-90 degrees Celsius). If its first flight goes well, too, the space drone will have a roughly 30-day window to attempt up to five increasingly difficult flights, venturing higher and further each time.

NASA expects Ingenuity to capture plenty of high-resolution images along the way.

Scientists hope Ingenuity will fly for 90 seconds at a time 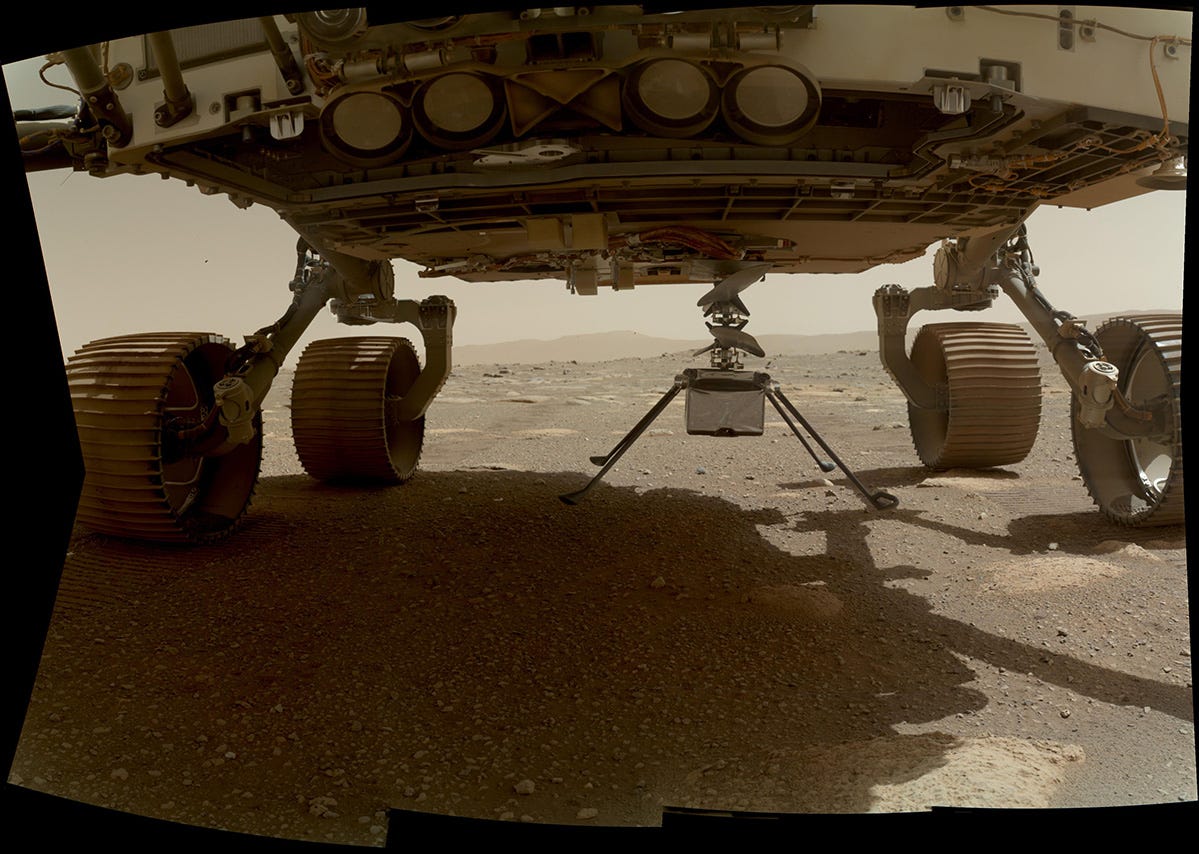 NASA/JPL-CaltechNASA’s Ingenuity helicopter’s four legs extended before it dropped from the belly of the Perseverance rover on March 30, 2021.

Ingenuity was designed as a technology demonstration to investigate whether helicopters and drones could be deployed successfully on other planets. Such aerial explorers could accomplish tasks that rovers and landers can’t.

“That could be for reconnaissance purposes – taking pictures to scout out areas, potential science targets for future rovers, or even future astronauts on Mars,” Håvard Grip, NASA’s chief pilot for Ingenuity, said in a press briefing. “Or it could be carrying its own science instruments into areas where you can’t get with a land-based vehicle.”

Ingenuity left Earth stowed inside the Perseverance rover on July 30, and the two vehicles spent about seven months traveling 293 million miles. After a month in Mars’ Jezero Crater – where Perseverance landed on February 18 – the rover set the helicopter free on Saturday, dropping it the final four inches onto the Martian ground.

Then Perseverance quickly backed off so that Ingenuity’s solar panels could start soaking up sunlight to charge its battery. The temperature change for the the tiny drone was harsh: Inside the rover, heaters had kept it at a toasty 45 degrees Fahrenheit (7 degrees Celsius). Now that the helicopter has pulled through its first frigid nights alone, NASA is preparing it for flight. 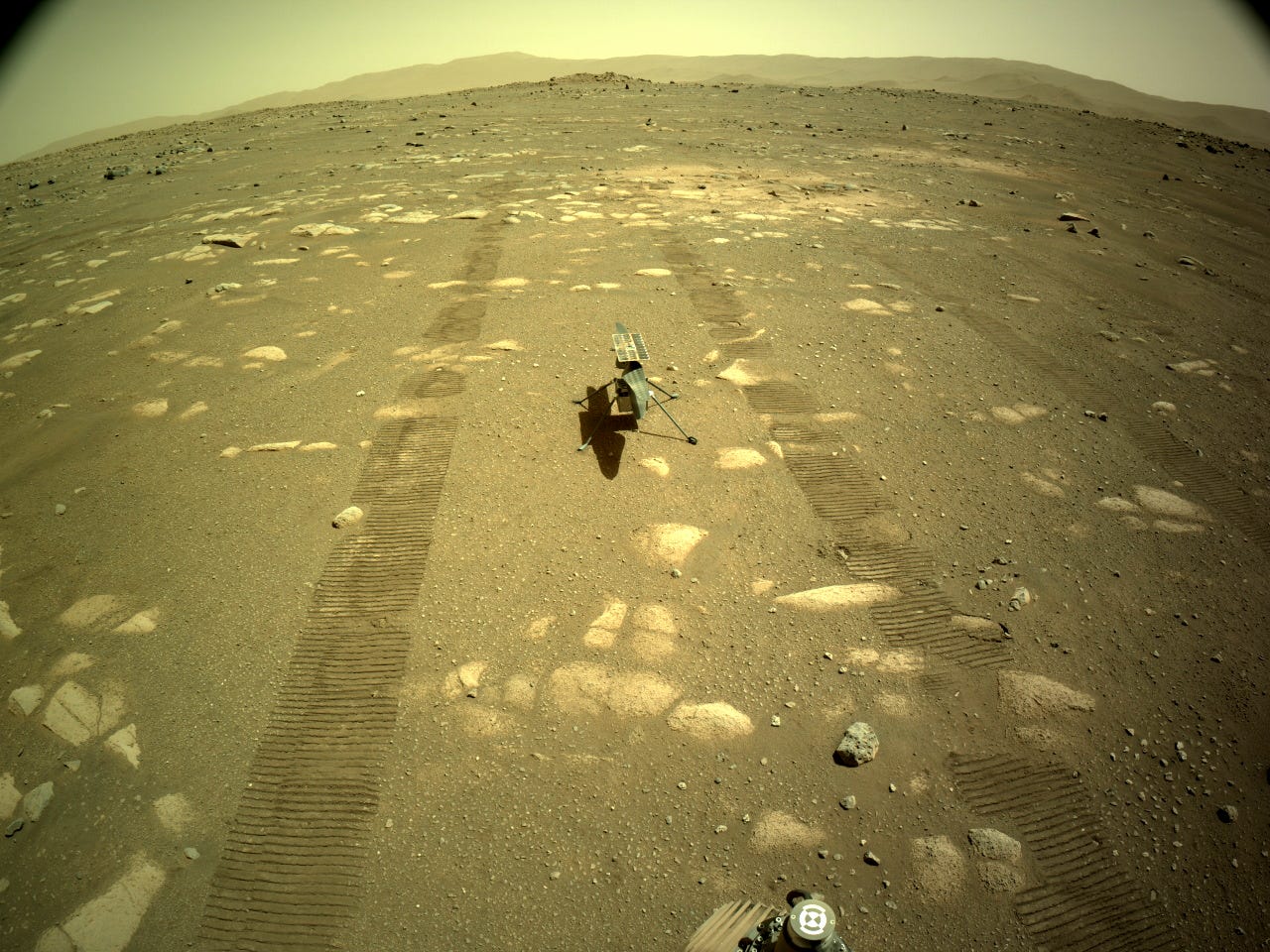 NASA/JPL-CaltechThe Ingenuity helicopter on Mars, sitting where the Perseverance rover dropped it, April 5, 2021.

Mars has an incredibly thin atmosphere – it’s just 1% of the density of Earth’s. So to catch enough air, the four carbon-fiber blades comprising Ingenuity’s two rotors have to spin in opposite directions at about 2,400 revolutions per minute. That’s about eight times as fast as a passenger helicopter on Earth.

Before the liftoff, NASA scientists will prompt Ingenuity to test those blades and make sure the motors that power their spin are staying warm and working well.

“We’re targeting a 90-second average for these flights,” Teddy Tzanetos, one of the lead Ingenuity operators, said during a live question-and-answer session on Monday. 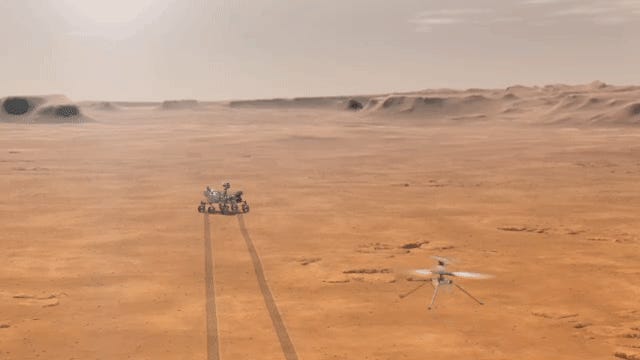 If each step goes well for Ingenuity, its final flight could carry the helicopter over 980 feet (300 meters) of Martian ground.

The Perseverance rover, meanwhile, is currently heading to a spot in the Jezero Crater where it can get an unfettered view of Ingenuity’s airfield and record video of the flights.

After Ingenuity’s work is done, Perseverance is expected to drive toward the cliffs of an ancient river delta next month to begin its search for fossils of ancient alien microbes.