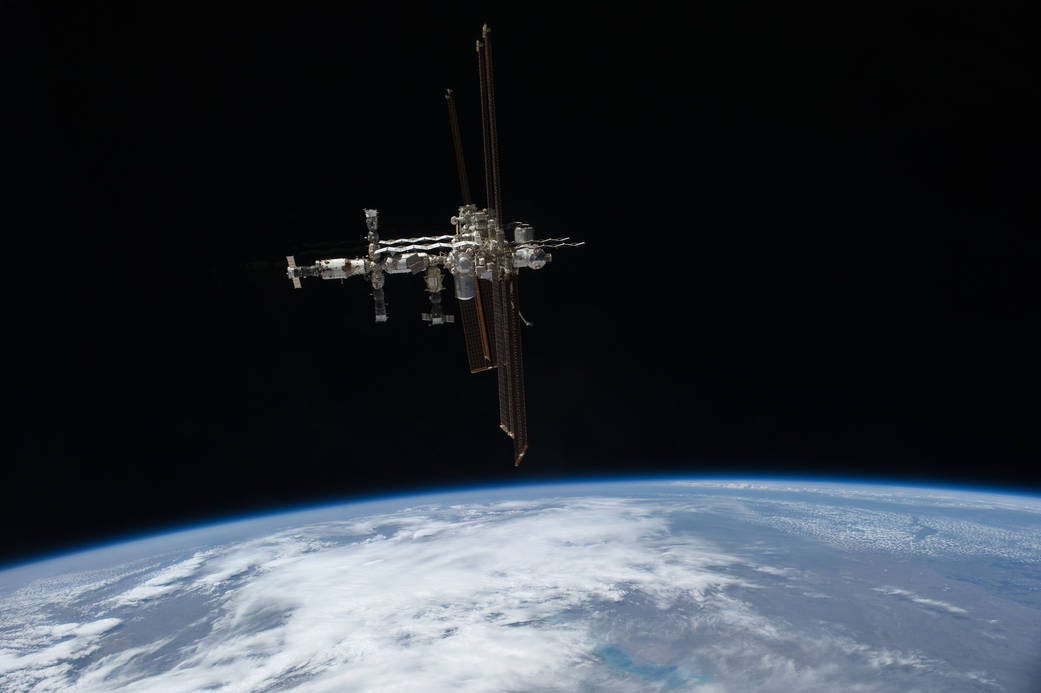 NASA sent a dishwasher-sized box of lasers up to the International Space Station two years ago. The goal: create a bizarre, fifth form of matter that’s not found in nature – the Bose-Einstein condensate.

This type of matter consists of clouds of a few million atoms that have been chilled with lasers inside a vacuum, to temperatures even lower than in interstellar space. At such super-low temperatures, atoms lose their individuality and blob together. This makes it easier for researchers to study the quantum world: a subatomic realm in which everything is smaller than a single atom.

The box of lasers, fittingly, is called the Cold Atom Laboratory.

While Bose-Einstein condensates (BECs) have been made on Earth for 25 years, gravity makes them difficult to study; it yanks them to the ground, making them disappear within fractions of a second.

In space, however, it’s a different story. A study published Thursday in the journal Nature reports that the Cold Atom Lab on the space station has successfully and consistently created BECs in microgravity. That gives researchers opportunities to examine the ultracool matter for longer periods of time than on Earth.

“It was recognised early on that microgravity would come in handy, and going to space would give us a lot of advantages in terms of measurement time,” David Aveline, the lead author of the study and a scientist at NASA’s Jet Propulsion Lab, told Business Insider. 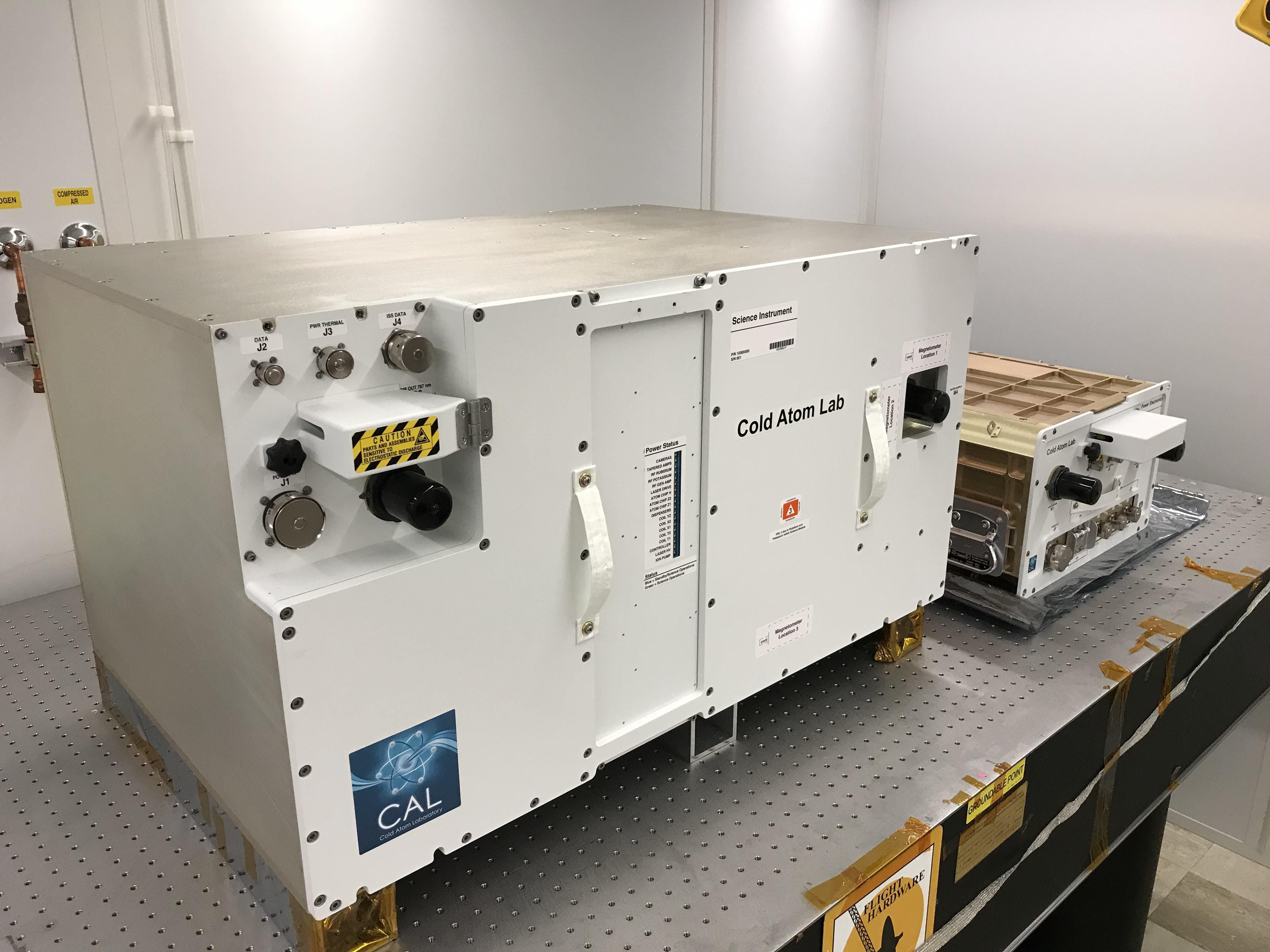 NASA/JPL-CaltechThe Cold Atom Laboratory consists of two standardised containers that were installed on the International Space Station in May 2018.

Ever since the first Bose-Einstein condensate was created in 1995, researchers have been searching for ways to extend the matter’s lifespan beyond a second or two. Some researchers have tried to create their own microgravity environments by throwing a BEC-creating apparatus off a 440-foot tower to achieve free-fall. Some weightless experiments have also been done inside a rocket.

“It’s a lot of effort for taking just a few measurements,” Aveline said.

By contrast, the Cold Atom Laboratory (CAL) has endless microgravity, so it can collect data for years.

“We’re getting to make BECs on a daily basis, for many hours a day,” Aveline said. “CAL is completely remote-controlled. We’re running it from computers on the ground, literally inside our living rooms.” 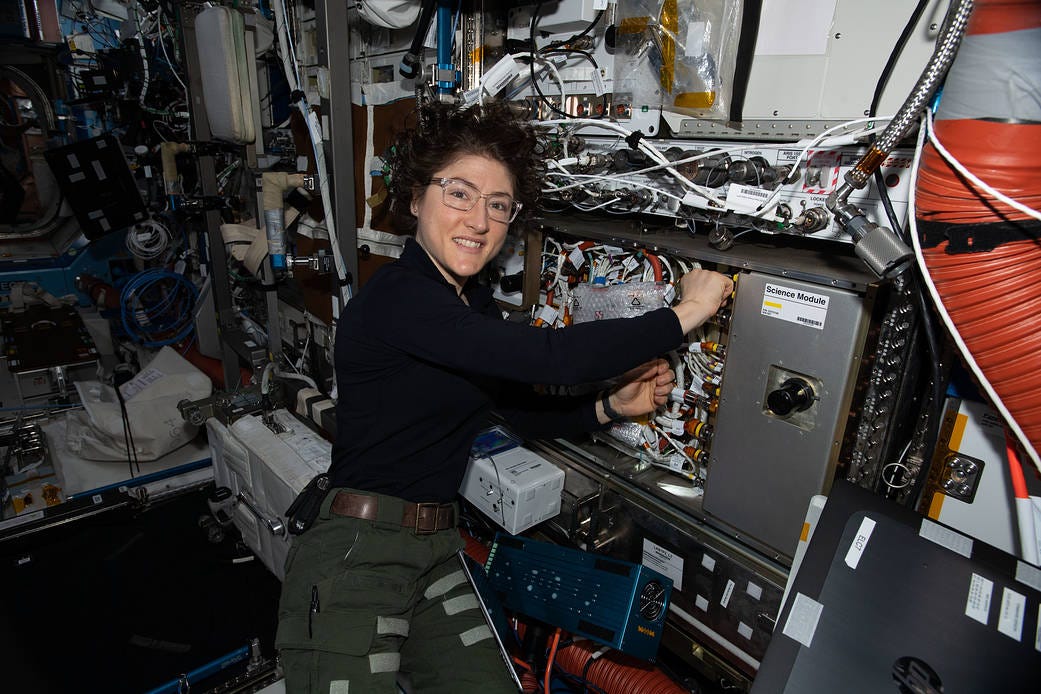 Originally, NASA’s goal was to have CAL function for one year before it would need replacement parts, Aveline said. But thanks to astronauts like Christina Koch who check up on it and occasionally update its hardware, the floating laboratory just passed its two-year mark in space.

Bose-Einstein condensates teach us about the quantum world

CAL uses lasers and magnets to chill atoms to within 1 10-billionth of a degree above absolute zero (minus 459.67 degrees Fahrenheit, or minus 273.15 degrees Celsius).

Typically, atoms are arranged in a particular order to create matter like solids, liquids, and gases. But Albert Einstein and physicist Satyendra Nath Bose predicted in 1924 that if atoms could be cooled enough, they’d lose their individuality. That would lead them to form a lump of mass about 1 millimetre across that behaves as one entity. This is a BEC, sometimes known as a superfluid. 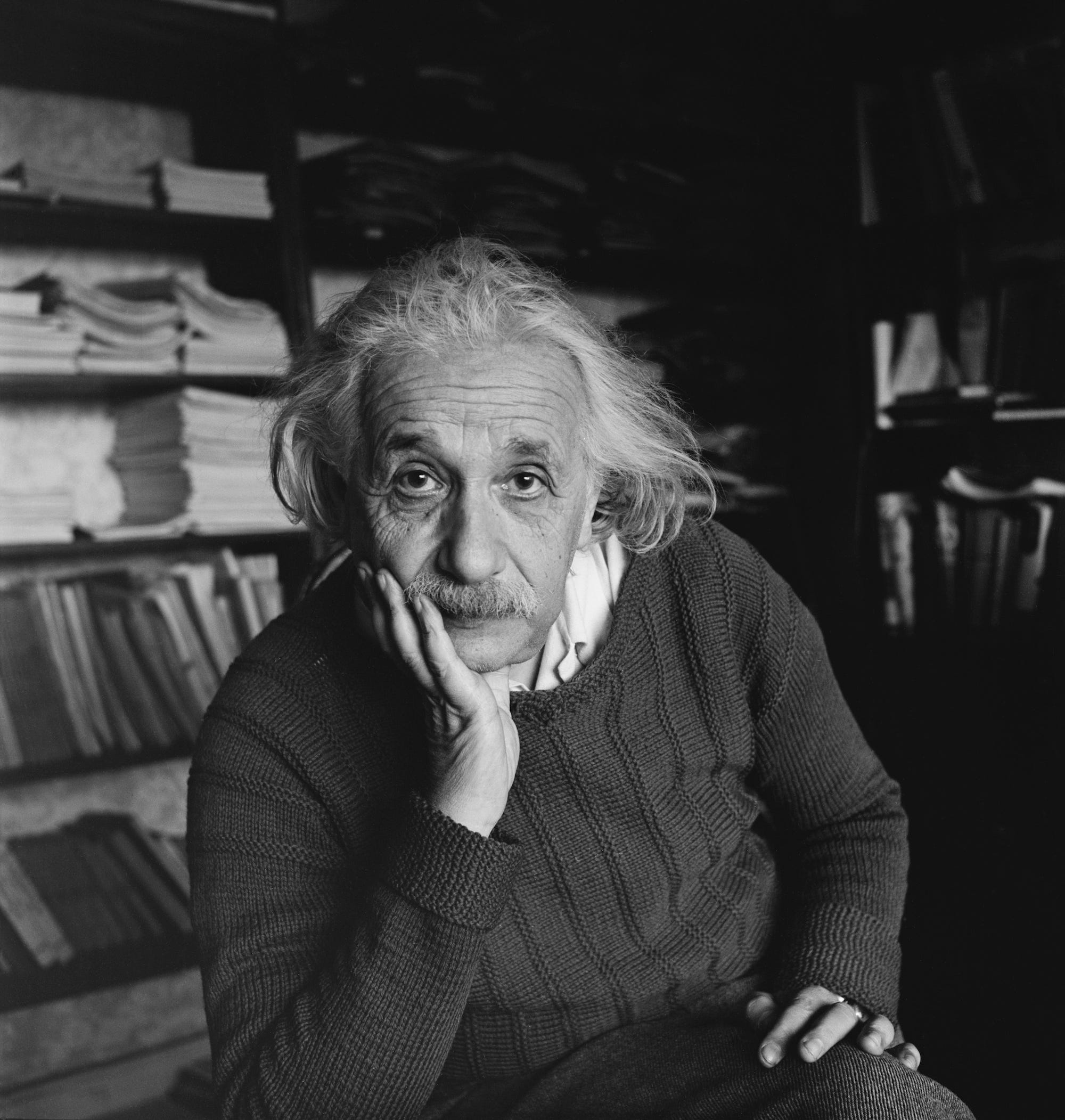 The reason scientists care about BECs is because they bridge the gap between the world we can see – which is governed by classical physics – and the subatomic world, in which quantum physics reigns.

“They’re like the holy grail” of quantum physics, Aveline said.

Quantum physics describes the behaviour of the smallest things in the universe. According to its laws, tiny particles like electrons could be in many places at the same time. So physicists describe those electrons using probabilities that show how likely it is an electron is positioned in a certain configuration at a given time.

The atoms in BECs follow quantum laws, but because they have blobbed together, they’re large enough to be observed with a microscope – which enables scientists to measure them and observe their behaviour. 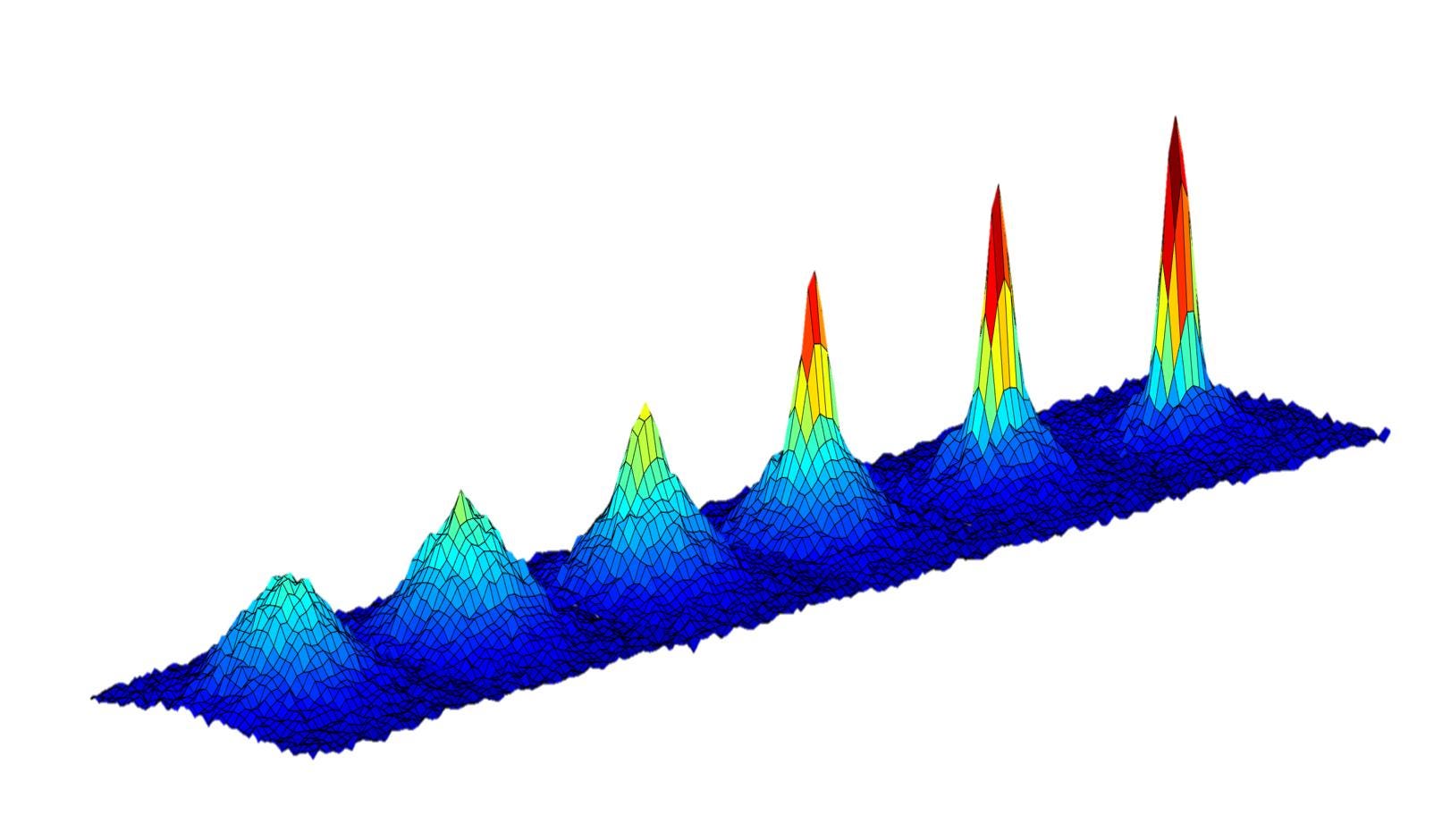 NASA/JPL-CaltechThis graph shows the changing density of a cloud of atoms as it is cooled to lower and lower temperatures (going from left to right) approaching absolute zero. The emergence of a sharp peak in the later graphs confirms the formation of a Bose-Einstein condensate.

What CAL’s experiments can teach us

One piece of new hardware that Koch installed into CAL is an atom interferometer, an instrument that uses BECs to measure changes in gravity across a planet’s surface.

“Analysing the gravitational field of our planet can tell us a lot about its structure (is water or stone or oil below?), and analysing its variation can teach us about processes going on (how much does the water level of the oceans rise?),” Maike Lachmann, a physicist at Leibniz University, told Business Insider in an email.

The applications for this type of measurement are huge, according to Lachmann and Aveline – it can help scientists understand what’s happening under Earth’s surface and also map moons and other planets. 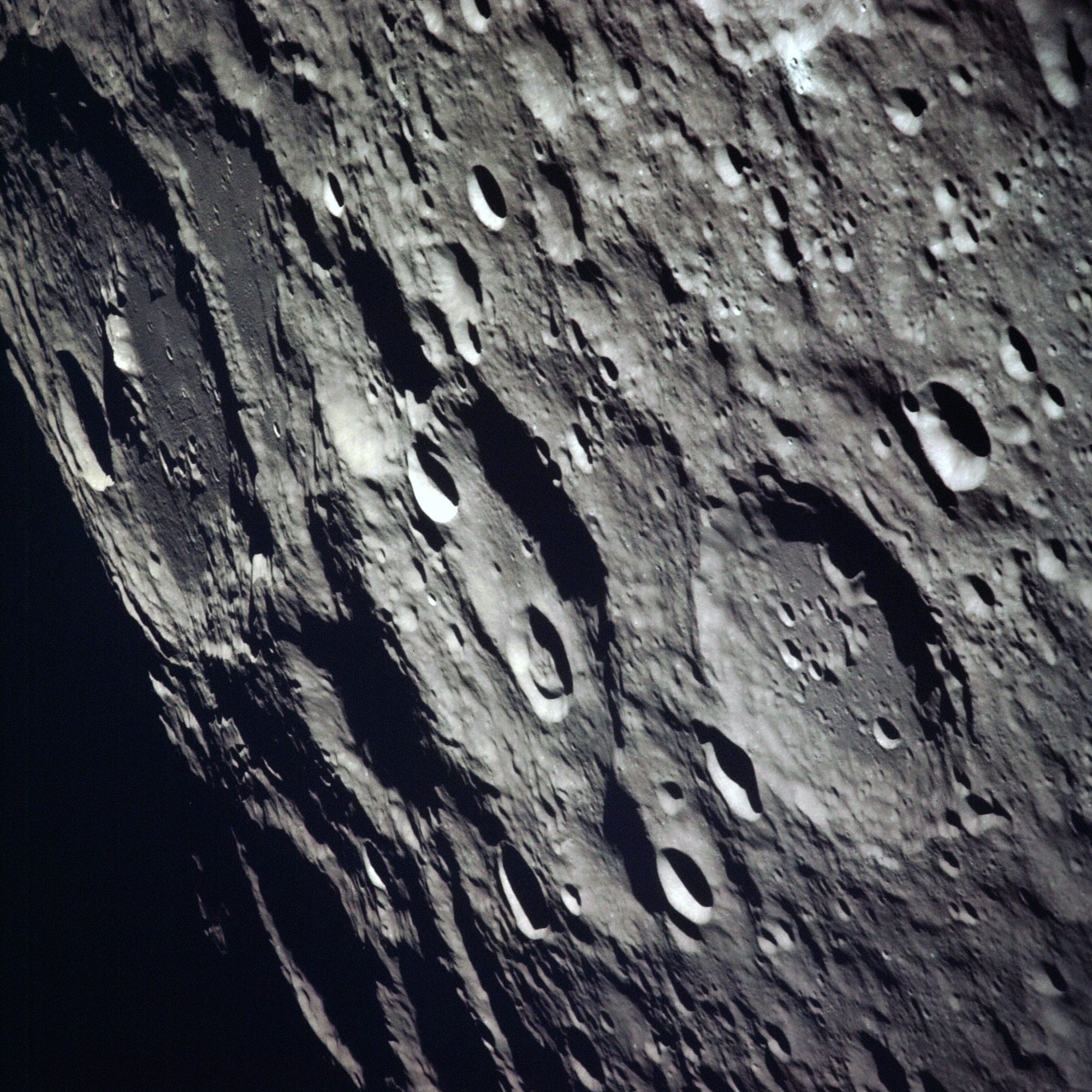 NASA via Project Apollo Archive/FlickrThe lunar surface as seen from the Apollo 13 spacecraft.

Additionally, physicists are looking into using atom interferometry to measure gravitational waves or other potential sources of energy in the universe, like dark energy.

Dark energy is the force that’s making space expand; it accounts for 70% of the universe. (The remaining chunk is 25% dark matter – an unseen particle that exudes a large gravitational force – and 5% normal matter, which makes up everything we see.)

Some researchers suspect that dark energy and dark matter are derived from not-yet-seen particles called axions and solitons. A study last month suggested that BECs could be used to detect those axions.

Other research from 2015 and 2016 used BECs to probe for different possible sources of dark energy.

Measuring dark energy is critical, since scientists think it could be responsible for accelerating the universe’s expansion – pushing galaxies apart at an ever-faster rate.

A study published last year found that the universe is expanding 9% faster than scientists predicted it should be – a finding one Nobel-prize winner said “may be the most exciting development in cosmology in decades.”