'Real men wear masks': Nancy Pelosi says Trump should 'be an example to the country' 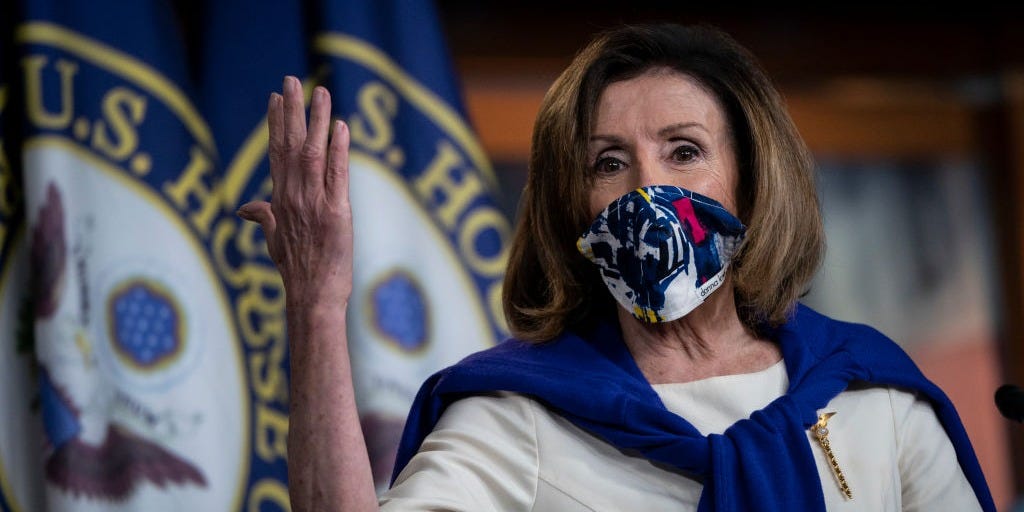 Drew Angerer/Getty ImagesSpeaker of the House Nancy Pelosi (D-CA) speaks during a press conference to mark the anniversary of the House passage of the 19th Amendment and women’s right to vote, on Capitol Hill May 21, 2020 in Washington, DC.

House Speaker Nancy Pelosi said Sunday that a mandate for Americans to wear masks was “long overdue,” but such an order has been held off so as to not “offend” President Donald Trump.

Pelosi appeared on ABC’s “This Week” to make her latest criticism of Trump’s response to the novel coronavirus pandemic, which has worsened across several states in recent weeks after he hadn’t been pictured wearing a mask in the three months since outbreaks began.

“My understanding is that the Centres for Disease Control has recommended the use of masks but not demanded, required it because they don’t want to offend the president,” Pelosi told host George Stephanopoulos.

Pelosi’s comments come two days after she called Trump “cowardly” for not wearing a mask in public, at large campaign rallies, and other high-profile appearances, Insider previously reported.

“The president should be an example,” Pelosi said. “Real men wear masks, be an example to the country, wear a mask.”

“It’s not about protecting yourself, it’s about protecting others,” Pelosi said, pointing to a growing body of research that suggests face masks effectively prevent coronavirus transmission.

JUST IN: @GStephanopoulos: “Is it time to mandate the wearing of masks across the country?”

“Definitely long overdue for that,” Speaker Nancy Pelosi says, adding that the CDC recommended use of masks but did not mandate it as to “not offend" Pres. Trump. https://t.co/9W8J3L0BVW pic.twitter.com/arJWcEsIPj

Despite the clear science that could encourage Americans to face masks, the issue has become mired in a political debate, with some Americans speaking out to claim the personal protections infringe on their rights, and the Trump campaign thwarting hygienic protections at a recent rally.

Lawmakers like Republican Sen. Marco Rubio and public health experts ramped up their calls for Americans to wear masks as states like Florida, Texas, California, and Arizona saw caseloads spike throughout June. But beyond local governments and businesses across the country announcing mandates for Americans to cover their faces while in public, there has been no federal action requiring masks nationwide.

Those states’ concerning climb in new cases culminated in the US recording on June 26 more than 40,000 coronavirus cases in a single day for the first time.

The US currently has more than 2.5 million coronavirus infections since the start of the outbreak and more than 125,000 deaths,according to data from Johns Hopkins University.