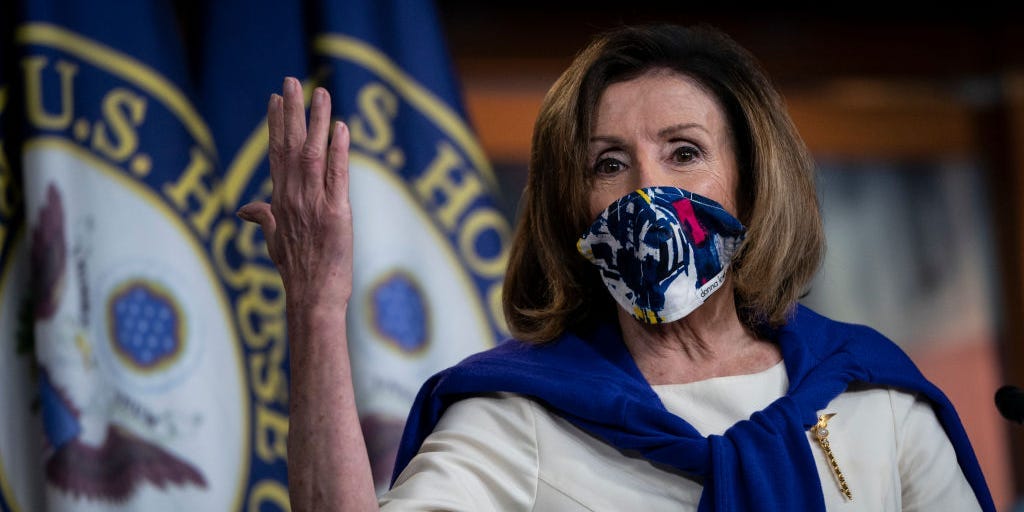 Drew Angerer/Getty ImagesHouse Speaker Nancy Pelosi at a press conference on May 21.

During an appearance on “The Situation Room,” Blitzer grilled Pelosi on why Democrats hadn’t accepted the Trump administration’s $US1.8 trillion offer. There’s been little headway on another relief bill since Congress pumped over $US3 trillion in aid during the spring. Republicans and Democrats disagree on how much more government assistance is needed.

“There are Americans who are being evicted from their homes, they can’t pay the rent. Many Americans are waiting in food lines for the first time in their lives,” Blitzer said early in what became a contentious interview. “Can you look them in the eye, Madame Speaker, and explain why you don’t want to accept the president’s latest stimulus offer?”

CNN’S @wolfblitzer presses House Speaker Nancy Pelosi on President Trump’s $1.8 trillion stimulus proposal and why she doesn’t agree with it. “They do not share our values,” Pelosi says. pic.twitter.com/AVHKZH21NA

Pelosi responded: “I hope you’ll ask the same question of Republicans about why they don’t really want to meet the needs of the American people.”

Pelosi has been in talks with the White House and Treasury Secretary Steven Mnuchin to negotiate a middle ground between House Democrats and the Trump administration, but the conversations over several weeks have yet to produce a bipartisan package.

Blitzer cited criticism from Democratic Rep. Ro Khanna and the former Democratic presidential candidate Andrew Yang, with whom the CNN host spoke with on Monday about the offer. “The only thing that’s keeping us from passing it is politics,” Yang said in response to the delays.

“Madame Speaker, I’m asking you this because so many people are in desperate need right now,” Blitzer said.

He asked why Pelosi had not yet reached out to President Donald Trump personally to negotiate and provide relief from the fallout of the pandemic sooner. She responded that they hadn’t talked in a year.

“What makes me amused, if it weren’t so sad, is how you all think that you know more about the suffering of the American people than those of us who are elected by them to represent them at that table,” Pelosi said.

She called it “unfortunate” that Democrats “do not have shared values with this White House” and that “we have to fight with them to get them to address the coronavirus crisis.”

“Because they have said it was a hoax, it was magical, it was miracle, it was going to be cured,” she said. “It hasn’t, and that’s why we find ourselves in this situation.”

While closing the interview, Blitzer said he had respect for Pelosi as well as her critics Yang and Khanna.

Blitzer replied: “It’s not about me. It’s about millions of Americans who can’t put food on the table, who can’t pay rent, who are having trouble getting by,” as Pelosi interrupted by saying, “And we represent them.”

Chances of an aid bill appear slim before the election

The CNN interview came with the prospects of a bill passing before the election appearing slim. The White House plan includes another round of $US1,200 direct payments among other measures that both parties agree is needed to prop up the economy.

Democrats rebuffed the administration’s offer over the weekend, arguing it didn’t provide enough aid to state and local governments and unemployed people. Senate Republicans also fiercely criticised the proposal for its large spending levels and other tax-related measures.

In a letter to House Democrats, Pelosi wrote on Tuesday: “Tragically, the Trump proposal falls significantly short of what this pandemic and deep recession demand.”

Majority Leader Mitch McConnell also said Tuesday that Senate Republicans were preparing to vote on a $US500 billion slimmed-down coronavirus relief package shortly after reconvening on October 19. But the move puts GOP senators at odds with Trump, who is stepping up his calls for a broad aid bill.