A popular beauty YouTuber known for her realistic special effects makeup apologised to her 2 million Instagram followers after her former friend accused her of racist microaggressions and of “using” YouTube celebrities James Charles and Jeffree Star.

Glam&Gore, also known as Mykie, has over 4 million subscribers on YouTube, where she posts gory, oftentimes Halloween-inspired makeup looks. She collaborated with controversial beauty guru Jeffree Star in 2018 and James Charles in 2019, but her former friend Spankie Valentine says Mykie bad-mouthed Star and Charles behind-the-scenes and seemingly negatively attributed their success to them being gay.

In an hour-long exposÃ© video uploaded to YouTube, Valentine (who also goes by Swoop) shared screenshots she says are of private texts sent between her and 30-year-old Mykie, whose real name is Lauren Mychal. In one message, Mychal wrote, “It’s tough because from my perspective I feel like you won’t get handed s— right now (on youtube specifically) UNLESS you’re a minority in some sense of the word.” 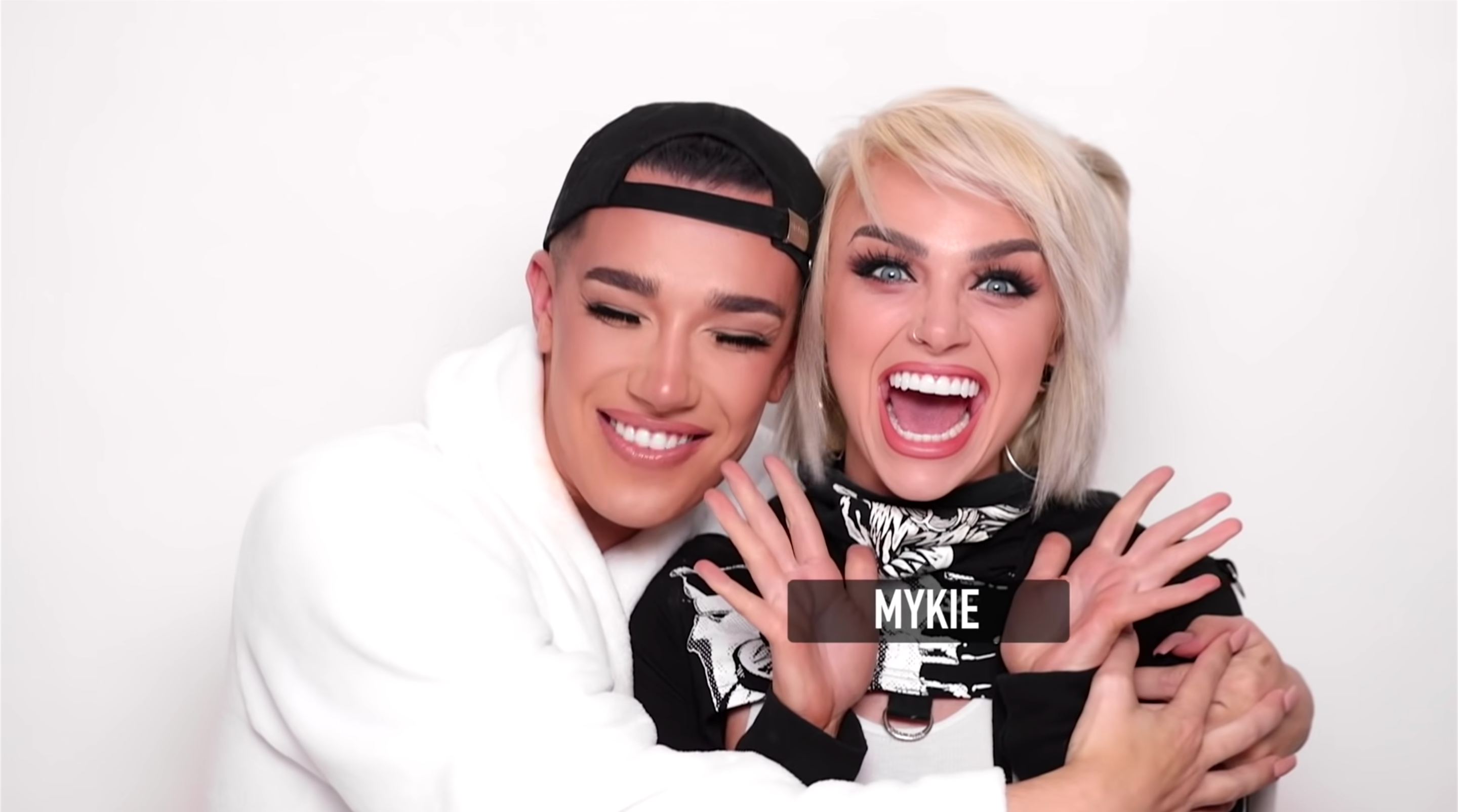 YouTube/James CharlesGlam&Gore transformed James Charles into the character from ‘The Nun’ in a video on his channel.

Mychal apologised in a lengthy Instagram story, writing “I’ve been incredibly tone deaf” and “A lot of my insecurities and jealousy issues came through in deplorable ways.”

“I looked for any upside I thought I could find,” Mychal wrote, attempting to explain why she told Valentine she thought YouTube favoured minorities. While two of the top beauty YouTubers â€” Charles and Star â€” are gay men, people of colour, especially Black men, have historically been left out of the top ranks of beauty influencers. There are no Black men in the beauty community with more than 1 million subscribers. 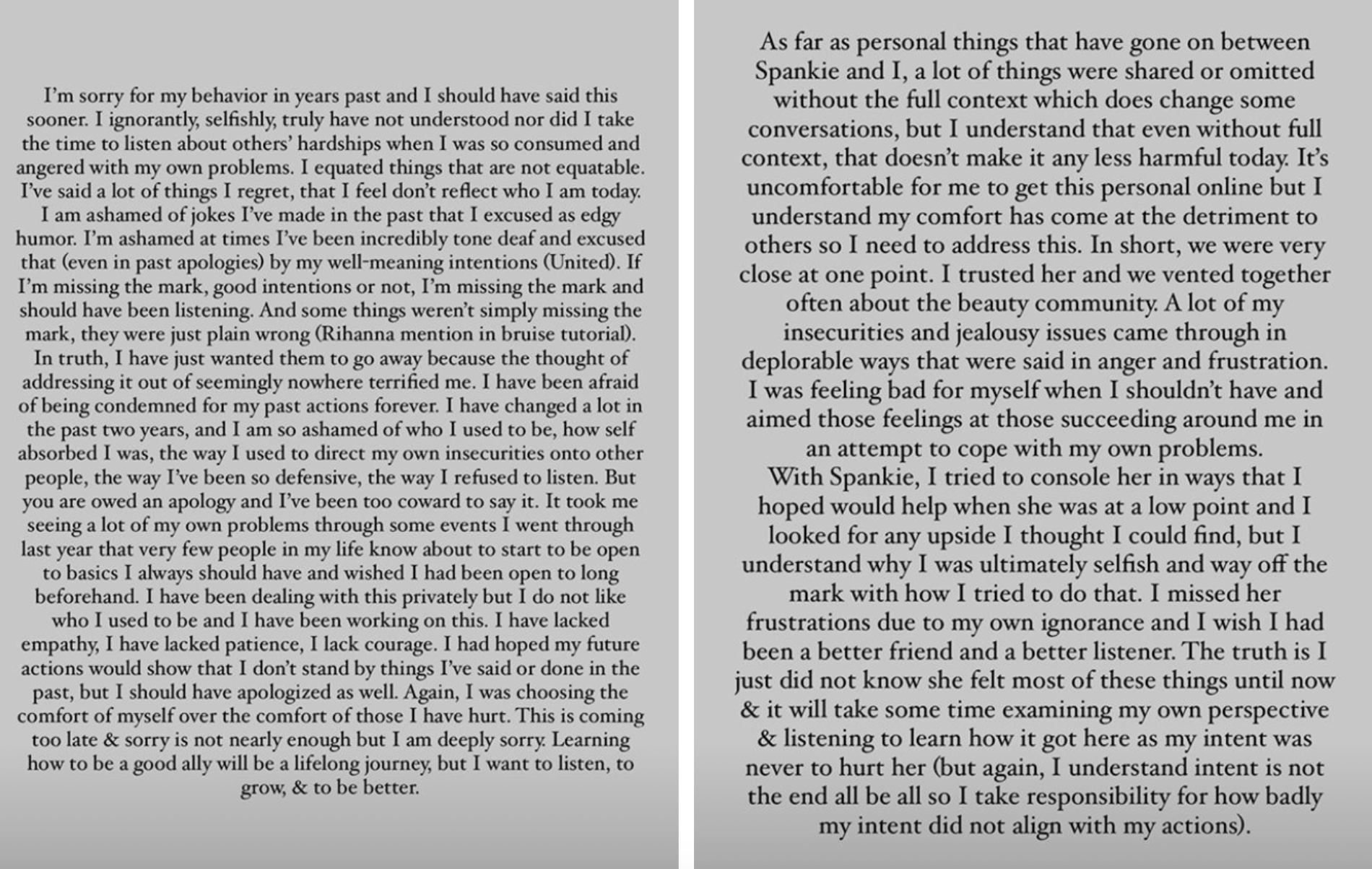 Instagram/@mykieScreenshots of the apology Mychal shared on her Instagram story.

Mychal also claimed some of the text messages Valentine shared were “without the full context” of the conversation, but she apologised to Valentine and the LGBTQ and BIPOC (Black, indigenous, and people of colour) communities. She also shared another screenshot of a text she sent Valentine in June 2020, the last time the two interacted, that says she is also a survivor of sexual assault. 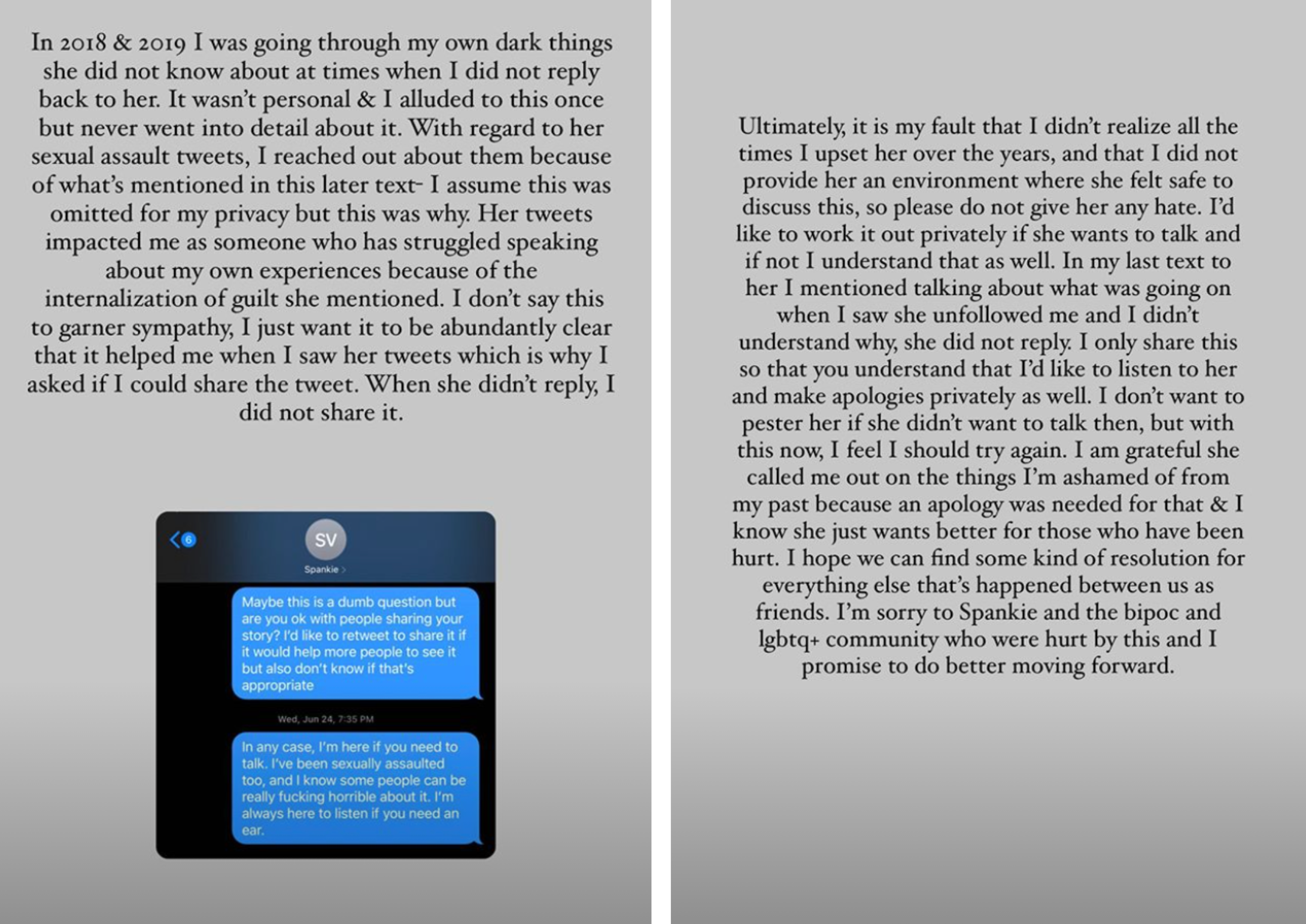 Instagram/@mykieMychal says she is also a survivor of sexual assault.

Valentine described Mychal as a ‘narcissist’ who made racist microaggressions, including 2 offensive old videos

Valentine is a smaller beauty influencer and YouTuber with over 200,000 subscribers. In her apology, Mychal said she and Valentine “were very close” when Valentine says Mychal acted microaggressive toward other YouTubers and marginalised groups in front of her.

Valentine accused Mychal of racist and homophobic microaggressions, which she defined as “Everday verbal & nonverbal insults, which come off as hostile, derogatory prejudices, aimed at marginalised groups.”

Valentine said Mychal attacked other YouTubers in private while appearing on their channels and acting friendly in public, particularly Charles, Star, and the embattled musician Gabbie Hanna. Valentine shared screenshots she says are texts from Mychal about Charles, saying, “I don’t understand the fascination with him at all” and “he’s too immature to give a kid credit.”

Valentine said that Mychal texted her “f— you dude” about Charles as Mychal was texting Charles to coordinate the video they did in 2019 for Charles’ YouTube channel. She also said Mychal told her that she wouldn’t let Star appear on her channel because he was “too controversial,” but that Mychal appeared on Star’s channel in 2018.

At the beginning of their friendship, Valentine said she witnessed microaggressions from Mychal like Mychal and another, unnamed white influencer saying cultural appropriation wasn’t racist while on a brand trip, along with Mychal saying she had been the victim of racism before.

She included screenshots of Mychal’s past tweets, including a 2015 tweet that says “I’ve had several WOC tell me they don’t want me to help them at MAC bc I’m white and can’t help them,” and a 2017 tweet that says “Must be drinkin the ‘everything’s racist’ kool-aid.”

Valentine also brought up two of Mychal’s old, since-removed videos. In a 2014 tutorial that showed viewers how to fake bruises with makeup, Mychal called the look “Rihanna-inspired,” referencing the singer’s 2009 assault. In 2017, Mychal was criticised for a video where she replicated the bloody face of an American Airlines passenger who was forcibly removed from a flight on camera.

The specific incident Mychal addressed in her apology revolved around her response to Valentine’s disclosure that she was feeling depressed, in part because of her experiences with racism. Mychal seemingly replied, “it’s tough for me to weigh in with practical advice there because from my own perspective I feel the same thing from the opposite side.” 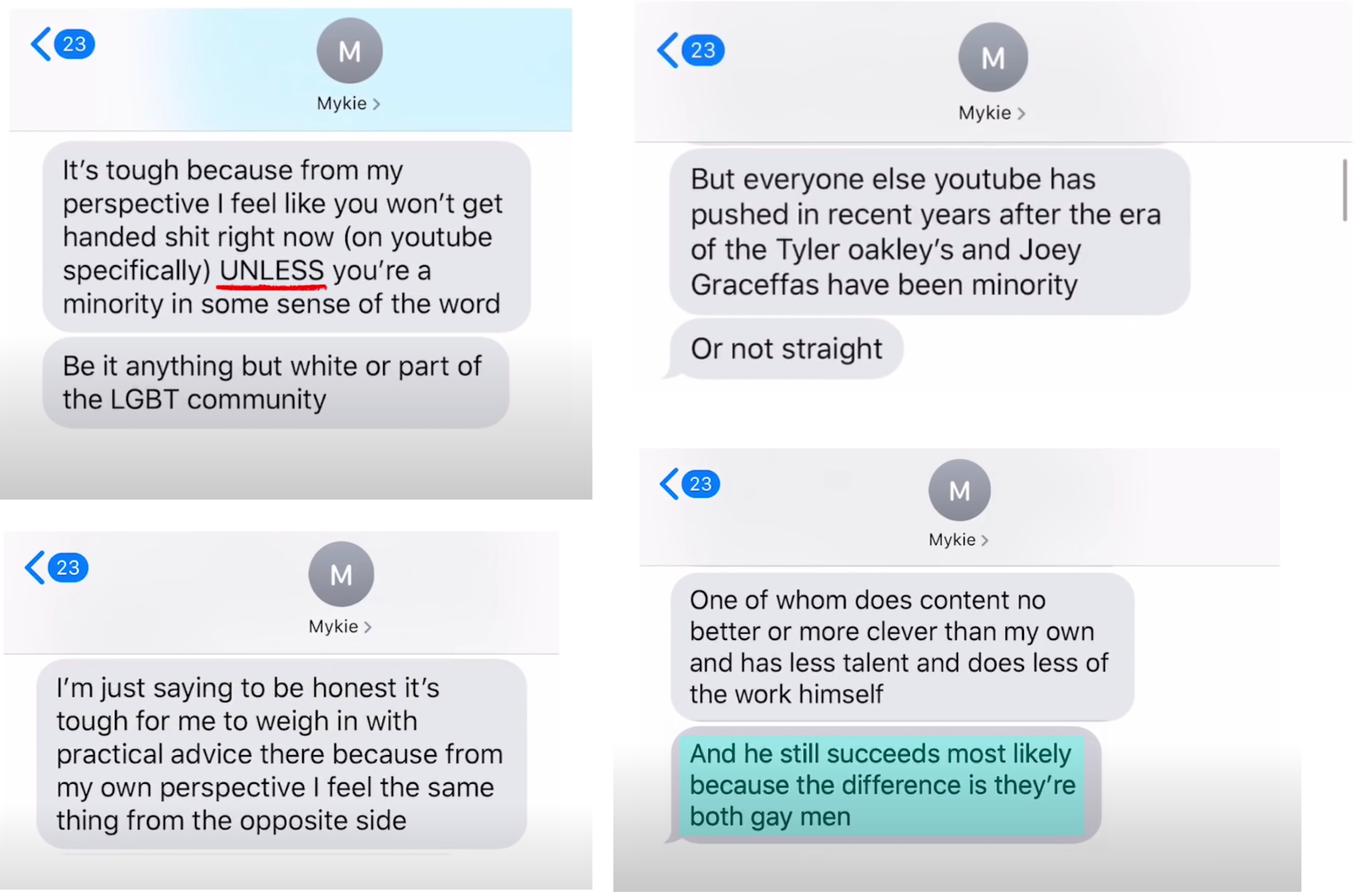 YouTube/SWOOPValentine shared texts from Mychal that she says showed her saying James Charles has ‘less talent’ and ‘still succeeds’ because he’s gay.

Valentine says Mychal used the conversation to attack Charles again, writing that Charles is “no better or more clever” and has “less talent” than her, and that “he still succeeds” because he’s a gay man.

Valentine also said Mychal used a smaller, Black creator’s video idea and refused to credit him and that Mychal exhibited performative activism during the widespread Black Lives Matter protests in 2020. Later, when Mychal and Mychal’s friend confronted Valentine about her social media posts, Valentine said they used “gaslighting,” a type of manipulation to make someone question their own reality, memory, or perceptions, to try and convince her that Mychal wasn’t microaggressive.

Valentine and Mychal didn’t respond to Insider’s request for comment.