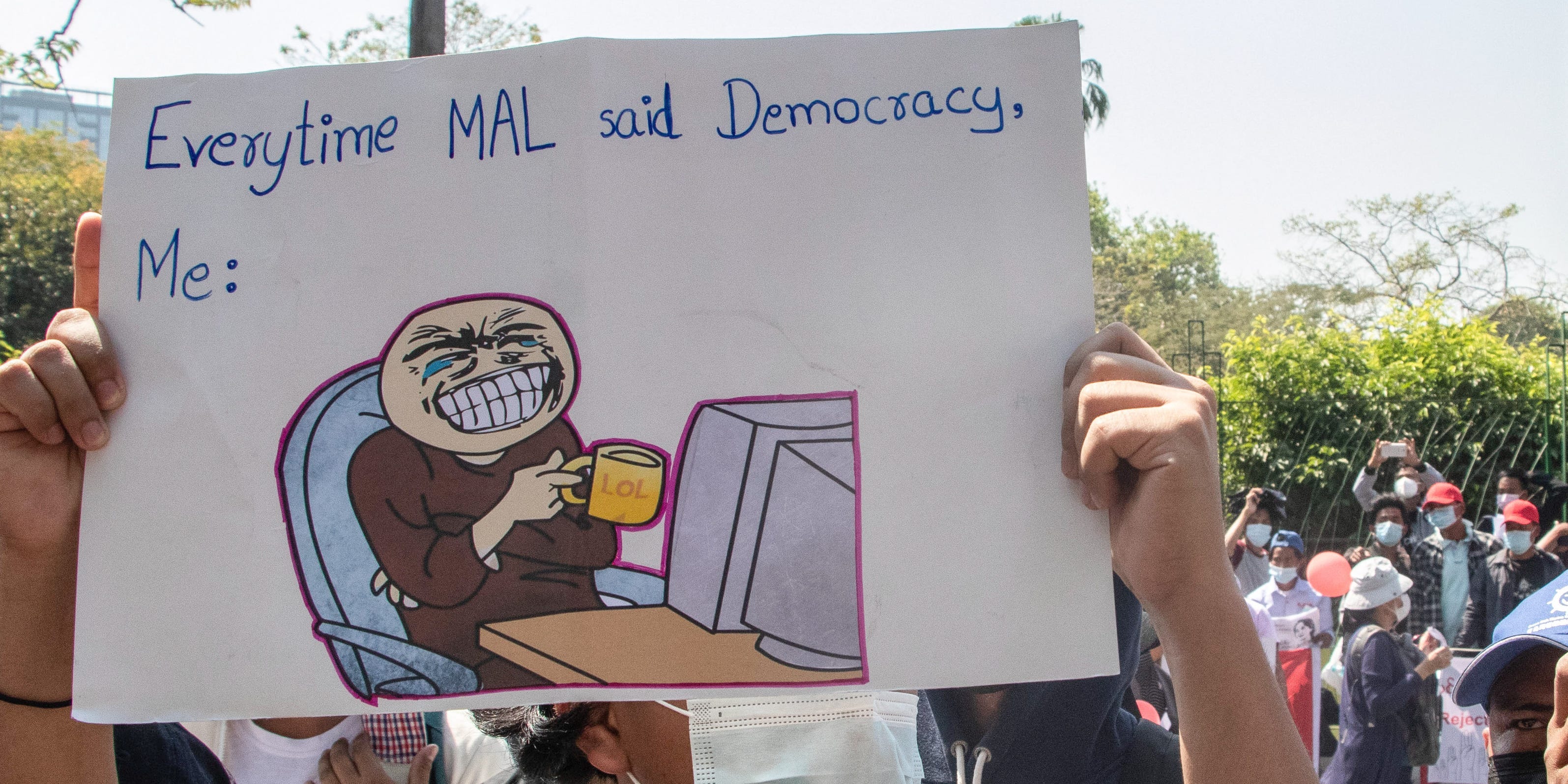 Tens of thousands of protesters have taken to the streets in Myanmar to protest the ongoing military coup â€” and many are using memes and humour to combat police aggression.

Myanmar’s military staged a coup on February 1, removing the democratically elected National League for Democracy from power and installing their own leadership. NLD leaders, including Aung San Suu Kyi, and ousted President Win Myint, are currently being held under house arrest.

Since then, Burmese citizens have been taking part in non-violent acts of civil disobedience and protests.

Khoo Ying Hooi is a senior lecturer at the University of Malaya in Kuala Lumpur who studies protests and social movements. Hooi told Insider that the memes are a way for the resistance movement to attract attention and signal their non-violent intentions.

“The pandemic itself does not offer a ‘friendly’ environment to gather big crowds,” she said. Employing humour is “a sign of showing they opt for a nonviolent approach in protesting.”

In other words, using memes is a great way to win hearts and minds.

“When these creative tactics infiltrate mainstream discourse as in the news, there is a higher potential for the public to cultivate solidarity and, in the long run, could contribute to systemic change,” she said.

In recent days, the military has grown increasingly violent in its responses to the protesters. Over the weekend, police used water cannons and rubber bullets to disperse crowds in Myanmar’s largest city of Yangon and in Naypyidaw, the country’s capital.

A 19-year-old woman was struck in the head on Wednesday by a rubber bullet and remains in critical condition. Doctors say she is unlikely to survive.

President Joe Biden has condemned the coup and on Wednesday night announced the US would be imposing sanctions on Myanmar and “freezing US assets that benefit the Burmese government.”

Biden also said he would “immediately sanction the military leaders who directed the coup, their business interests, as well as close family members.”

In the meantime, Burmese citizens continue to take to the streets. Read on to see some of the clever ways they’re drawing attention to their plight.

A group of lawyers used emoji masks to hide their faces.

One sign read: “My ex cheated better than the military.”

People of all ages have joined today’s street protests, but youth make up the biggest chunk. A generation that grew up trading memes on Facebook is taking their wit, irreverence and innuendo to placards mocking the military.

“I am a LITTLE upset,” one protester wrote. 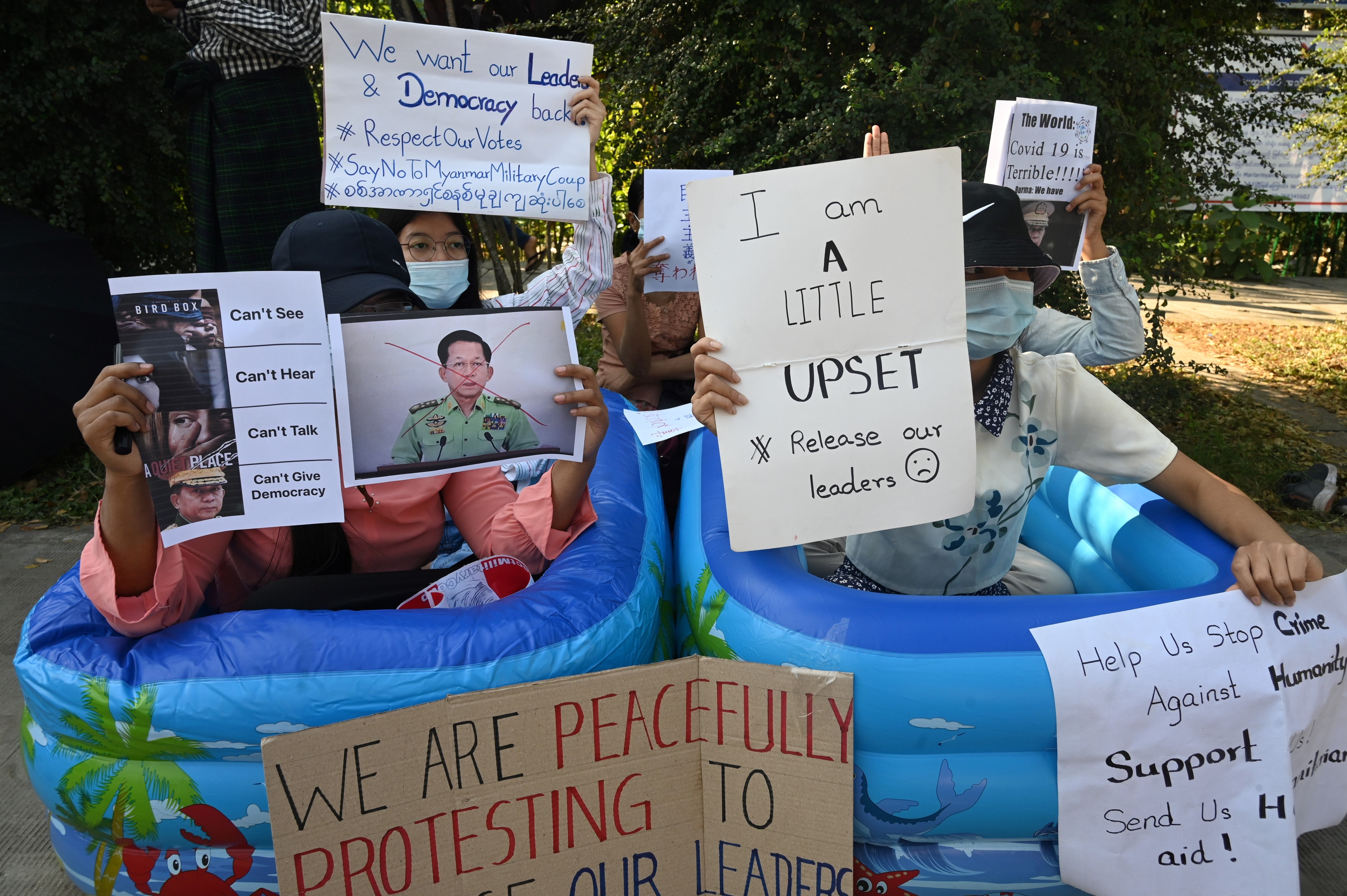 Several signs referenced the Cardi B/Megan Thee Stallion hit “WAP.” (We’ll let you figure out what it really stands for.)

I firmly believe that the memes are going to win this for the good guys in the end pic.twitter.com/PVxd5KkxGE

A group of women dressed up in wedding dresses. One carried a sign that said, “I don’t want [a] military coup, I just want marriage.” 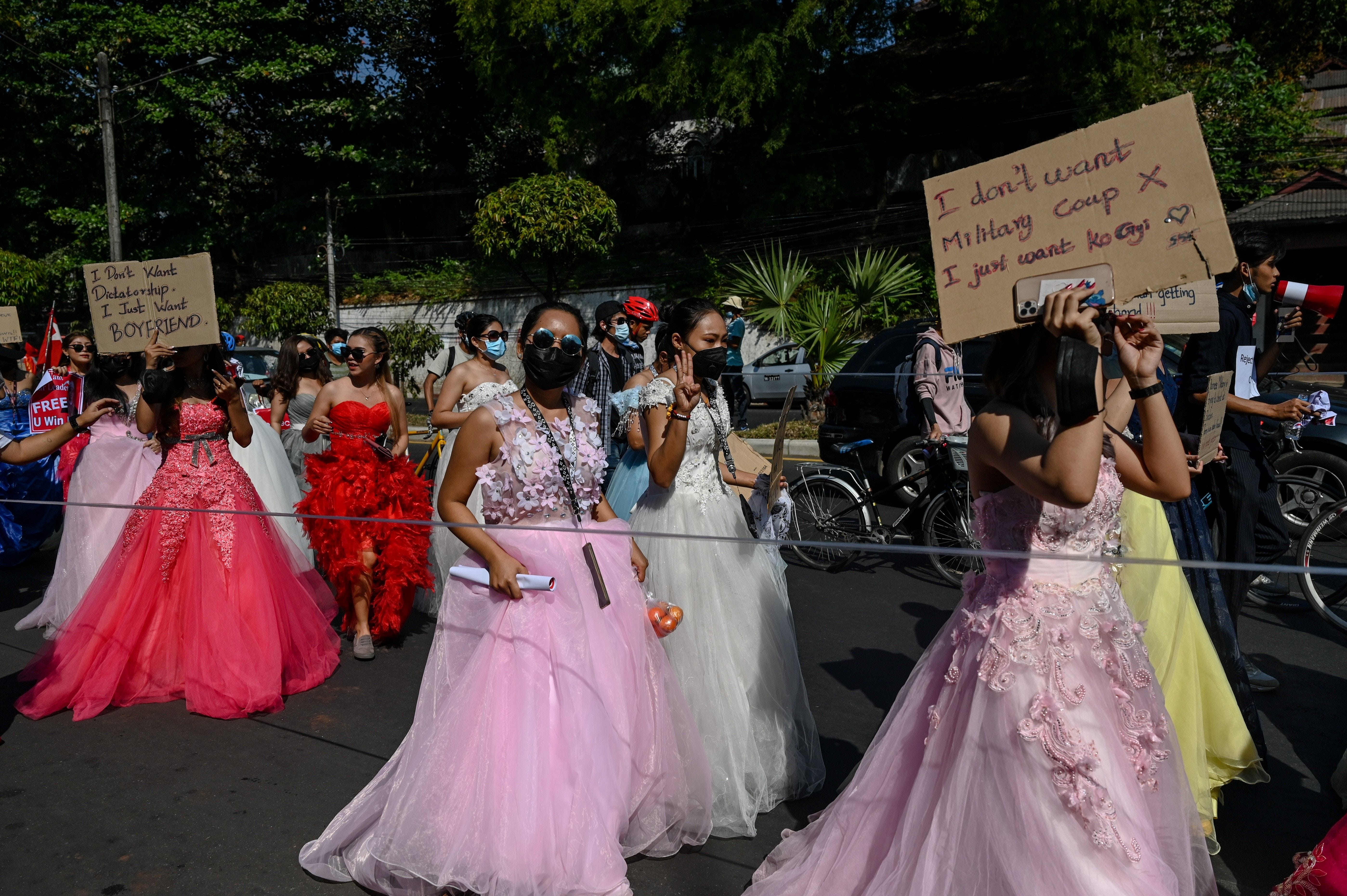 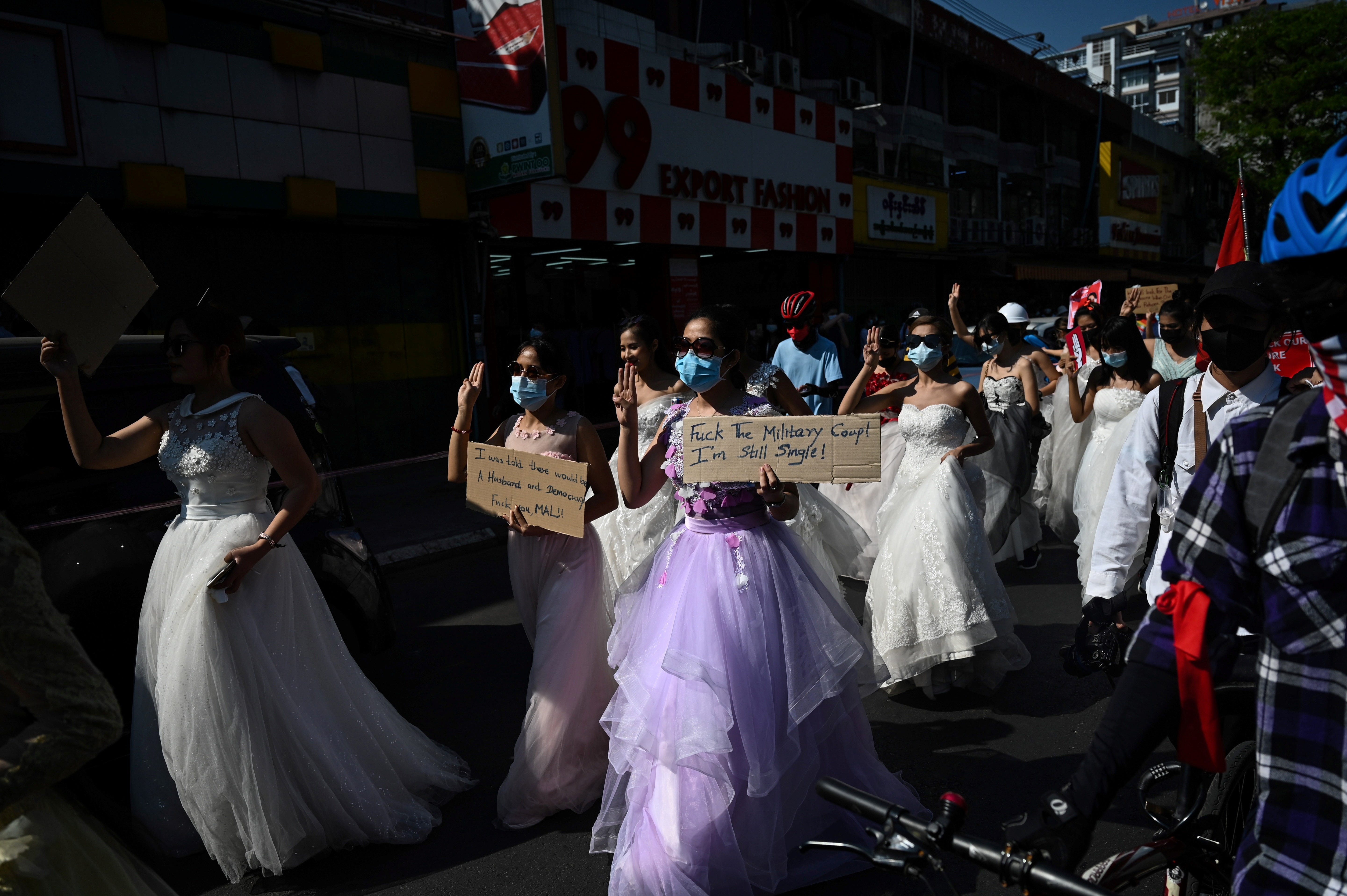 One man held a sign emblazoned with a “rage face” illustration — a meme that became popular on 4Chan. A couple of (presumably single) men professed the importance of relationships over dictatorships. 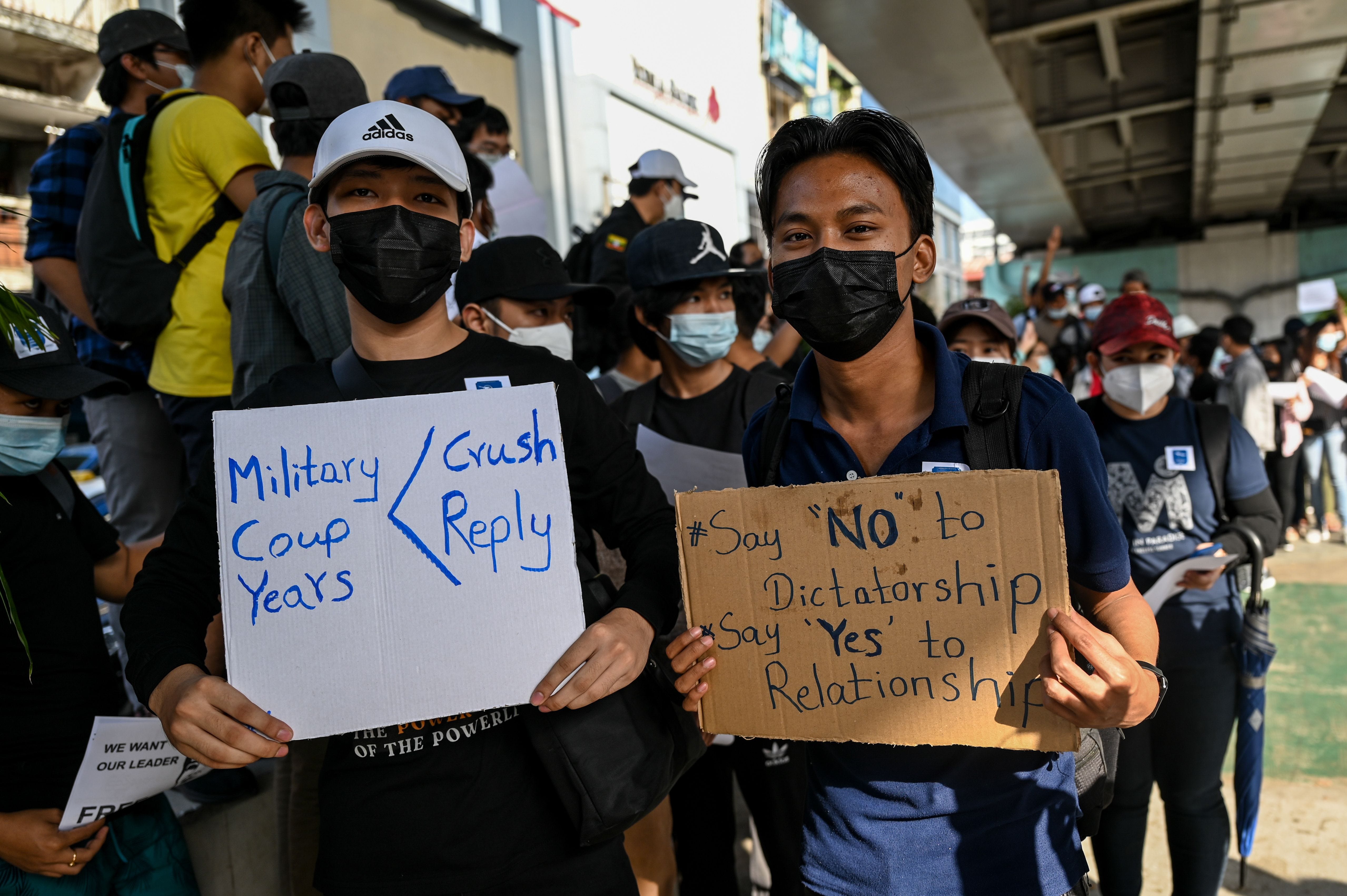 The coup is “so bad, even introverts are here,” read one sign. 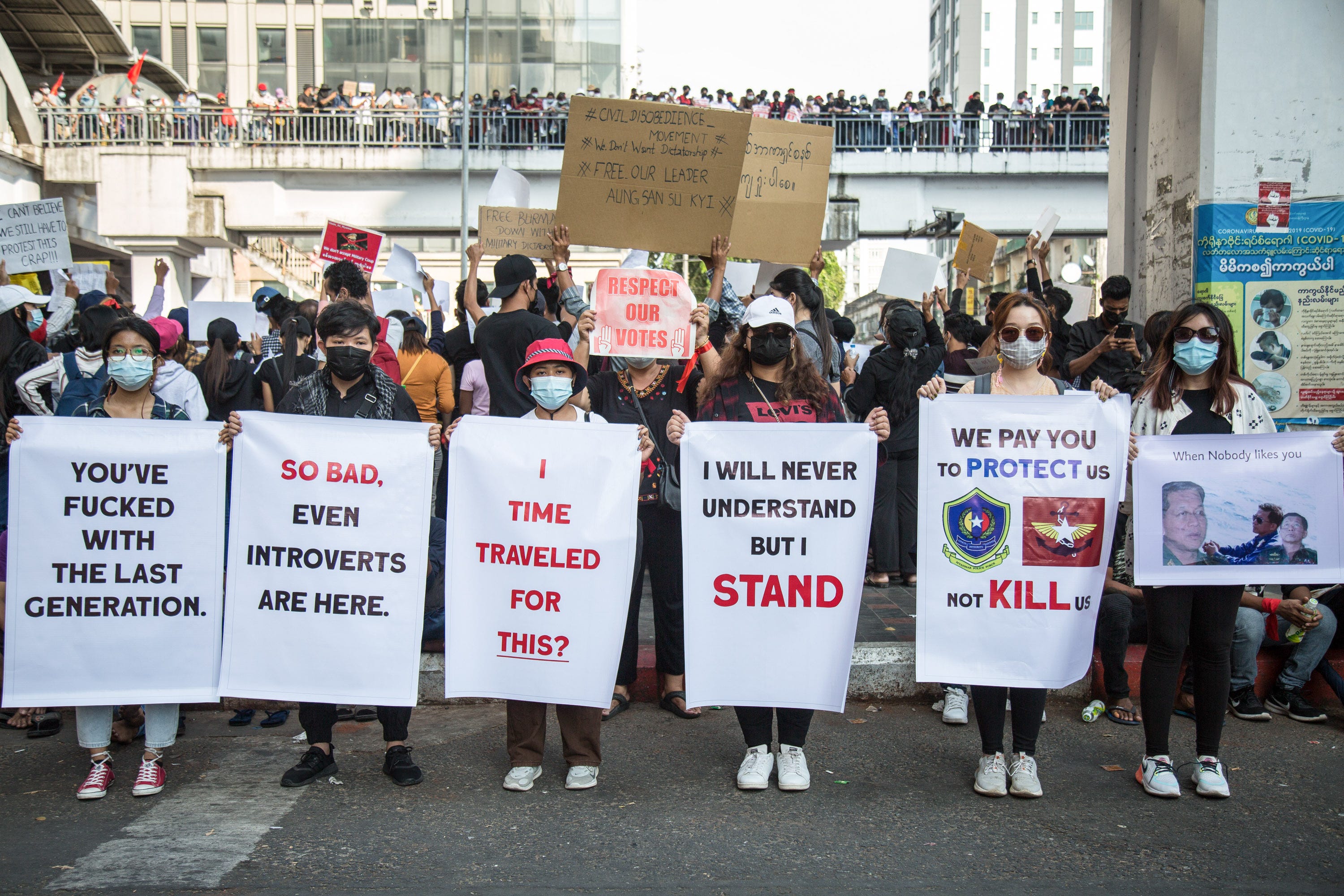 And finally, “My ex is bad, but Myanmar military is worse.”

dude i’m dying over these protest posters for Myanmar pic.twitter.com/ofGEbWMjTr