Mxmtoon shared her first song online when she was 17. She says if she had known it would be heard by millions of people, she would have deleted it 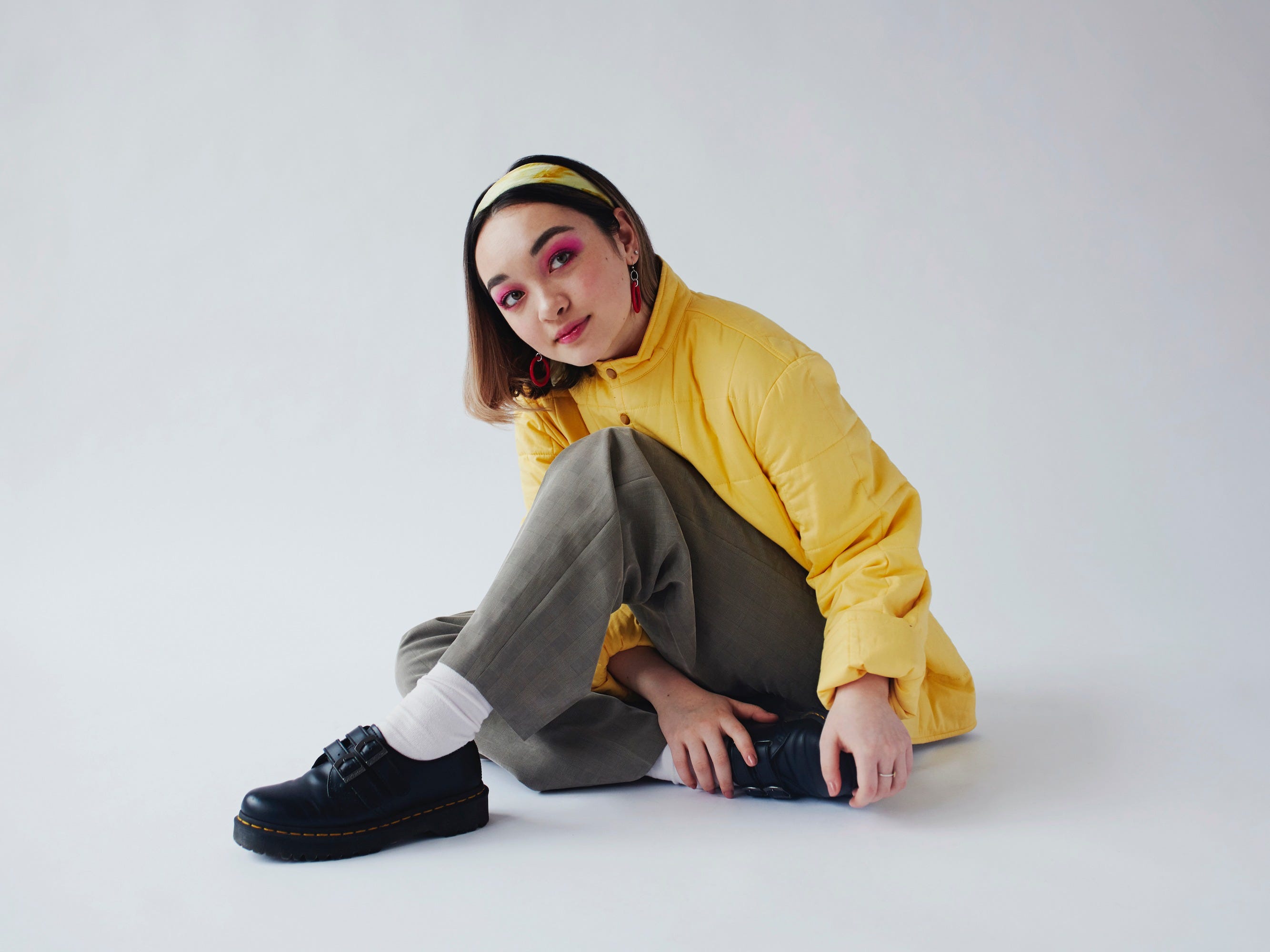 April Blum/Courtesy of mxmtoonMaia creates music as mxmtoon, a YouTube username she created as a young teenager.

Insider launched the Stay Insider Sessions to connect with musicians while they, like many of us, are grappling with isolation and unprecedented downtime. Next up: mxmtoon.

“Oh my God, am I indie Justin Bieber? Maybe.”

Mxmtoon is laughing. Her voice is warm and playful, tinged with sarcasm, as she reacts to the imagined symmetry between herself and one of the world’s most recognisable pop stars.

However, though I appreciate her humility, I don’t think it’s an irrational comparison.

Bieber was the first massive, mainstream success story for an artist who was discovered via YouTube. About one decade later, that category has expanded in terms of both variety and number of artists – and one of those artists is undeniably mxmtoon, aka 19-year-old Maia, who invented her all-lowercase online username as a ukulele-playing high schooler. (She prefers not to share her last name.)

Today, mxmtoon has racked up nearly 500 million streams worldwide. She has more than 5 million monthly listeners on Spotify and the music video for her breakout song, “Prom Dress,” has 13 million views on YouTube. Hers is an online-bred success story, any way you slice it. 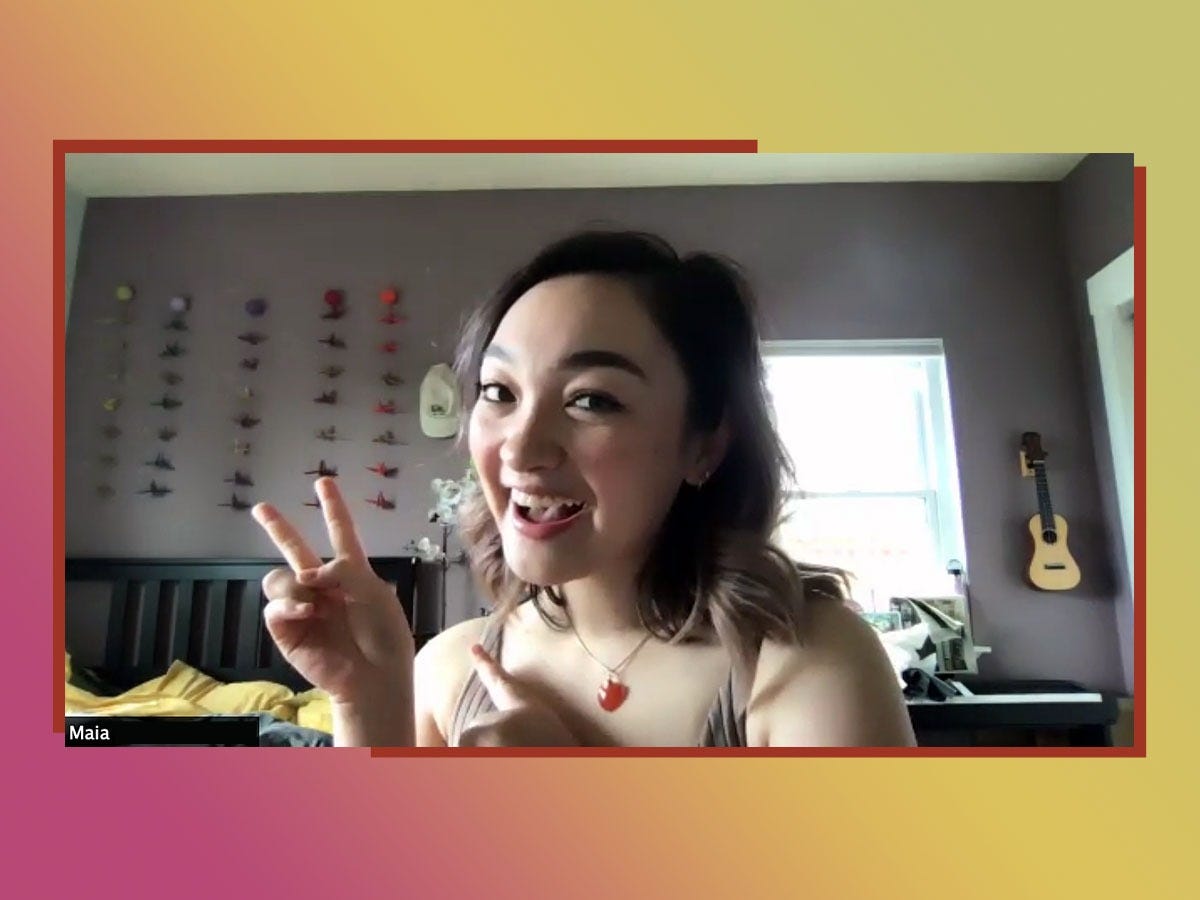 Callie Ahlgrim/InsiderMxmtoon during a recent Zoom call with Maia.

By the time mxmtoon began getting attention for her music, her parents and classmates didn’t even know she was posting songs online

Mxmtoon began writing songs “for the background of my life” at 13 years old, sitting in the very bedroom where she sat during her Zoom call with Insider.

“It’s kind of weird. I’ve returned back to my roots in a lot of ways during this crisis,” she tells me, looking around at the “hodgepodge” of wall decorations that haven’t changed in five years.

When she was 17, she posted her first original track as mxmtoon, a tongue-in-cheek ode to Valentine’s Day called “1-800-DATEME.”

“I try to forget that so hard because it was a very embarrassing first track to release on the internet,” she laughs. “I have so much love in my heart for the girl that wrote that song – but also, why would that be your first song that you put out there?”

The song is reminiscent of the playful YouTube she grew up with: the endearingly self-conscious, parody-adjacent energy of channels like charlieissocoollike and Paint.

“I just kind of posted it because I didn’t think anyone was going to see it,” mxmtoon says sheepishly. “And I kept doing that on SoundCloud, and I would post covers. I made YouTube videos too, because I was just a kid who really liked to make content, and express myself in that way.”

How would your 17-year-old self react, I ask, if she knew her songs would someday have millions of plays?

“Actually, I think I probably would have quit,” she laughs. “That is such a terrifying reality for me. And it still is, to think about the fact that there’s this huge number of people that are watching and listening to me every single day.”

“I would have freaked out, and shut everything down,” she continues. “I actually restarted my Twitter account once, because I got to 1,000 followers and that felt too overwhelming. I deleted my account because I was so scared that it was too many people.”

“I don’t know if I would have done this if I had known that I was going to be successful.”

After a relatively short amount of time, mxmtoon had people paying attention. She drew inspiration from acoustically inclined artists like Sufjan Stevens and Iron & Wine, and music blogs began fawning over her intimate, effervescent songwriting.

By the fall of 2017, she had racked up something like 10,000 subscribers on YouTube. But Maia had yet to tell her real-life loved ones about her online alternate universe.

“I finally got to a point where I was like, ‘This is getting a little bit bigger than I can control. I feel like I should tell them,” she explains.

“And so I walked into the kitchen, I told them, and they were so utterly shocked – especially as two teachers who championed the message that you should be hyper-aware of what your children are doing on the internet. And I was this 17-year-old kid, just totally going off the rails on the social media space.”

Mxmtoon had planned to study architecture after graduating from high school in 2019. She even put music on hold to apply to college – but eventually decided to indulge in a “gap year,” just in case.

“I had to give myself at least one year to focus on what could be. And so my parents were like, ‘Alright. If it doesn’t work out, you’ll just go to college. We’ll give you the year to see what happens,'” she smiles. “Now, I’m on an indefinite hiatus from the educational system. So it’s worked out OK.” 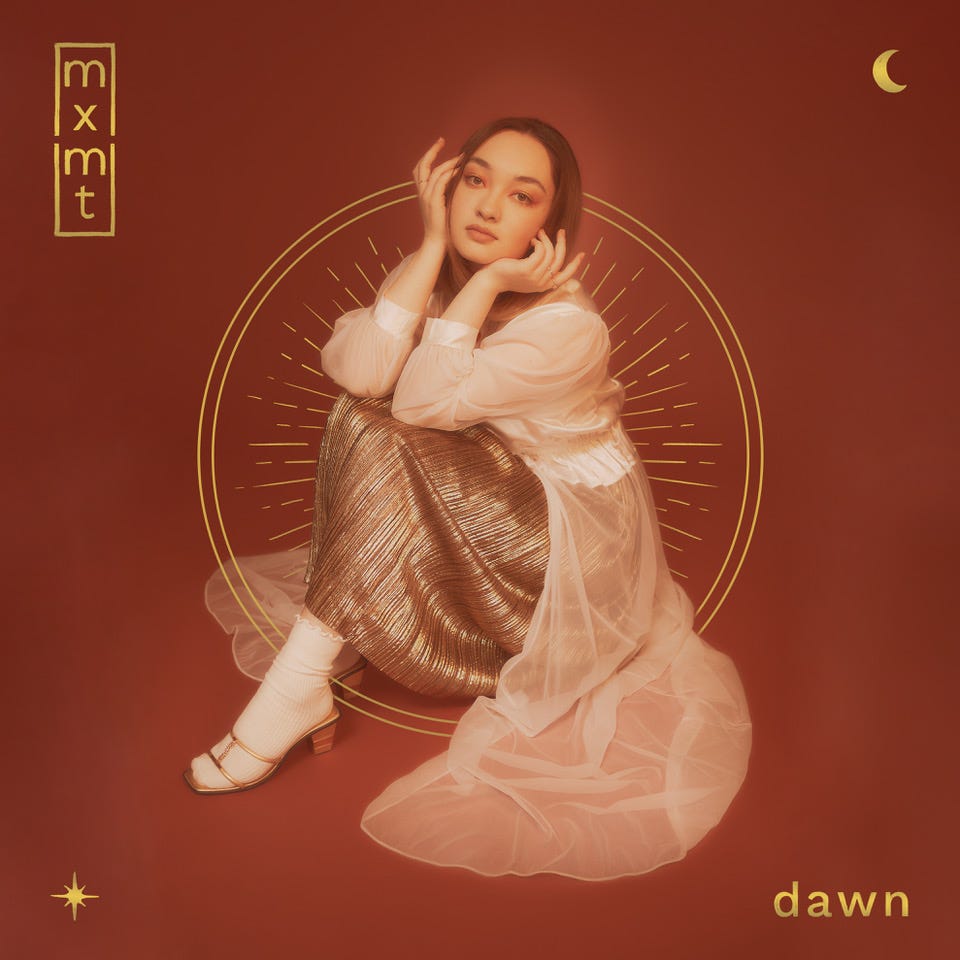 “Dawn,” released in late April, is intended as the first instalment in a two-part EP project, with its sister “Dusk” expected later this year.

For mxmtoon, who went viral singing about prom dress-induced anxiety, the new seven-song collection signals a newfound confidence under mounting fame and pressure.

The opening track, “Fever Dream,” is the sonic embodiment of optimism, like if your ears could understand the sun streaming through your window on a Saturday morning. “1, 2” is a bright, poppy highlight that feels tailor-made for bedroom dance parties. The EP ends with “Almost Home,” a deeply sophisticated, accessible meditation on moving forward while staying grounded.

Mxmtoon describes the EP as a “stepping stone,” a low-pressure vehicle to explore the boundaries of her lush, bright-eyed sonic world – beyond the ukelele-and-voice formula that she became known for.

“I kind of describe it as feeling like… When I listen to these songs, it makes sense to me why I get put on a Spotify playlist with other artists that I admire, I guess,” she explains thoughtfully. “I can detach myself enough from this music and be like, ‘Oh wow, this is my job now,’ instead of listening to it and being like, ‘It is really strange that people are listening to this.'”

“Not to say that I wasn’t confident in ‘The Masquerade’ because I really was,” she adds, referring to her 2019 debut album. “But I think with ‘Dawn,’ I can see myself more in the grand scheme of the music sphere and be like, ‘OK, yeah. My sound kind of matches up with a lot of people that I listen to now, and in my own free time.'”

Even the cover art, with its muted tones and undeniable poise, presents mxmtoon as a reflective artist with a mature stylistic vision.

“The general imagery of ‘Dawn’ is about the sun rising, and having this mindset that even through hardship, the sun will still rise and it will still set, and things will still resume,” she explains. “I think I wanted the cover art to grow up with me because I think I’m growing up, and kind of embodying that feeling of like, ‘It’s going to be OK,’ and a regal sort of attitude that comes with that.”

“I think it’s been important for me to age my project alongside with me because I would hate to feel stuck in that 17-year-old girl who is still in her bedroom,” she pauses, laughing. “Even though I find myself in that exact same situation, now that I’m in quarantine.”

Mxmtoon makes her fans feel understood and valued, especially those who share aspects of her identity

Although she’s quite giggly, mxmtoon speaks with the grace and maturity of someone who has lived many more lives than a recent high school graduate.

It occurs to me, somewhere in between our discussions of the song “Blood” by The Middle East (“It made me feel like, ‘Dang, I really want to write music that can feel like a cathartic release of emotion for people'”) and making a one-year anniversary video for “Prom Dress,” featuring fans whose proms were affected by the pandemic, that mxmtoon compulsively empathizes with every person she comes across.

Given that mxmtoon is also a young, bisexual woman of colour from a family of immigrants, she describes making people feel seen and heard as a naturally important part of her existence.

“Representation is obviously such a huge issue that I try to address, especially as a mixed-race woman of colour,” she explains. “And I have a lot of privilege to have this platform, and be able to speak on my experience, and hopefully lift up the experiences of other people that I might not necessarily understand.”

Mxmtoon, who is Chinese-American, recently teamed up with Spotify to celebrate Asian American and Pacific Islander Heritage Month.

“I remember growing up, I didn’t have people to look up to as someone who is half-Asian and half-white,” she tells me. “There was really nobody in the music space, specifically, to where I felt like my experience was reflected visually.”

happy asian american & pacific islander heritage month! i'm honored to be a part of this important campaign!! thank you @spotify for including me ❤️ https://t.co/sC3k2NIy9z pic.twitter.com/geFsxkOWCO

“So to see myself on a Spotify billboard this month was so insane, even though no one’s leaving their house right now,” she continues. “To think about the fact that, oh man, maybe one of my listeners is seeing her story on that billboard, and being like, ‘Oh wow. Someone who looks like me can also do that,’ and also feel valid in her identity and expressing her Asian heritage and culture – it’s just such a huge honour.”

Mxmtoon’s knacks for consideration and inclusion also shine through in her lyricism, as she tends to write many of her poignant love songs from a gender-neutral perspective.

“So I think that it’s nice for me to be able to think about that, because heck, who knows what could happen in the future? Maybe I’ll like someone else,” she shrugs. “I just think songs should exist for anyone.”

Before we hang up, mxmtoon looks me in the eye and thanks me by name, which is rarer than you might think.

“And thanks for comparing me to Justin Bieber,” she adds. “I’ve now realised my true identity.”