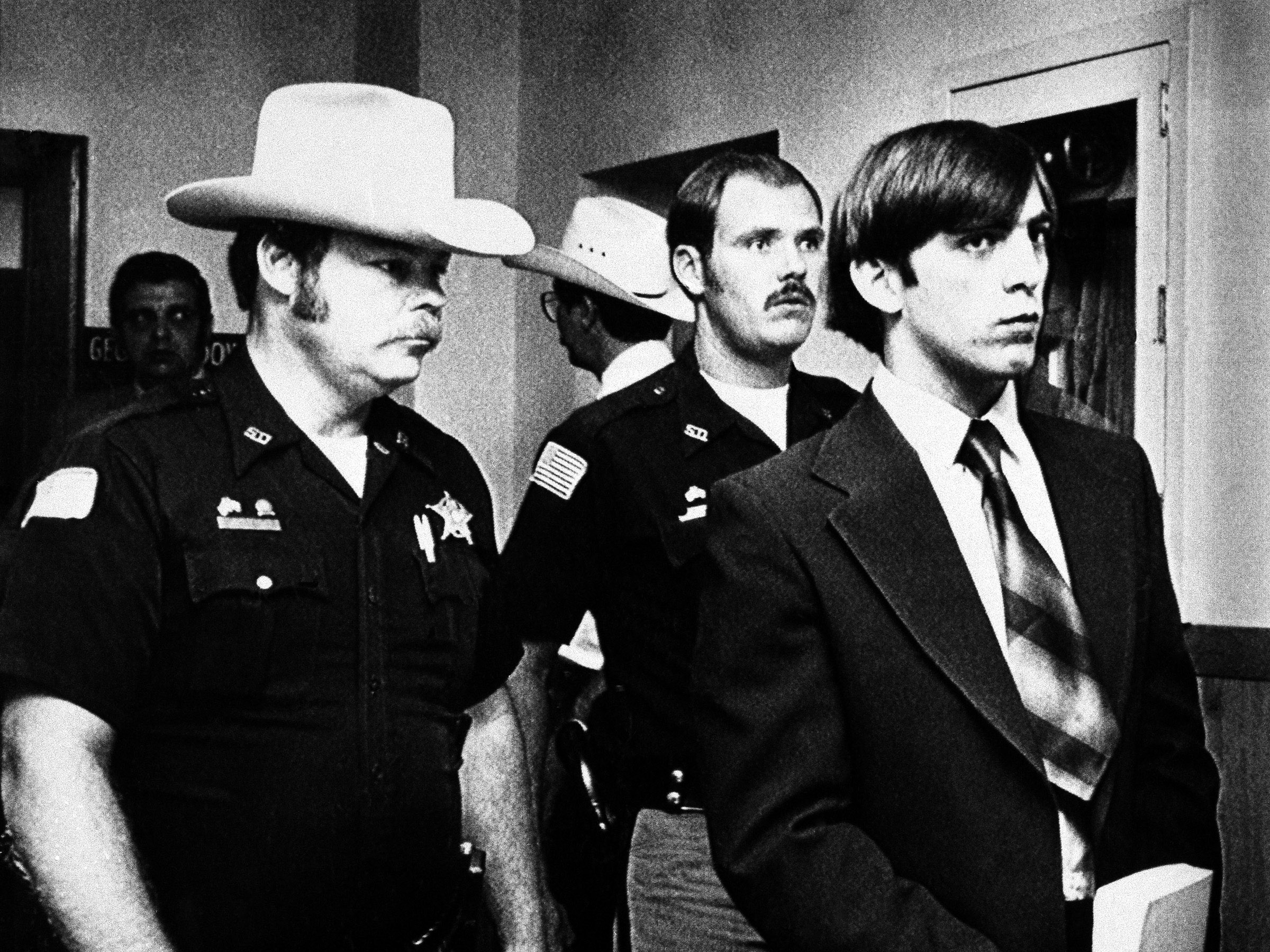 APJohnny Frank Garrett strangled a nun to death on All Hallow’s Eve.

Halloween is synonymous with horror. Whether you’re attending a haunted house, dressing up as your favourite movie villain, or watching a horror flick, Halloween is a celebration of the macabre.

For some, however, the horrors of Halloween night are all too real. From random, senseless slayings to passion-driven murders, All Hallow’s Eve has been deadly in the past.

Keep scrolling to read about murders that took place on Halloween.

Editor’s note: Some of these accounts feature graphic depictions of violence, sexual abuse, and murder.

Ronald O’Bryan has been called the “Man Who Killed Halloween” and the “Candy Man.”

On Halloween in 1974, 8-year-old Timothy O’Bryan returned to his Houston home from a long night of trick-or-treating. His father, Ronald, gave him one last piece of candy: a Pixy Stix, which Timothy ate instantly. Within moments, the boy was vomiting, and he died on the way to the hospital. After changing his story multiple times, police learned that Ronald was responsible for his son’s death as he had poisoned the candy with cyanide. Turns out, Ronald was in debt and had taken out a life insurance policy on his children.

A year later, he was found guilty of the murder, and he was given the death penalty by lethal injection, Vice reports.

The murder left its mark, though: Parents today still check their kids’ candy to see if it’s been tampered with. 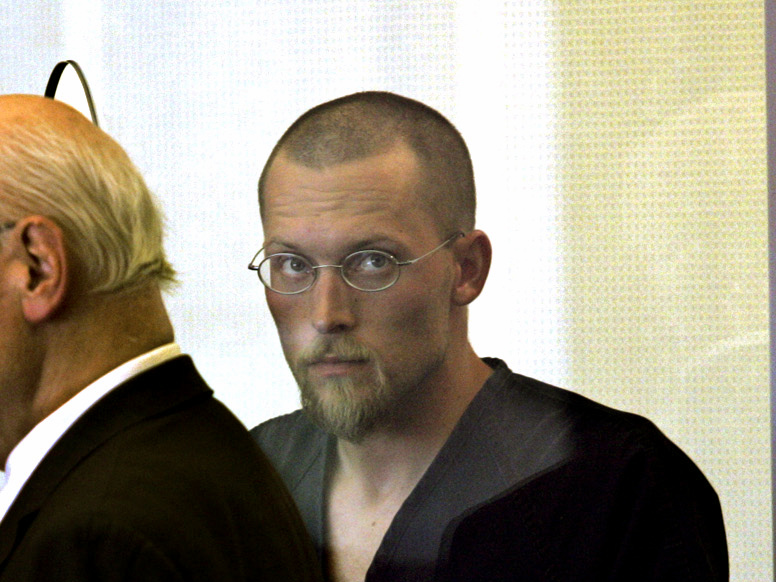 Leslie Mazzara, Adriane Insogna, and their friend Lauren Meanza were busy handing out candy to trick-or-treaters at their Napa, California, home on Halloween night 2004. At around 11 p.m., the three women went to bed, not knowing that there would be one more visitor that night.

Meanza awoke to a scream from the upstairs bedrooms, ran out of the house, and drove away, leaving her two friends behind. Mazzara and Insogna – both 26 – were stabbed to death upstairs.

Eric Matthew Copple, a friend of one of the victims, eventually turned himself in and confessed to the murders, though he never told anyone his motive, the Nappa Valley Register reports. Copple is serving a life sentence without the possibility of parole.

The Toolbox Killers murdered for the last time on Halloween night 1979.

APLawrence Bittaker and his accomplice committed their last murder on Halloween.

In 1979, Shirley Ledford was hitchhiking home from a Halloween party when two men picked her up in a dingy van.

Little did she know that the two men were known as The Toolbox Killers.

Lawrence Bittaker (pictured) and Roy Norris were famous for picking up female hitchhikers and then torturing them with tools typically found in a toolbox, according to New York Daily News. They often took pictures of their victims during the slayings.

After torturing Ledford, they dropped her body on a stranger’s lawn. Ledford became the pair’s fifth and final victim after a friend turned them in.

Bittaker was sentenced to death but died in 2019 of natural causes, NBC reports. Norris, who cooperated in the investigation, was given 45 years to life. Getty ImagesMartha Moxley was found dead in the backyard of her home in Connecticut.

The night before Halloween in 1975, 15-year-old Martha Moxley left her Connecticut home to attend a costume party. On Halloween morning, she was found dead in the backyard, beaten to death by a golf club, according to The New York Times.

Twenty-five years later Michael Skakel – who was also 15 at the time of the slaying – was convicted of the murder and sentenced to 20 years to life in prison. He maintained his innocence, and on May 4, 2018, the Connecticut Supreme Court vacated his conviction. In 2020, CNN reported that the case was reopened to the public.

A Japanese exchange student in 1992 never made it to his Halloween party. 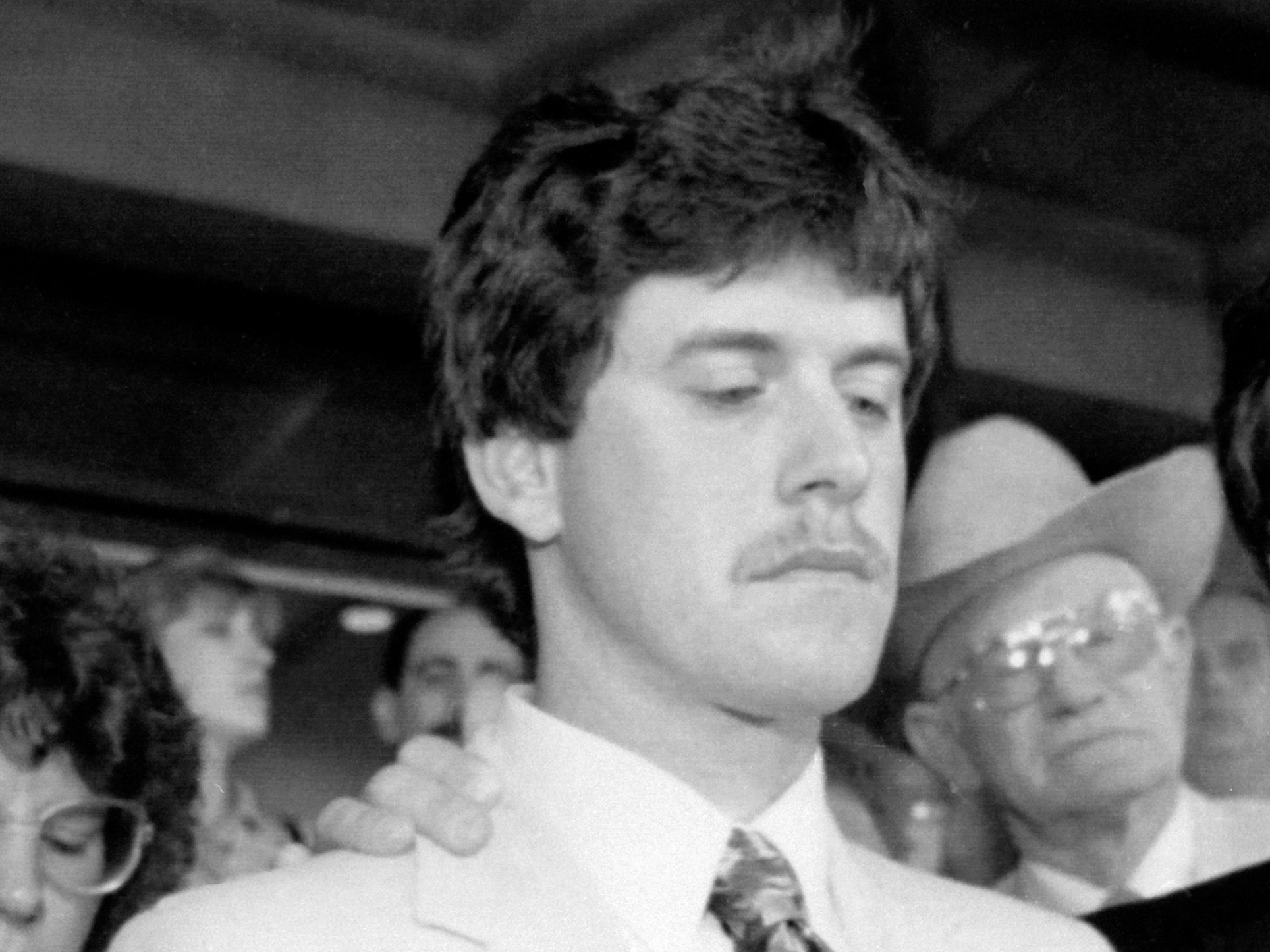 When Yoshihiro Hattori, a Japanese exchange student, went out on Halloween night in 1992, he was heading to a party in New Orleans. Unfamiliar with the neighbourhood, Hattori struggled to find the address of the event. When he eventually thought he found the house, he knocked. When he got no answer, he walked back towards his car. Suddenly, the door of the house opened, and Hattori said, “We are here for the party.” But the man in the doorway shot Hattori with a revolver.

Turns out, Hattori was at the wrong address. When police questioned the homeowner, Rodney Peairs (pictured), he claimed that he had been scared and that he thought the student was trespassing on his property with criminal intent, according to Japan Today.

Peairs was charged with manslaughter, but invoked the “castle doctrine” – in which Americans claim they have the right to apply lethal means to protect their homes – and was found not guilty by a jury.

“Sometimes I feel like he’s still in America,” Hattori’s father told Japan Today in 2012. “Someday he’ll come back home, I say to myself.”

Peter Fabiano died in what police said was a crime of passion in the late ’50s. 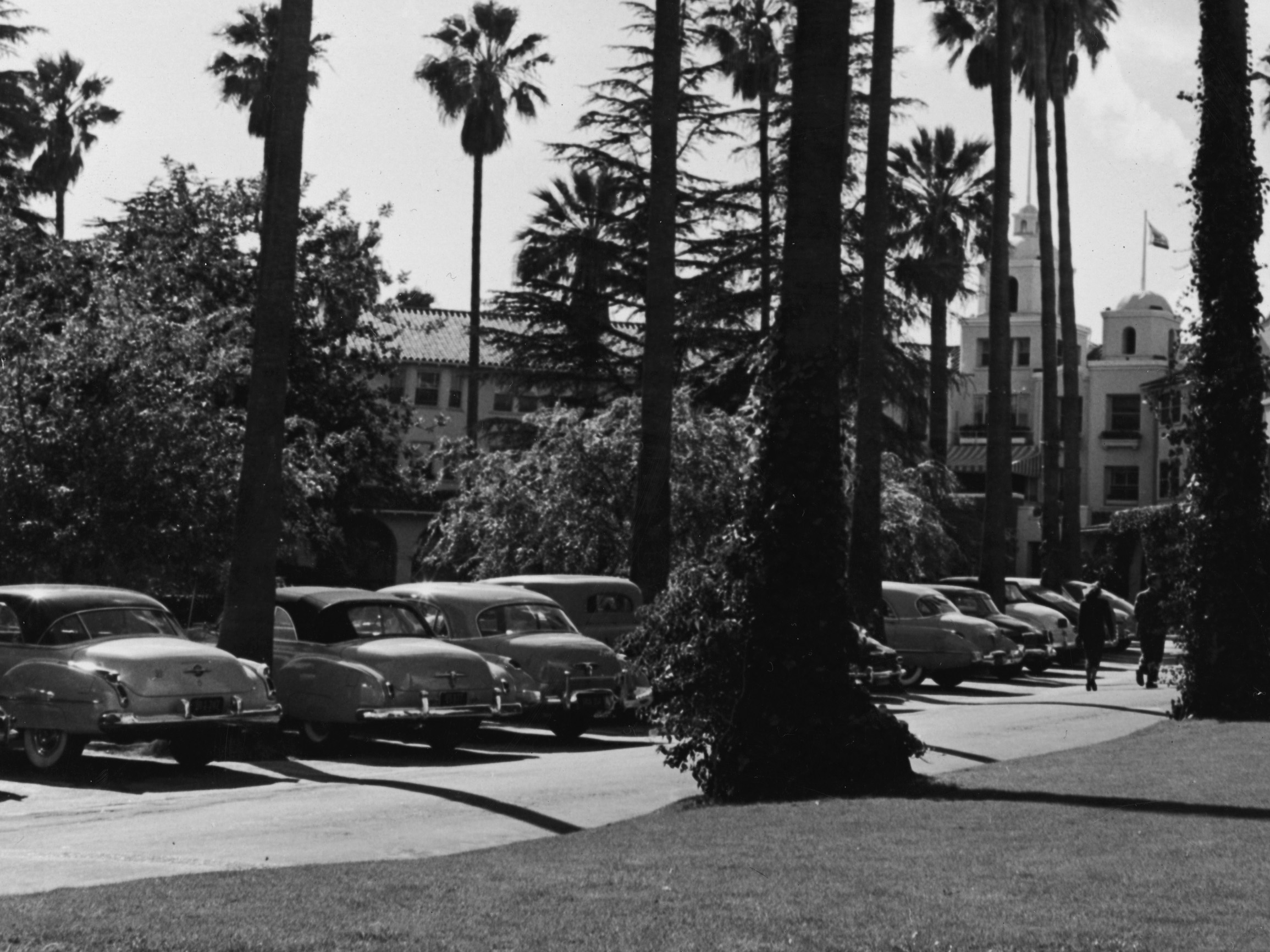 Hulton Archive/ GettyLos Angeles was shocked by a deadly love triangle in the ’50s.

When Peter and Betty Fabiano went to sleep Halloween night in 1957, they thought they were finished with trick-or-treaters. But in the middle of the night, the doorbell of their Los Angeles home rang. Peter got out of bed and brought candy to the door. On the doorstep was a woman wearing a mask. She raised her hand, which was in a paper bag, and shot him in the chest. He died instantly.

According to The Los Angeles Times, police eventually arrested a woman named Joan Rabel who reportedly had a sexual relationship with Peter’s wife, Betty. It’s believed Rabel talked another woman, Goldyne Pizer, into murdering Peter. Rabel was convicted of second-degree murder, along with Pizer, and was sentenced to five years to life in prison, and both women were later released. Betty was never tried for any connection in her husband’s death.

Johnny Frank Garrett was convicted of strangling a nun to death on All Hallow’s Eve.

APJohnny Frank Garrett raped and murdered a nun in Texas.

On October 31, 1981, Sister Tadea Benz’ body was found naked in a convent in Texas. The other nuns in the house noticed a broken window in the community room, so they called the police immediately. Authorities found Benz’ clothing and a knife under the bed. Meanwhile, an autopsy revealed the nun was stabbed, strangled, and sexually assaulted.

Police arrested a man who lived across the street named Johnny Frank Garrett after a witness saw him running from the convent that evening. He was convicted and sentenced to death in 1992. His last words were reported to be: “I’d like to thank my family for loving me and taking care of me. The rest of the world can kiss my a–.”

Karl Jackson was killed over an egging incident. Phil Walter/ GettyKarl Jackson was killed after a confrontation over car egging.

Throwing eggs on Halloween night is typically a harmless prank, but in 1998 it turned deadly. When 21-year-old Bronx resident Karl Jackson and his girlfriend went to pick up her son from a party, teenagers threw eggs at their car. Jackson got out of the car to yell at the pranksters to stop. In response, one of the teenagers pulled out a gun and shot Jackson through the head. He died instantly, The New York Times reports.

Seventeen-year-old Curtis Sterling was charged with second-degree murder and criminal possession of a weapon. He was convicted and is serving 20 years.

According to The New York Times, he receives a card in the mail every Halloween that reads, “I’m glad you’re still there” from Jackson’s mother.

In 2010, 16-year-old Devon Griffin came home on Halloween to play video games after attending church and spending the previous night sleeping out. He noticed the Michigan home was too quiet, so he went to check on his family members, according to the Sandusky Register. Griffin proceeded to find his stepfather in bed, covered in blood. When police arrived, they found two more bodies: Griffin’s mother and brother. Police eventually learned the murderer was Griffin’s stepbrother, William Liske.

Liske pleaded guilty to three counts of aggravated murder to avoid the death penalty but was found dead in his jail cell in 2015 from a self-inflicted wound, the Port Clinton News Herald reports.

A brutal killing on Halloween night in 1981 remains unsolved to this day. 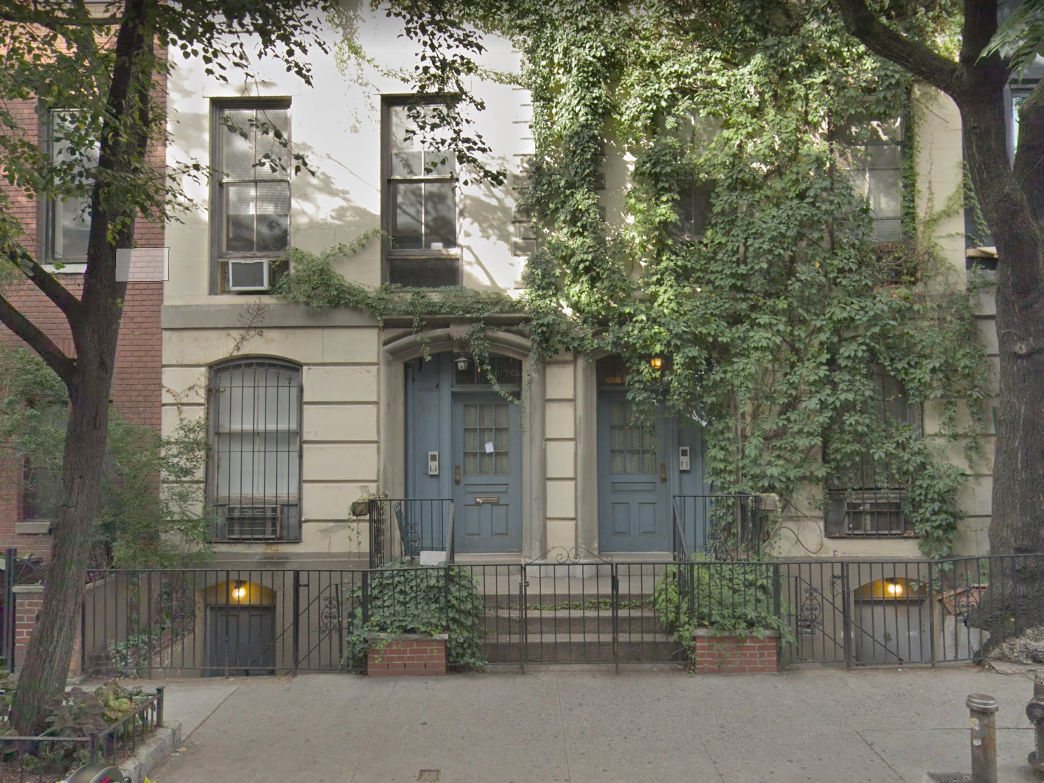 Photographer Ronald Sisman and Smith College student Elizabeth Platzman were beaten in their Manhattan apartment on Halloween night in 1981 before being shot dead. Their apartment was completely ransacked, but nothing seemed missing.