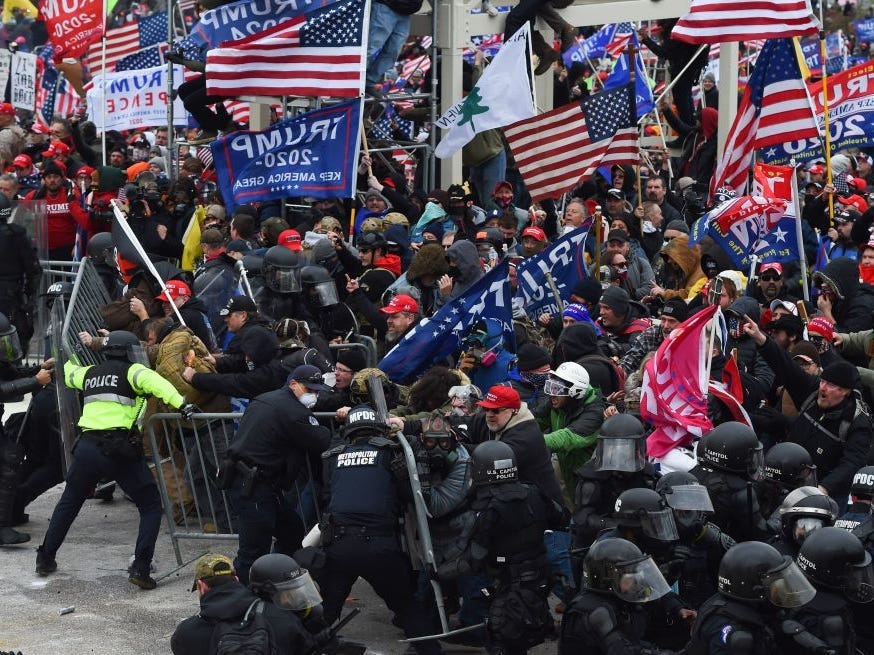 Roberto Schmidt/AFP via Getty ImagesTrump supporters clash with police and security forces as they push barricades to storm the US Capitol in Washington D.C on January 6, 2021.

A mother and her son were charged for their participation in the Jan. 6 US Capitol insurrection, according to a statement by the FBI Omaha Field Office.

According to the statement, Deborah Sandoval and Salvador Sandoval Jr. of Iowa were arrested on Friday by the office’s Des Moines Resident Agency. They face charges for knowingly entering or remaining in a restricted building or grounds without authority and violent entry and disorderly conduct on Capitol grounds, the statement said.

In addition, the Des Moines Register reported that 23-year-old Sandoval Jr. is also facing a charge for obstructing law enforcement and his mom, 54, is charged for impeding the orderly conduct of government. Court documents of both Sandovals, which would include information on why they were charged, were sealed Friday, the report said.

The Sandovals were released on grounds that they would show up at court hearings in Des Moines, Iowa later this month, on Feb. 25, and virtual video hearings in D.C that same day, as the newspaper reported citing court records.

They are not the only mother and son pair to have been arrested and charged related to the insurrection. Lisa Eisenhart and her son, Eric Munchel dubbed as “Zip Tie Guy,” were taken into custody last month. They reportedly drove from Nashville, Tennessee, to Washington, D.C, to participate in the breach that resulted in five deaths.

Over 250 people have been charged for their role in the deadly riot where a pro-Trump mob stormed into the Capitol building while Congress was certifying President Joe Biden’s win. Former President Donald Trump was charged for inciting the insurrection but was later acquitted of those charges by the Senate.