30 Bizarre Vending Machines From Around The World If you think vending machines are only stocked with chips, candy, and soda, think again.

These days, vending machines distribute all sorts of goods from cupcakes to crabs, burritos to caviar, and sneakers to cigars.

We rounded up some of the most unique vending machines we could find from all over the world.

In cities like New York City, Los Angeles, and Dallas, you can walk up to a 24-hour sidewalk cupcake-dispensing machine and purchase a delicious cupcake, like this chocolate marshmallow one below, with your credit card. Don't like cupcakes? In China, live hairy crabs can be purchased from a vending machine at a main subway station in Nanjing. It's the first live crab vending machine in China (surprising, we know) and sells an average of 200 live crabs daily. In Taiwan, customers can buy medical face masks from vending machines. These were especially popular during the bird flu outbreak. In many places in the world, including below in the Emirates Palace hotel in Abu Dhabi, customers can purchase gold straight from a vending machine.

If you put coins into this vending machine in Tokyo, a real, live person will hand you your candy. Sort of defeats the purpose of a vending machine, but who are we to judge? Also in Japan, customers can buy 'canned coffee,' made by Suntory, on the street. Who knows when the desire to get clearer skin will strike? If you're in Hollywood, California, when it does though, you're set with this Proactive acne treatment vending machine. Speaking of healthy life choices, a farmer is seen below loading organic raw milk into a vending machine dispenser in central London. The vending machine was created to circumvent a ban on the sale of raw milk in British shops, by selling directly from the farm. Colgate delivered some health help themselves with this vending machine installed in Puerto Rico. Along with the purchased candy, customers got a free tube of toothpaste while the LED screen read 'Don't forget to brush!' 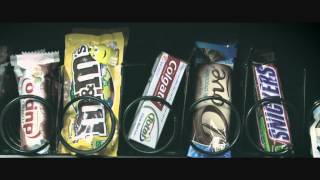 On the other end of the healthy spectrum, customers can use a vending machine to purchase crack pipes for 25 cents in Vancouver's Downtown Eastside neighbourhood. Put in place as a public service, these new pipes are meant to replace old ones which can shatter and cut a user, which leads to the spread of diseases. In a another controversial move, Pennsylvania's Shippensburg University introduced a vending machine which dispenses Plan B medication, also known as the 'morning-after pill,' after a survey showed that 85% of students supported it. Other schools, like Pomona College, have followed suit. In a Los Angeles, hungry customers can purchase a hot and ready burrito from this machine for $3. They can choose from Chorizo Sausage, Roasted Potato, Uncured Bacon, Free-Range Chicken or Shredded Beef flavours. Mmmmm. Sick of eating only candy and junk food from your vending machines? Why don't you have a salad...in a jar? Farmer's Fridge, a startup in Chicago, makes the salads, which start at $8, fresh daily and serves them in an airtight jar. This vending machine in Brooklyn allows you to trade-in your unwanted goods in exchange for something new, with no cash changing hands. Called the 'Swap-o-matic,' it was created to shift consumers thinking towards more sustainable practices of buying and selling goods. For the more refined consumer, this cigar vending machine, seen here with its inventor on the left, sells up to 25 different brands of imported premium cigars with prices ranging from $2 to $20. Feeling luxurious after your cigar? Head over to this Los Angeles mall where you can buy some caviar, ranging from $5 to $500 for an ounce. Why not go for the swanky trifecta and grab so Moët & Chandon from this London vending machine. It will run you $29 for one of these mini-bottles, but hey, you're worth it. During the World Cup in 2014, a vending machine that sold the Brazilian national soccer jersey was installed in a subway station in Sao Paulo, for rabid fans who left theirs at home. In Hangzou, China, you can walk up to a massive vending machine and rent a car for a little over $3 an hour. The cars can only reach a top speed of 50 mph but they cut down on the massive air pollution in China by running off an electric motor. 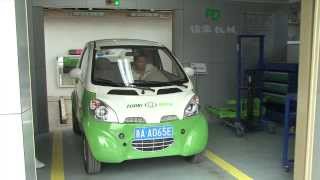 Californians with a medical marijuana licence can now get a bag of pot as easy as they could get a bag of chips, any time of the day or night. The bags, which cost $15-$20, can be purchased after hours using a finger print scanner.

Coca-Cola's Spanish brand of lemonade, Limon & Nada, can be purchased at select locations using a sliding scale for pricing. The hotter the temperature that day, the cheaper the lemonade. We really wish they had these machines here this summer. 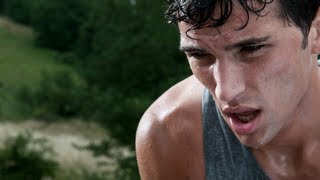 Speaking of late nights, if you've ever worn painful high heel shoes all night long, you'll understand the need for this vending machine. It dispenses soft, comfy shoes that buyers in California and Las Vegas can swap for their stilettos at the end of a long party. 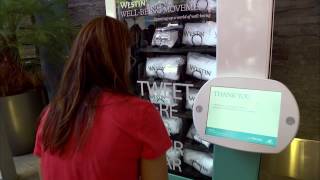 Unique vending machines are not a new thing, though. Here we see Model Betty Dutter in 1949, using a spray nozzle attached to a vending machine which dispenses sun tan lotion. For 30 seconds of spraying, it cost a dime. Philadelphia entrepreneur Marvin Kilgore has leased of 40 vending machines which dispense real human hair. The hair, used to enhance and elongate a woman's locks, ranges from $60 to $250 a pack. This innovative vending machine in Turkey dispenses water and dog food in a trough when you insert a plastic bottle for recycling. The service is provided free of charge and the company that created the machine says the recycled bottles offset the price of dog food. 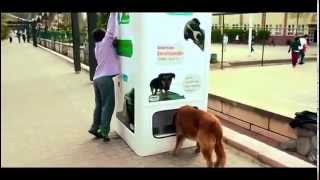 Want see some more unusual things from around the globe? Check out these 27 unusual wedding photos from across the world»