More National Guard troops are being deployed in Washington, DC, as Trump supporters storm the Capitol 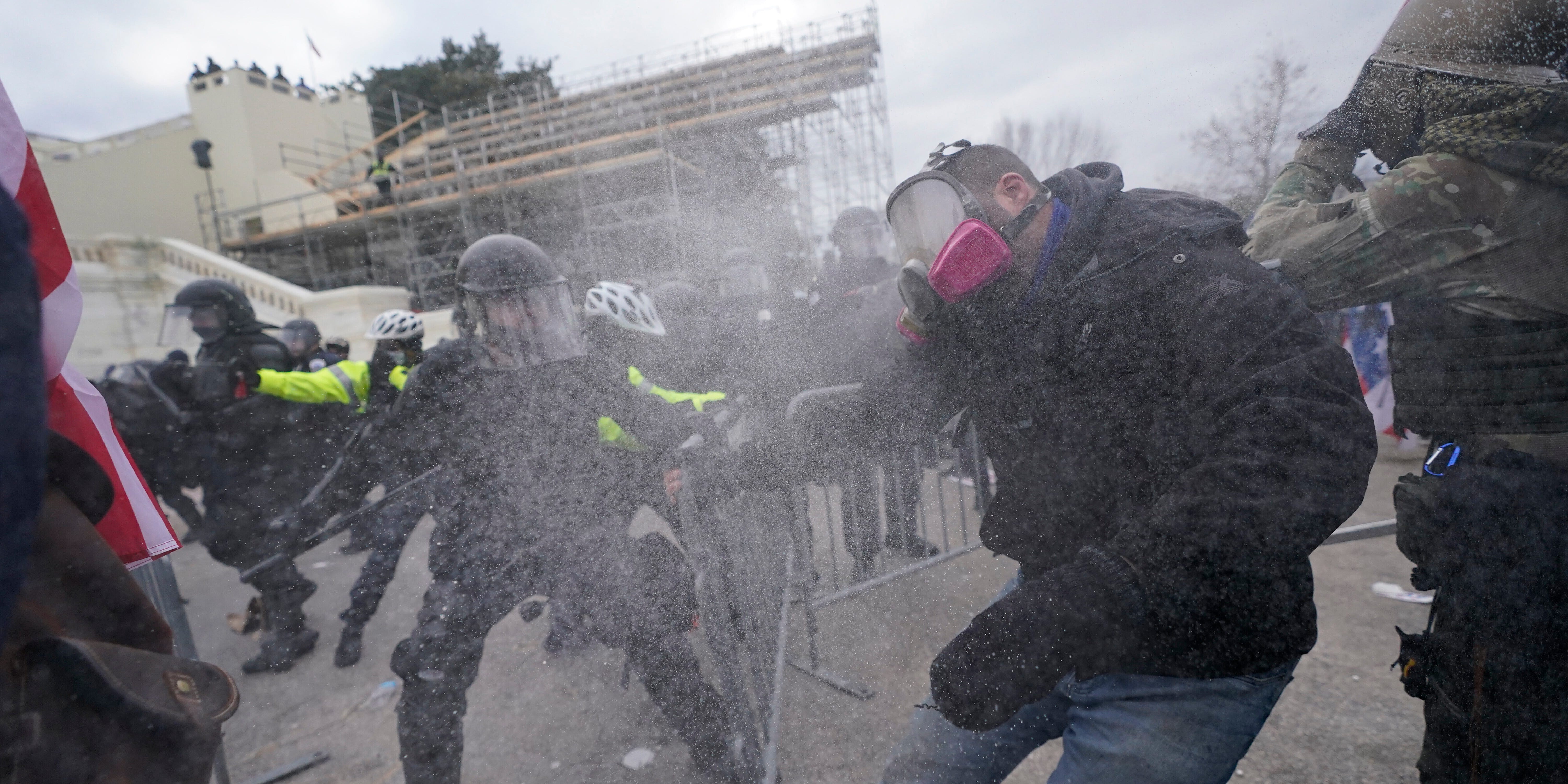 AP Photo/Julio CortezTrump supporters try to break through a police barrier on January 6 at the Capitol in Washington, DC.

As Trump supporters stormed the US Capitol Wednesday to challenge congressional efforts to certify President-elect Joe Biden’s win, it was announced more National Guard troops were being deployed to Washington, DC.

Virginia Gov. Ralph Northam announced he was sending additional National Guard troops into the city Wednesday afternoon. In addition to the Guard members, he said he was sending 200 Virginia state troopers in response to a request from DC Mayor Muriel Bowser.

My team and I are working closely with @MayorBowser, @SpeakerPelosi, and @SenSchumer to respond to the situation in Washington, D.C.

Per the Mayor's request, I am sending members of the Virginia National Guard along with 200 Virginia State Troopers.

The Pentagon announced in a statement shortly after Northam’s tweet that “the DC Guard has been mobilized to provide support to federal law enforcement in the District.” It said the “law enforcement response will be led by the Department of Justice.”

“We have fully activated the DC National Guard to assist federal and local law enforcement as they work to peacefully address the situation,” acting Defence Secretary Chris Miller said in a follow-on statement.

“We are prepared to provide additional support as necessary and appropriate as requested by local authorities,” he said. “Our people are sworn to defend the constitution and our democratic form of government and they will act accordingly.”

White House press secretary Kayleigh McEnany said on Twitter that the additional DC National Guard troops are being activated and deployed at the direction of President Donald Trump.

At President @realDonaldTrump’s direction, the National Guard is on the way along with other federal protective services.

We reiterate President Trump’s call against violence and to remain peaceful.

Trump spoke at Wednesday’s protest before the march on the Capitol and spread falsehoods about the election. After a period of silence as his supporters clashed with police and forced their way into the Capitol, the president called for peace on Twitter.

Maryland Gov. Larry Hogan announced Wednesday afternoon that he was sending in additional law enforcement to support local authorities in Washington as well.

At my direction, the @MDSP is sending in troopers to assist the Metropolitan Police Department and the United States Capitol Police. I have instructed the Adjutant General of the @MDNG to call up a rapid response force to support law enforcement and restore order.

Later, Hogan said that he is mobilizing 500 Maryland National Guard troops “to help restore law and order” in Washington.

“I never thought I’d see a day like this in America,” he wrote on Twitter. “I am not going to stand for this, and neither should any American.”

I never thought I’d see a day like this in America. I am not going to stand for this, and neither should any American.

In addition to sending in 200 @MDSP troopers, after speaking to the Secretary of the Army, I am mobilizing 500 @MDNG members to help restore law and order. pic.twitter.com/Dk72JflkXy

Ahead of the protests, 340 National Guard troops were activated in Washington to support local law enforcement. The unarmed guard troops were primarily tasked with traffic and checkpoint management.

On Wednesday, the mayor requested full activation of the DC National Guard when the Capitol was breached. There was, however, some initial confusion surrounding the request, Secretary of the Army Ryan McCarthy acknowledged Wednesday afternoon.

The decision to activate 100 per cent of the National Guard was made about half an hour after the request first came in, he said.

National Guard troops were deployed to Washington over the summer in response to large-scale protests calling for racial justice in the wake of the killing of an unarmed Black man in police custody. More than 2,000 guard members were called in from both inside and outside Washington.

At one point in early June, the Pentagon also had about 1,600 active-duty troops in position outside the city to provide additional support, but they ultimately returned to their home bases without entering the city.

Update: This post has been updated with a statement from Maryland Gov. Larry Hogan on the deployment of hundreds of Maryland National Guard troops to DC.