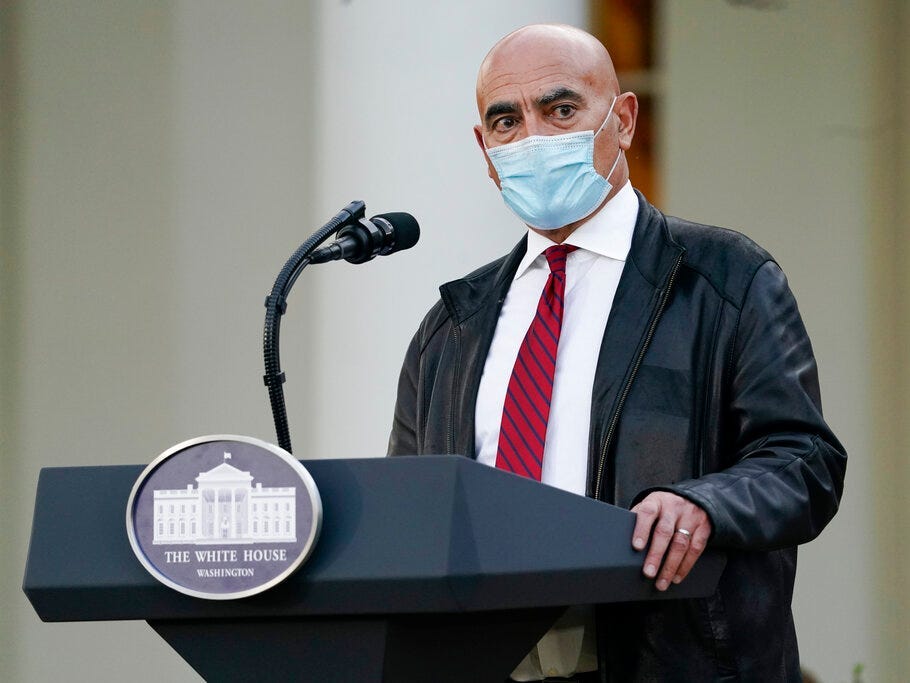 The co-leader of the US government’s Operation Warp Speed coronavirus vaccine initiative on Wednesday outlined the most ambitious timeline yet for vaccinating the most vulnerable Americans against COVID-19.

Moncef Slaoui, Warp Speed’s chief advisor, predicted that 100 million Americans would be immunized by the end of February.

Twenty million Americans should be vaccinated in December, followed by 30 million more in January and 50 million more in February, the former pharmaceutical executive said in a press briefing.

By then, “we will have potentially immunized 100 million people, which is really more or less the size of the significant at-risk population: the elderly, the healthcare workers, the first-line workers, people with comorbidities,” Slaoui said.

His prediction is based on anticipated vaccine supplies from Pfizer and Moderna, the two vaccine frontrunners. Neither vaccine has yet received an emergency OK from US regulators, but both companies have submitted their shots to the US Food and Drug Administration for evaluation.

A former pharmaceutical industry executive, Slaoui was picked by the Trump administration in mid-May to guide the US effort to quickly develop coronavirus vaccines and treatments. He spent 30 years working at the drugmaker GlaxoSmithKline, where he developed 14 vaccines, according to USA Today. More recently, he served on the board at Moderna, but stepped down from that role when he signed on with Operation Warp Speed.

Slaoui, who’s a registered Democrat, has taken pains to distance the Warp Speed program from political pressure. He has repeatedly said he would resign if he felt interference from political operatives.

Results from late-stage studies that enrolled tens of thousands of volunteers indicated that both vaccines were highly effective â€” about 95% â€” at preventing symptomatic COVID-19 compared with a placebo. Questions remain about how durable that protection is and whether the vaccines also reduce transmission and prevent asymptomatic infections.

The FDA is now reviewing both vaccine applications and is expected to issue decisions on emergency authorizations before the year’s end. British health authorities authorised Pfizer’s vaccine on Wednesday, making the UK the first Western country to approve a coronavirus vaccine.

Warp Speed is prepared to start shipping doses to states within a day or two of an authorization decision, officials said. The federal government is splitting up limited doses proportionally to each state’s population, with governors deciding where Warp Speed ships the doses in their states.

State officials will also be responsible for ultimately deciding which Americans are the first to get the vaccines, which are given as a two-dose regimen. An advisory group to the Centres for Disease Control and Prevention recommended that frontline healthcare workers and nursing-home residents get the highest priority.

Warp Speed has spent billions to secure supplies from these leading drugmakers.

Slaoui also said he expected additional experimental COVID-19 vaccine programs run by Johnson & Johnson and AstraZeneca to produce definitive data in January. If either or both of those vaccines were to secure a regulatory green light, that would add further upside to Warp Speed’s supply projections, he said.


Read more:
Inside Moderna’s historic coronavirus vaccine program that transformed the biotech upstart into a $US57 billion drug industry powerhouse

Slaoui’s become more optimistic about the pace of vaccinations in the US. In mid-November, he said about 70 million to 80 million people in the US were likely to be vaccinated by the end of February.