The Saudi crown prince has reportedly detained 3 royal family members for unknown reasons. Meet 34-year-old Mohammed bin Salman, who's at the centre of human rights issues and drops millions on yachts and mansions. 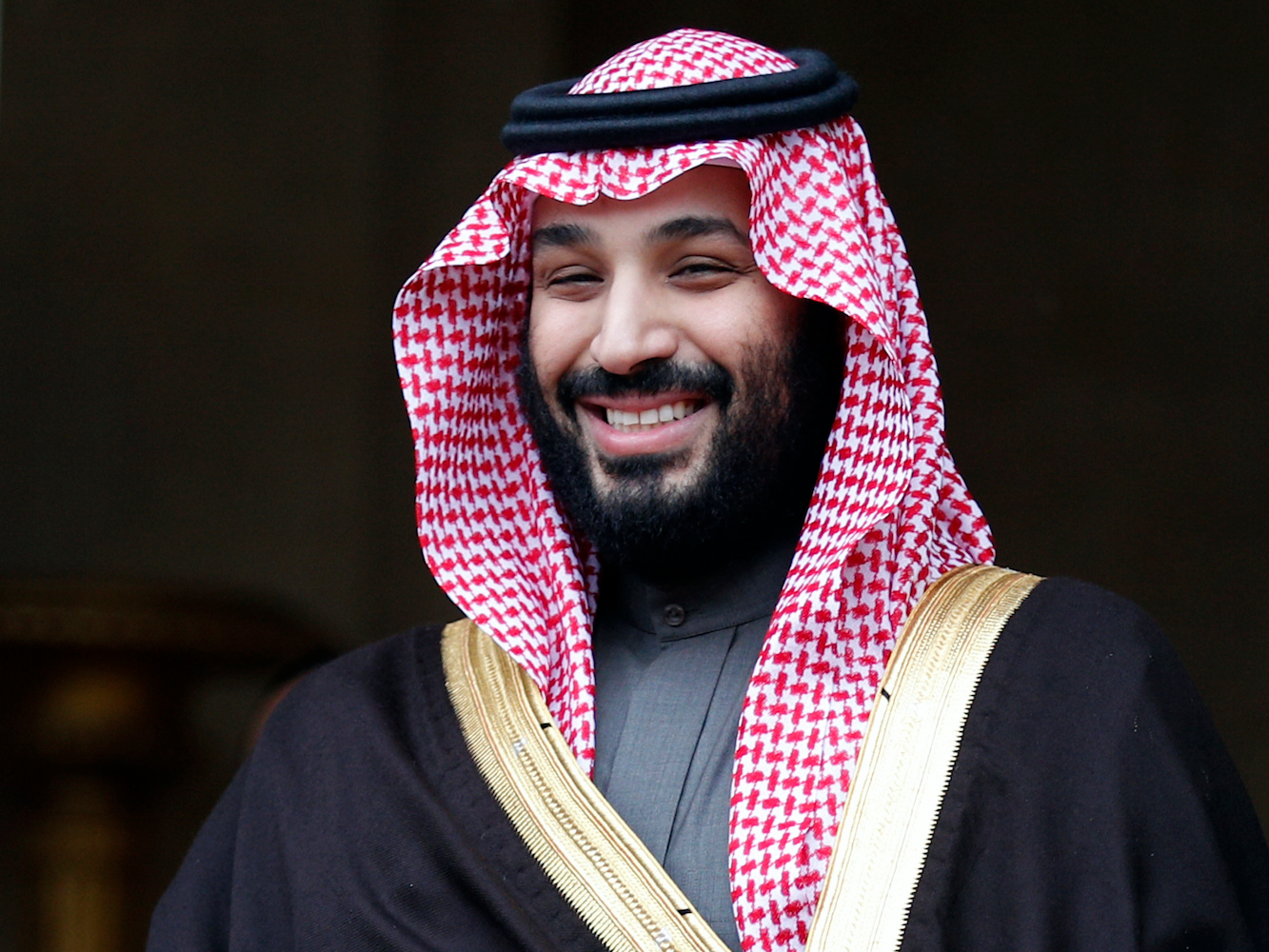 AP Photo/Francois MoriThe 34-year-old heir will ascend to the throne after the death of his father, 84-year-old King Salman bin Abdulaziz Al Saud.

The 34-year-old heir will ascend to the throne after the death of his father, 84-year-old King Salman bin Abdulaziz Al Saud. The crown prince has become a controversial global political figure, particularly so in the fall of 2018, when he faced global outcry over the deathof journalist Jamal Khashoggi, who the CIA later concluded was assassinated on the prince’s orders. In January, he was accused of hacking the personal cell phone of Amazon CEO Jeff Bezos, an allegation the Saudi embassy called “absurd.”

Prince Mohammed is known for his lavish spending. He has bought a $US500 million yacht, a $US300 million French chateau, and a $US450 million Leonardo da Vinci painting. According to one estimate, the Saudi royal family – which has about 15,000 members – is worth up to $US1.4 trillion.

The royal family’s empire includes Saudi Aramco, the massive, state-owned oil company became the most valuable company in the world when it went public in December 2019.

Here’s a look at the lavish – and controversial – lifestyle of Crown Prince Mohammed bin Salman. 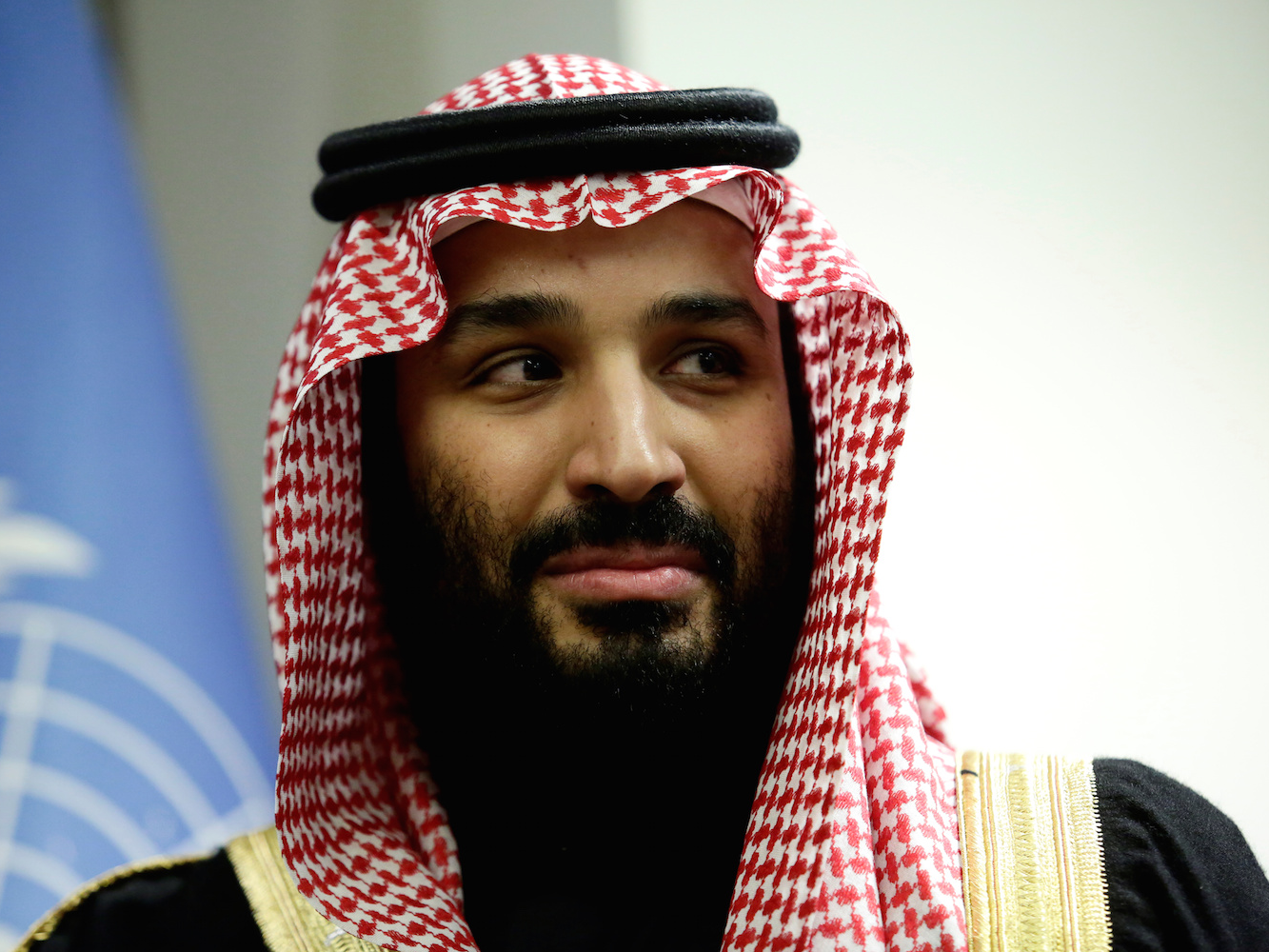 He was born to King Salman and his third wife, Fahda bint Falah, in 1985.

He was named crown price in June 2017 after his father, King Salman, decided to remove Muhammad bin Nayef from the position.

The prince has a bachelor’s degree in law from King Saud University, the oldest university in Saudi Arabia. After graduating, he worked for several state agencies before being appointed as a special adviser to his father in 2009, who was serving as governor of Riyadh at the time.

In 2012, Prince Mohammed’s father was named crown prince after the death of Nayef bin Abdul Aziz. Three years later, King Abdullah bin Abdul Aziz died and the prince’s father took the throne at the age of 79.

Prince Mohammed is not yet king, but he “essentially runs the country for his father,” 84-year-old King Salman bin Abdulaziz, according to Bloomberg. 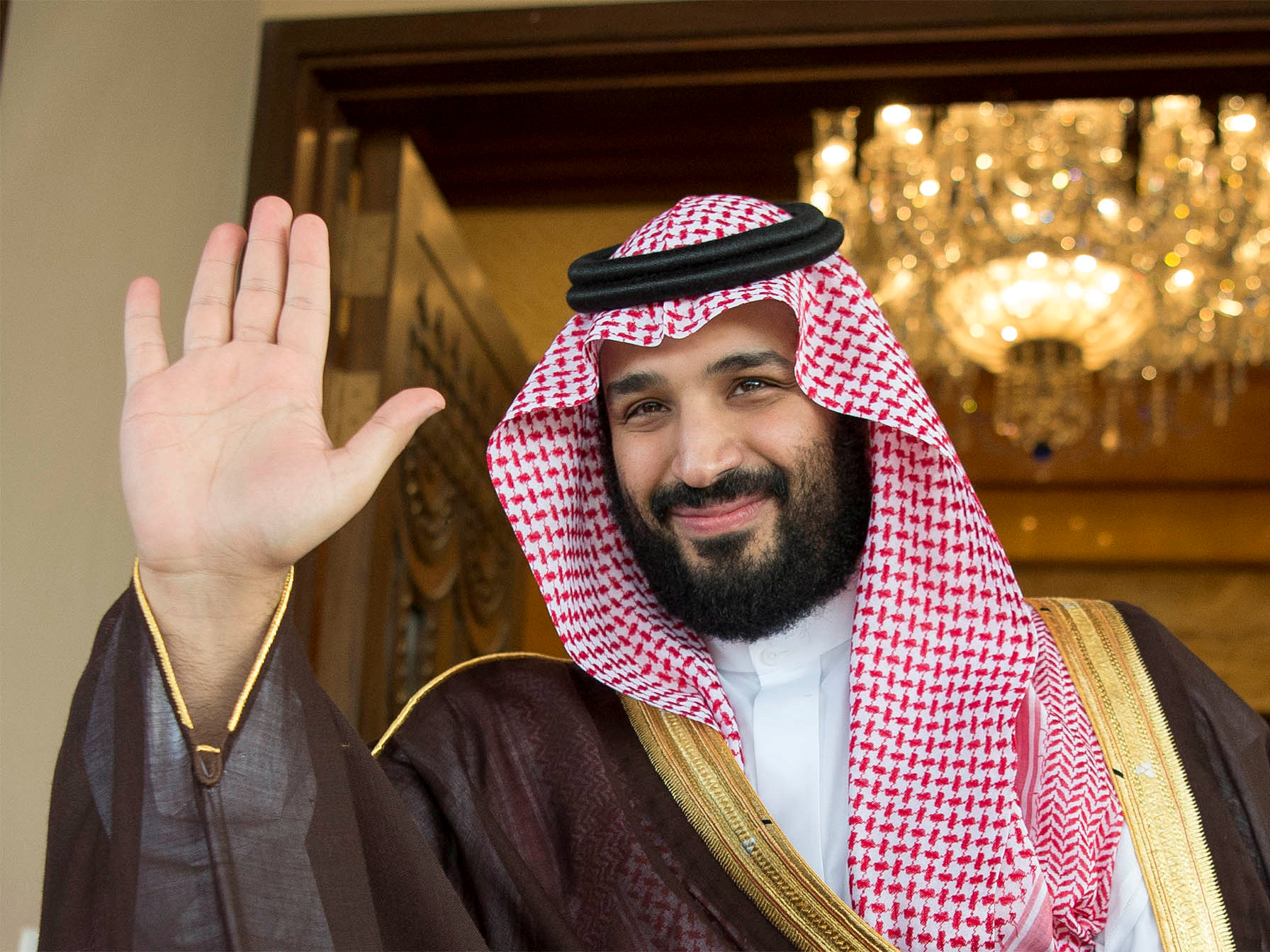 The prince is known to be a “workaholic” who spends 18 hours of the day in his office, according to The Guardian.

“People who tried to say no even gently and diplomatically faced consequences,” one source from Saudi Arabia told The Guardian.

The total wealth of the Saudi royal family is unknown, but it could be worth as much as $US1.4 trillion, according to House of Saud, an English-language Saudi Royal Family news resource. 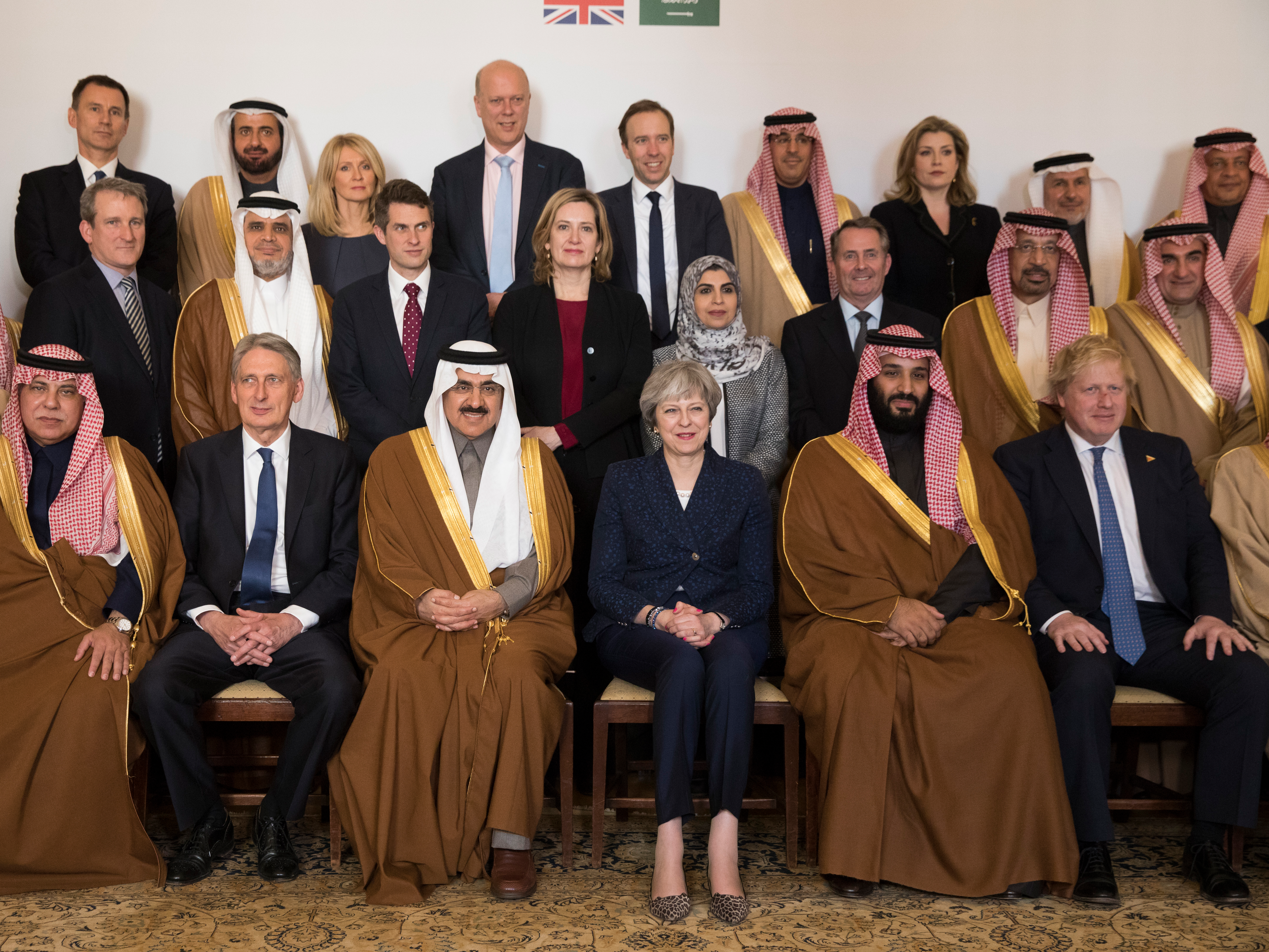 The royal wealth has been accumulated over decades of oil revenue-generated expansion.

There are about 15,000 members of the Saudi royal family, but the majority of the vast fortune is distributed among 2,000 of them, according to CNBC.

The British royal family, for comparison, is worth an estimated $US88 billion.

The Saudi royal family’s empire includes Saudi Aramco, the state-owned oil giant that reached a record-high valuation of $US2 trillion after going public in December 2019. That makes it the most valuable company in the world, outstripping the market capitalizations of the biggest US giants, including Microsoft, Apple, and Google’s parent, Alphabet.

It’s worth more than Berkshire Hathaway, Facebook, and Amazon combined.

Saudi officials had been seeking a valuation of $US2 trillion for the company, but most banks had pegged their initial estimates much lower, Bloomberg reported.

Aramco announced revenue of $US68 billion in the first nine months of 2019, making it the most profitable company in the world.

Prince Mohammed and his father, King Salman, are often found in “a network of marble-columned palaces and countryside retreats” in Riyadh, according to The New York Times. 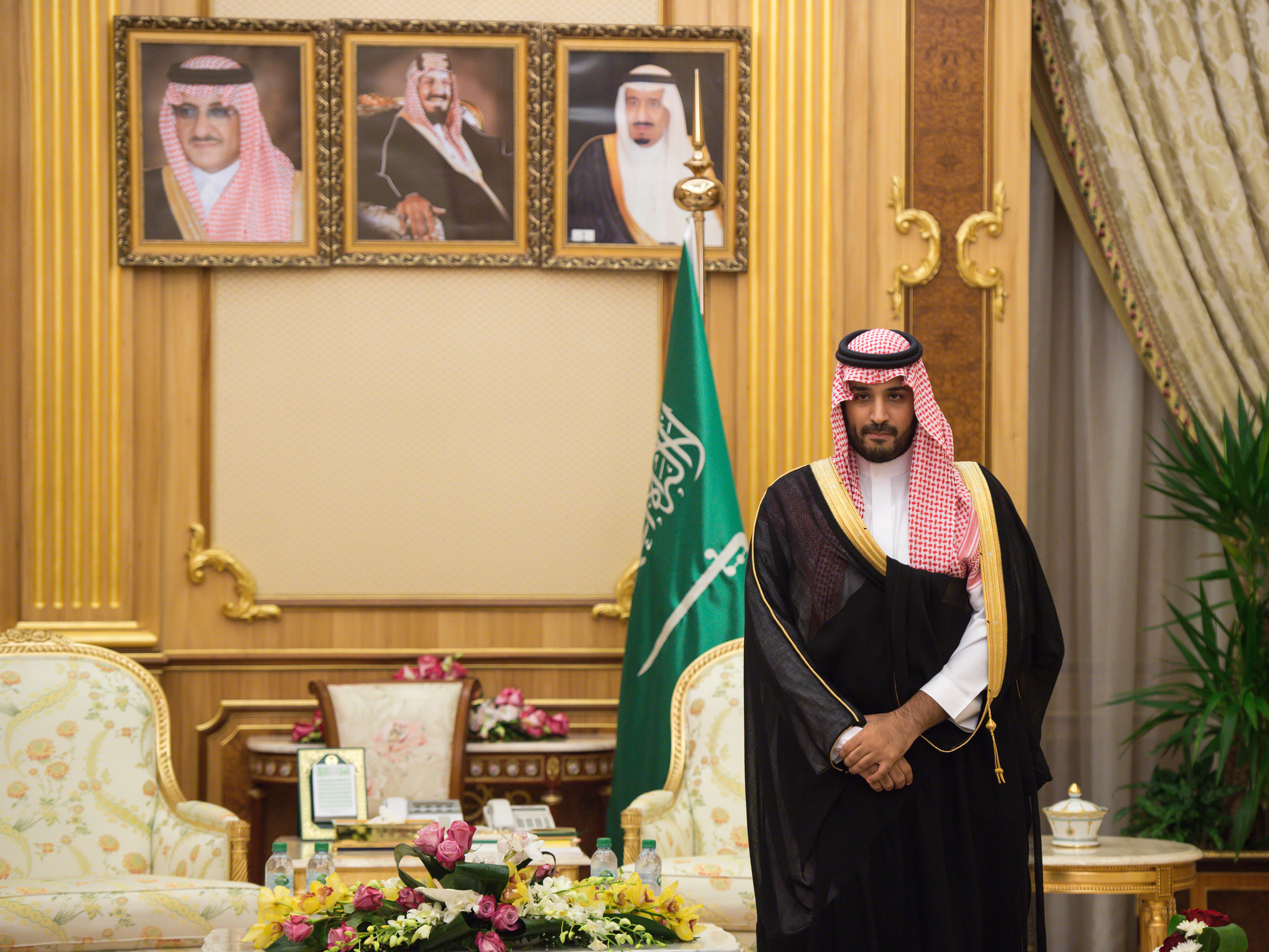 Bernd von Jutrczenka/picture alliance via Getty ImagesPrince Mohammed at one of the Riyadh royal palaces in October 2015.

Foreign dignitaries and politicians are often hosted at the Al-Yamamah Palace.

During a visit from President Obama to the opulent Erga Palace, reporters spotted gold-plated Kleenex dispensers and gold chairs, according to CBS News.

The royal family is rumoured to own several other lavish residences around the world, including in Switzerland, London, France, and Morocco.

Prince Mohammed is known for his extravagant purchases. The prince reportedly bought the superyacht after spotting it while vacationing in the south of France.

In 2015, Prince Mohammed bought a chateau in France for $US300 million, which was dubbed “the world’s most expensive home” by Fortune at the time. It wasn’t until 2017 that news broke that it was the Saudi prince who had bought the Chateau Louis XIV in Louveciennes, which is located west of Paris.

The 17th-century chateau reportedly includes fountains, a sound system, lights, and air conditioning that can all be controlled by an iPhone.

The lavish property also has a wine cellar, a movie theatre, and a moat with a transparent underwater chamber.

The prince also picked up a Leonardo da Vinci painting for $US450 million at a Christie’s auction in 2017. The painting had been estimated to sell for around $US100 million leading into the auction.

Prince Mohammed has been in the news in recent years for a variety of scandals.

Saudi Arabia has faced criticism for human rights abuses and repressive laws, such as the one that says all Saudi women must have a male guardian.

In February 2019, INSIDER published an investigation detailing how a Saudi app called Absher allows men in Saudi Arabia to track and control where women travel. The reporting prompted Apple CEO Tim Cook to launch an investigation into the app, which is sold on the App Store.

In the fall of 2017, the crown prince was reportedly behind a corruption crackdown that saw more than 200 people arrested and some detained for weeks in a Ritz-Carlton hotel.Saudi Arabia reportedly use coercion and physical abuse during the interrogations.

And according to Al Jazeera, the number of executions in Saudi Arabia has been on the rise: 133 people were executed in the first eight months after MBS became crown prince.

In the fall of 2018, the crown prince faced global outcry over the death of journalist Jamal Khashoggi in the Saudi embassy in Istanbul. ReutersA demonstrator holds a poster with a picture of Saudi journalist Jamal Khashoggi outside the Saudi Arabia consulate in Istanbul.

In November 2018, the CIA concluded the journalist was assassinated on the prince’s orders.

Saudi Arabia has repeatedly denied that the crown prince had any role in Khashoggi’s death.

The Saudis denied for weeks that Khashoggi had been killed and repeatedly changed their story. The kingdom later announced that 18 people had been arrested in connection with the killing and said in January 2019 that prosecutors would be seeking the death penalty for five suspects.

While many world leaders have publicly condemned Prince Mohammed after Khashoggi’s death, President Trump has said we may never know if Prince Mohammed ordered the killing of the journalist or not. After the CIA concluded that MBS ordered the killing of Khashoggi, Trump expressed support for MBS, Al Jazeera reported in December 2018.

As Business Insider previously reported, Trump has had deep business ties with the Saudi Arabian court for more than two decades.

And Jared Kushner, the president’s son-in-law, has reportedly pushed for closer ties with Saudi Arabia and particularly with Prince Mohammed.

Kushner and the crown prince have had a close relationship for more than 2 years, Business Insider’s Ellen Cranley reported.

At the G20 Summit in Argentina in December 2018, Russian President Vladimir Putin was seen enthusiastically greeting the Saudi prince. Putin’s enthusiastic greeting of the Saudi prince at G20 came right after other world leaders had condemned Saudi Arabia for the killing of Khashoggi.

Other world leaders appeared to ignore the crown prince in a group photo at the summit.

Beyond politics, the prince has ties to top US technology companies and has toured some of Silicon Valley’s top firms, including Google and Apple.

Saudi Arabia’s Public Investment Fund owns 5% of Uber, according to the ride-sharing company’s most recent S-1 filing. The fund is also a top investor in Softbank’s massive Vision Fund, which owns 16% of Uber as well as sizable stakes in companies like Slack, WeWork, and DoorDash.

In January 2020, the United Nations said it had received credible information that Amazon CEO Jeff Bezos had his phone hacked by Prince Mohammed. 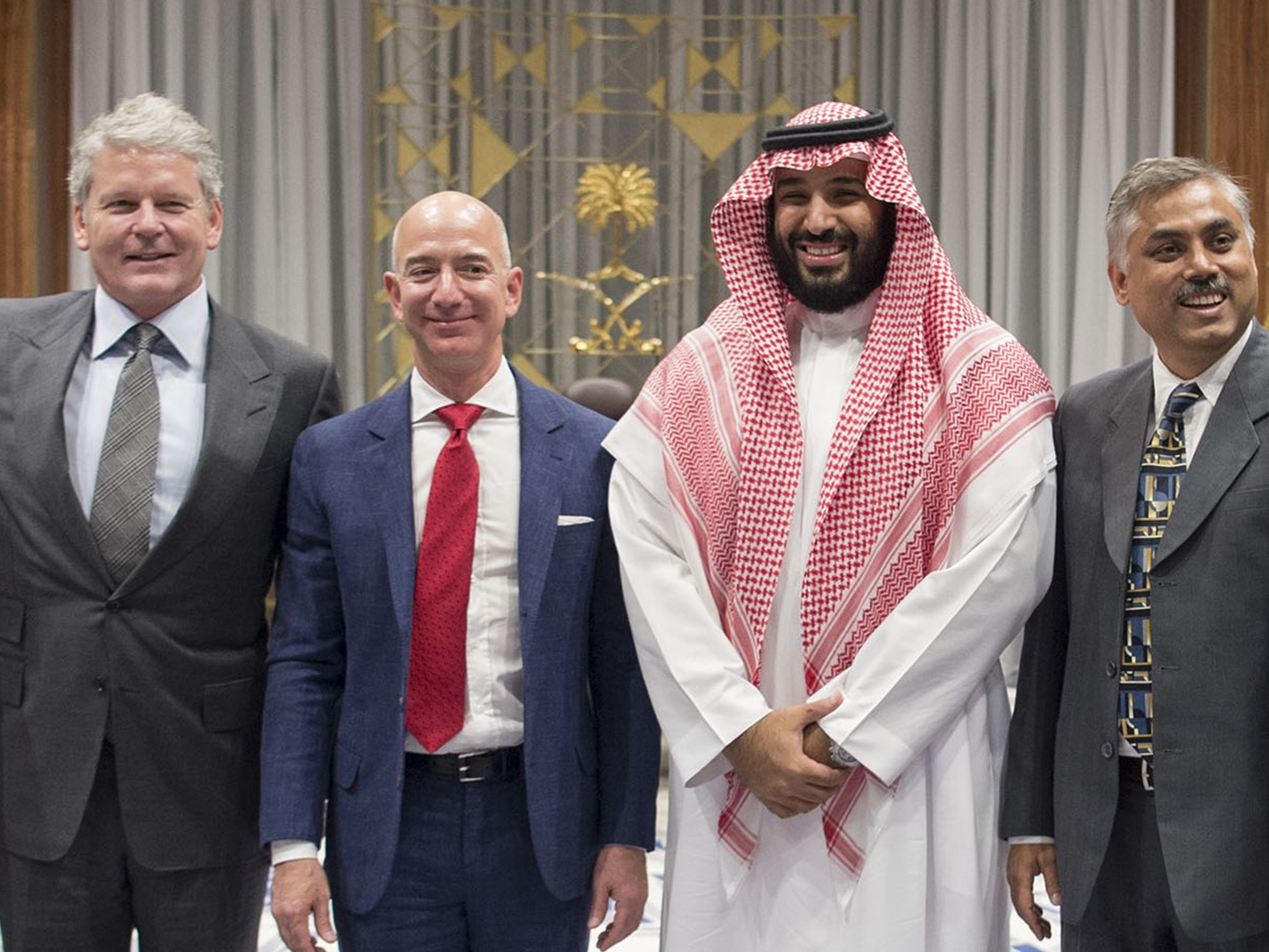 The UN called for an “immediate investigation by US and other relevant authorities” into the matter of Bezos reporting his phone being hacked.

According to the UN report, Bezos gave Prince Mohammed his personal phone number after the two attended a small dinner together in Los Angeles in April 2018. A month later, the crown prince allegedly sent a malicious file to Bezos’ phone that stole data from the device.

The Saudi government has denied the allegations, calling them “absurd.”