Moderna's coronavirus vaccine can cause severe fatigue and aches and pains. Two top vaccine experts told us why they think you'll still take it. 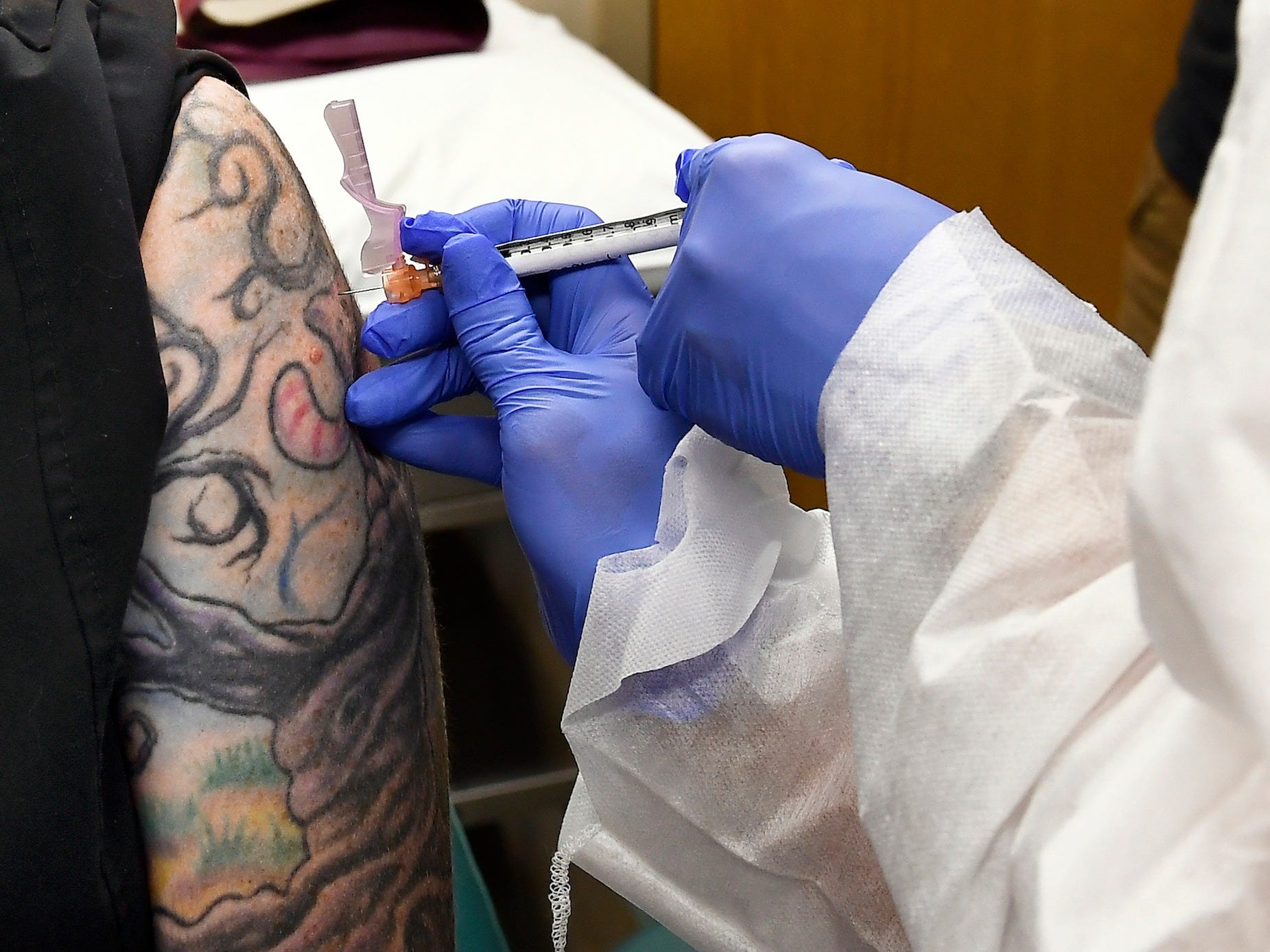 Hans Pennink/AP PhotoModerna COVID vaccine trial volunteer receives injection that could be the vaccine. Data’s been released that provides an indication of possible side effects.

We just got our most detailed look yet at the side effects of one of the first effective coronavirus vaccines.

The biotech company Moderna provided a summary of the side effects its vaccine can cause when it reported positive interim results for the vaccine in a press release.

Moderna’s vaccine, like Pfizer’s, is more than 90% effective. Both vaccines use messenger-RNA-based technology, and their apparent success bodes well for the new vaccine platform. Pfizer didn’t provide information on side effects, but said there were no serious safety issues with its vaccine.

However, like most good things in life, where there is a benefit, risks must be considered as well.

It’s important to understand the side effects and communicate them to people ahead of time, so they don’t come as a surprise, said Dr. Jesse Goodman, a former top scientist at the US Food and Drug Administration.

He said that if Moderna’s vaccine works well at preventing COVID-19, and the side effects don’t last too long, people will take it.

“If the efficacy of the vaccine in the study remains high, I think most people will consider that a reasonable trade-off,” said Goodman, who is now the director of the Centre on Medical Product Access, Safety and Stewardship at Georgetown University.

Moderna said that its vaccine was “generally well tolerated,” and that most adverse events, or side effects, were mild or moderate.

Moderna’s immunization is given as two shots, spaced 28 days apart. Most of the severe side effects occurred after participants got the second dose.

The side effects of Moderna’s shot

The one serious side effect that occurred after the first dose was injection site pain, reported by 2.7% of participants.

Here are the severe side effects that people in the trial reported after the second dose:

Moderna said the side effects were “generally short-lived,” but didn’t provide more information. It’s worth noting that these are “solicited” adverse events, which means the results only include certain side effects that Moderna asked about.

More information is needed on the side effects

Dr. Lisa Fitzpatrick is an infectious disease specialist and medical epidemiologist who helped craft President-elect Joe Biden’s healthcare policy. She’s also a participant in the Moderna vaccine trial. She signed up to demonstrate that vaccine trials are voluntary and safe, which she’s explained in an article for Business Insider.

Fitzpatrick doesn’t know whether she’s receiving the vaccine or a salt water solution, known as a placebo. However, in terms of side-effects, she wrote that she experienced arm pain and aches and some fatigue, and that the side effects got better in about 12 hours.

With the information currently available from Moderna, we don’t know the exact length of time people can expect to experience each side-effect after receiving the vaccine.

Dr. Paul Offit, director of the Vaccine Education Centre at Children’s Hospital of Philadelphia, said that knowing more about the vaccine’s side effects is also important because it might inform how health officials plan to deliver vaccines. For instance, hospitals might not want to give them to all their workers at once, in case a lot of them experience fatigue after getting the shot, he said.

“You wouldn’t want to vaccinate your entire Emergency Department workforce only to have them miss the next day,” Offit told Business Insider.

“A staggered approach might solve this issue if we know about it,” he added.

Side effects don’t always put us off

Side effects such as muscle aches and a fever haven’t put us off vaccinations in the past.

Speaking about Moderna’s shot, Offit provided a useful comparison with the shingles vaccine because it’s also given to adults as two separate shots one month apart.

For example, Shingrix, made by GlaxoSmithKline, is an FDA-approved vaccine that prevents shingles, a painful red rash caused when the virus that causes chickenpox is reactivated.

According to GSK, the vaccine can cause local pain, redness, and swelling. It can also cause muscle aches, fatigue, headaches, shivering, fever, and stomach problems. And yet in general, these side effects don’t dissuade people from getting the shot, Offit said, because of its benefits.

“People get shingles vaccines knowing that they might miss a day of work, because shingles is one of the worst pains in medicine, and this is a virus that has brought us to our knees,” he said.

Both experts acknowledged the limited information in Moderna’s press release and said they wanted to see the full results and a review by regulatory agencies before they can recommend the vaccine.

“Since we’ve never used this vaccine before, we don’t have expected side effects. We’re learning as we go,” Offit said.