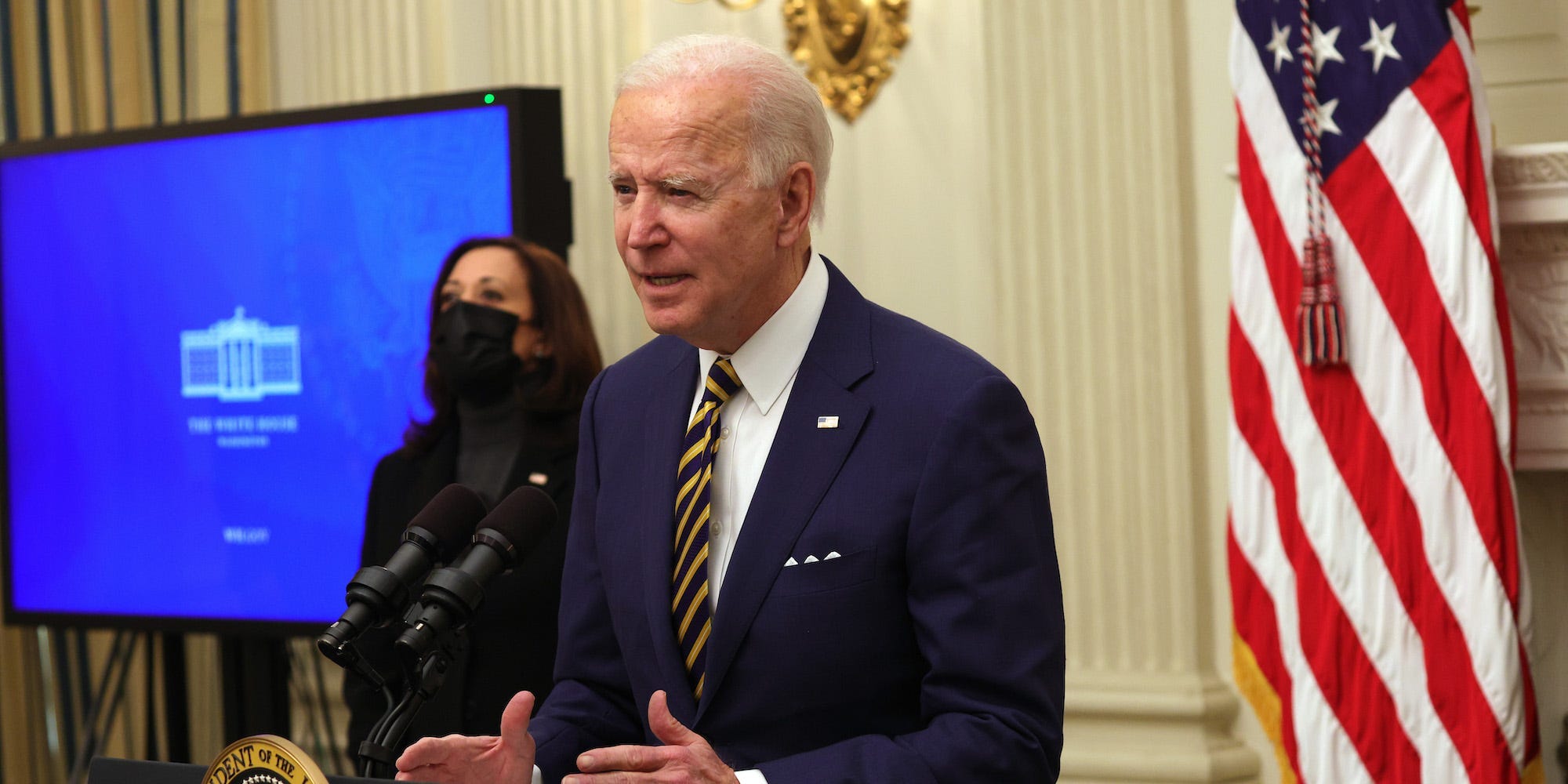 Alex Wong/Getty ImagesPresident Joe Biden speaks as Vice President Kamala Harris looks on during an event on economic crisis in the State Dining Room of the White House January 22, 2021 in Washington, DC.

The Biden administration is moving to garner bipartisan support for the plan. Brian Deese, the National Economic Council Director, said during a press conference on Friday the White House is pitching it to a working group of 16 centrist Democratic and GOP senators in a Sunday call.

“We’re at a precarious moment for the virus and economy,” Deese said during a press conference on Friday. “We risk falling into a very serious economic hole, even more serious than the crisis we find ourselves in.”

The proposal contains measures such as a $US1,400 boost to stimulus checks, enhanced unemployment insurance, aid to state and local governments, and vaccine funds. It needs 10 Republican votes to clear the Senate.

Several moderate Republicans who form part of the bipartisan group, including Sen. Susan Collins of Maine, were sceptical of the plan’s large cost ahead of the meeting.

“It’s hard for me to see when we just passed $US900 billion of assistance why we would have a package that big,” Collins told Insider in a brief Thursday interview on Capitol Hill. “Maybe a couple of months from now, the needs will be evident and we will need to do something significant, but I’m not seeing it right now.”

She added she was “sympathetic” to directed spending on measures like vaccine distribution.

Other GOP senators struck a similar tone. Sen. Bill Cassidy of Louisiana, a member of the Senate Finance Committee that presides over economic matters, said he wanted to hear “justification” from the White House about why Congress needed to enact another large rescue package.

“It seems to be trying to go after things that have already been addressed,” Cassidy said in a recent Capitol Hill interview, adding it didn’t appear to be “targeted” spending. He was critical of a provision to enact a $US400 federal unemployment benefit until September.

Then Sen. Mitt Romney of Utah told reporters on Friday: “My focus is to see where’s the need, and let’s make sure that the numbers are real based upon need, as opposed to simply looking for more stimulus.”

Many experts are urging lawmakers to support robust federal spending to combat the economic and public health devastation caused by the pandemic. The economy shed 140,000 jobs last month, and the number of Americans who have died from COVID-19 reached 412,000 on Friday â€” surpassing the number of US combat dead in World War II.

Yet rising Republican resistance against the emergency spending package is creating a path laden with obstacles for the Biden administration. The administration’s drive to gain GOP votes may require scaling back many components of the rescue plan when Congressional Democrats want to pump a big amount of federal dollars into the economy.

Democrats could opt for a legislative manoeuvre called budget reconciliation to circumvent Republicans in a chamber split 50-50. That only needs a simple majority, though Democratic control of the Senate hinges on a tie-breaking vote from Vice President Kamala Harris.

The process sets up a very slim margin for error and the blueprint could shed provisions like a $US15 minimum wage to comply with strict budgetary rules. President Barack Obama used it to enact the Affordable Care Act a decade ago, while Republicans approved a large corporate tax cut in 2017 under President Donald Trump.

It may also be a time-consuming procedure at a moment the White House is eyeing swift action to fight the pandemic. Democrats have not ruled out using it to pass economic relief.

“There’s clearly an interest in being bipartisan wherever you can,” Sen. Ron Wyden of Oregon, incoming chair of the Senate Finance Committee, said in an interview on Friday. “But when there’s an effort to tie everything up in knots just to prevent coming through for people who are jobless and hungry, and really can barely keep a roof over [their] head, then you gotta act.”

Other hurdles complicating the timeline of a relief bill include a second Trump impeachment trial and confirmation of Biden’s cabinet nominees. Republican and Democratic Senate leaders struck an agreement on Friday to delay the start of the trial for two weeks, though they haven’t reached a deal on the filibuster.

Meanwhile, Biden signed an executive order to boost food stamps and accelerate the delivery of stimulus checks to millions of eligible Americans who didn’t already receive one.

“We cannot, will not let people go hungry. We cannot let people be evicted because of nothing they did themselves. They cannot watch people lose their jobs,” Biden said at a signing ceremony on Friday. “And we have to act. We have to act now.”