19 stunning kids who look just like their supermodel mums 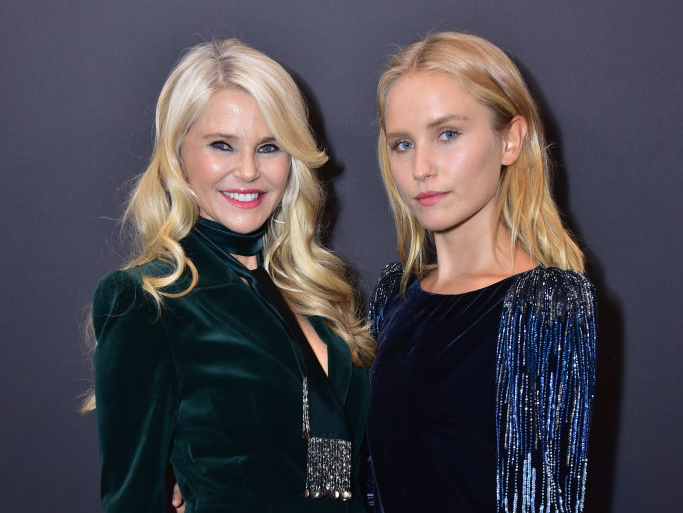 The ’70s and the ’80s were the supermodel glory days, when women like Cindy Crawford, Christie Brinkley, and Beverly Johnson dominated the fashion scene.

Now, a new crop of models are appearing on runways, in magazines, and campaigns – and many of them are the children of former supermodels.

Yolanda Hadid supported her daughters Gigi and Bella Hadid in their rise to stardom, while Christie Brinkley and daughter Sailor previously shared a runway at New York Fashion Week.

Take a look at celebrity mums who passed on their modelling legacy – and genes – to their children. 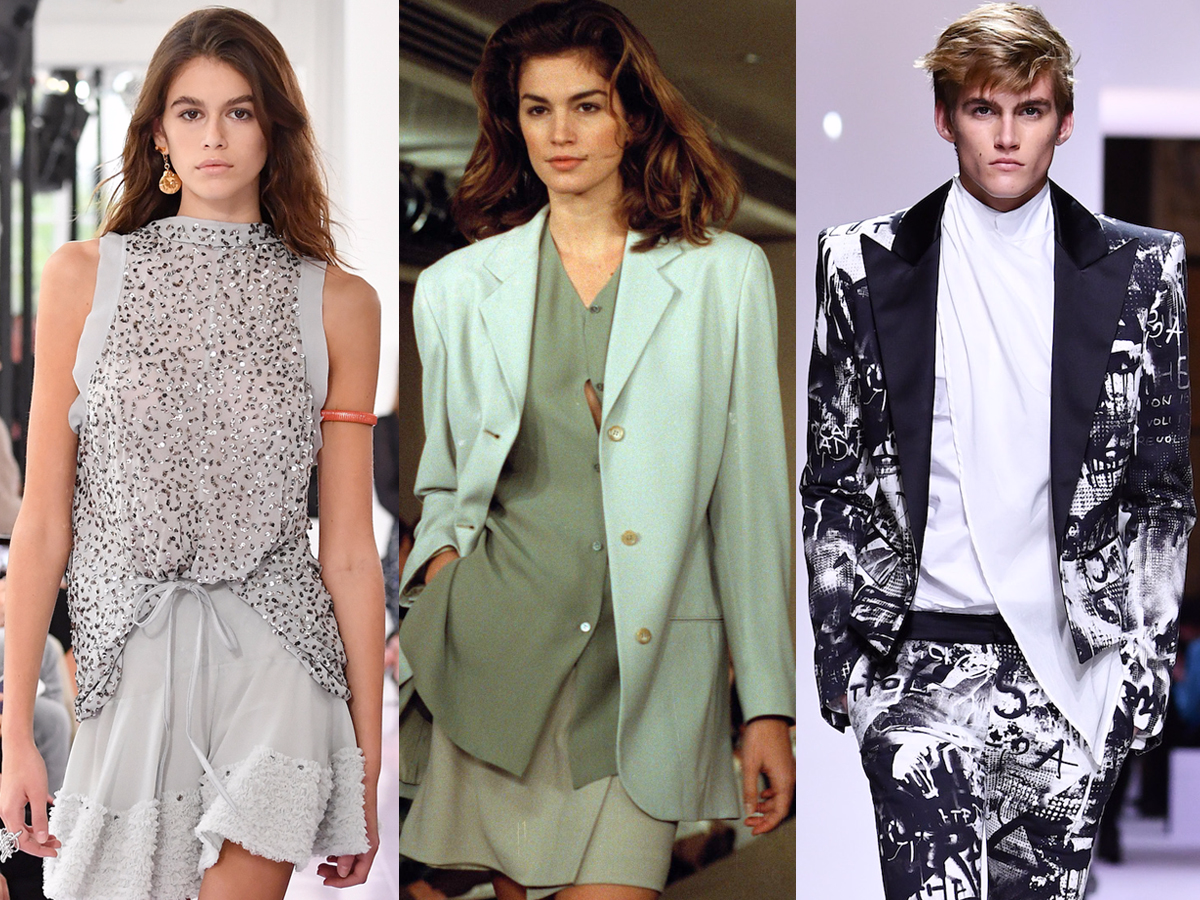 Cindy Crawford is a living legend in the fashion industry. She made a name for herself doing commercial jobs like her iconic Diet Pepsi commercial, while also landing high fashion gigs like walking for Versace. Her work landed her in the elite mix of ’80s and ’90s supermodels, known as “The Big Five,” along with Naomi Campbell, Linda Evangelista, Claudia Schiffer, Christy Turlington, and later, Stephanie Seymour.

Crawford and her daughter Kaia Gerber could almost pass as twins. The rising model has inherited her mum’s genes, and has worked with brands like Calvin Klein, Marc Jacobs, Saint Laurent, and Versace.

Kaia’s brother, Presley Gerber, is also making a name for himself in print and on the runway. In January 2018, Presley joined Kaia as the face of Calvin Klein Jeans’ global advertising campaign, and then walked for Balmain at Men’s Paris Fashion Week 2018. Christie Brinkley was an aspiring artist living in Paris when she was discovered by a photographer. She landed her first Sports Illustrated cover in 1979, and appeared on the cover again in 1980 and 1981.

Brinkley made a splash in the fashion world when she returned to Sports Illustrated in 2017, posing alongside her daughters Sailor Brinkley Cook and Alexa Ray Joel.

She and Sailor have previously shared a runway at New York Fashion Week.

Yolanda Hadid has clearly passed on her modelling skills to daughters Gigi and Bella Hadid. 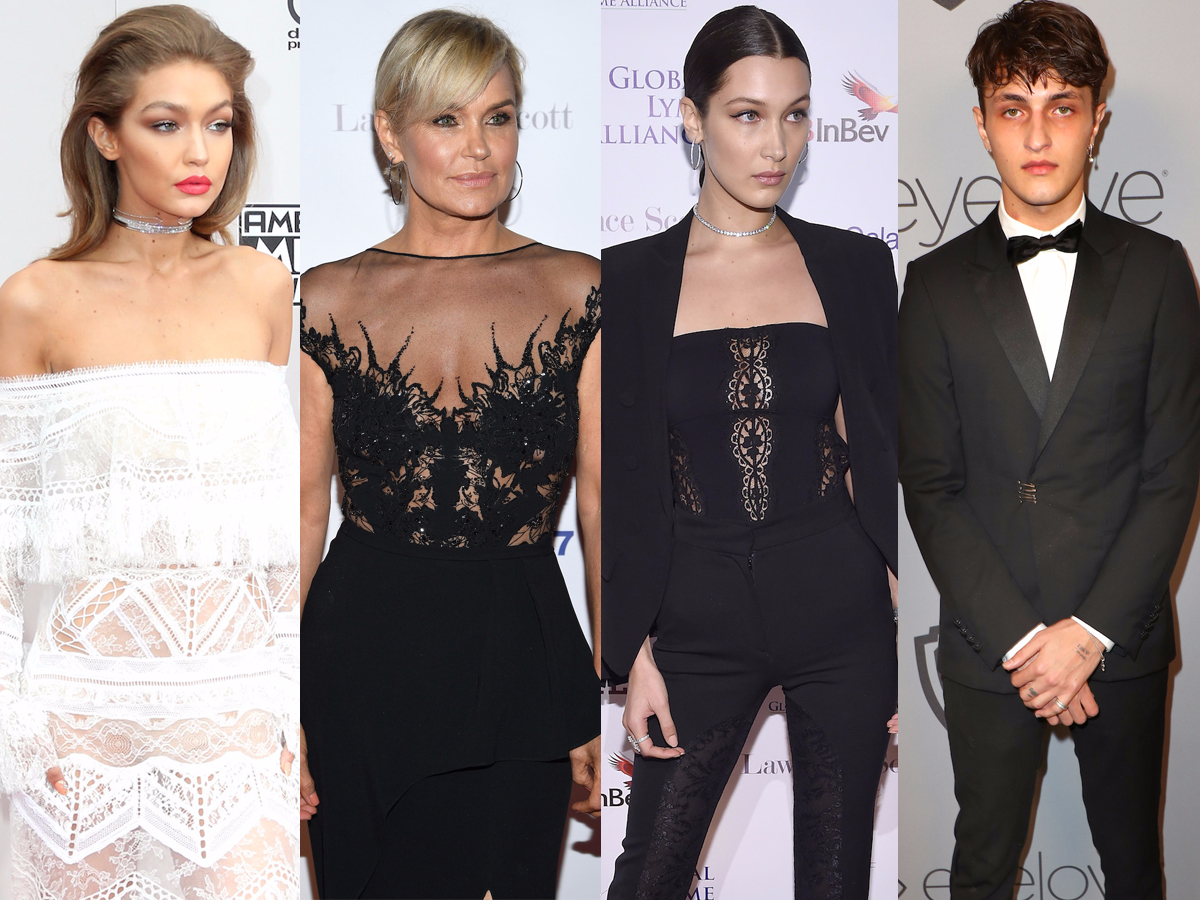 Yolanda Hadid started her career as a young model signed to Ford Models, according to the New York Post. She left the Netherlands for New York City and launched a successful career before marrying Mohamed Hadid, and later David Foster.

Pat Cleveland and daughter Anna Cleveland share the same charisma on the catwalk. 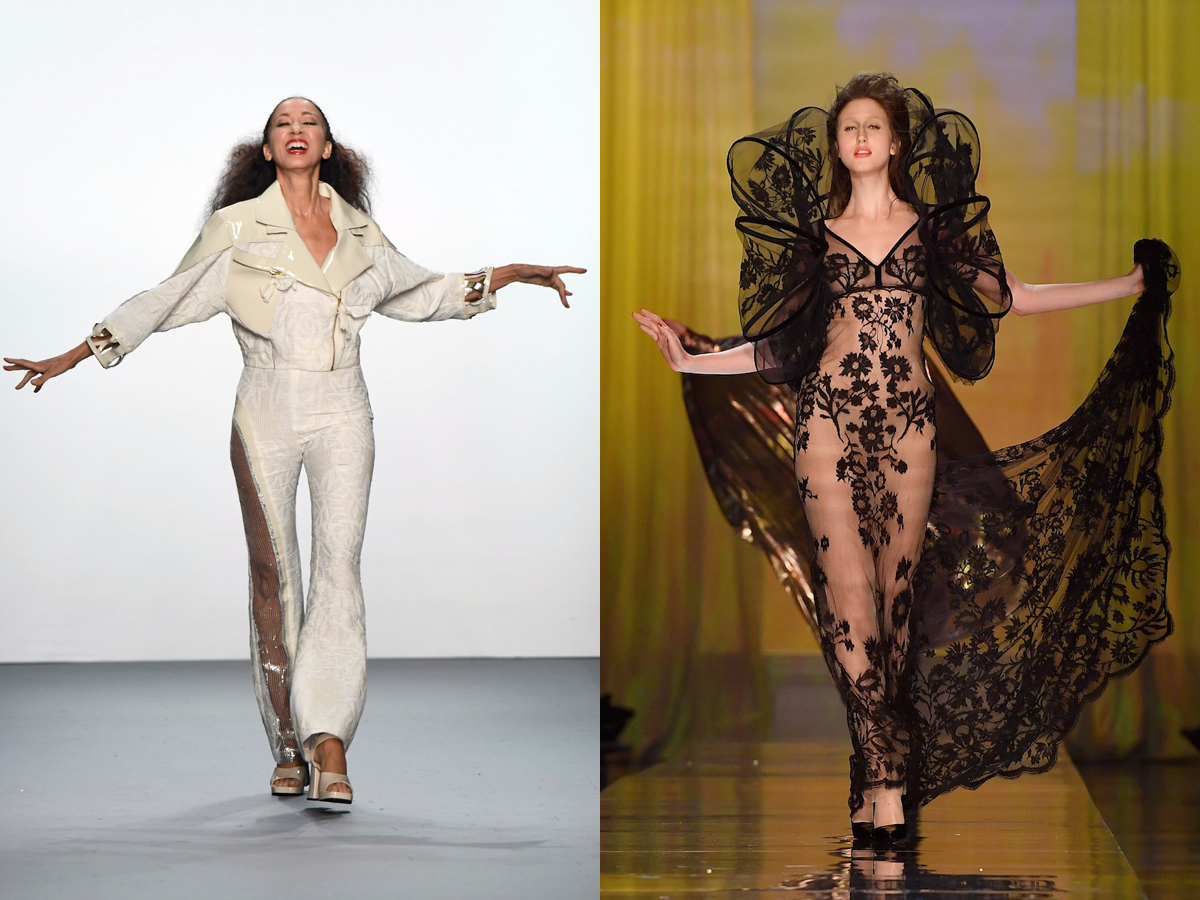 Pat Cleveland grew up in New York, and was scouted by a Vogue editor at 14 years old, according to The New York Times. She signed with Ford Models, and later Wilhelmina before launching a wildly successful career as a ’70s fashion star in Europe and the US. Cleveland was a runway regular for brands like Valentino and Yves Saint Laurent, and was well-acquainted with Karl Lagerfeld, Andy Warhol, and Mick Jagger.

Her daughter with husband and photographer Paul Van Ravenstein, Anna Cleveland, has also taken the fashion world by storm. The in-demand model signed with Next Management in 2015 and has since dominated the catwalk for brands like Chanel, Jean-Paul Gaultier, and Marc Jacobs, while also scoring major editorial spreads, magazine covers, and campaigns. 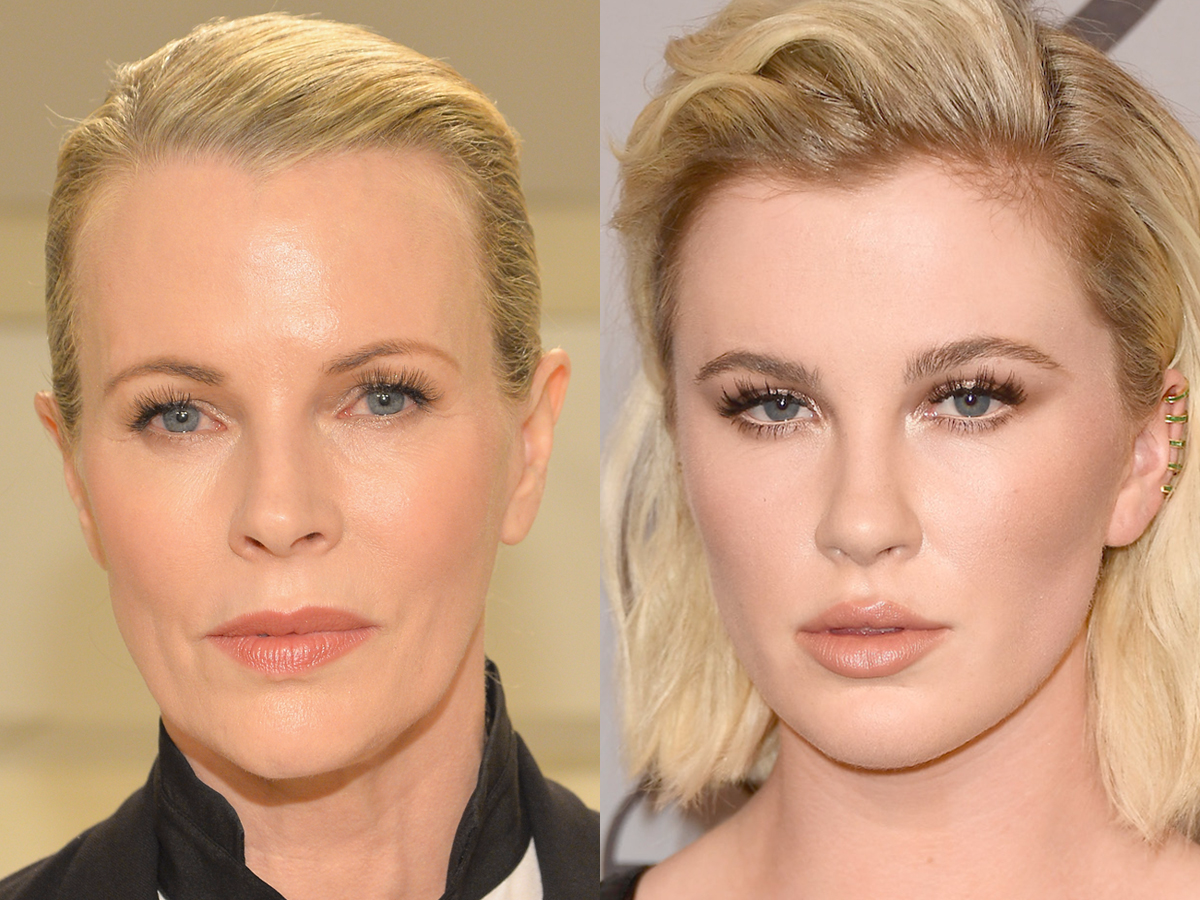 Before she became a Hollywood star, Kim Basinger had a contract with Ford Models when she was 16. Her daughter Ireland Basinger-Baldwin, who she had with ex-husband Alec Baldwin, is currently signed with DT Model Management. She has appeared on the cover of Marie Claire Mexico, Elle Bulgaria, and became a Guess girl after leading the brand’s Fall 2017 campaign. 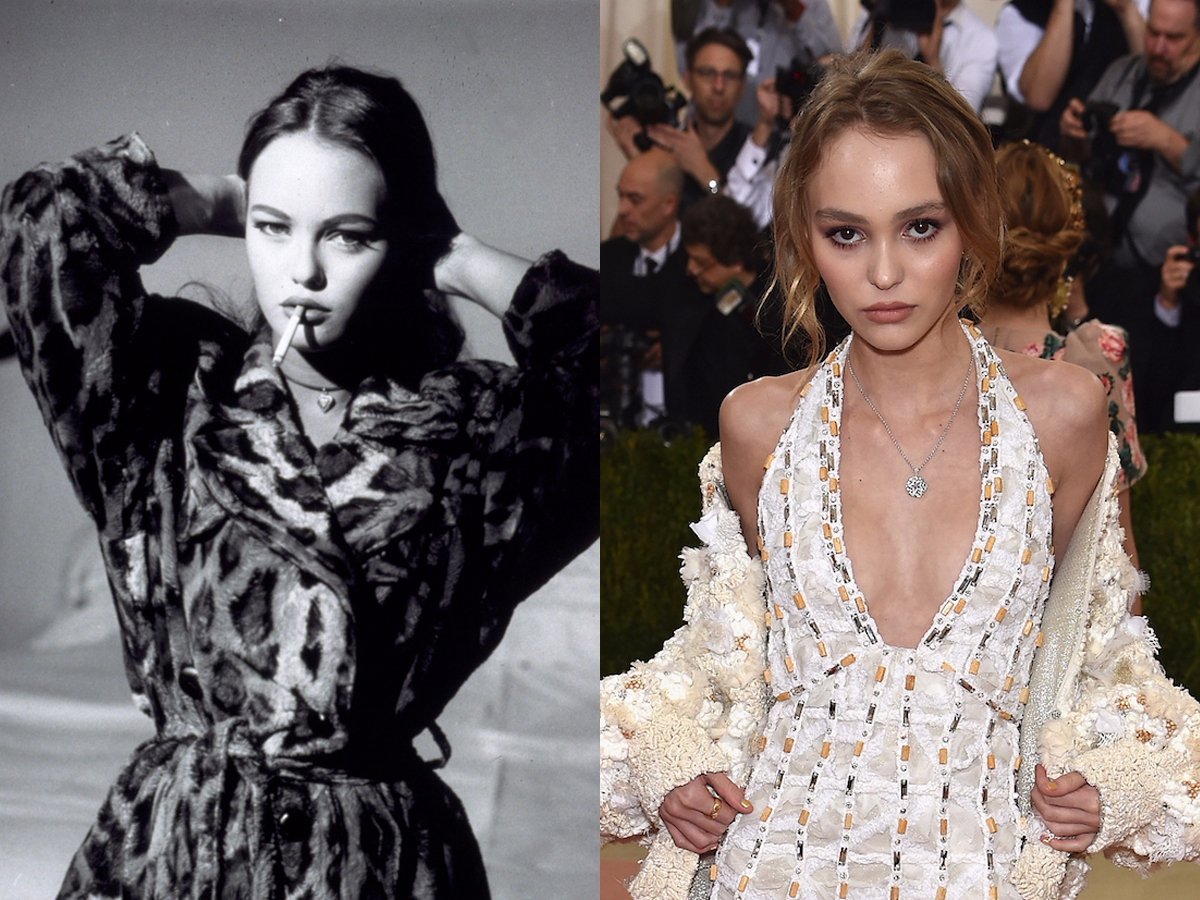 Vanessa Paradis was a musician and a film star before delving into fashion. In 1991, she appeared on the cover of Vogue Paris, and, according to the publication, became a Chanel ambassador that year. She has been the face of numerous campaigns since.

Her daughter with Johnny Depp, Lily-Rose Depp, has followed a similar path in the fashion industry. She made her runway debut with Chanel and has fronted campaigns like Chanel No.5 L’Eau. The 20-year-old has also started to make a name for herself in the acting world, starring alongside Timothée Chalamet in Netflix’s “The King.”

Jennifer Flavin and her daughter Sistine Stallone are elegant and confident. 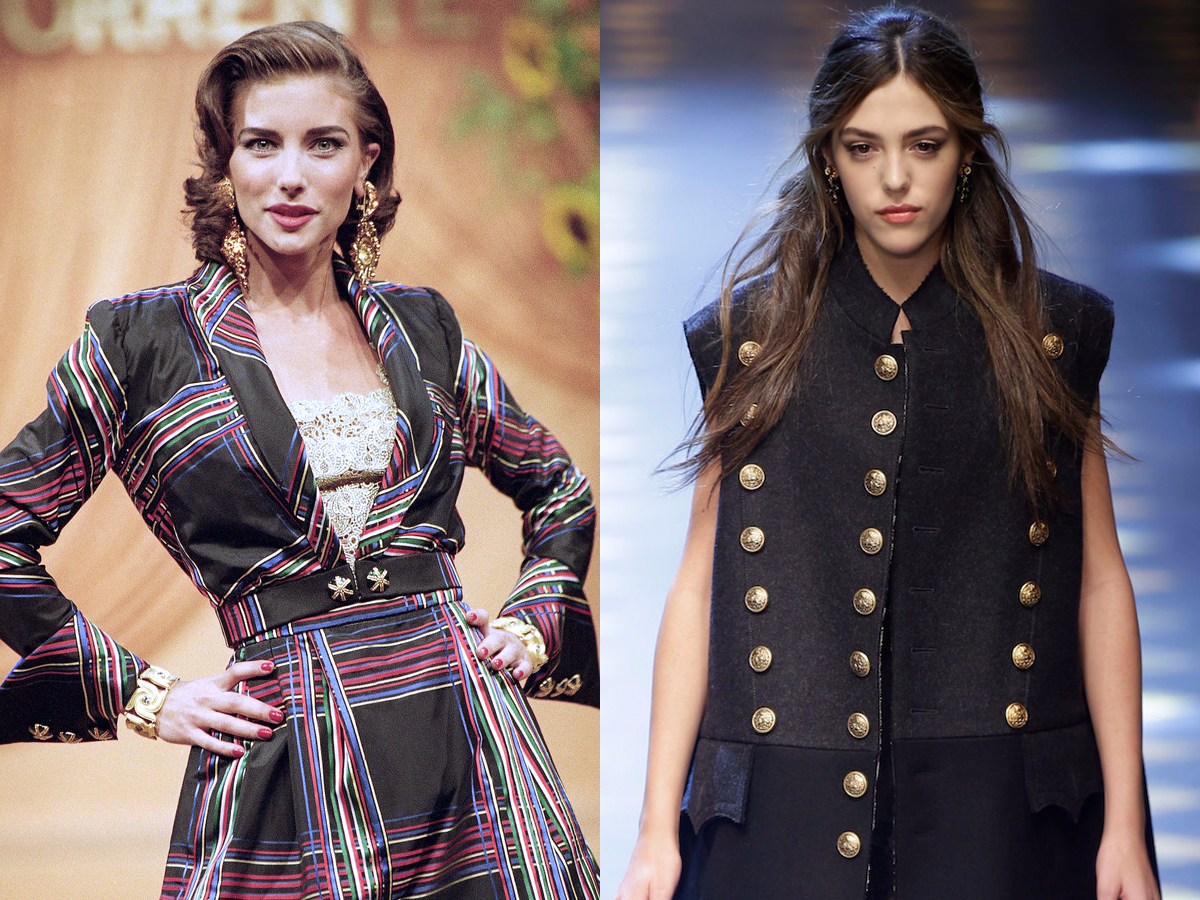 When Jennifer Flavin met Sylvester Stallone, she was a young model signed to Elite Modelling Agency, according to Bustle. Of Flavin’s three children, Sistine Stallone has chosen to pursue modelling. She signed with IMG Models in 2016 and has since walked for Chanel and covered Elle Russia.

Pamela Anderson and Dylan Jagger Lee both give off a California-cool vibe. Before Anderson landed her role on “Baywatch,” she became famous for her modelling with Playboy. Her youngest son, Dylan Jagger Lee, followed in her footsteps and signed with Next Management. He was also approached by Creative Director Hedi Slimane to do a Saint Laurent campaign.

Beverly Johnson and Anansa Sims have the same full brows and enviable cheekbones. 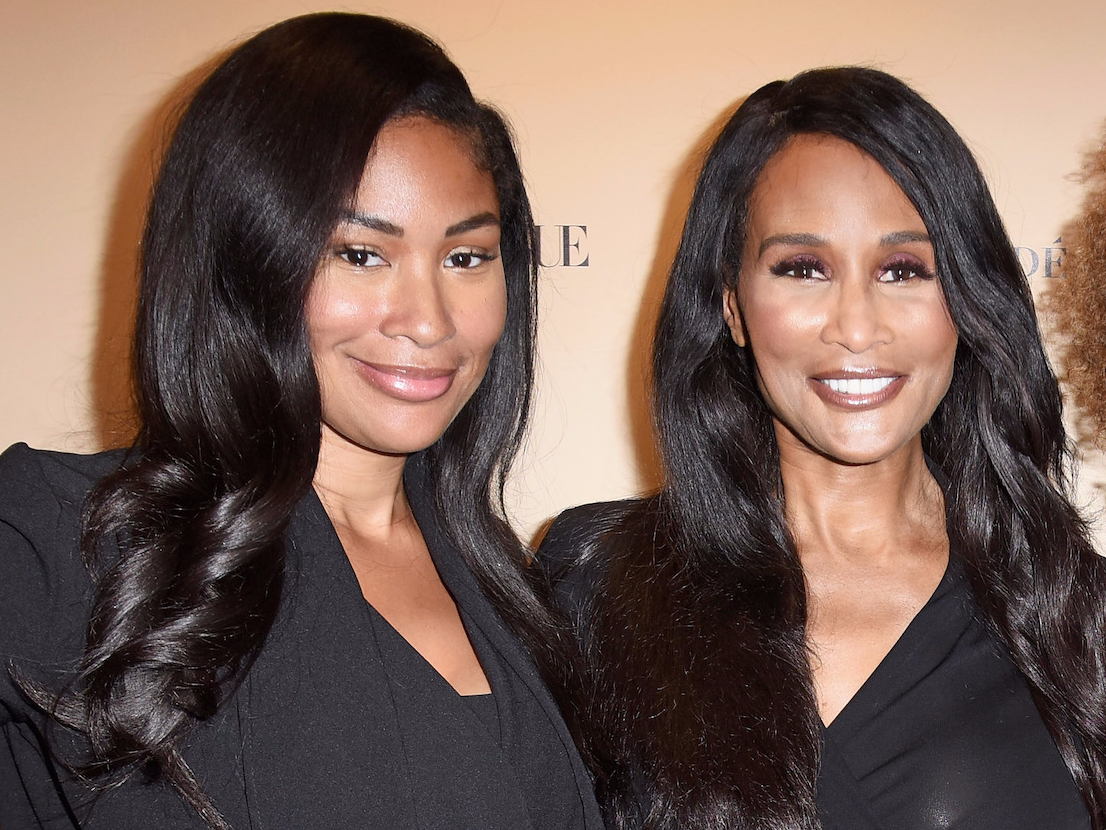 In 1974, Beverly Johnson went down in history as the first woman of colour to grace the cover of Vogue. Vogue reports that Johnson’s first agency was Ford Models, but she was signed to Wilhelmina Models at the time of her groundbreaking magazine cover.

Her daughter Anansa Sims has also taken to modelling. Sims is a Wilhelmina model who landed a Glamour cover with Ashley Graham and five other models.

Georgia May Jagger and Elizabeth Jagger model the striking gaze and distinct cheekbones of their mother, Jerry Hall. 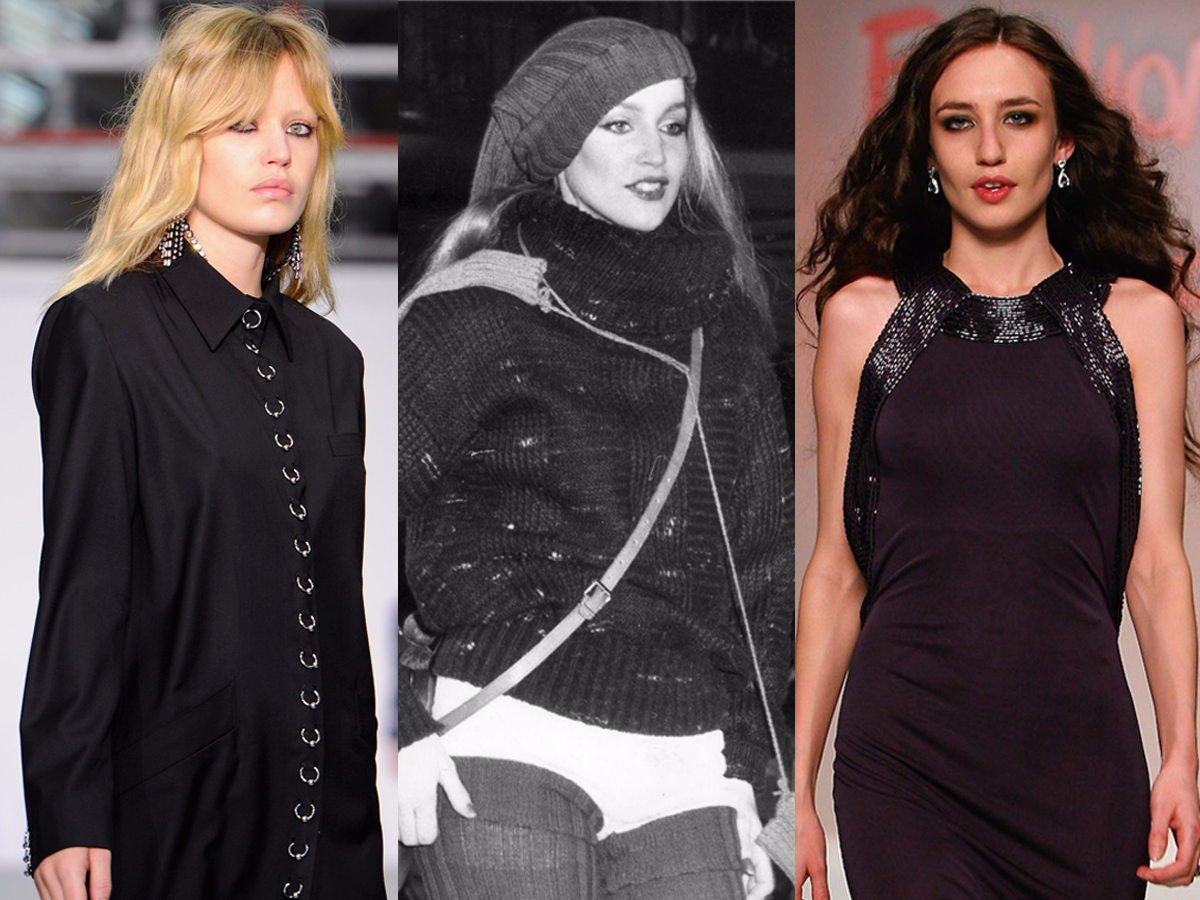 Jerry Hall was first scouted in St. Tropez in 1972. By 1977, she had scored over 40 magazine covers, including Cosmopolitan and Vogue, according to AOL. It was also around this time that Hall met Mick Jagger. The two had four children together but parted ways in 1999.

The oldest Jagger daughter, Elizabeth, has hit the catwalk for brands like Tommy Hilfiger and Sonia Rykiel, but, according to W Magazine, she made her runway debut with her mother when she was only 5 years old.

Her sister, Georgia May Jagger, signed with IMG Models. She has walked for Tommy Hilfiger and Sonia Rykiel, among other major designers, and covered international issues of Harper’s Bazaar and Vogue. 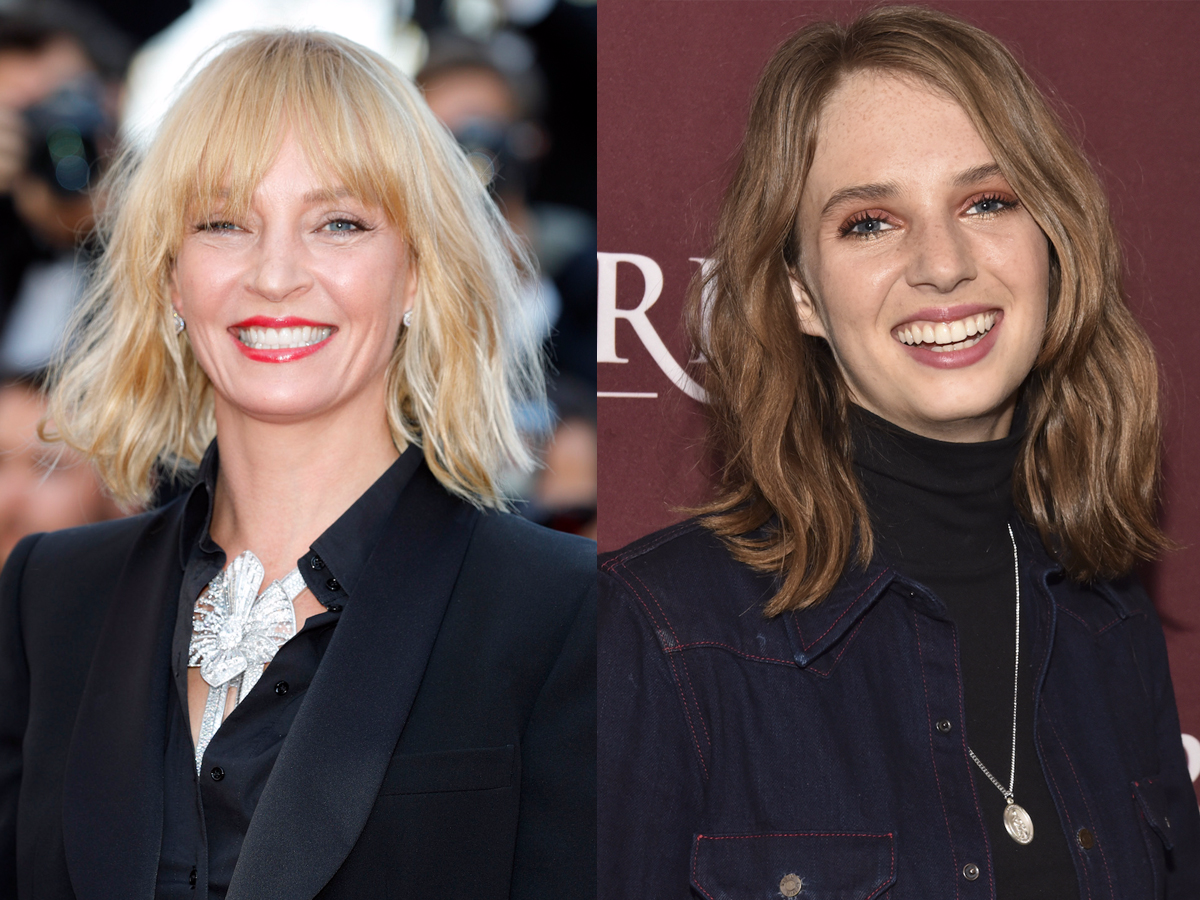 Before Thurman’s acting career kicked off, she modelled for Glamour and British Vogue.

Following in Thurman’s footsteps, her daughter, Maya Hawke, has appeared in a major campaign for Calvin Klein and was the face of All Saints‘ Spring/Summer 2017 collection. She also made her acting debut in 2017, and went on to star in the third season of Netflix’s “Stranger Things.”

Kristen McMenamy and Lily McMenamy have piercing gazes and an intriguing edginess. 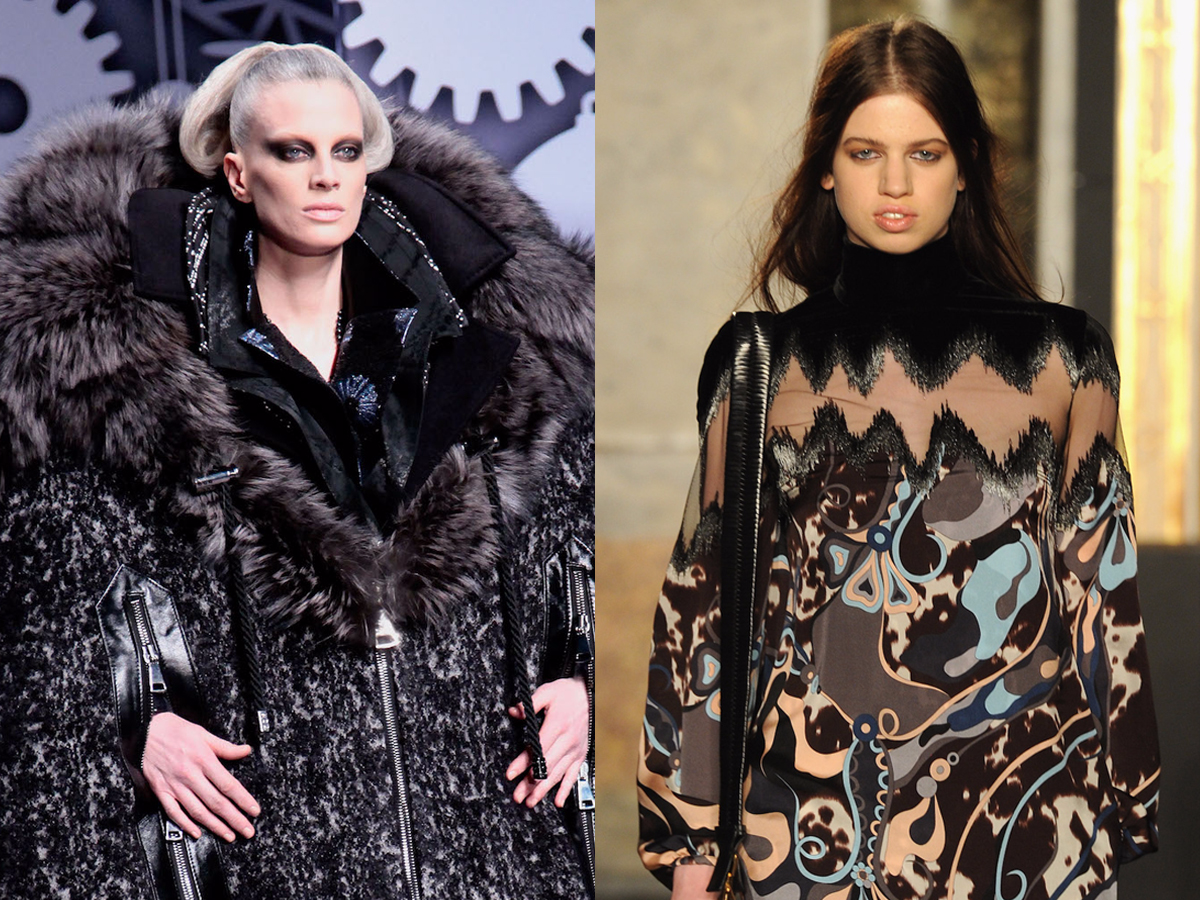 When your mum is Kristen McMenamy – the ‘90s supermodel who was walked down the aisle by Karl Lagerfeld on her wedding day, according to The Cut – the fashion industry is virtually in your genes. Lily McMenamy signed with Next Management and has worked with major brands like Louis Vuitton and Saint Laurent.

Lucie de la Falaise and her daughter Ella Richards have a legacy in fashion and rock ‘n’ roll. 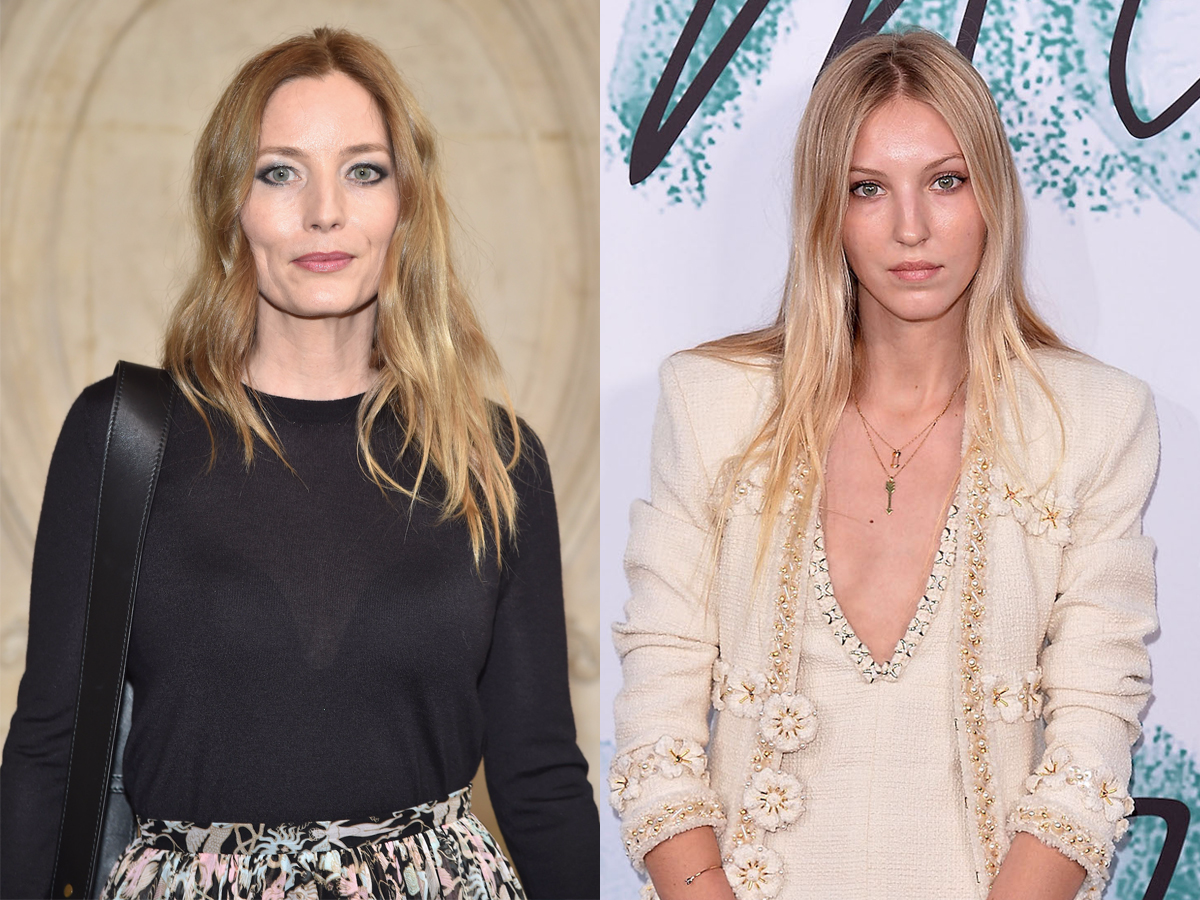 Lucie de la Falaise has deep roots in the fashion world. Her aunt, Loulou de la Falaise, was a legendary muse to Yves Saint Laurent during the 1970s, and Lucie was chosen by the designer as a closing bride for his couture show when she was just 16 years old, as reported by Coveteur. 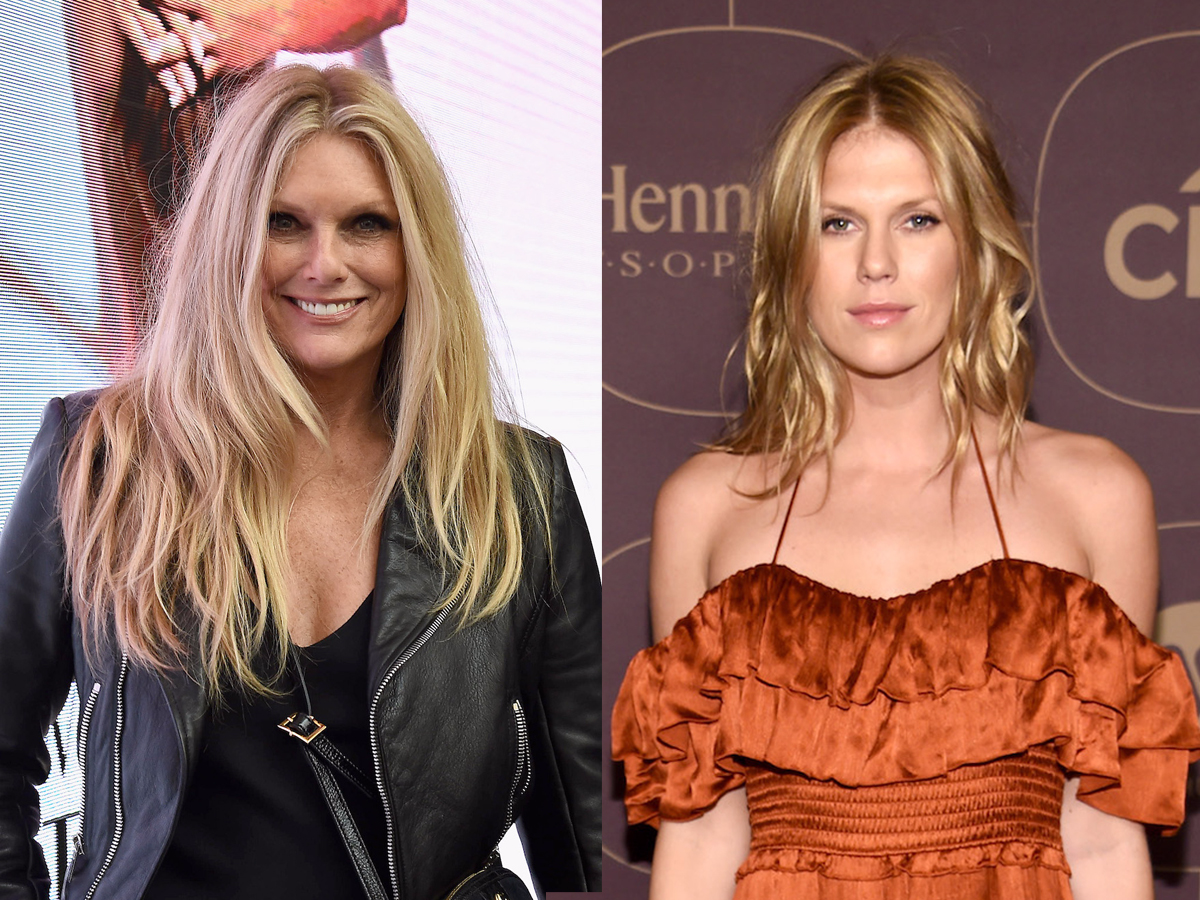 Patti Hansen, married to Rolling Stones guitarist Keith Richards, got her modelling start with Wilhelmina. A Harper’s Bazaar article reports that the rock ‘n’ roll fashionista of the ’70s and ’80s covered Harper’s Bazaar, Vogue, and Esquire, and also had major deals with Revlon and Calvin Klein.

Hansen and Richards have two daughters. The youngest, Alexandra Richards, launched her career with a campaign for Tommy Hilfiger and went on to star in other campaigns for Burberry, Dior, and Abercrombie, according to her website. Richards has walked for Dolce & Gabbana, and posed in the pages of Vogue, Harper’s Bazaar, Vanity Fair, and Cosmopolitan.

Supermodel Rachel Hunter and her daughter, Renee Stewart, have a beautiful glow. 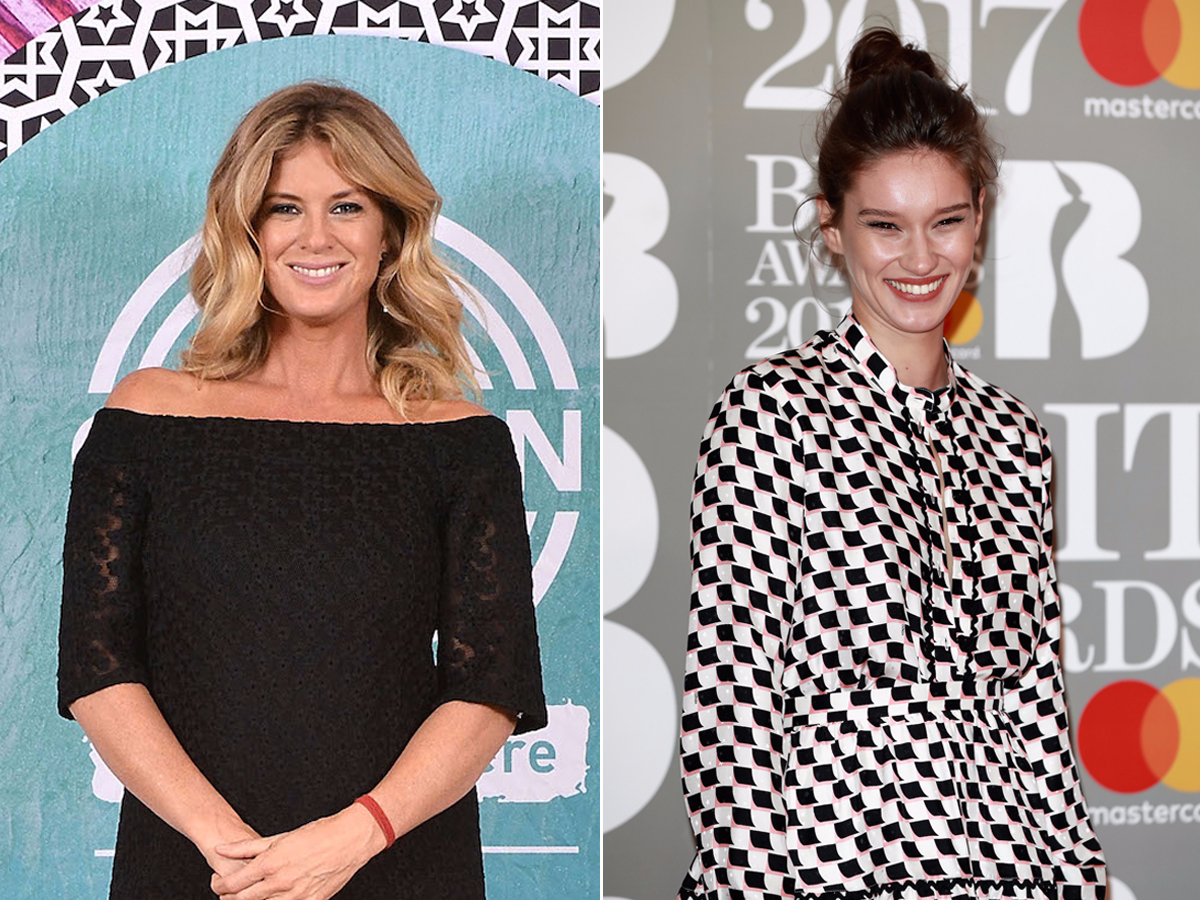 Rachel Hunter was discovered at 17 years old and signed with Ford Models NYC. Her career can be visually traced by her many magazine covers for publications including Italian Vogue, Harper’s Bazaar, Elle, and Sports Illustrated, according to her website.

Renee Stewart, daughter to the New Zealand-raised supermodel and Rod Stewart, is primarily a dancer but has also dipped her toes into the fashion world. She starred in the 2017 James Perse Resort campaign and walked for Dolce and Gabbana in the Fall 2017 runway show at Milan Fashion Week.