Mobile Marketing Too Large For Brands To Ignore

In all honesty when I wrote the title for this article I had to catch myself for I could not believe that such a title would still be necessary in this day and age of iPhones, Androids and the ever-growing prevalent use thereof. But, truth be told, my title is a paraphrase of something Mark Donovan, comScore SVP of mobile, said in regards to the findings of a recent study as part of its Mobile Metrix 2.0 service.

According to the press release announcing the findings, the study revealed “4 in every 5 smartphone users – 85.9 million in total – accessed retail content on their device in July” alone. Leading the way were Amazon Sites which came in as the top retailer with an audience of 49.6 million visitors. And far as bricks and mortars go, Wal-Mart, Target and Best Buy were the top 3 in terms of smartphone visitors. 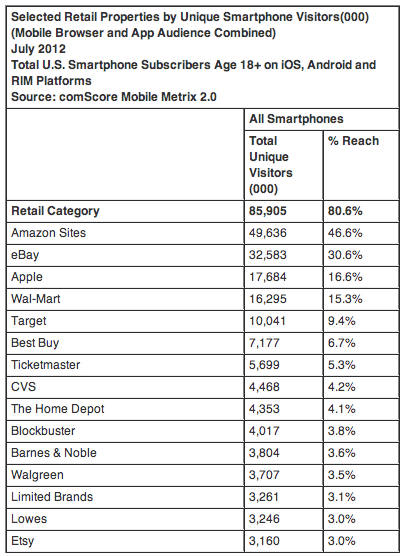 But what caught my eye was the quote from Donovan which inspire my title:

“With nearly 86 million Americans now shopping on their smartphones, this pronounced shift in consumer behaviour is simply too large for retailers to ignore, with the future of their business depending on how well they adapt to the new environment.”

OK, so perhaps I took some liberties with what he said exactly but, any way you want to look at it, it is a very powerful statement and one that I believe applies to ALL brands. Especially when you look at some other stats. These (below) come from a post entitled Marketers And Advertisers, Are You Mobile?

Keep in mind when looking at these stats they are from an article written in September, 2001.

No, that last bullet is not a typo. And you can decide which side of that argument you fall into in the privacy of your own home thank you very much.

And this is not a typo, either: Among all interactive marketing platforms, mobile marketing is expected to grow 38% over the next five years with an estimated $8.2 billion being allocated to it by the year 2016.

It would appear, however, that despite its projected growth, marketers are going to have a hard time getting their act together when it comes to mobile marketing but those who do, will have a leg up on their competition according to Donovan: “But adapting isn’t always easy, especially when considering the complexity of the mobile environment, which requires optimising the experience across multiple platforms and for both mobile websites and apps. The retailers who best understand how consumers are engaging in mobile shopping behaviours and design their strategies accordingly will be best positioned to capitalise on these shifting market dynamics.”

Clearly, the operative word in what Donovan said is “shift.” It is most assuredly a “pronounced shift” among consumers who are flocking, literally, to their smartphones to research products, read reviews and or simply view a brand’s website. And make no mistake about it, all of these actions are ultimately affecting a consumer’s purchase decision.

So, was my title unnecessary?

Are you a brand manager or brand marketer who’s on top of their mobile game and don’t need reminding of the importance of mobile marketing and mobile advertising?

Or are you a brand manager or brand marketer who’s entrusted with a brand who has no mobile presence or has a mobile site which is either not optimised or not mobile-ready?

Or are you somewhere in between?

To paraphrase one more time if I may, “shift happens.”

And the mobile shift is happening right before our very eyes.

Named one of the Top 100 Influencers In Social Media (#41) by Social Technology Review and a Top 50 Social Media Blogger by Kred, Steve Olenski is a freelance copywriter/blogger looking for full-time work. He has worked on some of the biggest brands in the world and has more than 20 years experience in advertising and marketing. He lives in Philly and can be reached via email,Twitter, LinkedIn, or his website.