Toys are a fun way to keep pets entertained, but shopping for them isn’t always straightforward.

Insider spoke with veterinarians to identify the biggest mistakes that pet owners make when shopping for their furry friends.

Here’s the best way to shop for pet toys and which types of toys you should always avoid.

Buying a toy that is too hard can negatively impact your pet’s teeth. 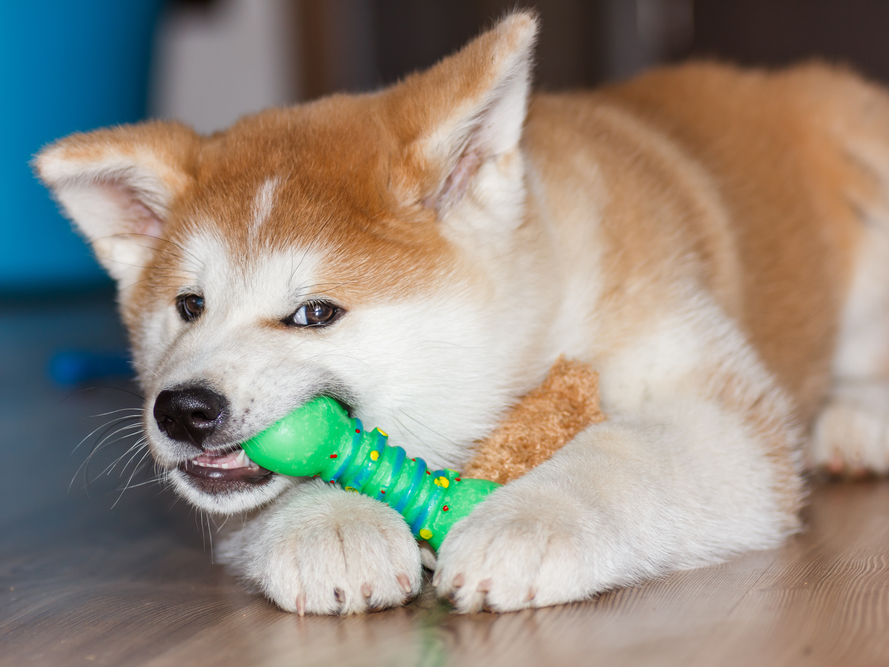 ShutterstockIf you can’t dig your fingernail into a toy and make an indent, it may be too tough for your pet’s teeth.

Mason Romero, veterinarian and advisor at Betterpet, told Insider that one of the biggest mistakes pet owners make is buying toys that are too hard.

“Don’t choose toys that are too hard or ones that are designed to play tug-of-war with. Veterinary dentists do not recommend either of these types because it can cause trauma to the teeth,” said Romero.

According to McLean Animal Hospital, one quick way to test whether a toy is too hard is to press your fingernail into it. If you can’t make an indentation, the toy is likely too hard.

You should never buy toys with rope or strings. 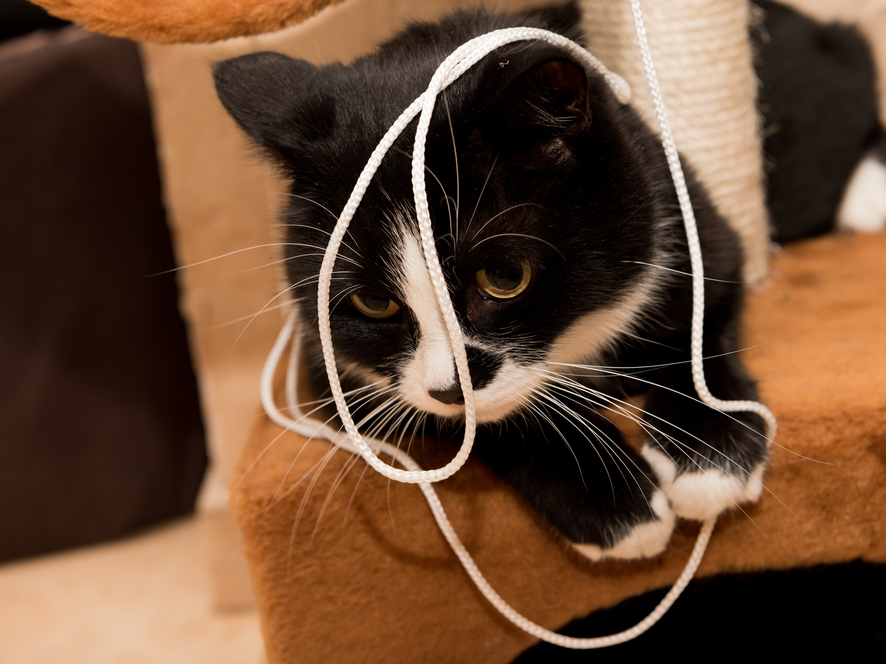 ShutterstockIf your pet ingests string, it could cause a major medical issue.

Rope toys and tasseled toys can be fun, but they can also be dangerous for pets.

“The most important material to avoid when buying pet toys is anything that has strings or rope on it,” said Romero. “If the pet were to swallow the string, they could end up with a linear foreign body [in their intestine], which can be more dangerous than swallowing something like a ball.”

Romero explained that linear foreign bodies can cause severe damage to the small intestine by making it stick together, similar to an accordion.

Buying a destructive pet a stuffed toy can be risky. 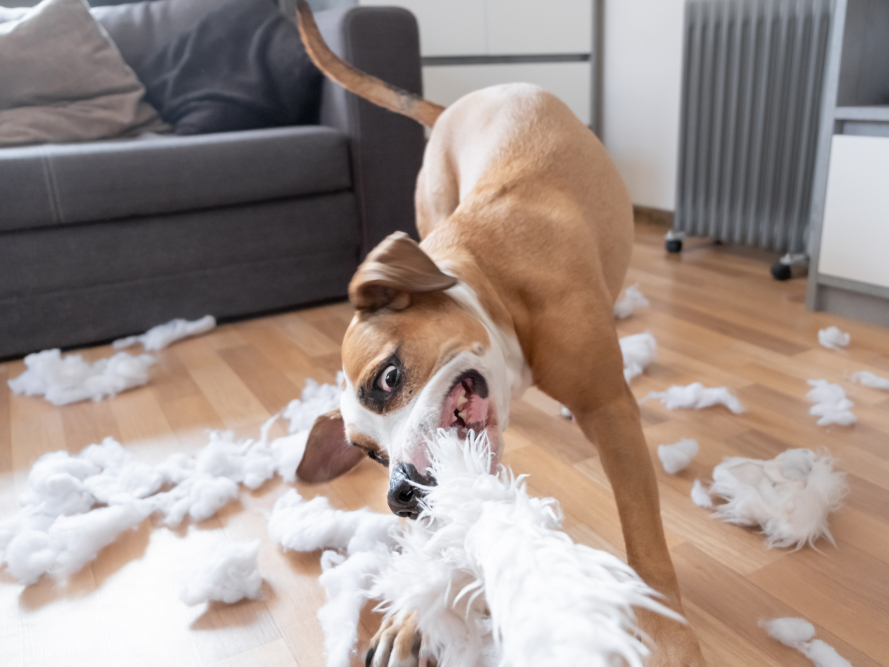 ShutterstockSometimes pets will eat the stuffing from a toy.

It may be cute to watch your pet snuggle with a stuffed toy, but destructive pets should not be given toys with stuffing.

“The biggest danger is that a pet will eat the stuffing out of the toy or the squeaker from the inside. I have seen this cause an obstruction numerous times,” said Romero.

However, Romero added that stuffed toys are generally safe for pets who aren’t prone to chewing or tearing apart toys.

Buying the same type of toy over and over again is a mistake. 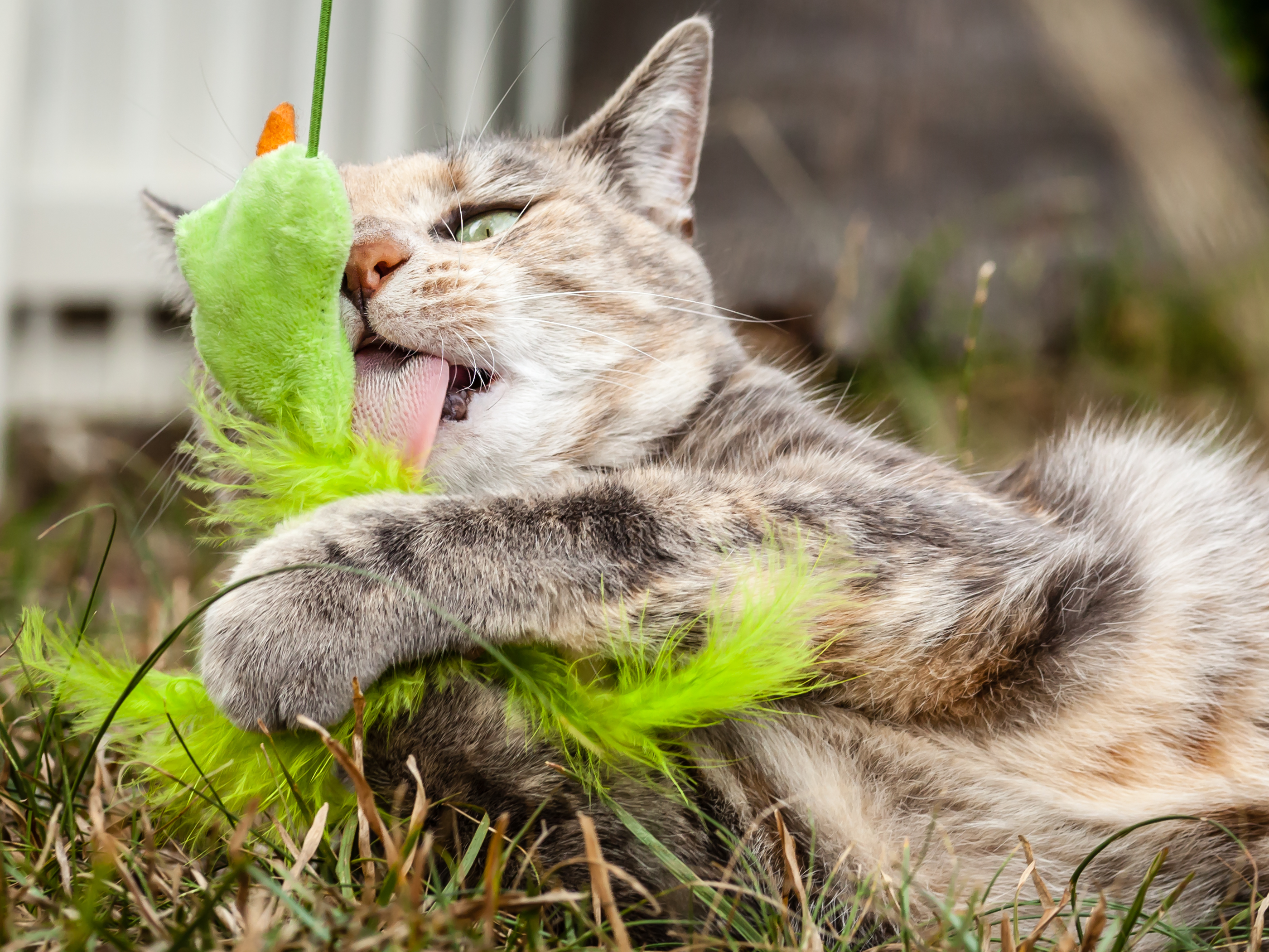 ShutterstockPets can get bored of having the same toys.

“Dogs and cats like to have variety with their toys. By providing an ample number of different types of toys, you’ll help ensure that your pet doesn’t become bored with a single toy,” said Ahn.

If you’re stuck for inspiration, consult with your veterinarian to learn about different types of interactive toy options that they might recommend for your canine friend.

Rawhide can damage your pet’s teeth and digestive system. 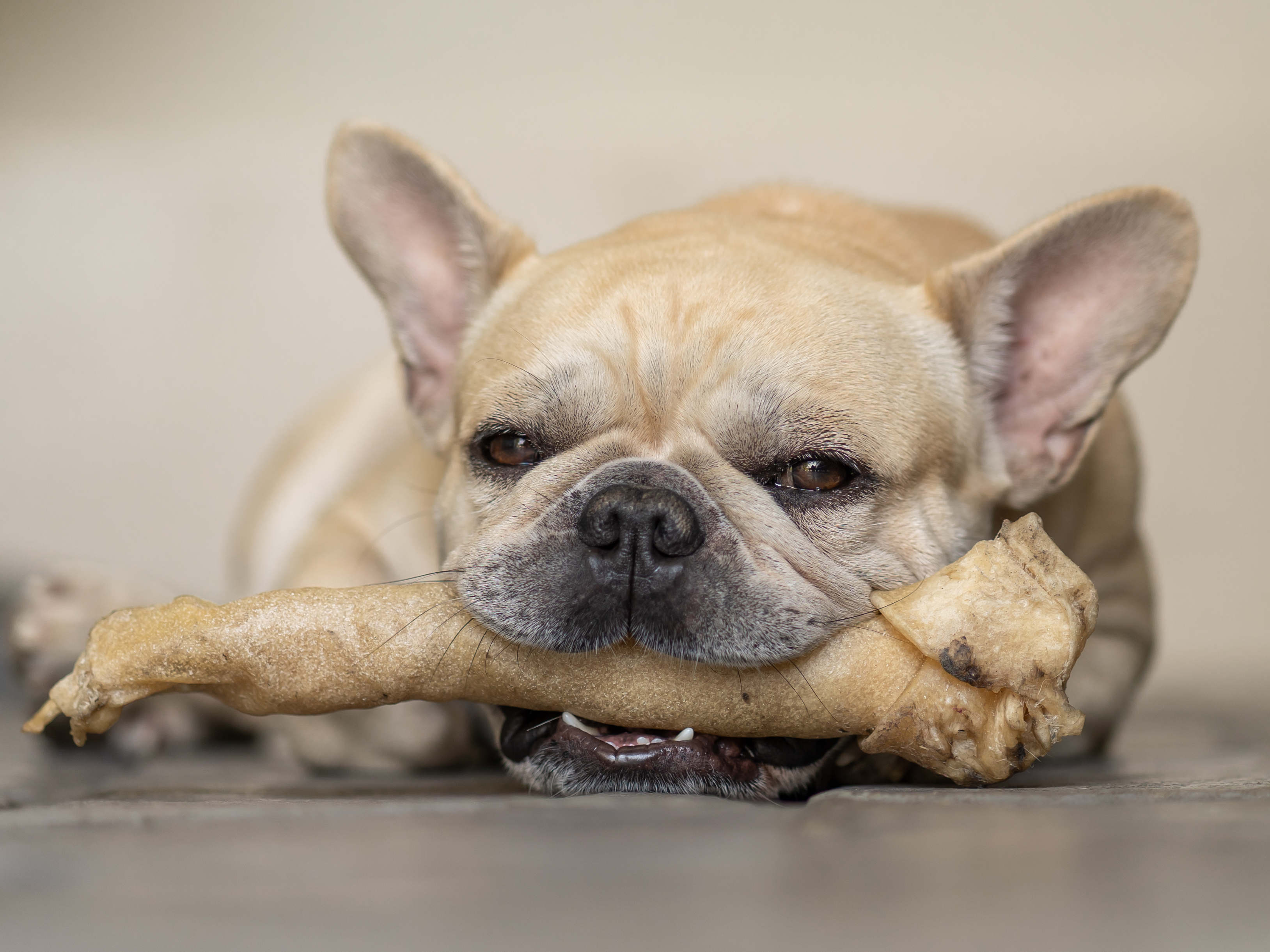 ShutterstockRawhide can damage your pet’s teeth.

Many pet owners buy rawhide as a natural alternative to synthetic toys, but these pieces of untanned animal skin are actually a dental hazard.

“I am not a fan of rawhides nor have I spoken to a veterinary dentist that recommends them. They are too hard and can cause severe damage to the teeth, such as fractures or damage to the inside of the tooth,” said Romero.

Romero explained that internal tooth damage can be identified by looking for purple discoloration of the tooth.

Ahn added that rawhide can also cause gastrointestinal damage if swallowed.

“The pieces of rawhide can become quite small and may be easily swallowed, leading to potential problems like vomiting and diarrhoea,” said Ahn.

Buying a toy that has small parts can be dangerous. ShutterstockSome toys can have small buttons or bits that are a choking hazard.

People shopping for their pets should always steer clear of toys with small parts that could be swallowed.

“If the toy has small parts, a pet might be able to pry these off with their teeth. Depending upon the size of the piece, a trip to the veterinary emergency hospital may be necessary,” said Ahn.

Small parts include things like buttons, plastic eyes, beads, and squeakers that can be easily torn from the toy.

You should always contact your vet if you suspect your pet has swallowed a piece of a toy, particularly if vomiting or other gastrointestinal symptoms develop.

Buying children’s toys for your pet is not safe. iStockSome toys aren’t meant for animals to chew on.

It may be tempting to buy a children’s teething toy or stuffed animal for your new puppy, but pet owners should never give an animal a toy that’s built for a human.

“Toys that are not specifically meant for pets are not built to withstand pet teeth, making them easier to rip apart,” said Jennifer Freeman, resident veterinarian for PetSmart.

Animals often have a hard time distinguishing between pet toys and children’s toys, so toys meant for kids should be consistently picked up and kept away from pets.

Buying yarn or string for cats can lead to health problems. ShutterstockIf your cat eats yarn, it could cause serious medical issues.

A ball of yarn isn’t the cheap, harmless cat toy that many pet owners may believe it to be.

“Contrary to popular belief, yarn should never be given to a cat as a toy. Yarn or string might be accidentally swallowed and could lead to an emergency visit to the vet,” said Freeman.

Don’t buy the wrong size toy for your pet. ShutterstockIf your pet can’t carry their toy, they won’t want to play with it.

Pet toys are not one-size-fits-all. It’s important to choose a toy that’s appropriately scaled to the size of your pet.

“A toy that is too large can limit the pet’s ability to comfortably carry around, decreasing the likelihood that the pet will play with it and enjoy it,” said Freeman.

And, if you have a larger pet, selecting toys that are big enough is a health priority.

“For larger pets, a toy that is too small may present a choking hazard or become ingested and get stuck in the gastrointestinal tract,” said Freeman.

Don’t wait until a puppy or kitten is grown to buy them toys. 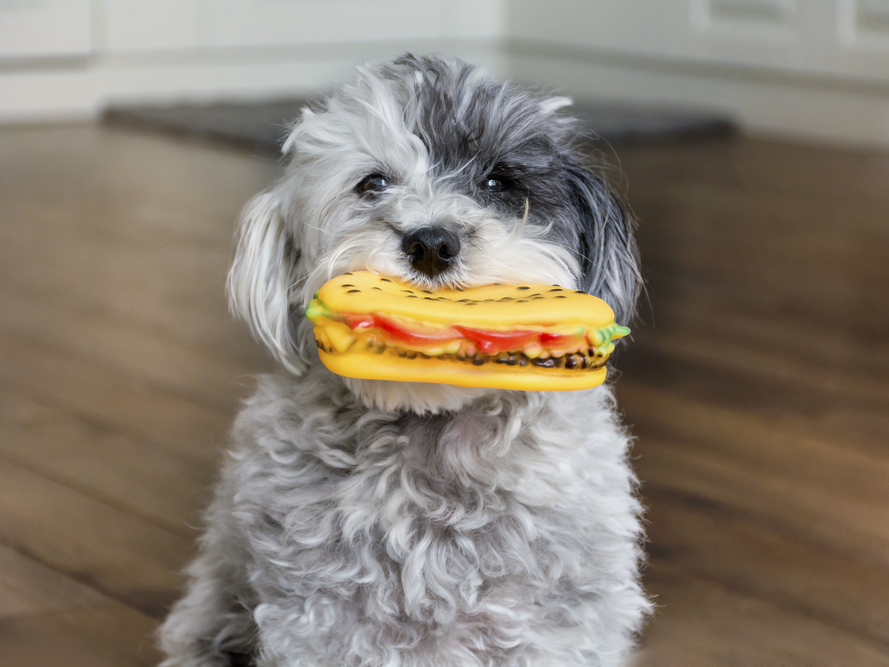 ShutterstockPets of all ages need playtime.

Though puppies and kittens may outgrow their early toys, it’s important to supply them with their own play items or risk having them damage your belongings.

“It is critically important to introduce toys to young pets early so that they become accustomed to chewing or scratching toys rather than the wooden leg of an expensive dining room table or living room couch,” said Ahn.

Many pet stores offer a range of toys that are especially suited for growing cats and dogs. Check toy labels for age range recommendations.

You shouldn’t neglect to give your pet puzzle toys. 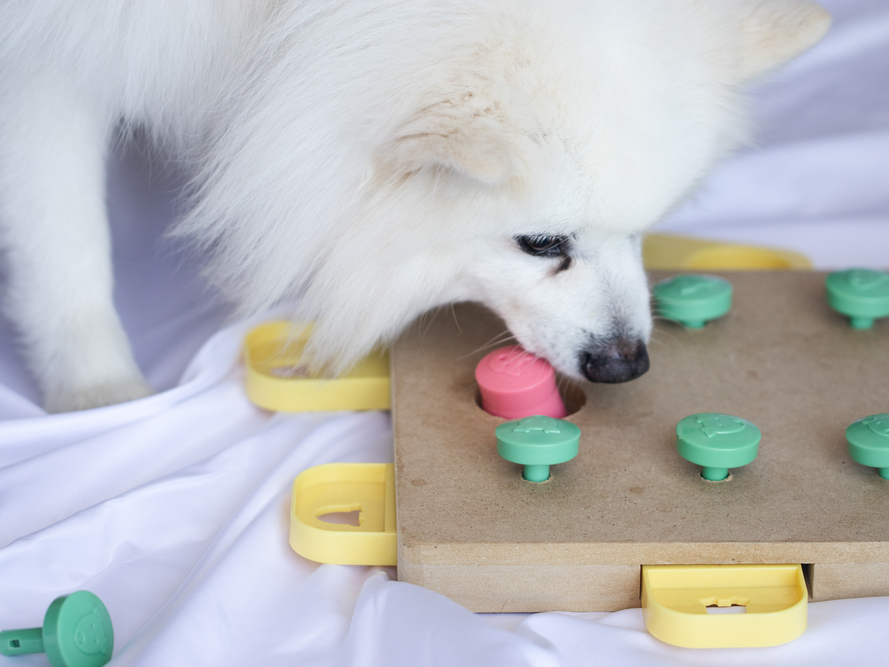 ShutterstockPuzzle toys can help a pet exercise their mind.

If you have an active pet who loves to run around or one who gnaws on everything in sight, it makes sense to provide them with ample throwing and chewing toys.

However, Freeman told Insider that all pets should also have puzzle toys or ones that provide mental stimulation.

“One mistake both dog and cat parents make is giving their pets toys that don’t adequately motivate or stimulate them,” said Freeman. “Without interactive toys, pets often lack mental stimulation and can become stressed, anxious, and bored.”

Not replacing toys regularly is also a common mistake. ShutterstockIf a toy has some pieces loose, you’ll want to toss it.

Pet parents should be vigilant and frequently monitor their pets’ toys for excessive wear or breakage, which could be dangerous.

“Toys have a finite lifespan,” said Ahn. “If the toy that you purchased is getting worn, developing jagged edges, or is in danger of having major pieces loosening and becoming potential choking or swallowing hazards, it is important to promptly replace it with a new one.”

If you can easily loosen the plastic, rubber, or stuffing of a toy with your fingers, it’s likely time to toss the item.

8 ways to get your pets to drink more water

6 weird things your cat does, explained by experts