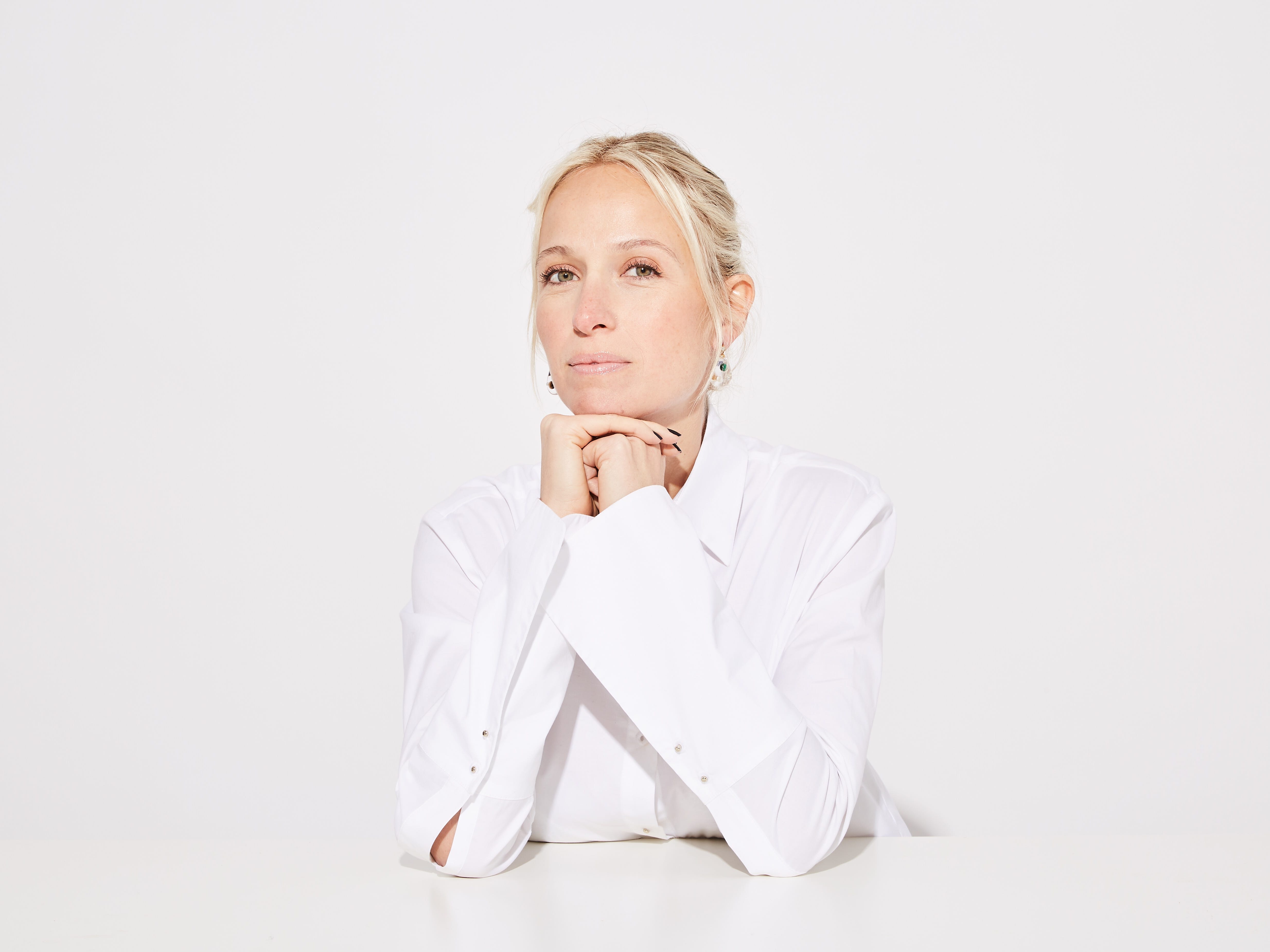 Way back in 2011, Misha Nonoo was having brunch with some friends in Manhattan. She was around 25 at the time, sporting a jacket that she herself had designed.

By chance, a buyer for the brand Intermix was sitting one table over. “She said, ‘I love the jacket you’re wearing, where is it from?’ And I said, ‘Oh, I made it,” Nonoo recalled to Insider.

Next thing she knew, Nonoo found herself in the buyer’s office, showing off eight original designs. “I walked out with a purchase order for six of the eight pieces,” Nonoo said. It was worth $US150,000.

A few months later, Nonoo officially launched her eponymous clothing line, and within two years, she became a finalist for the prestigious CFDA/Vogue Fashion Fund. In 2015, she was named one of Forbes’ 30 Under 30. That same year, she became the first designer to host a fashion show on Instagram. The next year, Snapchat.


Read more:
Inside the world of ‘Bling Empire’s’ Jaime Xie, the tech heiress forging her own path as a fashion influencer

Nonoo, now 35, told Insider she can’t exactly remember her first celebrity client but said her first clients were her friends and family whose support helped build the business â€” it’s just that Markle and Princess Beatrice happen to be in her friendship circle. Another friend, Facebook COO Sheryl Sandberg, was a key player in her groundbreaking Instagram fashion show. (Nonoo is married to oil heir Michael Hess.)

Today, the brand counts celebrities such as Bella Hadid, Cate Blanchett, Meghan Markle, and Amal Clooney as fans. In 2019, she teamed up with Markle, then a working royal, on a clothing line for the women’s charity Smart Works. The sleek designs and sustainable ethos of Nonoo’s brands are some of the reasons it’s won such highly placed fans.

“I have always been a huge fan of Misha â€” personally and professionally,” stylist Sarah Slutsky told Insider. “I love the way she prioritises uniform dressing. I think a formula for what to add to your closet is empowering and helpful for many women. I believe when you can build a wardrobe with pieces that are interchangeable, the options for feeling put together are endless and the result is confidence.”

Nonoo’s latest collection, entitled “The Perfect 10,” includes white collared shirts, cosy turtlenecks, and sweatpants, intended for the new on-the-go â€” just from the bedroom to the kitchen table for yet another Zoom meeting.

In an interview with Insider, Nonoo talks about her latest fashion collection, getting her start in fashion, and the future of sustainability in the industry.

Growing up, Nonoo always knew she wanted to start her own thing. Born in Bahrain, Nonoo relocated with her family to London at the age of 11.

She attended college between London and Paris, going to both the European Business School and the Ã‰cole SupÃ©rieure du Commerce ExtÃ©rieur, studying international business and French.

At 23, she came to New York to work at a menswear tailoring company, which agreed to sponsor her visa. “I wanted to live in New York,” she said. “This was my way in.”

She has come a long way since that chance encounter in Manhattan. Today, A hallmark of her business model is that she produces everything on-demand, and does not create seasonal collections. The former was inspired by a situation that arose early on in her fashion career.

In the very beginning, she had worked with one retailer that placed an enormous purchase order. She was excited, she recalled.

“Then I quickly realised you only have a 10-week full-price selling period and your gross margin agreement means that every week you’re on sale, [wholesalers are] chipping away at that gross margin,” she said. 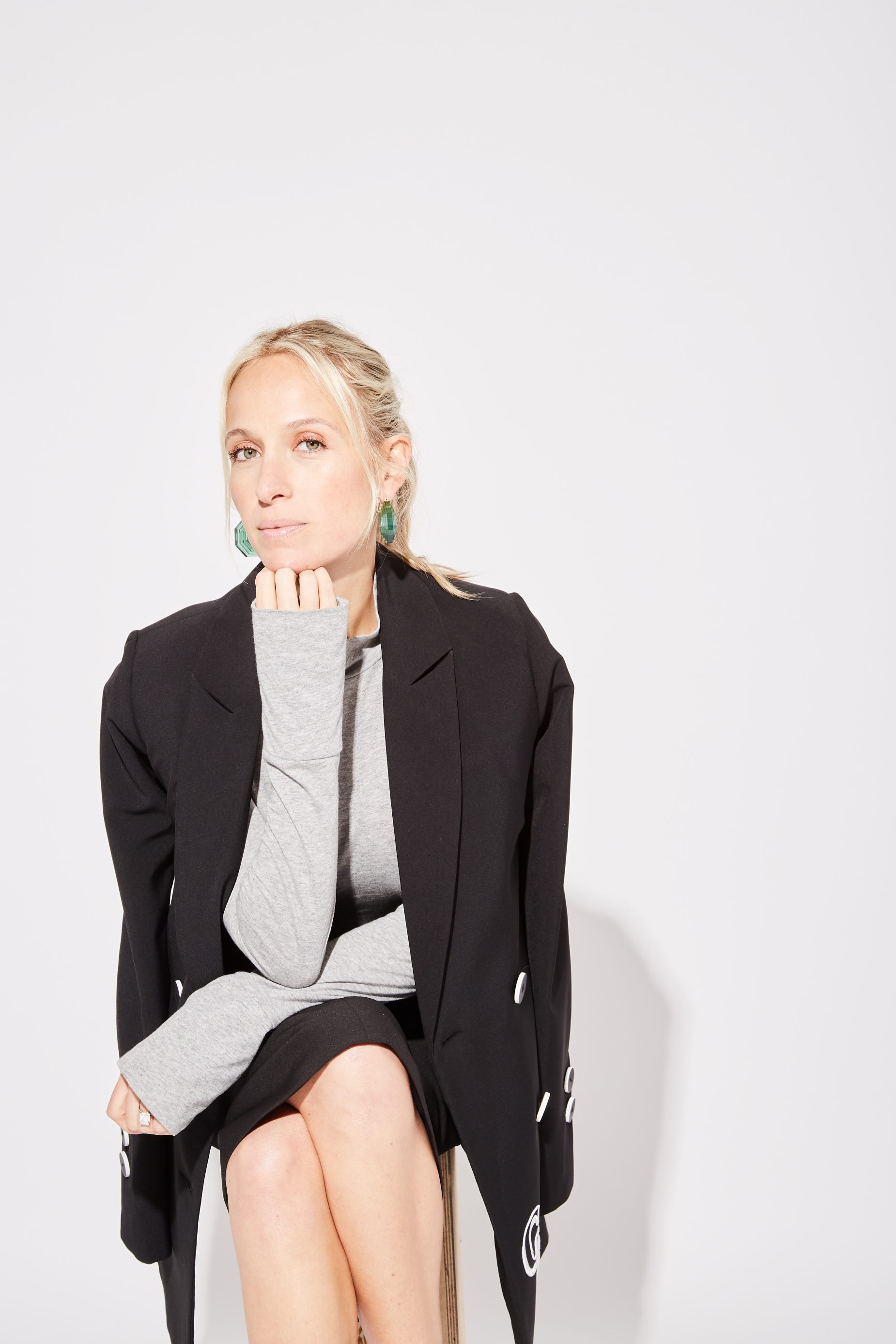 Courtesy of Misha NonooSlutsky told Insider that Nonoo ‘carefully considers what it is to invest in a clothing item in a way that you would have an item designed to last.’

“The agreement is designed so that you’ll never win as a designer,” she continued. “It was always designed in the favour of the major department store.”

The store also decided to return any inventory that was not sold, leaving Nonoo with excess product. “That was a huge learning curve,” she said, adding that all the money that was being wasted could have easily put her out of business.

“Now I look back on that,” she continued. “That was the beginning of me starting to manufacture on-demand and to understand that I wanted to own my relationship with my customer and that I never wanted to be beholden to a major department store.”

That worked out well, as wholesalers were hit hard during the pandemic. Some filed for bankruptcy, while all were severely impacted by the loss in foot traffic as shopping pivoted online.

Meanwhile, because Nonoo now produces everything on demand, as manufacturing in China shut down, she could turn to Peru and Los Angeles for production without losing much money from wasted inventory.

The brand also began honing in on its social media strategy and was able to launch a loyalty program for customers, with the highest tier including a tailoring allowance and a personal stylist. For that, customers have to spend at least $US2,800. 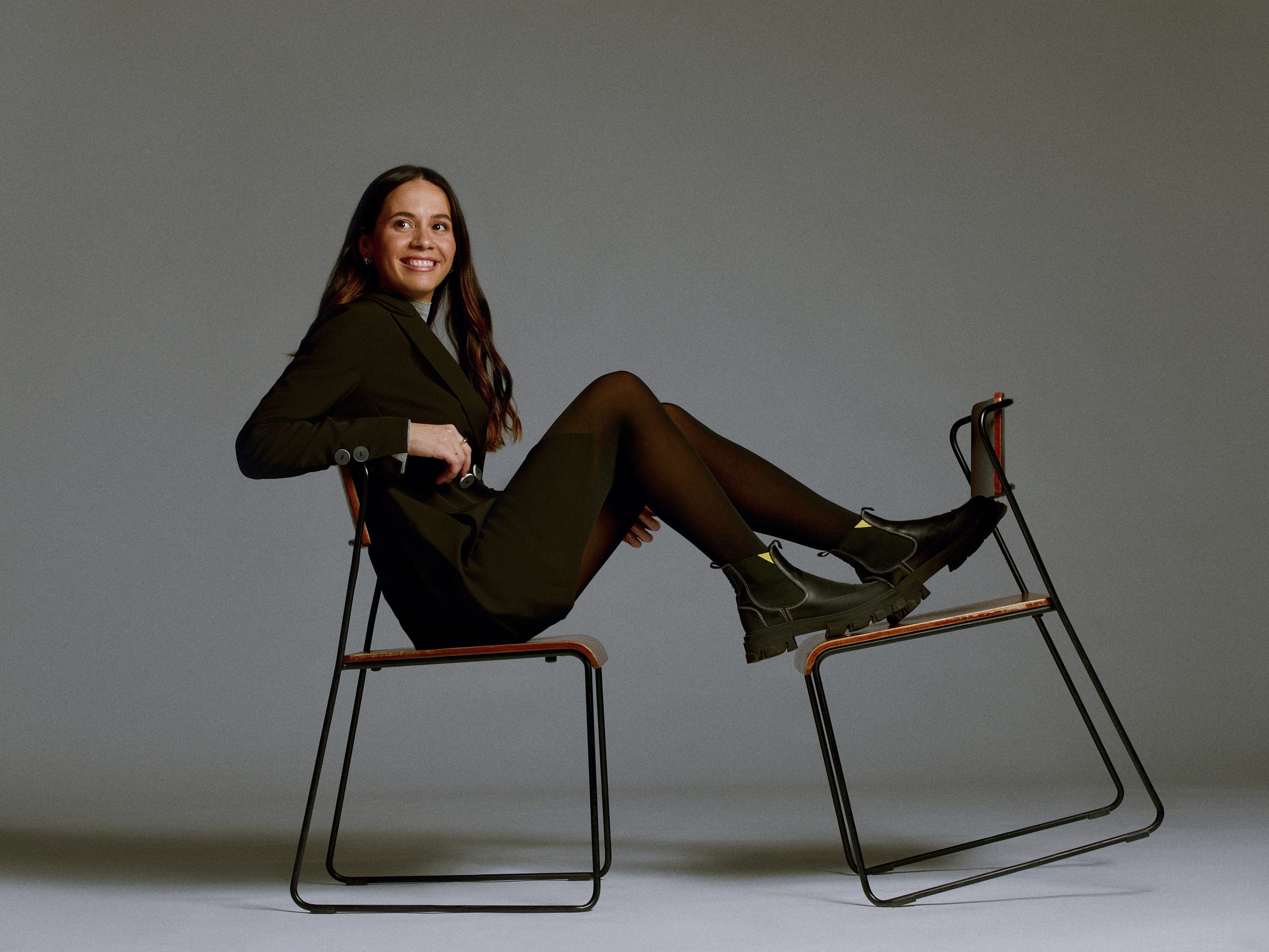 Consumers are educating themselves more on sustainability, Nonoo says

Although the pandemic has accelerated this, Nonoo said she thinks customers have been educating themselves on how to consume less.

For those with the means, it’s about forging fast-fashion and buying pieces of clothes one knows they will reuse over and over again. That’s who Nonoo’s line seeks to service, the customers that want quality staple items that will be reused over and over again.

Even young people â€” many of whom still buy cheap fast fashion â€” have become conscious about how the industry is polluting and damaging the environment, Nonoo said.

“A lot of them use platforms like Threat Up and the Real Real, Poshmark to buy things secondhand,” she continued. “As opposed to buying virgin fashion that comes from a source like one of the major fashion brands.”

Aside from making seasonless products and not keeping an inventory, Nonoo’s brand has also eliminated single-use plastic from its supply chain and has plans to forgo using single-use polyesters.

Another trend that will follow long after the pandemic is seasonless fashion shows, Nonoo said. That’s ironic for Nonoo, as she made headlines years ago for being the first designer to host an Instagram runway show. 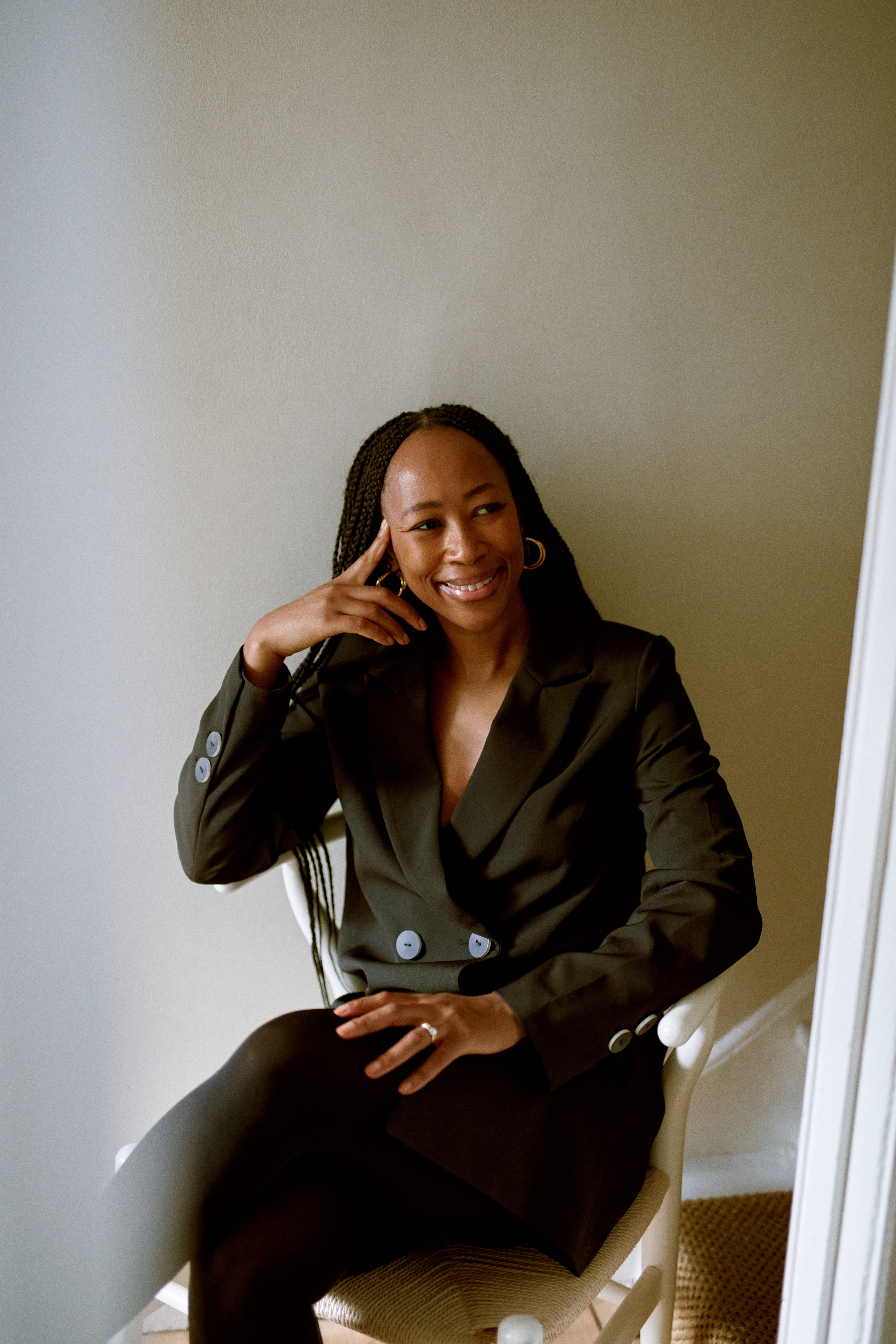 That opportunity came about one night while Nonoo was having dinner at the home of a friend of hers, Facebook’s Sheryl Sandberg.

Nonoo told Sandberg that earlier that day, she had toured Instagram’s headquarters and spoke to someone who works in the marketing and events department about how the fashion industry was quickly changing.

She relayed the conversation to Sandberg, who agreed that the industry was undergoing a shakeup. The idea of a virtual fashion show emerged.

“She said, ‘Well, Instagram can’t officially partner with anyone,'” Nonoo said. “But she was really incredibly helpful and walked me through what the parameters were and the lines we could cross.”

There were strict guidelines for the show, which, Nonoo said, helped her and her team be even more creative. But that didn’t make the task any easier. It was hard because an Instagram fashion show “hadn’t been done before.”

But now, Nonoo is leading the way to another runway disruption â€” hardly doing them at all.

“It’s about consuming things when you need them, that fit into your life, and that are going to work for you for a long time,” she said.

Nonoo said she thinks the pandemic has disrupted the industry so much, that even when shows fully come back, “I don’t think fashion weeks are going to be the same.”