“Minecraft” has been called ugly. We’d call it minimalist.

Whatever you think about how “Minecraft” looks, it’s hard to argue about this adorable, “Minecraft”-themed Xbox One S console:

Not bad, right? This new Xbox One S isn’t just a pretty face — it’s the perfect package for the “Minecraft” superfan in your life.

Here’s everything that comes in the box:

The console itself is obviously distinct. The 8-bit style is intentionally reminiscent of the block-by-block nature of 'Minecraft.' In 'Minecraft,' you literally build a world block-by-block. It's a game about securing resources -- from dirt to wood to stone to diamond, and much more -- and then using those resources to survive. That means building houses, and weapons, and tools, and creating irrigation systems and the other staples of human life.

Thus, the 'Minecraft' edition of the Xbox One S is a nod to the very nature of the game.

The reference goes far deeper when you flip the console over. This is what's known as a 'Redstone circuit.' It's the electricity system within 'Minecraft,' essentially. The idea with this reference is that this the Redstone circuitry that's powering the Xbox One S. It's a relatively deep cut, and it's one that you'll only ever see when you look at the bottom of the console -- a nice, very fan-servicey reference for folks who know. It's also strong incentive to put the included vertical stand to use (it's normally sold separately, unbelievably).

Beyond the console, the new 'Minecraft' Xbox One S bundle comes with a fantastically creepy gamepad. Do you see it? How could you not see it?

Yes, the gamepad is a face -- and not just any face, but the face of the notorious Creeper. For those unfamiliar, the Creeper is a diabolical enemy in 'Minecraft.' You'll find him lurking in underground caverns, or sneaking up on you when you least expect it. Before you've been exploded by him, you'll hear the quiet hiss of dynamite. And then: Whammo! Creepers explode, of course, thus killing you in one shot. They're real jerks.

Which is why it's hilariously satisfying to use their faces as gamepads! There's even a little TNT box on the back of the gamepad -- an allusion to the inner nature of Creepers.

These gamepads are also being sold separately, of course -- they cost $US74.99 and arrive on September 5.

But maybe that isn't enough 'Minecraft' stuff for you? There's a pretty fantastic, extremely porky gamepad that's also available -- it's sold separately for $74.99. Yes, that is a curly tail on the rear of the gamepad. And yes, that is an amazingly pixelated pig face on the front. It's sold separately, but also it's perfect in every way. Whether you care about 'Minecraft' or not, this gamepad is probably worth your money.

The Xbox One S in the bundle comes with a 1 TB storage drive, a vertical stand, and digital codes for 'Minecraft' and the Redstone expansion. You can pre-order the bundle right here through Microsoft -- it costs $US399.99 and is scheduled to arrive on October 3.

Check out a trailer -- yes, a trailer for a console -- right here: 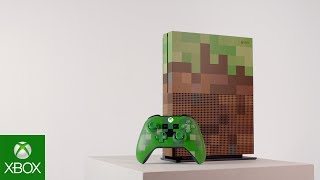