As one of the world’s most popular, most widely played games, “Minecraft” attracts a large swath of players. Many of these folks are just like you and me — casual, into playing fun games, but maybe not ready to dig in and spend, like, years handcrafting a massive world.

And then there’s a small section of that massive playerbase that takes the game’s creation aspect to stunning heights. Such is the case with the “Kingdom of Galekin,” an enormous, incredibly ambitious world that one “Minecraft” player has been building for nearly five years. In both size and detail, the Kingdom of Galekin is insanely impressive. Check it:

Rather than a single impressive building, or a city, or a re-creation of something famous, the Kingdom of Galekin is an entire unique world. And massive structures in each: Some of these images are massively scaled out. Everything you see here is walkable, playable world: You're probably going to want a boat.

The user, who goes by 'Lindard' on the Planet Minecraft fan site, says the Kingdom of Galekin has been in progress for about 4.5 years. Everything you see here was created in the PC version of 'Minecraft,' which enables a lot more freedom in world building. And beautiful shots like this are the result of a powerful PC running 'Minecraft.' Just look at all that detail! It's also how there are such gorgeous sunrays here. Linard/dancsa222
BONUS: In video games, sun rays like this are called 'god rays.'

Massive boats like this, sadly, are not functional. But they are gorgeous! The same goes for the flags here -- they don't flap in the wind. But they do a great job with ambience! Linard/dancsa222
Check out that sky!

The level of detail in the kingdom is stunning, even though it's just as blocky as ever (this is still 'Minecraft'). That detail extends beyond buildings to courtyards and plazas. To say nothing of the massive greenscapes! But don't think this is just about the aristocracy. Farms and windmills dot the countryside. The sheer size of this creation is truly stunning. And all these buildings have interiors, keep in mind! Linard/dancsa222
The fountain in the foreground is a nice touch, no? You probably don't have to worry about creeper attacks too much with these massive castle walls. But enough of these (glorious, beautiful) images! Check out this virtual flythrough from the latest version: 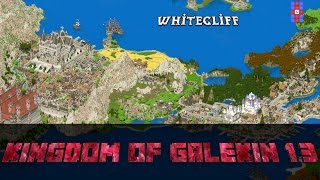 Want to download the Kingdom of Galekin? You totally can, right here.