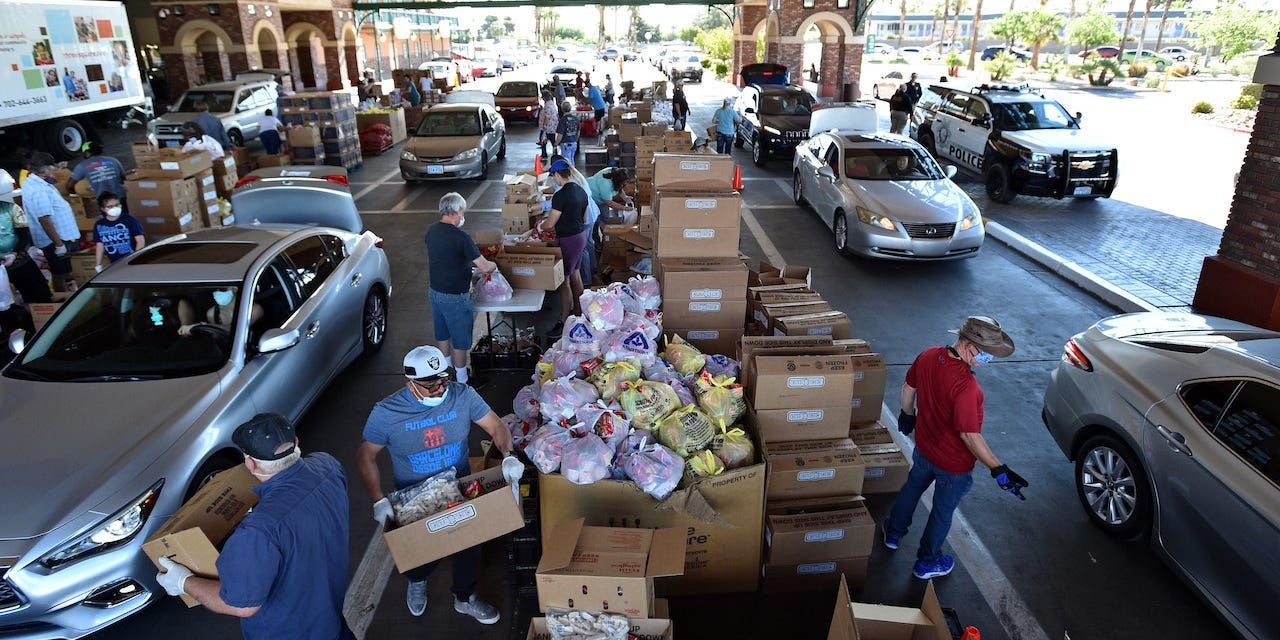 DAVID BECKER/Getty ImagesVolunteers at a drive-thru food-distribution site in Las Vegas on April 29.

Congress passed both forms of aid in March as part of the $US2 trillion CARES Act. The $US600 weekly federal unemployment aid that was a part of that law expired in July.

Economists have been raising alarms about this for months as lawmakers have failed to reach a deal. They have said Congress’ failure to pass a new relief package will have severe and long-term effects on American families and the health of the US economy.

Like COVID-19, unemployment has disproportionately affected Black and brown Americans, the report said.

A temporary national ban on evictions is also set to end on December 31, which could plunge the most vulnerable Americans into even more desperate situations. Student-loan forbearance implemented during the pandemic also expires on December 31.

Andrew Stettner, an unemployment researcher and coauthor of the Century Foundation report, told The Washington Post that the country was “careening into this huge cliff” and that lawmakers were ignoring the emergency.

“People are just totally, completely ignoring the situation at a time when things are getting worse before they’re going to get better in terms of public health,” he said.


Read more:
Time to drop the disappearing act. Pence allies say the lame-duck VP needs to stay in the public spotlight if he wants to be a viable 2024 presidential candidate.

A total of 21.1 million Americans are receiving unemployment aid as COVID-19 cases spike across the country. As of Wednesday, more than 11.4 million Americans had been infected by the coronavirus, and more than 249,000 people had died, according to Johns Hopkins University. Cases and hospitalizations have surged in much of the country as many people plan to travel to visit family and friends for the holidays.

Republicans and Democrats are at odds over the amount of aid needed in a new stimulus package. While the Democratic-controlled House has suggested two bills worth $US3 trillion and $US2.2 trillion, Republicans have proposed $US500 billion in new spending. Congress is also facing a deadline on December 11 to pass a spending bill to prevent the federal government from shutting down.

But negotiators for the two parties haven’t met since before Election Day, and lawmakers don’t appear close to making a deal.