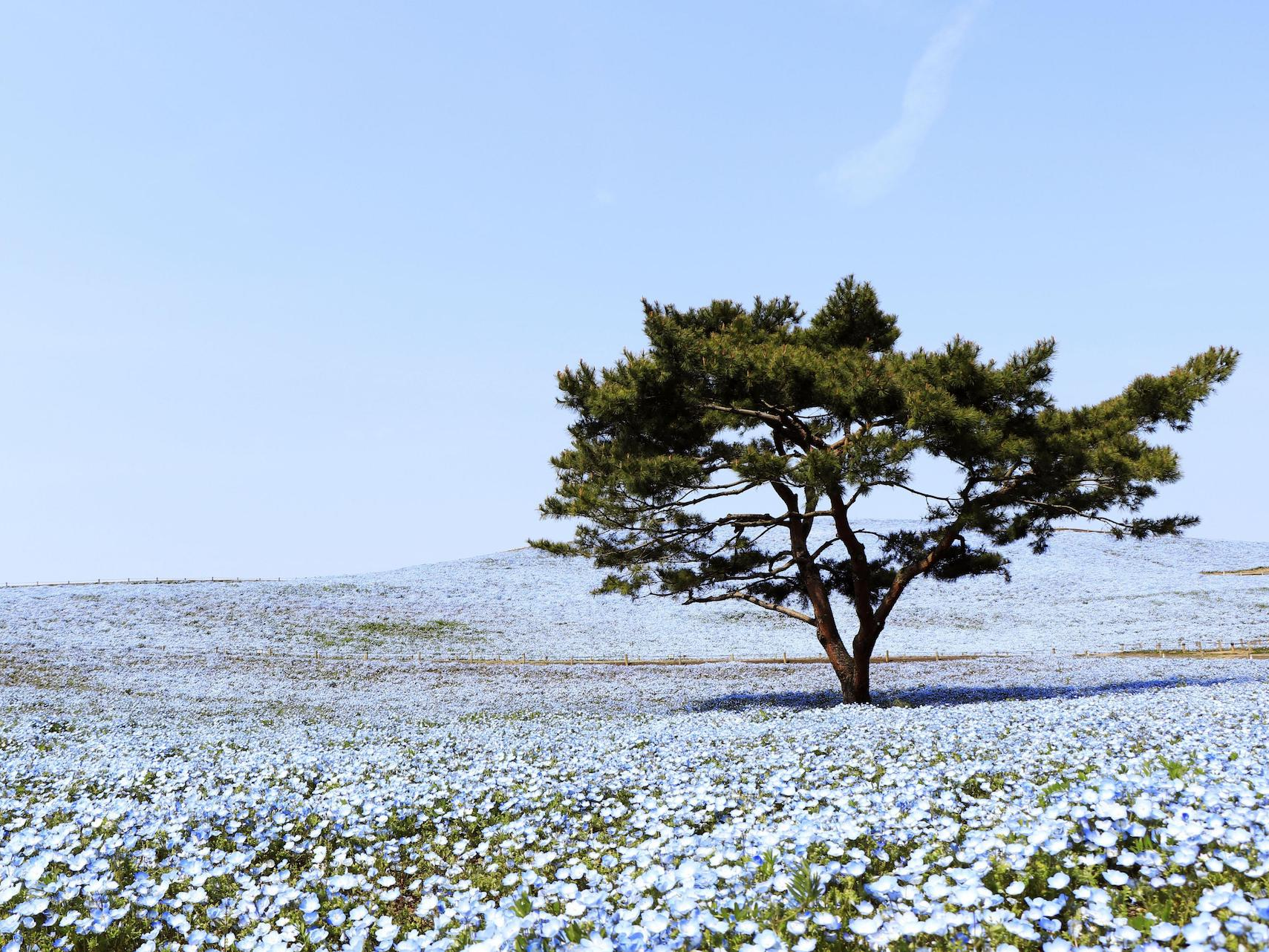 When most people think of flowers in Japan, the kind that almost always first spring to mind are cherry blossoms.

But just two hours north of Tokyo lies an incredible sight: A sea of 5.3 million flowers, so blue they almost blend in with the sky.

Nemophila, also known as “baby-blue eyes,” are currently blooming at the Hitachi Seaside Park in Hitachinaka. 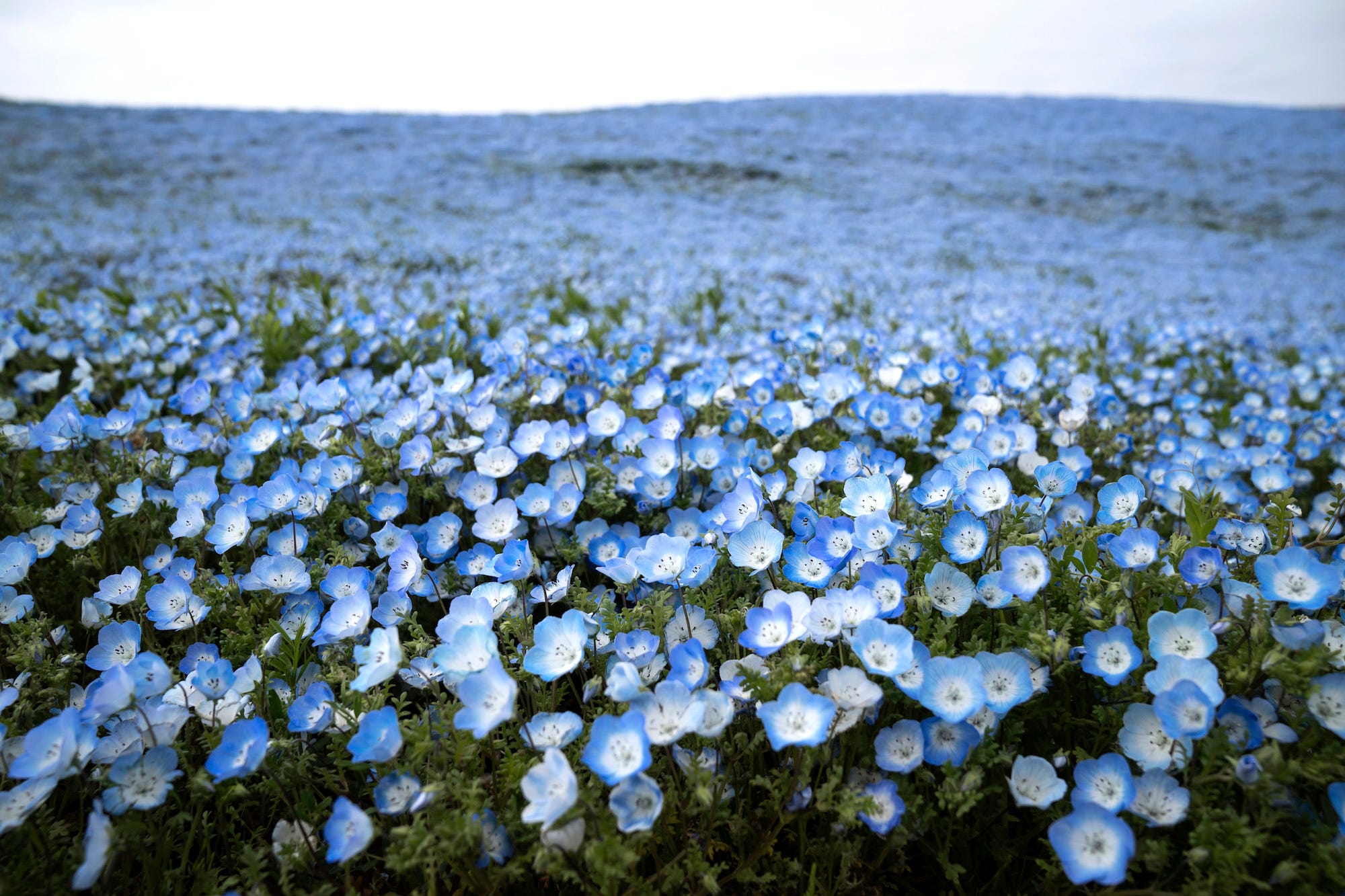 They fill 3.5 hectares of the vast park, stretching across the equivalent of more than six football fields.

Usually when the nemophila are in bloom from late April to mid-May, their fields are dotted with thousands of tourists snapping Instagram-worthy pictures. 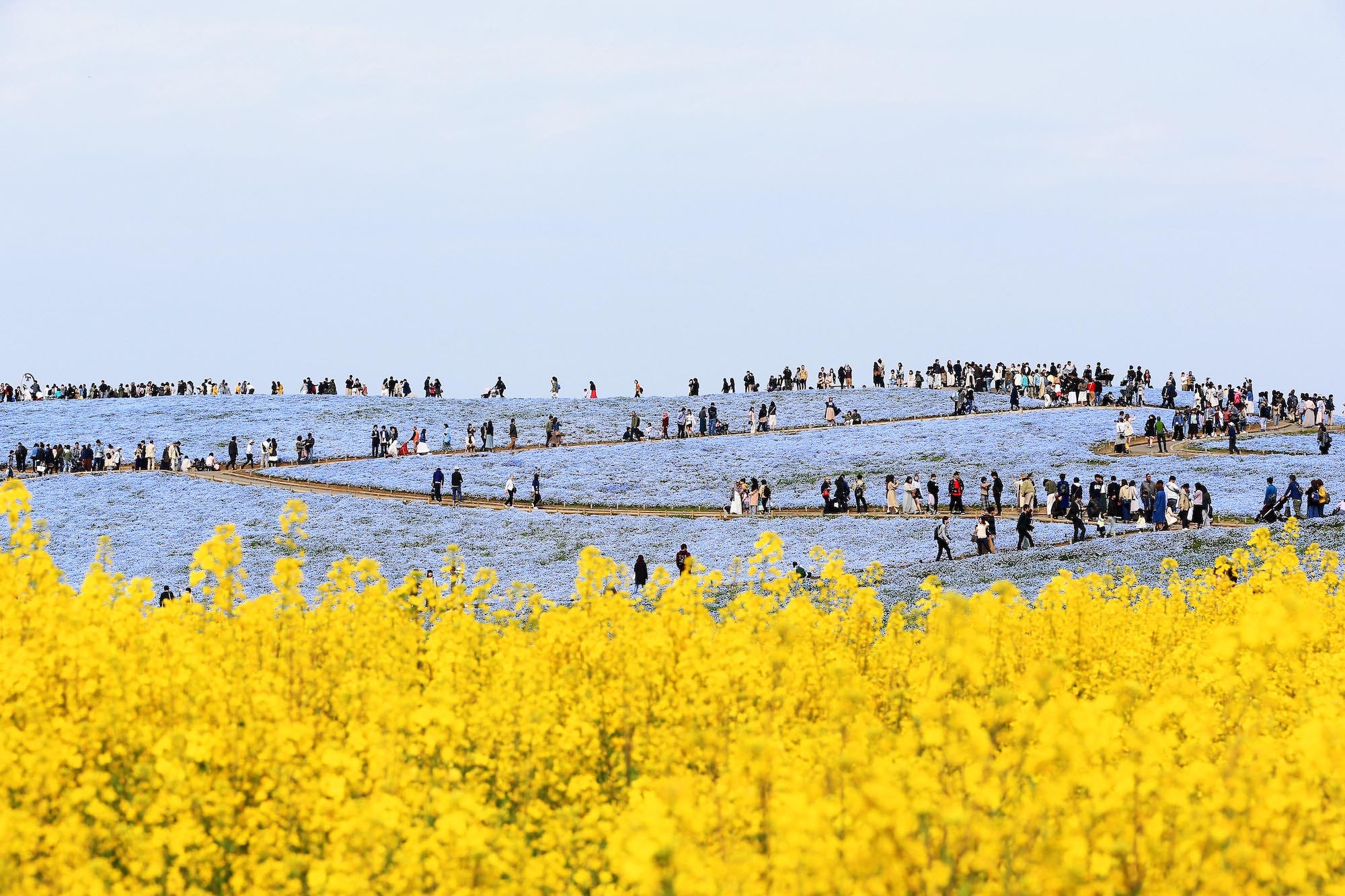 The Asahi Shimbun via Getty ImagesVisitors enjoy the nemophila fields at Hitachi Seaside Park on April 21, 2019.

But the park has been closed since April 4 due to the ongoing pandemic.

New photos of Miharashi Hill, where the nemophila grow, show the beautiful blue flowers in all their glory. 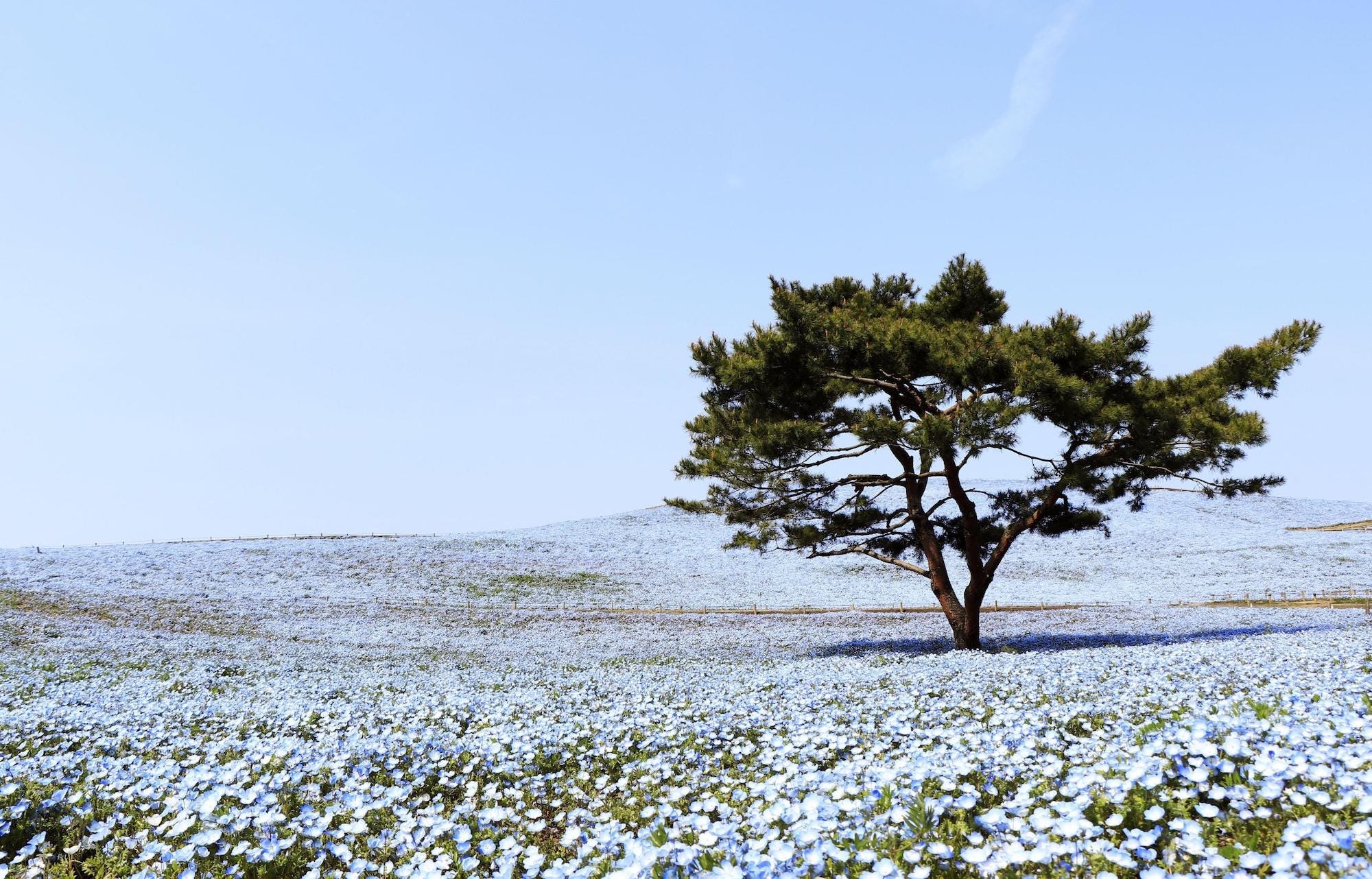 The sea of baby-blue flowers blooming in the empty fields has created an incredible sight.

Nemophila, which are called “rurikarakusa” in Japanese, are actually native to North America. 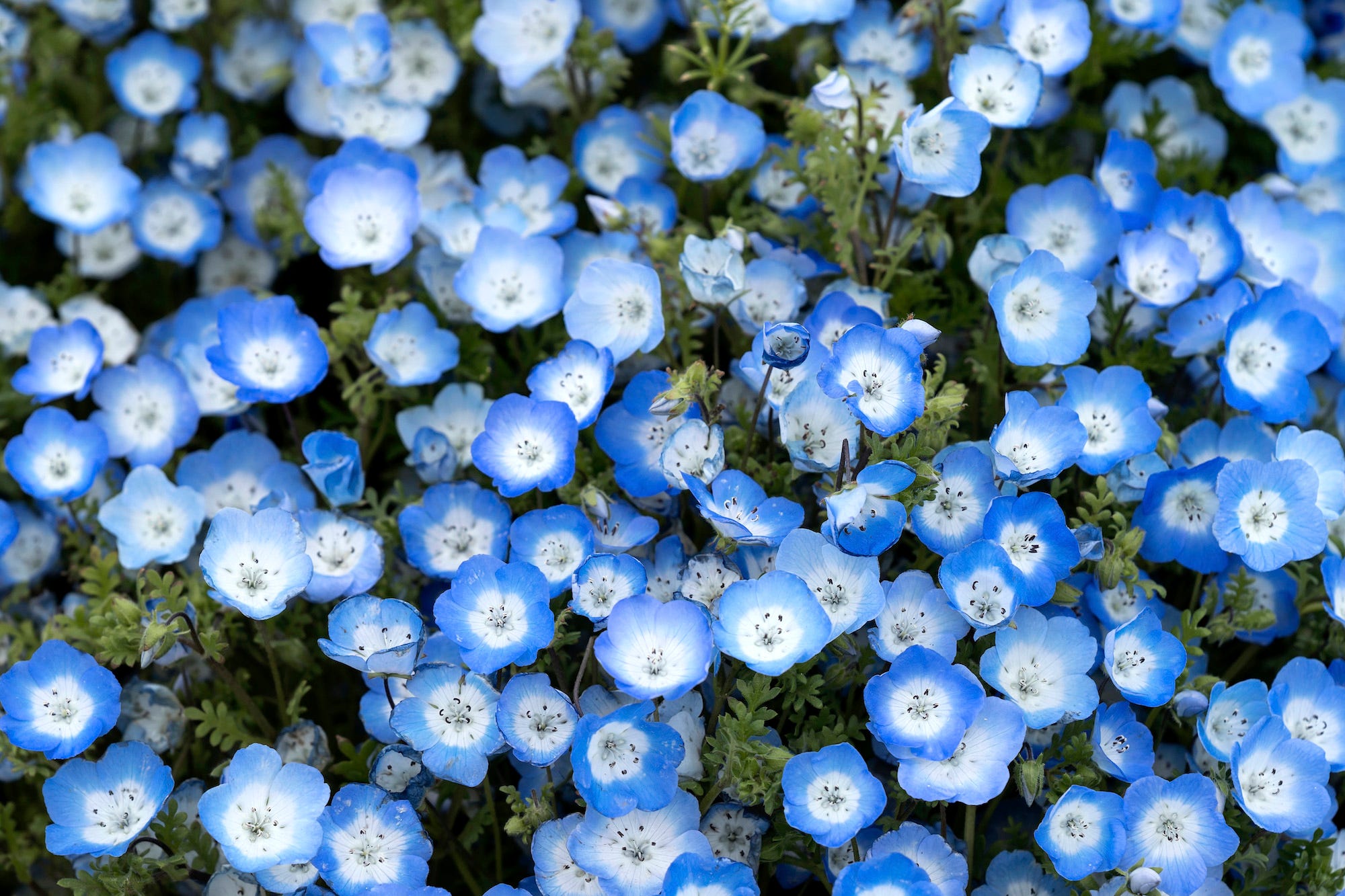 The small flowers only grow between two to three centimeters in size, according to the Hitachi Seaside Park’s website.

While nemophila rarely steal the show in American gardens, they are no doubt the stars at Hitachi Seaside Park.

And the beautiful sights at Miharashi Hill don’t just appear in the spring. 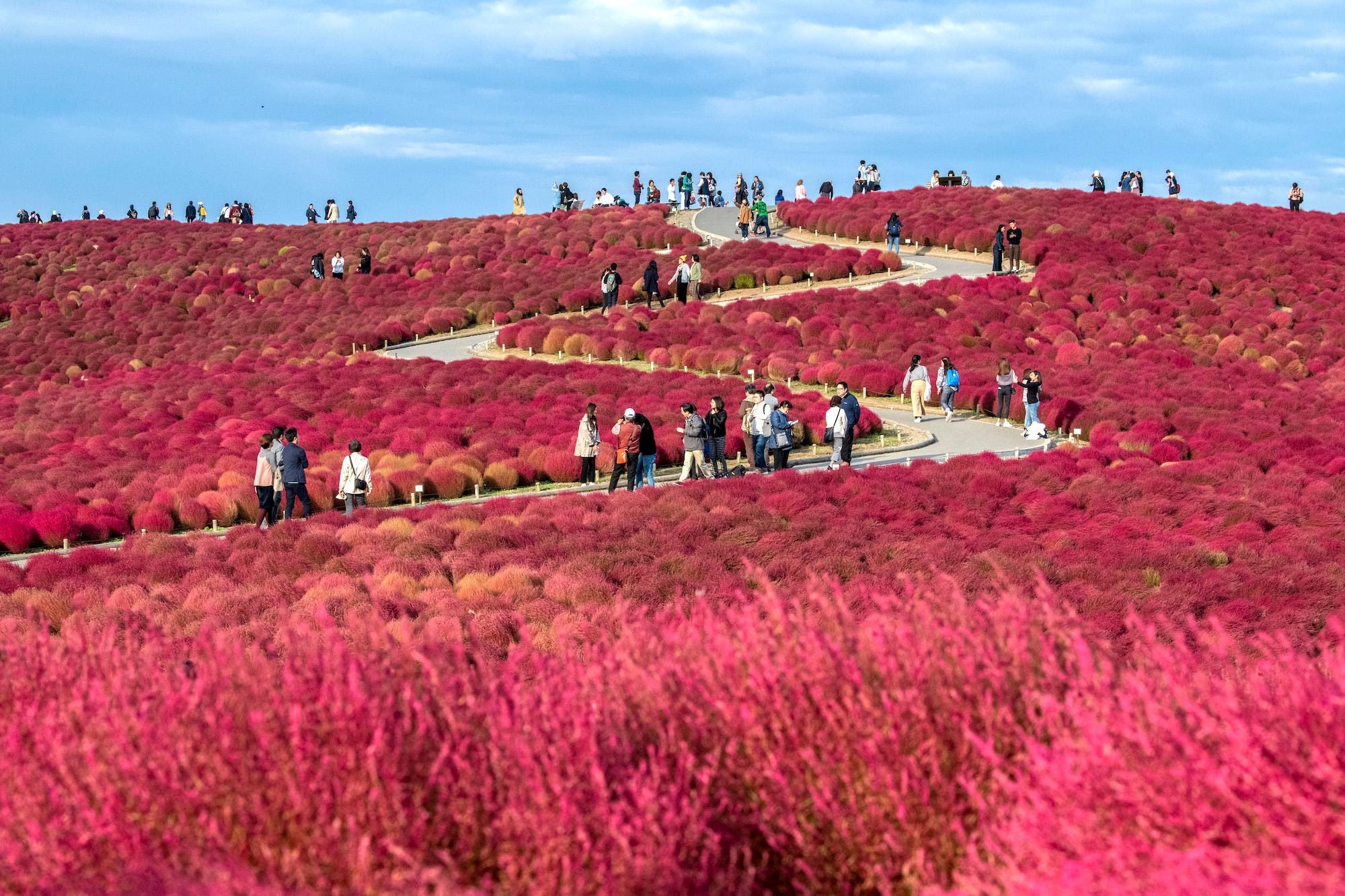 Carl Court/Getty ImagesVisitors walk through a field of kochias at Hitachi Seaside Park in October 2018.

When autumn arrives, the entire area is covered in kochia plants that turn from a lush green to a gorgeous scarlet.

With their fluffy texture and vibrant colour, the field looks like something straight out of Dr. Seuss’s beloved book “The Lorax.”

There’s plenty to see at Hitachi Seaside Park, which has 190 hectares of land usually open to the public. 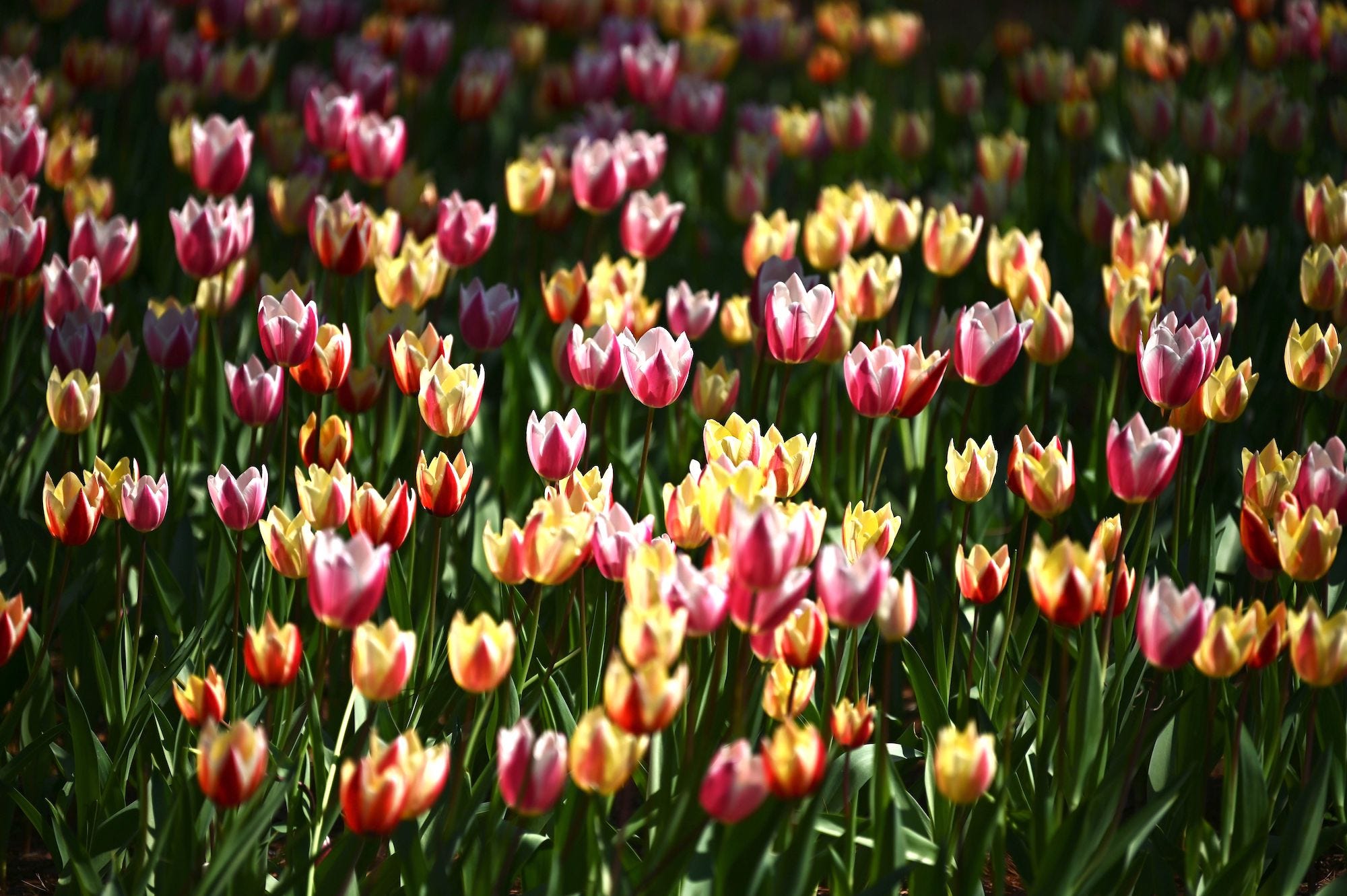 CHARLY TRIBALLEAU/AFP via Getty ImagesTulips are pictured at Hitachi Seaside Park on April 15, 2020.

Over at the Narcissus Garden you’ll find one million daffodils blooming in the spring. There’s 260,000 tulips at the Tamago Flower Garden, which was inspired by Holland and features a miniature windmill. And the Hitachi Rose Garden has plants that are kept short so that small children and wheelchair users can enjoy them.

The park even has a handy guide on its website homepage so that visitors can keep track of what flowers are currently in season.

Amid the millions of flowers you’ll even find an amusement park. 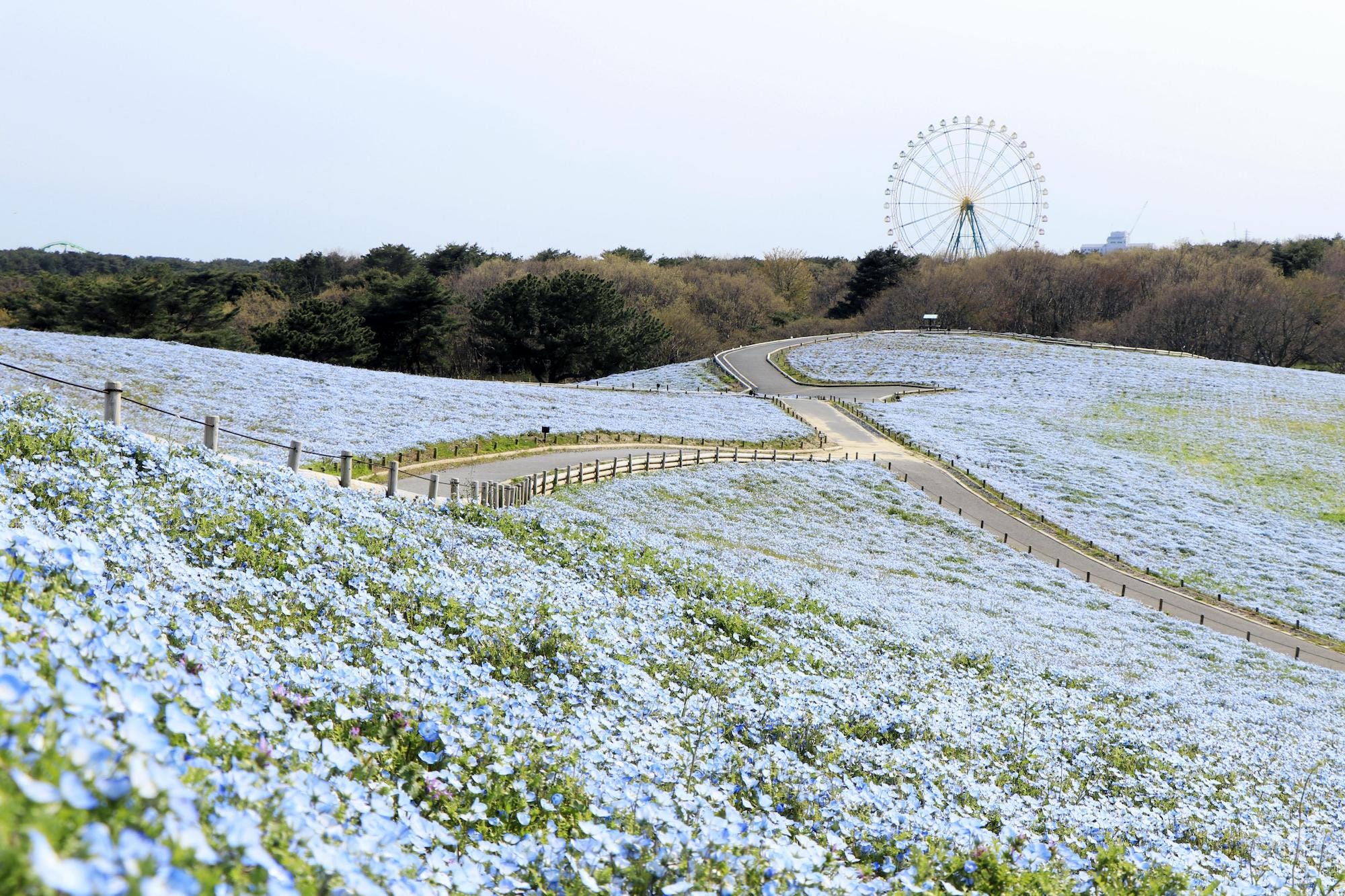 The Pleasure Garden at Hitachi Seaside Park features more than 25 rides, including a Ferris wheel that features stunning views of the Pacific Ocean.

There’s also a forest adventure playground for kids, a barbecue area, and plenty of walking trails and cycling paths.

While Hitachi Seaside Park may currently be a utopia of stunning flora, it used to be a site of destruction. 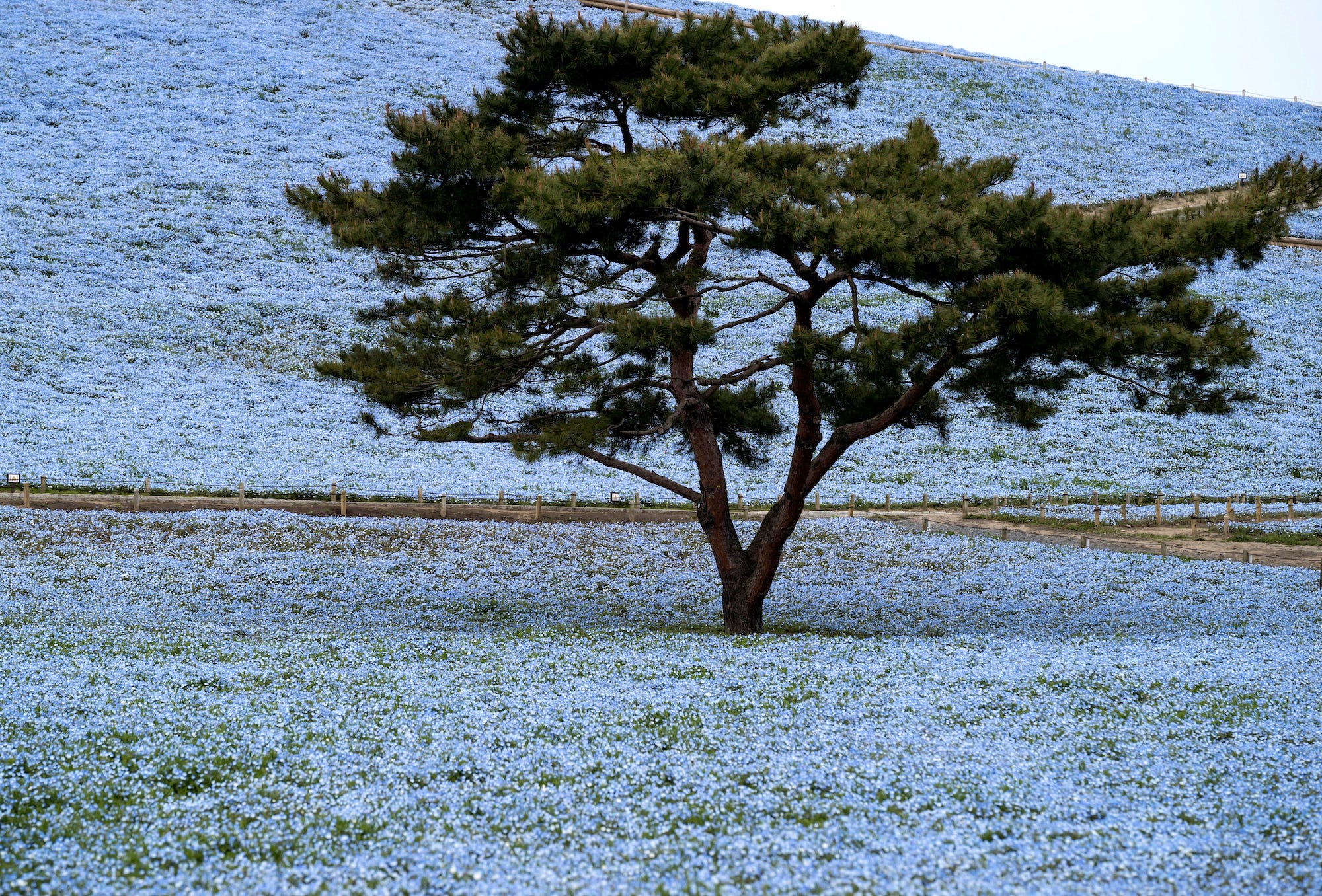 Tomohiro Ohsumi/Getty ImagesNemophila flowers are in bloom at Hitachi Seaside Park on April 16, 2020.

The area was a military airport before being converted into a firing and bombing range for the US Air Force after World War II, according to the park’s website.

After a number of innocent people were killed in accidental bombings, the locals fought for the land to be returned to the Japanese government.

The US returned the area in March 1973, and residents requested that it be turned into a park as a symbol of peace. 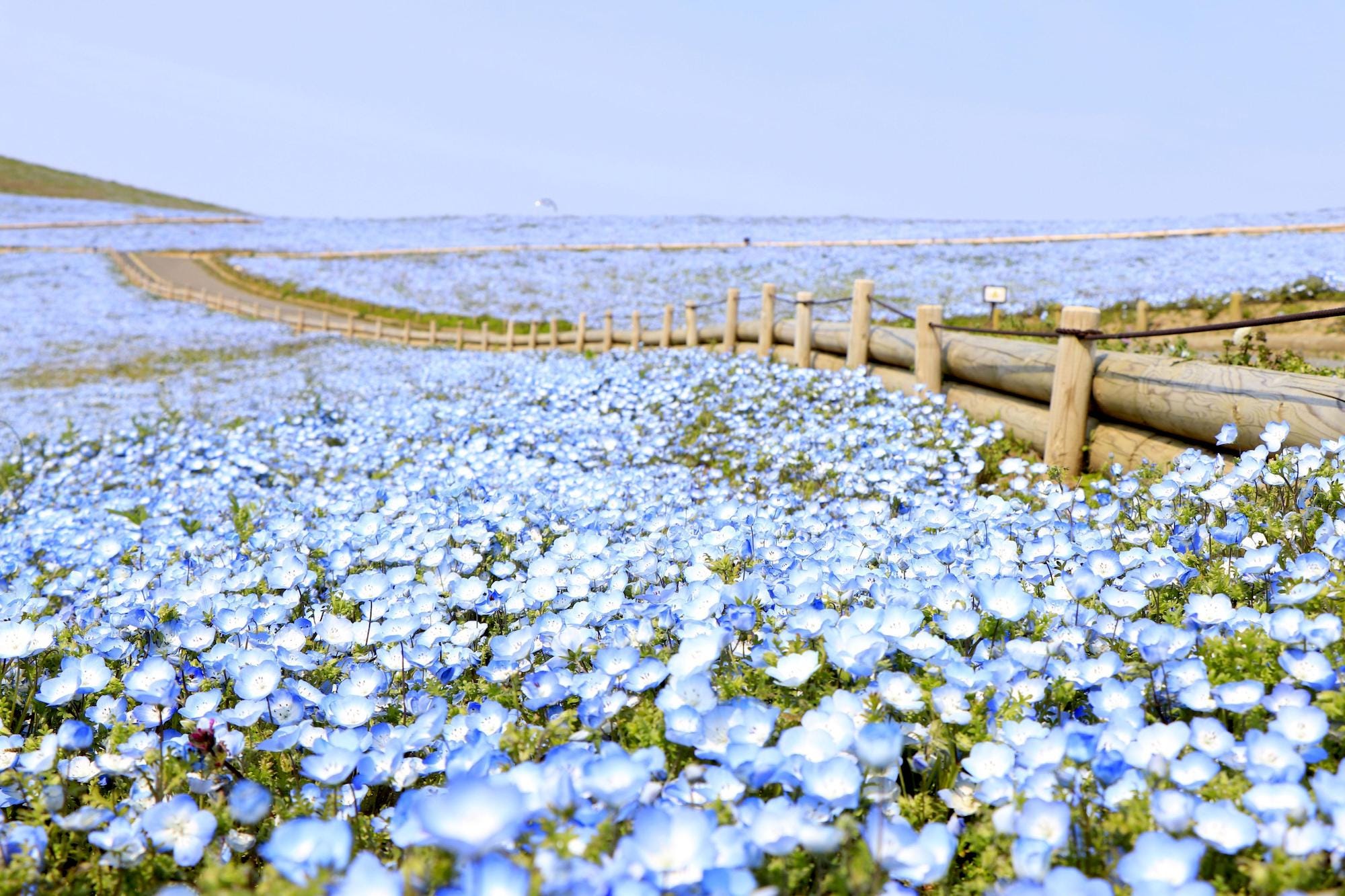 Hitachi Seaside Park opened its doors in 1990, according to the park’s website.

“The hills that had been the target for countless bullets and bombs were transformed into a paradise of flowers.”