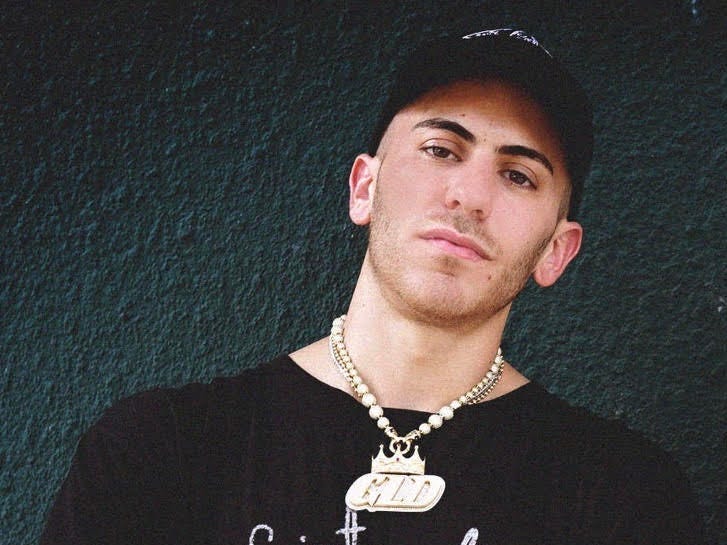 Each year, jewellery brand GLD pulls into Rolling Loud, one of the world’s largest hip-hop festivals, in a refurbished ice cream truck. The goal: to sell pendants and watches to festival-goers. The mantra: to just have a good time.

The brand is cool enough to snag partnership with the NFL, the NBA, the MLB, and Marvel, creating pendants designed as superheroes, and with basketball, football, and baseball team logos.

Johnston, 28, cofounded GLD alongside his childhood friend, Dan Folger, 27, in Pittsburgh, Pennsylvania, in 2015. Growing up, Johnston told Business Insider, they both always wanted to have nice jewellery, but never had the option to buy any for an affordable price.

“You either had to spend thousands of dollars or you were getting something that was not so nice and you couldn’t really be proud of,” Johnston said. “To me, you should always be proud of your jewellery if you’re going to have it.”

Each put just under $US1,000 into the idea of making high-quality jewellery at a lower price point and the concept was a hit.

Five years later, the company is on track to do $US50 million in revenue before the end of this year, per documents reviewed by Business Insider.

GLD, a play on the word “gold,” seeks to create affordable jewellery for the aspirational customer. A Rolex, for example can go anywhere from $US5,000 to above $US12,000. The lowest-priced â€” and best-selling â€” GLD watch goes for $US899.

It’s a watch that is fully covered in diamonds â€” a process known as “icing.” It is offered in either 18-carat plated gold or 14-carat solid gold, with the dial options of either white, red, and black. 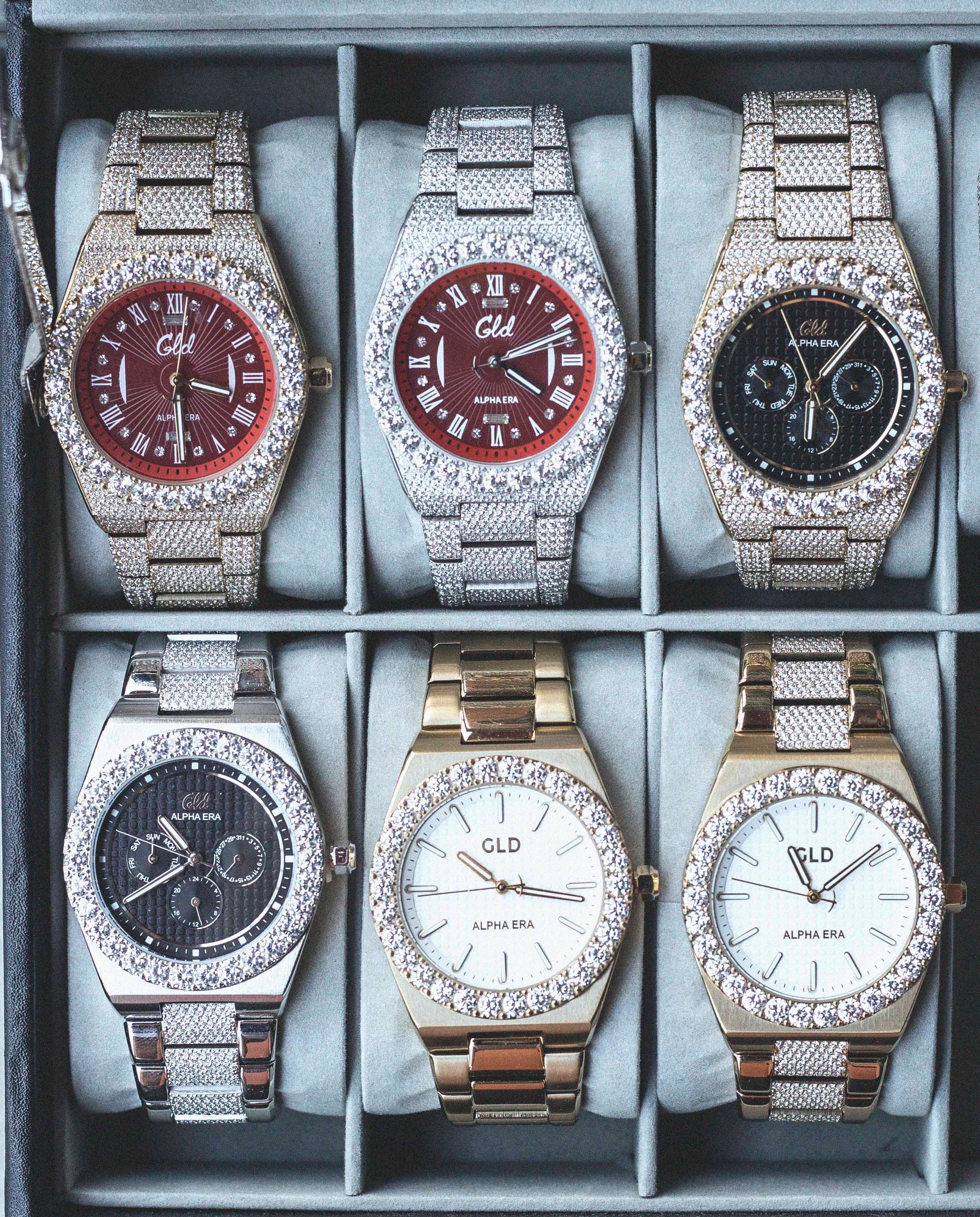 Watches take a long time to produce, Johnston said, but GLD aims to create products that can compete with the Rolexes and the Audemars Piguets that the average consumer is priced out of buying. This means paying close attention to how the band, case, bezel, movements, and dials come together.

Johnston said he is also particular about the types of diamonds he uses, making sure to source from a dealer that allows him to track each diamond’s origin.

One of GLD’s first celebrity clients and supporters was Pittsburgh native Wiz Khalifa, who Johnson met through his manager back when Khalifa was just starting out in the rap game, he said. The company has since been able to expand its brand to heavy-hitter clients such as Justin Bieber and Cardi B.

Johnston credits GLD’s Instagram presence for its brand growth, saying that GLD stayed consistent in posting content that showcased the brand and its products. The aesthetic of the brand is streetwear, glitz, and new money glamour, so its Instagram has photos that show rapper Rick Ross decked out in GLD diamond chains and a GLD watch wrapped around a bottle of Veuve Clicquot champagne. 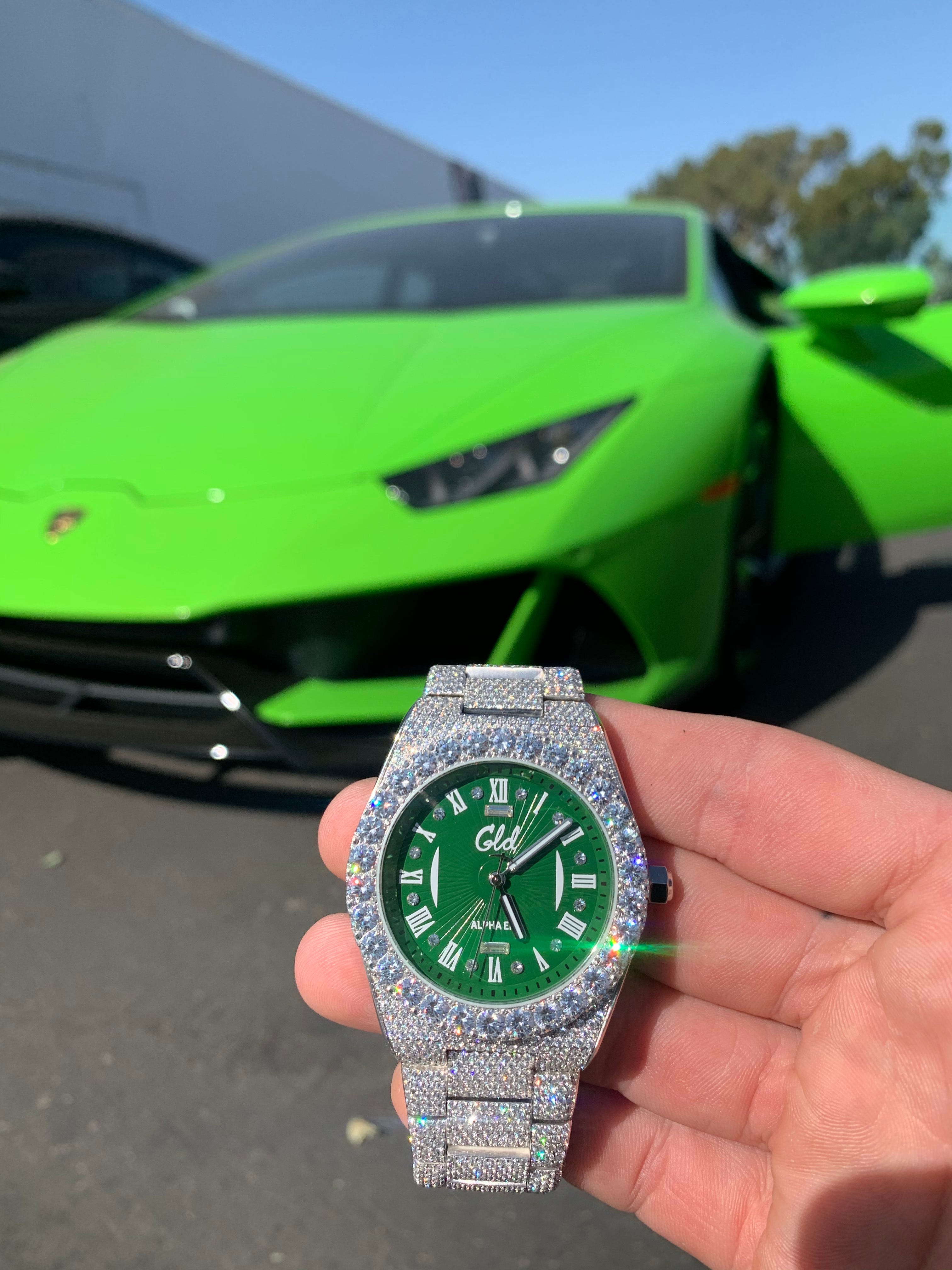 GLD currently has just over 1 million followers on Instagram, and many clients, like Bieber, make requests through the social platform’s direct messaging service. 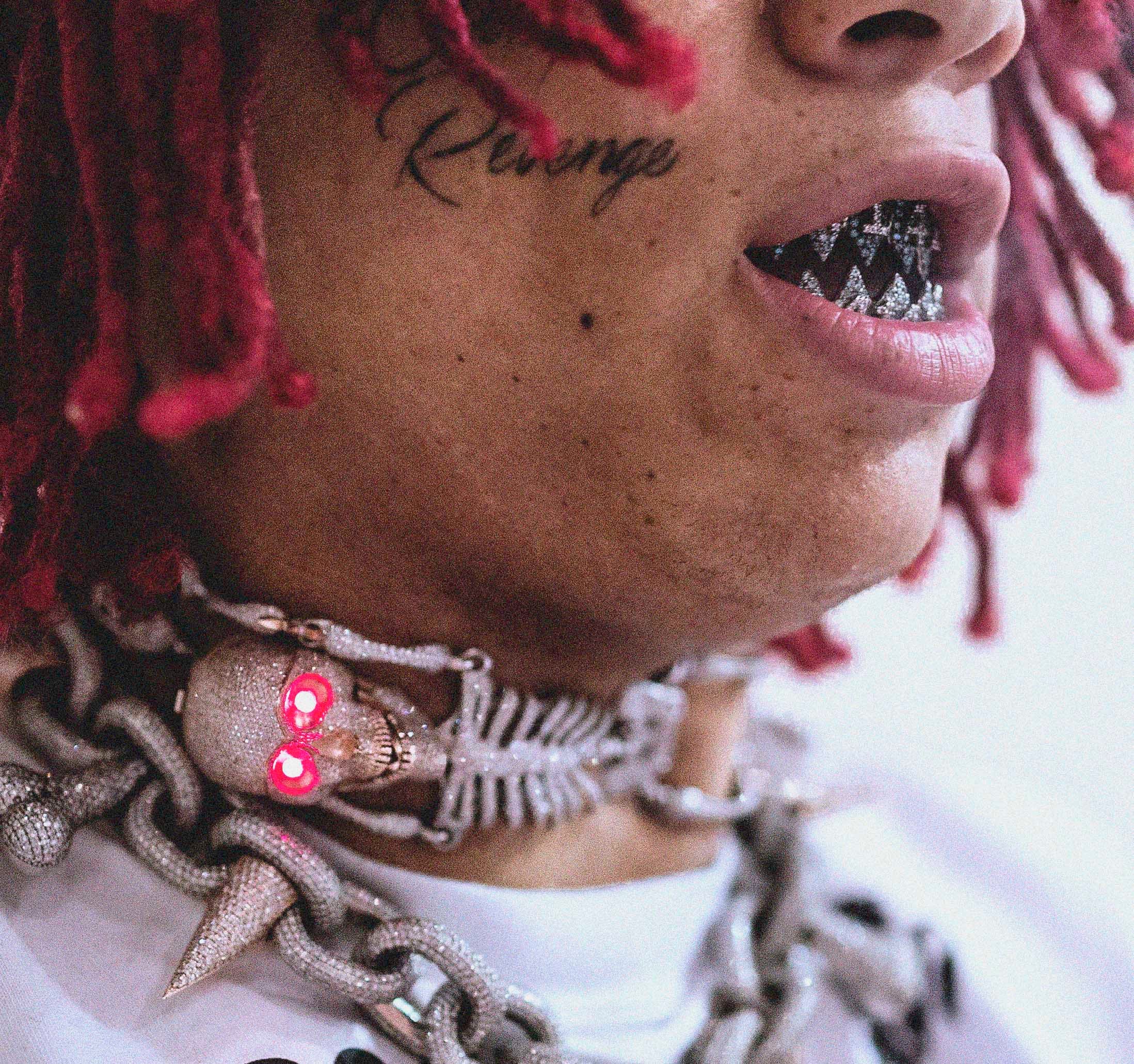 Those are extreme circumstances, however. Johnston said it typically takes them about a month to create each piece. One of the company’s most memorable requests came from rapper Trippie Redd, who asked for a diamond choker necklace that fit perfectly around his neck. The choker is valued at around $US100,000.

“It was a skull that was bending backwards and the eyes lit up,” Johnston continued. “There was an on-and-off switch and the eyes had neon lights in them. [Redd] wears jewellery everywhere, so we had to make it waterproof.”

‘You ice something out completely, you do risk potentially losing some value’

Though GLD is known for making iced-out jewellery, Johnston acknowledged the risk of icing out a product too much.

Business Insider has previously reported on how watches such as Rolex, Philippe Patek Audemars Piguet, Richard Milles are typically seen as an investable asset class that retains its value over time. These watches are often made in styles that are seen to be classic and timeless.

But there’s no telling how much an iced-out Richard Mille will go for in 20 years.

“In general, you ice something out completely, you do risk potentially losing some value,” Johnston says, adding that the investment value of a watch is tied to what’s trending among consumers.

“If you do it right, it will keep the value,” Johnston continued. “You have to make sure you’re putting the right diamonds on to keep with the value of the watch and have the diamond paperwork to back it all up.” 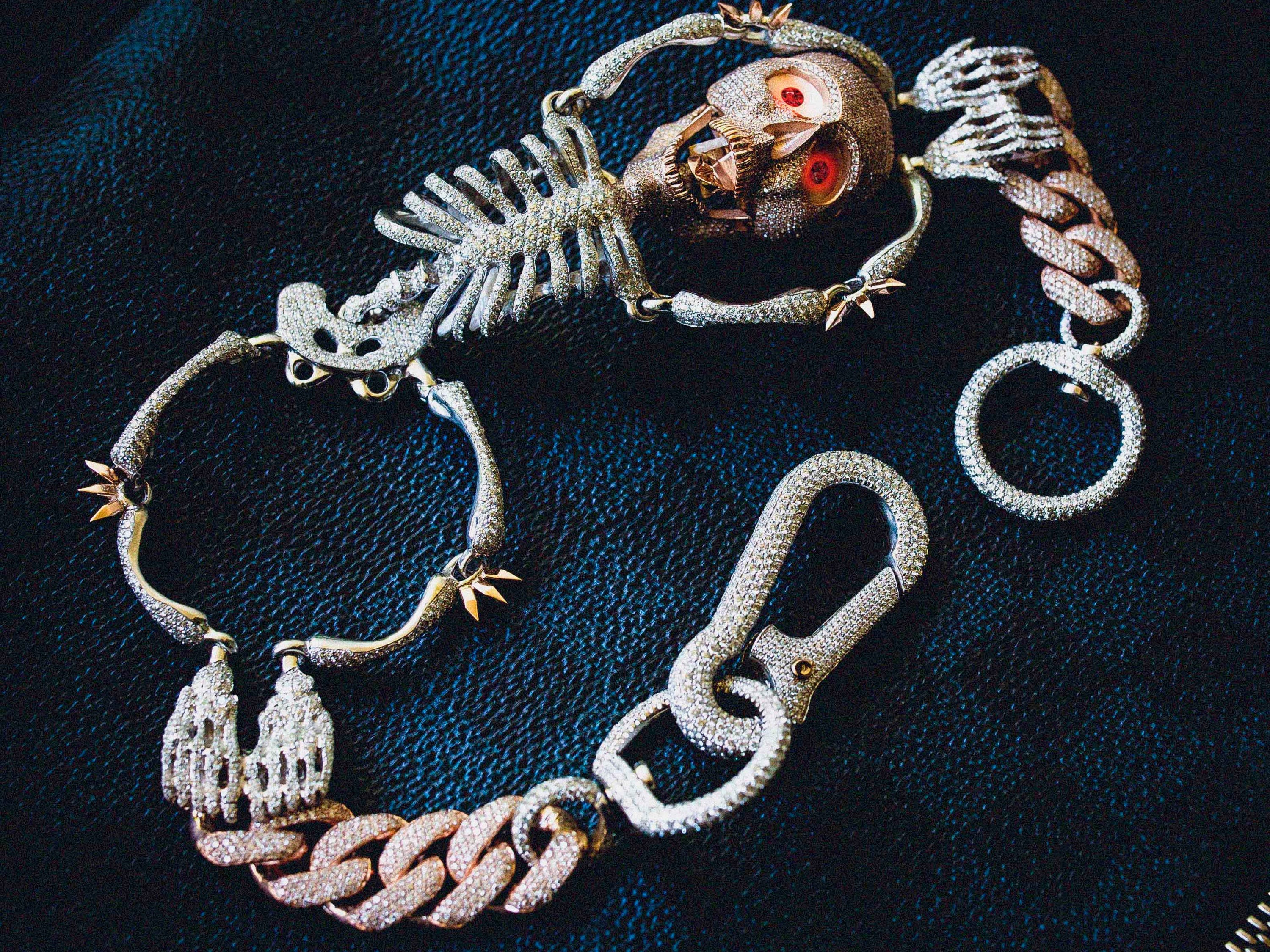 Courtesy of Christian Johnson cofounder of GLDUp close of the Trippie Redd choker.

Right now, the demand for iced-out diamonds has propelled GLD to popularity. Three years ago, the company relocated from Pittsburgh to Miami, and amid the pandemic, the company moved to an even larger space, doubling its team to 55 employees.

Johnston said the coronavirus pandemic hasn’t financially affected the company and credits its strong brand identity and loyal customer base with putting it on pace to reach $US50 million in sales this year.

“There were definitely challenges that came from it on the back end,” Johnston said. “Just in terms of keeping people safe, and my operations and things like that. But in terms of sales, we’ve had a great year. We didn’t have to lay off any people.”

During this time, the company has been focusing on its partnerships. In 2019, GLD entered into a partnership with both the National Basketball Association and Disney’s Marvel, the latter of which has yet to be released. This year, GLD formalized its partnership with the NFL and released its collaboration with the MLB. 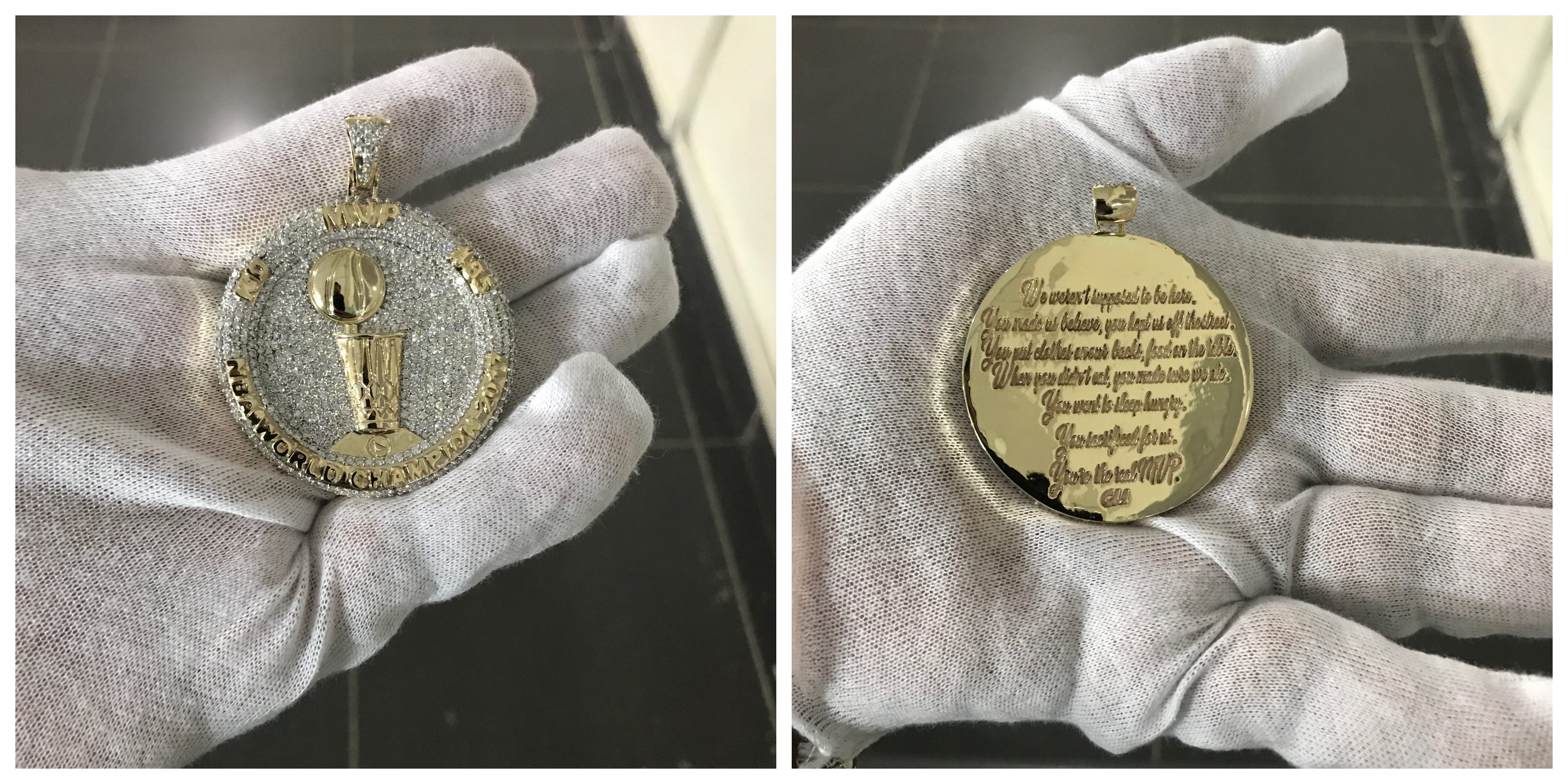 Courtesy of Christian JohnstonThe piece GLD made for Kevin Durant

It’s a testament to taking one’s time, Johnston said. It took him five years to exceed 1 million followers on Instagram, he said â€” a piece of cake compared to what it took to formalise its partnership with the NBA.

“There’s a lot of things you gotta do to become eligible to work with the NBA,” he says. “They’re very specific with who they work with.”

He said there was not only a lot of paperwork, but associates from the NBA came to GLD to inspect its factories and its full behind-the-scenes process of how makes jewellery.

“Luckily we, from the beginning, always made it a point to do things the right way,” he said. “I think that’s made it a lot easier.”