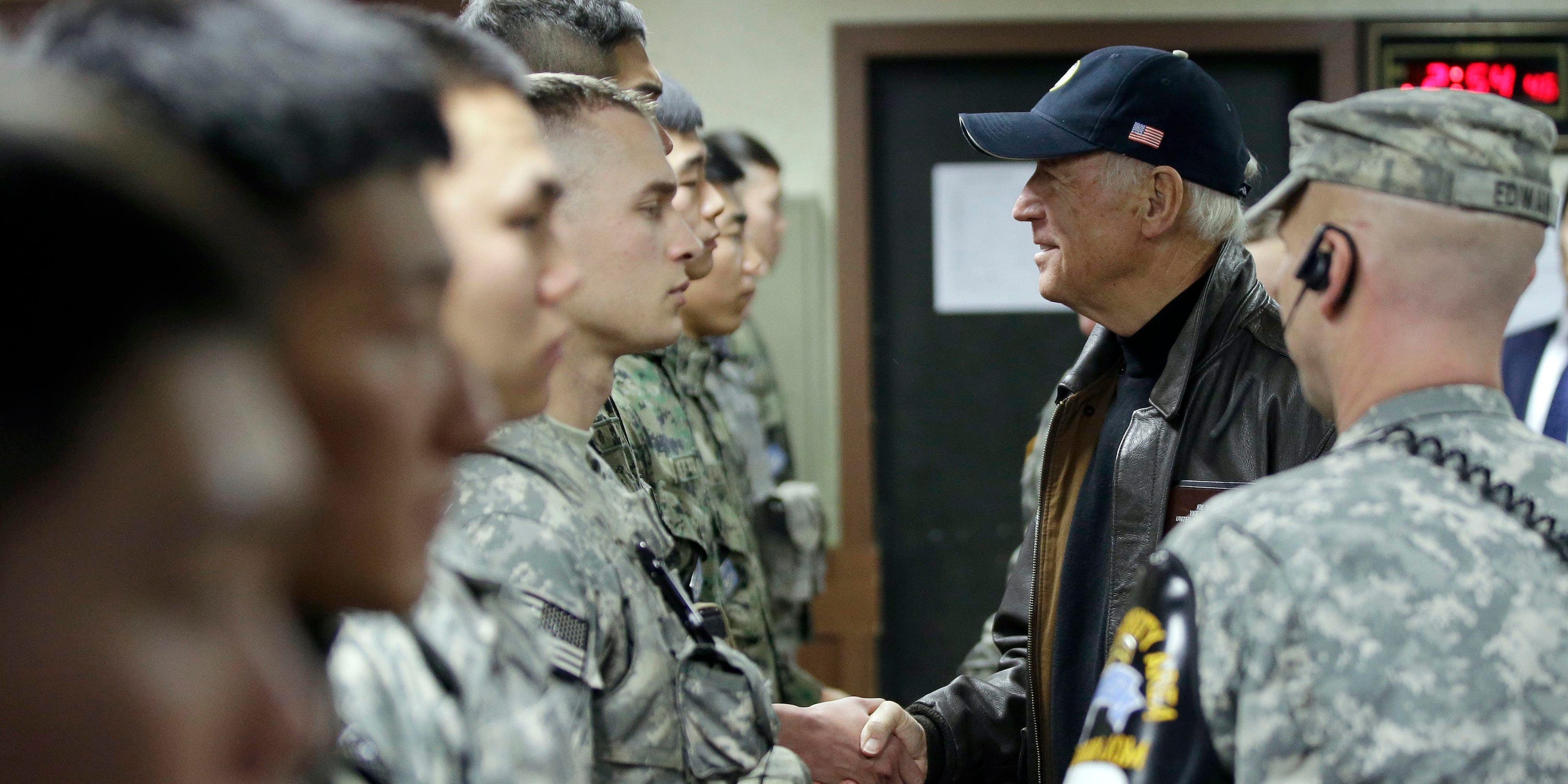 Lee Jin-man/Pool via APThen Vice President Joe Biden with South Korean and US soldiers inside the Demilitarized Zone on December 7, 2013.

President Donald Trump’s 2020 reelection campaign on Wednesday filed a lawsuit against the state of Michigan, alleging the ballot-handling and -counting process had disenfranchised voters through “fraud and incompetence.”

Attorneys for the campaign attached to their lawsuit dozens of notarized statements from Michigan voters, Republican poll watchers, and other observers to corroborate Trump’s claims â€” including one who said it was peculiar that droves of US service members voted for President-elect Joe Biden.

“I did find it odd that, throughout the day/night, I saw a few dozen military ballots be counted,” a certified poll watcher said in his statement dated November 4. “Although I cannot provide specific numbers or names, I can estimate that at least 80% of the military ballots I saw were straight ticket Democrat or simply had Joe Biden’s name filled in on them.”

“I had always been told that military personnel tended to be more conservative, so this stuck out to me as the day went on,” he added.

The poll watcher, who was stationed at the TCF convention centre in Detroit and said he had a “GOP network of friends,” also alleged he faced intimidation by his colleagues after scrutinizing their actions and calling for a ballot review. He was eventually escorted out of the location by police officers after debating with a supervisor.

The layout of absentee ballots vary by state, and some designs make it easier to tell if they are from a US service member. Overseas Michigan residents, such as service members, are allowed to vote through an electronic ballot that may be mailed in the event that physical ballots are not available â€” on top of these ballots are the words “MILITARY AND OVERSEAS VOTER BALLOT,” according to a Michigan Bureau of Elections manual dated March 2018. 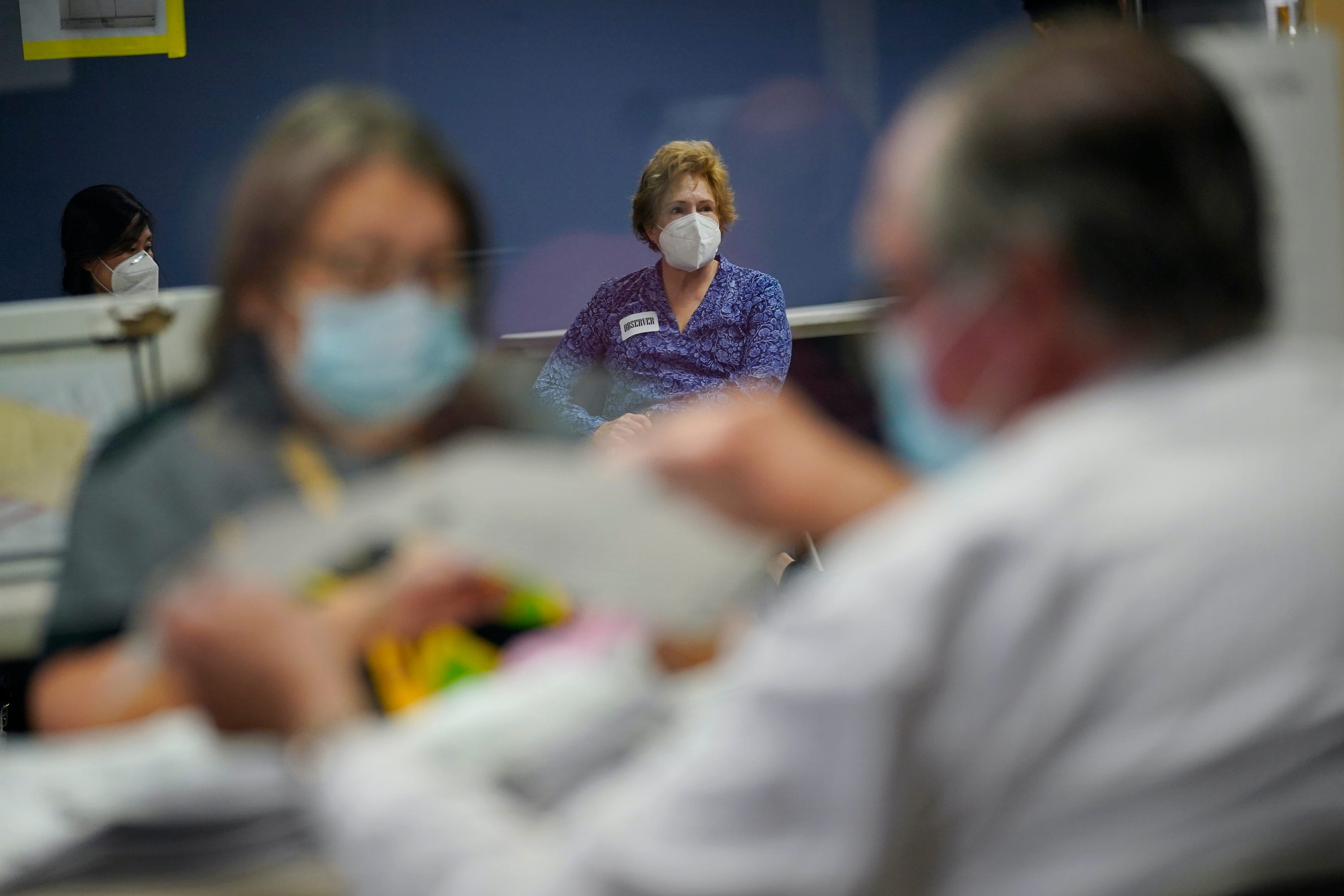 But the poll observer’s anecdote of seeing an overwhelmingly majority of “military” ballots at his location supporting Democrats is being met with some pushback, particularly in the wake of Trump’s declining approval rating in recent polls and his attitude toward some veterans.

According to a poll from the Military Times and Syracuse University’s Institute for Veterans and Military Families conducted in July, 42% of 1,018 active-duty military respondents said they strongly disapproved of Trump’s tenure at the White House. Nearly half of the poll’s respondents said they viewed Trump unfavorably. That poll showed Biden with a 4-percentage-point lead over Trump.

But a separate Morning Consult poll found Trump with a 10-percentage-point lead over Biden from military-affiliated households in October.

Despite Trump’s professed love toward US service members and veterans, several reports published this year have thrown that rosy assessment into doubt. In September, The Atlantic published a scathing report that said Trump disparaged dead military veterans.

The report, written by Editor in Chief Jeffrey Goldberg, cited officials who said they heard Trump describing Marines who died during World War I as “losers” and “suckers” and that he did not want injured veterans to appear at a military parade because he believed it would make spectators uneasy.

Trump’s opinion of the late Republican Sen. John McCain, a longtime Arizona lawmaker and US Navy veteran, also incensed veterans’ groups and congressional leaders with military service. After McCain died from an aggressive form of brain cancer in 2018, Trump was angry when the senator received half-staff flag honours, The Atlantic reported. Trump was outspoken about his negative assessment of McCain and previously rejected the notion of describing him as a war hero “because he was captured” during the Vietnam War.

“The current military is as diverse as the population we are drawn from and serve,” a Common Defence spokesman told Insider. “And if there is one thing that unifies us, no matter where we fall on the political spectrum, it is our frustration with the perception that we are the props for any particular politician or political party.”

The spokesman added: “Common Defence has campaigned for four years to mobilize veterans in swing states like Michigan to vote against Donald Trump, and so it is no surprise to us that military ballots in Detroit favoured President-elect Joe Biden.”

Trump’s allies have relied on anecdotal evidence, such as the poll observer’s claim in Michigan, and set up hotlines offering rewards to those who can corroborate their allegations of voter fraud. For instance, Texas Republican Lt. Gov. Dan Patrick this week offered $US1 million of his own money for evidence of voter fraud.

So far, the Trump campaign’s lawsuits in numerous battleground states have lacked evidence. According to a New York Times report published Tuesday, election officials from 45 states said they witnessed no evidence of fraud or major issues with voting. Insider’s Grace Panetta previously reported an “American is more likely to be struck by lightning than to commit election fraud,” citing a dataset of past convictions.