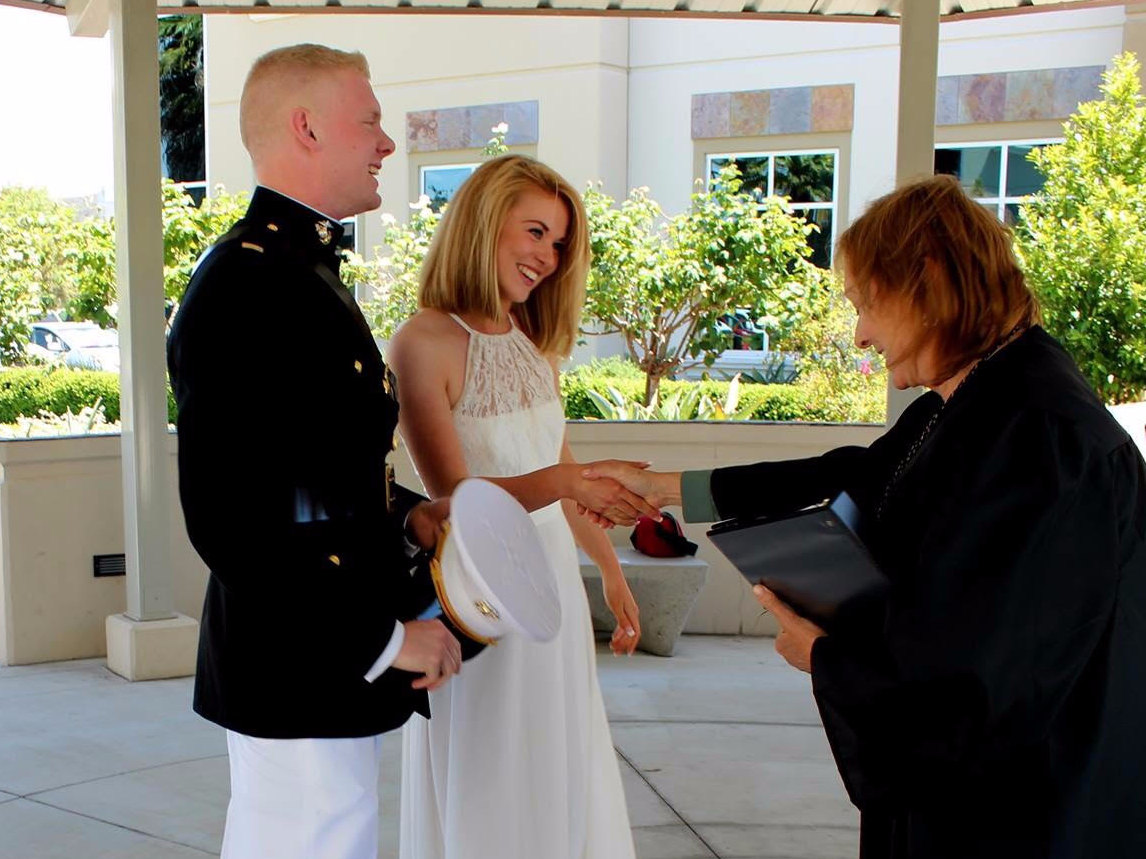 Amy BryneBeing a military spouse probably isn’t exactly how you think it is.

The day my husband swore into the US Marine Corps, his veteran grandfather gave me a book that had belonged to his late wife: “The Marine Corps Wife,” published in 1955.

This marked the first of many sources I came across in my quest to figure out Military Spouse 101; as a new, eager (and, frankly, naive) military wife, I was desperate to *prepare* myself for the life that lay ahead of me.

I was met with (what I believed to be) a veritable charcuterie of articles and forums -but as the years went by, I noticed that there was something missing. The spread was inadequate, repetitive, and at times, toe-curlingly tacky; a little more big box store than French boutique, if you will.

There’s a slew of contemporary literature out there for the prospective military bride, but among the messages about “stages of deployment,” care packages, and (yawn) PCS season, there are myriad mil-nuances that your average milspouse blogger will omit.

The truth is, there’s a delicate disconnect between the star-spangled blogs and real-life immersion in military culture; the too long/didn’t read version is, quite simply, that military life is not real life.

No one – no musty tome or cheery modern blogger -quite prepared me for this.

Granted, I’ve drunk my fair share of military Kool-Aid (and -yikes –tap water) in the time my husband and I have been married, but I’m here to tell you about the subtext, the small-print: some of the things you don’t hear about military life. 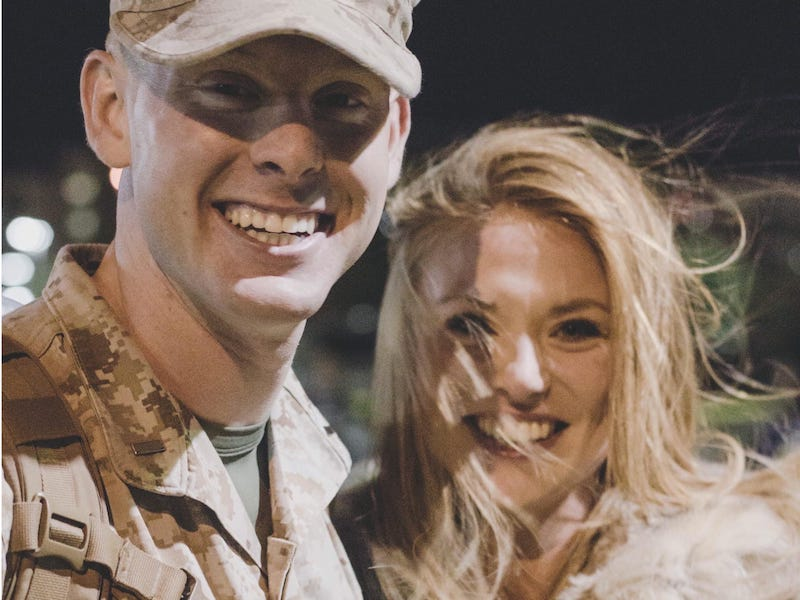 Amy BryneI was naive when I decided to get married.

Being married to a man in the military is not a glamorous life.

Imagine laundry that smells worse than Lake Bandini, dowsing your true love’s blistered feet in hydrogen peroxide, and the smell of MRE farts. And I can’t speak for everyone, but when I think of deployments, I think of cheap wine, popcorn for dinner, and record-breaking Netflix marathons (shout-out to me for slaying six seasons of “Lost” in a month last year).

Even the movie-montage-worthy highlights are largely unspectacular. I’ll take all the flack that comes my way for admitting this, but farewell ceremonies before deployments are, honestly, rather tedious; imagine a lot of standing around for several irksome hours while bags are loaded and fed-up children cry.

Homecomings happen at relatively short notice, rarely do things go according to plan, and there are always those awkward hours of families standing around with bedazzled signs, twiddling their thumbs. There’s the heartbreaking sight of junior enlisted troops trudging off to the barracks without anyone to greet them, the readjustment phase that no clipart-laden pamphlet can prepare you for, and work begins as usual within an obscenely short window of time.

It’s worth it -it’s always worth it -but trust me, nothing about military life is glamorous. Ah, the mother of all military spouse debates: does your husband’s rank determine your social life?!

Unpopular opinion: yes. Yes, it does. A military spouse’s life is at least somewhat affected by their significant other’s job. And yes, it’s as asinine and frustrating as it sounds.

By this, I do not, by any stretch of the imagination, mean that there are ranks among spouses -even my quaint 1950s wife manual states as much, for goodness’ sake -and the (perceived) dichotomy between officers’ spouses and enlisted spouses only exists if one allows it to.

Lore of spouse’s “wearing” rank is, more often than not, just that: a social myth. That’s not to say that wives who refer to “our” promotion or bluster when they aren’t saluted don’t exist, but these rare prima donnas are best left to stew in their own little worlds.

We military spouses do, however, have to accept that our significant other’s job will have some degree of influence over our social life. Fraternization rules dictate who service-members can and cannot be friends with, and therefore, socialising as a couple can get a little thorny. We learn to accept that it’s at least expected that we’ll make an effort with the spouses of our husband’s chain of command (I consider myself to be enormously blessed in that I ended up making some seriously fabulous friends this way).

We also become accustomed to pasting on a smile and being ultra-nice to the people our partner tells us to be pleasant to, even when we’re cranky and would rather not be a circus monkey, thank you very much. 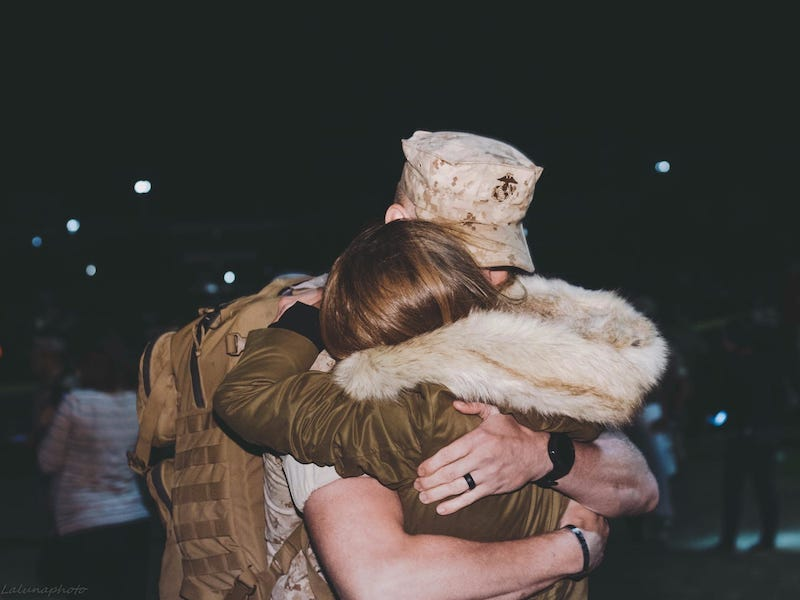 Sorry, not sorry, y’all: military life is pretty archaic. The question of how to solve this is a much bigger one than I can give credence to, so, for now, I’ll stick with a few illuminating personal examples.

Recently, I took a vacation by myself because my husband had to work through the weekend. This simple endeavour was met with pure shock in dozens of my peers: to think, a married woman might travel to a new place on her own. Pass the smelling salts!

At the ripe old age of 27, no single group of people has ever been so interested in my reproductive health or family planning methods -not even my grandparents- who are thirsty for grand-babies. Turns out, there’s an unspoken timeline in military marriages, and after a certain point -generated by some vague algorithm involving your age and the amount of time you’ve been married -people feel no shame in asking unsolicited questions.

I’ll also never forget how I read a three-page list of guidelines for wives of Marines attending the annual USMC birthday ball. Highlights included a friendly reminder to “remember: this is not about you,” and a subsequent series of commandments forbidding everything to include cleavage, talking before one’s servicemember, and being afraid of utensils. Bless this lady’s heart; the piece was punctuated with a reminder to “HAVE FUN!!”

I wish someone had at least forewarned me of this before I married my husband. It wouldn’t have changed a thing -I like,like like him, guys -but this retrograde aspect of the military is something that I do wish people talked about more openly. Stay tuned for the book to follow.

There are endless quirks to life on a military base. Granted, you become accustomed to the rules fairly quickly, but to an outsider, it’d be pretty easy to see why most people inside the military community refer to it as a “bubble.”

For example, when you live on a military base, gone are the days when you can roll out of your car and into the grocery store in your favourite Spongebob pajamas; there’s a dress code, ma’am, and you’ll be kicked out if you don’t stick to it. You get used to passing gas stations for tanks, helicopters passing overheard stopping your conversation in its tracks, and speed limits that seem more adequately designed for tortoises. You stand to attention (yes, even as a civilian) for colours twice a day. You notice the coded badges pinned to people’s collars, and you understand what they mean.

It’d take a real Scrooge to hate all these strange subtleties, though; it just becomes part of life that, when you’re extracted from it, is simply a little bit kooky. 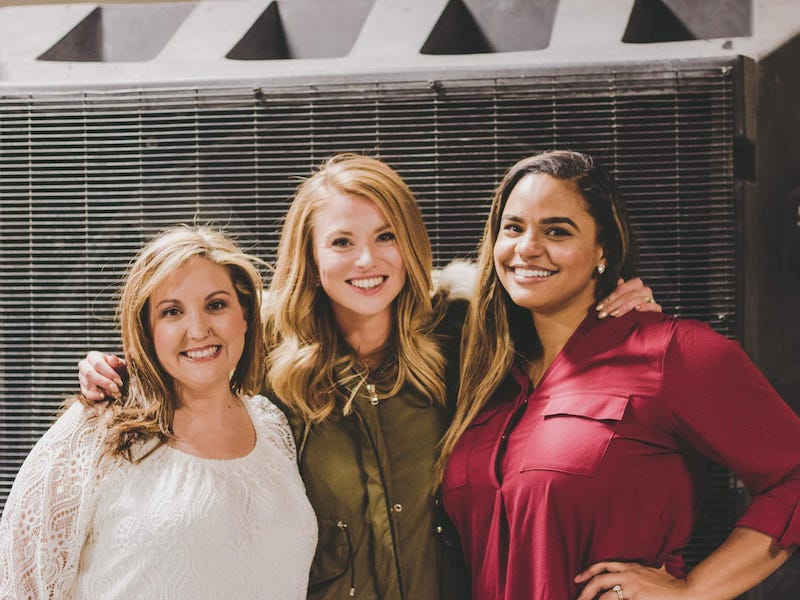 Amy BryneIt can be difficult to explain unless you’re living it.

This is a job that your spouse can’t escape from.

Now, when I come home from work, I have the luxury of becoming real-life Amy the moment I clock out. My husband? Not so much.

Service members are paid by rank, not by the total amount of hours worked (which is arguably criminal if you look at the military pay rate, especially for junior enlisted ranks). Thus, they’re never “off the clock.”

This bleeds into everyday life, even when they’re not working. They’re never not a Marine, a soldier, a sailor, or an airman.

If I could only take back the number of hours I’ve lost waiting for my husband to get his weekly haircut, I could probably take a short sabbatical with them. He shaves every morning that he has to go out in public (save for the cheeky vacation scruff of 2017, RIP). He receives work-related phone calls at all hours of the day, seven days a week. Vacations are a precarious endeavour that are dictated by ops tempo, deployments, and leave blocks -not simply a whim and accumulated hours.

Furthermore, the military life whittles at the character of the person you married. In my case, this has been all positive; my husband has truly blossomed since he became an active duty Marine, and I wouldn’t trade any of the lost hours (or facial hair) for this immaculately-sculpted person.

Regardless, cheesy stories aside, no one ever tells you that the job will mould the human you wed in ways you weren’t anticipating.

take a specific type of person to be a military spouse.

In the beginning, I naively thought that marriage would be easy (that was my first mistake).

The second, larger mistake was ardently believing that anyone could be successfully married to a service-member if they wanted to. I truly believed that grit and love were the only necessary components of a lasting military marriage.

Can I continue to do it? I’m not sure; time will tell.

What I am sure of is that military couples who manage to maintain strong, healthy relationships over long periods of time deserve unadulterated respect.

The bottom line? Military life is a life of sacrifice, however large or small, for servicemembers and their families.

Admitting this is not martyrdom, it’s an admission of truth in a world that encourages marriage without making it known that civilian wellbeing is not a priority.

Ultimately, I think if we talked about this elephant in the room, instead of laughing at it and labelling it a “dependa,” we’d see some real change in military family culture.