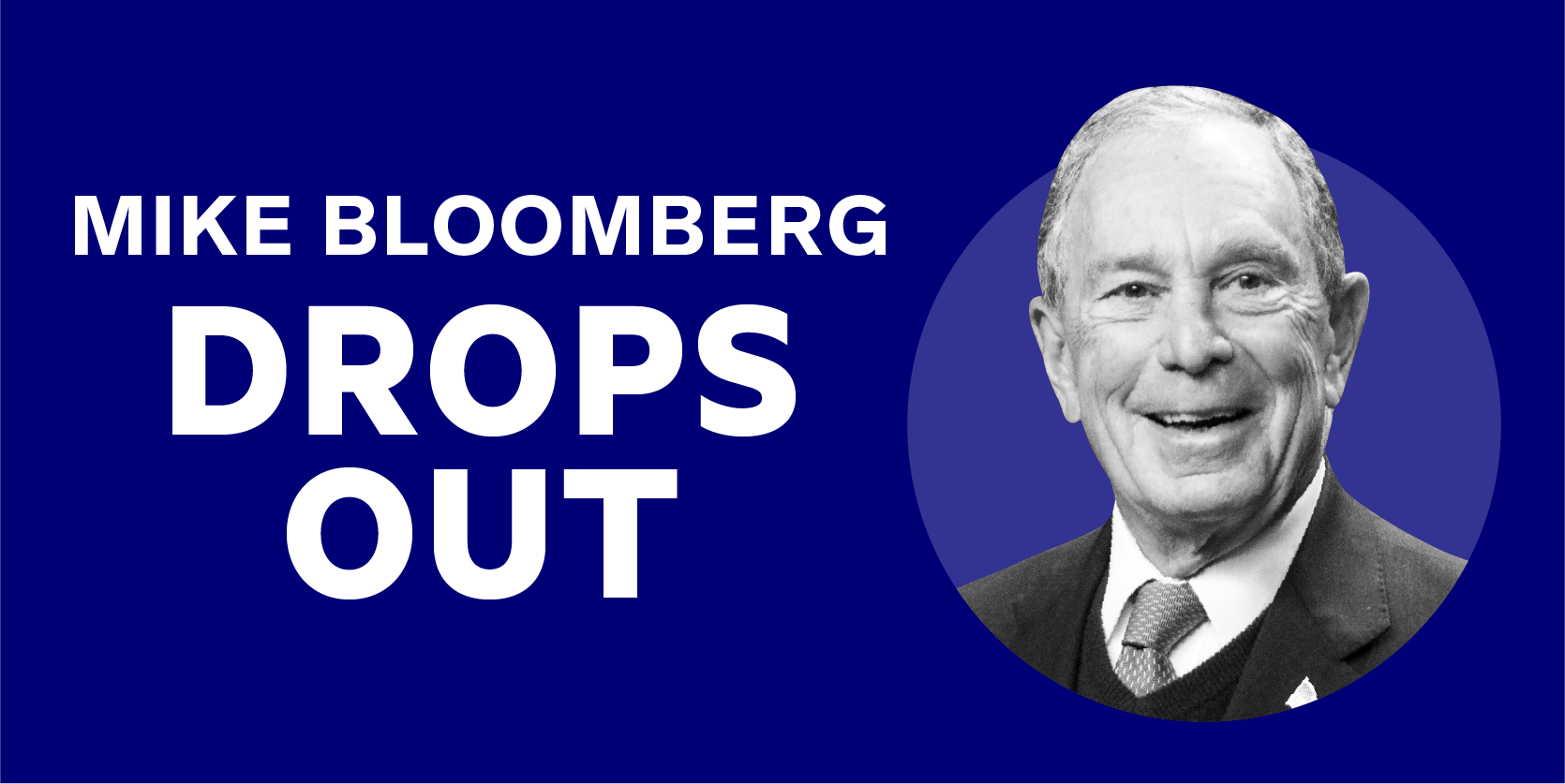 The billionaire Mike Bloomberg dropped out of the 2020 Democratic presidential race on Wednesday after a disastrous performance in Super Tuesday’s 14 Democratic primaries. He officially endorsed former Vice President Joe Biden, a fellow moderate, on his way out of the race.

“I’ve always believed that defeating Donald Trump starts with uniting behind the candidate with the best shot to do it,” Bloomberg said in his statement. “After yesterday’s vote, it is clear that candidate is my friend and a great American, Joe Biden.

“I’ve known Joe for a very long time,” he added. “I know his decency, his honesty, and his commitment to the issues that are so important to our country – including gun safety, health care, climate change, and good jobs.”

Biden won 10 Super Tuesday races, including in Texas, beating out Sen. Bernie Sanders, who won in California and three other states.

Bloomberg won a single race, in American Samoa, despite spending north of half a billion dollars on his short-lived campaign and shattering spending records in the process. He officially entered the race on November 24, nearly 11 months after some of his competitors.

Bloomberg entered at a low point for Biden’s campaign, and the former vice president went on to do poorly in the first three contests in Iowa, New Hampshire, and Nevada.

Bloomberg positioned himself as a centrist alternative to Biden and warned that nominating Sanders would spell disaster for Democrats. But he failed to gain traction in the crowded Democratic field as he weathered a string of public controversies about his behaviour toward women and past support for policies like stop-and-frisk.

He skipped the first four contests of the race, opting to pour his resources into Super Tuesday and relying on strong support in North Carolina and Virginia to stay viable.

While Bloomberg managed to grow his national support with hundreds of millions of dollars’ worth of TV, radio, and digital ads, he failed to impress many voters or pundits on the debate stage.

Bloomberg was repeatedly torn apart by his opponents, most notably Sen. Elizabeth Warren, who attacked his record of implementing the discriminatory stop-and-frisk policing policy, his behaviour toward female employees, and his reliance on his personal wealth to run for office.

Warren received an uptick in support after tearing into Bloomberg at the Democratic debate in Nevada in February, where she likened Bloomberg to the president.

“I’d like to talk about who we’re running against: a billionaire who calls women fat broads and horse-faced lesbians,” Warren said to applause. “And no, I’m not talking about Donald Trump. I’m talking about Michael Bloomberg.” 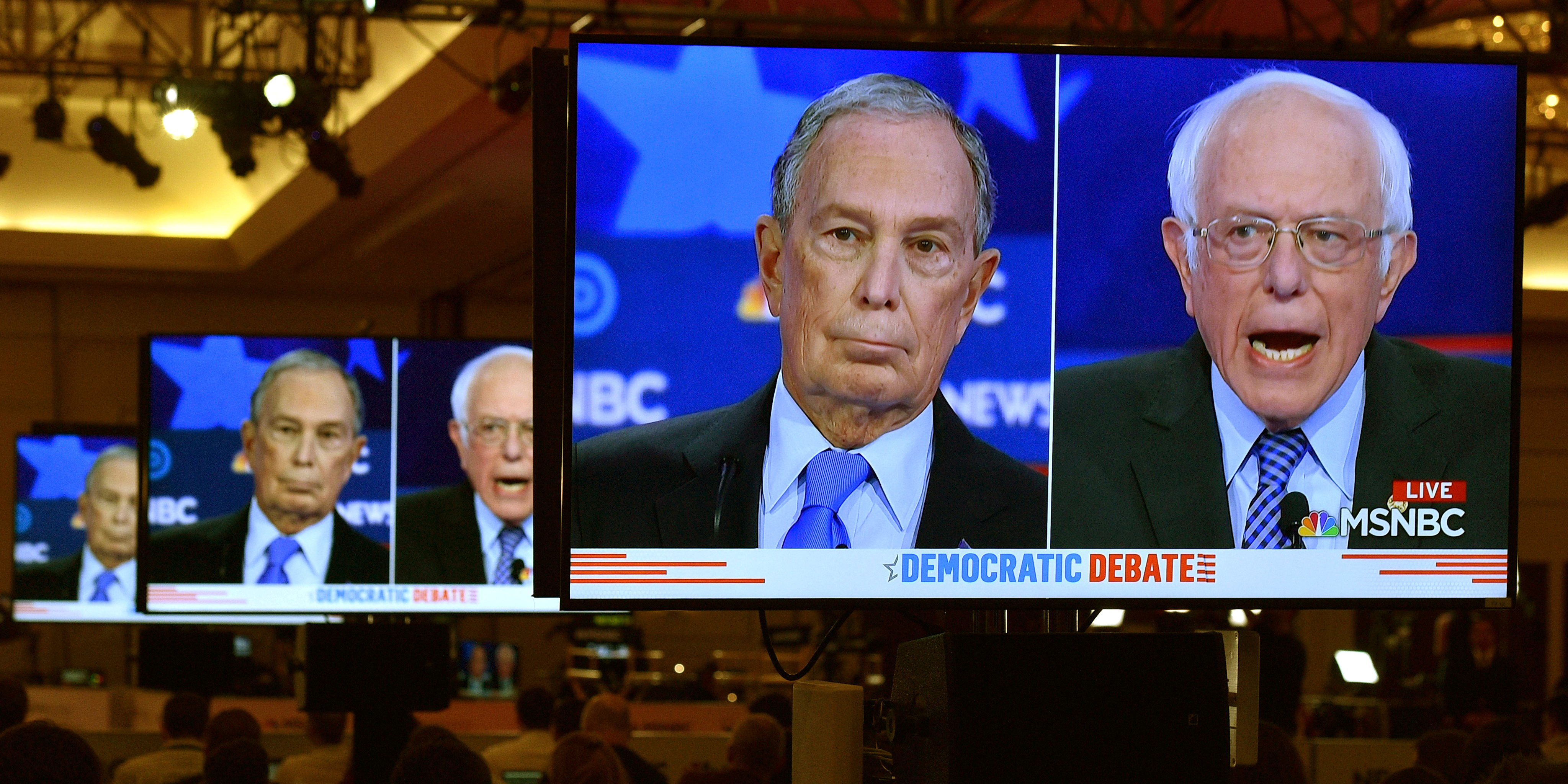 ReutersBloomberg and Sen. Bernie Sanders at the Democratic debate in Las Vegas in February.

Bloomberg, whose estimated worth is north of $US60 billion, spent over $US500 million on his presidential bid.

Bloomberg entered the race with just 5% support in national polling. But he managed to grow that number through an unprecedented advertising campaign. Bloomberg’s campaign even paid prominent meme accounts to post supportive messages on social media as a way to reach younger voters.

The former Wall Street executive managed to spend more on the first three months of his 2020 presidential campaign than former President Barack Obama did on his entire 2012 reelection bid. By early March, Bloomberg had already spent more on TV ads than Trump and Hillary Clinton did during their 2016 campaigns.

Bloomberg’s exit from the race won’t end his influence in presidential politics, as he’s one of the Democratic Party’s most prolific donors. He’s already said that he’s willing to spend at least $US1 billion of his personal fortune on his 2020 presidential bid and that he’d continue spending on the race to help the Democratic nominee if he didn’t win.

The former mayor is accustomed to spending significant sums on philanthropy and politics. In 2019, he spent $US2.8 billion on charitable donations, $US1 billion of which went to Johns Hopkins University, his alma mater. Bloomberg and his organisations spent more than $US100 million on the 2018 midterm elections.