On Monday, news broke that Microsoft is planning to end support for MS Paint later this fall.

For the first time since it was introduced 32 years ago along with Windows 1.0, the program won’t receive any future updates.

Over the last decade, Paint has come back to prominence by users who draw intentionally bad doodles on internet photos.

And while those doodles can be hilarious, that doesn’t mean Paint hasn’t been used for something much more impressive.

In fact, dozens of artists have used it to craft amazingly detailed works of art.

From celebrity portraits to beautiful skylines, here are some of the most creative paintings made in MS Paint.

Lisa Eadicicco contributed to an earlier version of this story. Hines did a series around Harry Potter, including this scene from 'Harry Potter And The Deathly Hollows.' This is the scene of Mad-Eye Moody fighting Voldemort. Here's another one from the Harry Potter series created by Pat Hines. The whole image was created in MS Paint other than the print on the gravestones, which Hines used Photoshop to slant. Here's an extremely meta painting of Microsoft founder Bill Gates through MS Paint. Hines said he uses his computer mouse for every single painting he creates. Hines says his artistic process has evolved over a period of 10 years or so. He started by just doodling with a mouse while working an overnight job. This is of the Arnold Arboretum in Boston. Hines starts out by laying down some simple shapes in MS Paint, and then colours them and enlarges the image for a higher resolution. The scene below is based on Peter's Hill in Boston. This is Hines' rendition of Lt. Dan from 'Forrest Gump' battling the sea. And here is a movie poster for the Jurassic Park series. Hal Lasko, also known as the Pixel Painter, created a bunch of beautiful MS Paint paintings starting in his mid-80s. He created images like this despite suffering an eye condition that severely limited the center of his field of vision. Lasko started out as a graphic designer, working in the military to draft maps during World War II. His family gave him a computer for his 85th birthday, which is how he got into MS Paint. Lasko passed away in 2014 at the age of 98. This fantastically detailed image of a calm river flowing through a village was created in MS Paint. A brief search on YouTube will bring up tons of impressive Microsoft Paint videos, such as this Santa Claus drawing by user Eclectic Asylum Art. 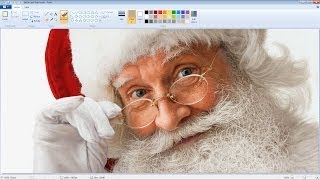 Or this recreation of the Mona Lisa made by the same user. 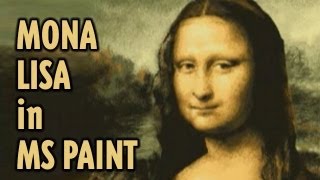 This painting of a wrestler holding up his belt was made in MS Paint by Imgur user tawaldher.

Here's another stunning image from sonofjay of Luke Skywalker. The detail is incredible.