Trump gets into another feud with a powerful woman from Michigan: Attorney General called Trump 'a petulant child' for not publicly wearing a mask during Ford factory visit 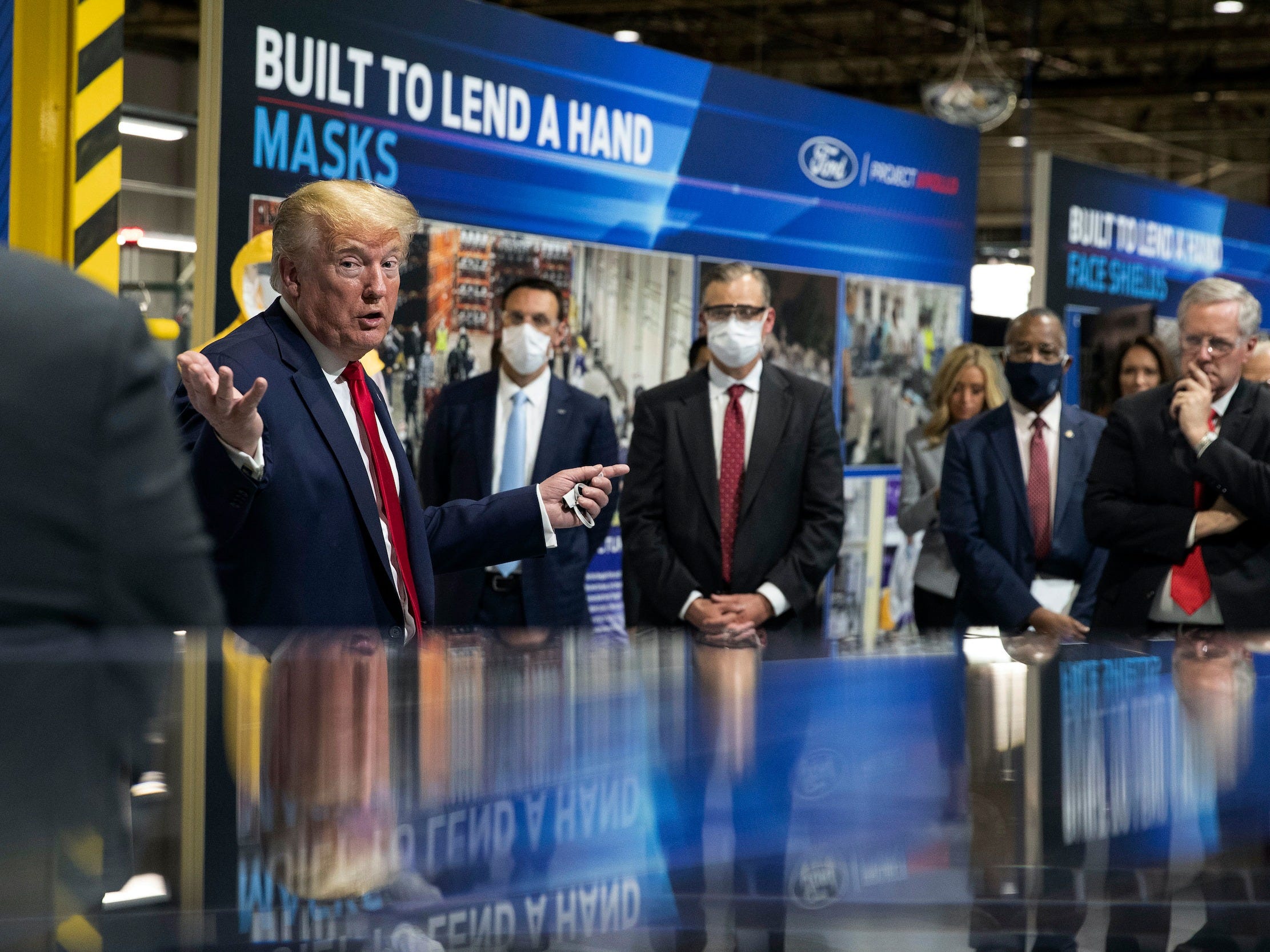 AP Photo/Alex BrandonTrump praising the Ford family’s ‘bloodlines’ is the latest in his comments about genetics and family lineage.

Michigan’s Attorney General, Dana Nessel called President Trump “a petulant child who refuses to follow the rules” after he would not publicly wear a mask during a tour of a Ford factory despite being asked to do so.

The comment came after Trump was seen publicly without a mask during a Ford factory tour in the state on Thursday, disobeying executive orders put in place by Michigan Gov. Gretchen Whitmer that require anyone to wear a facial covering when in an enclosed space.

Nessel told CNN on Friday that the president is like “a petulant child who refuses to follow the rules.”

“I was infuriated and exasperated, because I know that for every person who goes into a place of business where they’re told to wear a mask, and they see the president not wearing one, their reaction is going to be, ‘The president of the United States doesn’t have to wear one. Why should I?'” she said. “This isn’t funny, these are people’s lives.”

Do nothing A.G. of the Great State of Michigan, Dana Nessel, should not be taking her anger and stupidity out on Ford Motor – they might get upset with you and leave the state, like so many other companies have – until I came along and brought business back to Michigan. JOBS!

But Nessel fired back, tweeting that she was “impressed” he even knew her name – a reference to Trump having previously called Gov. Whitmer as “that woman from Michigan.”

Hi! ????After struggling with our Gov & SOS, impressed you know my name. Seems like you have a problem with all 3 women who run MI-as well as your ability to tell the truth. The auto industry has been thriving for years bc of our incredible auto workers & companies. #UnionStrong https://t.co/qKDINknn2O

The Attorney Generals’ comments come after the president was photographed not wearing a mask while on a public visit to a Ford manufacturing plant in Ypsilanti on Thursday. However, Trump wore a mask as he toured the plant, but chose to remove it while he was around the press.

“I did wear one. I had it on before; I wore one on in this back area,” the president said. “But I didn’t want to give the press the pleasure of seeing it.”

Before his visit, Nessel had sent Trump an open letter, where she asked him to wear a mask and warned him that he had a “legal responsibility” and a “social and moral responsibility” to take precautions to prevent further spread of the virus.

Nessel also sent a warning to Ford for allowing the president to not wear a mask in front of cameras.

Nessel told CNN: “I think that we’re going to have to have a very serious conversation with Ford in the event that they permitted the President to be in publicly enclosed places in violation of the order.”

“They knew exactly what the order was and if they permitted anyone, even the President of the United States, to defy that order, I think it has serious health consequences potentially to their workers,” she added. 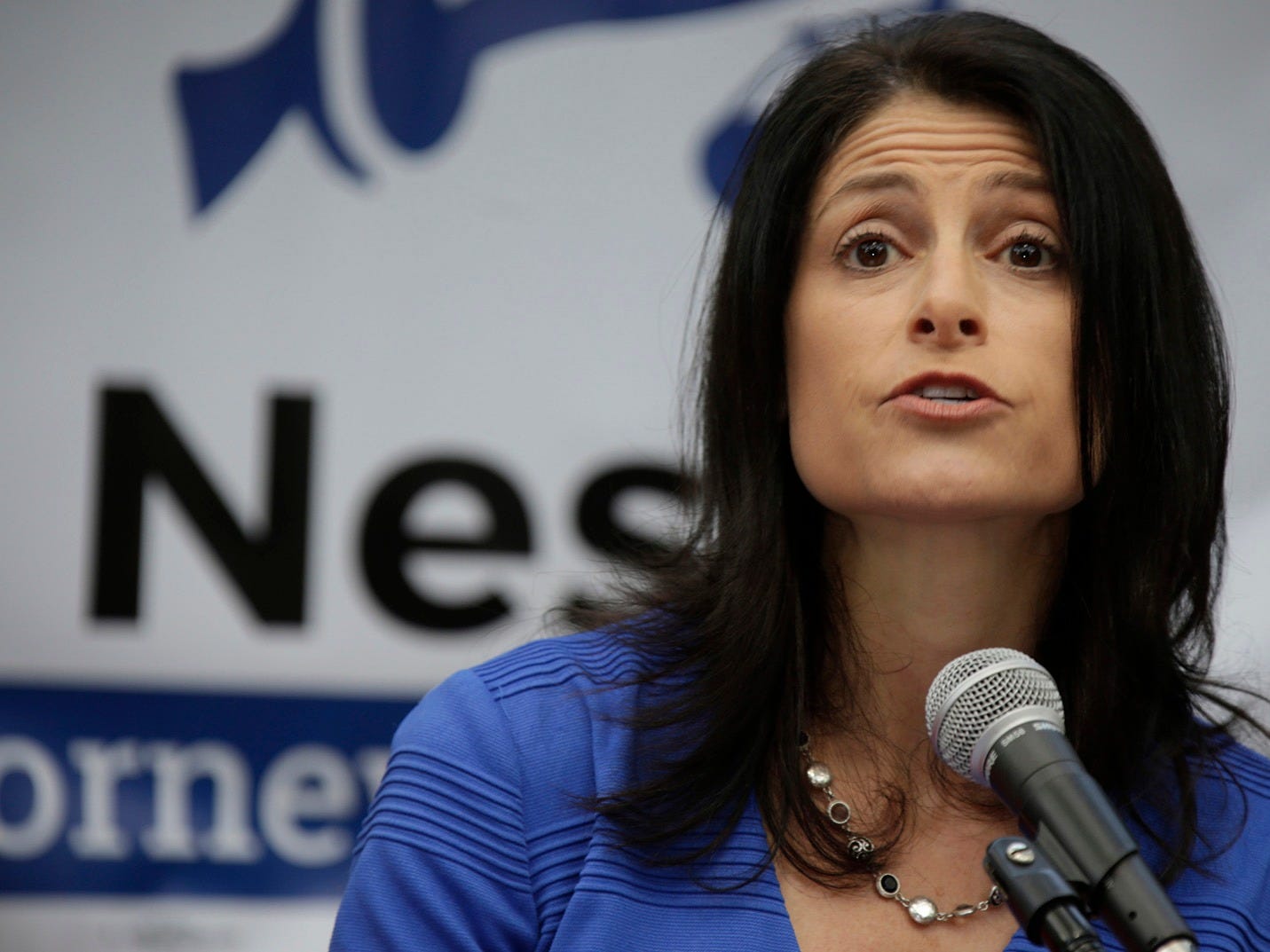 Nessel also suggested in her tweet that she believes Trump has been targeting Michigan’s leadership because the governor, secretary of state, and attorney general are all women.

“I guess if any one of us were doing Secretary [of State Mike] Pompeo’s dishes, he might be fine with us. But since we’re not and we’re actually running the state of Michigan, he seems to have a real issue,” Nessel also told NPR.

It is not the first time Trump has feuded with Michigan’s leadership. He has attacked Gov. Gretchen Whitmer on several occasions and nicknamed her “Gretchen ‘Half’ Whitmer” on Twitter.

Earlier this month, the president tweeted in support of armed protesters who stormed the state’s Capitol, demanding a suspension of its stay-at-home order.

Trump took to Twitter to address Gov. Whitmer, writing: “The Governor of Michigan should give a little, and put out the fire. These are very good people, but they are angry. They want their lives back again, safely! See them, talk to them, make a deal.”

Whitmer has since extended the stay-at-home order until June 12 but has allowed parts of the state to reopen.

Although her strict coronavirus measures have sparked high-profile protests, polling has found that Michiganders are largely supportive of their governor and her administration’s handling of the crisis.

Earlier this week, the president was angrily tweeting again about Michigan after Jocelyn Benson, the secretary of state, announced that, due to the COVID-19 pandemic, all of the state’s 7.7 million registered voters would be sent an application to vote by mail in the August and November elections.

Trump responded by threatening to pull federal funding and made the unsupported claim that widespread voting by mail promotes “a lot of illegality.” He called Benson a “rogue Secretary of State. I will ask to hold up funding to Michigan if they want to go down this Voter Fraud path!”

Michigan is a key swing state in the 2020 presidential election in November. Trump trails the Democratic nominee Joe Biden, 51% to 45%, in the state, according to the survey by Public Policy Polling.