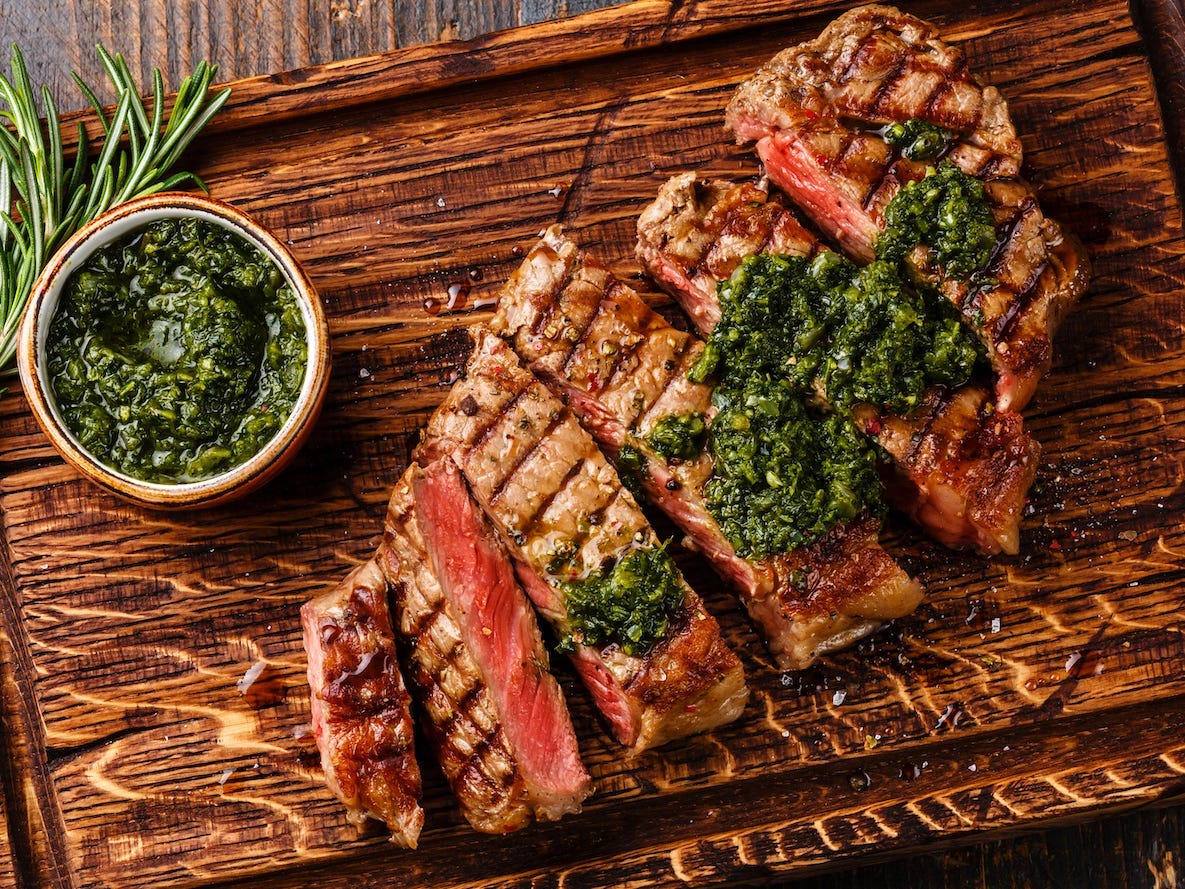 Labour Day is upon us, and you know what that means. It’s time to fire up the grill.

If you’re searching for something new to whip up on the barbecue, look no further. We asked Michelin-starred chefs to share their favourite grilling recipes for the end of summer, and provide tips and tricks so you can re-create the dishes at home.

From steak with chimichurri sauce to panzanella salad (yes, we have veggies too), there’s a grilling recipe on here for everyone. 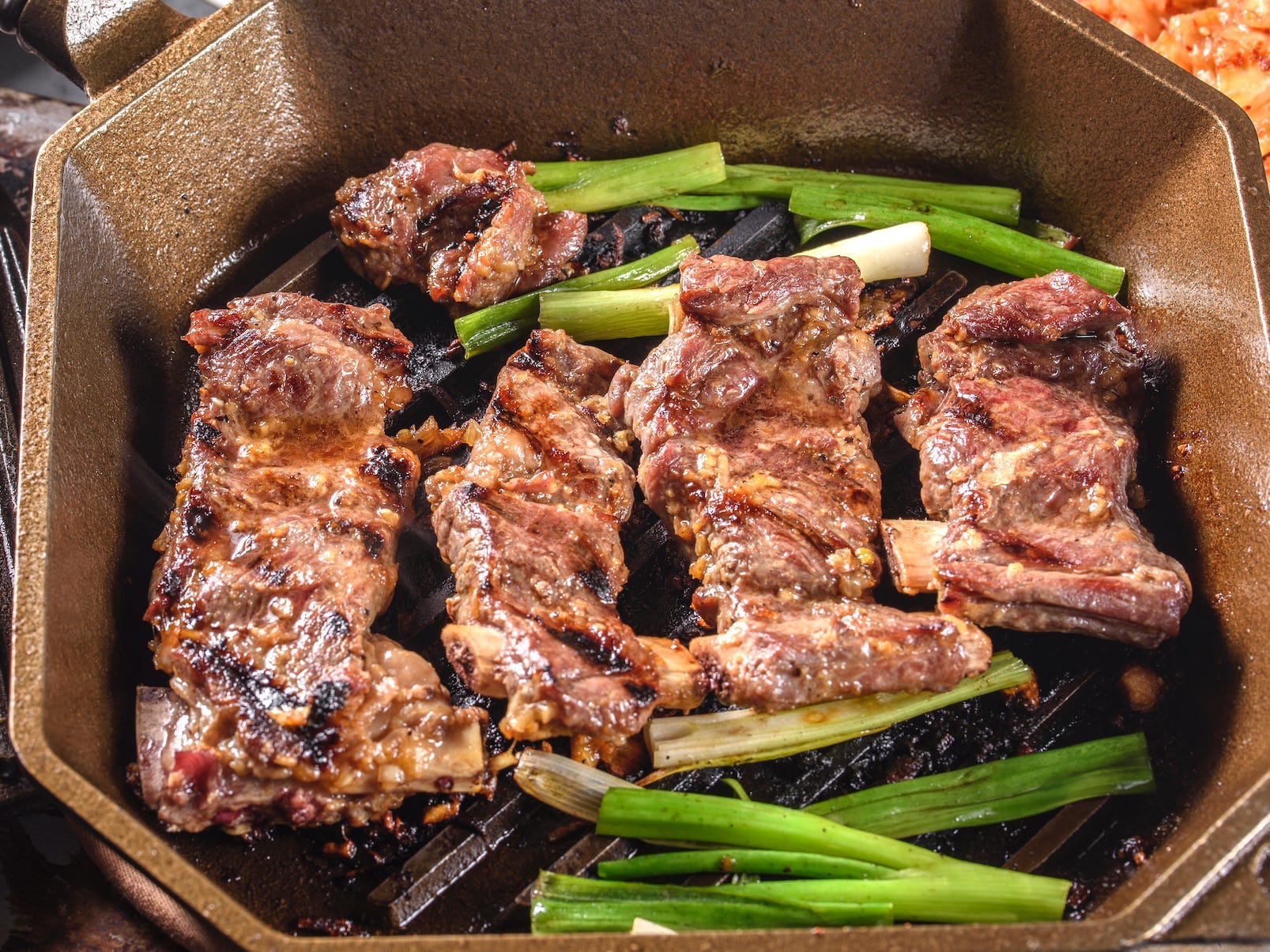 4kodiak/Getty ImagesShim loves whipping up a galbi marinade for his short ribs.

“Every time you grill, I think having a marinated option always draws attention,” Shim, the head chef at Manhattan restaurant Cote, told Insider. “People are drawn by the smell of the sauce being caramelised, and you can be the spotlight of your party.”

Shim often uses his marinade for short ribs, but said the recipe also works with chicken, pork ribs, and different cuts of beef.

Marinate your protein in the mix overnight, then just throw it on the grill.

Steaks and burgers are standard barbecue fare, but Srijith Gopinathan says you shouldn’t be afraid to throw lamb on the grill. 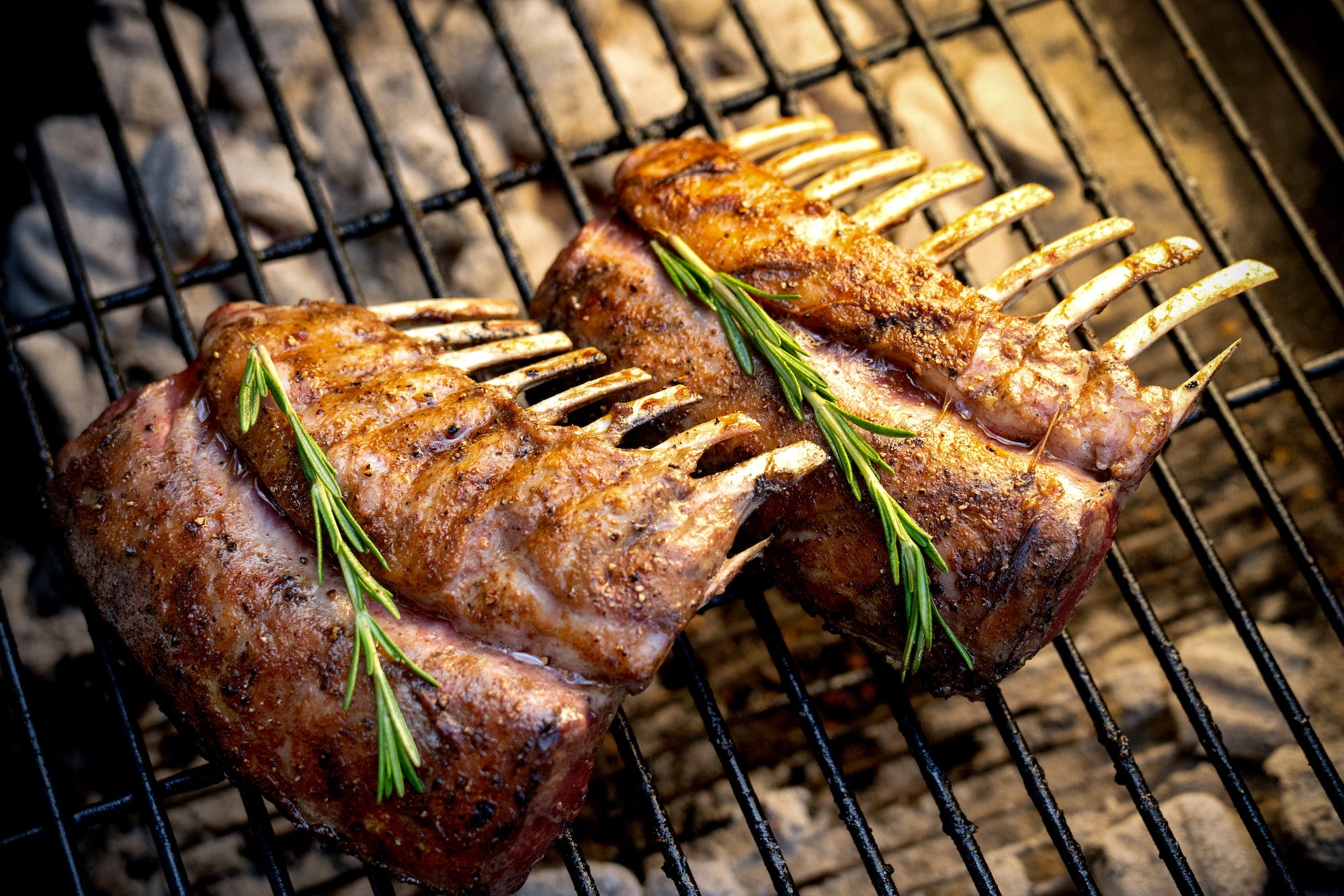 Gopinathan, the executive chef at Taj Campton Place Restaurant in San Francisco, told Insider that he prefers lamb on the grill.

“I love lamb, especially during the spring and summer,” he said.

Gopinathan recommends grilling either a rack of lamb or loin chops, and keeping the marinade simple to really let the meat shine.

“Lamb right now is really good,” he said. “You don’t want to mask it with too much of anything.”

Gopinathan suggests making a paste with ginger, garlic, mint, lemon juice, and olive oil. Coat the lamb with the marinade and let it sit for half an hour.

“Then, right before grilling, I would just sprinkle some crushed cumin and fennel together,” he said. “I would also add a tiny bit of cornstarch so that the marinade sticks to the lamb on the grill.”

“Finish up with some olive oil and maybe a squeeze of lemon,” Gopinathan added. “You can have it with spiced rice, biryani, risotto – or anything for that matter!” 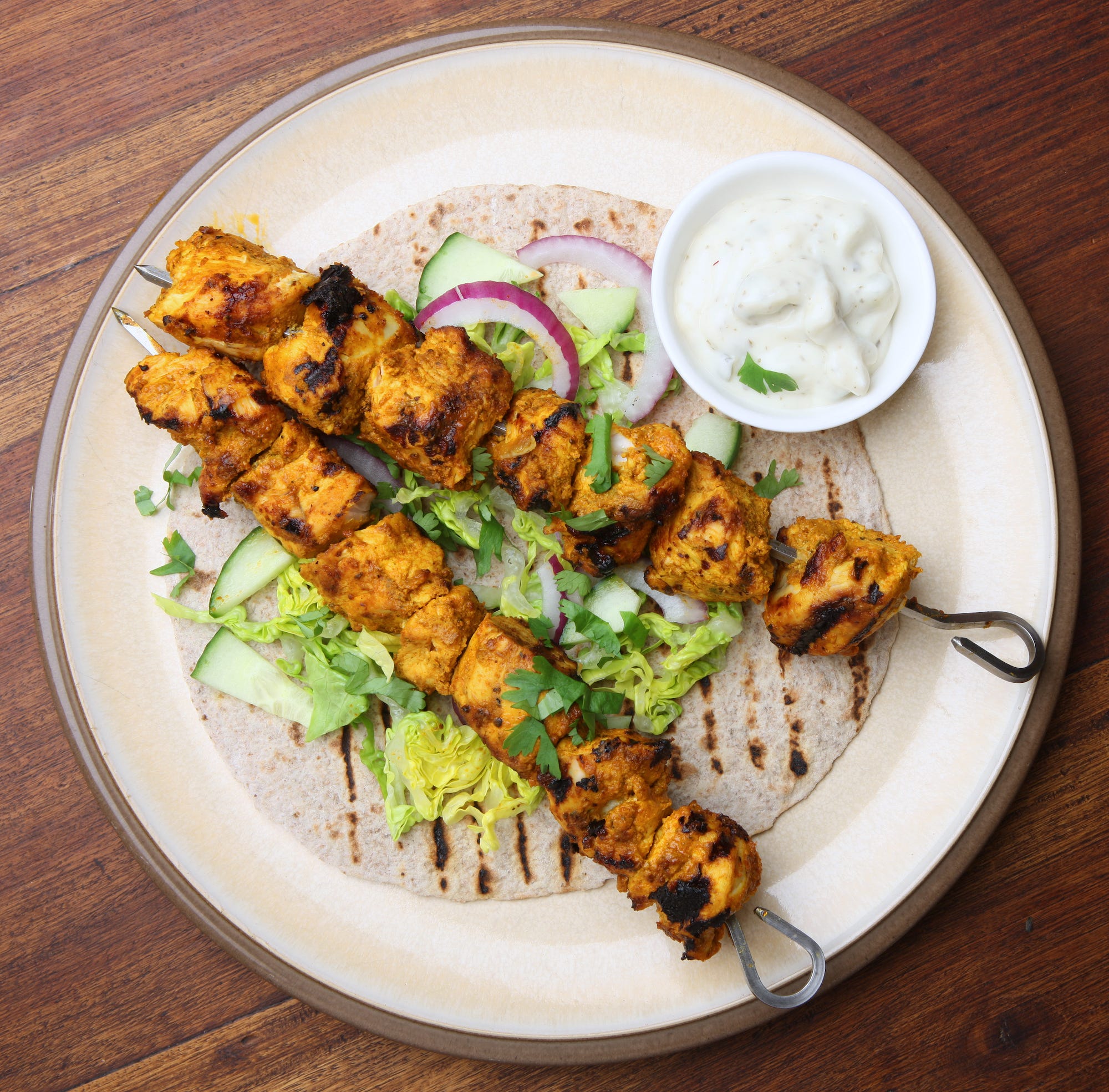 Joe Gough/Getty ImagesMarinate your chicken kebabs in a ginger and garlic paste for more flavour.

Gopinathan uses chicken thighs and marinates them in a ginger and garlic paste with some olive oil, salt, and lemon juice for half an hour. He then covers the thighs in a separate marinade with garam masala, chilli powder, coriander powder, cumin powder, and yogurt.

“Add a bit of cornstarch to the mix so it holds up, and marinate the thigh meat for one hour,” he advised.

Then, just skewer the meat on a long rod and throw it on the grill with a sprinkle of chaat masala.

If a steak dinner is what you’re after, pair it with a homemade chimichurri sauce to give it some flair. 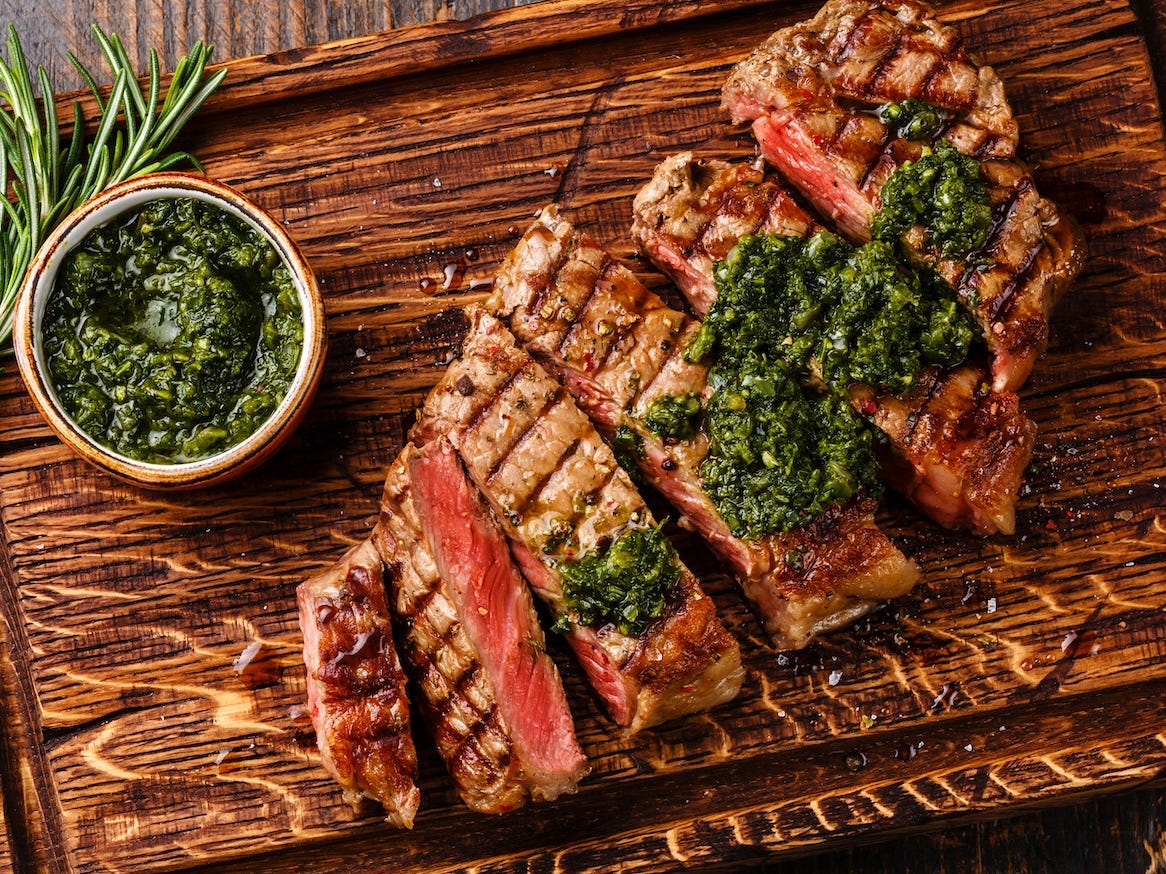 Val Cantu, the head chef at Californios in San Francisco, told Insider that chimichurri is one of his favourite “easy and super fast condiments” for steak.

“I’ll do parsley, cilantro, serrano peppers, and shallots with red wine vinegar or sherry vinegar,” Cantu said. “And mix it with olive oil, salt, probably the zest of one lemon, and then the juice of that same lemon.”

To make the perfect steak, Cantu recommends using a grill basket and putting it right on the coals to cook your protein.

“Cook the steak on one side for 10 seconds, flip it, and then do that for all the sides,” he said. “Let it rest for a couple of minutes while you relax, then do that same process again. The second sear will start to caramelize it.”

Once you’ve done all the sides for a second time, let your steak rest again and brush it with some soy sauce. Repeat the process one more time for a “perfect medium rare,” or two more times if you prefer your steak medium.

“In this final sear, you’re looking for caramelization,” Cantu said. “The soy sauce will help, and leave it nice and salty.”

Who said the grill is just for meat? California chef Alex Hong is all about fruit and veggies. 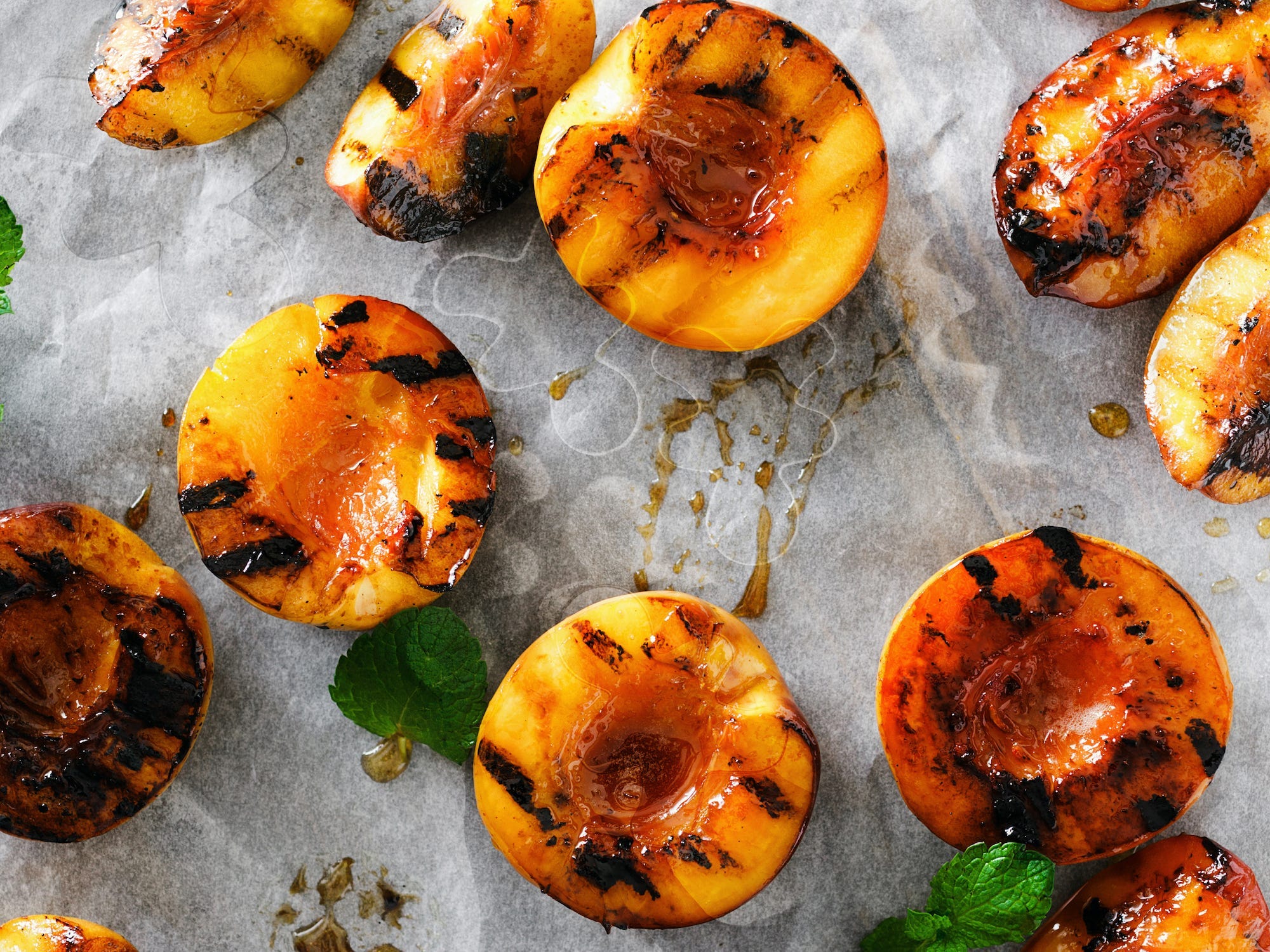 KucherAV/Getty ImagesIf you want to throw some fruit on the grill, Hong says you can’t go wrong with peaches.

“My favourite thing when I’m surrounded by family, friends, and a grill is to go to the farmers market and get as many vegetables and fruits as possible,” Hong, who is currently hosting virtual cooking classes with CocuSocial, told Insider.

“Get a great char, and maybe season them with good olive oil, a little salt, lemon juice, and a little chilli flake,” he said. “Keep it Tuscan.”

Hong believes you can’t go wrong with peaches on the grill.

“Grilled peaches with a chimichurri sauce or something like that is super yummy,” he added. 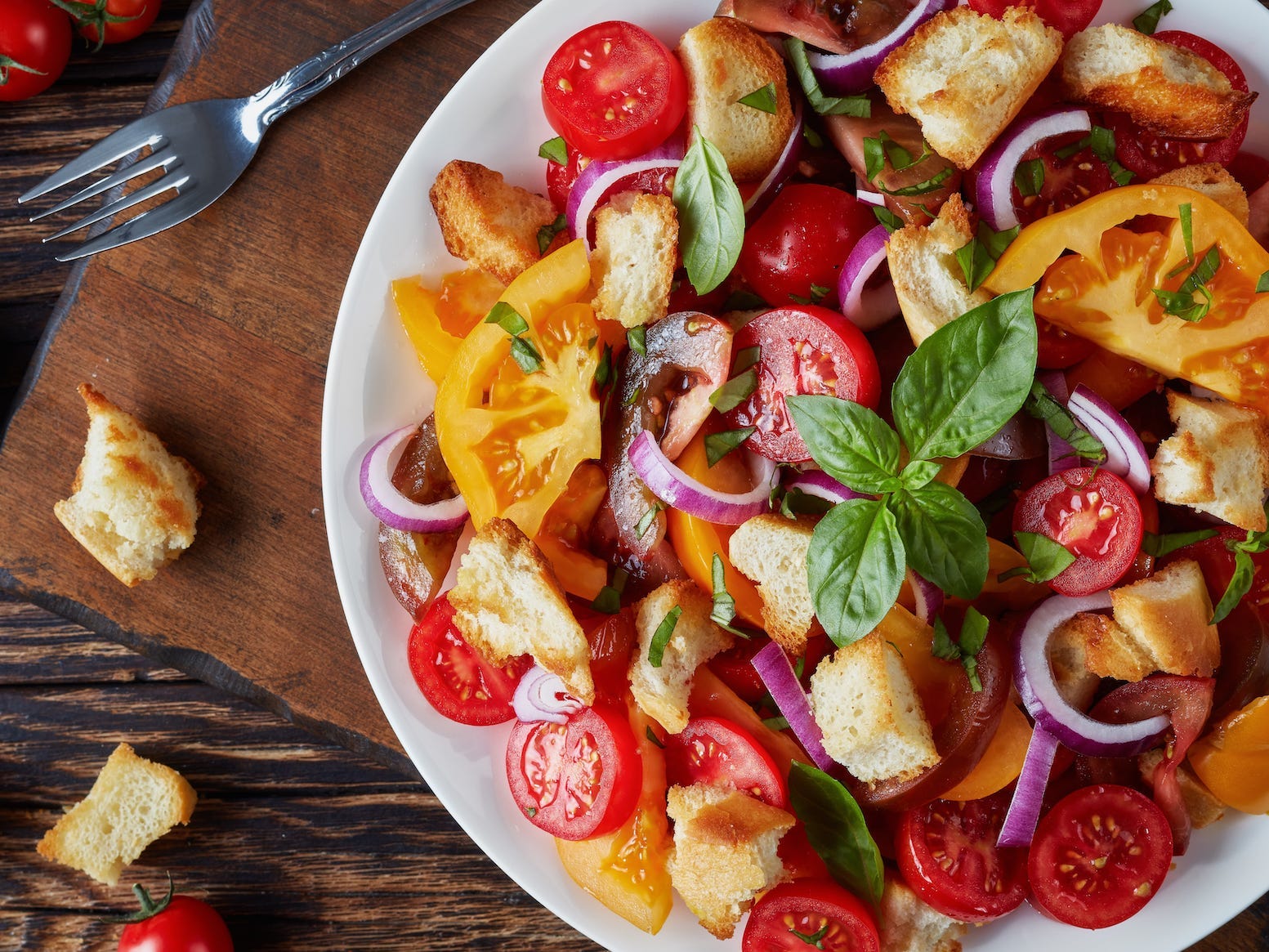 From_my_point_of_view/Getty ImagesGrill some zucchini and onions to throw into your panzanella salad.

“My favourite thing during Labour Day is the end-of-summer tomatoes,” Kleinhander, who is also hosting virtual classes with CocuSocial, told Insider. “That, to me, is the perfect summer grilling dish.”

Kleinhander, who is the executive pastry chef at Aureole, adds tomatoes, corn, zucchini, onions, and cucumbers to his panzanella salad.

“I always do it with grilled zucchini and grilled onions to caramelize the flavour,” he said.

And don’t forget to grill the bread.

“All those juices from the tomato, soaked in with the crunchy bread is heaven on earth,” Kleinhander added.