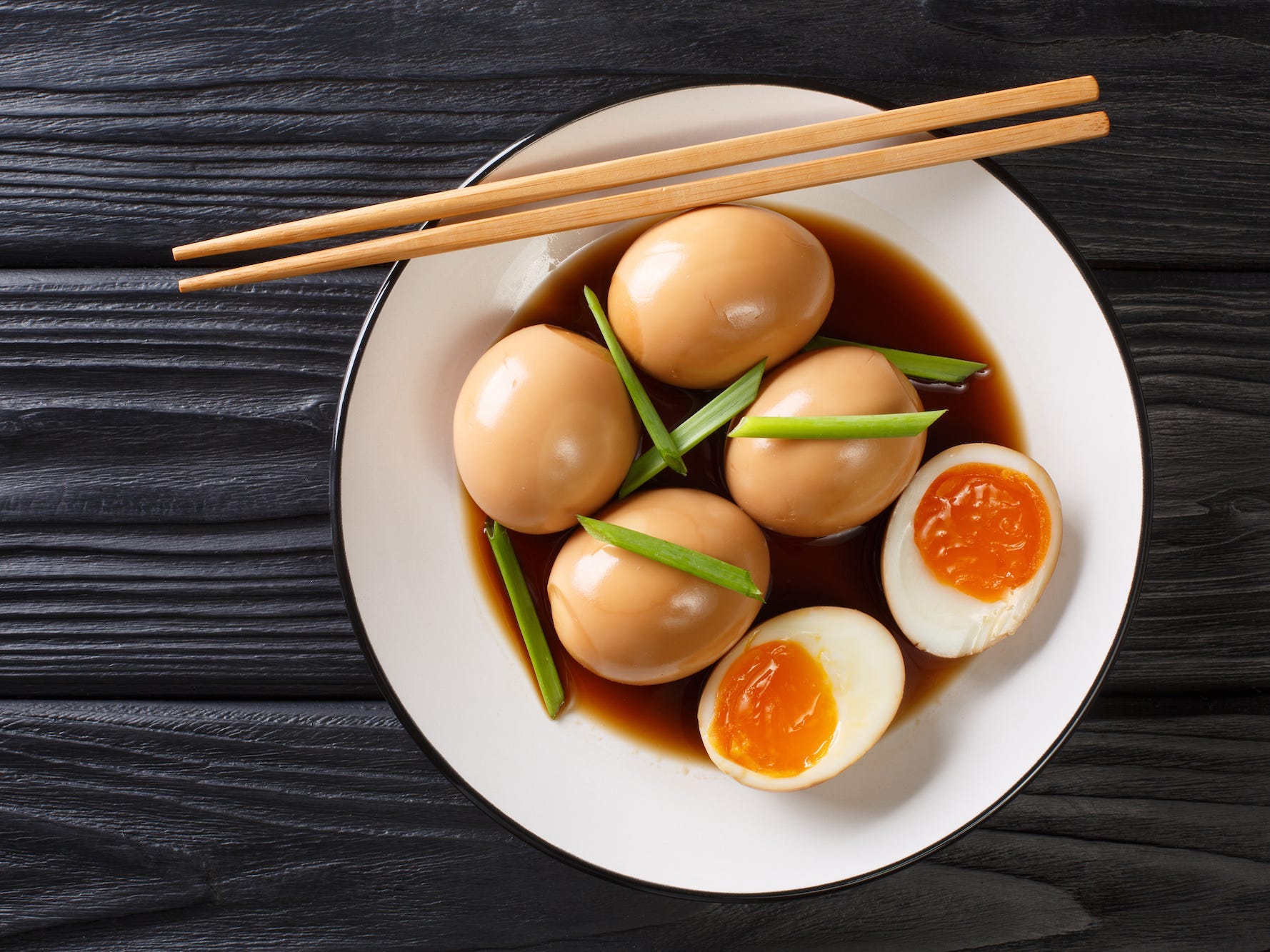 Whether you fry them in olive oil like Chrissy Teigen or whip them up in a cappuccino machine Ã la Martha Stewart, there are hundreds of ways to take your eggs to the next level.

To learn how the pros do it, we asked Michelin-starred chefs to share the egg recipes that they can’t live without, along with tips and tricks so you can make their favourite dishes as well.

From savoury soy sauce eggs to a fluffy Baked Alaska, there’s a dish on here for every meal.

Start your day off by whipping up some scrambled eggs in a tortilla. 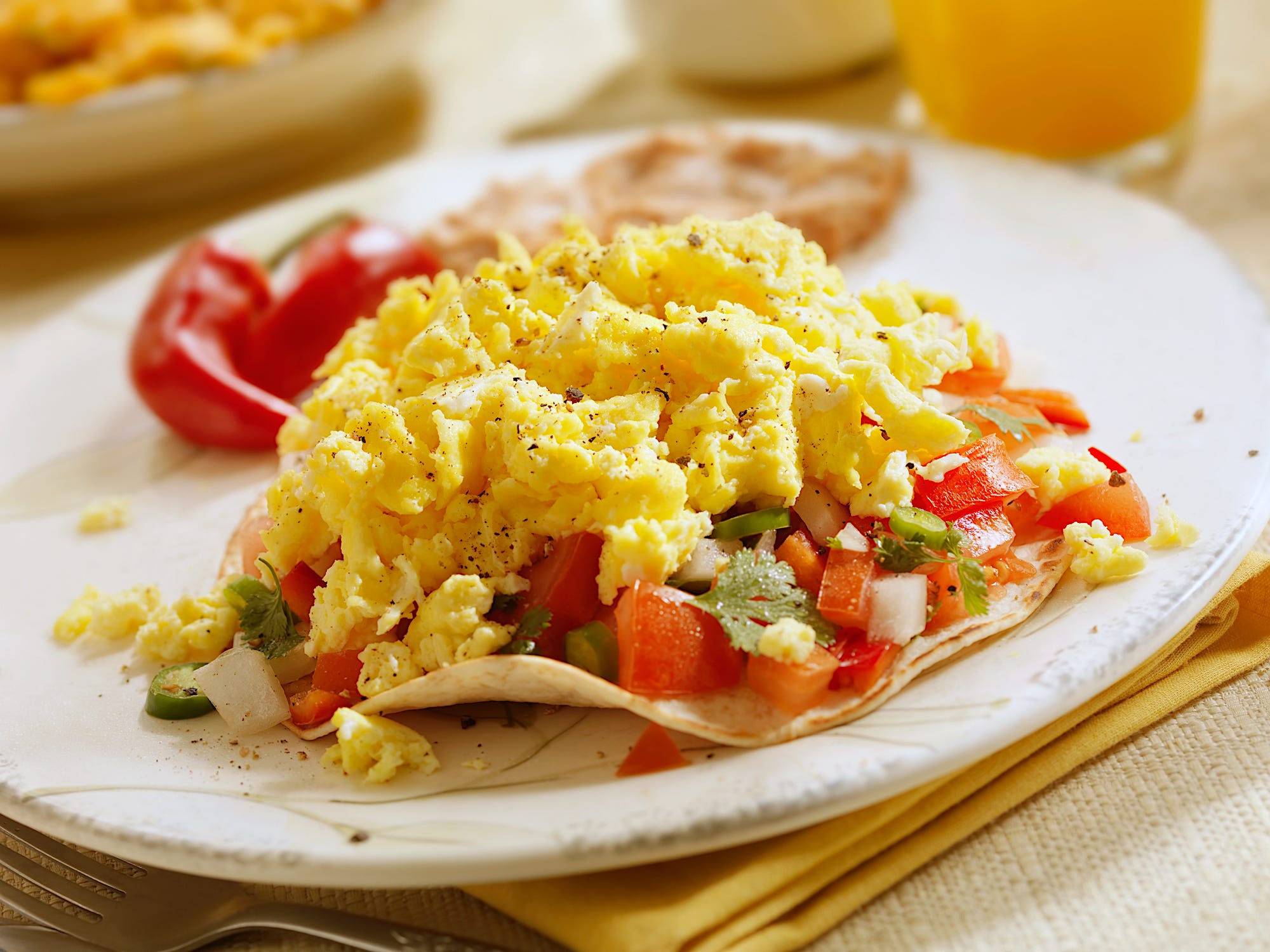 Val Cantu, the head chef at Californios in San Francisco, told Insider that scrambled eggs in a tortilla with cheese is his favourite way to eat eggs.

To make the perfect scramble, Cantu always whisks his eggs with some salt and a “big scoop of crème fraîche.”

Cantu melts butter in a nonstick pan on medium heat, letting the foam “dissipate” before he throws in the egg mixture.

“I let that bottom layer of egg set in the pan, and then start moving it around with a rubber spatula so that the layer isn’t overcooking,” he said.

Cantu then turns the heat down to low and continues moving the mixture around.

“I let the curds cook very slowly and gently as they begin to set on that bottom layer,” he said. “I like big, fluffy curds with my scrambled eggs.”

Or add a variety of veggies and spices to turn your scramble into a delicious egg bhurji. 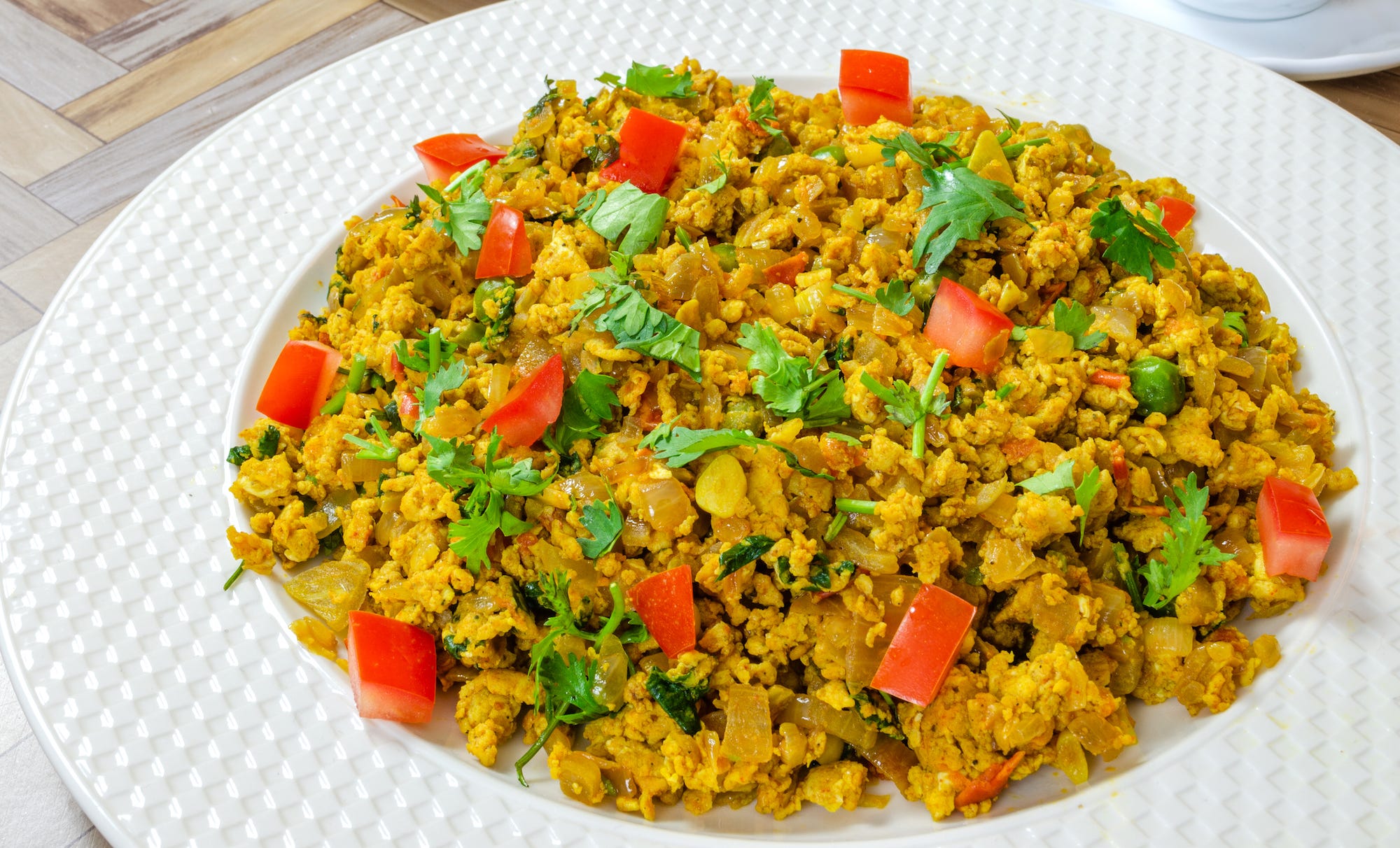 “I add squash, avocado, tomatoes, radishes, boiled potatoes, and scramble them all up together with the eggs,” Gopinathan said.

The chef recommends topping off the dish with “fresh cilantro, green chillis, and a pinch of turmeric.”

A soy sauce marinade can turn your boiled eggs into a delicious, savoury snack. 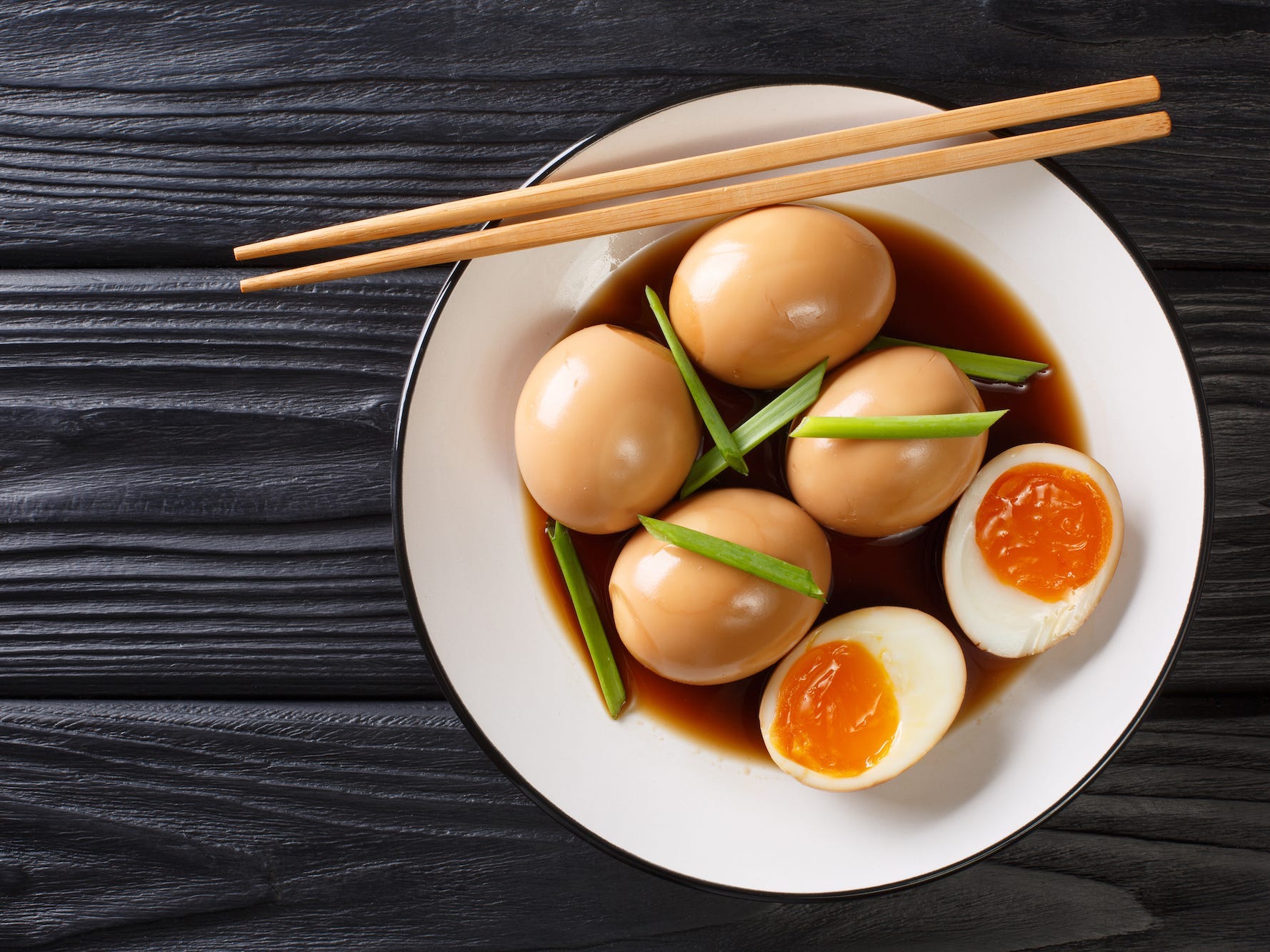 ALLEKO/Getty ImagesBoiled eggs can last in the fridge for up to five days in this soy sauce marinade.

Junghyun Park, the chef behind Atomix and Atoboy in New York City, told Insider that he often makes this marinade for a big batch of boiled eggs, which can last in the fridge for up to five days.

“The recipe is great for a home cook of all levels, and of all family sizes,” he said.

First, you’ll need to boil the eggs. Park recommends cooking the eggs for six-and-a-half minutes, then transferring them to an ice bath.

Cut the scallions, napa cabbage, and Korean radish into two-inch pieces. Then combine them with the rest of the ingredients in a pot and bring it to a boil over low heat for 30 minutes.

“Once finished, let the marinade cool down to a lukewarm temperature,” Park said. “Strain it over the peeled eggs until they’re submerged, and refrigerate for 48 hours.”

A perfectly poached egg can take your avocado toast or eggs Benedict to the next level. 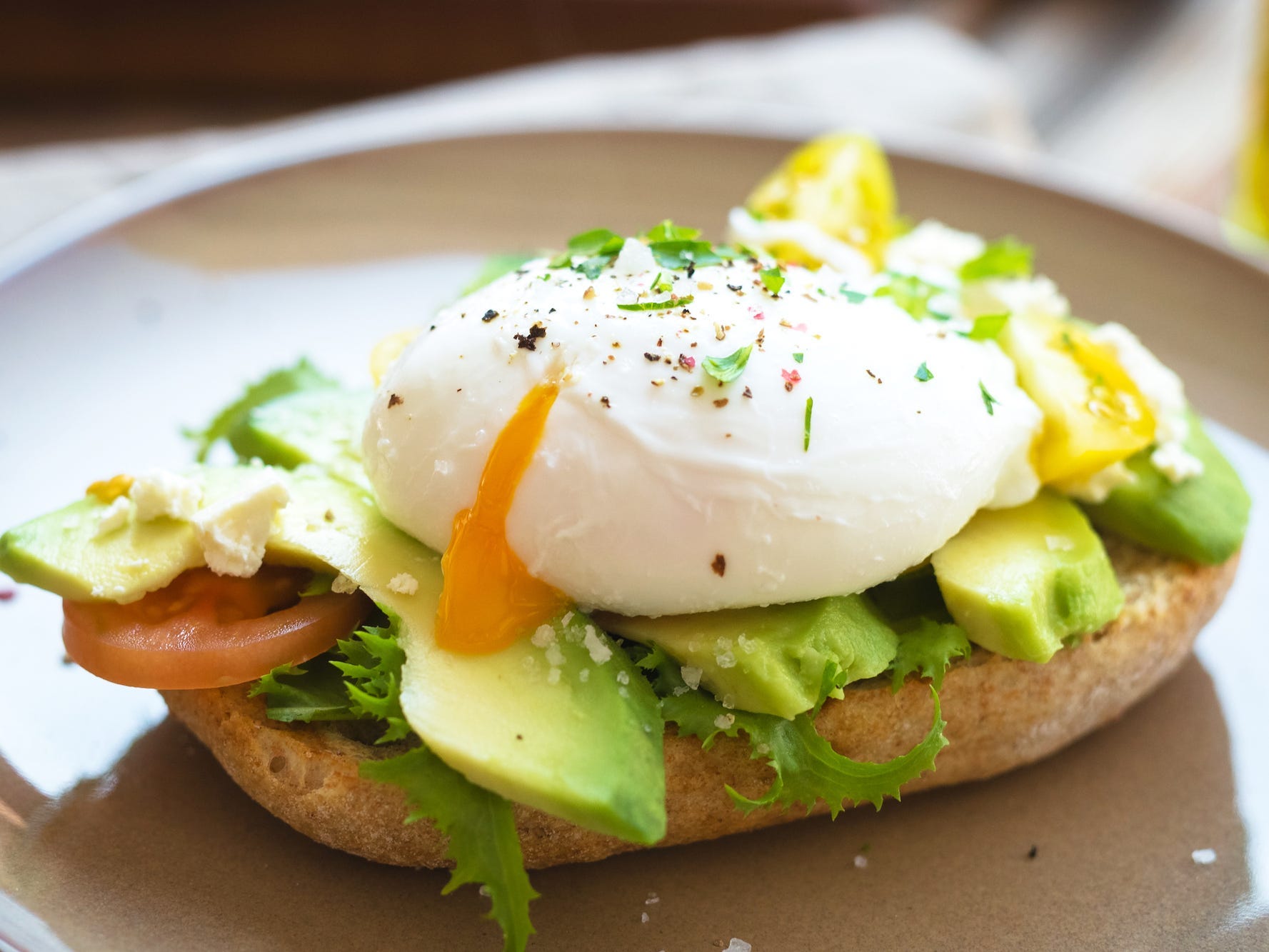 When it comes to his favourite egg recipe, Chef Paul Liebrandt – who is hosting virtual cooking classes with CocuSocial – told Insider that nothing beats a great poached egg.

While poaching eggs may seem daunting to a novice chef, Liebrandt has some tips to help you master the skill.

“The quality of your egg is important,” he said. “You want to make sure you have a really fresh egg.”

You should also add some lemon juice or white vinegar to the water when you’re poaching your egg.

“This helps to make sure the white of the egg stays in a nice, firm, round shape,” Liebrandt said. “You’ll get a really nice and evenly cooked poached egg.”

“I like it with a little salt and pepper,” he added. “Serve them with some toast, salted butter, and that’s it – very simple.”

And you can never go wrong with a classic French omelette. 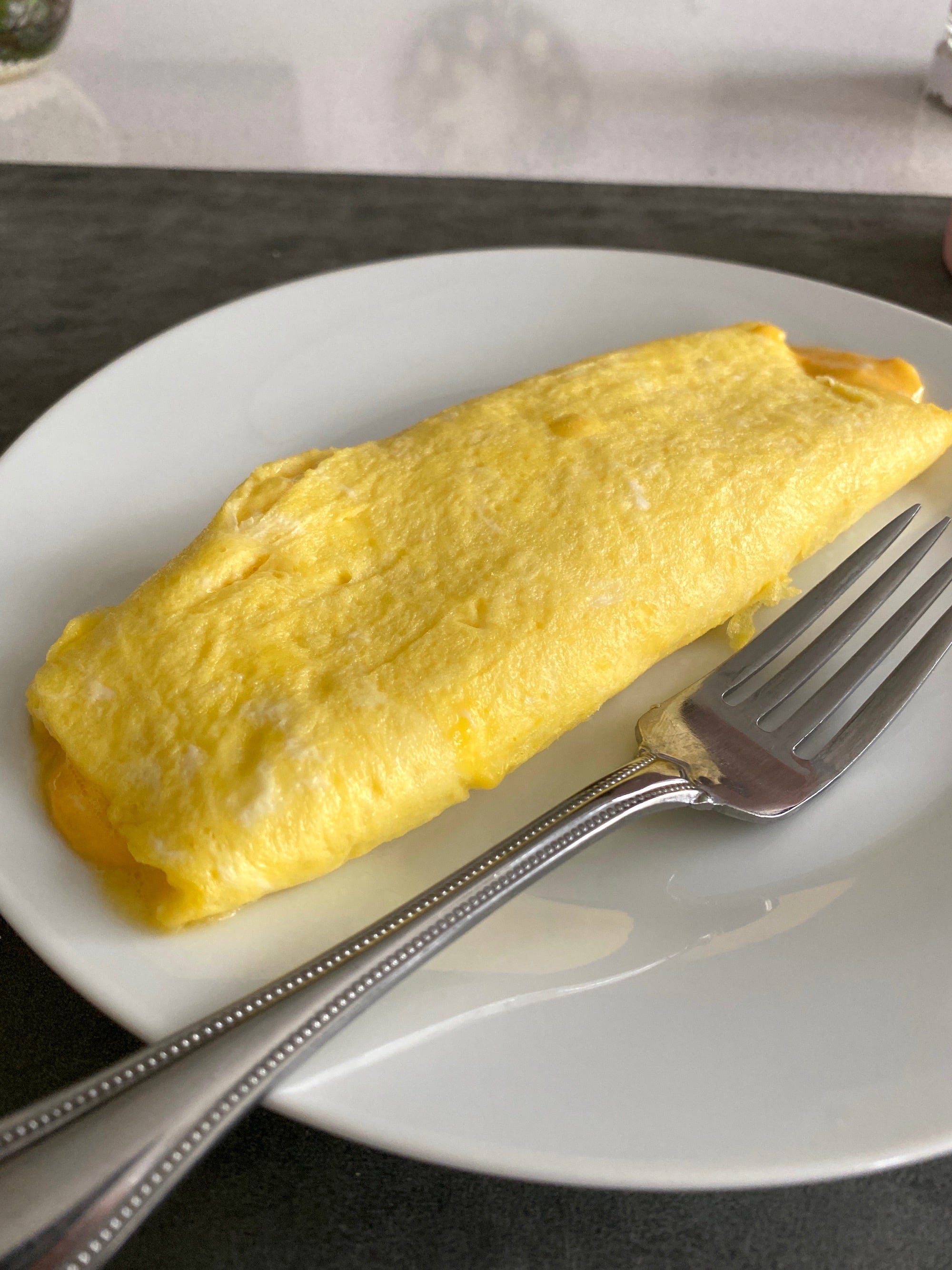 Ryan RatinoChef Ryan Ratino snapped this photo of one of his recent French omelettes.

Ryan Ratino, the chef behind Bresca in Washington, DC, told Insider that he often turns to omelettes for breakfast.

“As often as I can, I like to cook omelettes for the simple reason that I absolutely love eggs,” he said. “A true and classic French omelette is incredibly simple, you just need eggs and good butter.”

“It’s a simple combination that yields a subtle and nice tender texture, and rich comforting flavour.”

Ratino also recommends making scrambled eggs and toast with Kerrygold butter, a European-style butter that he loves pairing with eggs.

“It has much more butterfat content than regular butter, which makes dishes have a richer flavour and creamier texture,” he said. “Then top the eggs with your favourite sweet jam for a sweet and savoury contrast, and bundle it up between two pieces of toast!”

Or throw in a rainbow of veggies — and plenty of cheese — to turn your eggs into a comforting quiche. 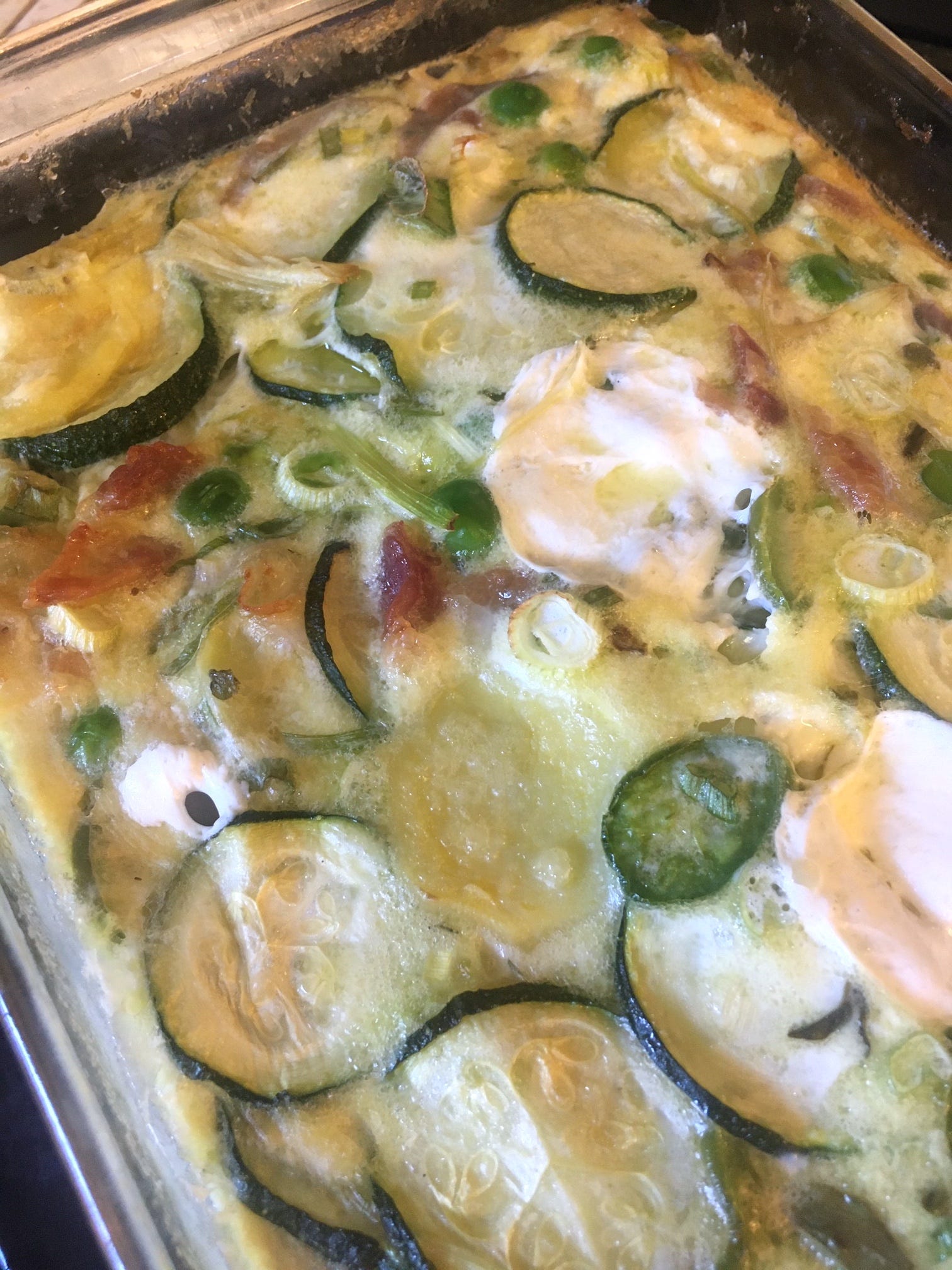 Suzette Gresham, who runs Acquerello in San Francisco, told Insider that she loves this crustless quiche – which was partially inspired by the Spanish omelette (also known as tortilla de patatas).

Gresham’s simple dish is made with zucchini coins, jalapeño peppers, fresh mozzarella ciliegine, and slices of green onion – all bound with eggs.

Looking for another healthy egg dish? Whip up tomato eggs. 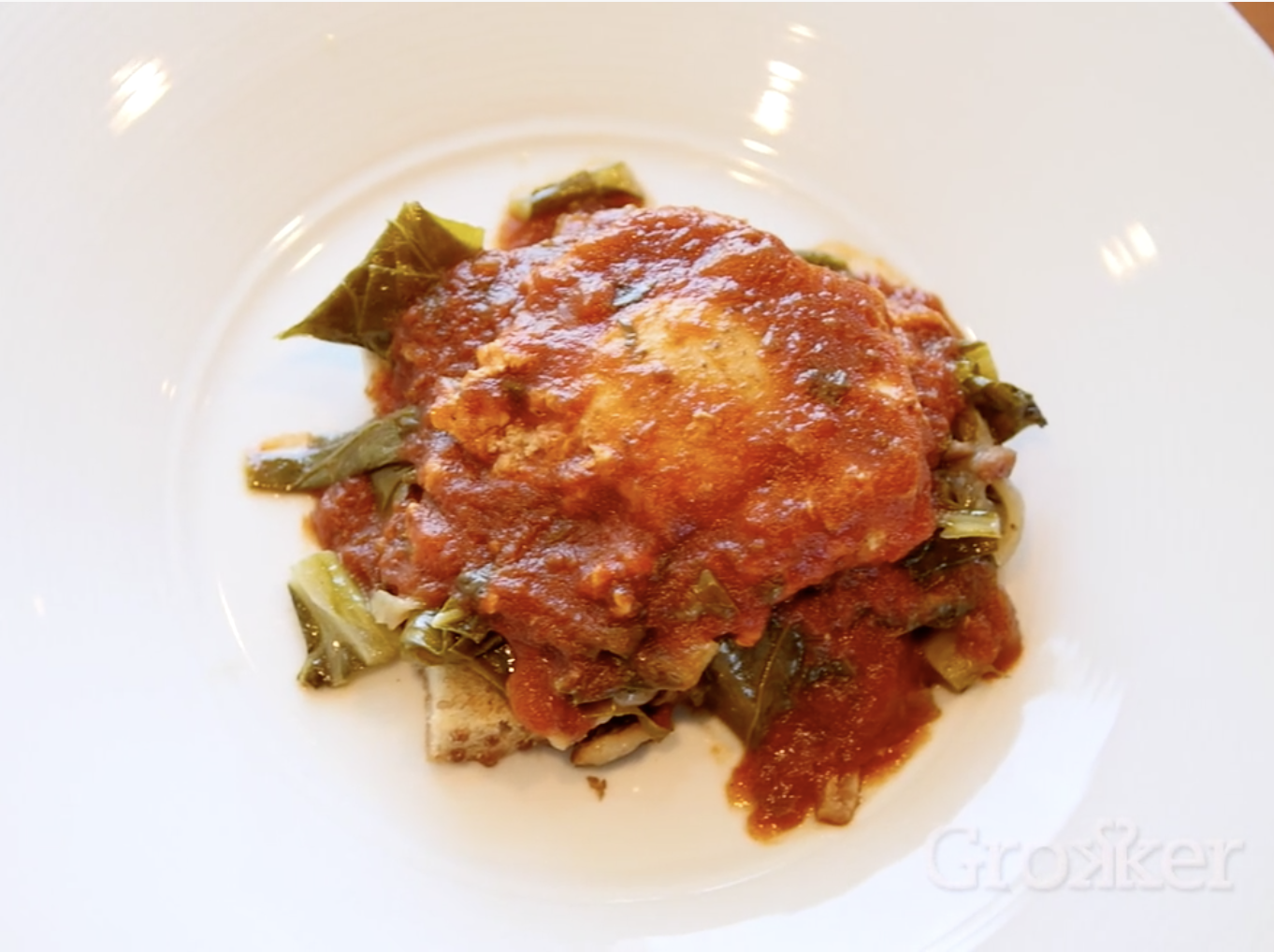 Sauté the garlic and olive oil before adding the tomato sauce, then cook the eggs in the simmering sauce.

If you like your yolk runny, Gresham recommends leaving the pan uncovered. Cook until the white of the eggs are set and the yolks are to your preference.

Gresham recommends serving the eggs on toasted sourdough bread, and spooning some of that extra tomato sauce right on top of them.

Eggs are also essential for many desserts, including a fluffy Baked Alaska. 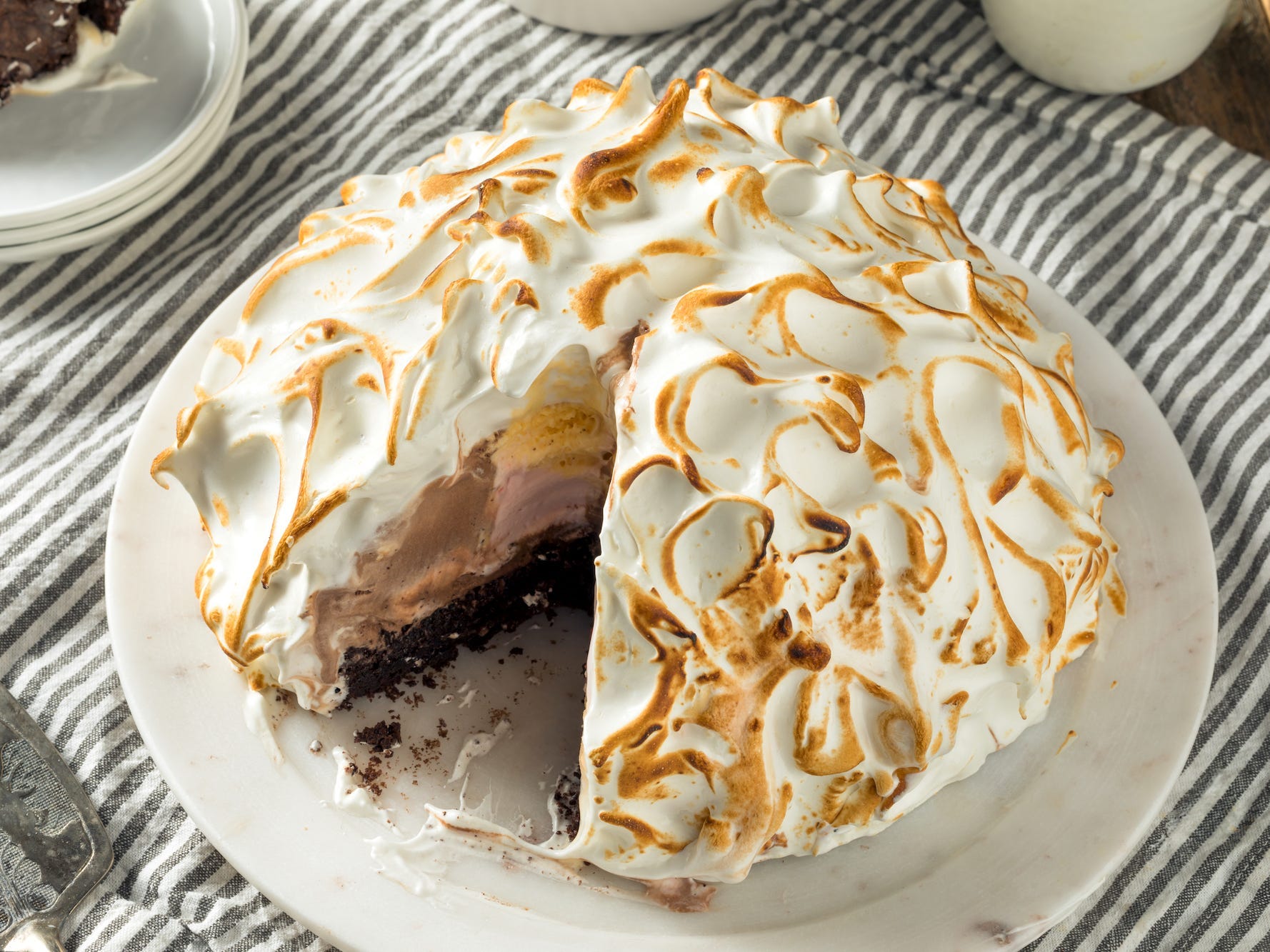 Pastry chef Dan Kleinhander, who is also teaching classes on CocuSocial, told Insider that the Baked Alaska is one of his favourite desserts to make with eggs.

The key to a great Baked Alaska, Kleinhander said, is always in the meringue. Whipping your egg whites while they’re still cold will get you the best texture for the cake topping.

“You’ll get a really glossy, stiff, and shiny meringue that holds up well to the temperature difference when you torch it with alcohol,” he added. “You get that gooey marshmallow meringue on the outside, and the cold ice cream and cake at the bottom.”

Kleinhander recommends using one ice cream and one sorbet for the different layers to balance the cake’s flavours.

“Chocolate ice cream is on the richer side, so I also always try to do a brighter sorbet with it,” he said. “Raspberry has a great acidity to balance it out.”

I tried cooking eggs in a coffee machine like Martha Stewart, and it made the best omelette I’ve ever had

9 easy dishes you can make with an avocado, according to Michelin-starred chefs