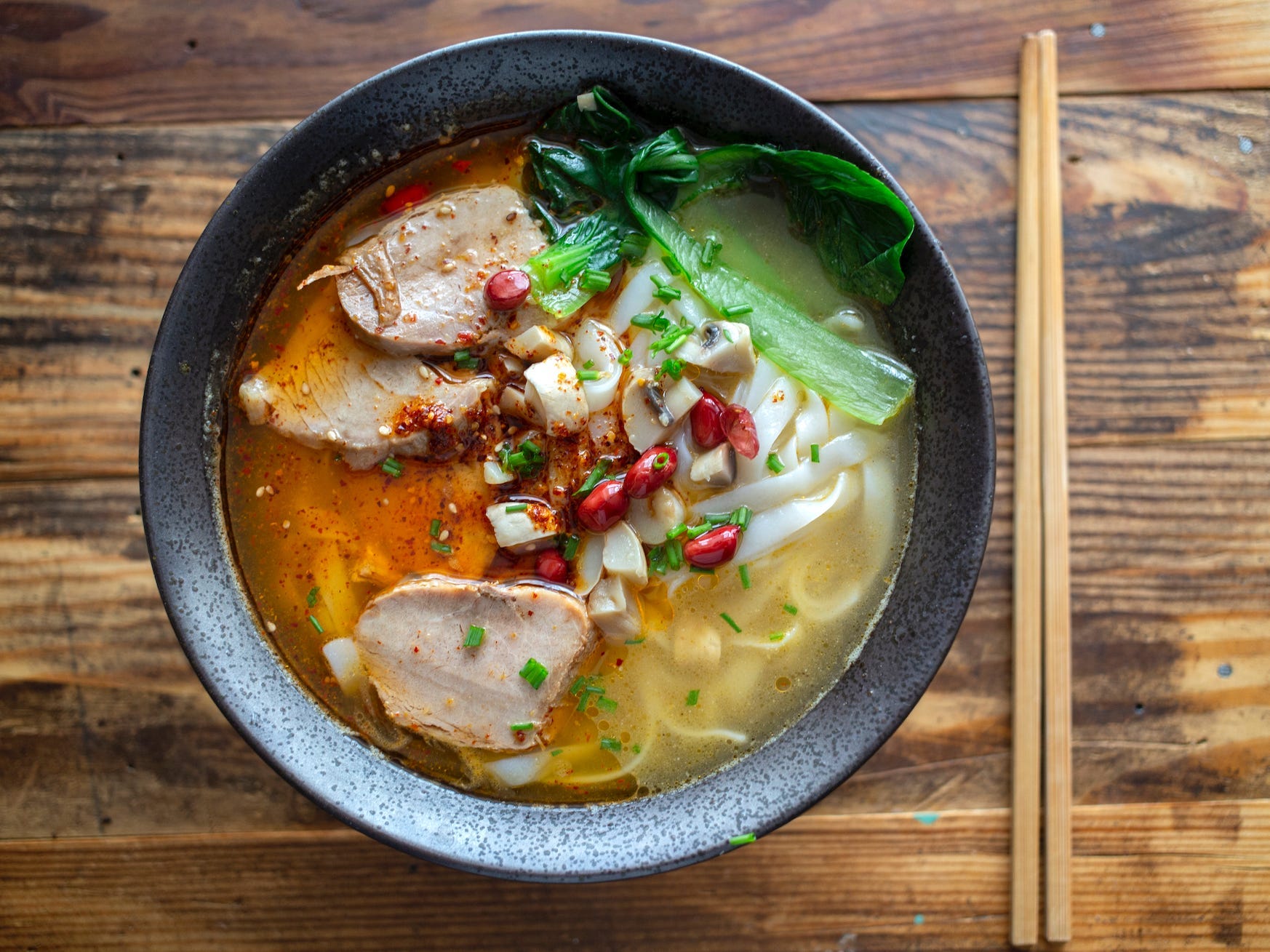 Many of us have been working from home since March, which likely means you haven’t been able to visit your usual office lunch spots.

We know you’re probably getting bored of what you’re whipping up in the kitchen, so Insider asked Michelin-starred chefs to share their favourite quick lunch recipes â€” plus their tips and tricks so you can easily re-create them.

From Catalan tomato bread to the perfect BLT, these simple dishes will definitely have you looking forward to your next lunch break.

You can whip up a great burrito at home just by using your leftovers. 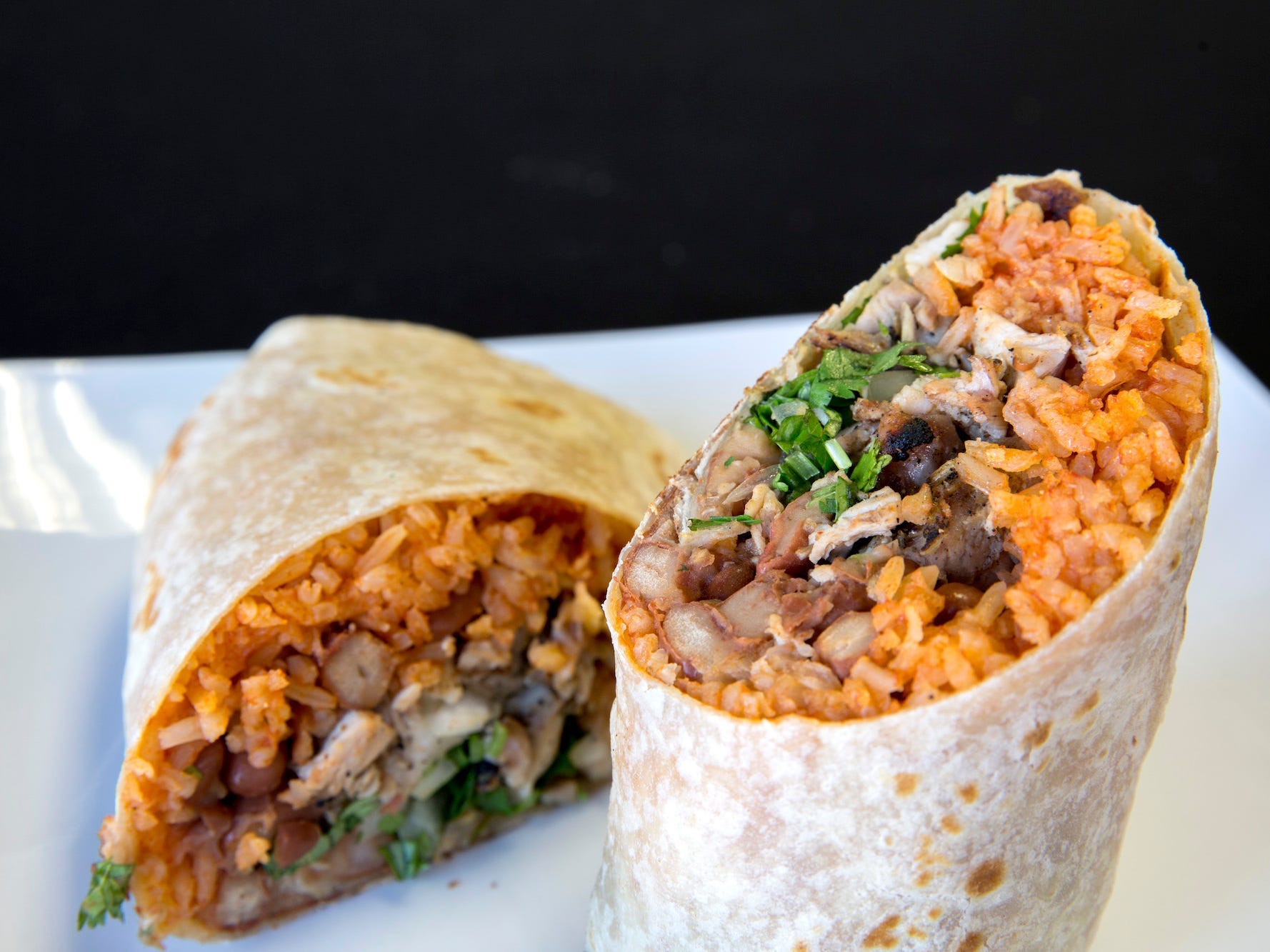 “In Southern California, we are so in tune with Mexican food,” he told Insider. “And my kids love it as well, so I often try to do a quick burrito.”

“I love a burrito because it’s a good way to use up leftovers,” Stone added. “Whatever’s in your fridge, you can repurpose.”

Since Stone often roasts a lot of chicken at home, he usually mixes some leftover chicken with a chipotle or adobo-style sauce.

“I’ll toss that with whatever veggies I have lying around in the fridge, like green onions or roasted peppers,” he added. “I use beans more than rice, grab a tortilla, put a little cheese, and away you go.”

Take your classic BLT sandwich to the next level with a bacon vinaigrette. 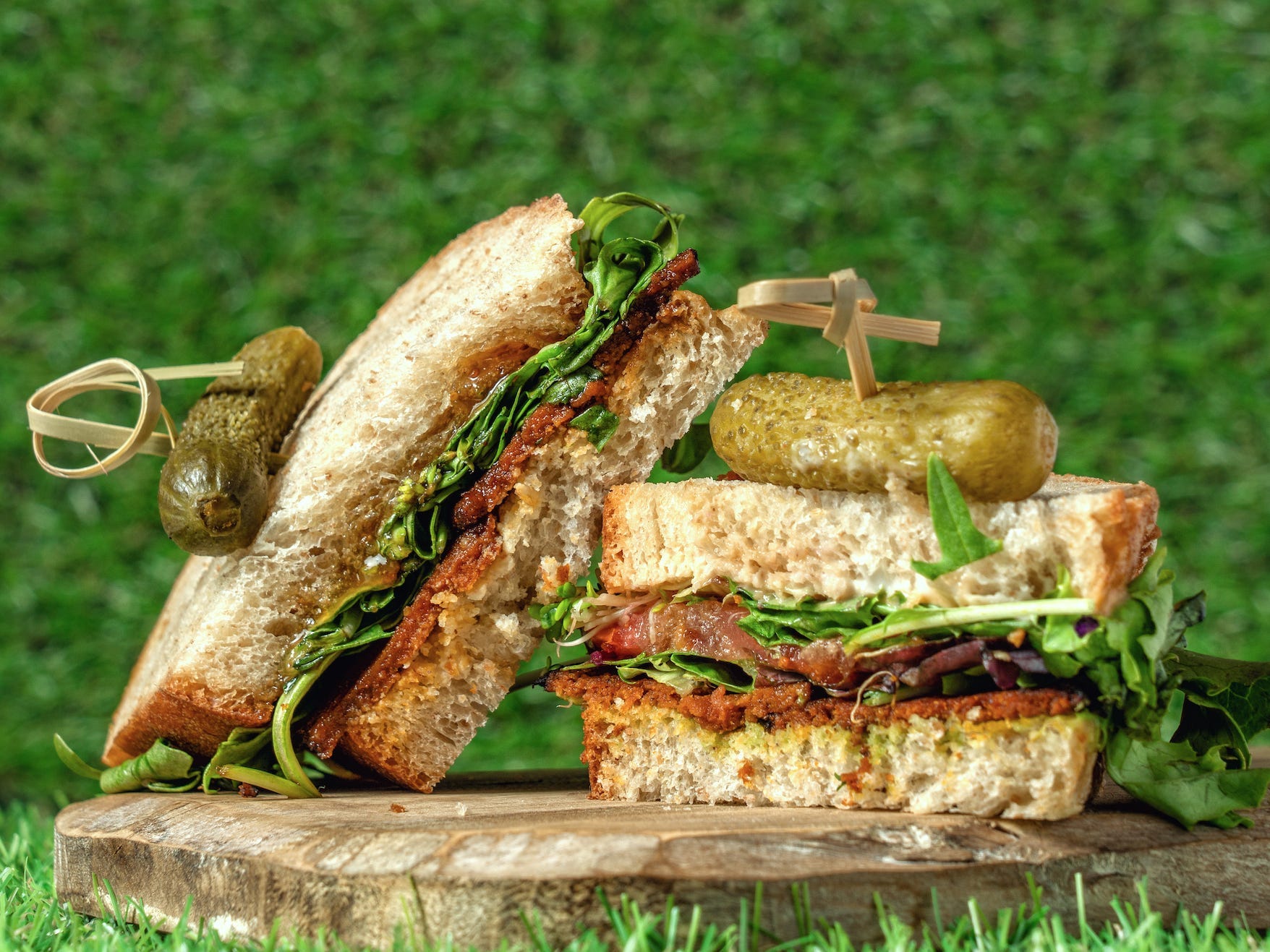 Sonia TapiaMazen Mustafa adds some toasted nori to his mayonnaise to make his BLT ‘otherworldly.’

Mazen Mustafa, executive chef at the newly-opened Fellow in Los Angeles, told Insider that he always makes this BLT sandwich when he’s in a rush.

“Who doesn’t love a good BLT?” he said. “I kick it up by making a simple vinaigrette using the bacon fat to give it a bit more depth of flavour. And, if you really want to get crazy, add a bit of toasted nori to the mayo and it makes the sandwich otherworldly.”

First, cook your bacon in a nonstick pan until it’s crisp. Then, use the rendered fat to make the vinaigrette, adding 60 grams of olive oil and 20 grams of sherry vinegar.

Toast the bread (Mustafa recommends potato bread) on both sides until it’s golden brown, then spread each side with mayonnaise and layer the bacon, tomato slices, and butter lettuce on top.

Finally, dress your lettuce with the vinaigrette, close the sandwich, and enjoy!

If you’re craving breakfast for lunch, why not try a bacon and egg muffin inspired by McDonald’s. 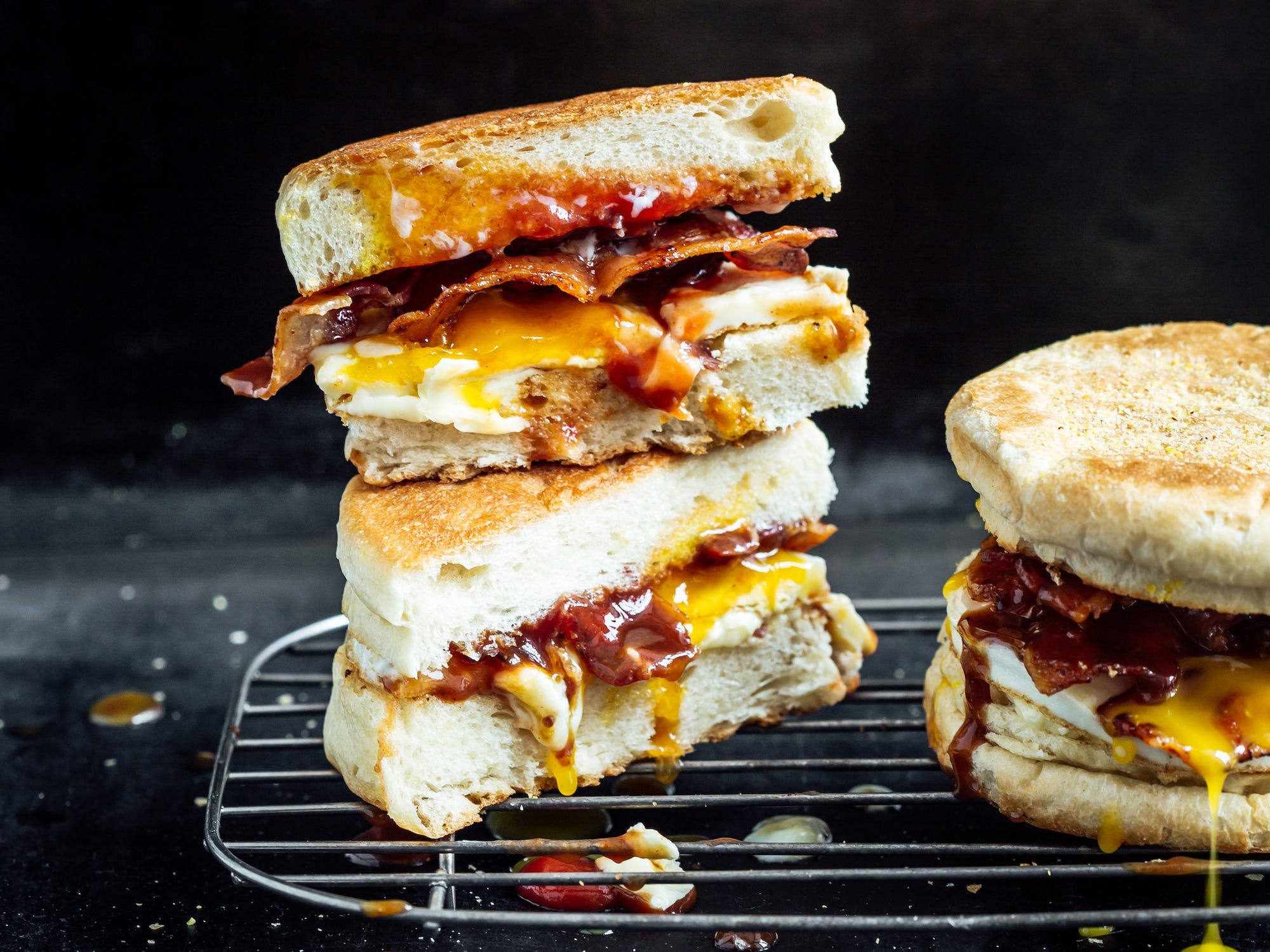 “This muffin wins every time,” Greg Marchand, the chef-patron at Frenchie in London, told Insider. “It’s healthier than the McDonald’s version, and about 100 times better!”

“My kids and wife love it, too, and – if you’re like us and generally have cheese, eggs, and bacon in the fridge – it’s perfect and comes together in about 10 minutes.”

To start, Marchand recommends breaking your egg into an egg ring in a nonstick frying pan.

Once it’s time to assemble the simple sandwich, Marchand recommends spreading butter on both halves of your English muffin and then heating their buttered sides on a griddle or skillet until they soften.

“Turn over the muffin halves and make the sandwich directly on the griddle or skillet while the outside toasts,” Marchand added. “Lay a slice of cheddar cheese on each half, and let the heat of the muffin melt them.”

Marchand recommends adding plenty of ketchup on one half and HP Sauce on the other. Then, add two slices of bacon to the bottom half and put your fried egg on the top half with a little salt and pepper.

“Only join the two halves of the sandwich when it’s time to eat it so that you can have the pleasure of breaking the yolk as you sink your teeth into it,” he said.

Or give your usual omelette a twist inspired by the flavours of Thailand. 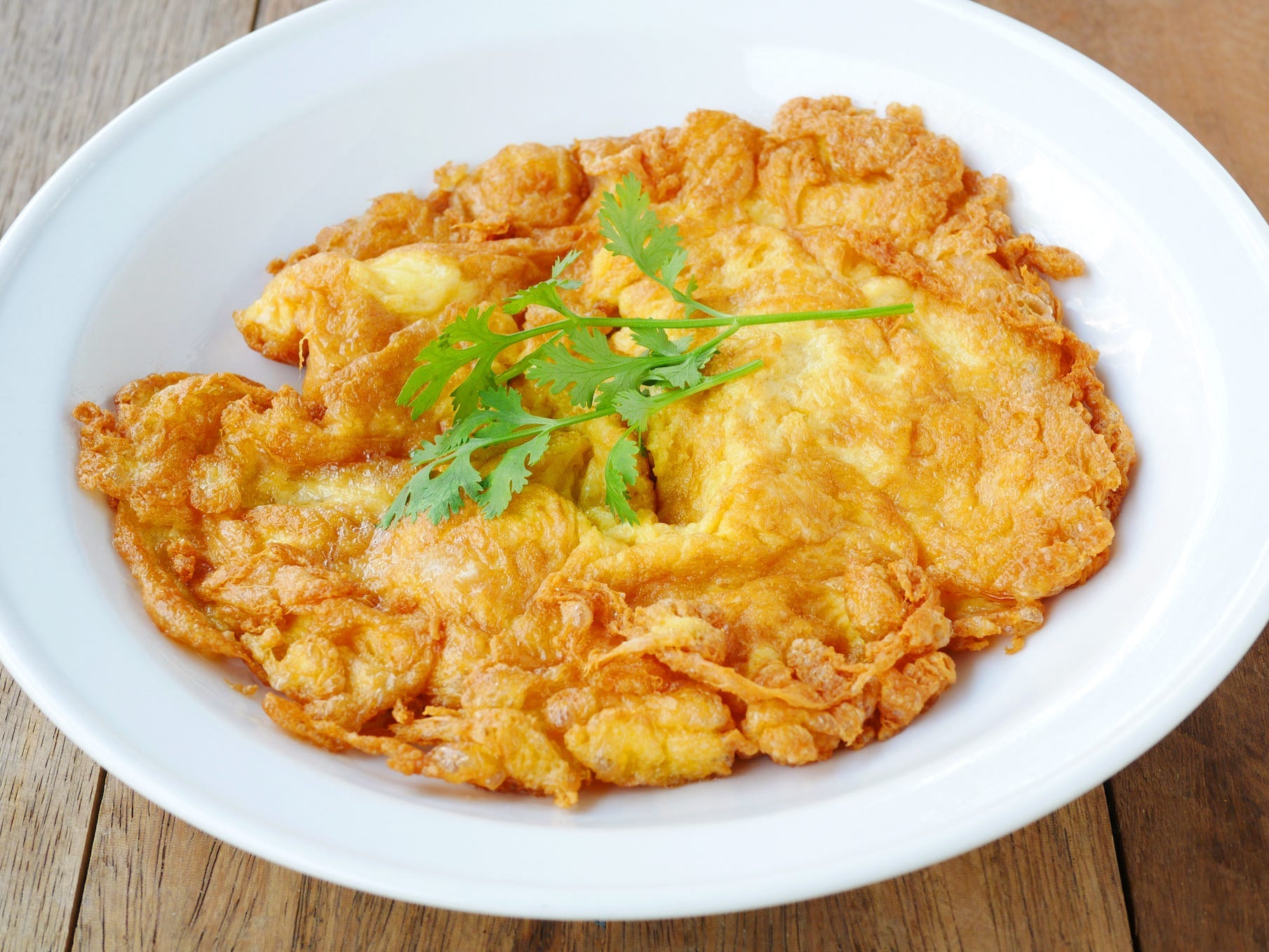 Luissybuster/Getty imagesBeverly Kim said you’ll never go back to a regular omelette once you try it Thai-style.

Beverly Kim, who runs Parachute in Chicago with her husband Johnny Clark, told Insider that she whips up Thai omelettes at her home all the time.

“When you’re a working mum, you want something delicious but really fast,” she said. “I have three kids under 10, so I have to be very efficient!”

Kim said the most essential part of the Thai omelette is the seasoning. She mixes Thai soy sauce, Thai oyster sauce, and fish sauce together with her eggs for a “great authentic flavour.”

“Then, the world is your oyster,” Kim added. “You can add any vegetable to that mixture. Cilantro or scallions, I’ve done it with cabbage, onions, tomatoes, corn – the kitchen sink basically! You can add extra lime on the top or minced chillis to spike it up and give more flavour, or have it standard and it still tastes great.”

Kim recommends serving your Thai omelette over some jasmine rice, or with green curry on the side.

“Once you learn how to make the Thai omelette, it’s a go-to,” she said. “It’s so flavorful, it’s hard to go back to a regular omelette.”

This salmon rillette will have you feeling fancy, and it also works great as a big-batch recipe. 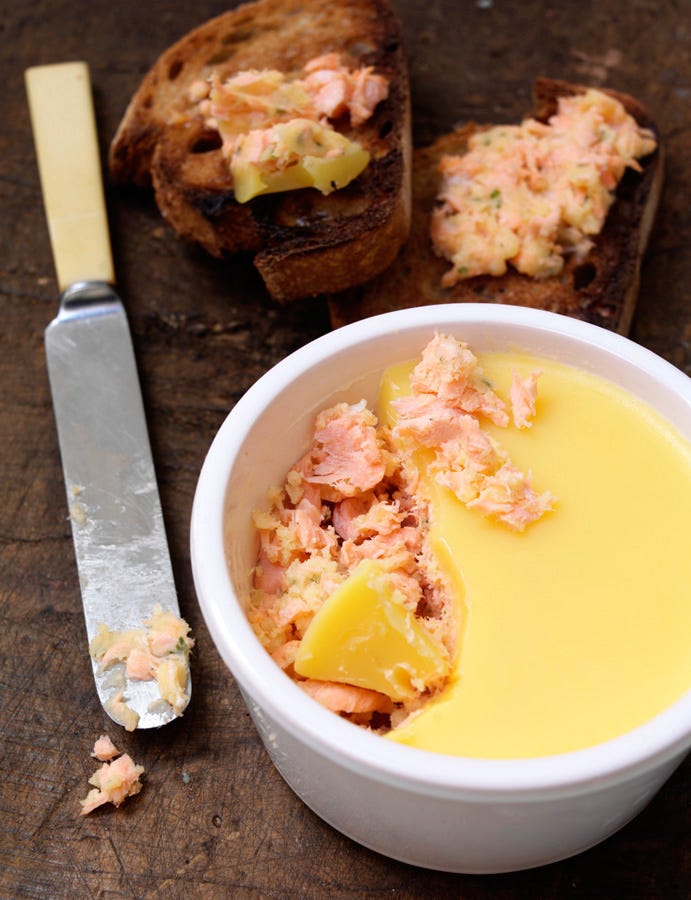 MuseTom Aikens’ salmon rillette (pictured) can last in the fridge all week.

“This is a perfect quick lunch, and you can make it on a Sunday night and nibble at it over the week,” Tom Aikens, the chef and founder of Muse in London, told Insider.

Before you begin, Aikens said it’s essential that all your ingredients are at room temperature, “otherwise the mix may split if it’s worked when cold.”

First, poach your salmon in seasoned vegetable stock until it’s pink in the middle. Let it cool, then flake the fish into small pieces.

“If you’re pushed for time, don’t worry about poaching the salmon,” Aikens said. “Just get some pre-poached flakes or fillets from the shop!”

Mix some smoked salmon with mayonnaise – plus lemon zest and juice – before adding in the poached salmon, chopped chives and dill, and some salt and pepper.

“To finish the rillette, clarify some melted butter,” Aikens said. “Cool it to room temperature and pour over the top. Then, place the mix into ramekins and refrigerate until set.”

“It’s great to have in the fridge for when you’ve not got much in the house,” he added. “Just serve with some decent bread, and a bit of something green on the side, and you’ve got yourself a tasty lunch in five minutes!”

Give your regular chicken salad a flavorful twist by adding a sesame miso vinaigrette. 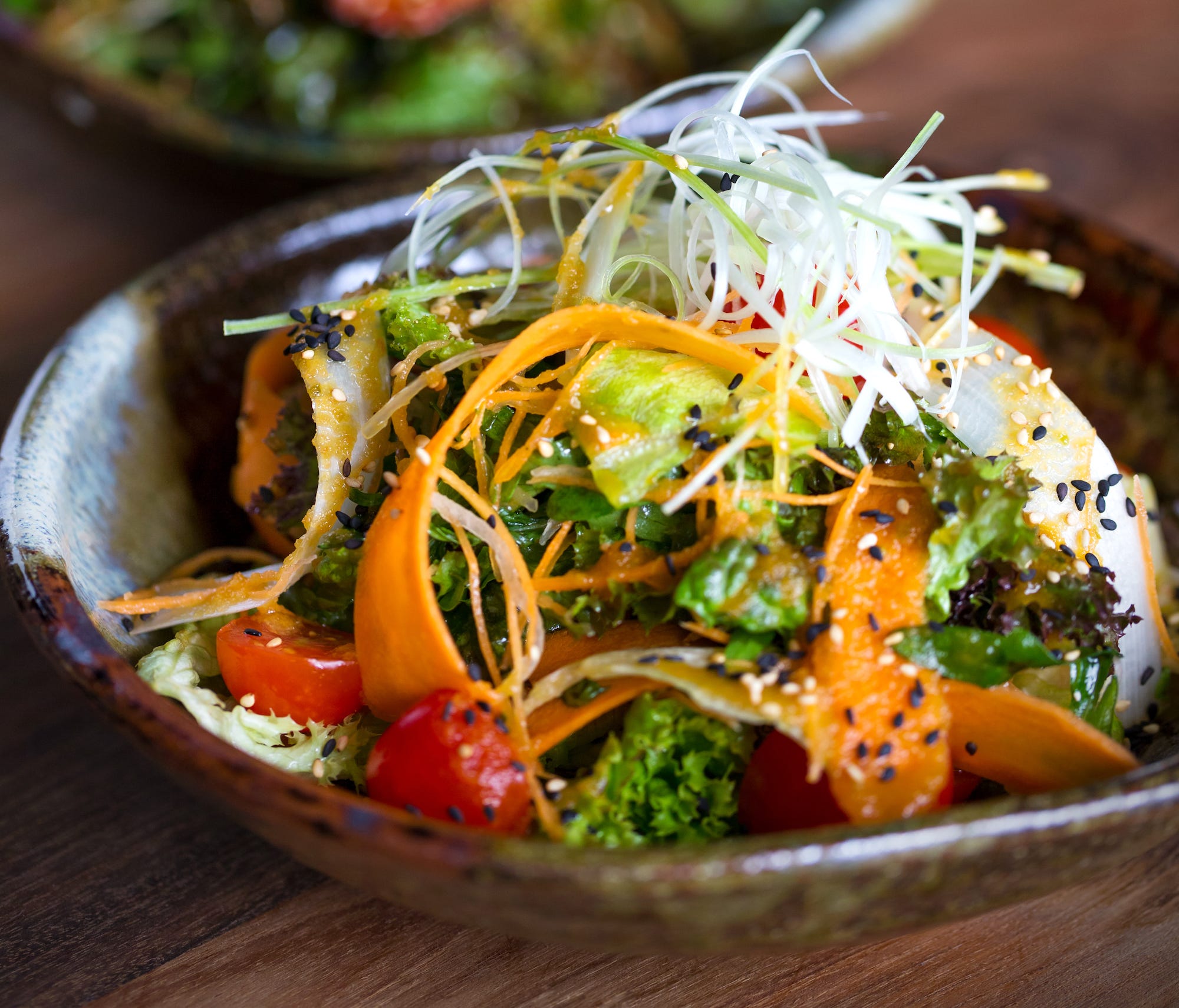 Andrew Zimmerman, of Sepia in Chicago, told Insider that he loves whipping up this quick dressing for his favourite chicken salad.

Zimmerman poaches his chicken breasts in lightly-salted water “so that they’re just cooked,” then shreds the chicken meat which “doesn’t take very long at all.”

“Then I make a sesame miso vinaigrette with some garlic and ginger, and a little touch of balsamic vinegar if I’m feeling jaunty,” he added.

Zimmerman usually uses romaine lettuce for this salad because it stands up to the vinaigrette well, and has a good crunch.

“And you can add a lot of stuff, like shaved radishes, thinly-sliced celery, carrots, even raw broccoli,” he said. “It’s a really tasty lunch that can be done really quickly.”

Catalan tomato bread will transport you to Spain with just four simple ingredients. 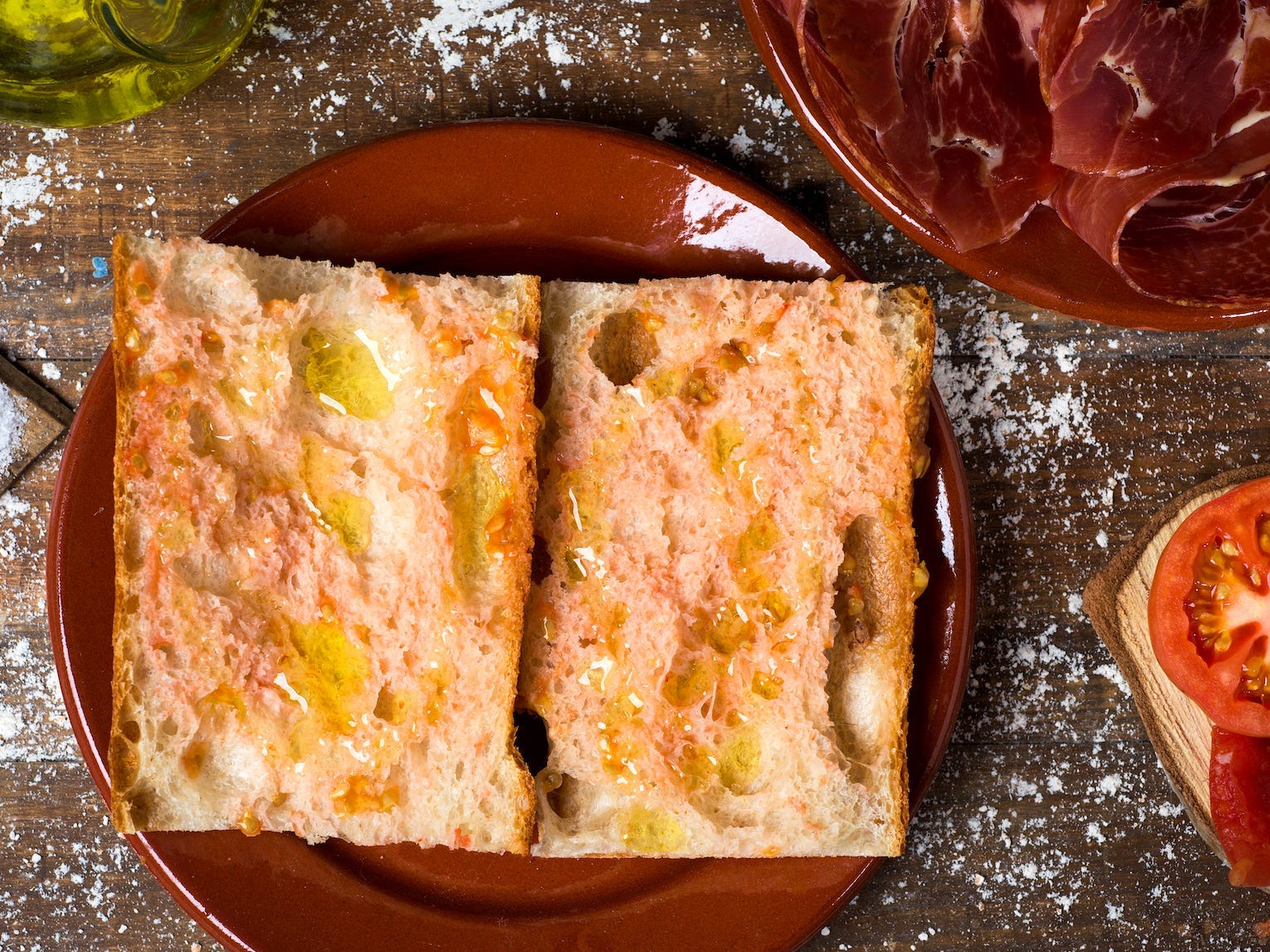 Nito100/Getty ImagesCatalan tomato bread is made with garlic, tomato, and some cured ham.

“It’s a very simple open-faced sandwich that you can make, and all you gotta do is have good bread, garlic, a tomato, and some cured ham,” Zimmerman told Insider.

Zimmerman said he often toasts some country-style sourdough bread, then takes a clove of peeled garlic and rubs it all over the slice “just enough to perfume it with the garlic.”

“Then I take a tomato, cut it in half, and rub the tomato on the toast,” he added. “That kind of grates the tomato onto the bread.”

Zimmerman tops off his sandwich with some thin slices of jamón Ibérico or serrano ham.

“It’s a very nice lunch,” he said. “You’ve got a little protein and a little starch. It’s one of those things where you’ve made something delicious with little work because of the quality of the ingredients.”

Combine ham and pickles for a delicious sandwich that only takes 15 minutes to assemble. 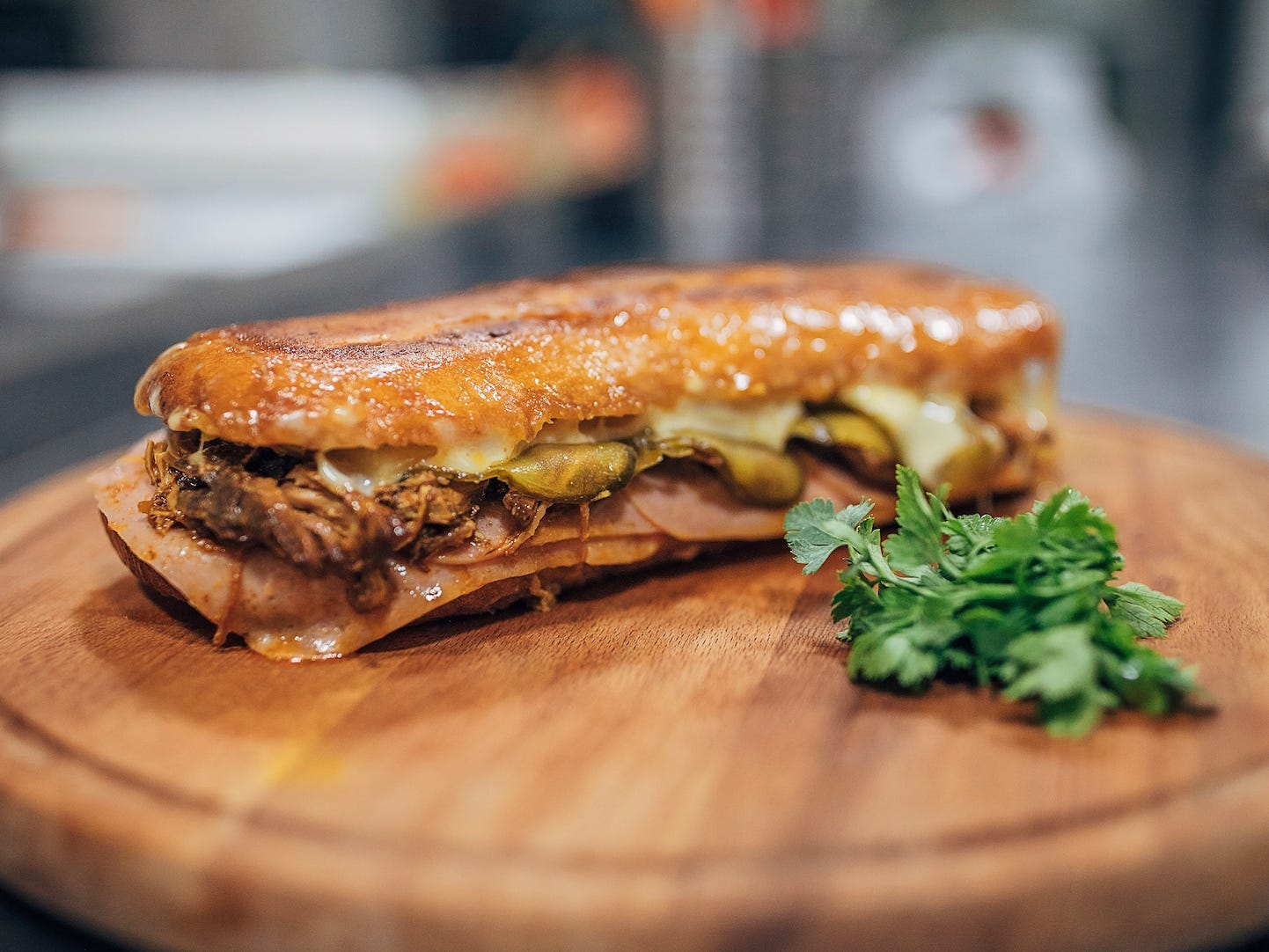 “Top Chef” winner Joe Flamm told Insider that he always has bread and butter pickles in the fridge so that he can make his favourite lunchtime sandwich.

“They’re a little sweeter than dill pickles, and I make them with zucchinis and regular cucumbers; I’ll pickle them the same way,” he said.

Flamm – who was most recently the executive chef at Spiaggia in Chicago – also always has baguettes in the freezer, which he’ll bake for 15 minutes when he wants to get a sandwich ready.

Once the bread is out of the oven, he’ll add shaved ham, butter, and those homemade pickles.

“It’s a 15-minute lunch to make, but it makes it feel like a nice Sunday afternoon lunch for me and my wife,” he said.

And as temperatures begin to dip, you can’t go wrong with a soothing bowl of ramen. 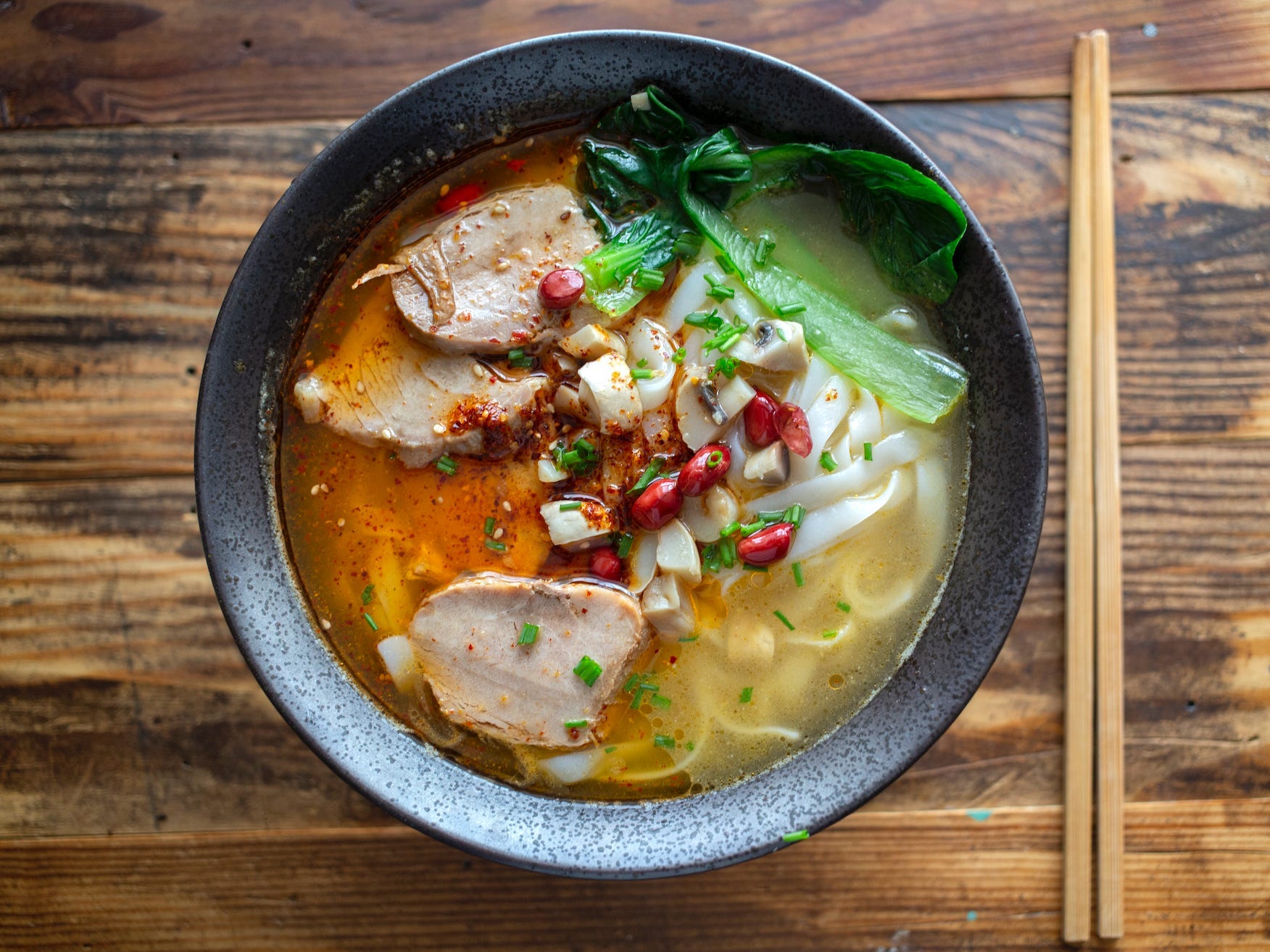 yipengge/Getty ImagesBrad Carter loves using his leftovers to whip up a bowl of ramen.

Brad Carter, of Carters of Moseley in Birmingham, England, told Insider that he loves how versatile a bowl of ramen can be for lunch.

“The only thing holding you back is your imagination,” he said. “I’ve been known to have hot-dog ramen!”

Carter usually just looks to his fridge for inspiration, often using a beef stock or even throwing in some leftover duck if he’s got it.

“I’ll also always go for some kind of egg,” he added. “And then there’s always some kind of vegetable. I’ll use things like bean sprouts, stuff that’s really succulent and contains a lot of juice so that, when it softens up, it tastes amazing.”