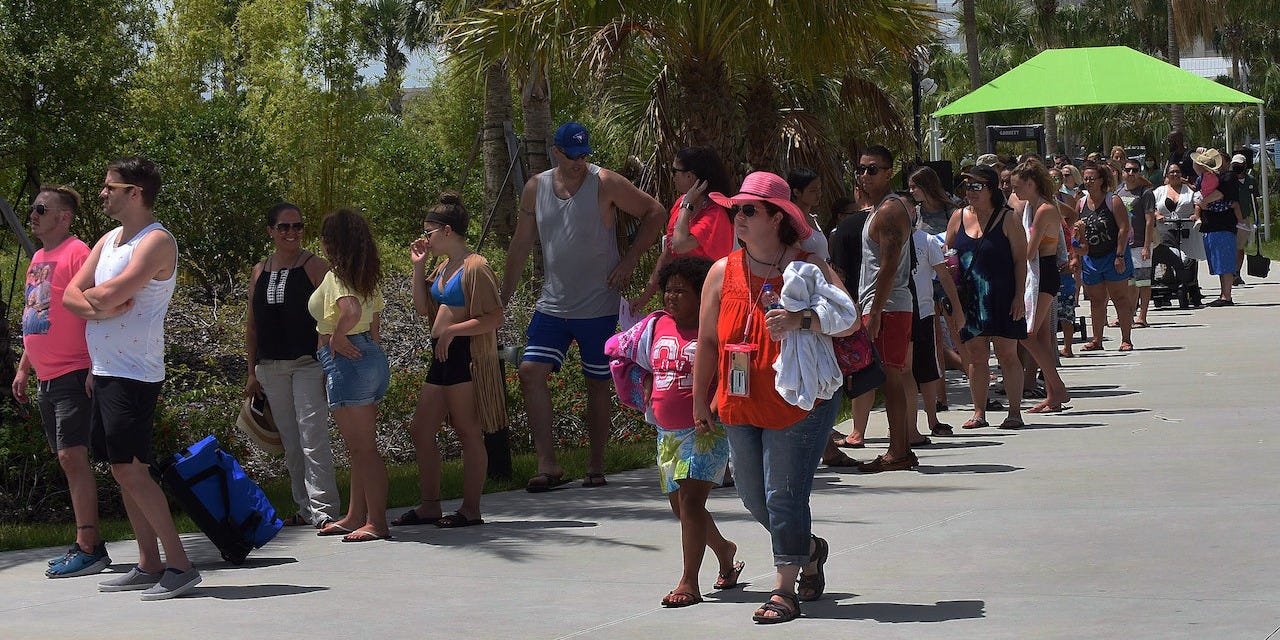 Mayor Francis Suarez of Miami is saying “I told you so” to Florida’s governor.

Back in March, while Suarez was quarantined at home with an asymptomatic case of the novel coronavirus, he warned that his city could become the next New York, which was then the national epicentre of the pandemic.

Gov. Ron DeSantis was slow to issue a statewide lockdown, which he finally did April 1 amid significant pressure. The lockdown lasted only about a month, and DeSantis said his state had proved more “draconian” social-distancing policies were unnecessary to contain the spread.

“Everyone in the media was saying Florida would be like New York or Italy, and that has not happened,” DeSantis said at an event with President Donald Trump in late April.

But earlier this month, Florida’s coronavirus cases began skyrocketing, and the state is now a national hot spot.

On Saturday, Florida recorded 9,585 new cases. The state’s daily infections have seen a fivefold increase over the past two weeks, The New York Times reported Sunday. And the percentage of positive tests has tripled since May – clear evidence of a surging infection rate.

Suarez told Business Insider in a Monday interview that the spike in Florida’s cases resulted from the state’s early reopening and widespread noncompliance with social-distancing rules. He argued that his more cautious approach to reopening had helped Miami’s infection rate grow more slowly than elsewhere in the state.

“People thought this was over,” said Suarez, a registered Republican. “I can’t speak for all Floridians, but … I was the last city to open in Florida, and I got criticised for it, and I think now people see the wisdom in our more conservative approach.”

Dr. Aileen Marty, an infectious-disease specialist at Florida International University who is advising both Suarez and Miami-Dade County’s mayor, Carlos Gimenez, on their pandemic responses, told Business Insider that DeSantis had “facilitated” the resurgence of the virus in the state.

“His actions speak very loudly that he did not realise that not taking the virus seriously will invariably lead to a worse economic fallout than taking it seriously and doing it right in the first place,” Marty said in a Tuesday interview.

DeSantis’ office did not immediately respond to Business Insider’s request for comment. 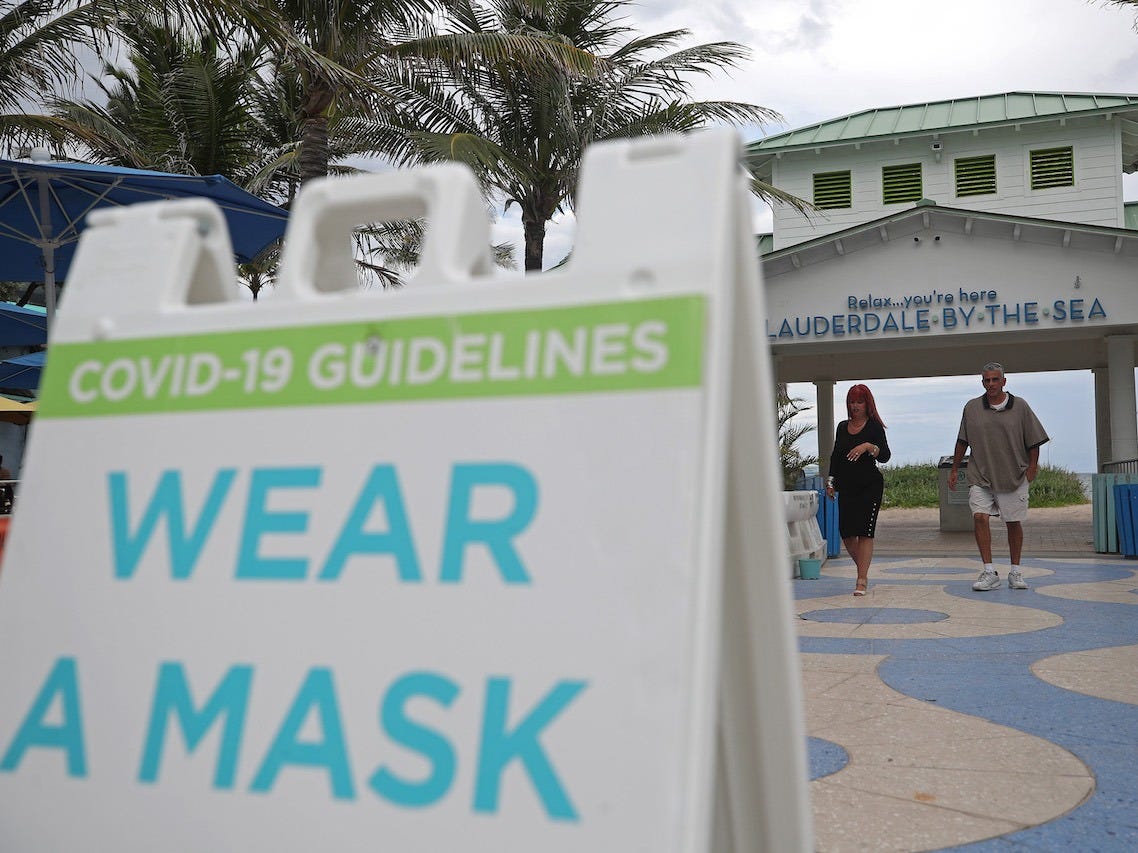 Suarez says he’s “trying to be surgical” in his approach to containing the pandemic through policy but is prepared to reintroduce a citywide lockdown if hospitals neared a “critical place.”

On June 25, Suarez implemented a new order requiring everyone in Miami to wear face masks in public spaces or face a civil fine of $US50 to $US500. Those who violate the order several times can be arrested, but the city for now is focused on raising awareness and distributing free masks.

The mayor compared wearing a face covering, which studies have shown can block the respiratory droplets through which viral particles are spread, to wearing a seat belt.

“If you wear a seat belt, it doesn’t ensure that you’re not going to get seriously hurt if you have a car accident, but it improves your chances and it’s not a very difficult thing to do,” he said.

Marty, who said she mentioned the seat-belt analogy to Suarez, said stop signs were even more comparable to face masks because they protected both the driver and others in the vicinity.

Echoing a host of public-health experts, Suarez is calling on Florida to implement a statewide mask mandate, though he said he hadn’t spoken about the issue directly with the governor.

The mayor said Trump’s refusal to wear a mask and set a national example had “without a doubt” undermined his efforts to encourage mask wearing. Marty agreed that “leaders set the tone” when it came to normalizing these practices and added that she’s encouraged by Vice President Mike Pence, who has previously flouted social-distancing recommendations but has recently begun calling for increased mask wearing.

Marty also says masks should be mandatory statewide in public indoor places and heavily trafficked outdoor places for the next month to try to reduce infections to a level at which contact tracing, testing, and isolation can effectively contain the virus.

“If we don’t do that, we’re heading towards another lockdown,” she warned, adding that numbers over the next week would be crucial in determining whether Florida would need to shut down again.

Florida has already had to reverse aspects of its reopening.

Last Friday, state officials banned the sale of alcohol at bars after reopening them in May. And officials announced on Sunday that beaches in Miami, Fort Lauderdale, and Palm Beach would be closed for the Fourth of July weekend.

“As we continue to see more COVID-19 positive test results among young adults and rising hospitalizations, I have decided that the only prudent thing to do to tamp down this recent uptick is to crack down on recreational activities that put our overall community at higher risk,” Gimenez said in a press release.

Marty, who advised Gimenez in his decision to close beaches, said that particular move was designed to have “a maximal public-health impact and a minimal economic impact,” while sending a warning to the public.

Closing beaches and other public parks could encourage people to gather in arguably more unsafe places, including private homes and backyards. Marty said officials had considered those risks and were rolling out public messaging to raise awareness about social distancing in private spaces. 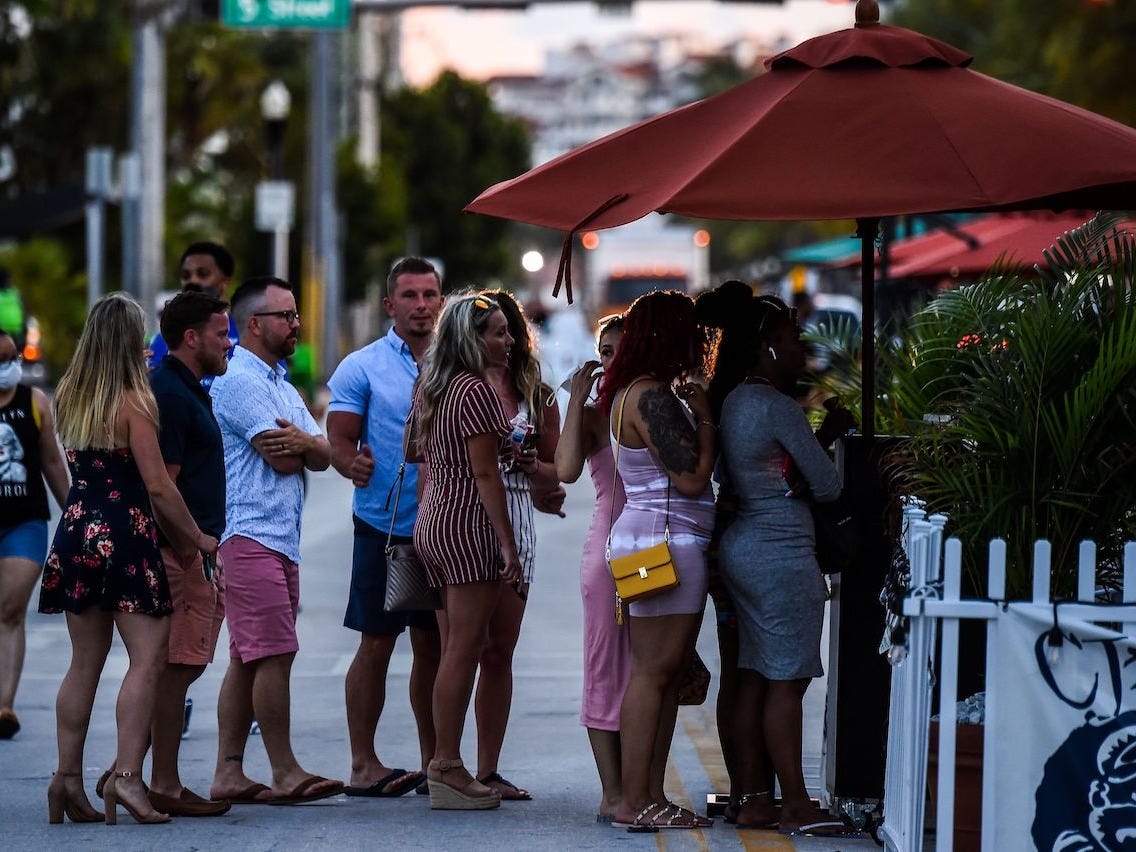 CHANDAN KHANNA/Getty ImagesPeople in line to enter a restaurant on Ocean Drive in Miami Beach, Florida, on June 26.

A surge among young people

The virus appears to be spreading most aggressively among young Floridians.

The state announced last week that 20% of the state’s COVID-19 cases were people ages 25 to 34 years old.

But this comes after DeSantis repeatedly downplayed the risk the virus poses to younger people. He falsely claimed on April 9 that nobody in the US under age 25 had died from COVID-19. In fact, the CDC reported that five people under 25 had been killed by the coronavirus at that point.

And when the state reopened bars and restaurants in May, it welcomed young people back into environments where the virus can easily spread.

Suarez said he’s seeing lots of younger people flouting the rules. He rolled out new penalties on Monday for businesses that don’t comply with social-distancing policies.

“In Miami, we see a lot of restaurants that are acting like bars, we see people out on boats that are out partying all the time in violation of the social-distancing rules – we know there are a lot of house parties where that’s happening as well,” Suarez said. “People just think that they’re invincible when they’re younger.”

Public-health officials warn that the long-term effects of the virus remain largely unknown and even young people are seeing very severe cases of COVID-19. And they stress that younger people are unwittingly spreading the virus to older, more vulnerable people.

“There’s a lot of evidence of people bringing it home, who are younger, into households and the entire household getting sick,” Suarez said.