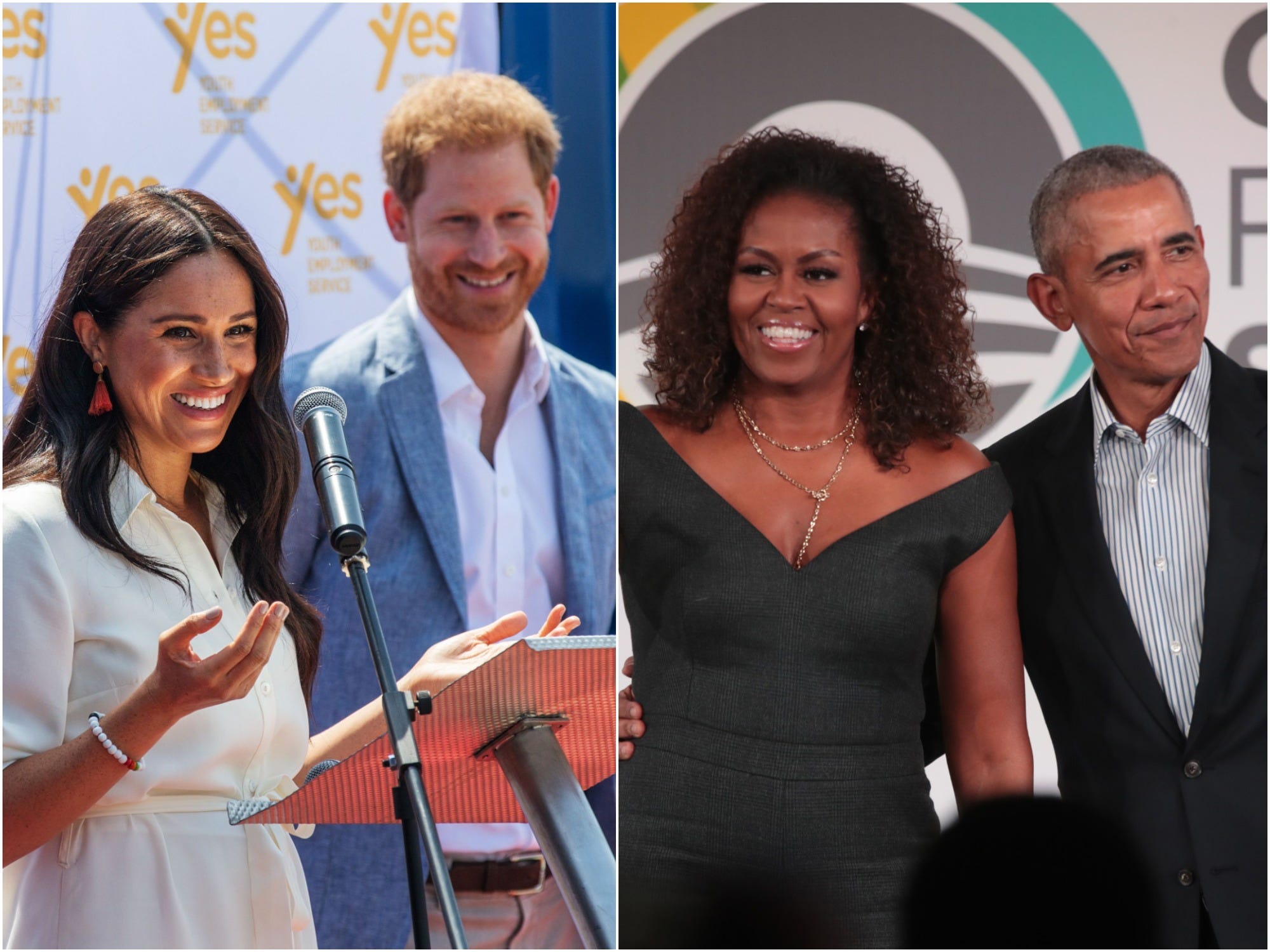 MICHELE SPATARI/AFP via Getty Images, Scott Olson/Getty ImagesMeghan Markle and Prince Harry have signed a production deal with Netflix like the Obamas.

The Duke and Duchess of Sussex are carving out their new post-royal careers, and the couple seem to be following the same path as Michelle and Barack Obama.

In the eight months since their resignation, Meghan Markle and Prince Harry have created a non-profit foundation, signed with the same speaking agency that represents the Obamas, and more recently, signed on to create documentaries for Netflix under their new production company.

These are strikingly similar to the projects the former President and First Lady took on when they left the White House in 2017.

Looking closely at these similarities will not only show the possible inspiration behind the Sussexes’ plans, but it could also show what to expect from the couple in the future.

The timeline of the Sussexes’ careers parallels with the Obamas’

The Obamas launched their official website, obama.org, on January 20, 2017 – the same day Barack’s presidency officially came to an end.

The website was used to share plans for The Obama Foundation, a non-profit organisation that aims to “inspire, empower, and connect people to change their world.”

Similarly, Harry and Markle’s first act as non-working royals was the launch of their website, sussexroyal.com, on the same day that they announced their resignation on January 8, 2020.

The website shared details about the couple’s transition from royal to private life, and plans for their forthcoming charitable foundation, which they later confirmed to be named Archewell after their son Archie.

Then, the couple signed on to Harry Walker Speaking Agency – the same agency that the Obamas have been signed to since February 2017.

Harry and Markle announced plans to speak on social issues such as racial injustice, gender equality, environmental concerns, mental health, and other topics that will align with the values of Archewell.

The couple’s recent plans to team up with Netflix show even more parallels to the Obamas.

In 2018, Michelle and Barack signed a deal to produce docu-series and documentaries for Netflix under their production company, Higher Ground Productions, before the release of Michelle’s memoir, “Becoming,” which was released in November that year.

On Wednesday, September 2, Harry and Markle announced they have signed a deal with Netflix. Like the Obamas, the couple plan to produce docu-series, scripted television shows, and documentaries under their own production company, which is yet to be named.

Although Harry and Markle are yet to sign a book deal, there was the recent release of the highly anticipated biography “Finding Freedom” by royal reporters Omid Scobie and Carolyn Durand.

The book chronicles Harry and Markle’s royal careers, their relationship with the royal family, and their resignation. While the authors spoke to friends in the couple’s inner circle, representatives for the Sussexes say Harry and Markle had no involvement with the book.

It’s been three years since the Obamas left the White House. Meanwhile, it’s been less than a year since the Sussexes made their departure from the UK.

While Harry and Markle are yet to confirm what their speaking and Netflix deals will entail, the Obamas have allowed us to see what projects of this kind look like in action.

After the release of Michelle’s memoir, she travelled around the US, Canada, and Europe for her “Becoming” book tour, which was documented for a Netflix special of the same name.

Harry and Markle could likely undertake a similar speaking tour, whether that be for a documentary, Archewell, or another project.

The couple embarked on several joint tours during their time as working royals, and visited South Africa, Morocco, Australia, and New Zealand, and many more locations around the world.

The Sussexes may also consider hosting an annual summit for Archewell, as the Obamas do for their foundation. They choose a different location for the summit each year, with last year’s event taking place in Chicago.

“We’re hosting the Summit in our backyard, Chicago, the place the Obamas’ story began and the future home of the Obama Presidential Centre and Museum,” CEO David Simas said in an official statement.

“By anchoring the Summit in the power of place, the Foundation will uplift the idea that a person’s community shapes their purpose and guides them to do meaningful and impactful work.”

Representatives for the Duke and Duchess of Sussex did not immediately respond to Insider’s request for comment for this article.

Prince Harry and Meghan Markle will launch a non-profit organisation, Archewell, named after their son Archie