@chubsuitguy/@postysdaughther/@metelus_1/TikTokTikTokers are participating in — and parodying — a trend about showing off your body.

Megan Thee Stallion’s music has soundtracked 2020 on TikTok.Propelled by a viral dance challenge, her single “Savage” was one of the biggest songs on TikTok this year, so it’s no surprise that her latest single “Body” has made waves on the app and become a dance challenge with choreography from the music video.

But the song has also sparked another trend in which people use it to show photos of themselves in form-fitting clothes, bikinis, or without shirts.

The trend, like the dance challenge, is based around the chorus of the song where Megan Thee Stallion raps the word “body” repeatedly. It’s not clear exactly who started the trend, but the earliest videos associated with it that have over 10,000 likes date back to November 21, the day after “Body” was released.

The trend isn’t concentrated under a specific hashtag or audio, although some users have tagged their videos with the hashtag #bodychallenge, which has over 707 million views (though not all of them are related specifically to the current trend). Two different snippets from “Body” â€” one from the beginning of the song and another from the end of the first verse â€” are also used as a part of the trend.

Rachel, a 17-year-old TikTok creator who posts primarily dance and fashion content, posted a video for the “Body” challenge that amassed over 1 million likes. She told Insider that she initially saw the challenge on her For You Page and thought that she’d join, saying that videos in which she incorporates photos from her Instagram tend to perform well and that she thought it was a “cute way for girls to support girls and promote confidence.”

@rachie.lovelmao hi this is my hw break but TY FOR 200k ILY ALL|û|û##fyp##foryou##WhenWeWereYounger##NeedToKnow##PajamaJam

The idea that the “Body” challenge is to “promote confidence” or body positivity does seem loosely tied to the trend, although that context doesn’t appear in everyone’s posts.

Other TikTok trends have espoused similar ideas of confidence and assuredness in your body. As BuzzFeed News reported in September, a group of influencers participated in a duet chain showing off their natural bellies. Influencer Carolina Guardian told BuzzFeed News at the time that many of the comments on her video were “girls saying ‘This makes me feel normal,’ ‘You look beautiful and I see myself,’ and ‘I have the same body and I want to get to the point where I accept myself.'”

That sentiment hasn’t necessarily carried over to viewers of the “Body” challenge. Comments on some posts, particularly those on videos from thin women, are from users saying that the trend has heightened their own insecurity. Some users even made disturbing quips about skipping meals after watching the clips.

Kayla, an 18-year-old TikTok user who posts mostly comedy and astrology content, left a comment on one “Body” challenge video that she wasn’t going to participate in the trend.

“My personal reasoning for not wanting to participate was more or less just because [of] the way in which these trends are portrayed,” she told Insider, saying that many of the videos she had seen featured thin young women. “If you don’t look that way, you’ll probably get much less attention and likes.”

It’s far from the first time that TikTok has grappled with body image. NBC News’ Sarah Kaufman spoke with young women who said that being on TikTok had “warped” their body image to the extent that they began to dangerously fixate more on diet and exercise. Eating disorder experts said that the phenomenon was reminiscent of similar problems on platforms like Instagram and Snapchat. Much of that content manifests as “fitspo” or records of unhealthy eating habits that could potentially be triggering for those at risk of eating disorder relapse.

A TikTok spokesperson told NBC News at the time that “content that supports or encourages eating disorders is strictly against our Community Guidelines and will be removed.”

While the “Body” challenge is theoretically focused on celebrating your own body, it appears to have inspired a wave of insecurities among others who commented on some of the most viral videos, including Rachel’s. 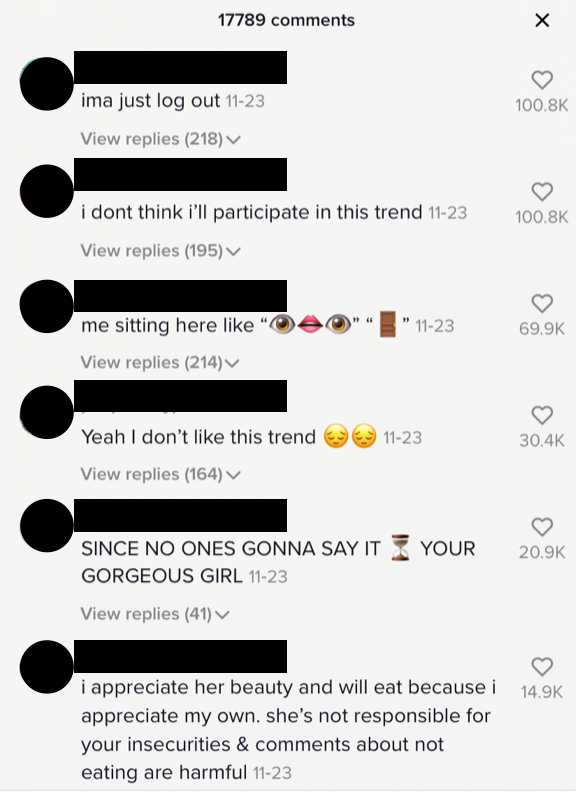 “Nothing on social media is real, the pictures I used were all ones where I was posing and taken at certain angles,” she told Insider. “It’s important to remember beauty comes from being confident in yourself.”

At this point, the trend has circled into parody

While plenty of people are still participating earnestly, the challenge has circled around to ironic or parody posts, with users posting blurry photos, memes, animals that move on beat, or non-conventional poses.

Still, the tension from the “Body” photo challenge lingers.

Rachel, who participated, said that she thought the trend was an opportunity for people to be confident in themselves, but that it also hurt others through comparison. “I do wish this trend wasn’t harmful to the people it [affected], nobody’s beauty takes away from anyone else’s,” she said.

Kayla said that she thought that the trend was “fine” but not “fantastic,” adding that while it did carry a message of body positivity, the ones that she saw go viral featured people who she described as society’s “perfect girl,” leading to pressure on other young people on the app.

“I think body positivity on TikTok is an amazing thing because there are people of all ages who could learn and take from it, but this particular trend felt more like a showing off thing [than] an empowering thing,” she told Insider.

TikTok and Megan Thee Stallion did not immediately respond to Insider’s request for comment.