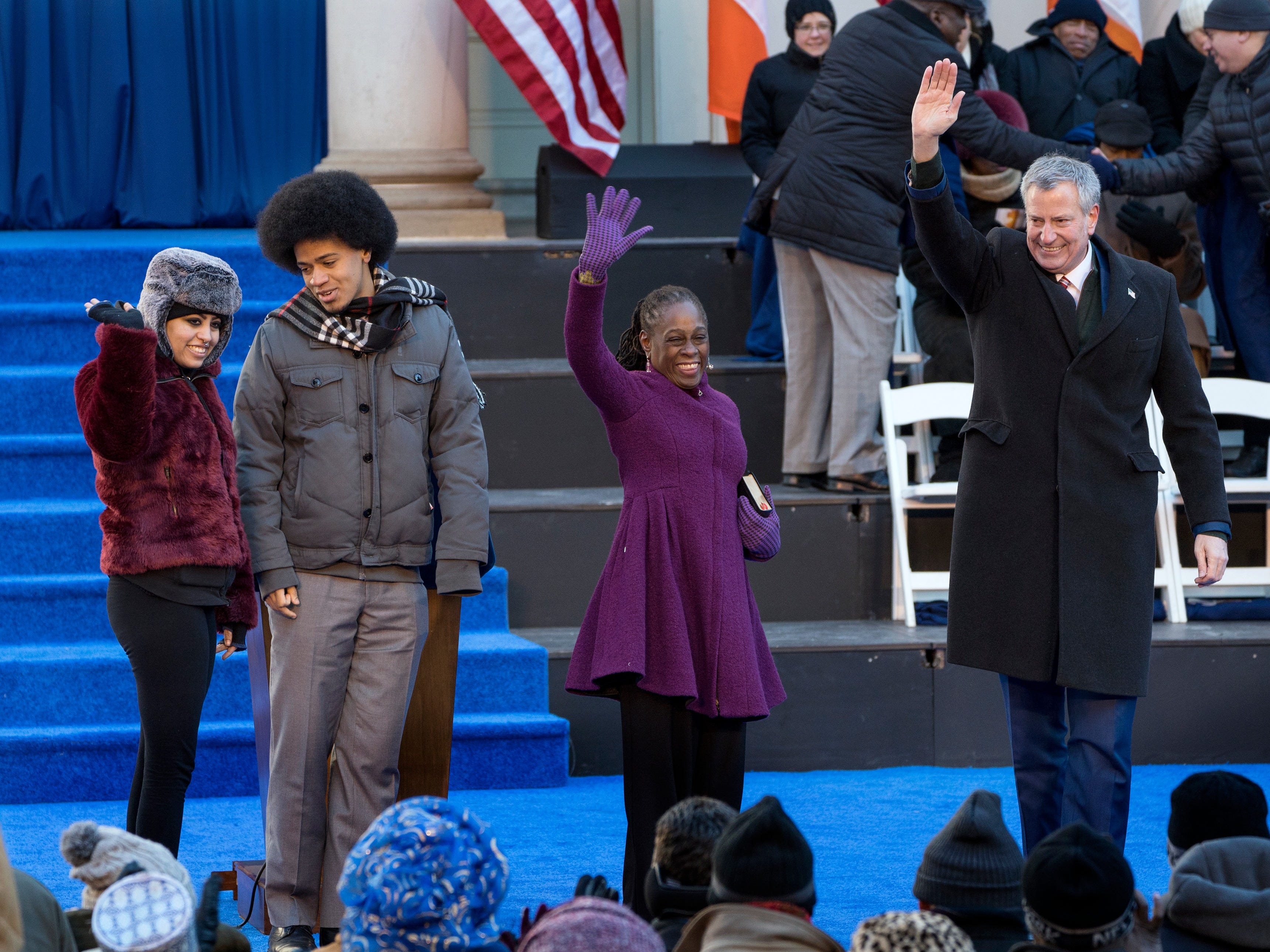 AP Photo/Craig RuttleNew York Mayor Bill de Blasio, right, and his family wave to onlookers after de Blasio was sworn in for a second term as mayor at City Hall in New York Monday, Jan. 1, 2018.

The de Blasio family are some of the most prominent faces in New York City politics. 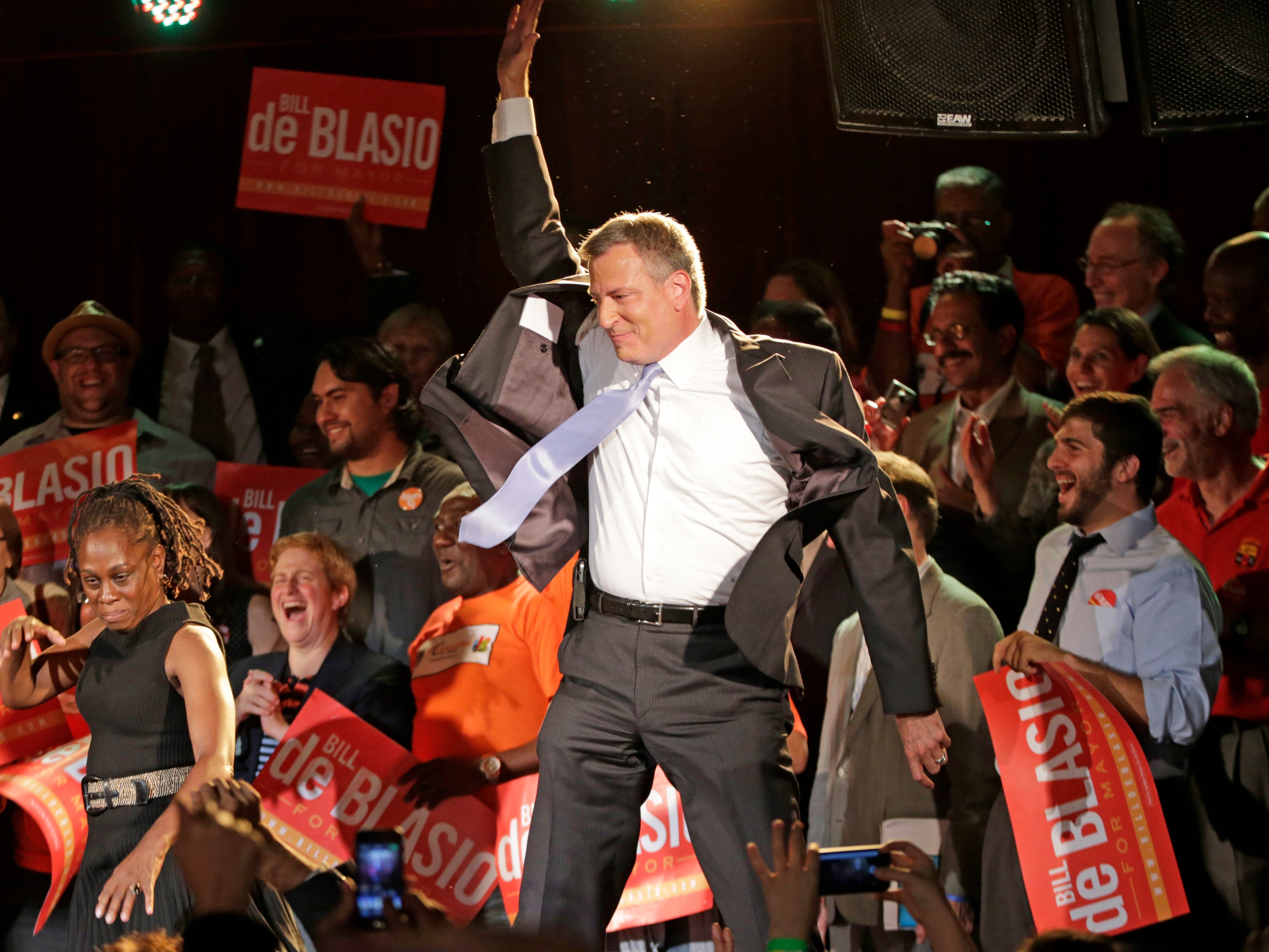 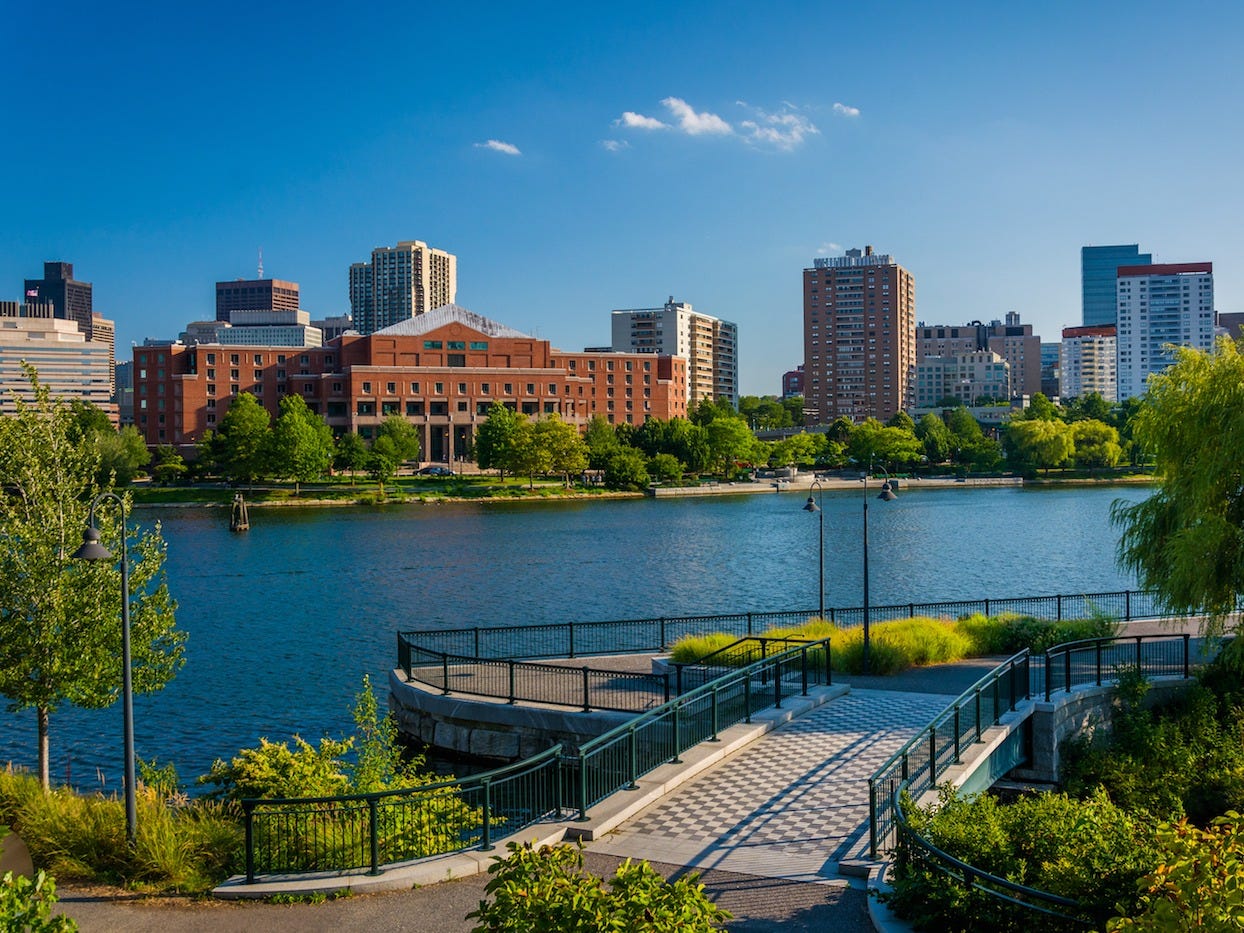 De Blasio was named after his father, a World War II veteran.

“All of my family, has always been, and for reasons I don’t fully understand, very interested in current events, politics, news, always reading all the time,” de Blasio told the New York Daily News.

Before becoming mayor of New York, de Blasio was on the New York City Council and served as Public Advocate. 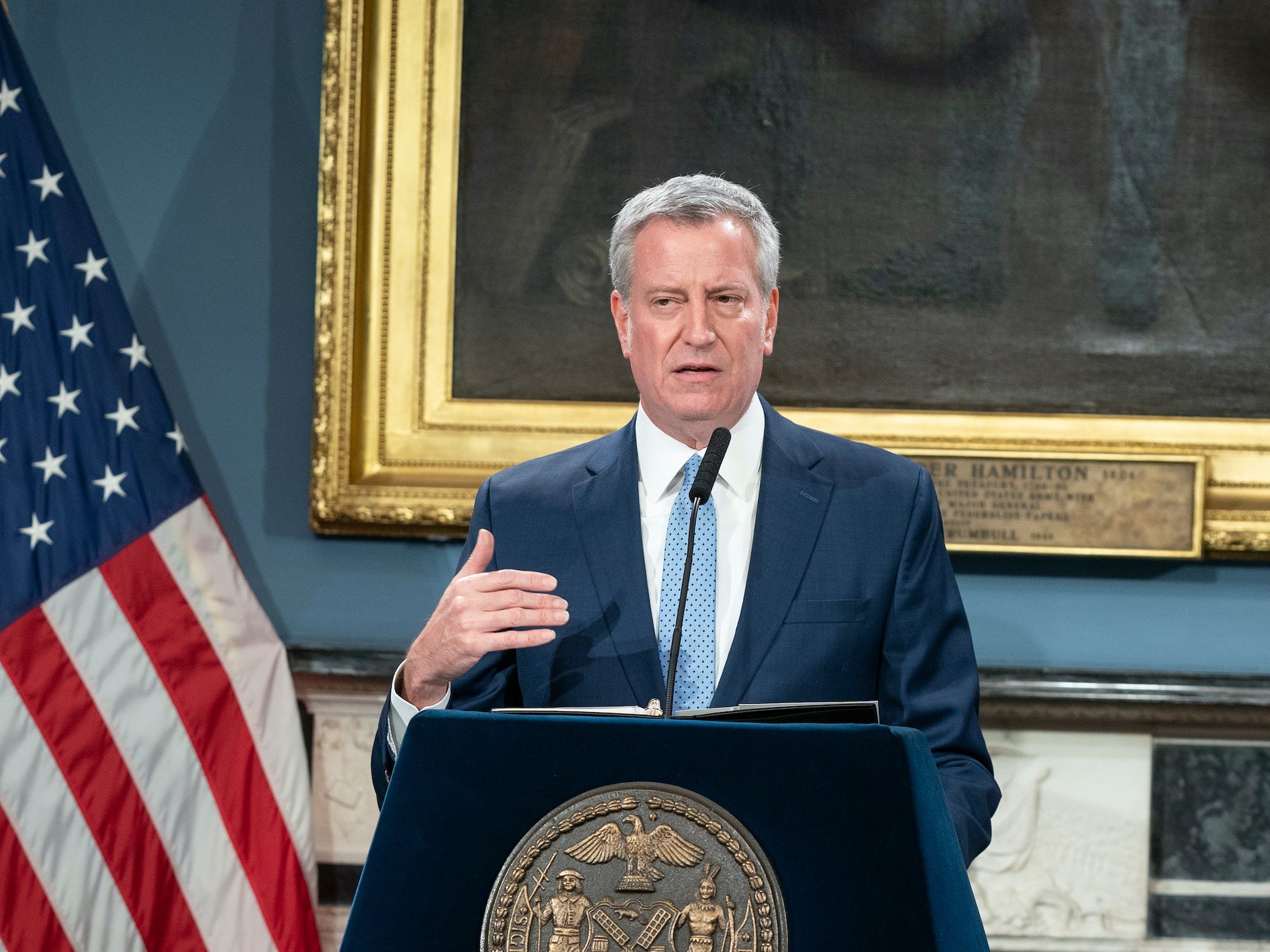 He was elected New York Public Advocate in 2009. The role of a public advocate is exactly what it sounds like – someone who communicates with the public to find out what they need and attempts to get it for them.

Since becoming mayor of New York, de Blasio has been known for proposing education and social reform. 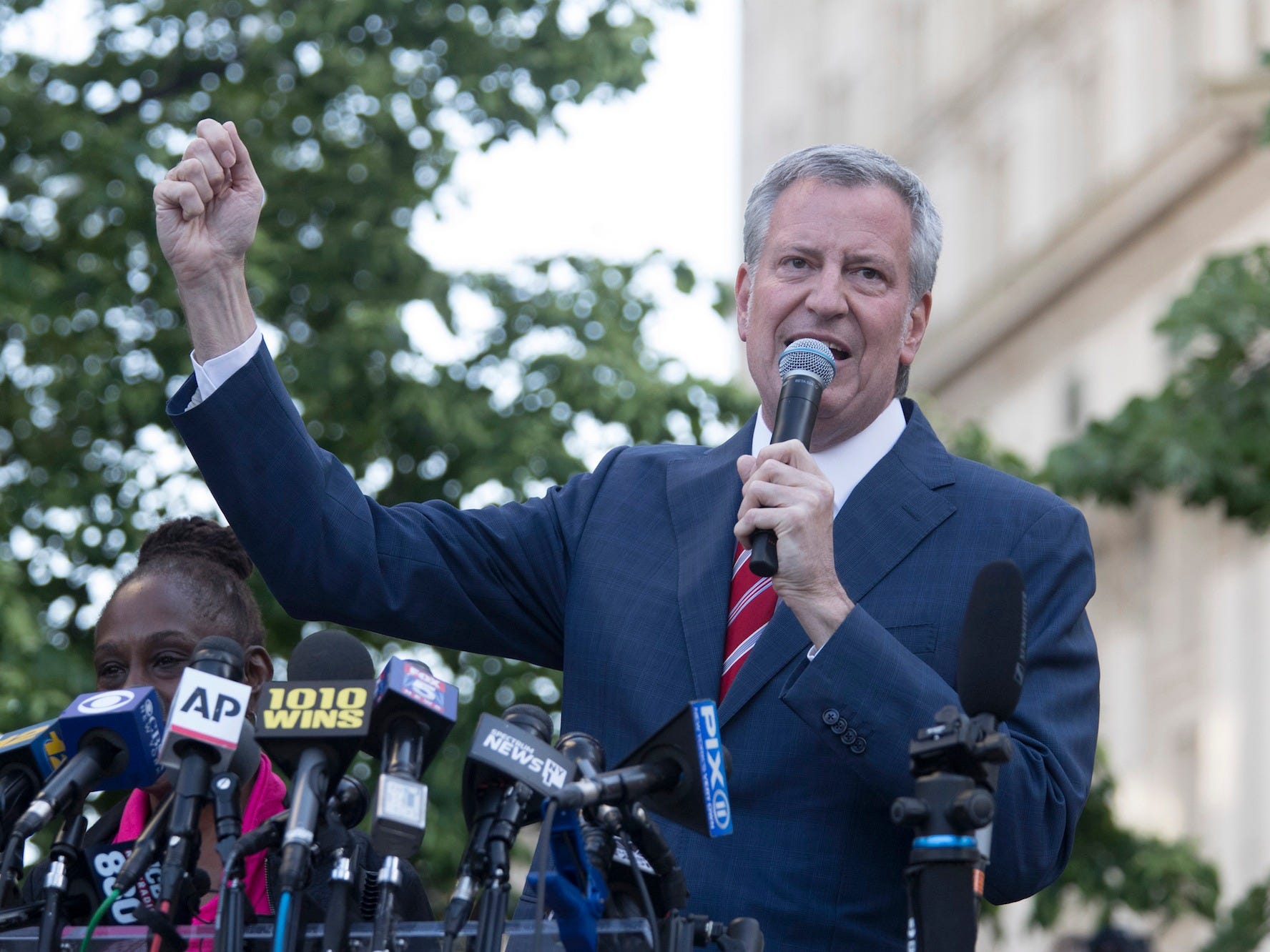 De Blasio is known for his efforts to reduce income inequality and increase the amount of affordable housing in New York.

De Blasio’s administration has expanded universal pre-Kindergarten, introduced paid sick time protections for workers, and raised the minimum wage to $US15 an hour.

De Blasio also ran a four-month 2020 presidential campaign before dropping out in September 2019. 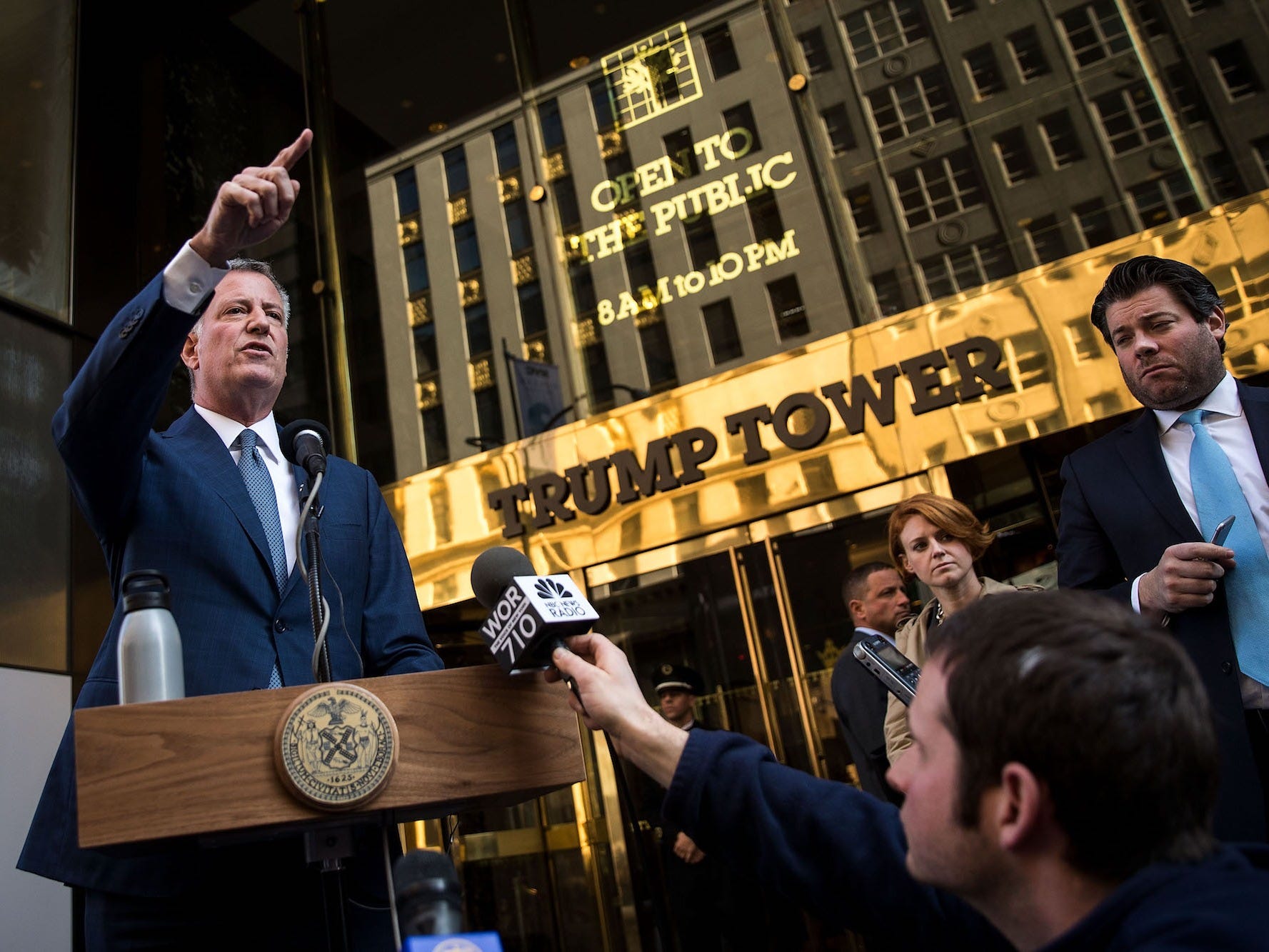 De Blasio ran as a democratic candidate for president of the United States in 2020. He dropped out of the race in September 2019 after failing to gain enough campaign support.

“I have reached the point where I feel I have contributed all I can to this Democratic primary,” he wrote in an op-ed article for NBC News.

During his presidential campaign, de Blasio focused on the working class and beating President Donald Trump.

During his time as mayor, de Blasio has been subject to repeated public scrutiny. He received criticism for how he handled the Eric Garner case in 2014, where a white police officer killed a black man in Staten Island after apprehending him for selling loose cigarettes. 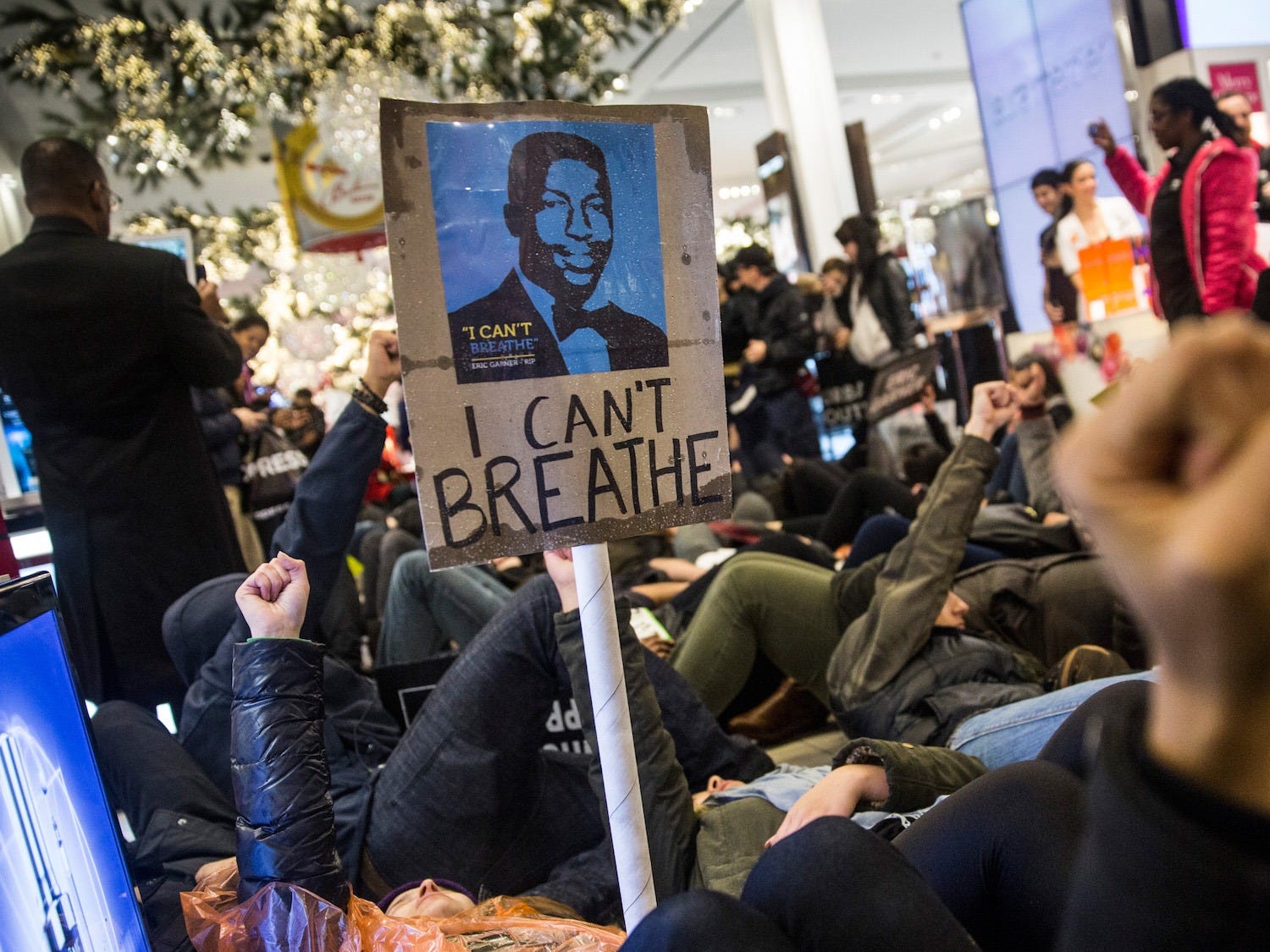 In 2014, Eric Garner died after Daniel Pantaleo, a former New York City police officer, put him in a chokehold on Staten Island. Officers approached him to see if he was selling single cigarettes.

Garner said “I can’t breathe” 11 times during the incident, which was caught on video.

During his 2020 presidential campaign, before Pantaleo was fired, protesters criticised his handling of the case, saying the officer should be fired.

When asked about the Eric Garner case from 2014 in a coronavirus update on May 29, de Blasio said, “We made a mistake. I made a mistake in believing the Department of Justice would do its job.”

“When the city took over, there was due process, there was a trial. Our police commissioner made a decision. It was the right decision. The thing I feel very clearly, in retrospect, is we should have ignored the Department of Justice – because what they did was unconscionable in not acting – and just moved ahead. And that’s what we will do from now on.”

De Blasio has been criticised for his response to the coronavirus pandemic. 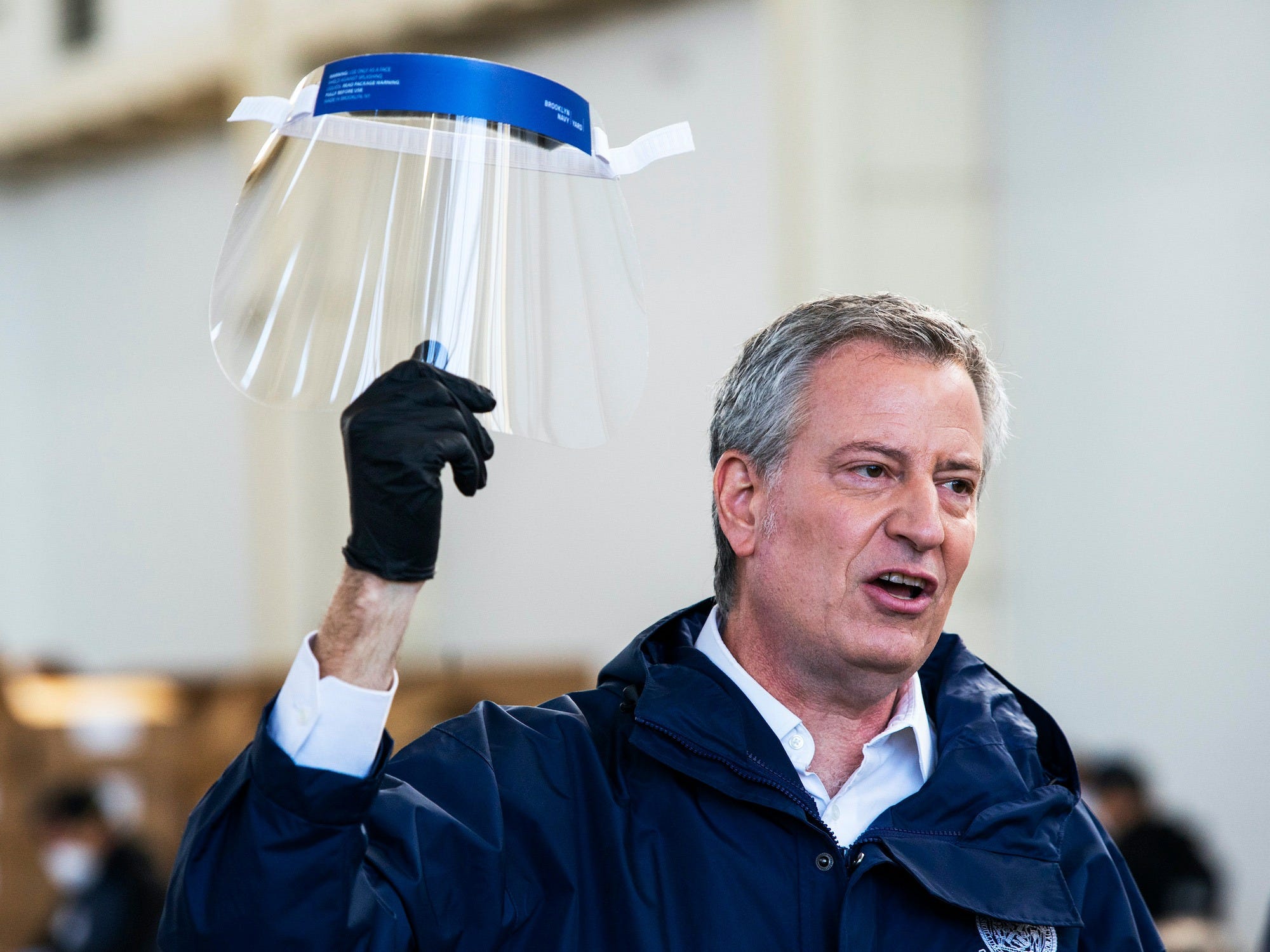 During what New York Magazine called his “worst week as mayor,” the second week of March 2020, de Blasio hesitated to close down New York’s public schools in reaction to the spread of the virus.

He’s also been criticised for spreading misinformation about the virus, including that the US didn’t know the virus could spread asymptomatically until April. According to fact-checkers at CNN, the Centres for Disease Control first said that asymptomatic transmission of the coronavirus was possible in February.

“It’s really important for New Yorkers to understand that based on what we know right now, it’s important to just go about your lives, continue living as you have,” de Blasio first said at a press briefing about the virus on January 24. He made similar comments on March 13.

De Blasio has been married to his wife, Chirlane McCray, since 1994. They have two children: a 25-year-old daughter, Chiara, and a 23-year-old son, Dante. De Blasio’s family has been at the centre of his political campaigns. 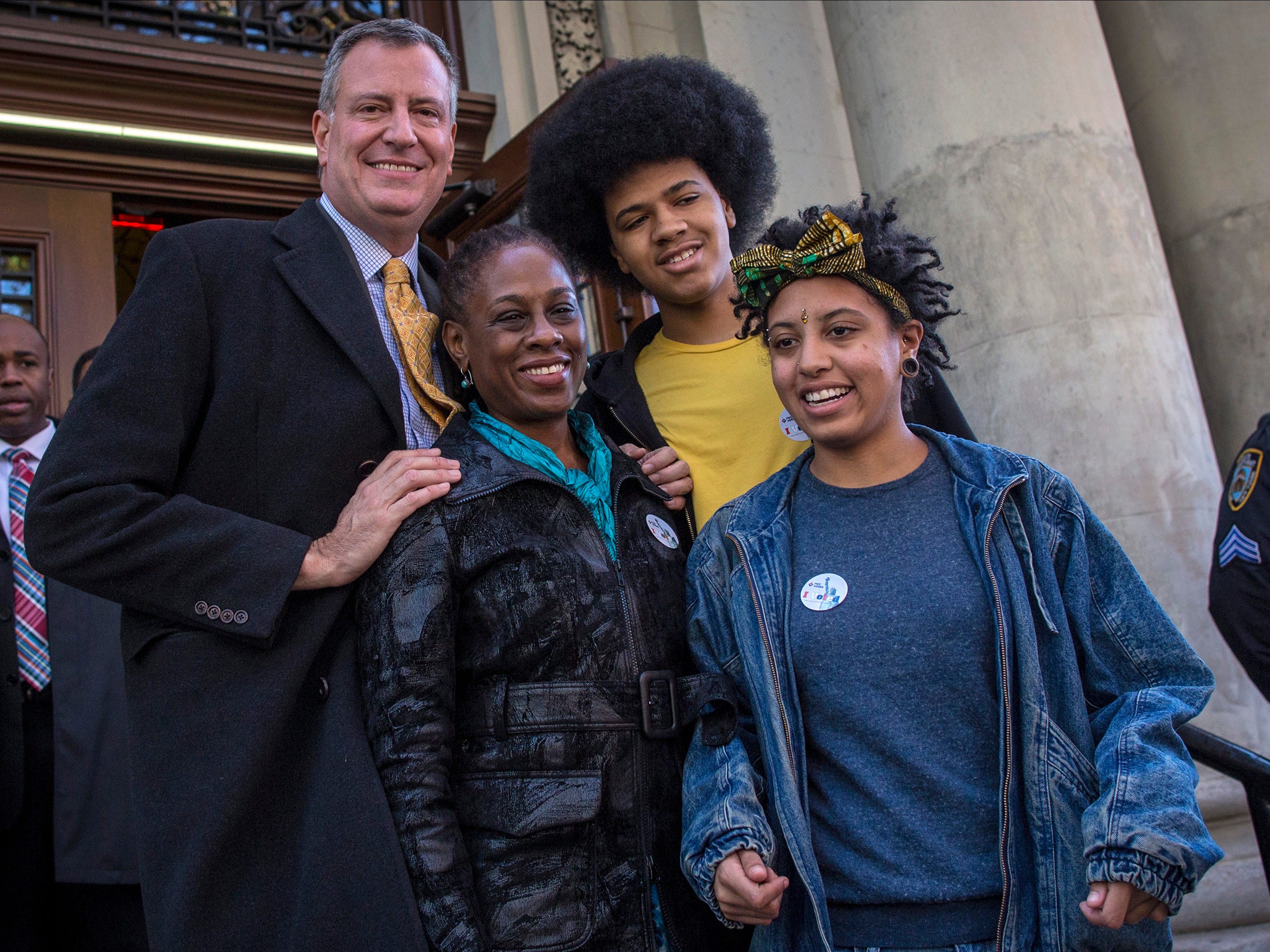 REUTERS/Brendan McDermidBill de Blasio and Chirlane McCray, and their children, Dante and Chiara.

In 2013, McCray told the New Yorker that she met de Blasio at City Hall in 1991. At the time, she was a speechwriter for Mayor David Dinkins and he was a deputy mayor’s aide.

De Blasio is Italian and his wife, Chirlane McCray, is black. De Blasio has talked about his biracial family in reference to social reform in various campaigns.

The de Blasio family moved into Gracie Mansion in 2014. 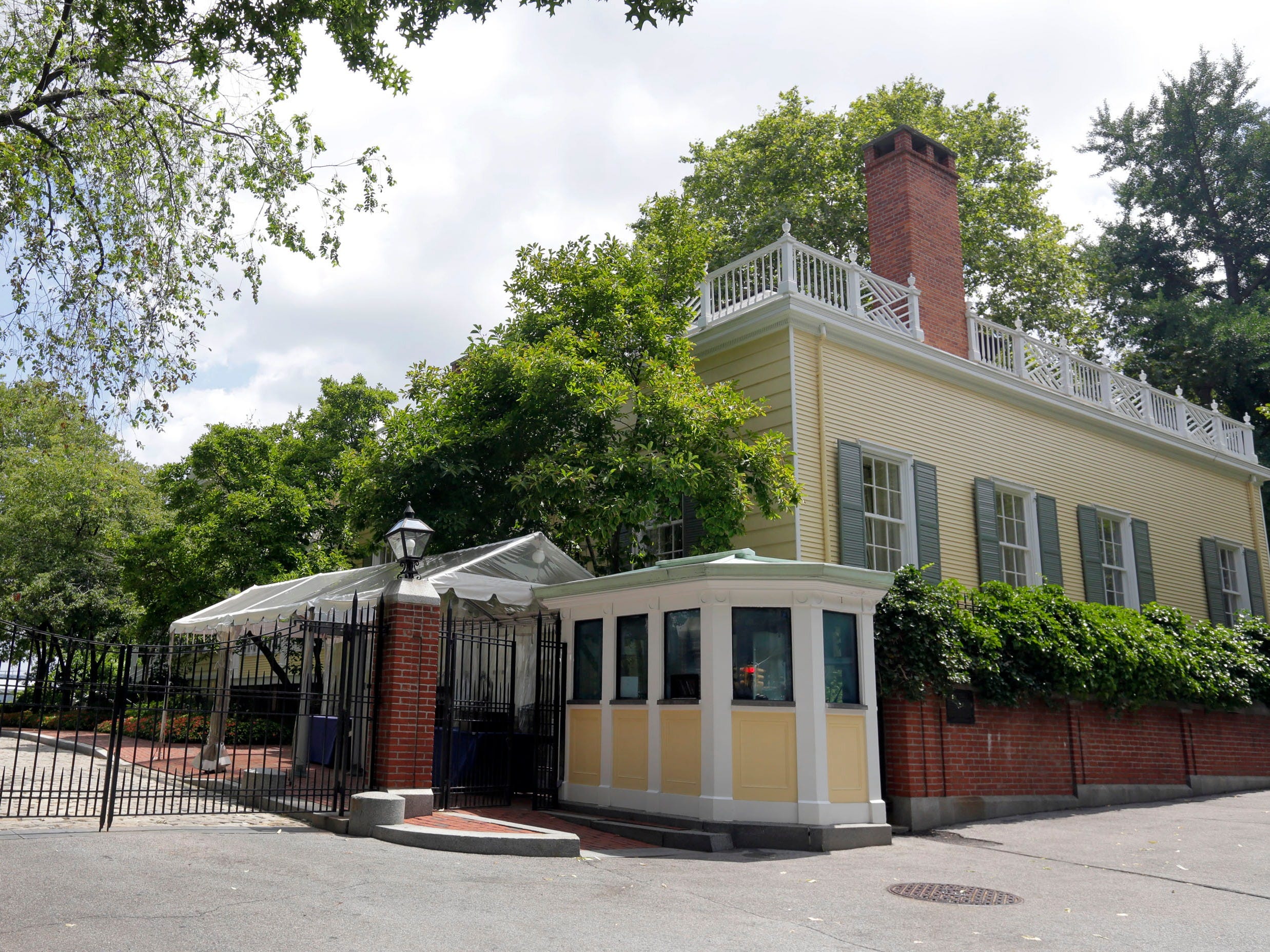 AP Photo/Richard DrewGracie Mansion on the Upper East Side

Following his win, de Blasio and his family moved into Gracie Mansion, which is the official house of the mayor of New York. It is located in the Yorkville neighbourhood of Manhattan.

In 2019, de Blasio and his wife reported a joint income of $US252,178 according to their income tax returns. They gave about $US1,200 to charity and another $US1,300 to Housing Works, an NYC-based non-profit committed to fighting homelessness and AIDS.

Chirlane McCray has been instrumental in creating a mental health plan for the city during her time as the First Lady of New York City. 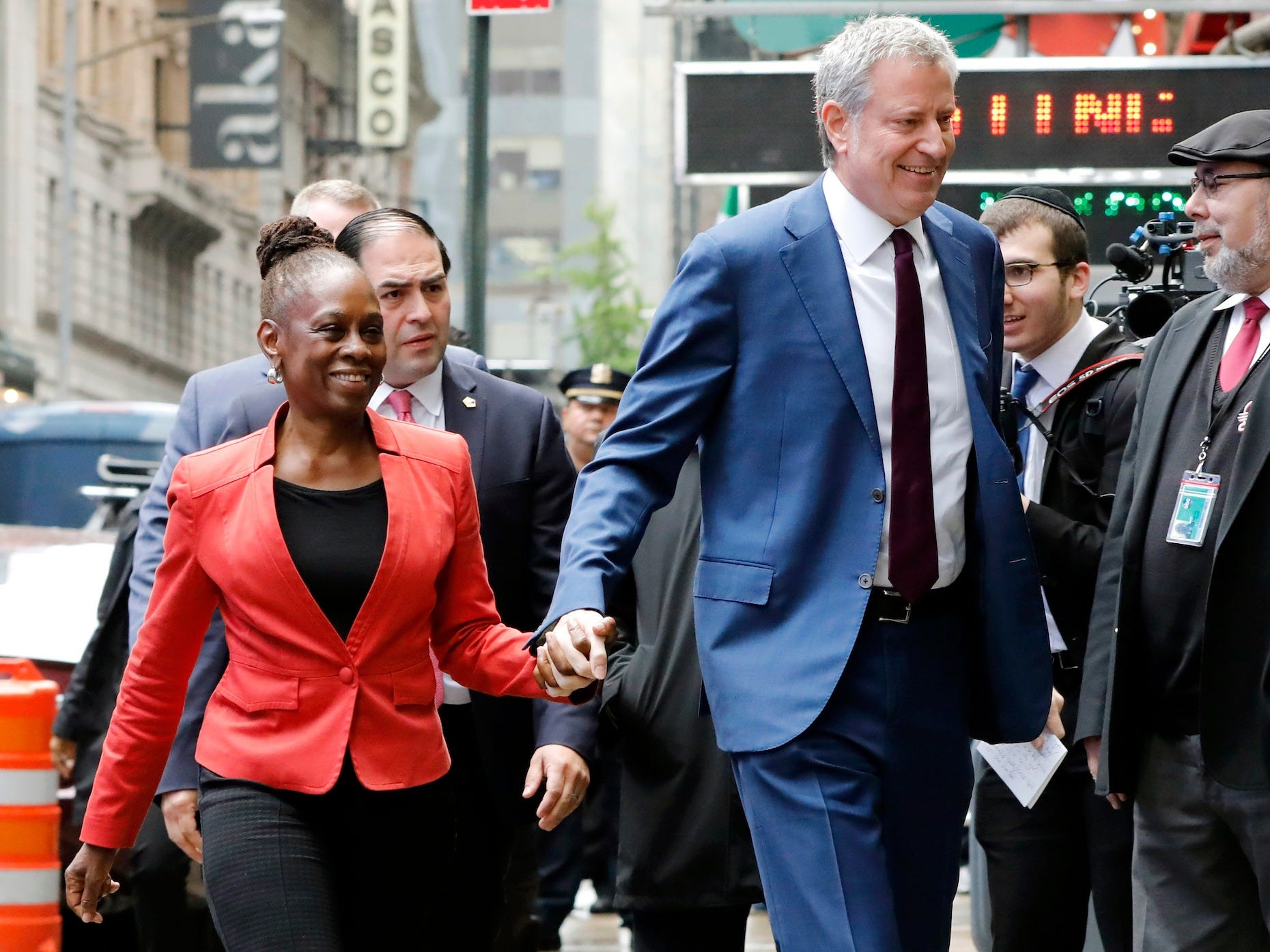 McCray went to Wellesley college for English. After college, she moved to New York and worked as a writer in the magazine industry.

In 2015, McCray developed ThriveNYC with the purpose of connecting people with mental health needs to the people and the programs that can help them. Ultimately, the program aims to make mental healthcare more accessible.

In 2018, McCray was named one of TIME’s 50 Most Influential People in Healthcare after it became a worldwide model for mental health reform.

Dante de Blasio helped his dad with his first mayoral campaign when he was 15. 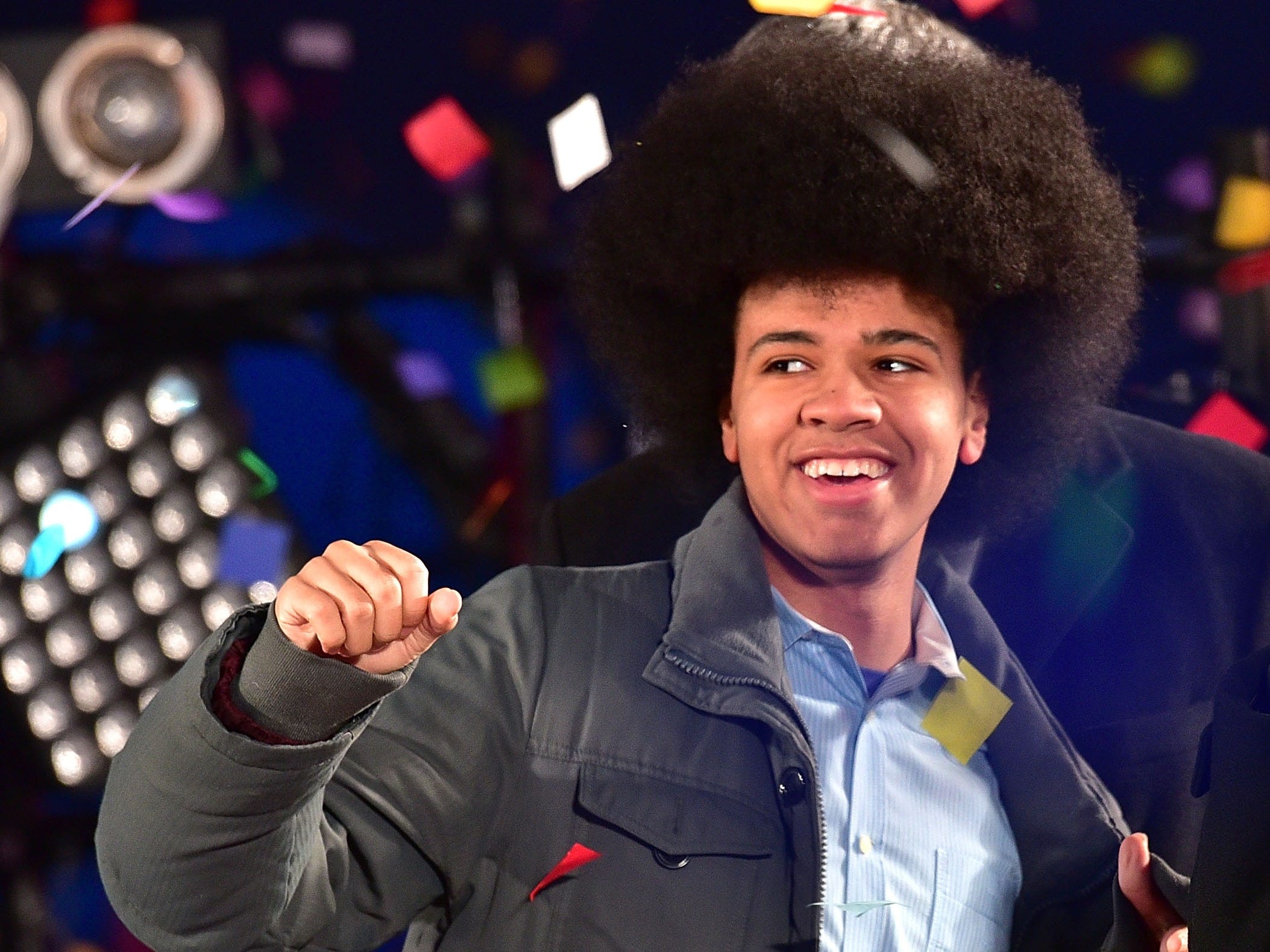 Years later, Dante wrote an op-ed article for USA Today. The 2019 article detailed his perspective of and experience with police as a young black man. The piece was published shortly after Dante graduated from Yale University and recalled two memories – one of de Blasio and Dante’s cousins explaining how he should talk to police officers at age 13, and another of Dante feeling afraid of police officers as a young adult.

Chiara de Blasio studied sociology at Santa Clara University and has been working as a program coordinator of Feminists for Justice at Santa Clara Community Action Program since 2015. 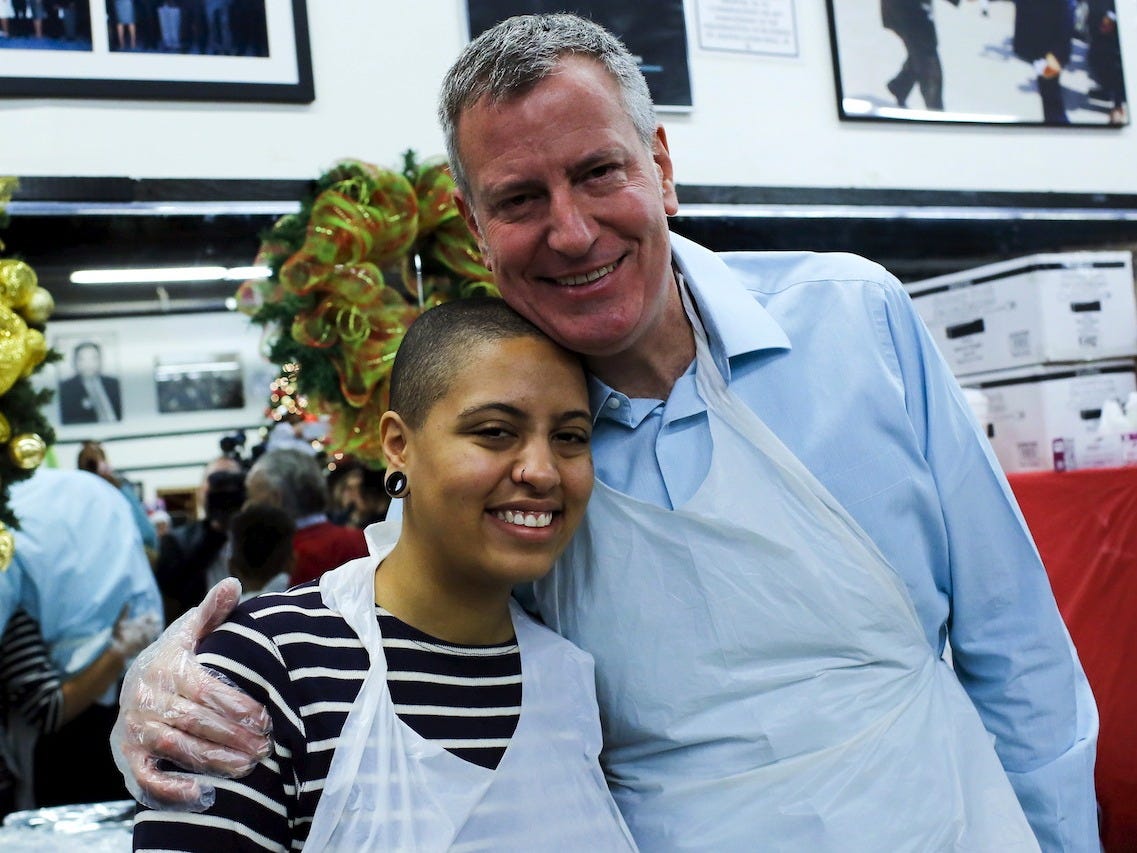 Chiara went to Beacon High School, a selective public high school in Manhattan, and Santa Clara University, according to her LinkedIn profile.

Most recently, de Blasio has defended the New York City Police Department’s treatment of the protesters who have taken to the streets after George Floyd, a black man, was killed in police custody in Minneapolis, Minnesota, on May 25.

A video showing an NYPD car driving into a crowd of protestors in Brooklyn was circulated widely on social media over the weekend.

De Blasio told New York 1 that although he wishes police officers hadn’t driven an NYPD car through a crowd of protestors on Flatbush Avenue and St. Mark’s Avenue in Brooklyn, “they were in a situation where it was getting more and more dangerous, and they had to get out of there.”

On May 30, his daughter, Chiara, was arrested during a protest. 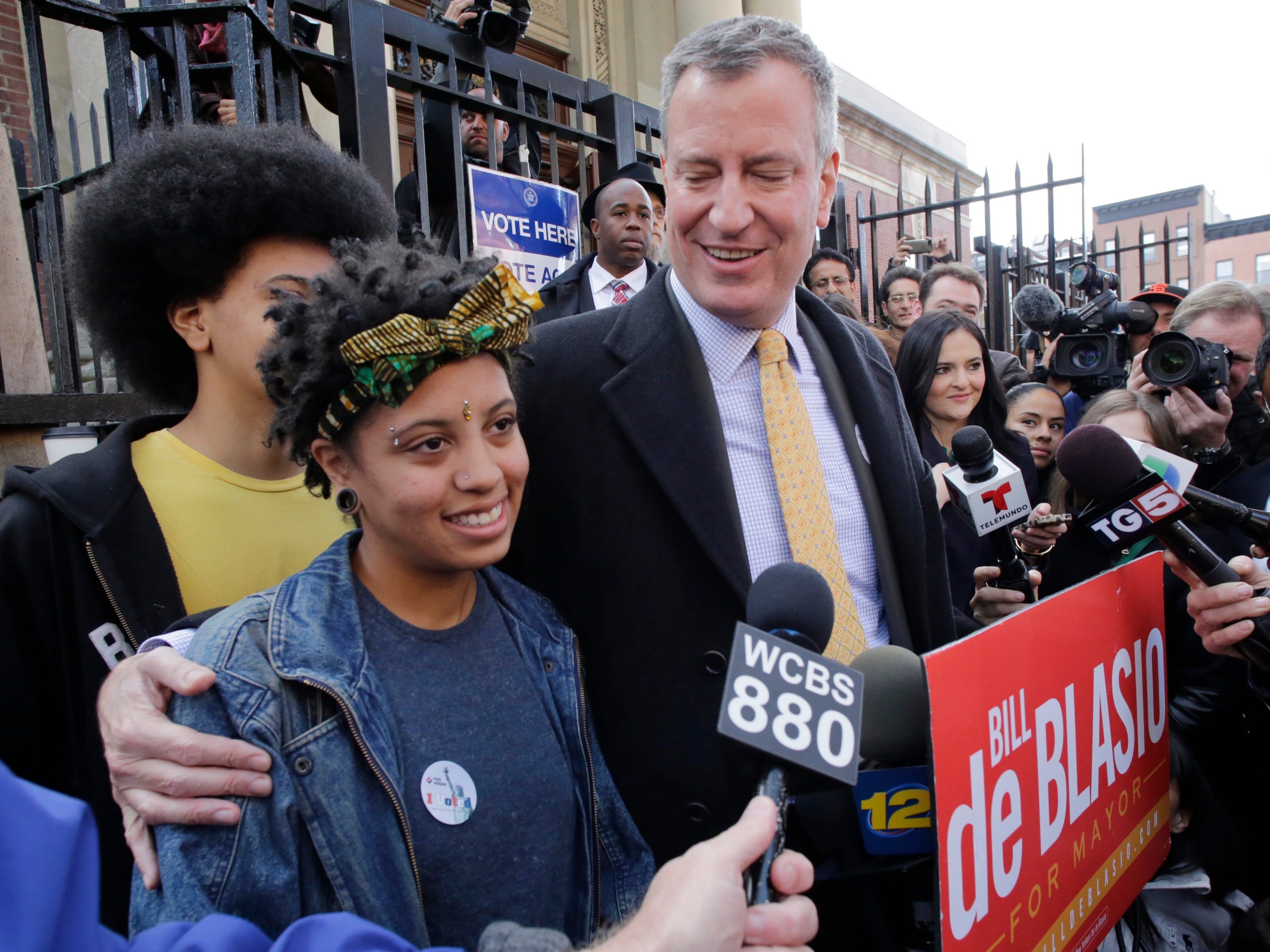 She was released on a desk appearance ticket, or DAT, which requires her to appear in court at a future date.

The New York Post reported that she was blocking traffic and refused to move.

“This is not someone who would ever commit any violence,” he said. “She was very clear, she believes she was following the instructions of police officers and doing what they were asking.”