An inventor wants to use his 3,000-kilogram mechanical exosuit in a human-powered racing league

If you’re a fan of science-fiction, you’ve probably seen something like the Furrion Prosthesis before.

Characters in films from “Aliens” to “Avatar” have been strapping into walking, human-powered exoskeletons for decades.

And now Jonathan Tippett, a Canadian artist and inventor, says he has perfected his real-life “mech.”

“We wanted to create an experience for the human pilot. The whole project started as creating a new human experience,” Tippett told Business Insider Today.

His vision is to build a fleet of 3,000-kilogram exo-suits and launch a new high-octane, low carbon sports league called X-1 Mech Racing.

“The main driver is just the passion for a future where giant mechs are sprinting around huge stadium courses, going head to head over obstacles,” Tippett said.

Since this summer, he’s been training potential pilots at his ranch about an hour’s drive outside Vancouver.

“I describe Jonathan as the backwoods Tony Stark. Through the years he’s invented some pretty amazing technology, but the mech definitely takes the cake.”

His invention is “powered by technology, inspired by art.” 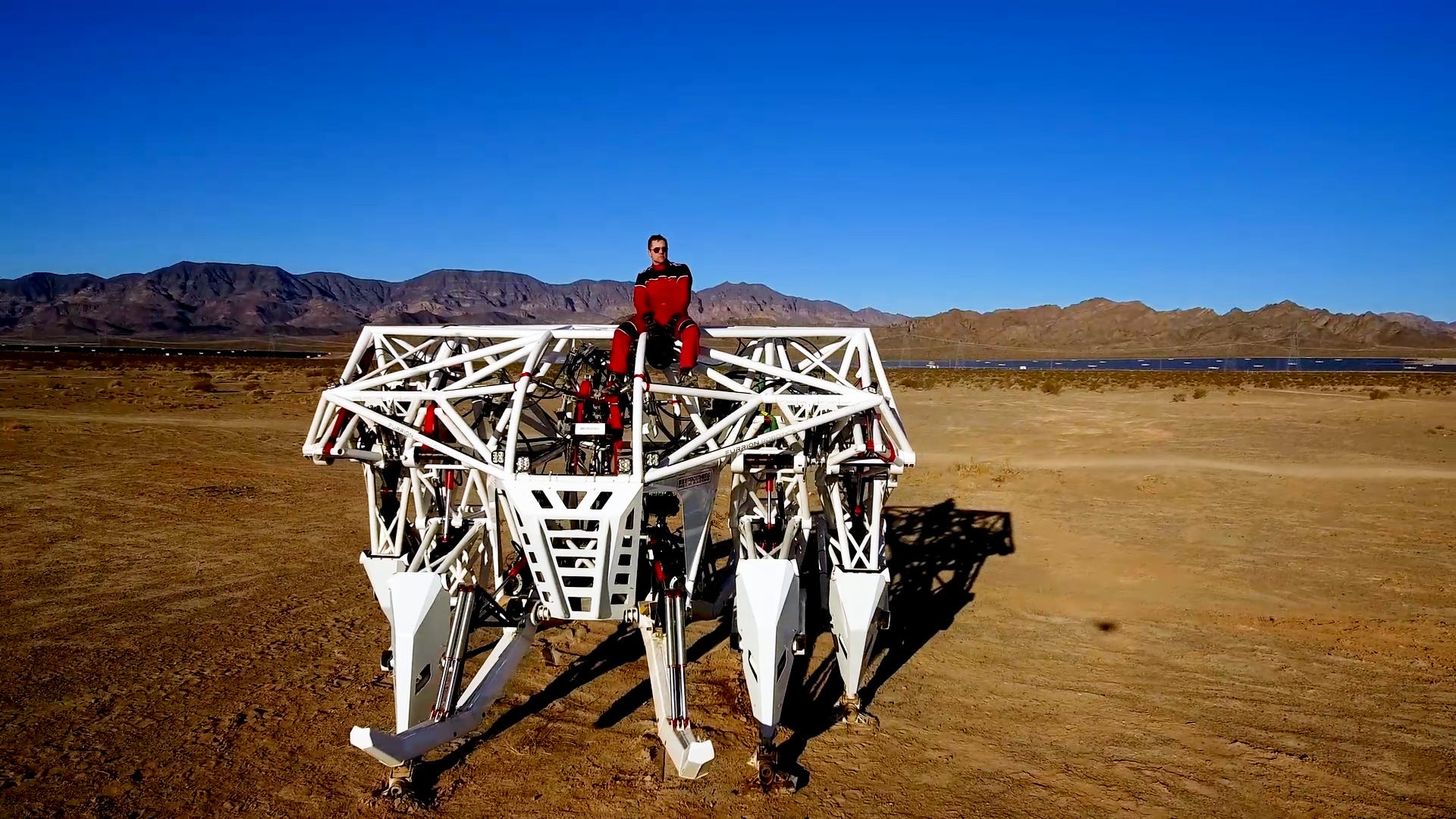 Prosthesis started as an art installation at the Burning Man festival in the Nevada desert 14 years ago, and has evolved considerably since then.

Sometimes Tippett’s vision was a step ahead of reality â€” “it became immediately apparent that there was going to be a lot of falling over,” he said.

Tippett’s first mech had eight legs instead of four. He called it the “Mondo spider.” Then Tippett and his team of volunteers decided they needed to perfect the mechanics of just one leg.

“When you really got it rolling, you were jumping back and forth in this giant 10-foot-tall tower with this exoskeleton-controlled leg. And that was the platform we used to develop the motion-control technology,” said Tippett.

The technology inside Prosthesis is a combination of standard industrial components and parts engineered by Tippett’s team. The frame is made from a high-performance steel alloy common in race cars and aerospace vehicles. Racing-grade shocks are the same you’d find in an off-road truck.

And Prosthesis is 100% electrically powered. Its nearly 800-pound battery is protected from the elements and can run the mech for about an hour on a single charge.

And soon he was taking the mech on the road. 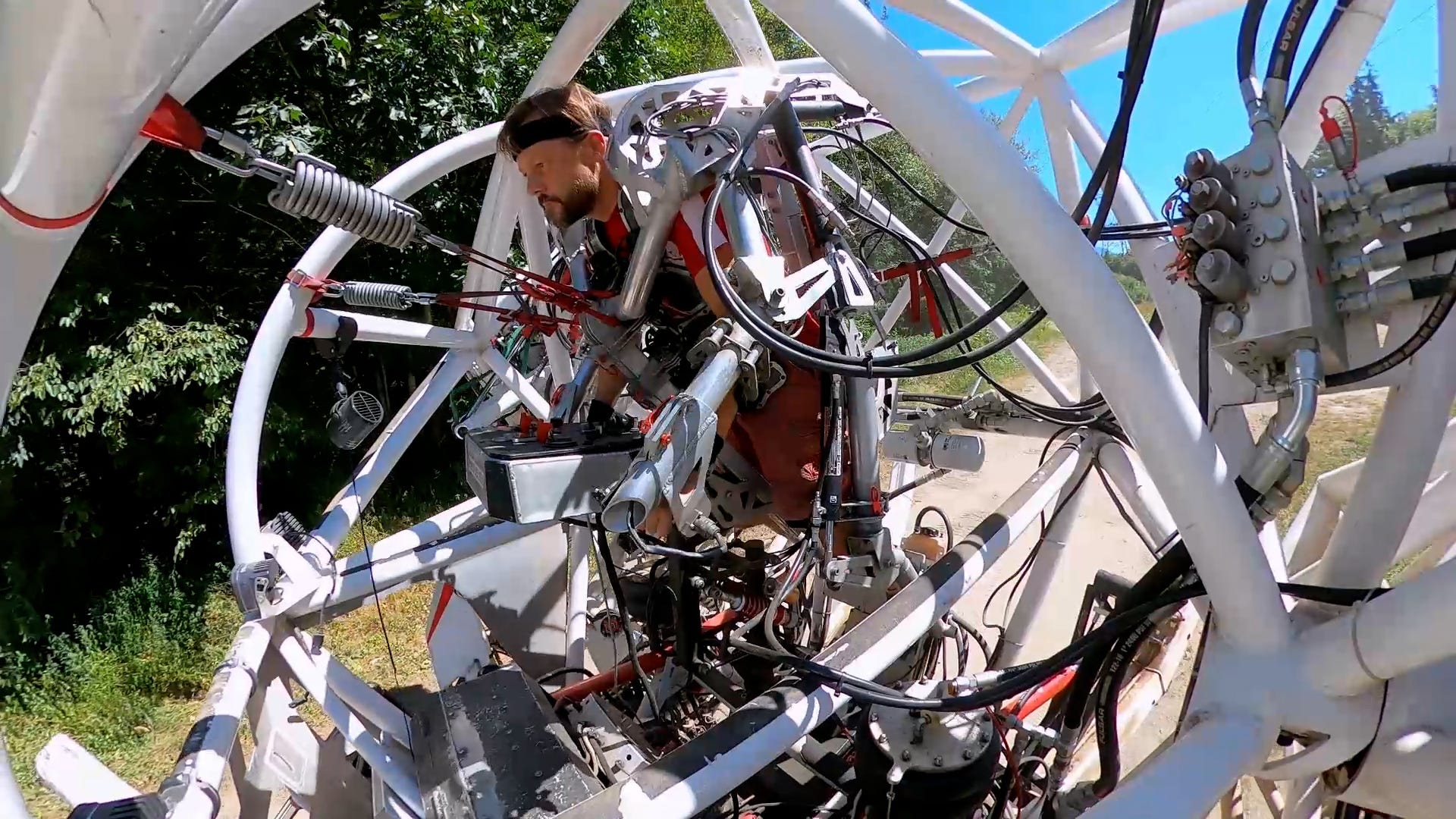 Furrion Ex-BionicsTippett dreams of training pilots to compete in a mech racing league.

Like the technological wizards of a different era, Tippett took his creation on the road to Maker Faires and trade shows.

The mech also got a lot of publicity at CES in Las Vegas, though not all of it was positive.

“People couldn’t quite make the imaginative leap from what we had, which was just this sort of barely shuttering machine to these, you know, loping, live, agile machines that I was envisioning,” said Tippett.

In 2017, Prosthesis got an investment from Furrion, a technology company that makes home appliances, but also designs concept vehicles like Elysium, an RV with a helipad, and Adonis, a luxury yacht with an AI concierge.

But mech racing is still far from becoming a sport. Prosthesis is still the only mech of its kind.

“It would probably cost about $US1.5 million to $US2 million to reproduce this thing just as it is,” said Tippett.

And any new pilot must complete a training lasting three or four days just to grasp the basics, and much longer than that to master the controls.

Given these limitations, you probably won’t be watching mech racing on television any time soon. And Tippett is not aggressively pursuing other commercial applications, like deploying mechs on a construction site.

But other tech-enabled sports have sprung up in recent years, including drone racing leagues and the popular “BattleBots” show.

So far, Tippett’s mech has surmounted financial troubles, bad publicity, and even a global pandemic. But nothing can stand between this man and a future filled with human-powered exoskeletons.

I get goosebumps talking about it. It’s going to be so amazing,” he said. And we have the technology. And now we are so many steps closer, and people are starting to realise how exciting that’s going to be.”

“So stopping doesn’t even cross my mind.”