The coronavirus is already having a massive impact on the way Americans get their meat â€” and even bigger changes could be coming in the future.

And while four giant meat companies control 80% of the United States beef market, it’s small, mum-and-pop meat processors that are looking to benefit the most.

Since the pandemic began, COVID-19 has made more than 40,000 meat industry workers sick, killed more than 200, and led to shutdowns of major factories and shortages at grocery stores, exposing the fragile nature of America’s meat supply chain.

In early May, the US Justice Department launched an antitrust investigation into the four biggest meat companies â€”Tyson Foods, JBS, Cargill, and National Beef. In addition to controlling the market by their sheer size, these companies have also been accused of price-fixing and collusion in several civil lawsuits.

At the same time, small-scale meat processors in the US have seen a huge spike in demand as consumers search for alternative meat sources.

“Small and very small slaughter facilities are being out-competed by the large companies. And a large section of the industry has the very deep pockets â€” they can out lobby the small side,” Michael Fisher, a retired inspector with the US Department of Agriculture, told Business Insider Weekly.

“That’s sort of reality. But COVID shined a light on the downside of that reality.”

At one collective of farmers, the Grass Roots Farmers’ Cooperative, meat sales have more than doubled since the start of the pandemic.

Farmers in the co-op get their animals slaughtered at the Cypress Valley Meat Company in rural Arkansas and then sell to consumers online.

“We’ve really lost most of the mid-scale players,” said Rebecca Thistlethwaite, director of Oregon State University’s Niche Meat Processor Alliance Network. “And so we’re left with a system that is kind of the tiny artisan producers and processors with premium quality and expensive meat and, you know, sort of the inexpensive, cheap, mass-produced meat.”

The US has challenged its most powerful meat companies before. 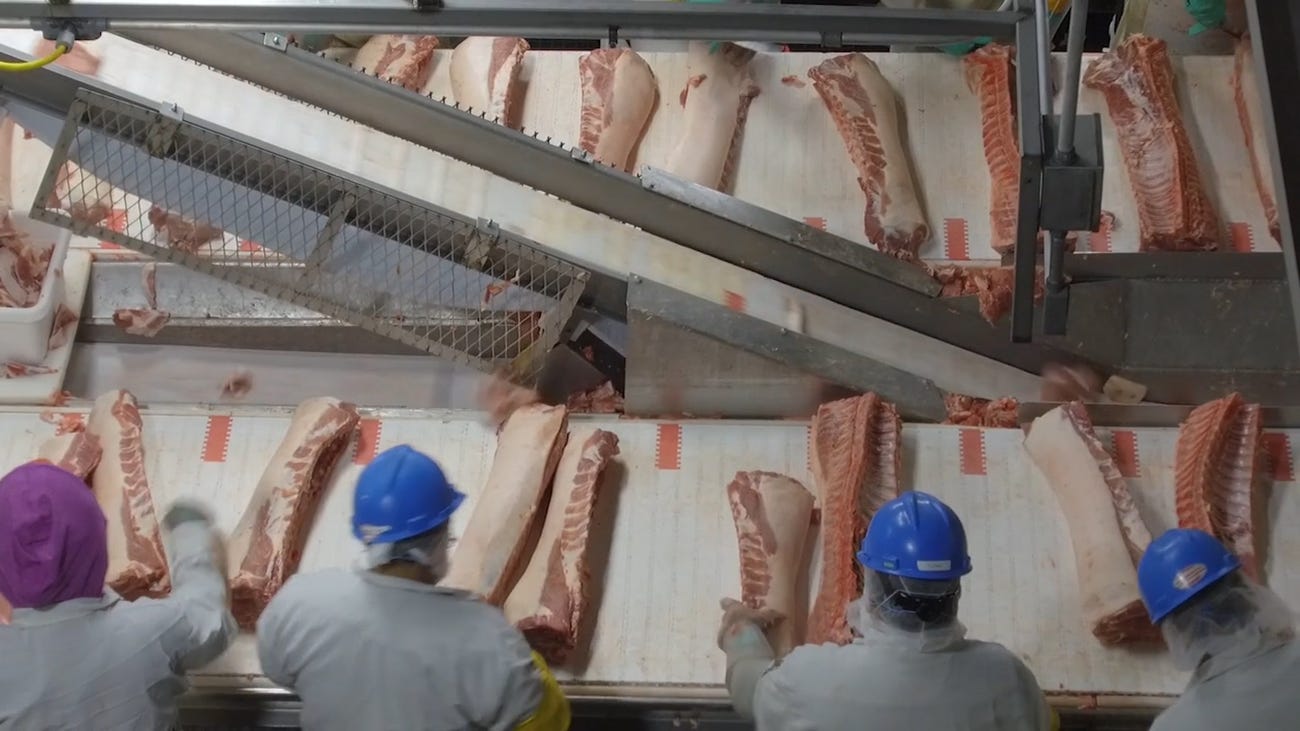 Getty ImagesIn the factories of the biggest meat producers, workers stand closely together on assembly lines.

The Justice Department’s investigation launched in May is not the first time the government has challenged America’s most powerful beef companies.

In the aftermath of World War I, five companies controlled the American meat supply chain by owning feedlots, railcars and railyards, stockyards and slaughterhouses, refrigeration plants and distribution centres.

Also like today, there were concerns about price-fixing, leading President Woodrow Wilson to order an antitrust investigation. The 1920 Packers’ Consent Decree broke up the five companies’ grip on the supply chain and made room for independent ranchers and rural slaughterhouses to flourish for nearly 50 years.

But it wouldn’t stay that way. In 1967, one of the biggest companies at the time, Iowa Beef Packers, introduced “boxed beef.” Instead of just slaughtering cows and sending them on to grocery stores, the business started cutting and vacuum-packaging the meat right at the slaughterhouse.

Grocery stores and consumers loved the convenience, and by the late 1970s, it had become the industry standard. It was also the beginning of a reconsolidation in the industry.

The meat packers had spent decades challenging the 1920 law that protected smaller producer until it was overturned in 1981.

Hopkins and Todt, the Grass Roots founders, were just children then, but the jobs they ultimately chose had largely disappeared by the time they grew up.

“There was a mentality, and there still is, of get bigger, get out of agriculture,” Hopkins told Business Insider Weekly. “And so farmers like myself or other farmers around the country have gone out and created our own market.” 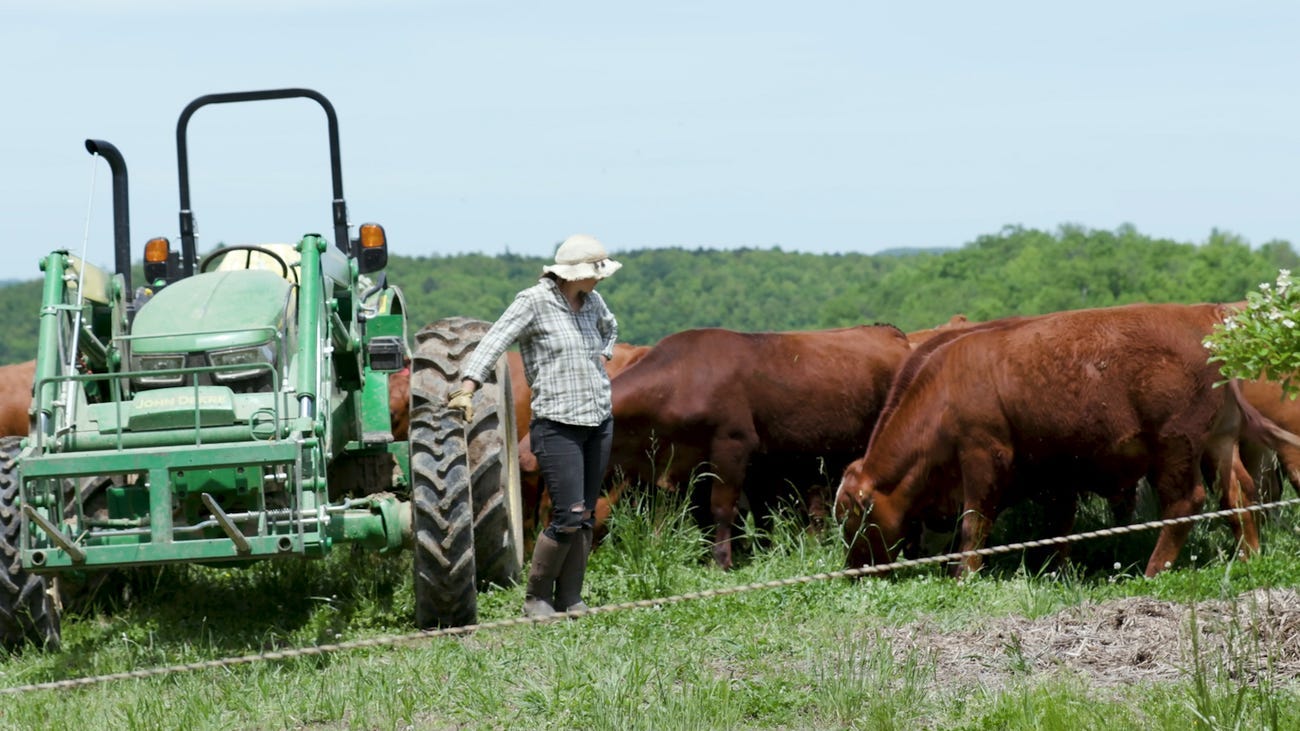 As the coronavirus spread across the United States in the spring, and large processing plants became short-staffed, beef prices at grocery stores soared. In April, ground beef prices were 10% higher than they were a year earlier, according to Labour Department statistics.

Meanwhile, prices for live cattle dropped around the same time,according to the Wall Street Journal.

A group of state attorneys general didn’t think the price drop was just because of slowdowns at the big plants. They asked President Donald Trump to start the Justice Department antitrust investigation that is now underway, calling for “regulatory strategies â€¦ to promote competition, address market manipulation and protect consumers.”

That means keeping cattle and beef prices fair and steady, making it easier for small slaughter companies to open up shop and keeping the big ones from buying them out.

At nearly $US10 a pound, grass-fed ground beef produced by Grassroots sells for about twice as much as grain-fed beef at a major grocery store. That makes it unaffordable for many customers. Hopkins said the higher prices are because they spend more on farmer wages, environmental costs, welfare costs, and other factors.

As long as American consumers demand cheap meat that’s available year-round, there will always be a need for large meat producers, Thistlethwaite said.

“But it’s quite possible that the American consumer could change their tastes, just as they have moved from wanting to buy gigantic cars, you know. They’re increasingly moving to smaller cars and electric cars.”

But still, on principle, Cody is wary of his business growing too big.

“I’m not sure what I would do if Jeff Bezos called me,” he said, laughing. “It’s a slippery slope. We feel â€¦ pretty strong about keeping that direct connection with our customers.”