6 McDonald's workers say they were pressured to work despite being infected in Chicago COVID cluster, according to new OSHA complaints 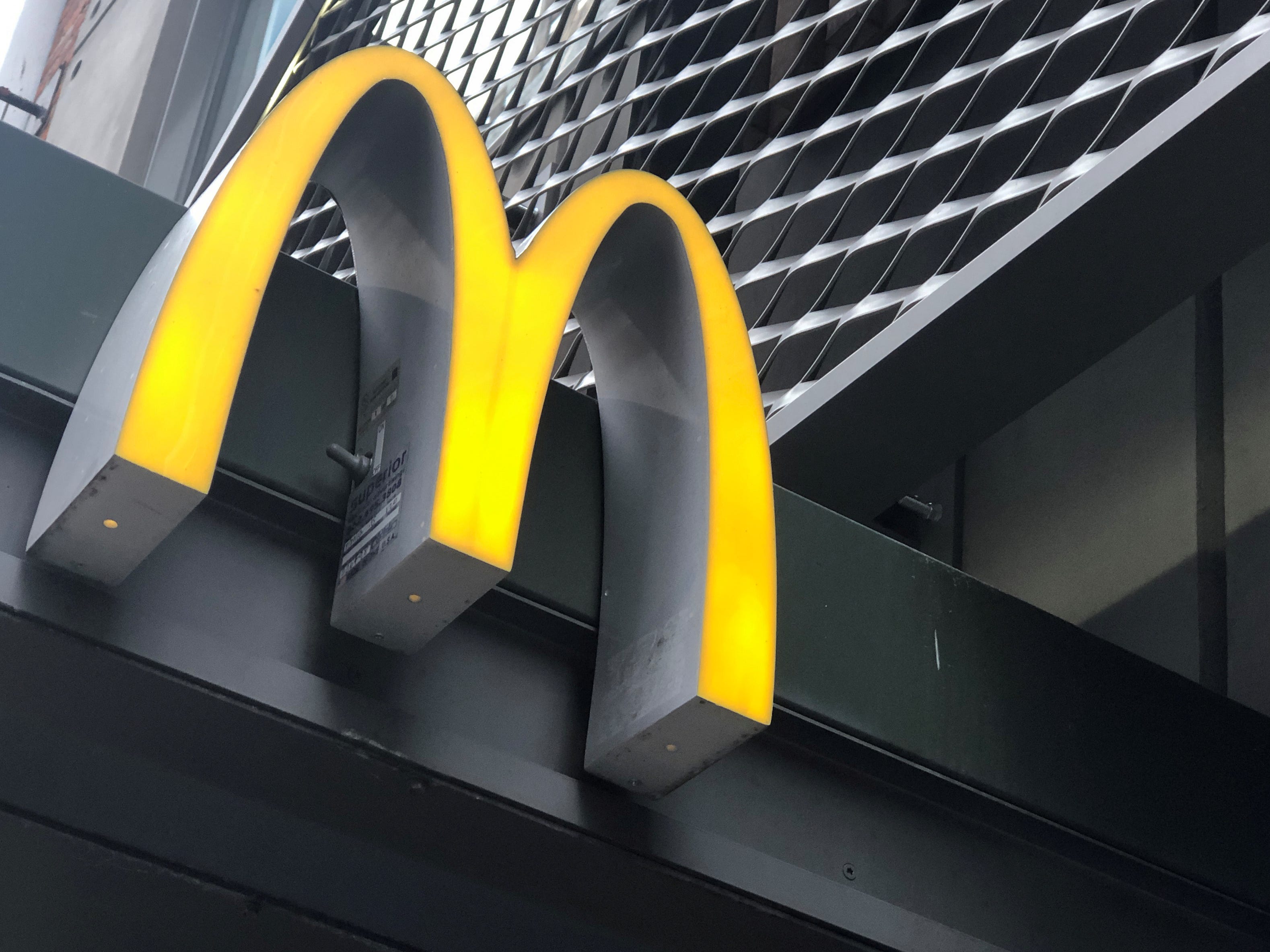 ReutersMcDonald’s workers filed OSHA complaints in two states against the company on Friday.

Two new OSHA complaints allege that workers are being pressured to continue working at a Chicago McDonald’s, after six employees caught the coronavirus. According to one worker, the incident comes after two McDonald’s employees died from COVID-19.

A complaint filed on Friday by McDonald’s worker Kenia Campeando alleges that store managers dismissed employee reports of COVID-19 symptoms, failed to sanitize or enforce social distancing, and did not provide personal protective equipment to workers. McDonald’s failures contributed to a cluster of cases that sickened six workers at a single store, according to Campeando.

Campeando said she started showing symptoms of COVID-19 two weeks ago after five of her coworkers became ill. In some cases, those employees continued coming to work after alerting managers of their symptoms. In other cases, workers were pressured to return to work before they produced the required number of negative COVID tests and were misled about how much time they could take off, according to the complaint.

Campeando said that she has been quarantining since October 11, but that her manager has told her he will not honour two weeks’ worth of paid sick leave.

“I am still sick and am afraid that if I refuse to go back to work while I am contagious, my manager will retaliate against me,” Campeando wrote. “This forces hourly employees such as myself to choose between earning a much-needed paycheck to cover my living expenses or self-isolating at home, with no pay, to possibly prevent the spread of a highly contagious disease.”

On Monday, Adriana Sanchez â€” Campeando’s coworker â€” filed a separate OSHA complaint about the same McDonald’s location, saying employees have been forced to come to work when sick and contagious. Both complaints said it is impossible to enforce social distancing in the small location, and that their employer has failed to provide personal protective equipment for workers.

“These practices are unacceptable and undoubtedly contributed to the sudden surge in COVID-19 cases at my store,” Sanchez wrote.

Sanchez previously filed an OSHA complaint in July, saying that McDonald’s failed to provide adequate masks and enforce social distancing. According to Sanchez, OSHA responded with an informal investigation that consisted primarily of reviewing photos provided by her employer. Sanchez is requesting that OSHA inspect the McDonald’s location.

Carmen Solano-De Carrier, the franchisee who owns and operates the Chicago location, said in a statement to Business Insider that she is troubled to hear these allegations. According to Solano-De Carrier, the location practices social distancing, universal masking, and ensures an “ample supply” of soap and sanitizers.

“We ask all of our employees to stay home when sick, and we are offering paid sick leave to those impacted by the virus,” Solano-De Carrier said in a statement. “In the event an employee tests positive, we have contact tracing processes in place to identify and communicate to all colleagues that may have come in close contact, and we close the restaurant for a deep cleaning procedure.” Campeando’s complaint also details two deaths related to the Chicago store, though it’s not clear if they’re directly tied to the current cluster of cases. According to Campeando, two workers who float between her store and other McDonald’s locations owned by the same franchisee have died due to COVID. Campeando said the death provides a clear sign that the virus can be deadly for workers.

“Their families did not even have the money to pay for a burial,” Campeando wrote.

A McDonald’s employee in San Jose, California filed a similar complaint on Friday. According to the CalOSHA complaint, workers at the San Jose location are being written up if they stay home sick, a practice that predates the pandemic. Managers told the worker that they did not know if she would be paid to quarantine, even after alerting her that multiple coworkers had COVID-19, according to the complaint.

“I was scared and angry when workers kept coming to work sick,” the CalOSHA complaint reads. “I would try to keep distance from them and made sure to wear my mask, but there is only so much you can do the way the store was set up.”

“I am mad that McDonald’s forces people to come to work sick,” the complaint continues. “They provide masks and gloves, but the most important thing of all is to make sure people feel comfortable staying home if they are sick, encouraging them to report symptoms and making clear they will get sick pay.”

Daniel Borba, the franchisee who owns the San Jose location, said in a statement that he is “disappointed” by the allegations and that the restaurant has enhanced safety protocols during the pandemic.

“We have been working in close partnership with the Santa Clara Health Department and public health experts to continuously enhance safety protocols as we learn more, and the Health Department closed its investigation into our restaurant this weekend (Nov. 1) after confirming it had been more than 28 days since any employee had reported symptoms or a positive case,” Borba said in a statement.

Workers behind all three complaints are working with Fight for $US15 representatives. Fight for $US15 is the Service Employees International Union-backed movement focused on raising the minimum wage and unionizing fast-food workers.

Companies are seeing backlash for their pandemic policies 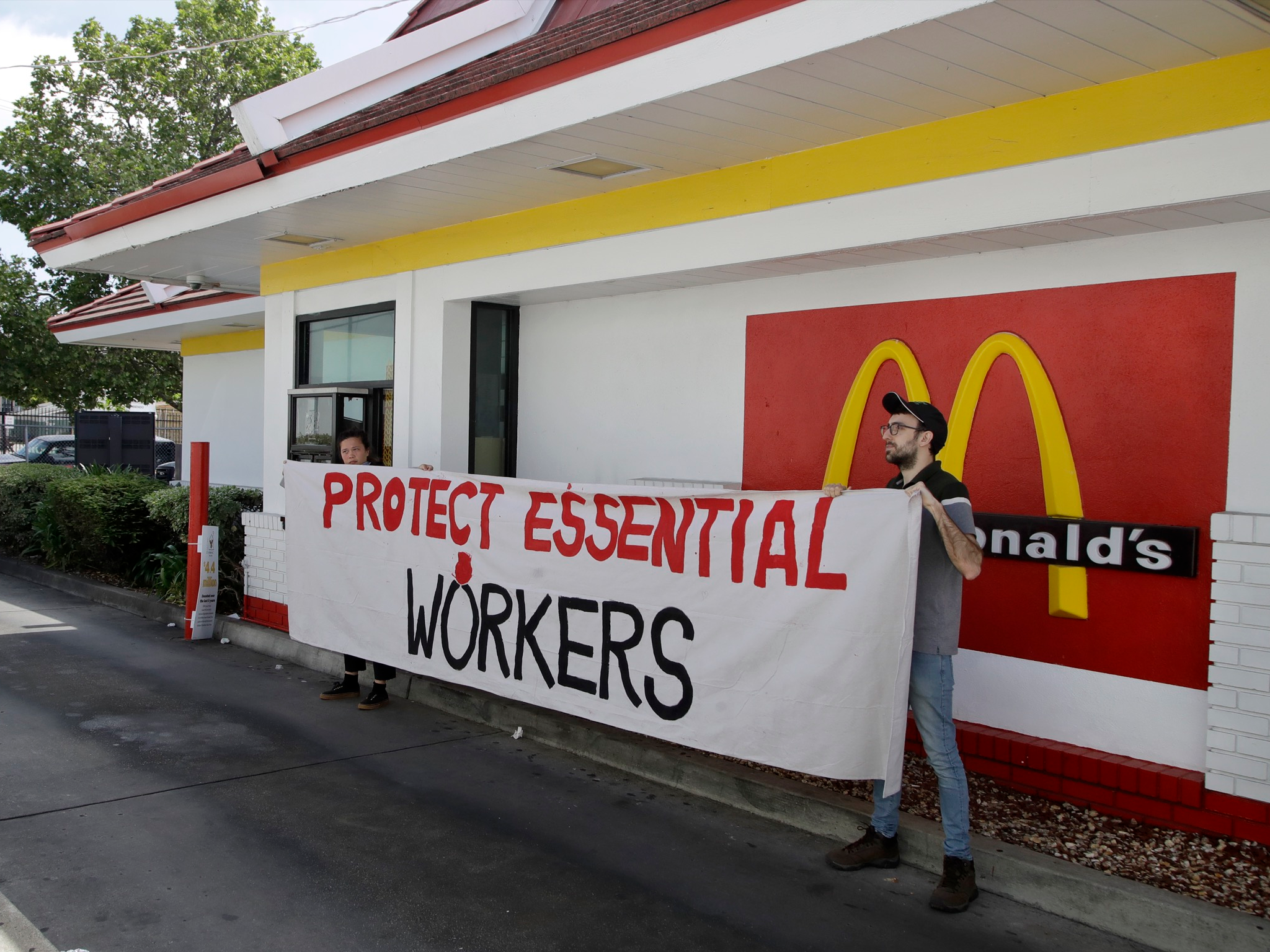 AP Photo/Ben MargotMcDonald’s has seen backlash throughout the pandemic.

Earlier in October, Maria E. Ruiz Bonilla filed a whistleblower retaliation suit against McDonald’s, alleging the company fired her after she complained about unsafe work conditions during the pandemic.

“I was afraid, of course. I was thinking about losing my job,” Ruiz told Business Insider through a translator. “But, at the same time, my fear of getting sick with COVID and dying was bigger.”

Read more: A McDonald’s worker accuses the chain of firing her after she protested against a lack of masks and other safety concerns in a new whistleblower lawsuit

Ruiz is not alone. The National Employment Law Project found workers had filed 1,744 COVID-19-related retaliation complaints from March to early August. However, only 2% of the complaints had been resolved, according to the NELP. More than half were closed or dismissed without investigation.

Business Insider’s Catherine LeClair and Ãine Cain reported that some workers felt that they had been deserted by workplace safety organisations like OSHA, as politicians pushed to protect workers from lawsuits. However, that may be beginning to change.

OSHA has made some high-profile citations recently, including fining Amazon and meat-processing giants JBS and Smithfield over safety violations. And, while attorneys warn that workers face an uphill battle fighting employers in court,Reuters reports people who caught COVID from family could cost businesses up to to $US21 billion.