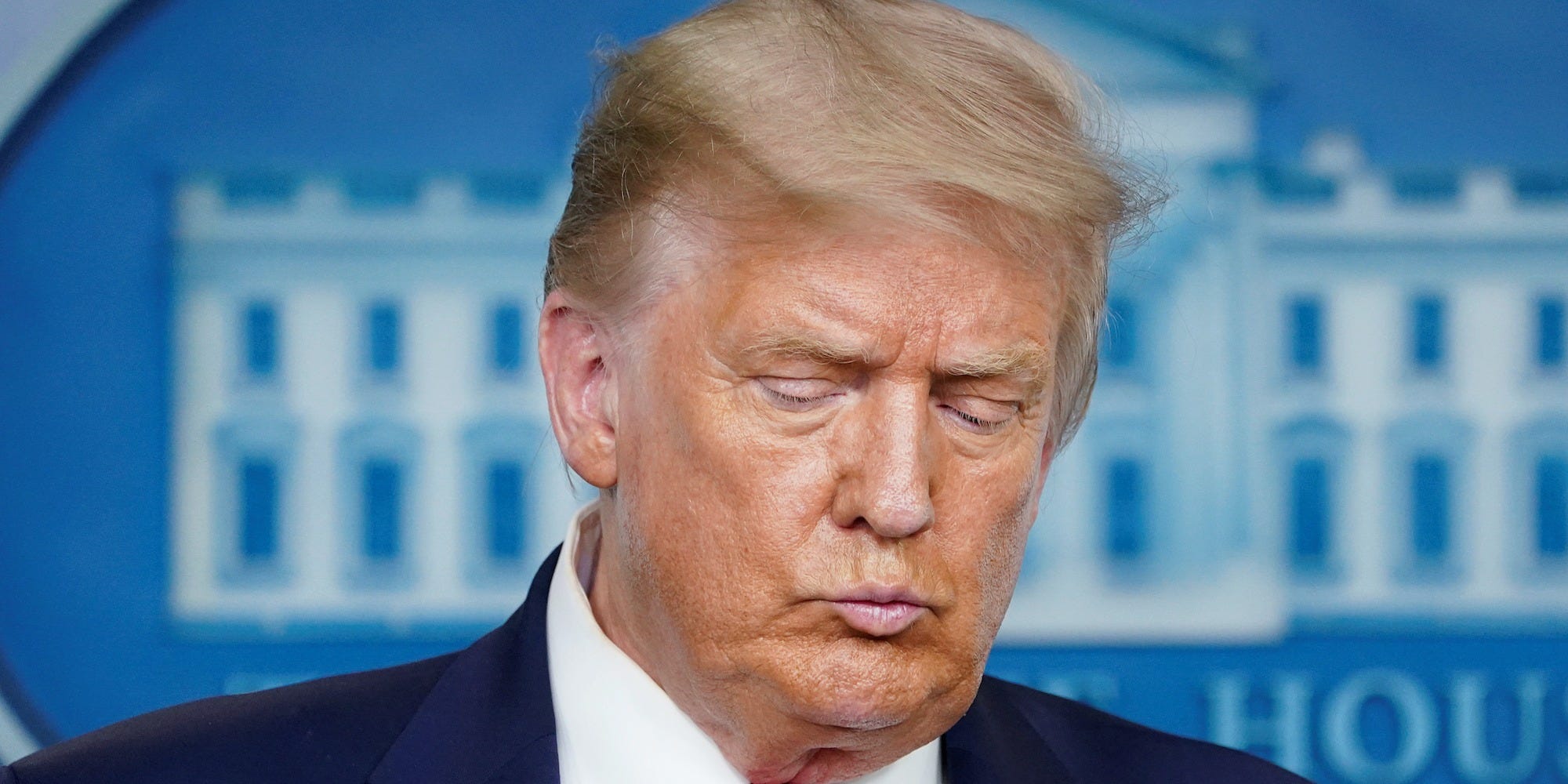 Kevin Lamarque/ReutersPresident Donald Trump during a coronavirus news briefing at the White House on July 23.

Top Republicans including Senate Majority Leader Mitch McConnell on Thursday strongly rebuked and bat down President Donald Trump’s suggestion that the 2020 election should be “delayed.”

WNKY TV anchor Max Wintiz tweeted that McConnell told him he believed the election date was “set in stone” and said the US has held elections during past crises, in an interview set to air this evening.

Trump, who for months has made inaccurate claims that mail voting is inherently fraudulent and corrupt, falsely claimed that the United States has “universal mail-in voting” and explicitly questioned whether the 2020 presidential election should be delayed until America can “safely vote.”

“With Universal Mail-In Voting (not Absentee Voting, which is good), 2020 will be the most INACCURATE & FRAUDULENT Election in history,” Trump said. “It will be a great embarrassment to the USA. Delay the Election until people can properly, securely and safely vote???”

Trump cannot unilaterally cancel or postpone the November 3 general election by executive order, under the parameters of a national emergency or disaster declaration, or even if he declared martial law.

In 1845, Congress set the date on which states must appoint their electors to the electoral college – which today they do by holding elections – to be the first Tuesday after the first Monday in November.

Trump’s remarks were immediately panned by many top Republicans interviewed by CNN.

US Senators including Sen. Lindsey Graham of South Carolina, Sen. Marco Rubio of Florida, Sen. Thom Tillis of North Carolina, Sen. Ted Cruz of Texas, and Sen. Mitt Romney of Utah – who represents a state where all registered voters are sent a mail ballot – said they disagreed with Trump and believed the election should go on as scheduled.

McConnell’s top Republican counterpart in the House, Minority Leader Kevin McCarthy told CNN that “never in the history of federal elections have we ever not held an election and we should go forward with our election.”

Rep. Rodney Davis of Illinois, the ranking member of the House Administration Committee, which has jurisdiction over federal elections, tweeted:“Congress sets the election date, and it should not be changed. It will be held on November 3rd, as planned and required by law.”

“Make no mistake: the election will happen in New Hampshire on November 3rd. End of story. Our voting system in NH is secure, safe, and reliable,” Sununu wrote.

The United States must hold its election on Tuesday, November 3rd. Ohio will have four weeks of absentee voting, early in-person voting and election day voting as we always have. And we will be ready.

Ohio will have a safe, secure and accurate Election Day.

The process by which states appoint their electors to the electoral college is laid out both in Article II of the US Constitution – which requires states to appoint a number of electors equal to the number of their representatives in the US House and Senate “in such Manner as the Legislature thereof may direct” – and in Chapter 1 of Title 3 of the United States Code, which sets the timing of that appointment.

Even if Trump tried to delay the election, it wouldn’t benefit him.

The 20th amendment to the Constitution stipulates that if the electoral college doesn’t vote, Trump and VP Mike Pence’s terms automatically expire on at noon on January 20, 2021.