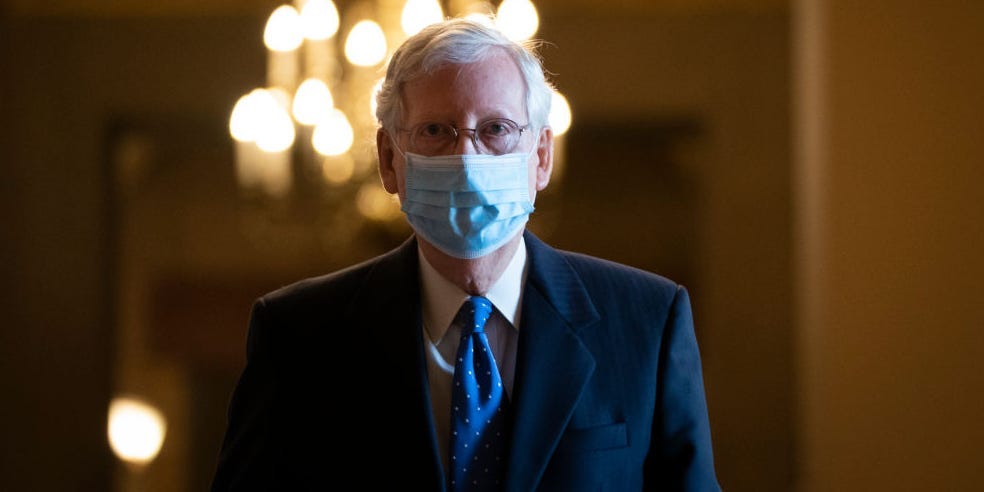 Senate Majority Leader Mitch McConnell told reporters in Kentucky on Thursday that he wouldn’t put a coronavirus relief bill negotiated between the White House and Democrats up for a vote on the Senate floor, effectively torpedoing a deal.

During a campaign appearance, McConnell was asked whether he believed that a compromise on a deal between $US1.8 trillion and $US2.2 trillion was possible.

“I don’t think so,” he said, adding, “That’s where the administration’s willing to go.

“My members think what we laid out â€” a half a trillion dollars, highly targeted â€” is the best way to go. So that’s what I’m going to put on the floor.”

McConnell said that a package negotiated between House Speaker Nancy Pelosi and Treasury Secretary Steven Mnuchin was “not what I’m going to put on the floor.”


Read more:
Here’s what could be in Mitch McConnell’s $US500 billion coronavirus stimulus bill set for a Senate vote next week

McConnell’s comment put him at odds with President Donald Trump on the size of a stimulus package three weeks before Election Day. The president has recently ramped up calls for another large spending bill, telling lawmakers to “go big or go home.”

“We like stimulus. We want stimulus. We think we should have stimulus,” Trump said in a Fox Business interview on Thursday. He indicated that he could increase his administration’s offer beyond $US1.8 trillion, but he didn’t specify an amount.

The contrasting comments injected more turmoil into relief talks that have already been volatile over the past week â€” and greatly diminished the chance that Congress will enact a coronavirus aid deal before the election on November 3.

Senate Republicans are set to put a $US500 billion aid bill â€” a fraction of what Trump is seeking â€” on the floor shortly after reconvening on Monday.

McConnell suggested it would be similar to one that Democrats blocked in early September. That legislation contained federal unemployment benefits and small-business aid but not $US1,200 direct payments for taxpayers.

In a 90-minute phone conversation with Mnuchin on Thursday afternoon, Pelosi brought up McConnell’s opposition to bringing a negotiated package to the Senate floor, said Drew Hammill, a spokesman for Pelosi.

“The Secretary indicated that the President would weigh in with Leader McConnell should an agreement be reached,” Hammill wrote on Twitter. It’s unclear whether the Kentucky senator would shift his position if Trump were to pressure him, given the president’s ever-changing views and weakness in polls.

House Democrats passed a $US2.2 trillion economic relief package last month, and Pelosi has pressed for its provisions in negotiations with Mnuchin. But some Democrats this week stepped up calls for a compromise.

Both the White House and Democrats want $US1,200 direct payments, small-business aid, and assistance to the airline industry. But they dispute how much funding should be included for enhanced unemployment insurance, aid to cash-strapped state and local governments, and childcare.

No stimulus soon could weaken the economy

Many economists have prodded Congress to approve additional federal spending to prop up an economic recovery that’s showing signs of weakening. At least a dozen large companies have warned of significant layoffs if the government doesn’t provide more aid, and several airlines have furloughed thousands of workers.

Funding for Trump’s $US300 weekly federal unemployment-aid program set up through an executive order in August has also run out.

Michele Evermore, a national unemployment expert at the National Employment Law Project, told Business Insider that many jobless people could exhaust their state unemployment benefits by the end of December if Congress fails to step in with additional legislation.

“We’re talking about millions of people who will reach the end of their benefits before the end of the year,” Evermore said. “This isn’t going between regular unemployment and $US600 or $US400. This is taking people down to zero.”

In a Census Bureau survey in late September, nearly one in three adults in the US â€” or 78 million people â€” reported having trouble paying usual household expenses such as food, rent, student loans, and mortgages, per an analysis from the left-leaning Centre on Budget and Policy Priorities.