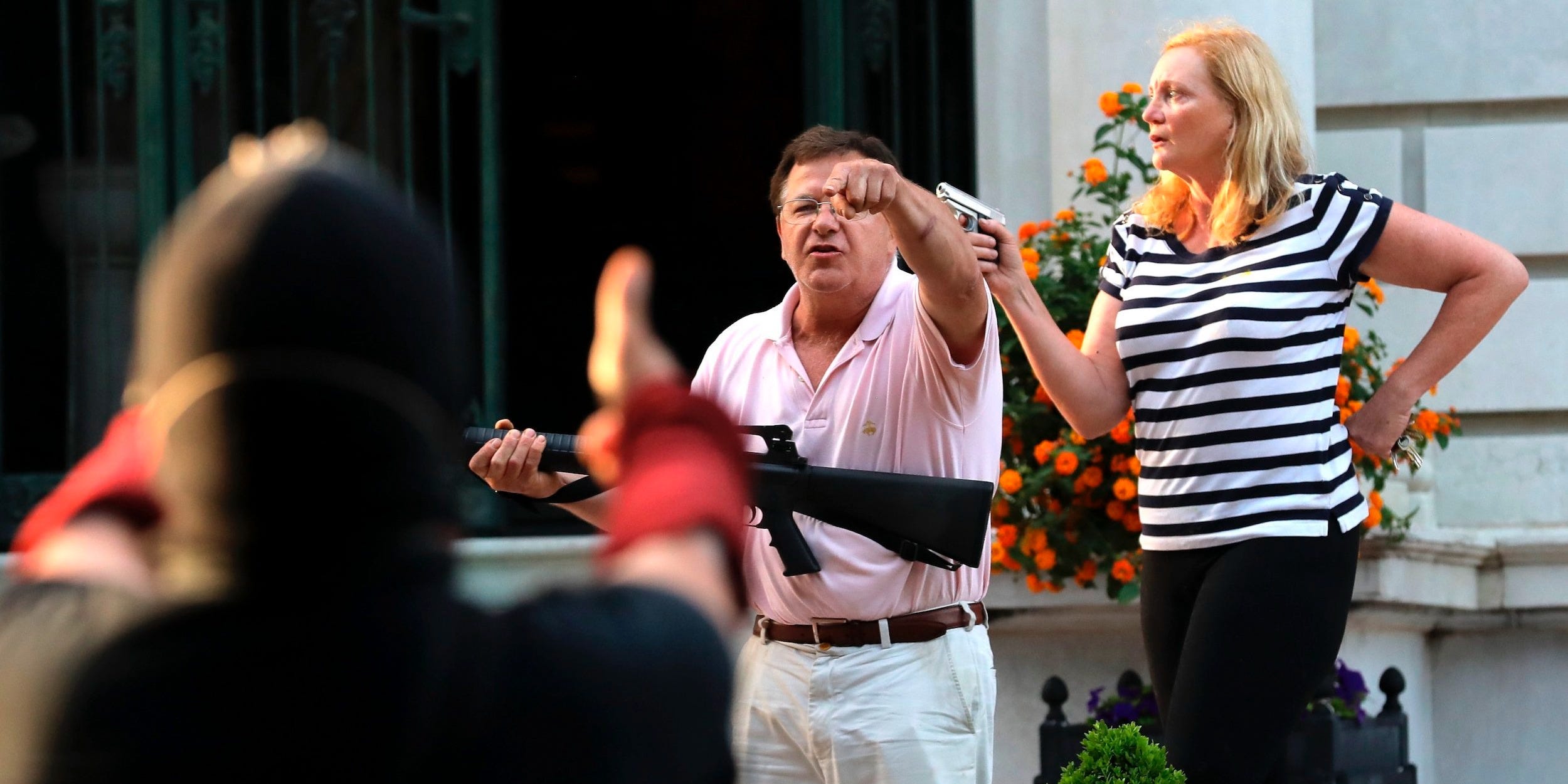 Laurie Skrivan/St. Louis Post-Dispatch via APMark and Patricia McCloskey confront protesters outside their home in the Central West End of St. Louis, June 28, 2020.

They stand next to each other, a white couple in their sixties. He wears a salmon Brooks Brothers polo tucked into his khakis; her a casual white-and-black striped shirt. Both are barefoot. Both are armed, him with an AR-15 rifle, which he holds by the grip and then by the handguard; her with a shiny little semiautomatic pistol, her finger on the trigger.

Yelling and gesturing, they sweep the crowd of protestors before them, pointing the barrels of their weapons at one another repeatedly in the process.

In a torrent of arresting news footage, Mark and Patricia McCloskey standing outside their 18,000-square-foot St. Louis mansion has become iconic. Since they were filmed confronting protestors on June 29, the memes have been nonstop. There was even the inevitable presidential retweet.

But beyond the immediate partisan divisions, social media churn, and TV news hits, Sunday’s scene condensed into an image a history of struggles over race, guns, private property, and public space that are as old as the US itself and are playing out again before our eyes. 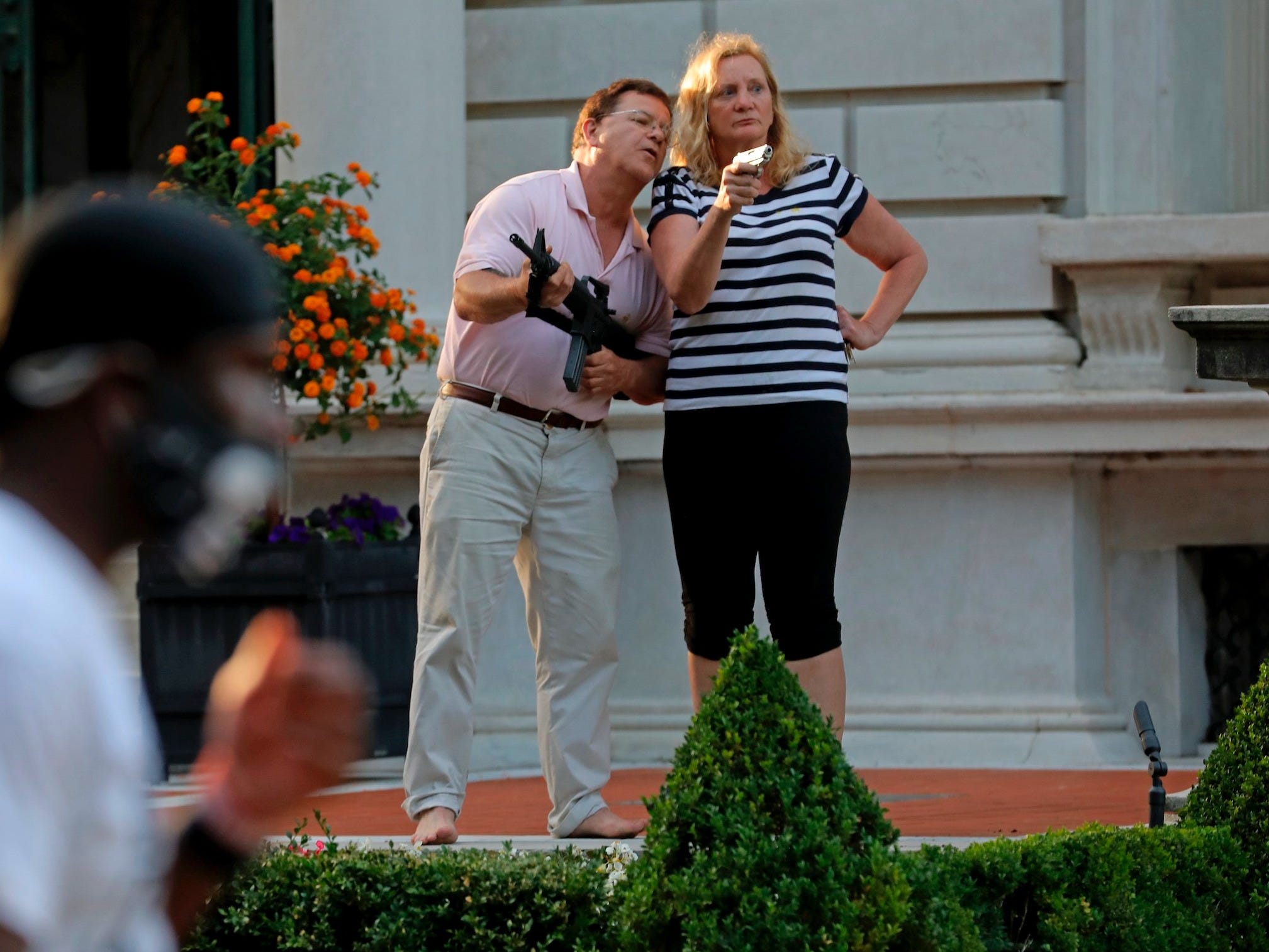 St. Louis has always been a flashpoint for the most elemental struggles and traumas of the American story. Its growth on the banks of the Mississippi River tracks successive waves of colonisation, ethnic cleansing, domination, and expropriation.

For centuries, the region was the heartland of the highly sophisticated indigenous civilisation of the so-called Mound-Builders or Mississippians. The region’s geographic advantage in turn drew European traders. After the Louisiana Purchase, the city became a launching pad for white exploration and settlement – a beachhead from which western governors coordinated “Indian removal” and scorched-earth campaigns of extermination. In 1836, it was the site of arguably the first recorded lynching of a black man in the US.

After the Civil War, St. Louis was a hotbed for Klan activity, and as it became a booming railway hub and manufacturing centre, private corporations and state authorities worked together to develop new tactics for crushing labour unrest and maintaining ever-starker inequality – glittering mansions not far from shanties, dormitories, and flophouses.

In 1916, the city was the first in the US to pass racial segregation laws by popular referendum; in 1917, days of “race riots” – essentially pogroms led by whites – left anywhere from 40 to well more than 250 Blacks dead, blocks of Black residences burned, and thousands of Black families without homes. 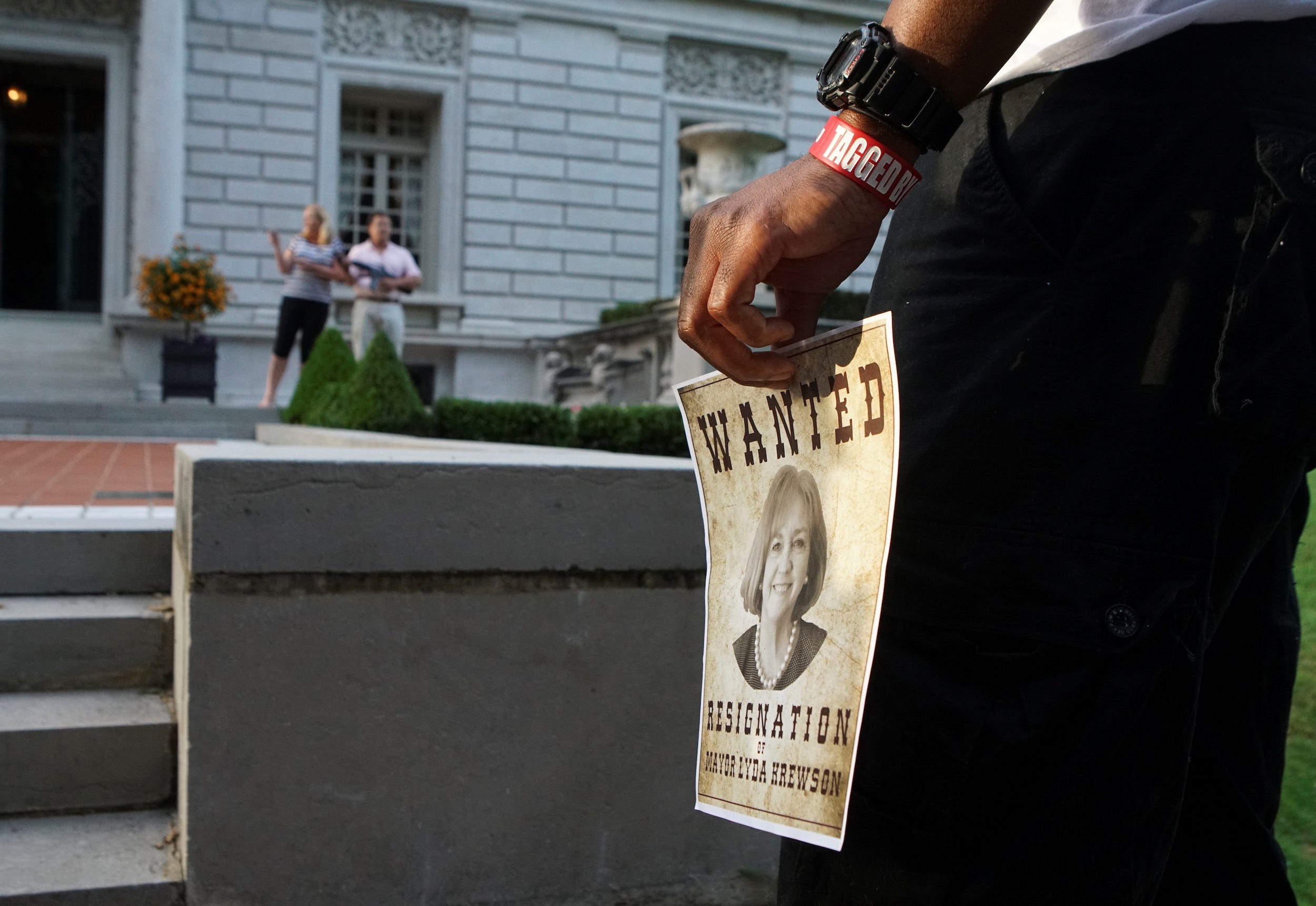 REUTERS/Lawrence BryantA protestor holds a flyer calling for the resignation of St. Louis Mayor Lyda Krewson in front of the home of Mark and Patricia McCloskey during a protest, June 28, 2020.

Today, St. Louis is generating new scenes of public unrest. Six years after the killing of Mike Brown in Ferguson, BLM protestors are once more in the streets. On Sunday, they sought to picket the home of St. Louis Mayor Lyda Krewson in response to her reading on Facebook Live the names and addresses of constituents who wrote to her in support of defunding St. Louis police – doxing them.

According to many protestors, evading road blockages en route took them past the toy mansions of the Central West End neighbourhood where the McCloskeys live. Although those homes are served by public utilities, the area includes many “private streets,” a phase that could be called indicative of St. Louis’ urban planning.

This arrangement is both an artefact of the late 19th century, when industrialists sought to create proto-gated communities, and of the 1970s and 1980s, when city officials sought to lure wealthy residents back after the white flight of the 1950s and 1960s. Reports differ on whether and how the protestors entered the area, but as they streamed down the street, McCloskey and his wife met them from their lawn with guns drawn.

McCloskey has explained that, “I was a person scared for my life, protecting my wife, my home, my hearth, my livelihood. I was a victim of a mob that came through the gate.” He also said that he “was assaulted” and that he “really thought it was storming the Bastille.” (Although what exactly he meant by “assaulted” or with the Bastille analogy are unclear.) 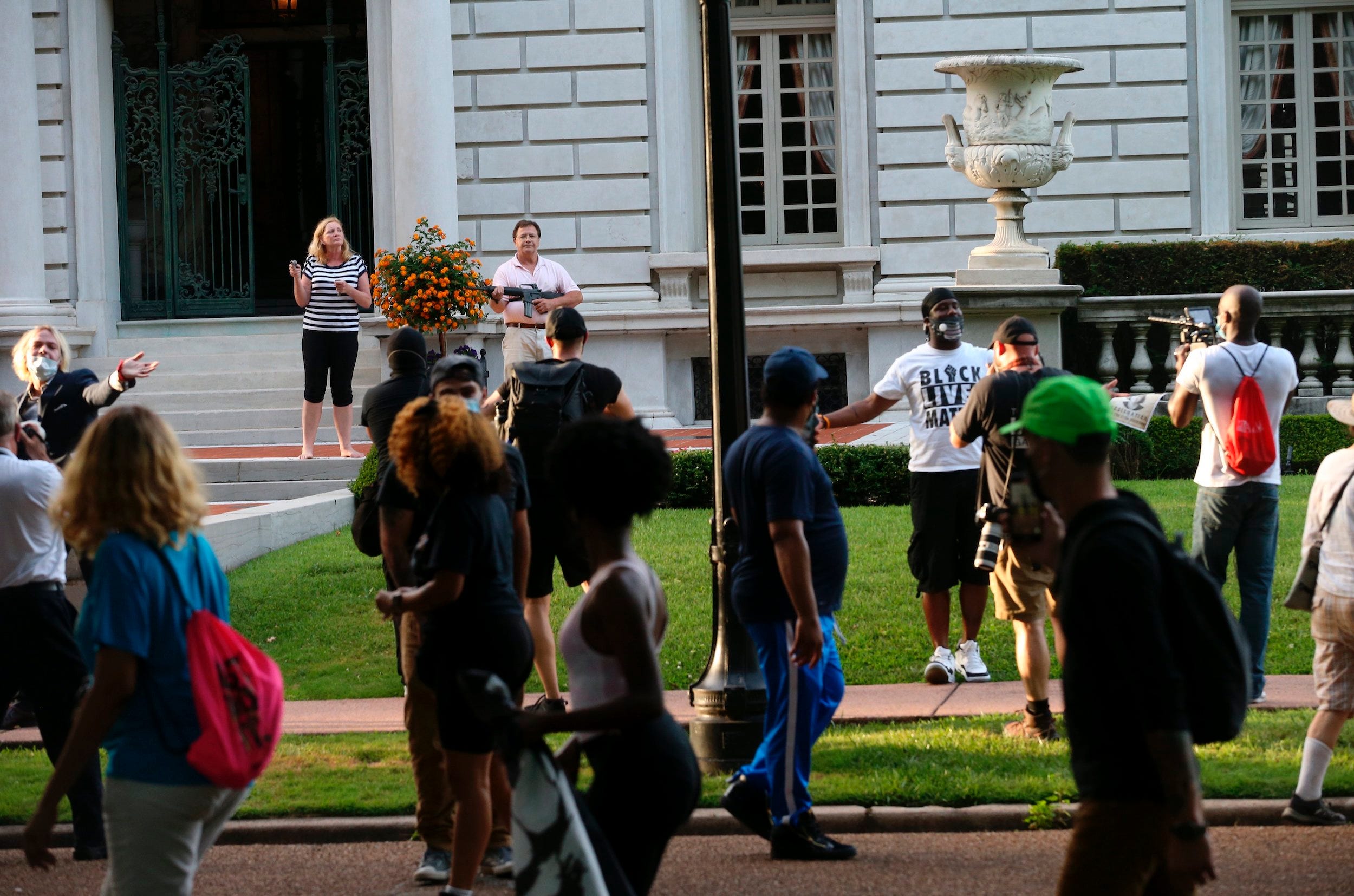 Video of the scene does not appear to show any armed protestors (although some may have been; reports on this also differ) nor does it appear to show any protestors stepping off the private street and onto the McCloskeys’ lawn. In fact, video shows protestors holding their hands up, telling McCloskey not to shoot and trying to de-escalate the situation by moving one another along.

Parsing what happened in terms of the law gets murky fast. As US states go, Missouri is quite liberal in terms of gun rights. The open carry of firearms is legal. Missouri is also a Castle Doctrine state, allowing home owners to make armed self-defence of their residences against invaders. The state does not impose a “Duty to Retreat,” meaning gun owners can shoot and aren’t required to flee from their home or elsewhere if they feel their lives are under imminent threat (sometimes known as Stand Your Ground).

But brandishing a weapon at someone in a threatening manner can be a felony, and the Castle Doctrine does not straightforwardly extend to “private streets.” Indeed, St. Louis city laws regarding brandishing at people in shared public spaces (in the more common language sense) may well trump the prerogatives of private citizens in private or semi-public ones. And it is certainly the case that someone’s performing an act of civil disobedience – including trespassing – does not itself grant bystanders the right to threaten lethal force against them.

Looking for clear legal answers can only go so far amid murky, overlapping zones of public and private. Analogies to other cases – like that of George Zimmerman, who had effectively self-deputized as a neighbourhood watchman when he killed Trayvon Martin in a Florida subdivision in 2012 – provide little clarity as far as the letter of the law is concerned. 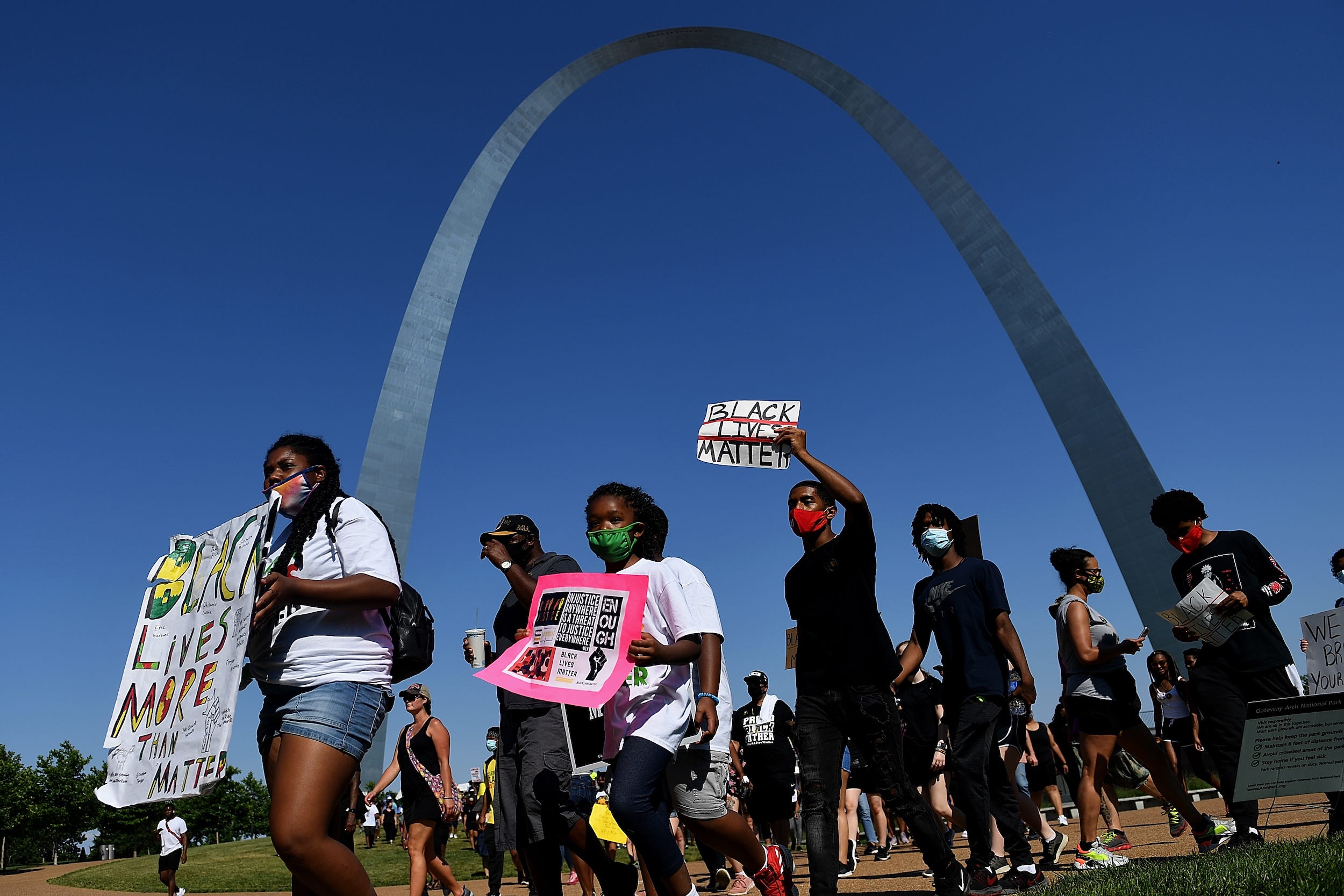 Michael B. Thomas/Getty ImagesDemonstrators at a protest against police brutality in St. Louis, June 14, 2020.

But this very murkiness gets precisely at the point. What the law says on paper is one thing. How things play out in practice is another. And the deeper structures of history that underwrite the gap between the law and practice are another matter still.

Listening to the McCloskeys’ own statements and those of their lawyer, one cannot but be struck by certain phrases. Per their lawyer, the McCloskeys, although “melanin-deficient,” are not racist and in fact “support” Black Lives Matter, the “message” of which they deem “noble.”

“What they are not capable of doing,” their lawyer has explained, “is embracing the abject utilization of that noble message that we all need to hear over and over and over again as a licence to rape, rob, pillage all over all of our rights.”

The invocation of these menaces – rape, pillage, and, in McCloskey’s own repeated phrase, the “mob”- rings at once hysterical and tin-eared in a state and country that praised “noble savages” even as lurid imagery of sacked homesteads and violated white womanhood inspired heinous acts of mass violence, vigilantism, and ethnic cleansing.

Even a cursory knowledge of American history reveals that the “our” in “all of our rights” is unevenly applied. The explicitly universal language in America’s founding documents has always been implicitly circumscribed by a racialized calculus restricting who actually can enjoy what the philosopher Hannah Arendt termed “the right to have rights.”

As scholars like Caroline Light have decisively shown, the history of America’s self-defence laws has meant that defence of one’s “castle” and person, however universally they may be phrased, have never, in practice, been universally enjoyed – a history underscored by clear empirical disparities in how Stand Your Ground and justifiable homicide cases are handled by police and juries today. 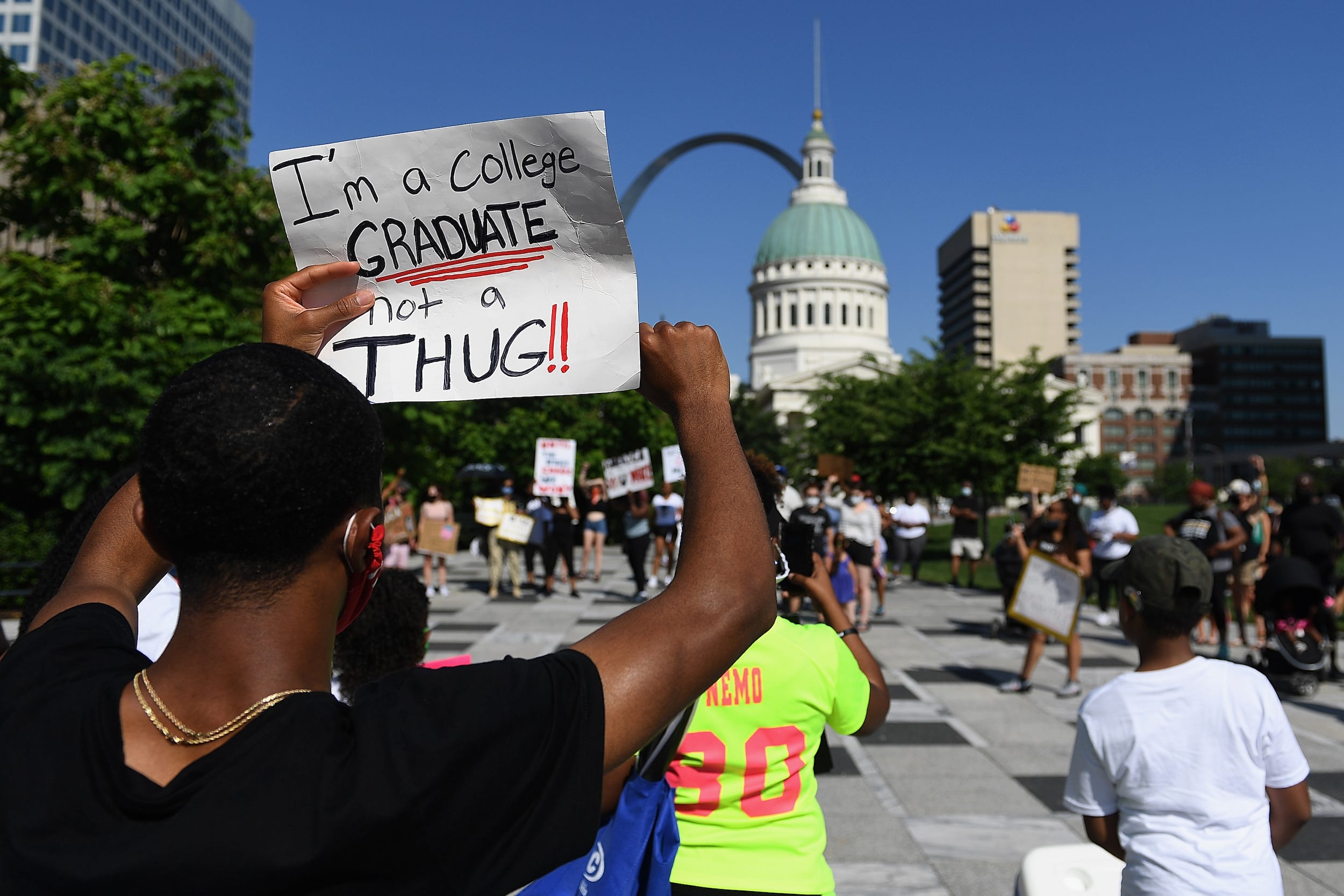 Michael B. Thomas/Getty ImagesDemonstrators at a protest against police brutality in St. Louis, June 14, 2020.

Likewise, it is striking how, in the many defences of the McCloskeys, the question of what, exactly, “private property” means is slippery. Is it their private property? Is it the private property of Portland Place Homeowner’s Association, of which they are members? Or is it the idea of a particular order of private property, which first and foremost depended on the prerogative of armed white people, civilians and otherwise, to claim territory and dominate people, above all unruly nonwhite people, within it?

Unfolding in the microcosm for America that is a posh St. Louis gated community, the image of the McCloskeys, at once absurd and menacing, reactivates distressing historical truths.

The “ground” on which Americans can equally claim to stand is not actually equally theirs – and in fact was all stolen from other people first. The order of private property which they, like so many, seek to “defend” today is also one that fully accommodated owning other people as property. The traumatic legacies of these inconvenient truths – the building blocks and origin story of racial capitalism – do not go away just because many would rather not see them.

McCloskey himself has described his and his wife’s renovation of their 18,000 square foot home – an Italianate “palazzo” built by in 1909 by the son of beer magnate Adolphus Busch – as making them “urban pioneers.” For all too many in a city defined by racial disparities in everything from zoning to income to life expectancy, this choice of words may ring at once inaccurate and all too true.

The McCloskeys’ vision of homesteading, home defence, and entitlement to wave their guns in defence of “property” in general are not innovative at all. They merely represent a very old and very ugly return to form.

Patrick Blanchfield is an Associate Faculty Member at the Brooklyn Institute for Social Research. His first book, “Gunpower: The Structure of American Violence” will be released by Verso Books in Spring 2021.