Matt Gaetz thought he could 'do what he wanted' with women's nudes, a colleague said. That's not how it works. 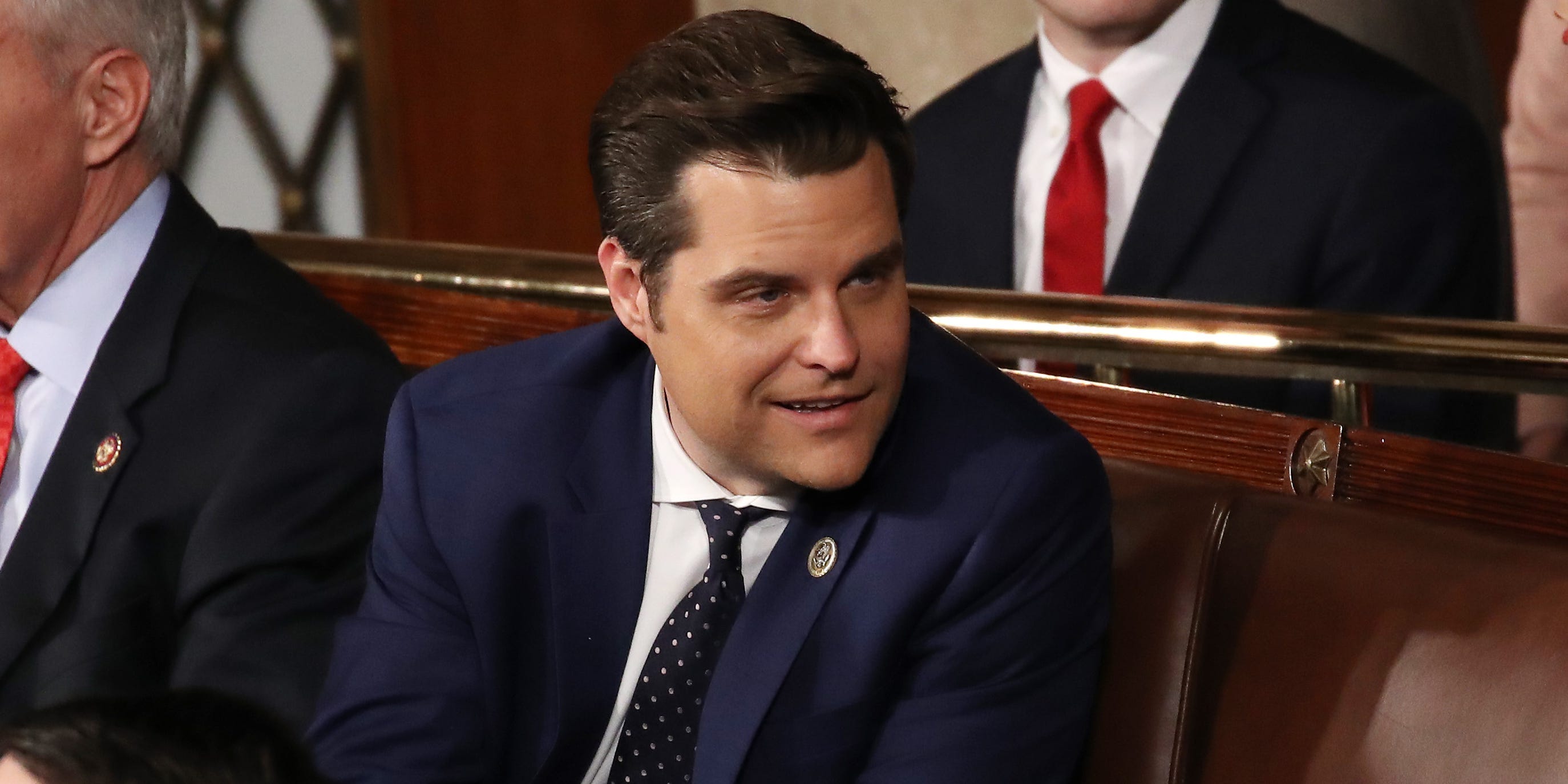 Drew Angerer/Getty ImagesRep. Matt Gaetz (R-FL) awaits the State of the Union address in the chamber of the House of Representatives on February 4, 2020 in Washington, DC.

When the state senate in Florida passed a bill that would ban nonconsensual pornography back in 2015, only two lawmakers voted against it. One of them was Rep. Matt Gaetz.

Former state Rep. Tom Goodson, who was the main sponsor of the legislation at the time, told the Orlando Sentinel this week that when he met with Gaetz to discuss his opposition, it was clear that “Matt was absolutely against it.”

Read more:
A Trump appointee who drank vodka and had sex on the General Services Administration building’s roof is back with a new political committee, documents show

Gaetz’s supposed outlook has become even more problematic now that the lawmaker is under investigation by the House Ethics Committee for allegedly showing several colleagues in Congress nude videos and images of women he’d slept with. This is on top of an already existing sex trafficking probe.

What is most striking about Goodson’s claims this week is Gaetz’s supposed assumption that the recipient of a private photo can do what they want with it. This is not only wrong, but also dangerous for victims of image-based abuse.

Amy Hasinoff, an associate professor at the University of Colorado Denver who recently co-authored a study on image-based abuse, told Insider: “Just because someone consented to send a photo doesn’t mean the receiver has consent to distribute it. That’s a completely separate act.”

“If somebody wants to distribute your sexual images, they have to get your permission first,” she added.

But unfortunately, nonconsensual pornography is still far too prevalent. A nationwide study in 2017 found that 1 in 8 Americans who have social media have been targets of image-based abuse. Women were significantly more likely to have been targets compared to men.

Former Rep. Katie Hill, who was forced to resign from Congress in 2019 after nude images of her were leaked, told Fortune last year: “We need to dispel the myth that the victim has done anything wrong. When you hear…’She should never have taken those photos’ we’re talking about photos in many cases that were not even taken consensually, let alone distributed consensually.”

Hill is still struggling from the fall-out of what happened: She recently lost a lawsuit against the Daily Mail for publishing the photos of her (her team plans on appealing the case.) 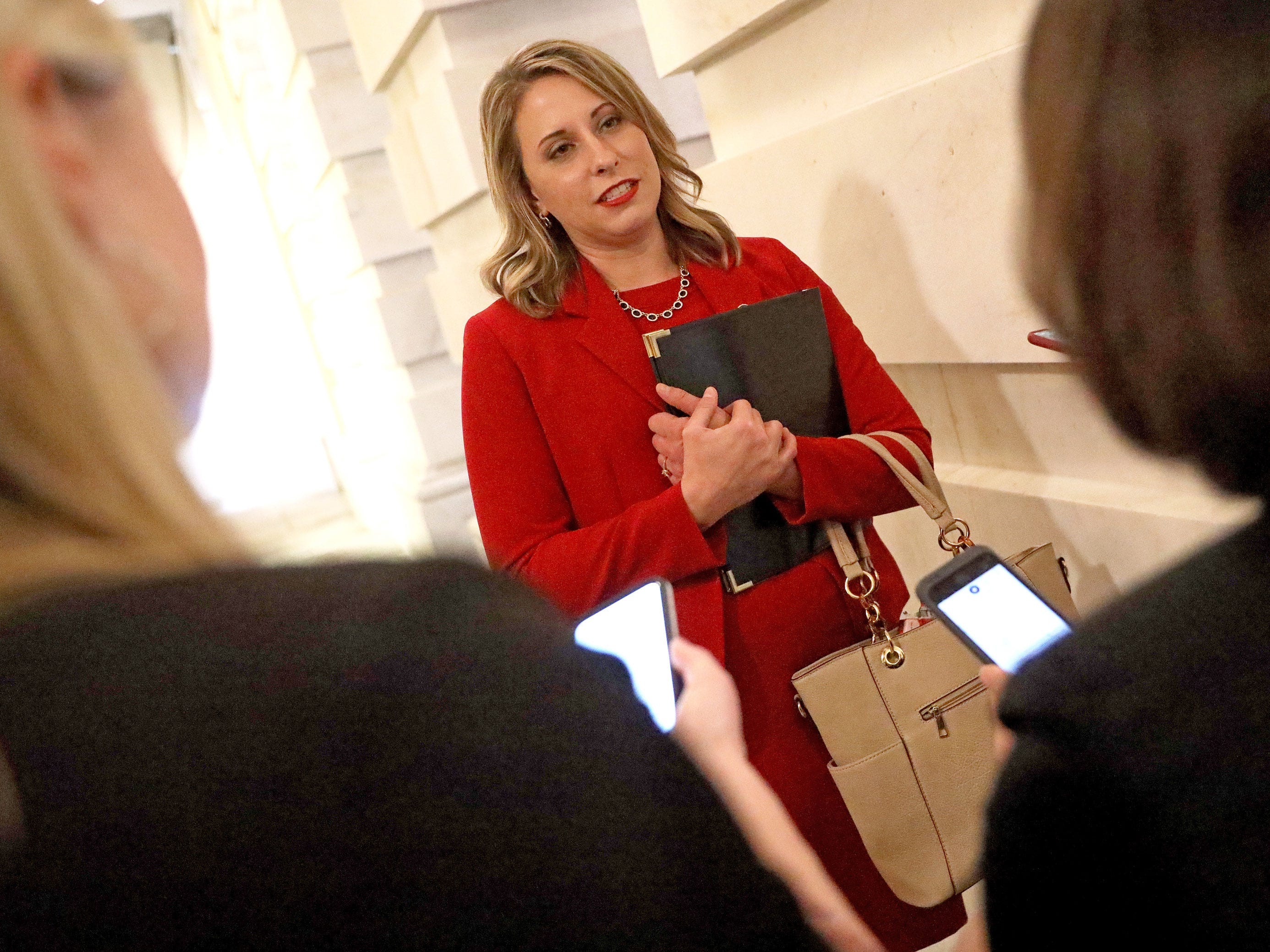 Win McNamee/Getty ImagesFormer Rep. Katie Hill (D-CA) answers questions from reporters at the Capitol following her final speech on the floor of the House of Representatives on October 31, 2019 in Washington, DC.

Like many victims, her mental health has also suffered. “One of the most overwhelming feelings is knowing that the vast majority of people who know who I am if I encounter them on the street and they recognize me. I have to hold it within my mind that there’s a very good chance they’ve seen my naked pictures,” she told Fortune.

“That’s a really shitty thing to think about,” she added.

Last week, the former Representative tweeted that she felt “depressed, anxious, nauseated” by the new claims, especially because she once considered Gaetz an unlikely ally (he had defended her during the scandal.)

“I have to wonder about what his motives were when he defended me back then,” Hill said in an interview with CNN on Friday. “Knowing now that that could’ve been just because he was trying to kind of cover-up for whatever his own indiscretions were or be able to use my name and invoke that defense later on. It’s just gross.”

For Hill and other campaigners, the fight is still far from over.

Masinoff told Insider that one way to solve this problem is to make it clear to people that behavior like this is unacceptable – and even deadly. And it starts with not assuming you can share a private image as you wish.

“Most of the response to this problem has been to create sort of new criminal laws to try to punish people for doing it,” Masinoff said. “I understand that that’s sort of the tool that we have right now, but it’s wrong that this is one of the only ways we can tell people that their behavior is bad.”