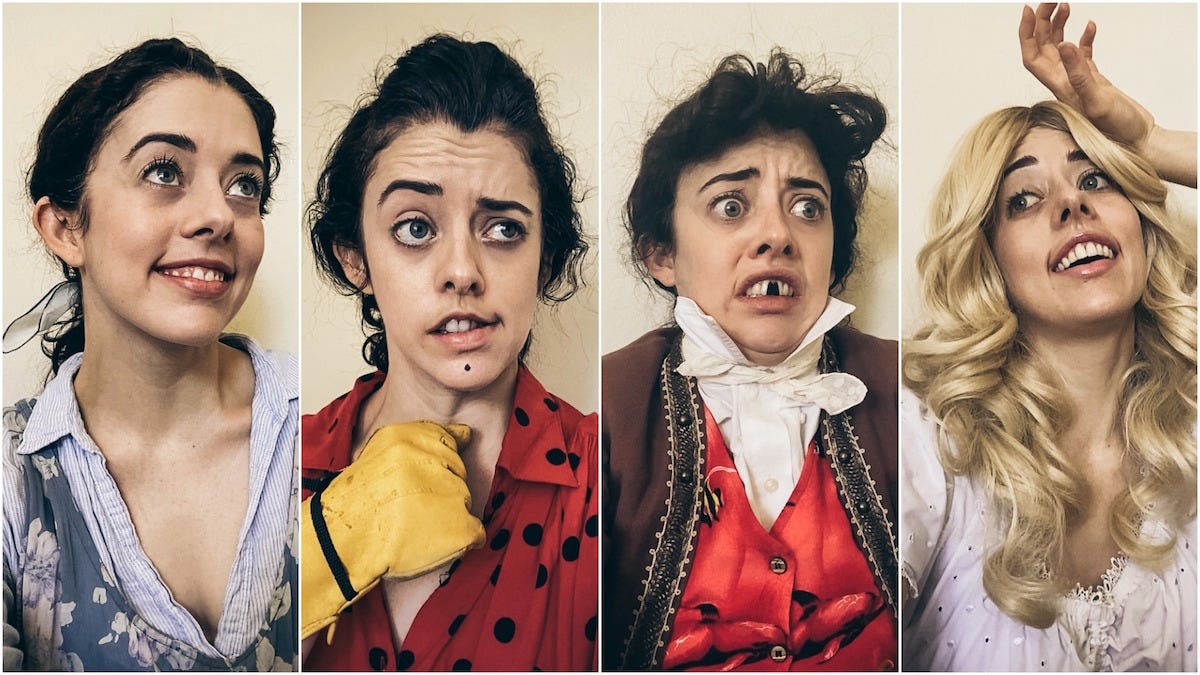 John KeatleyMary Neely’s many faces of ‘Beauty and the Beast.’

“People just need to feel happy right now. They need to be reminded that there’s joy.”

This one heartfelt sentiment from actress, writer, and director Mary Neely fully distills the driving force behind her series of one-woman musical theatre videos – which are all produced in her apartment while adhering to COVID-19 social distancing recommendations.

Neely spends hours planning, shooting, and editing these masterpieces, which have garnered attention from seemingly every corner of the internet – from Lin-Manuel Miranda, who gave her nod to “Hamilton” his seal of approval, to Rachel Brosnahan, star of “The Marvellous Mrs. Maisel.”

Like so many of us, when the world first shut down, Neely was missing her day-to-day routine and the fun of simply getting dressed up for a night out.

“I started doing this nightly routine where I would put on wigs and crazy outfits that I had in my closet as just a thing to do because I wanted to feel like I was going out,” she told Insider.

“I just want to have fun right now because I can see how easily I could just slip into deep sadness.”

Neely first donned pieces from her extensive wig and costume collection to FaceTime with friends or hop on Instagram live with a glass of wine, but what started as informal virtual gatherings quickly morphed into something much bigger and more ambitious.

“It just kind of dawned on me one day,” Neely said. “When I’m struck by inspiration, it kind of takes me over and I don’t really have an explanation for it.”

It was time to put all those wigs and costumes (and her immense talent both in front of and behind the camera) to good use.

“I didn’t want to keep dressing up in the wigs just for fun, I had kind of exhausted that,” she said. “That’s when I started making these videos.”

‘I would wake up, choose a song, shoot it, and edit it all in one day’

When she shared her first performance, “In My Life / A Heart Full of Love” from “Les Misérables,” Neely was able to plan, shoot, and edit her videos rather quickly.

since I’m single in the quarantine I’ve decided to reenact moments from my favorite musicals so it feels like I’m in love — first is LES MISÉRABLES pic.twitter.com/Om11HKDZ30

“It was really just something to do […] I got into this new routine where I would wake up, choose a song, shoot it, and edit it all in one day.

“If it was just two characters and it was somewhat simple, it would only take me one-and-a-half to two hours [to shoot].”

Neely even gave her fans a peek at how she makes the magic happen with a series of behind-the-scenes videos.

As a self-proclaimed parishioner of the church of musical theatre, Neely doesn’t have to spend any time learning or memorising the lyrics to the songs she chooses, but she does sometimes study recordings of Broadway performances to formulate her own plan for staging and blocking each shot, modifying based on what she can do in her apartment.

After shooting 10 videos in 10 days, including scenes from “Wicked” and “Phantom of the Opera,” Neely was ready to step it up a notch.

“I’m always a perfectionist,” she said, “but I had higher standards so I was doing more and more takes and watching them back because I always have to see if I’m cutting my face off or if the framing is wrong.”

Her rendition of “You’re The One That I Want” from “Grease” features Neely’s expert use of ancillary characters – something that added equally to both the time and quality of her more complex videos.

‘So much of this is out of my control, but the thing I can do is make people laugh’

What’s basically turned into a full-time (albeit, temporary) gig for Neely gives her something to look forward to, but also serves as an opportunity to help in a time when so many of us feel helpless.

After those first Instagram Live sessions in her apartment, Neely began receiving messages from friends new and old telling her how much they loved the content she was putting out there and how happy it made them feel.

“There’s really not much I can do. So much of this is out of my control, but the thing that I can do is make people laugh,” she said.

“I literally started doing this for my parents and friends who were telling me ‘This is such a good way to wake up,’ and that was enough for me.”

and now, for the finale, my magnum opus: BEAUTY AND THE BEAST part I pic.twitter.com/R37J7nF5Cw

Lin-Manuel Miranda is one of her many fans

Neely’s parents may always be her biggest fans, but they are far from the only people who have seen her videos at this point.

“At the beginning I literally had 800 followers on Twitter,” she told Insider. “I felt like I was basically just doing it for my parents and friends and then it just completely changed in this way I did not expect.”

Neely’s Twitter following has reached more than 28,000 and counting and many of her entertainment industry peers have taken notice.

On hearing from Lin-Manuel Miranda after her take on his Broadway sensation, “Hamilton,” Neely is rightfully over the moon.

“It’s incredible,” she told Insider. “He’s literally the king of musical theatre right now and to get any kind of shout out or approval from him means everything; let alone the fact that it’s his own work.”

Miranda also praised Neely’s three-part production of “Beauty and the Beast” and fans are now begging them to team up on a similar project.

“I Need Six Eggs!” receives the love and care it deserves here thank you @mneelzy https://t.co/5kMuUOeMCU

Her new supporters are paying her to keep going

To immortalise the cast of characters she’s portrayed recently, Neely sat for a series of FaceTime portraits with photographer John Keatley.

Keatley captured Neely’s many faces (and wigs) as part of a current portrait and interview project in which he is documenting life during quarantine.

FaceTime portraits of @mneelzy and several of the characters she plays in her quarantine musical project. You have to watch her videos. Best thing I have seen in a long time. ???????????? pic.twitter.com/JhQyzu7dlg

However, it doesn’t look like Neely’s work is anywhere near complete.

When she released her three-part “Beauty and the Beast” masterpiece, she told fans it would be the finale of the popular video series, but its inconceivable popularity (over one million views and counting) led to fans demand more.

“I was floored by the response,” Neely said. “It feels like people are banging down my door metaphorically to say, ‘More! More!'”

Thanks in part to one supporter who called on Neely’s fans to send her the money they would have been spending on movie and theatre tickets, Neely has been inundated with wigs, video equipment, and the financial capital to ensure her encore is well worth the wait.

“I can’t take people’s money or let them buy me a tripod and lighting equipment and not make more videos, so that’s what I’ve been planning since,” she said.

Of course, like the rest of us, Neely is looking forward to reentering the world and tackling other creative projects, some of which have gained additional traction thanks to the success of her musical videos.

She’s written two features, one a musical and one an R-rated comedy, and is also working on a pilot.

The musical seems to be closest to her heart, but she told Insider: “If any one of those things became viable, I would be thrilled.”

If Neely’s recent videos are your first taste of her work, you can fill your empty social calendar by watching her earlier projects, including the comedy series, “Wacko Smacko” and the short film, “Pink Trailer.”