Alpaca carpets, Saint Laurent surfboards, and Basquiat paintings: Meet the interior designer who worked with Kylie Jenner on her lavish mansion in one of LA's ritziest suburbs 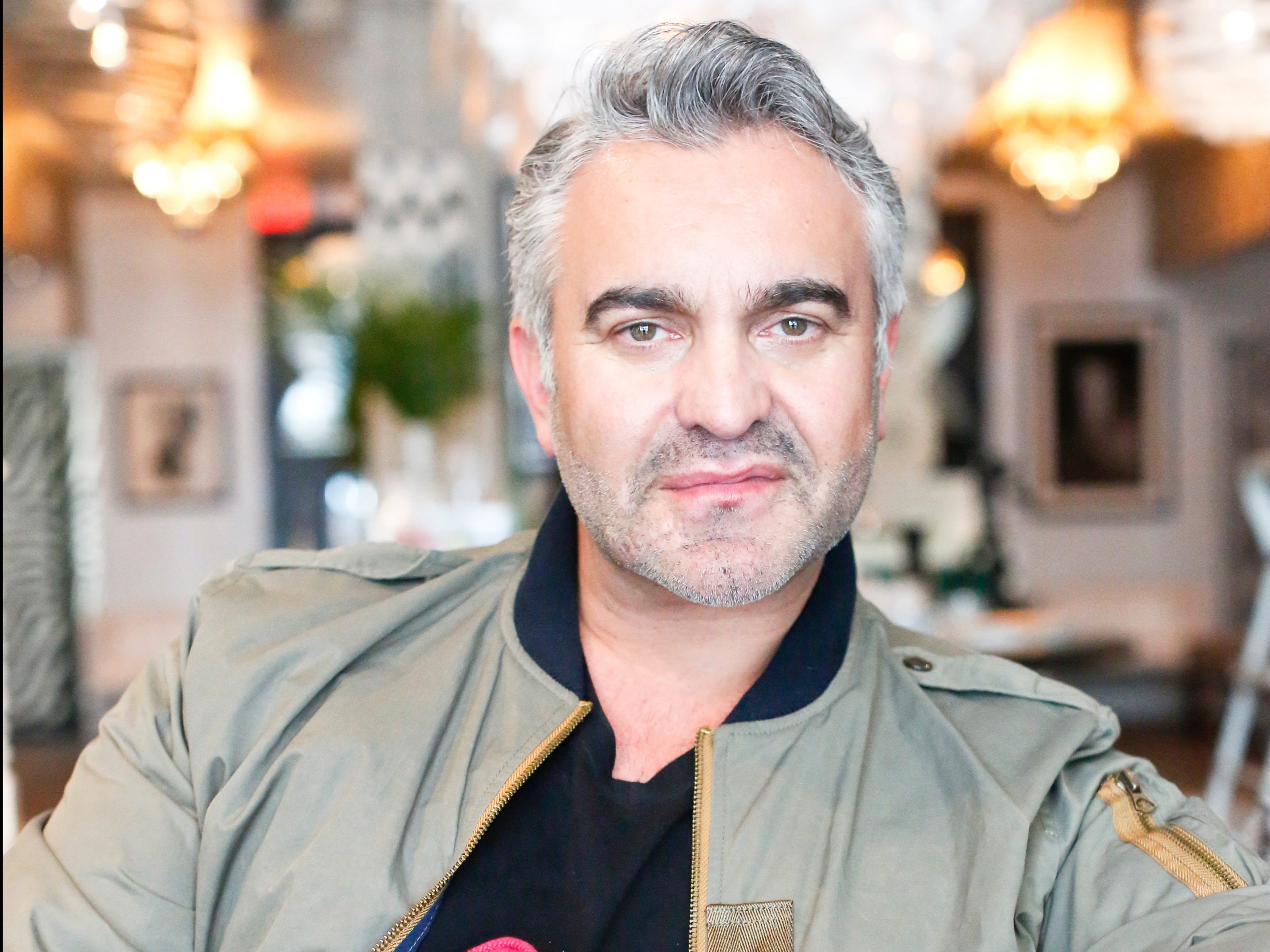 In 2018, Martyn Lawrence Bullard was designing a home for a 21-year-old client who had some unusual requests for a starter home â€” she wanted to fill it with Damien Hirsts and silk Patagonian carpets.

Of course, it was a then-pregnant Kylie Jenner, who at the time had an estimated net worth north of $US800 million. And for her Hidden Hills home, he knew he had to bring his A-game.

“It was very important for me to be very respectful and to make sure that we brought her the best of the best of things,” Bullard told Business Insider. “I wanted to make the house playful â€¦ a super-customised home, with a playful young edge, but sophisticated still.” Martyn Lawrence BullardKylie Jenner on the cover of Architectural Digest revealing the inside of her Hidden Hills home, designed by Bullard.

And so he worked tirelessly, helping the young mogul fill her home with Basquiats, Warhols, and Hirsts.

He picked out the silk, alpaca, and shearling Patagonian carpets which were then laid throughout the home.

He carefully situated the dining room chairs, each customised and upholstered in various shades of pink, from cerise to powder, dyed to match the colours found in her lip kits. 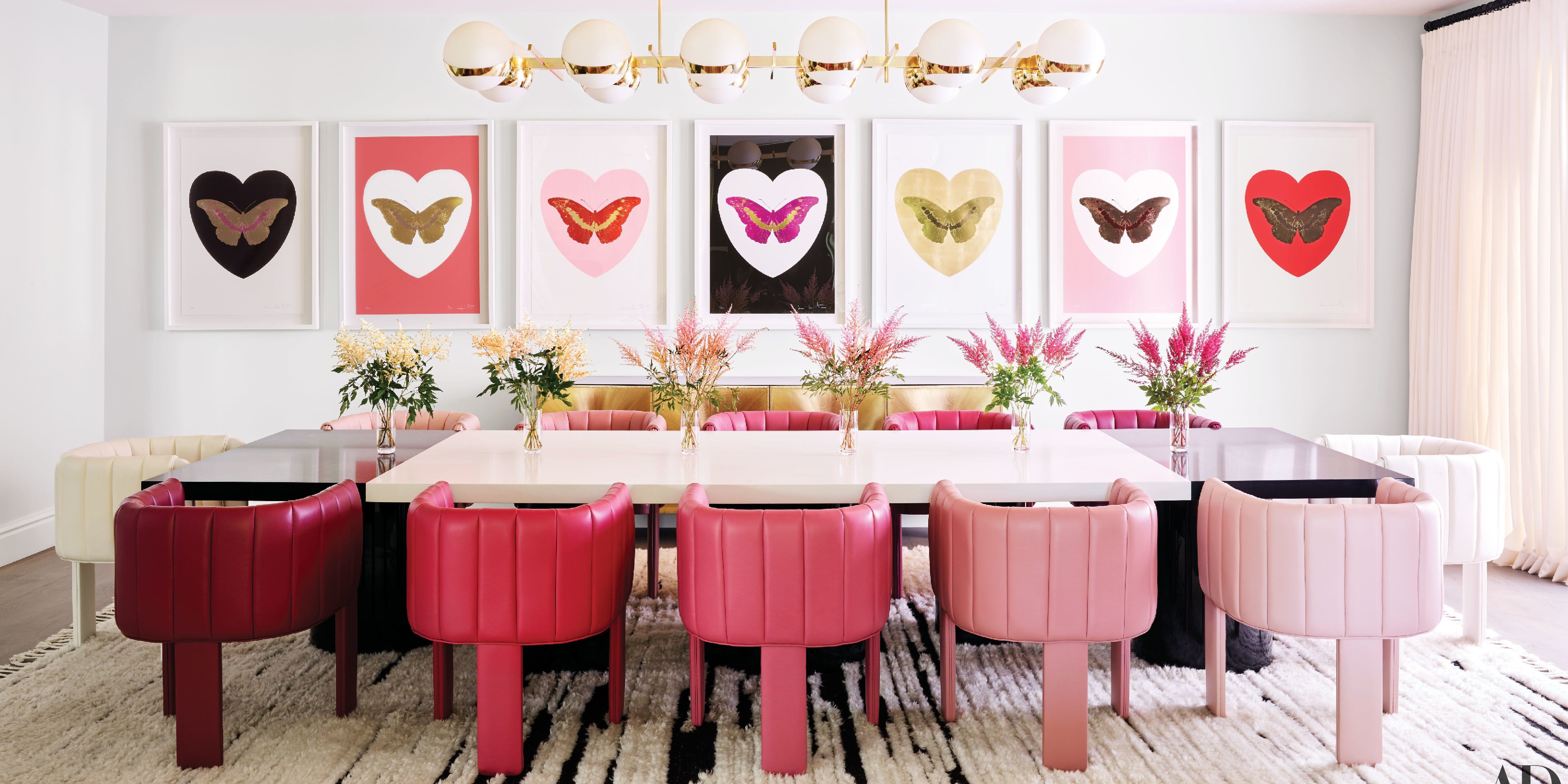 The result was a home that, in early 2019, graced the cover of Architectural Digest. It became one of the biggest interior design stories in the history of magazines â€” amassing over 1.6 billion impressions within the first month of its release.

“That’s a billion more than any other design story at the time,” Bullard said. 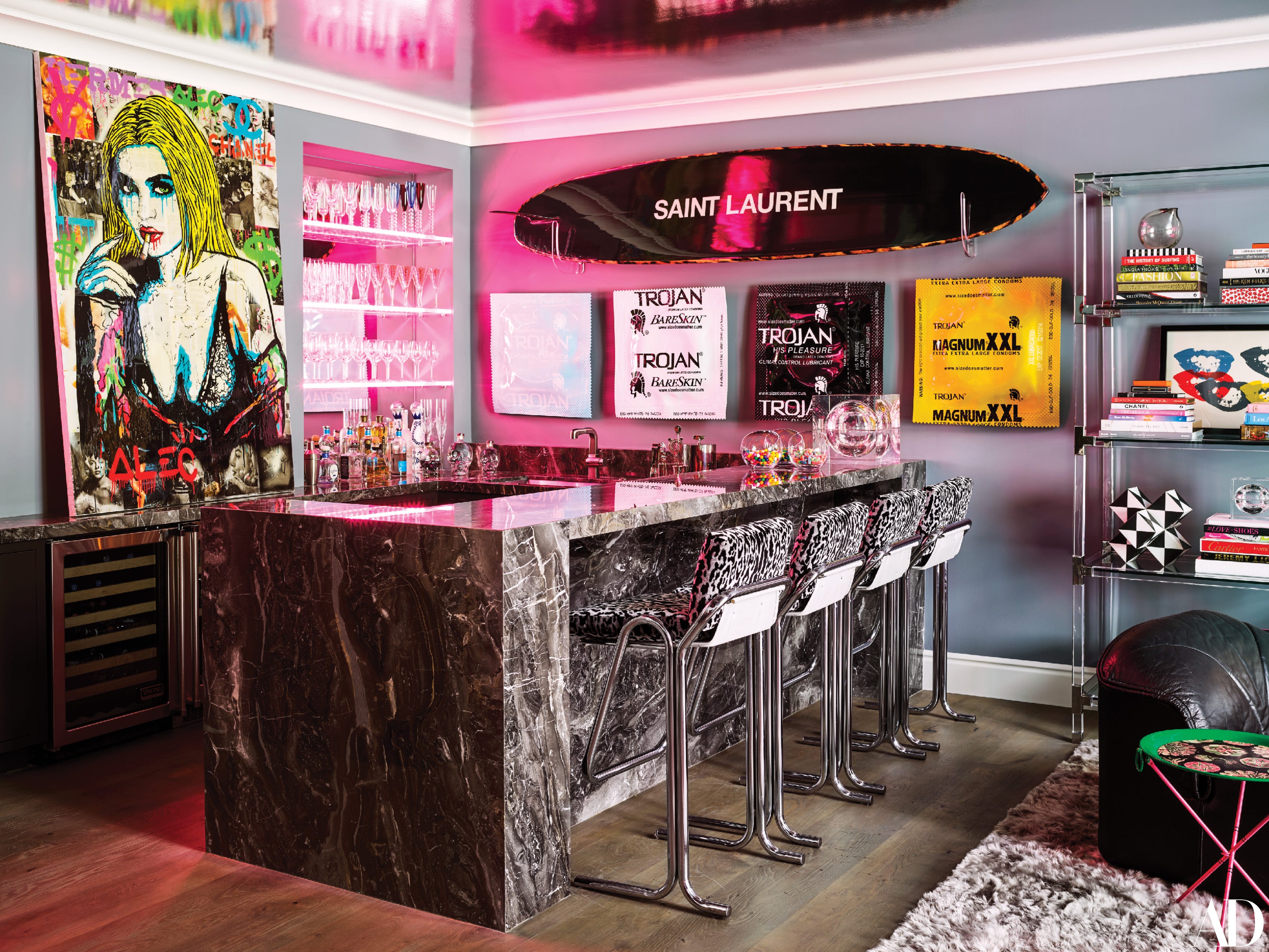 But it was just another day on the job for Bullard, as Jenner is just one of many celebrities on his roster of clients. There’s also the likes of Cher, Tommy Hilfiger, Khloe and Kourtney Kardashian, Ellen Pompeo, Kid Rock, and Ozzy Osborne.

This doesn’t even count his hospitality endeavours â€” the Jimmy Choo boutiques in London and Osaka, and posh hotels in Switzerland, the land of high-end lodging.

‘Each project is very, very individually thought out and designed’

Bullard likes individuality, and when he’s working with a client, he makes sure that the home is a reflection of their tastes and style rather than his own.

Bullard has been a go-to for celebrities since he moved to Los Angeles over 20 years ago to start up his interior design company. Since then, he has made connections with the biggest names in the world and has been able to customise some of the plus riche residences on the planet. “Each project is very, very individually thought out and designed,” he said. “The most important part of design is that you have a connection with your clients â€” to make sure that you’re on the same page, whatever that page may be.”

Raising the stakes for Bullard is the fact that a house is not just a home for many of his celebrity clients â€” they also have to replace some of the amenities that non-famous people take for granted. Kylie Jenner and Cher, he notes, cannot just go to the local theatre, or the local grocery store, and now he’s building beauty salons, gyms, and movie theatres into his clients’ homes. 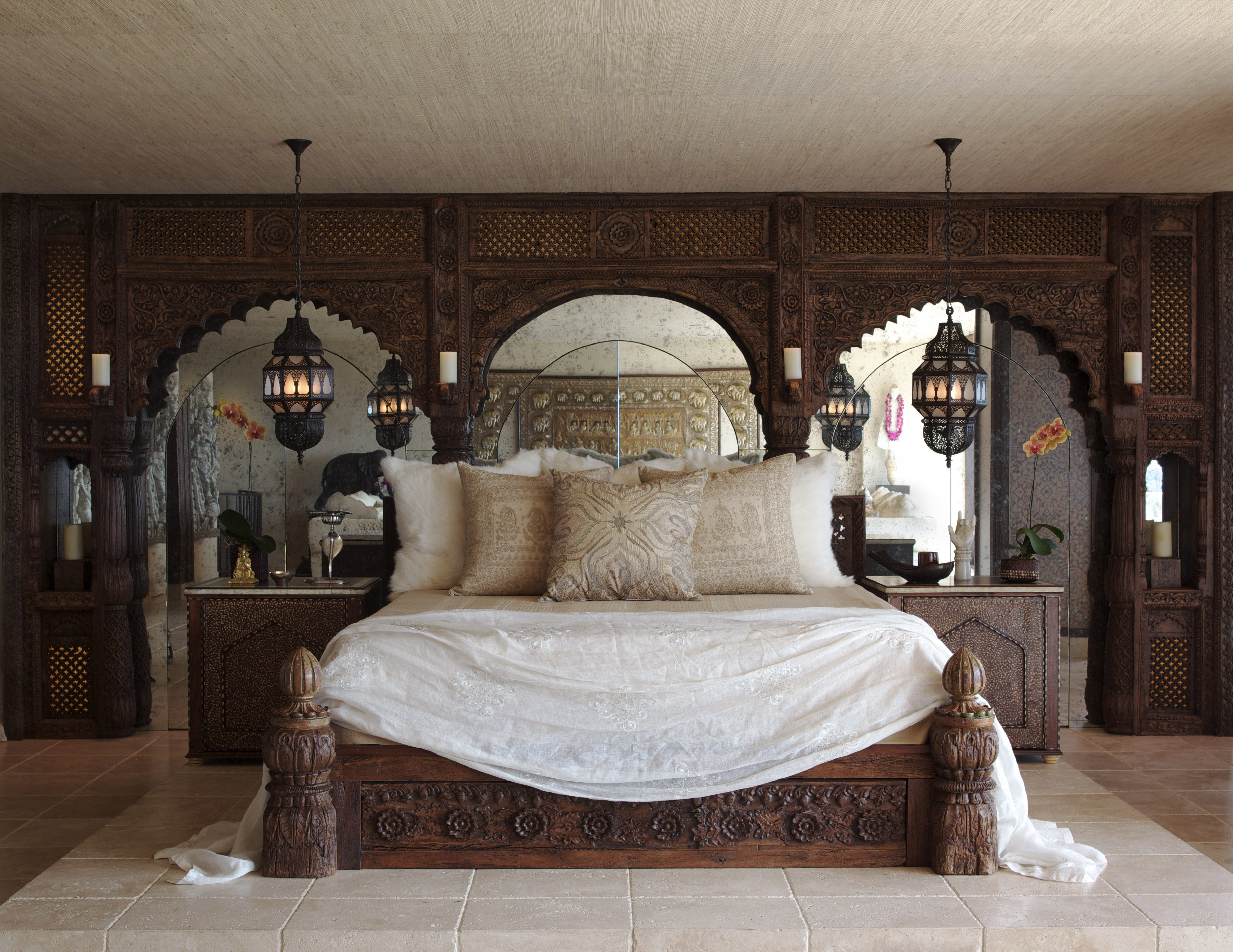 Some of Bullard’s most famous creations are the three homes he created for Cher, including the condo in Los Angeles that she sold in 2013 for $US5.25 million. According to the Los Angeles Times’ Jack Flemming, the condo spans two stories and is complete with two bedrooms and 1.5 baths.

“She said to me that she wanted to live like the first wife of a Maharajah,” Bullard said. “So I took that directive and went to India and bought the facade of the palaces from Rajasthan, which we brought back â€¦ to make the walls in her apartment look like an Indian palace.” Martyn Lawrence BullardCher’s old bathroom, with a tub made from 19th-century stone.

He then installed a floating bed, and colonnades painted to show Indian deities and goddesses. As recounted by Nancy Collins for Architectural Digest, her tub was made with 19th-century stone, and the kitchen was concealed with hand-carved latticework. The guest room featured a 16th-century Chinese opium bed.

“To design for a true diva in every sense, like Cher, is an amazing thing to do,” he said. “You get to create pure fantasy but on the level of great luxury.”

‘My taste is all over the place, ever-evolving’

Then there was Tommy Hilfiger’s great Miami mansion, which was completed with scratch-and-sniff banana wallpaper in the bathroom. The home sprawled 14,00 square feet, complete with seven bedrooms and 10 bathrooms, and hit the market in 2018 for $US23.5 million.

“It’s always amazing to work with a fashion designer because you work with a fellow creative,” he said. “And you end up with this great unspoken synergy between each other.” Bullard described the home as a playpen â€” “the ultimate fun house.” The guest rooms were yellow-and-white polka dots, while the living room had an enormous Caleigh rug that was dyed in shades of pink, purple, and orange to match the colours in a Warhol painting on the wall.

“This house had a real ’60s-’70s, Studio 54 vibe, yet, because it’s on the beach, it still had that element of being kind of a groovy beach house,” he said. “When you have clients that are adventurous, you end up with not only an incredible experience but also an incredible result.” And as for Bullard’s own homes, well, those too are glamorous escapades. There’s his Spanish-Mediterranean-styled Villa, with high-vaulted ceilings covered in black and white Moroccan geometric. 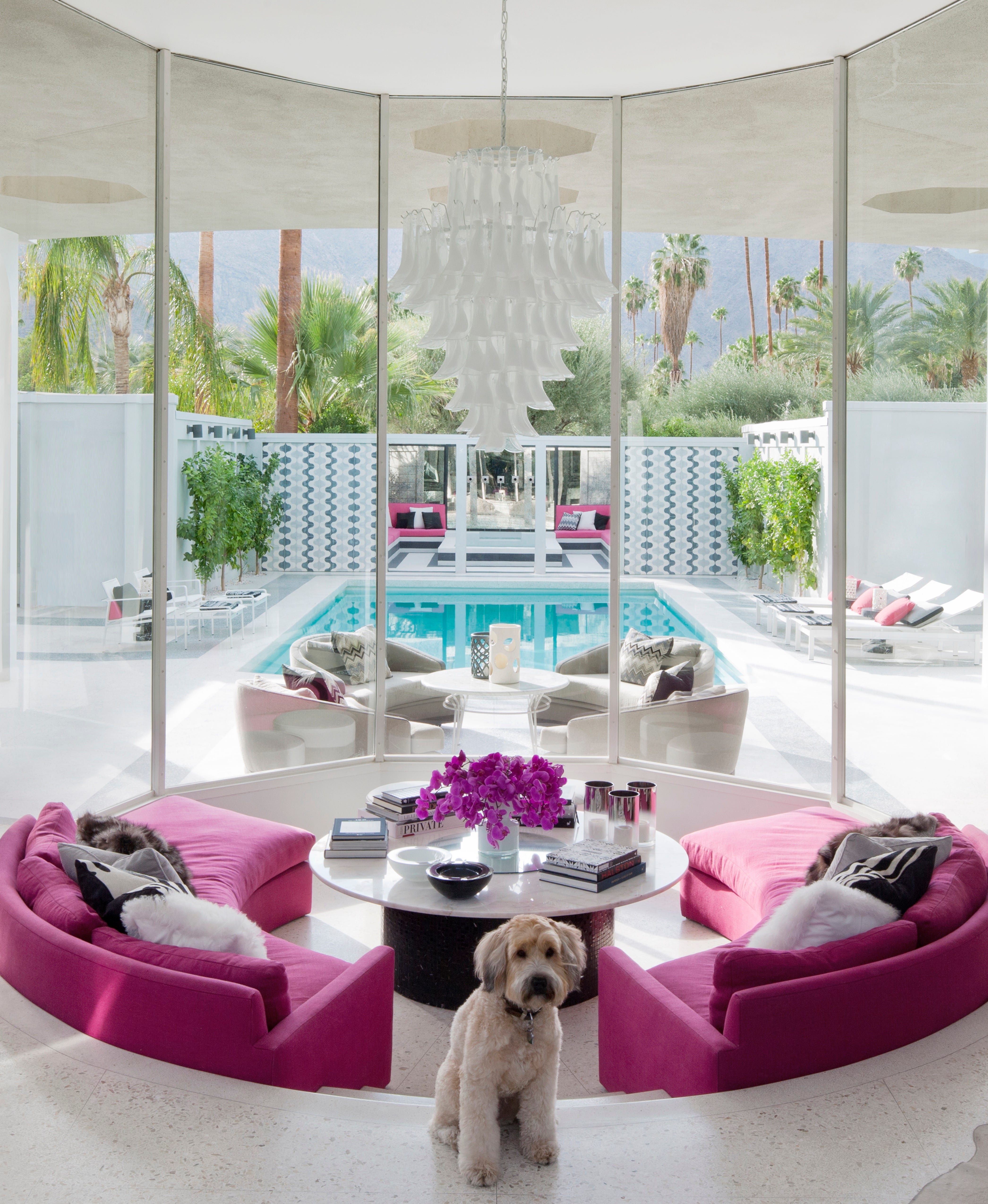 His home in Palm Springs has a sunken conversation pit, draped in cerise pink linen with black-and-white marble. It pays homage to the “James Bond ’60s vibe” and even has Italian glass chandeliers pendant from the ceilings.

“My taste is all over the place and ever-evolving,” he said. “A designer’s home is really their experiment. It’s that place that you use as an experiment before you do that experiment on your clients.”