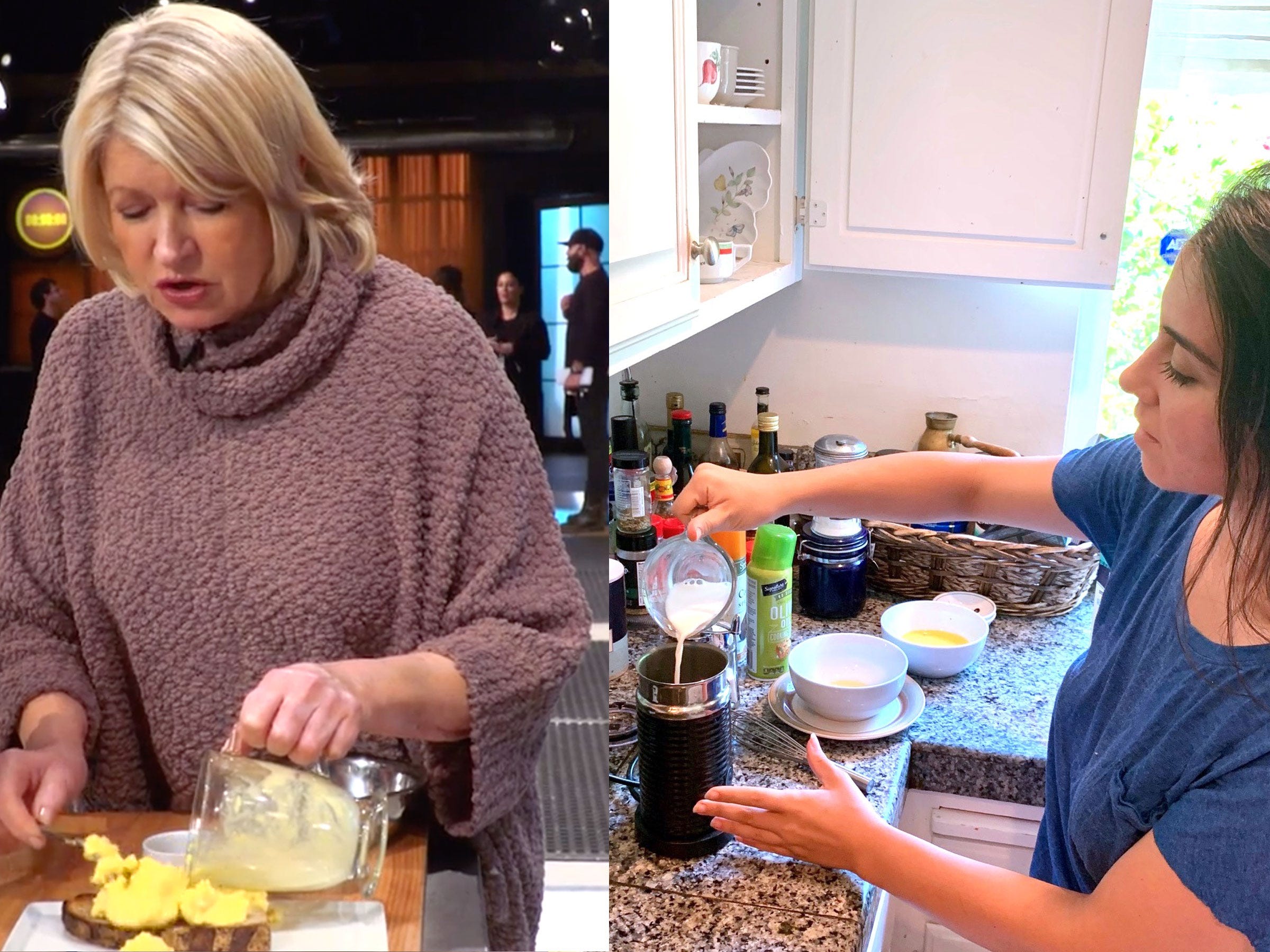 Martha Stewart has taught me many things, from her secret to cooking perfect rice to techniques for taking the perfect pool selfie.

During my recent interview with the lifestyle expert, Stewart casually revealed that she often makes her scrambled eggs with the same machine that whips up her coffee.

Never one to shy away from a good hack, I put Stewart’s trick to the test – and ended up making some of the fluffiest eggs I’ve ever tasted.

Martha Stewart sent the internet abuzz last year when she demonstrated how to make her cappuccino eggs in a clip for the Food Network. 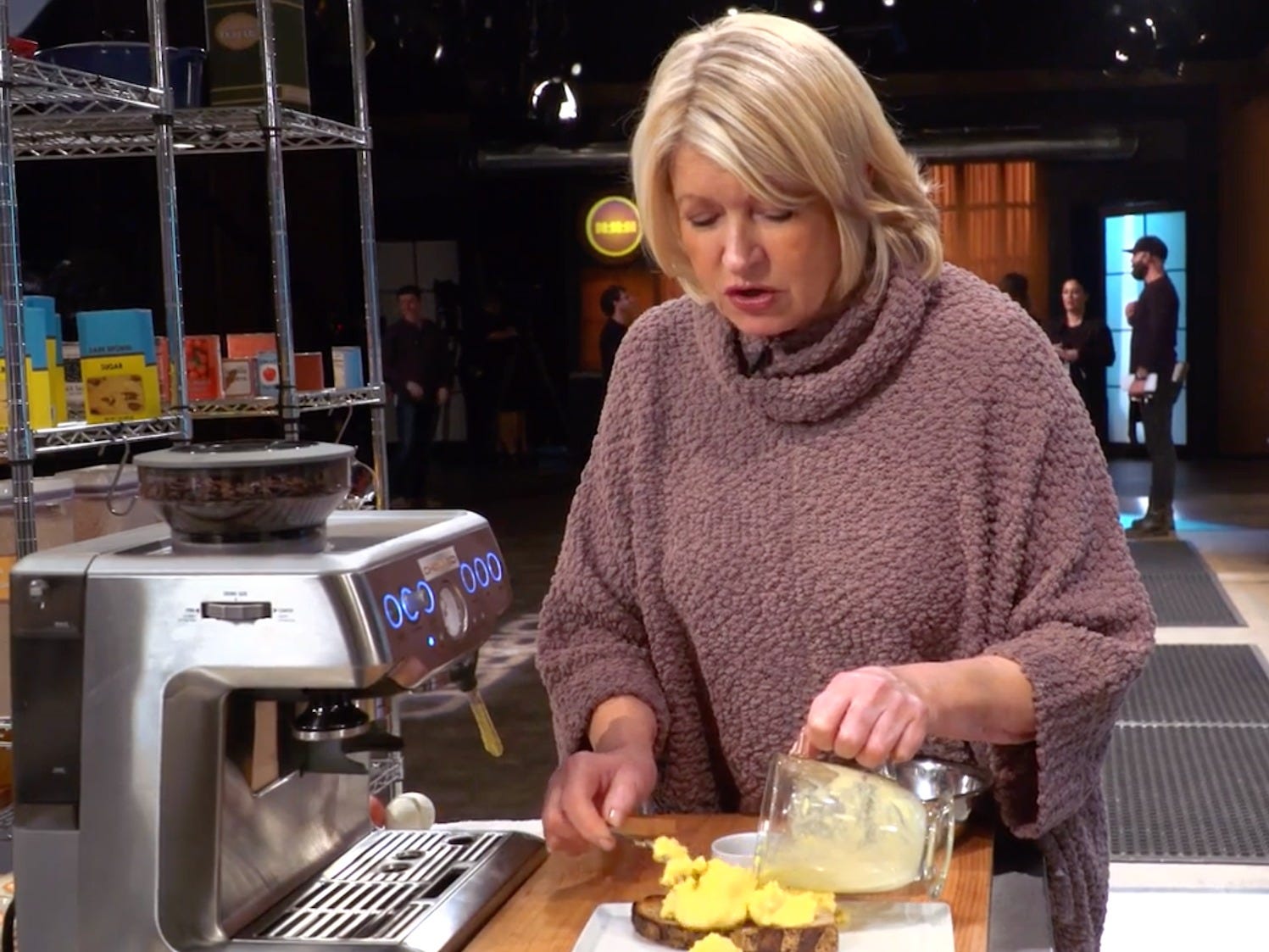 Food NetworkMartha Stewart has been making eggs in her cappuccino machine for years.

The video shows Stewart throwing some eggs into a mug and giving them a quick whisk before holding them under the steam wand of a cappuccino maker.

“It steams the eggs into the softest, fluffiest scrambled eggs. And, in just a matter of seconds, your eggs are finished,” Stewart declares as she spreads the eggs on a piece of toast. “These eggs are buttery and fluffy and light and delicious.”

After the clip made numerous headlines, Stewart’s blog revealed that the lifestyle expert has been cooking her eggs with an espresso machine for years after she learned the trick from top NYC chef Jody Williams, who owns Via Carota and Buvette.

Stewart told me about her hack in March, but I didn’t think of those cappuccino eggs again until I saw my dad’s espresso machine in the kitchen. 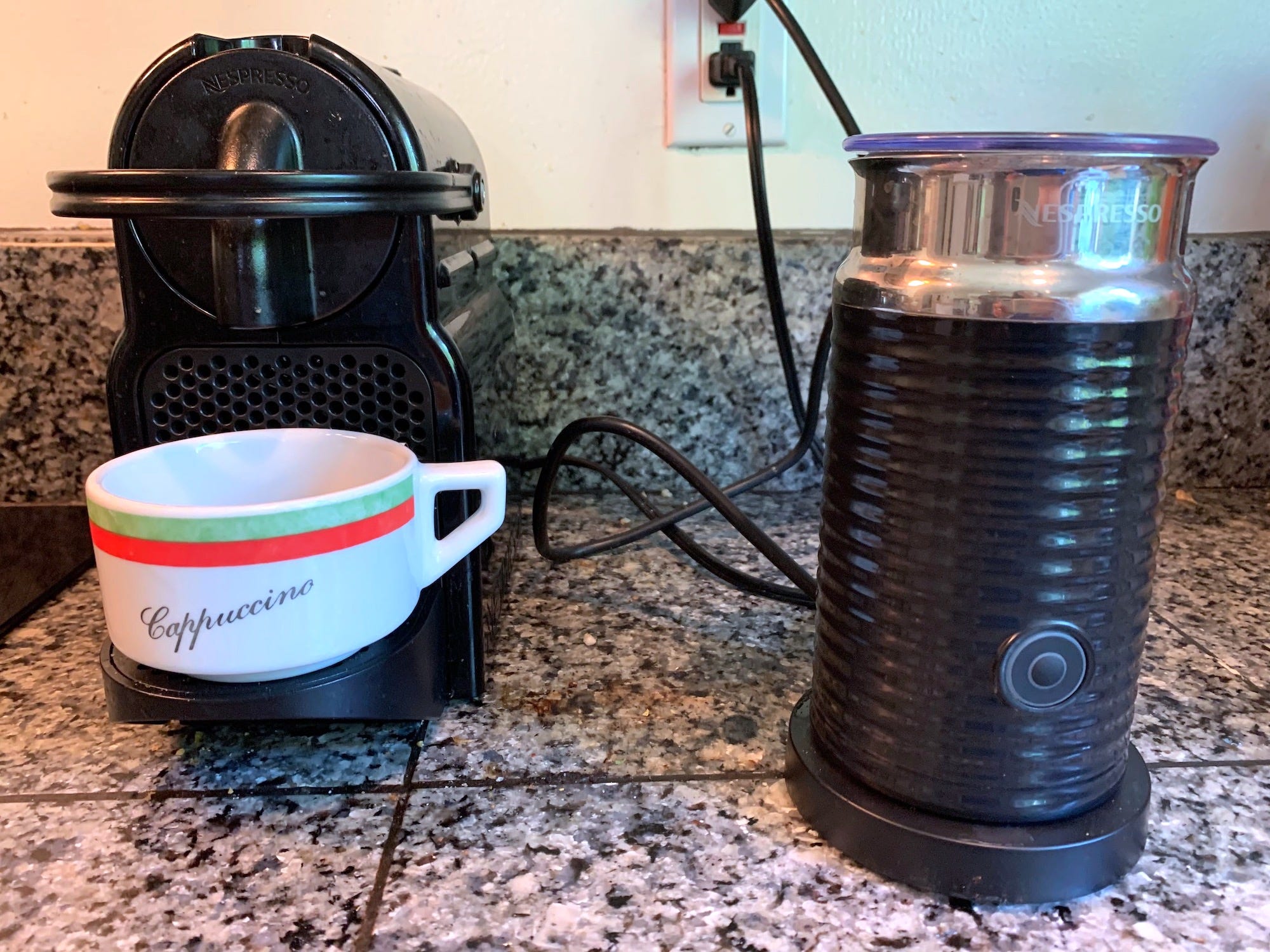 Anneta Konstantinides/InsiderWhen I saw my dad’s cappuccino maker, I knew I needed to try Stewart’s hack.

My dad has been drinking cappuccinos for as long as I can remember, and he recently treated himself to a De’Longhi espresso machine with a Nespresso milk frother.

The machine doesn’t have a steam wand like Stewart used in the clip, but I was intrigued by the milk frother. Could it have a similar effect on the eggs? Would they actually taste any different?

Since a milk frother is far more affordable than a cappuccino machine, I also wanted to see if it could be a cheaper alternative to Stewart’s trick.

I first did a dry run of the hack, making a couple of different omelettes by pouring just eggs into the milk frother. 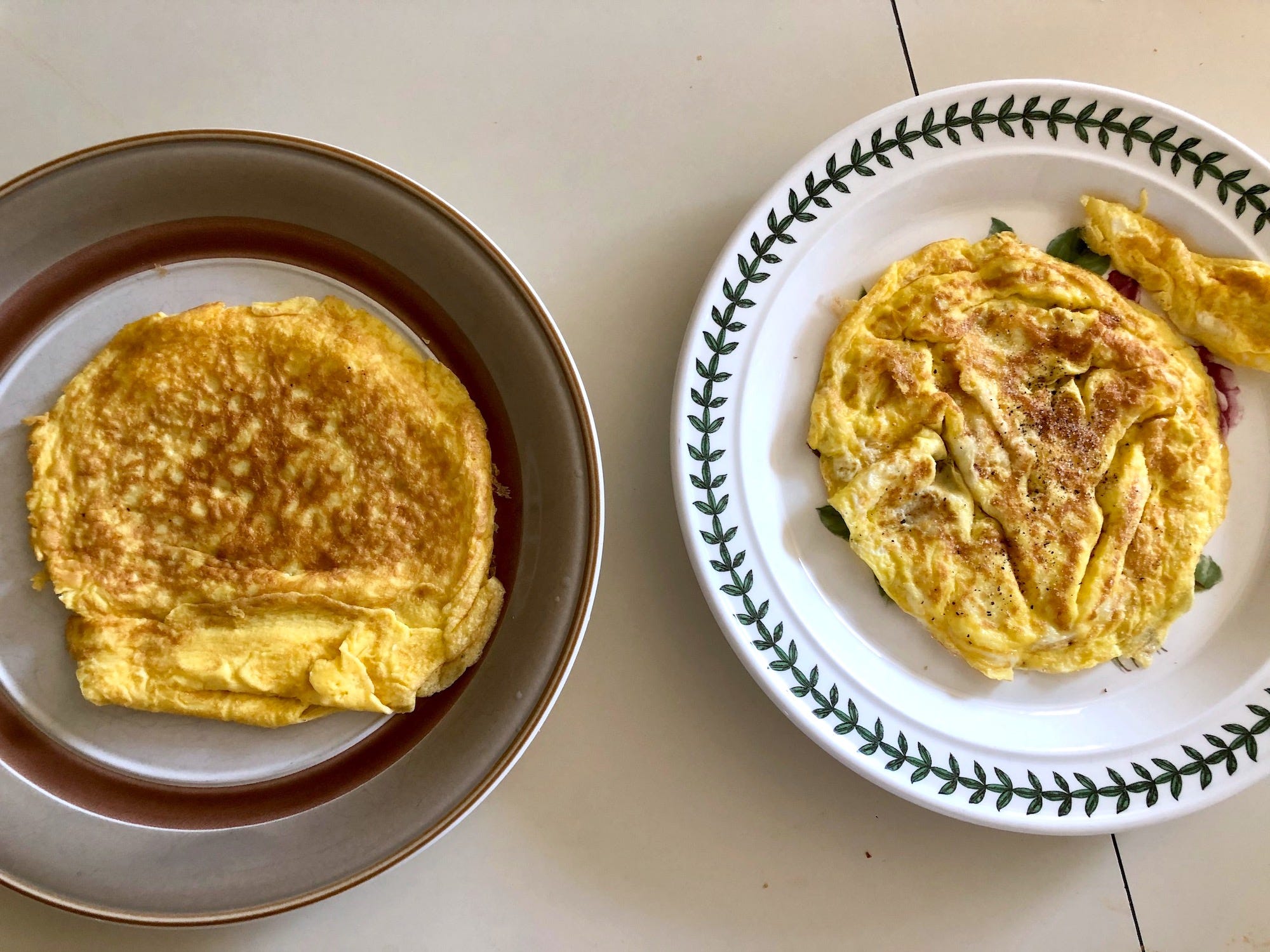 Anneta Konstantinides/InsiderFirst I tried putting just eggs into the Nespresso, but the omelettes didn’t taste any different.

The Nespresso frother has two different settings, for hot or cold foam. I tried making eggs on both settings, putting them in the frother before cooking each omelette in the pan.

The results weren’t exactly impressive. Both of the omelettes tasted nearly indiscernible from my control omelette, which I had made without using the frother.

But when I put some milk into the frother first and then mixed it with the eggs, everything completely changed.

Before I tell you more about my cappuccino eggs, let me show you the control omelette — which I made without any help from the Nespresso. 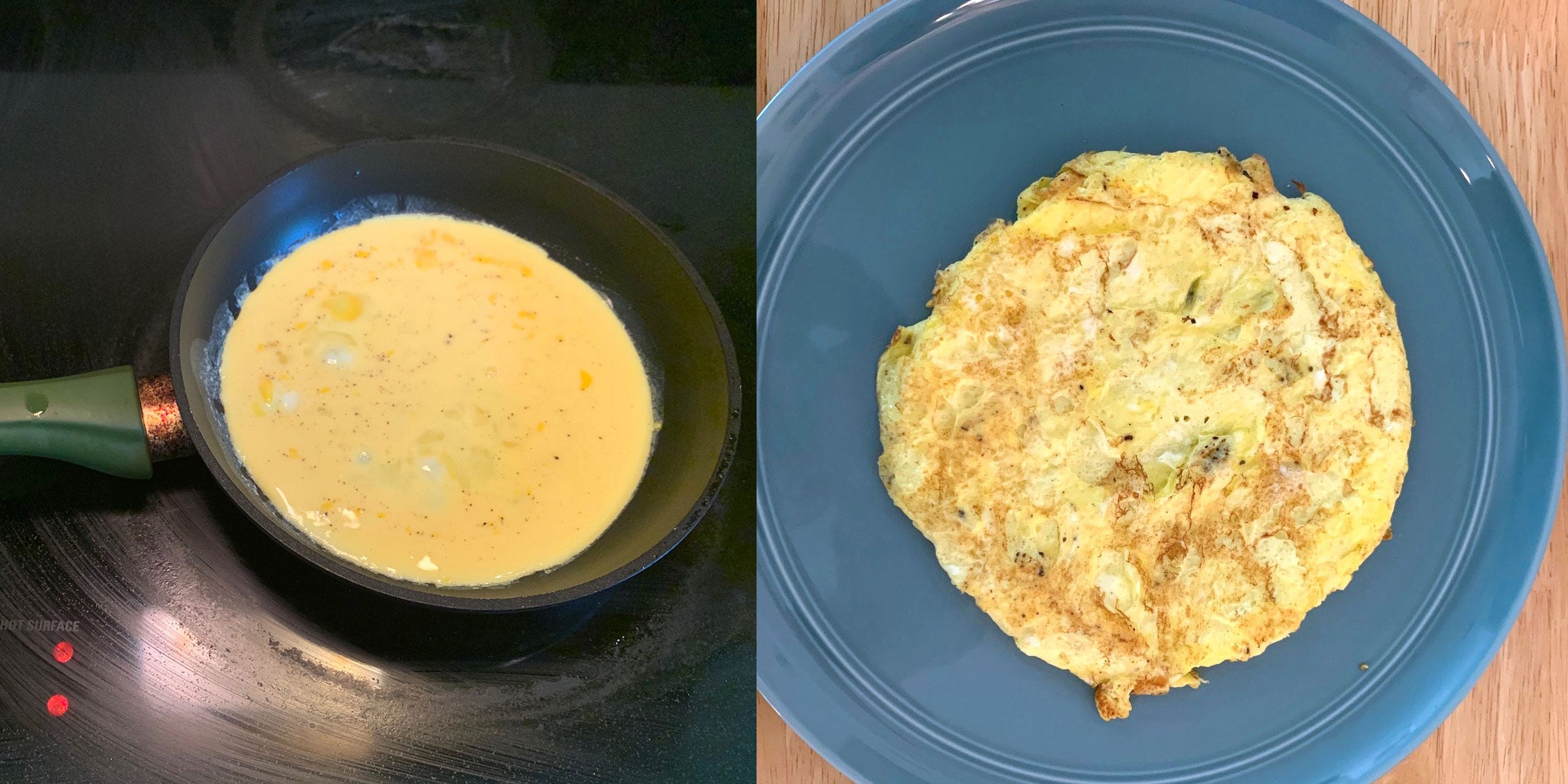 Anneta Konstantinides/InsiderThis is my control omelette, made without the milk frother.

I kept all my measurements the same for each test, using two eggs and two ounces of 2% milk (plus salt and pepper of course).

Then it was time to experiment. First, I tried whisking my eggs with milk before pouring the mixture into the frother. 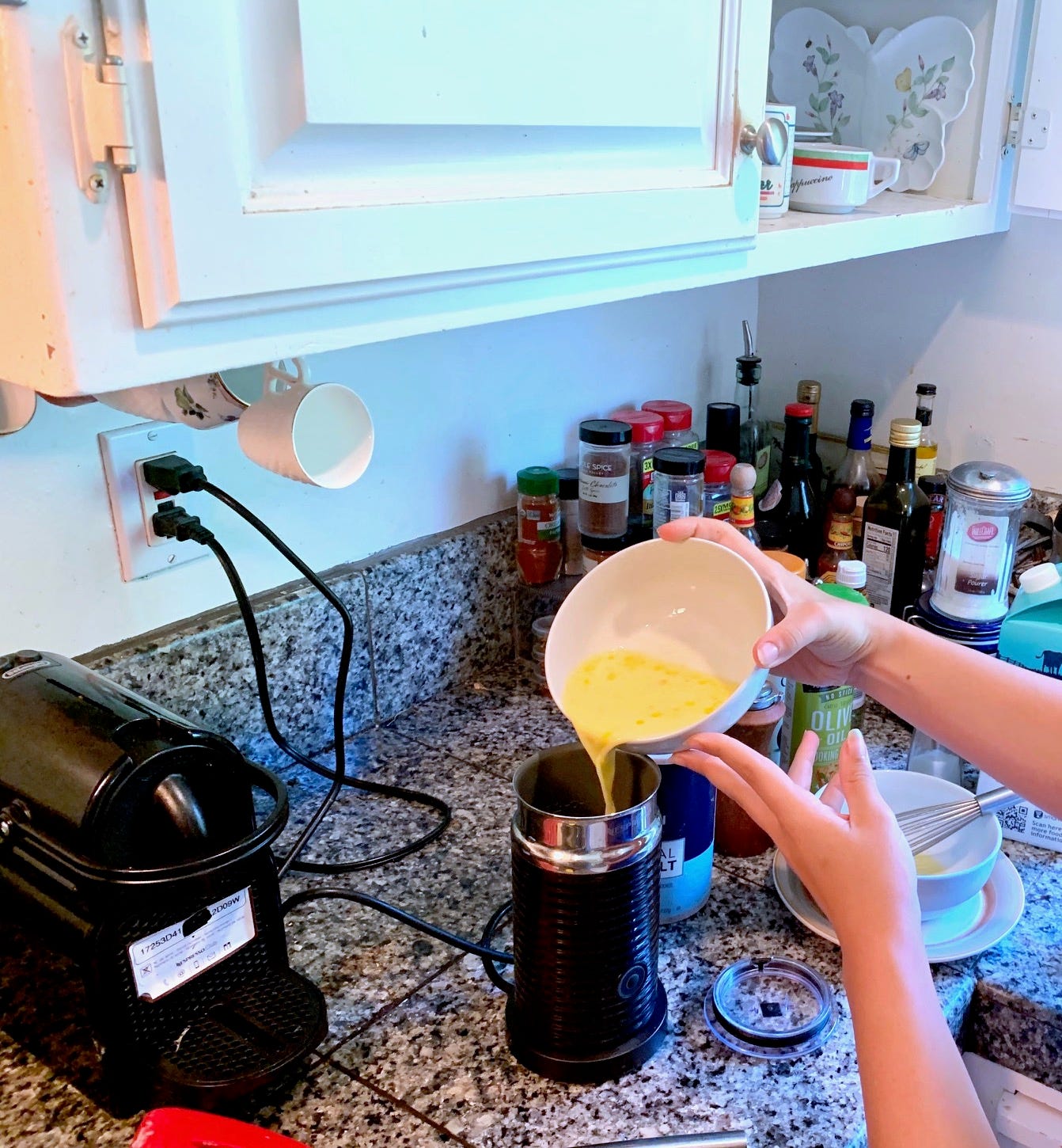 Anneta Konstantinides/InsiderI tried using the frother with both eggs and milk at first.

Since Stewart actually cooks her eggs with a cappuccino machine, I knew my experiment needed to include one test with eggs from the frother.

While my trial run proved that only putting eggs in the frother made little difference, I wondered if adding milk into the mix might change things.

I took off the cap and watched the Nespresso get to work. 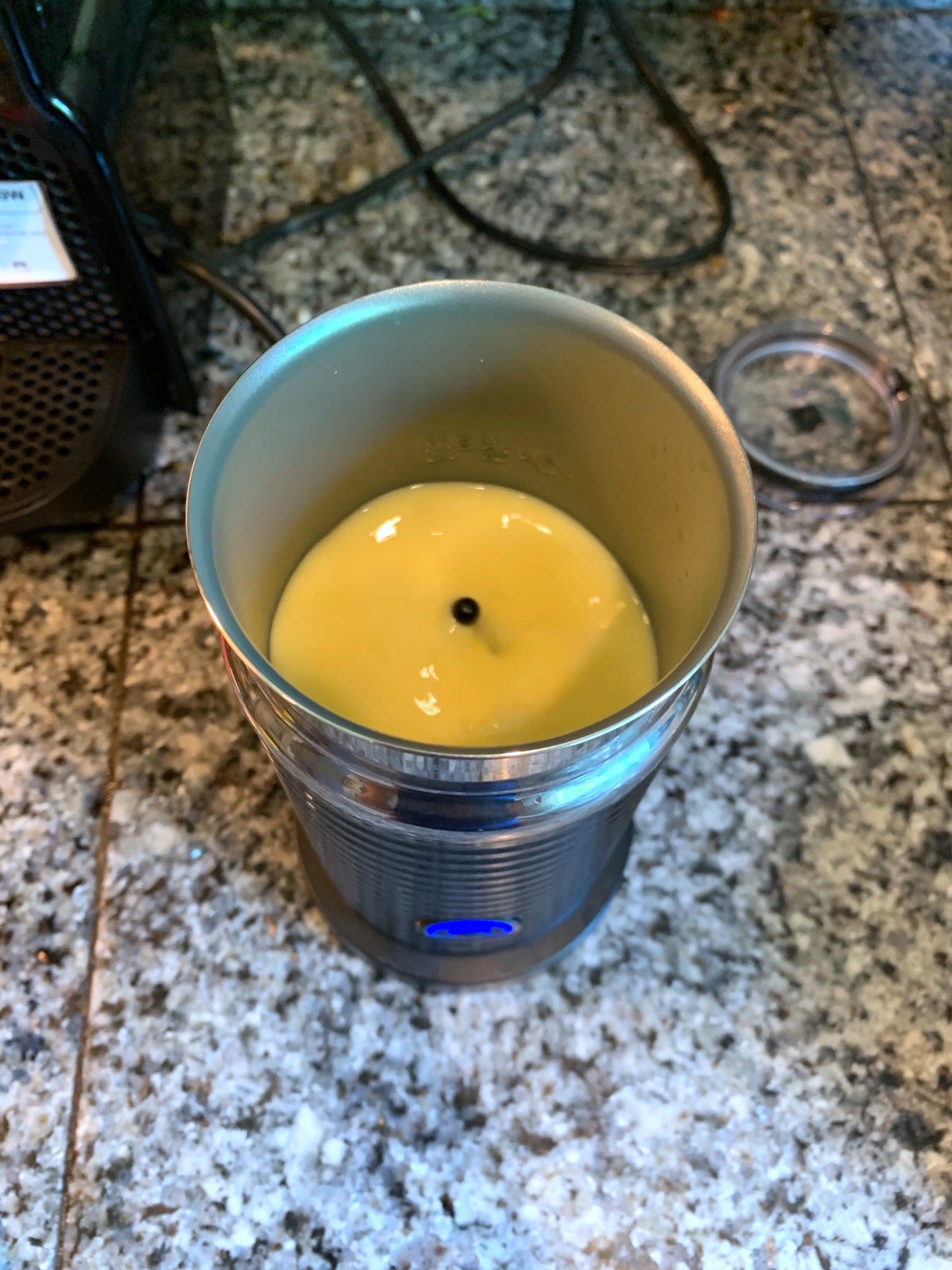 Anneta Konstantinides/InsiderThe Nespresso mixed the eggs and milk around.

I selected the Nespresso’s cold setting and watched as the yellow liquid began to swirl around, waiting for the frother to automatically shut off once it was done.

Then I poured the mixture into a heated pan, hoping to see a dramatic difference. 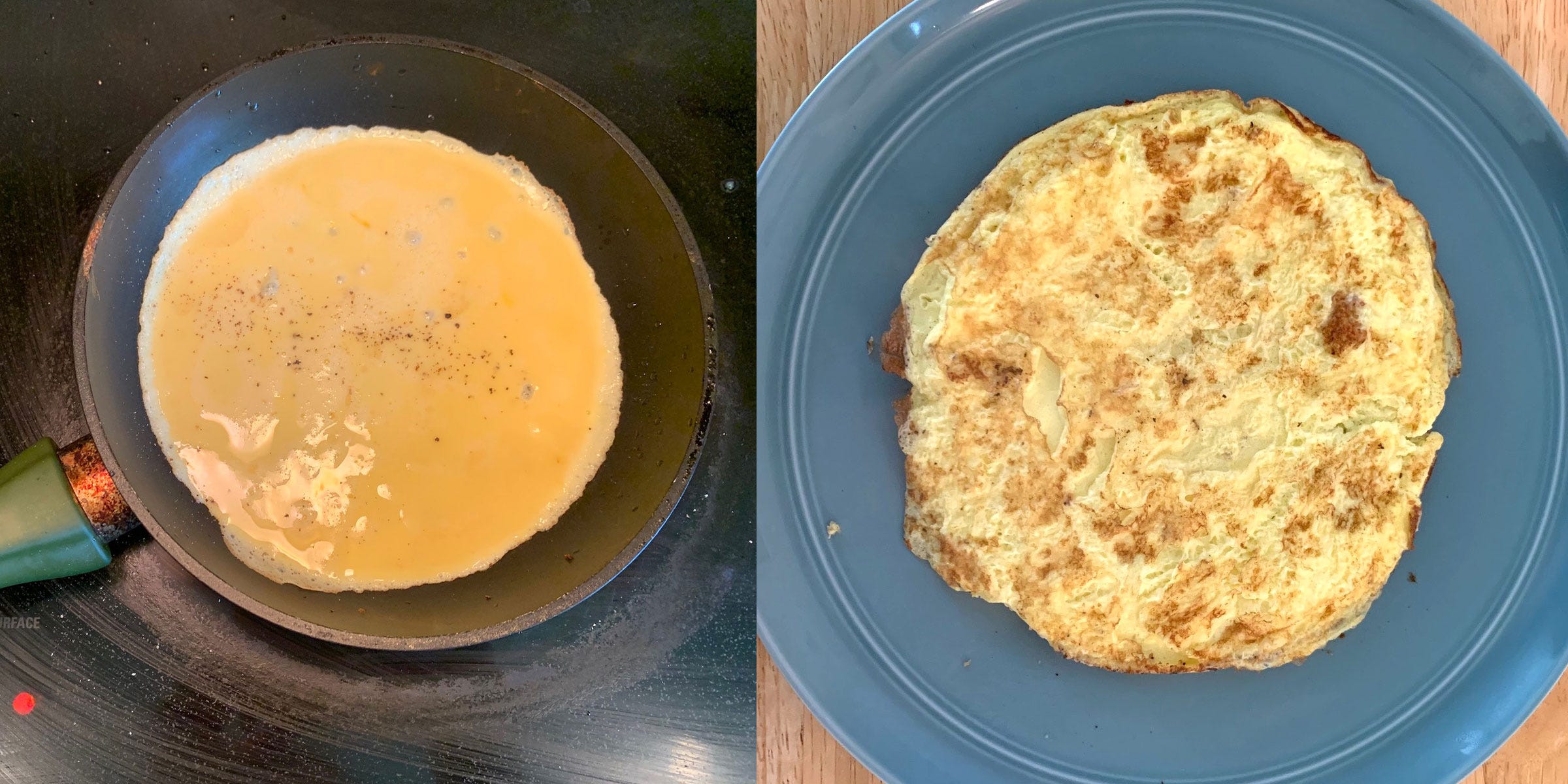 But the omelette looked pretty similar to my control version – and it tasted nearly identical as well.

There wasn’t any discernible difference in the consistency or texture. It just tasted kind of sad and flat.

On to the next one.

Then, I tried putting milk into the frother before mixing it with the eggs to see if it would make a big difference. 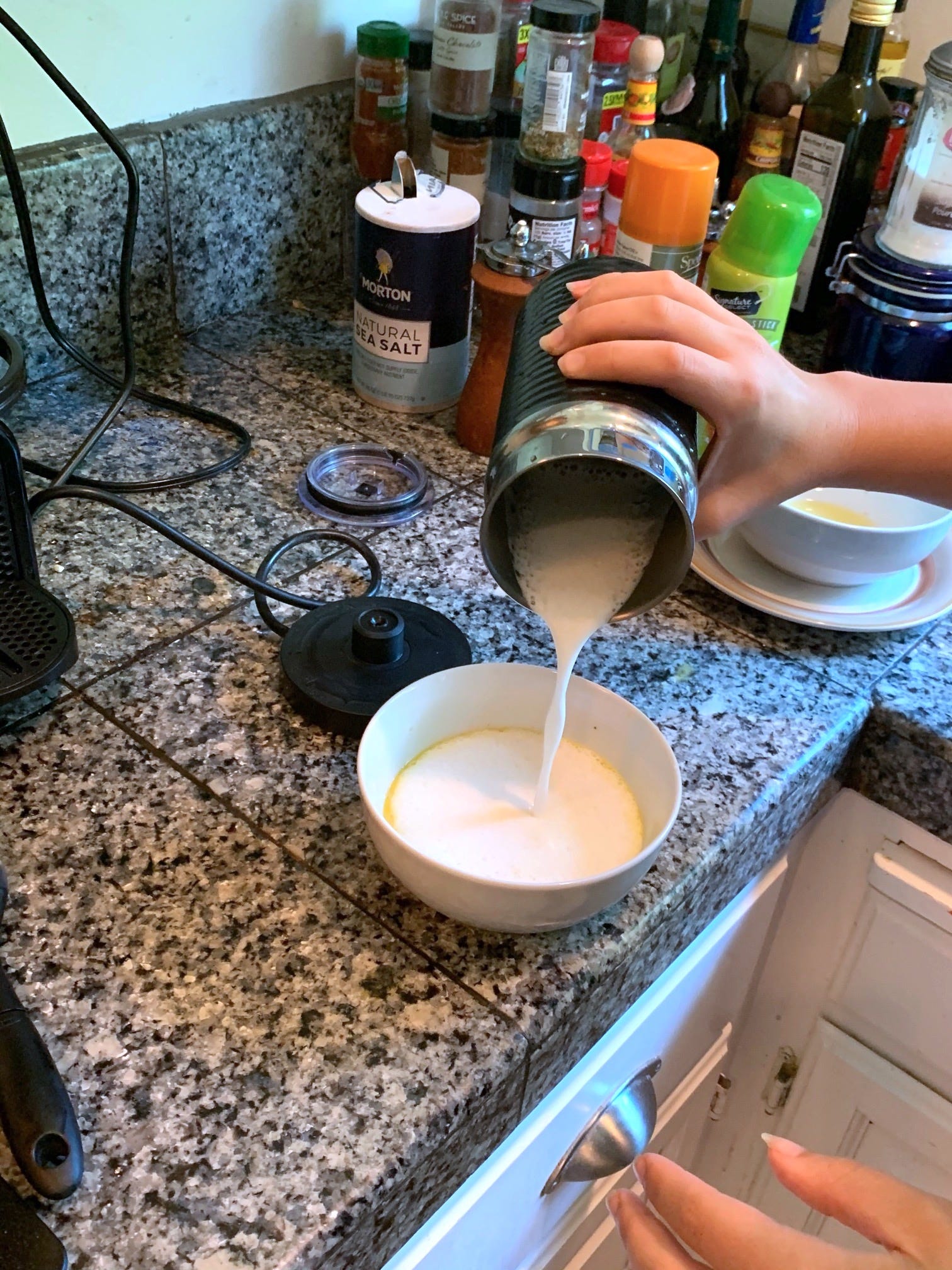 I tried the Nespresso’s cold setting first, and my hopes were high as I poured the frothy milk on top of the eggs – which instantly disappeared underneath the foam.

After I whisked the mixture and poured it into a heated pan, I could already tell that the omelette looked fluffier. 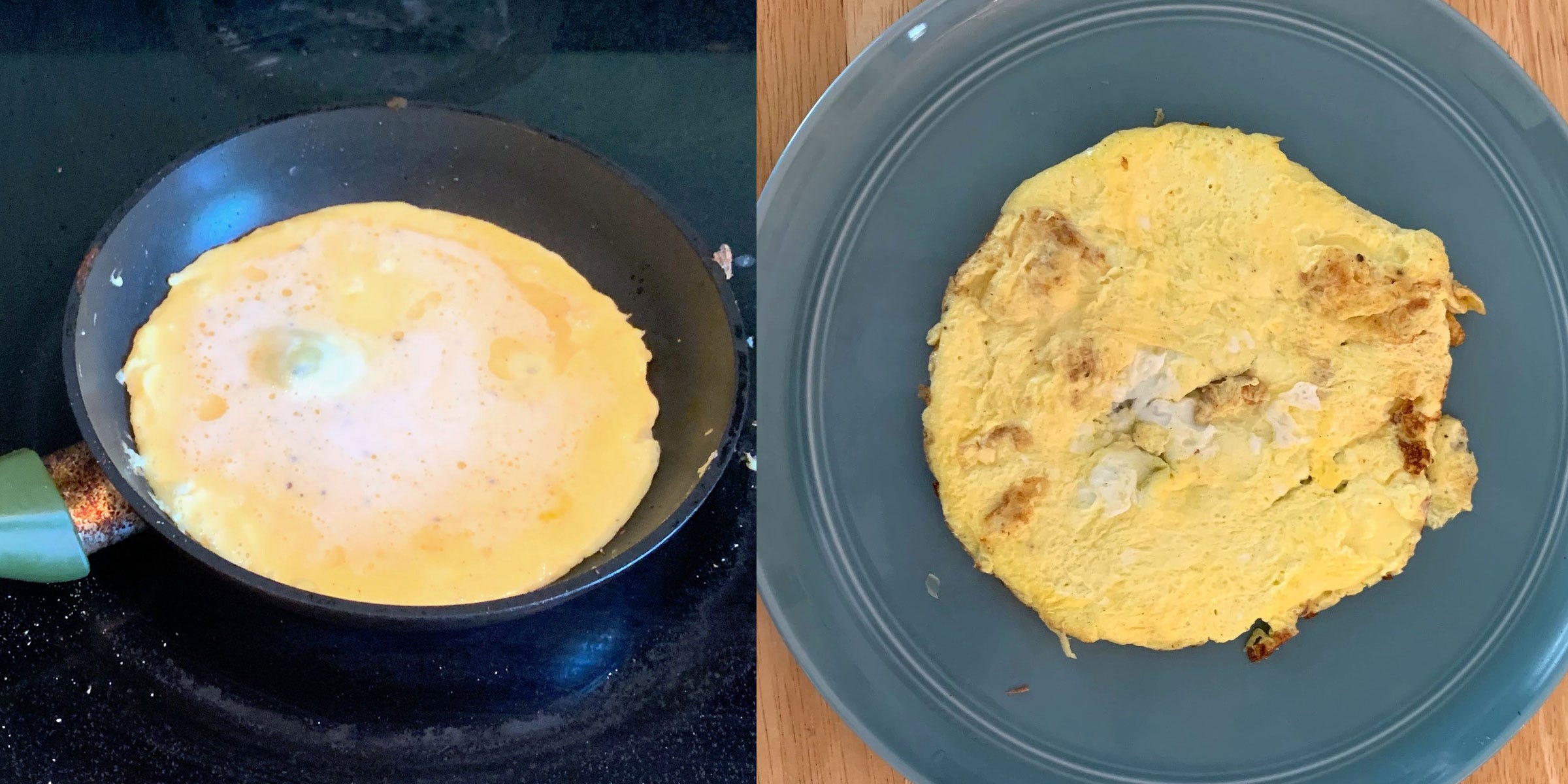 Anneta Konstantinides/InsiderThe omelette puffed up more in the pan and the eggs tasted a little fluffier.

But alas, the result still wasn’t what I was hoping for.

The eggs definitely tasted a little fluffier and smoother. But, after seeing how much they had puffed up in the pan, I was expecting the difference to be far more dramatic.

So I ran one more omelette test.

Since just putting milk in the frother clearly had a better effect, I left out the eggs again. But this time I used the Nespresso’s hot setting. 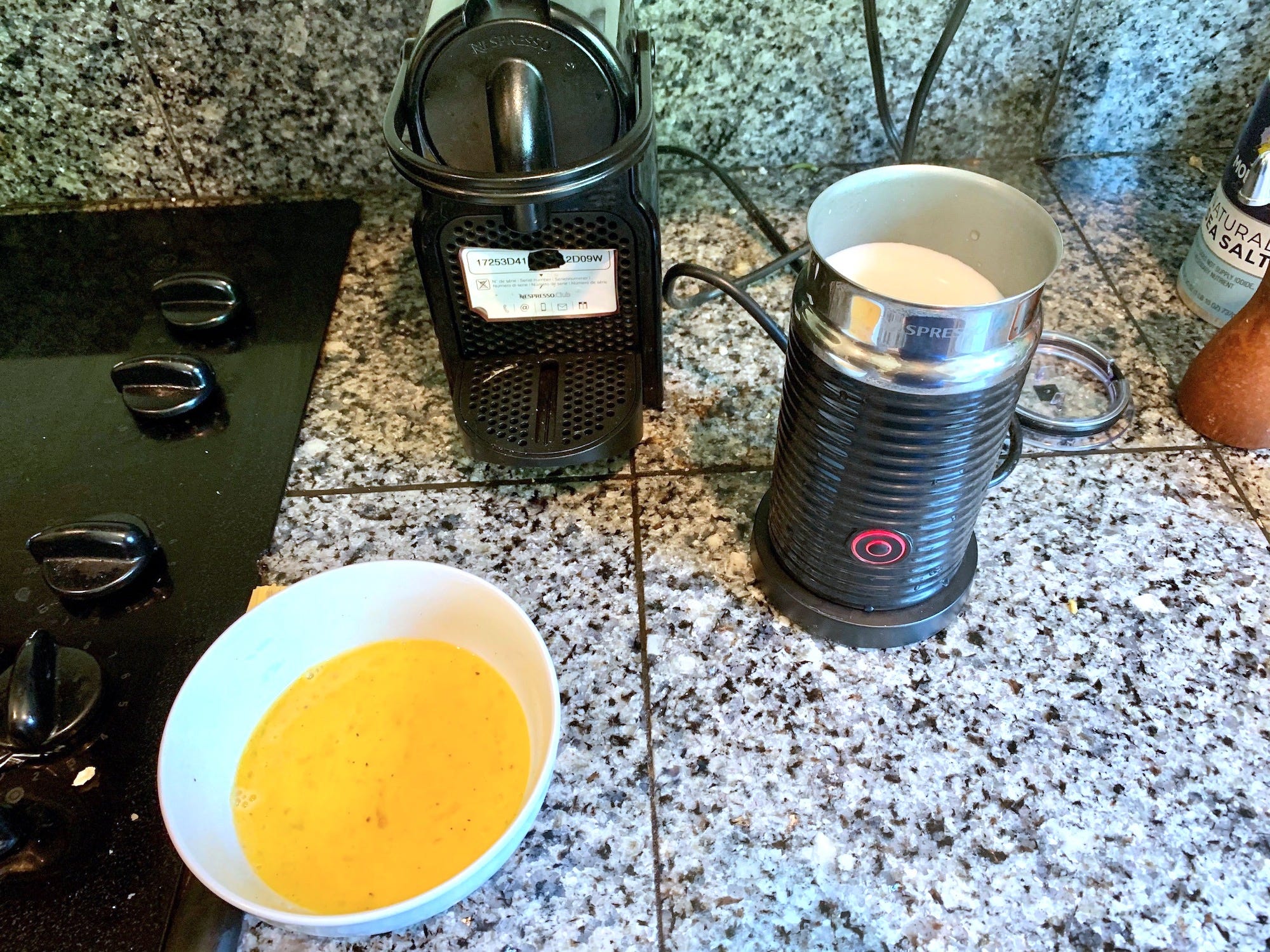 Anneta Konstantinides/InsiderThis time, I tried the frother on the hot setting.

I could see steam rising from the frother as it whirred the milk around. And when I poured the milk into the eggs, the mixture was so frothy that it actually looked like the top of a cappuccino.

Once I threw the mixture into the pan, the difference was obvious. 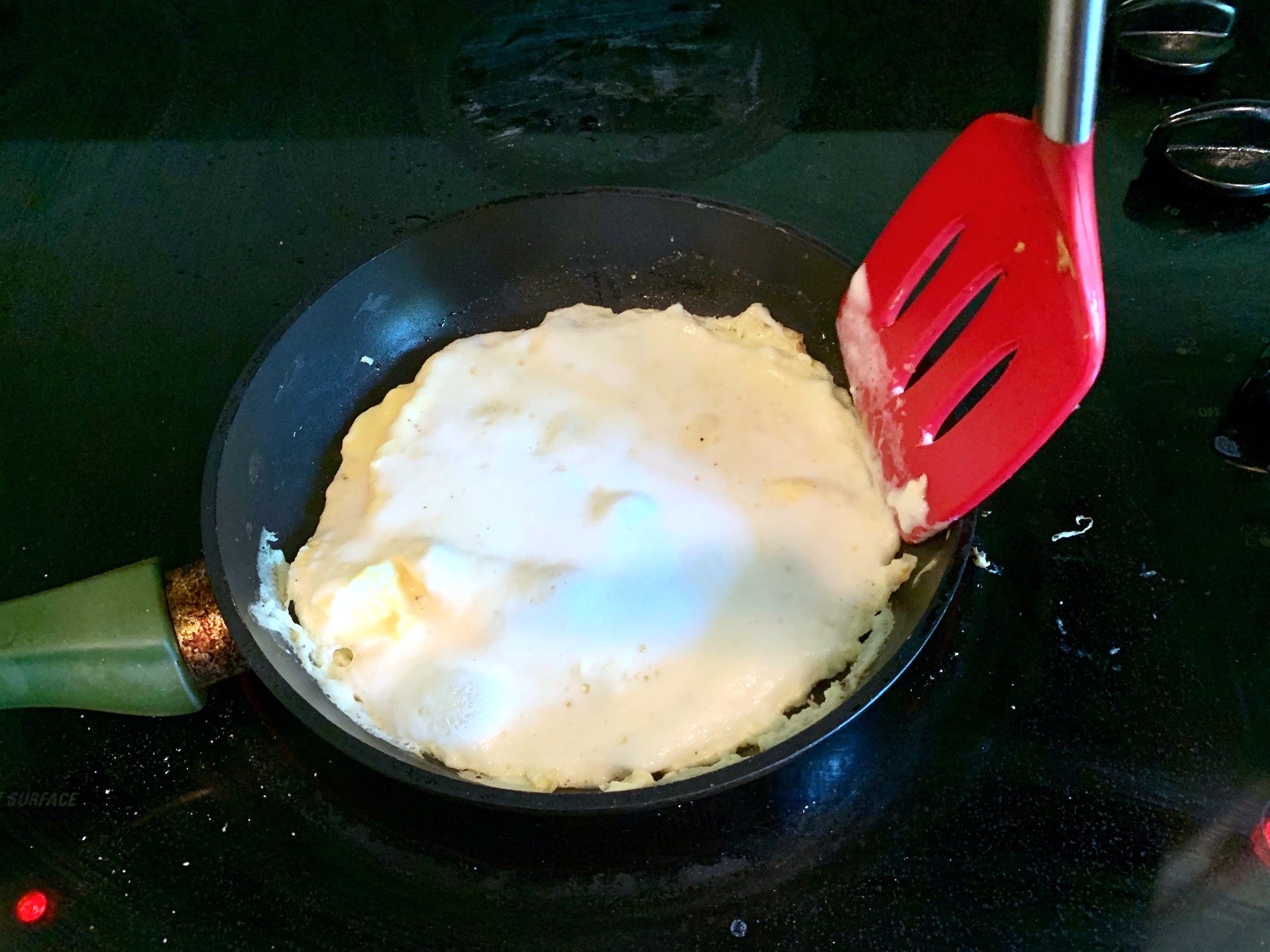 Anneta Konstantinides/InsiderThe eggs were significantly fluffier in the pan.

The omelette immediately puffed up when it hit the heat, like it was ready to take on a life of its own.

The eggs were bubbling so much they almost looked like a fluffy cloud or soft pillow.

It was clear that the omelette was far fluffier than the first three. Better yet? It tasted amazing. 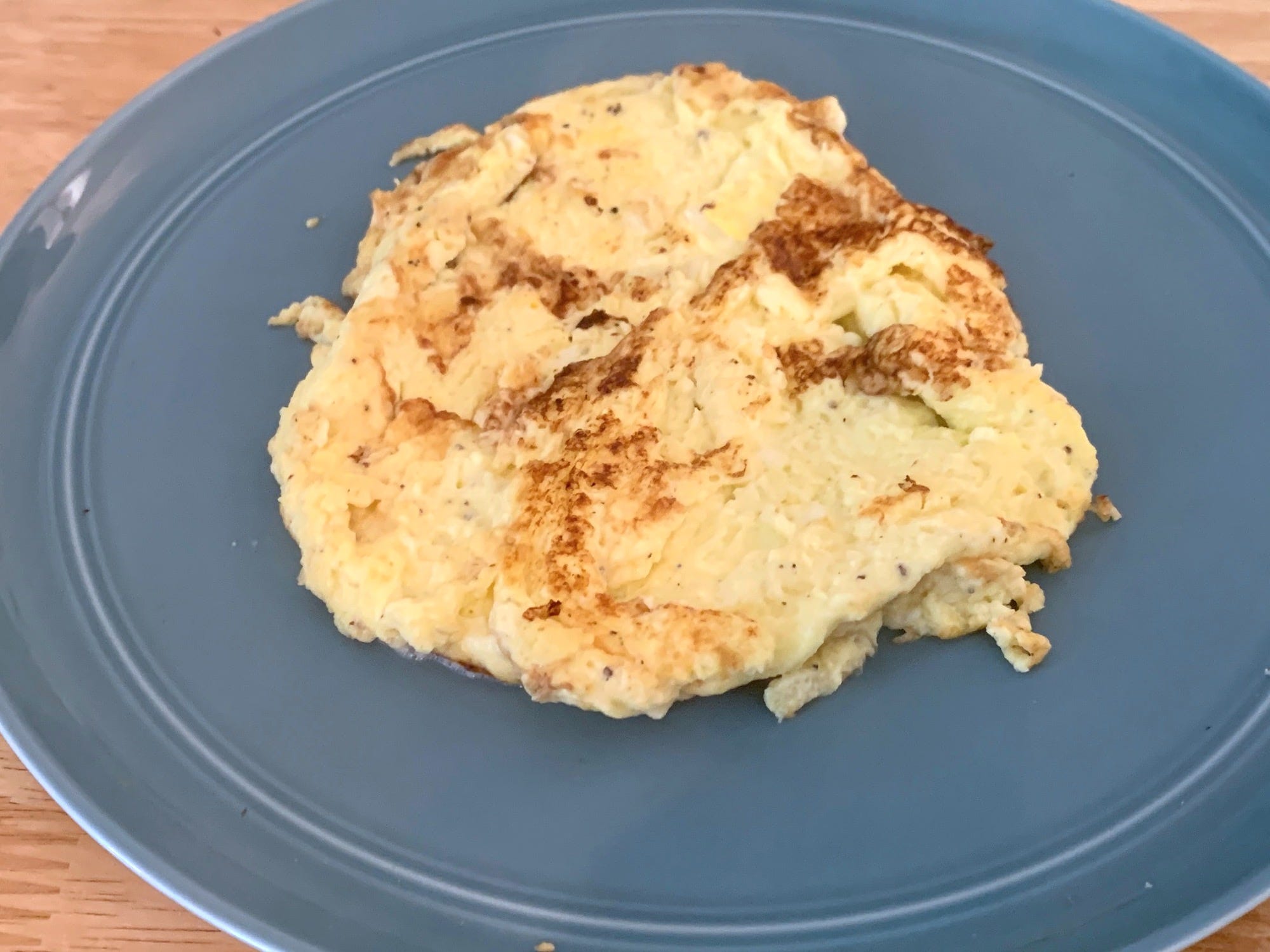 This was, without a doubt, the fluffiest omelette I’ve ever had. The eggs were so soft, creamy, and smooth. I had already sampled three omelettes in the span of 15 minutes, and yet I didn’t want to stop eating it.

I didn’t realise how dense my usual omelettes were until I had something else to compare them to. It was like eating chocolate mousse instead of cake – just, you know, with eggs.

My dad, who offered to help me eat a bunch of omelettes for the day (and make sure I didn’t ruin his cappuccino machine), agreed.

“It feels lighter,” he said as he took another bite.

After I worked out the kinks in the experiment, I decided to try making scrambled eggs with the frother as well. 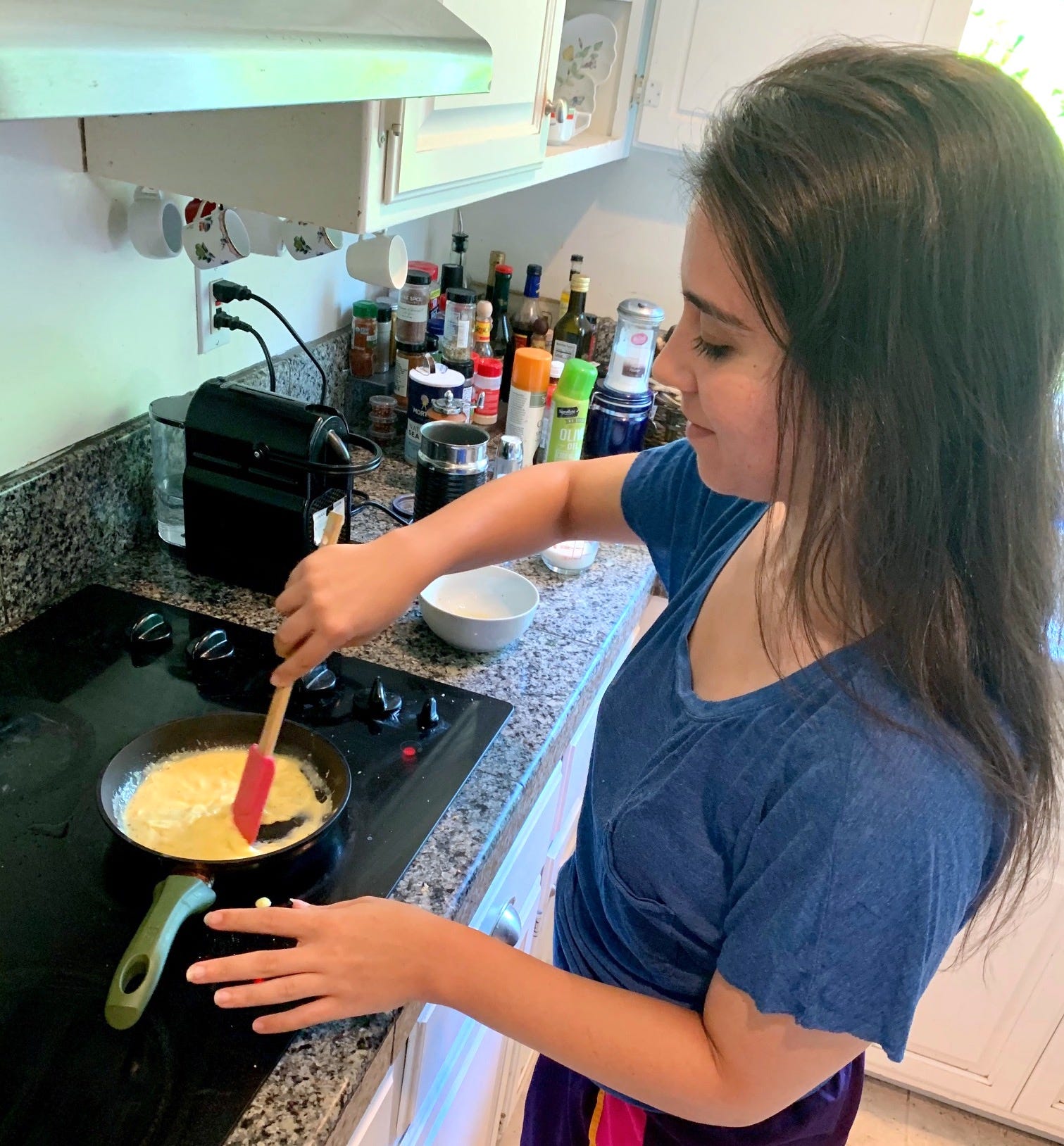 Anneta Konstantinides/InsiderAfter the fluffiest omelette, I wanted to see if it would improve scrambled eggs.

Now that I knew how much of a difference the Nespresso setting made, I decided to just make a control version of scrambled eggs on the stove and compare it to scrambled eggs made with hot milk from the frother.

For my control, I just mixed two eggs together with my two ounces of milk and slowly began pushing them around the pan. 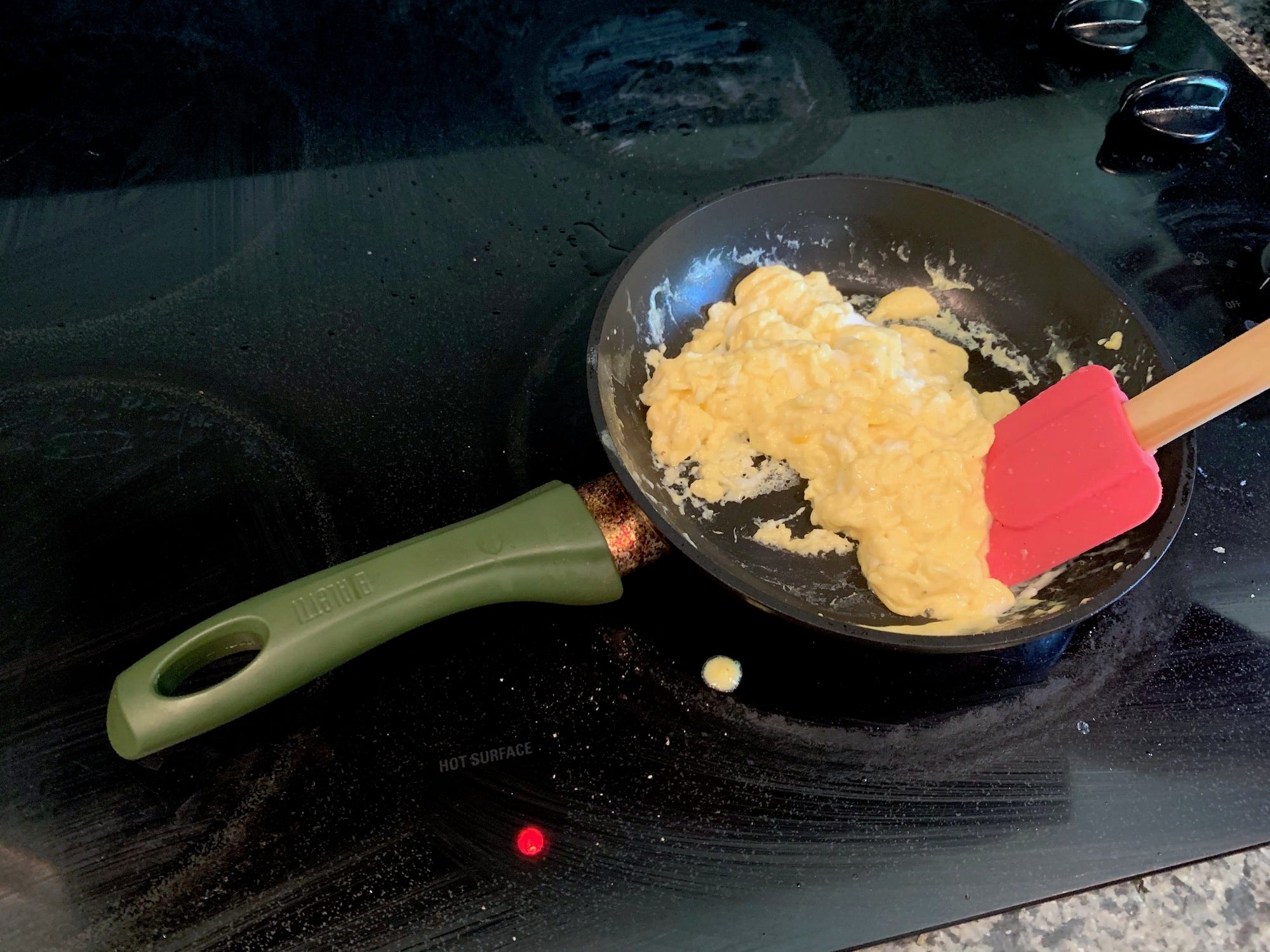 I like my scrambled eggs really creamy and a little runny, and wanted to see how my usual technique would match up with the frother hack.

When I began making my scrambled eggs with milk from the frother, I was shocked to see how different the mix already looked when it hit the pan. 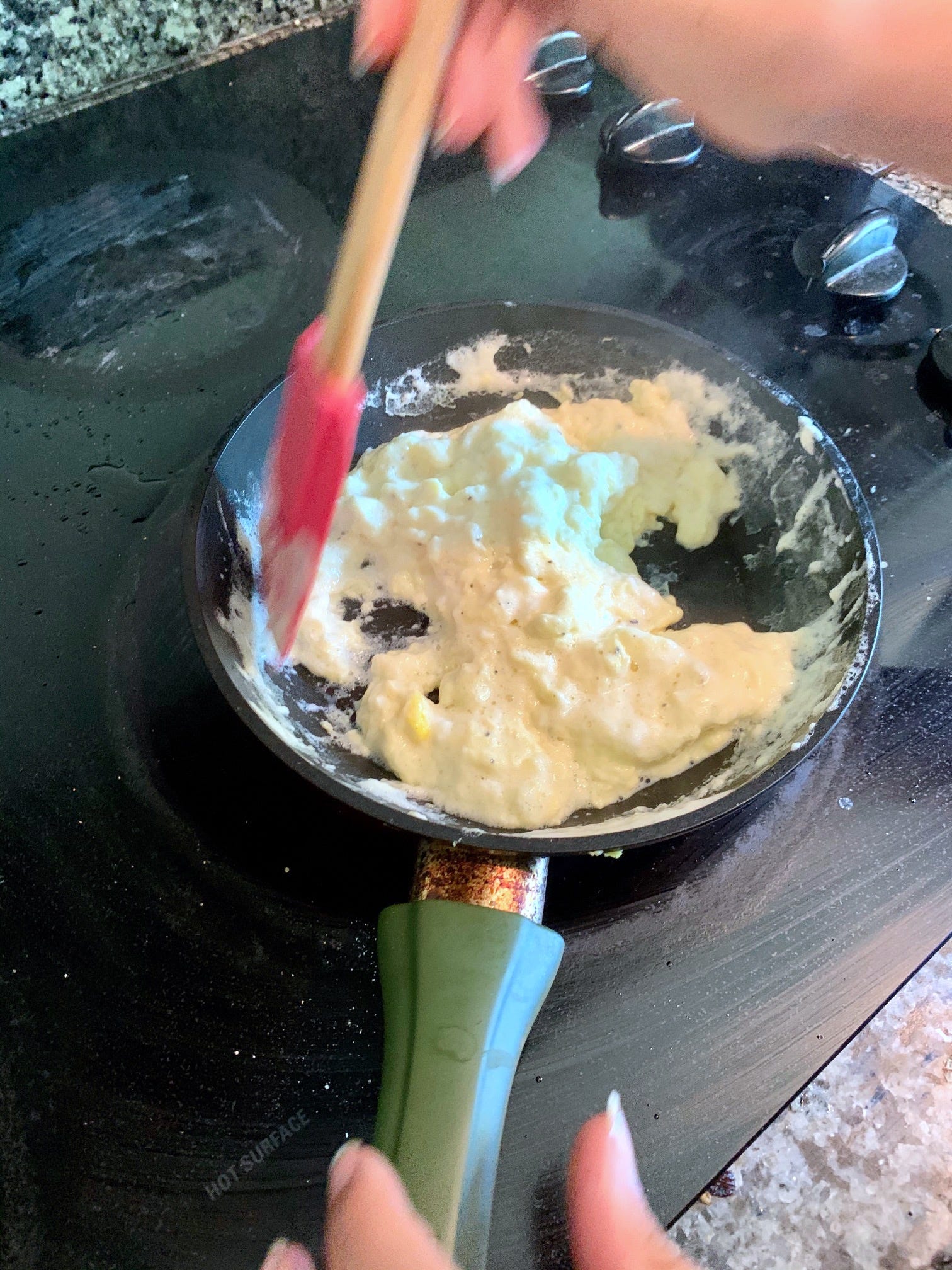 Anneta Konstantinides/InsiderThe eggs with hot milk from the frother were noticeably creamier.

The yellow colour was far more pale and – although there was the same amount of milk in each mix – my frother eggs seemed to nearly double in volume.

When I put the two plates of scrambled eggs next to each other and gave them a taste, the winner was clear. 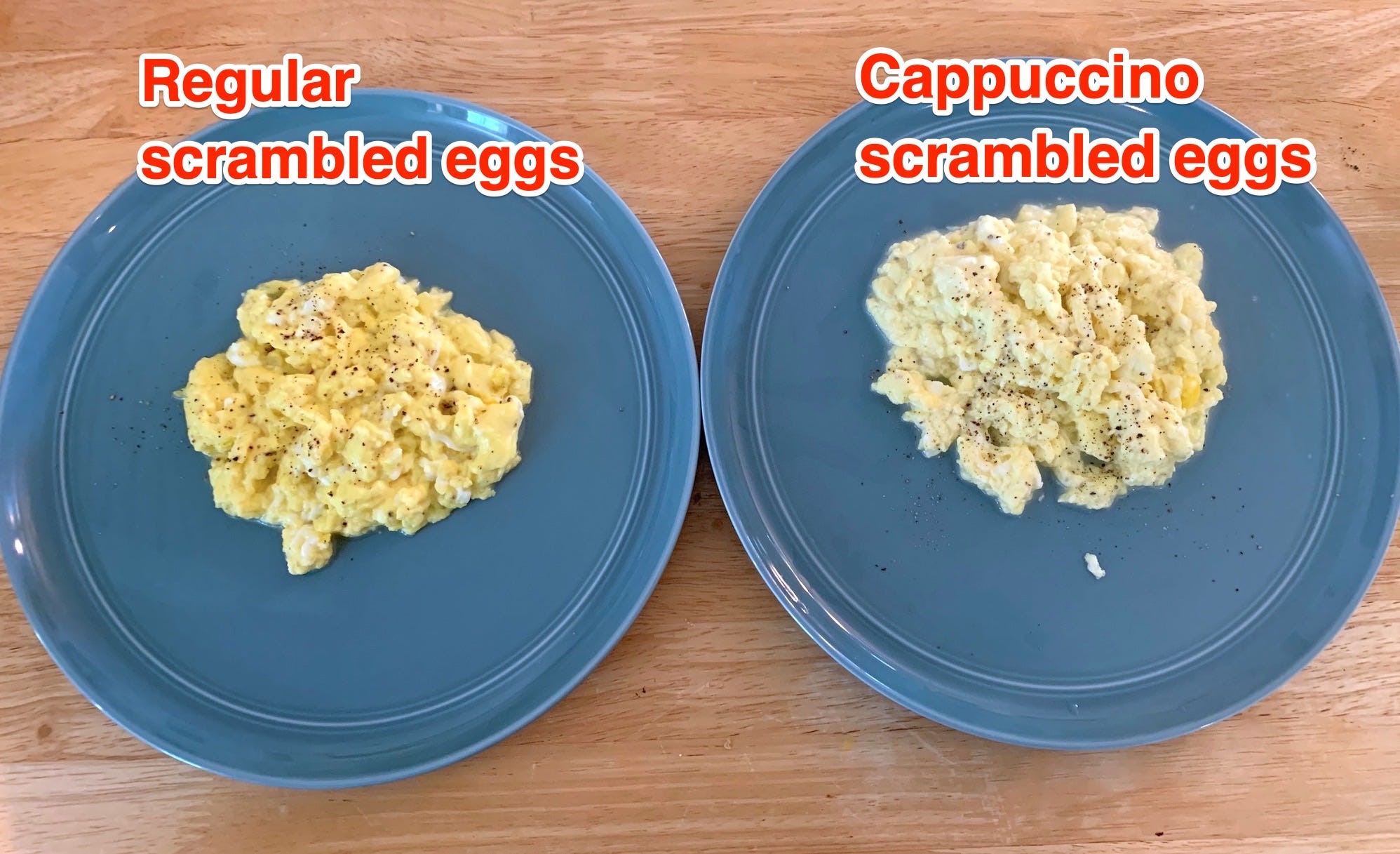 Just as with my omelette experiment, the Nespresso machine made a huge difference.

My frother eggs were definitely fluffier and creamier. I wrote in my notes that their consistency was almost “like whipped cream,” while my dad described them as “pillowy.”

After many rounds with the frother — and many, many eggs — it was clear that a cappuccino machine can do more than just make coffee. 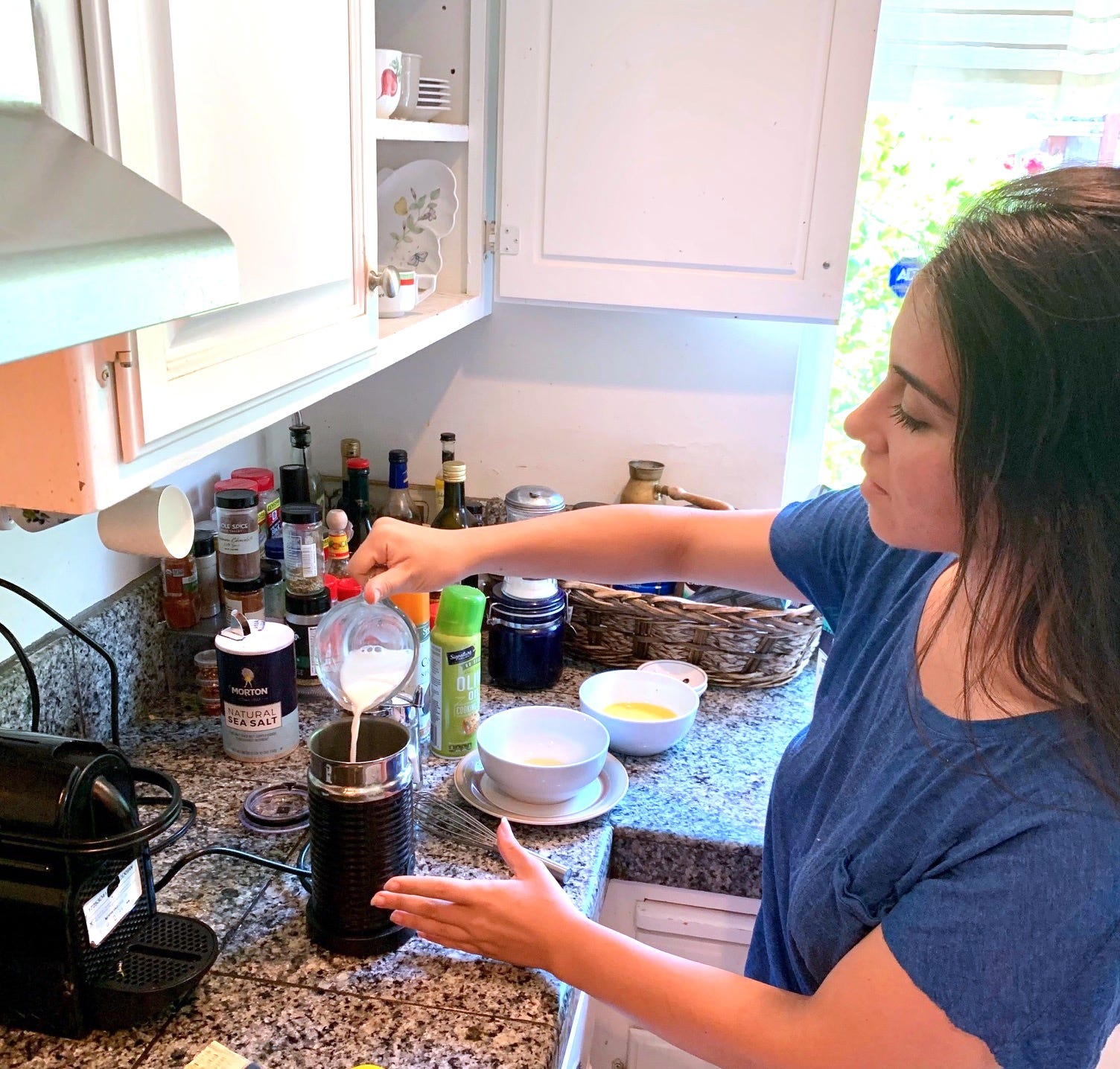 While the frother didn’t dramatically alter the appearance of my omelettes or scrambled eggs, certain settings improved the taste.

Even with slightly different tools, I was able to use Stewart’s hack and make some of the best homemade eggs I’ve ever had.

As my dad declared: “You pour the coffee, you start the milk frother, time for your best omelette ever!”