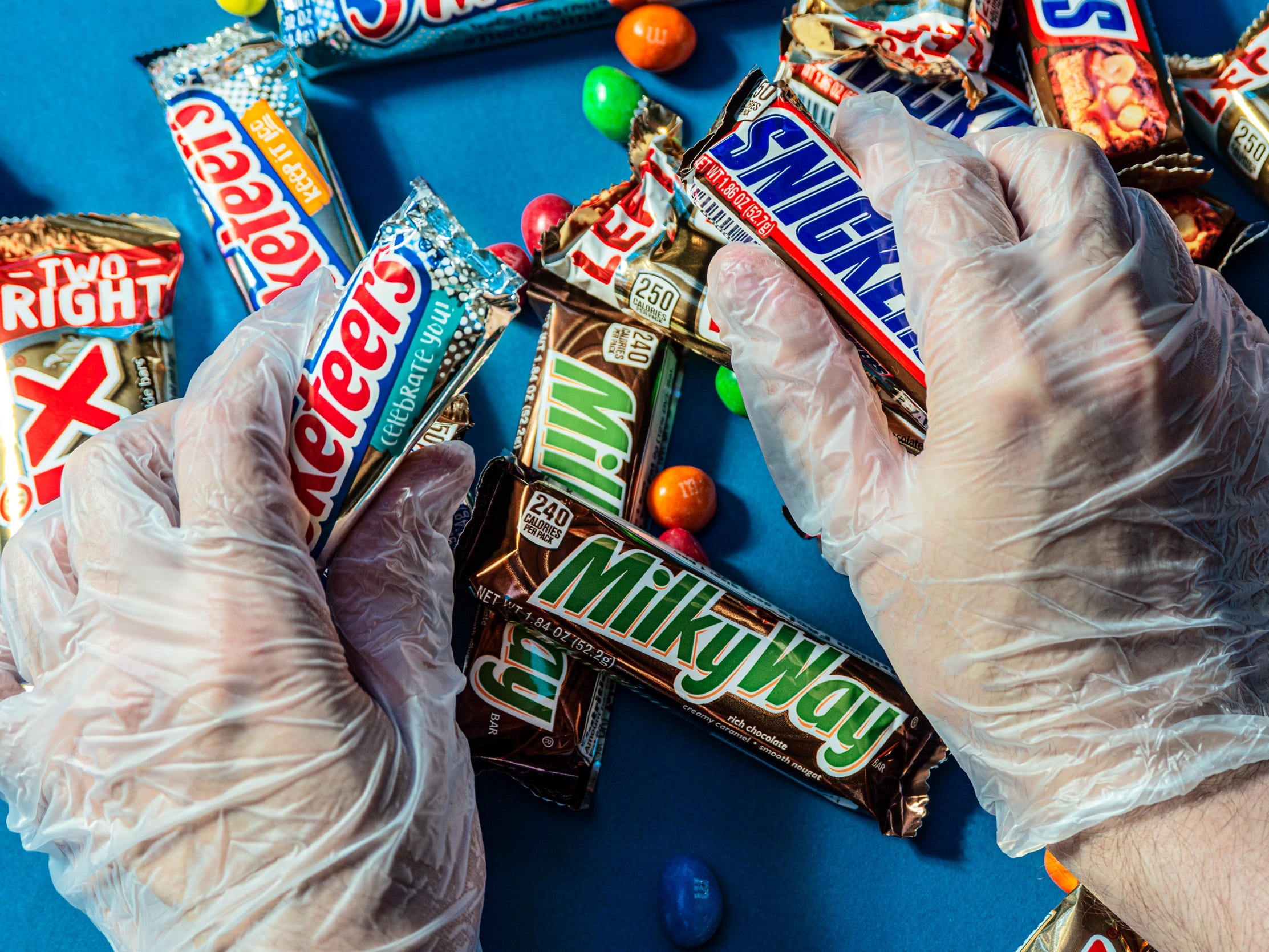 Hollis Johnson/Business InsiderInside the battle to get hazard pay at a Mars Wrigley’s warehouse.

Michael Samuel said he used to spend 10 hours a day, seven days a week loading trucks with popular Halloween candy like Snickers, M&M’s, and Twix â€” until October 1, when he was fired from his job at a Mars Wrigley distribution centre.

Samuel, 45, said he joined the Mars distribution centre near Chicago in 2017 as a forklift operator, having been hired through the logistics firm DHL.

Samuel was part of a group of workers from the warehouse in Joliet, Illinois, organising to demand hazard pay and better working conditions during the COVID-19 pandemic. Essential employees of many large companies have fought for better benefits since the pandemic broke out earlier this year.

As shoppers are set to spend $US8 billion on Halloween this year, including 25% more on candy purchases than in recent years, some workers warn of a nightmare within the Mars distribution centre.

Samuel said he had been reprimanded by supervisors for taking bathroom breaks to wash his hands and spending extra time wiping down equipment. 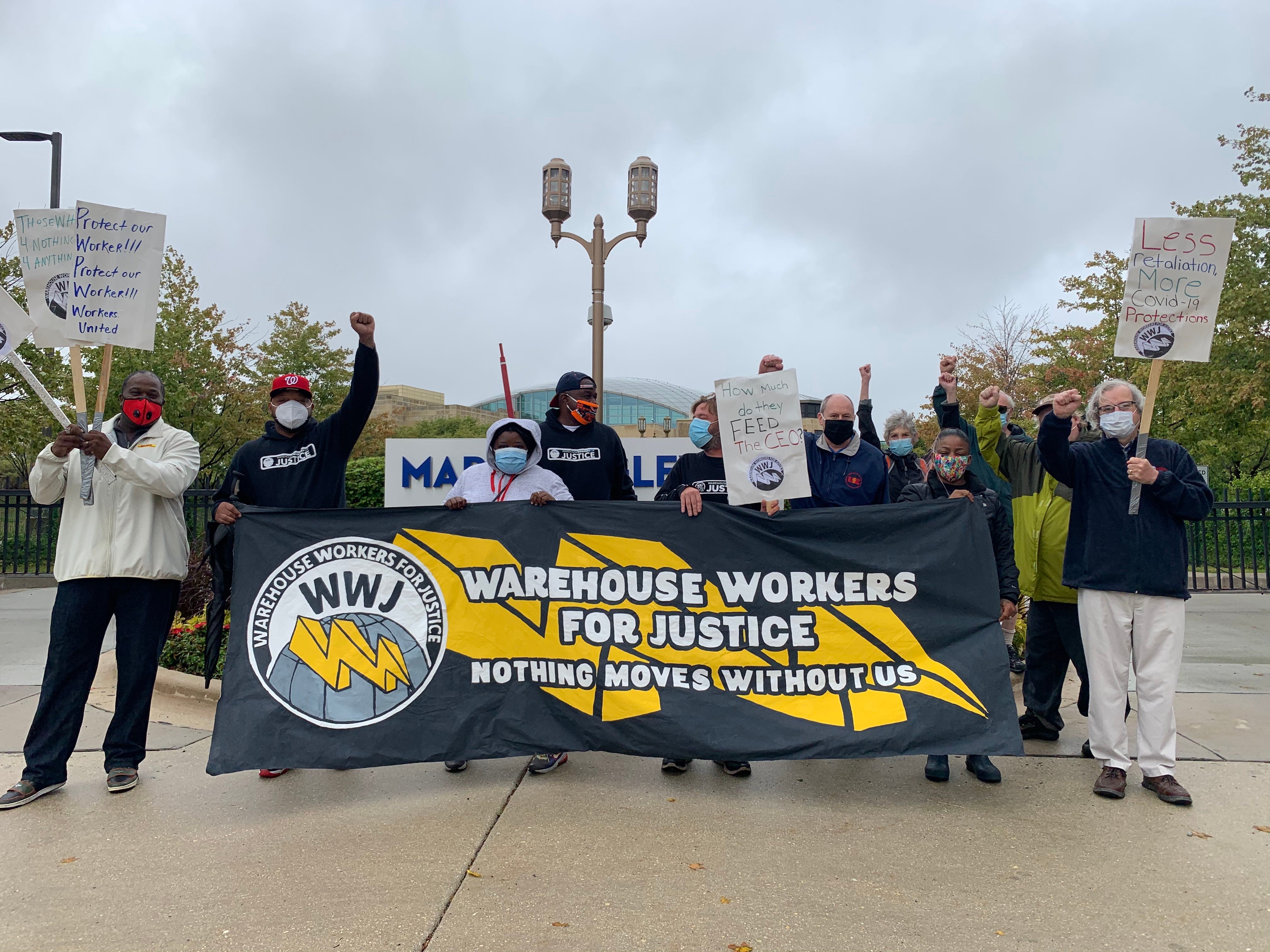 Because logistics companies DHL and XPO Logistics hired all workers in the Illinois warehouse where Samuel worked, Mars declined to comment on the claims detailed in this story. “They are not employed by Mars Incorporated,” said Caitlin Kemper, external affairs manager at Mars. A DHL spokesperson said the firm refutes “any allegations of unfair labour practices,” and XPO Logistics spokesperson Joe Checkler said the company’s “primary focus is the health and safety of our employees.”

But Samuel said after his experience working at the Mars plant, he’ll be buying candy from someplace else.

“You cannot find a better worker that was dedicated, came in every day, put my life in danger every day,” Samuel told Business Insider. “Candy should not be more important than our lives.” 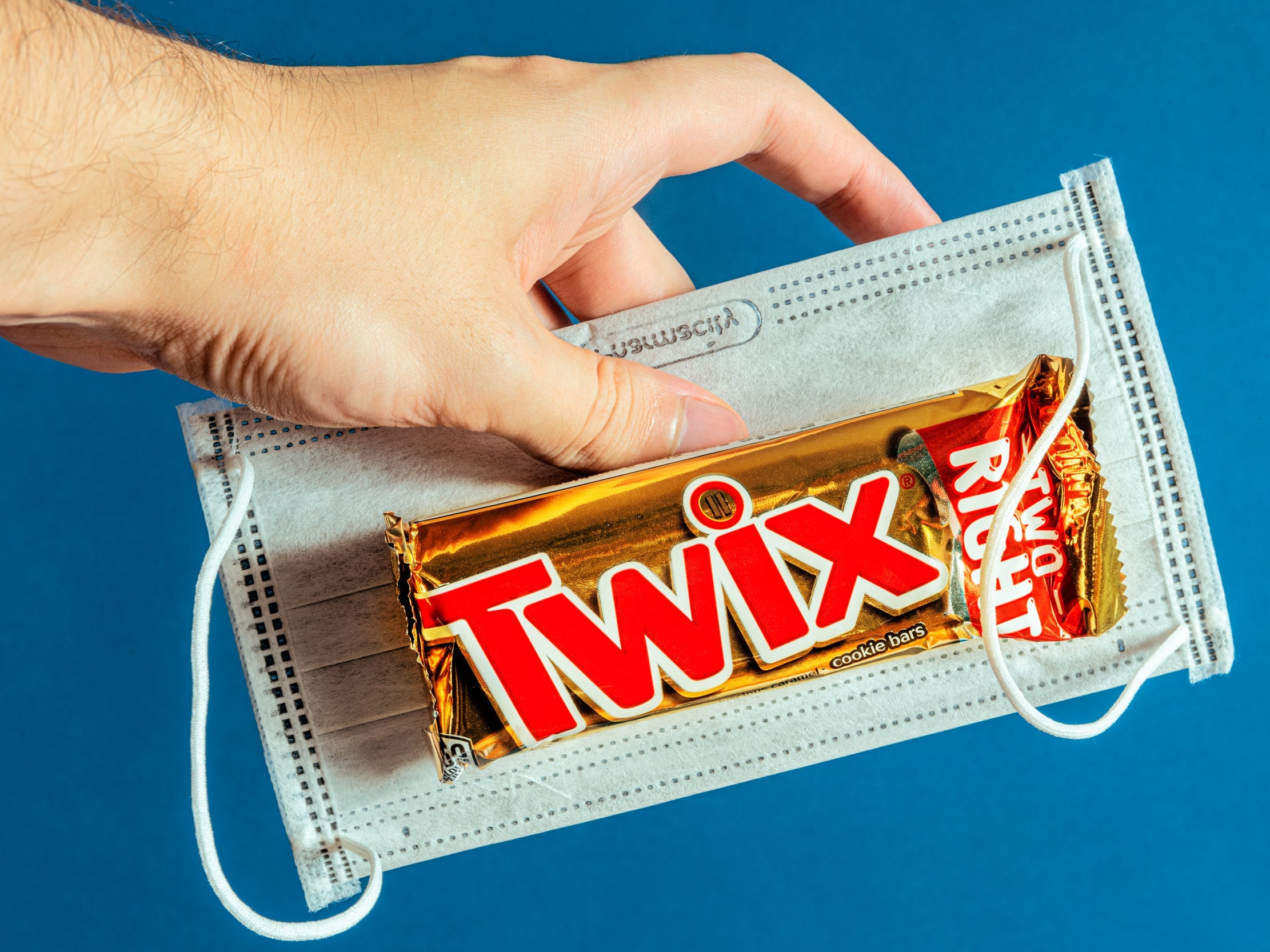 Samuel said problems at the Mars Wrigley warehouse in Joliet began in March.

When the coronavirus pandemic began spreading in the US, the federal government shut down businesses except for those deemed “essential,” which included manufacturing plants and transportation operations. Samuel and his colleagues at the distribution centre continued to go to work, risking exposure to the virus.

Samuel said he and other workers felt Mars did not do enough to keep them from contracting the virus. He said they initially did not receive masks to wear, and that the company did not offer hazard pay. Samuel said he made $US16.30 an hour at the distribution centre.

Sandy Moreno and Tommy Carden, representatives for Warehouse Workers for Justice (WWJ), began organising with Samuel and others at the Mars warehouse in May. Moreno and Carden said DHL told workers to use vacation time to quarantine after exposure to COVID-19 at the warehouse. DHL said there was a “low number” of positive COVID-19 cases in the Joliet warehouse, but did not disclose the total number of cases.

DHL, which has a contract with Mars, employed Samuel and other workers who load and ship candy, per WWJ. But some warehouse employees are employed by XPO Logistics, a transportation company that also has a contract with Mars. Ninety per cent of US Fortune 500 companies sought assistance from at least one third-party logistics provider as of 2017, according to supply chain consultancy Armstrong & Associates.

In the past, some large companies that use third-party companies to staff factories and warehouses have distanced themselves from contract workers when facing criticism. After a contractor died making chocolate for Hershey in 2009, for instance, the US federal government didn’t cite the large brand for his death because it didn’t technically employ him.

Carden said Mars has put responsibility for not meeting safety requirements on DHL and XPO Logistics, even though Samuel and his colleagues performed work for Mars.

“Although Mars can throw up their hands here, they are effectively hiding behind their contractors,” Carden said. “This is Mars Wrigley candy going through this warehouse at one of the most critical points in their supply chain, and Mars has the power to stop the retaliation and ensure that the workers’ basic demands for safety are met.”

Samuel and some other warehouse workers began circulating the petition addressed to Mars, XPO Logistics, and DHL in May. He helped to get over 100 signatures.

“A lot of people look up to me because I’m a very positive guy,” he said. “Once I got the petition moving, people wanted to sign the petition. Because they know if I believe in it, and I’m not scared or worried about it, they’re going to follow me.” 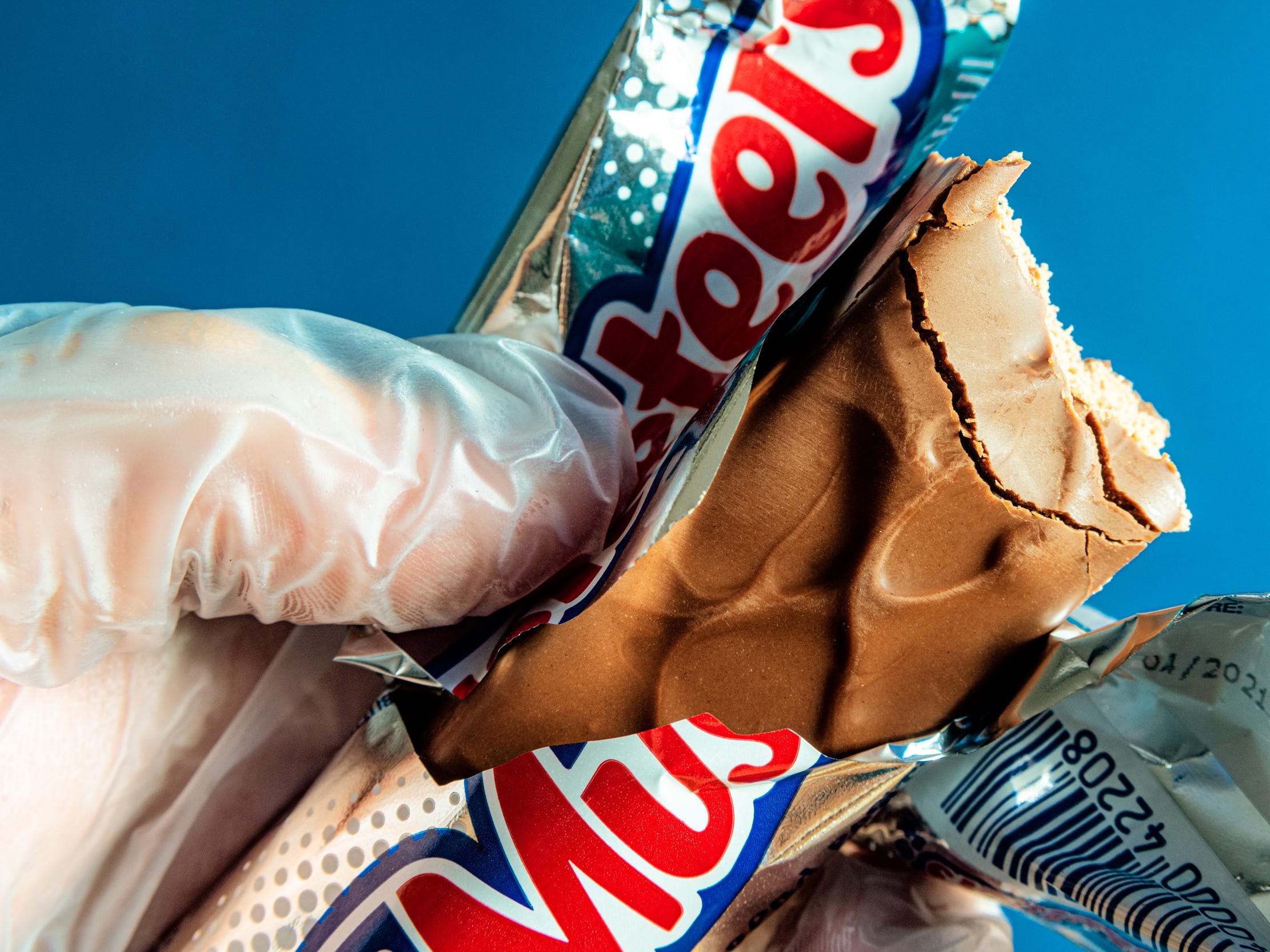 The group has since held multiple virtual press conferences and protests outside Mars headquarters. The petition, now open to the public, has more than 2,000 signatures.

Moreno said the company began intimidating workers who were active in circulating the petition. Raise the Floor, a low-wage worker advocacy group in the Chicago area, has filed four complaints with the National Labour Relations Board against XPO Logistics and DHL claiming they retaliated against employees who worked at the Mars warehouse and signed the petition. Neither XPO or DHL commented on the NLRB complaints.

In Samuel’s case, he said he was fired. On October 1, after working a 10-hour shift, Samuel said his managers called him into their office to tell him he’d been let go. He was terminated, they told him, for not wearing his mask when talking to another colleague at the warehouse. DHL did not comment on Samuel’s termination.

Samuel didn’t buy it. “If you review the cameras, I wear my mask every day, all day, for the whole day,” he said.

Still, Samuel said he handed in his badge, got his bag, and left in silence.

The Mars family, America’s third-richest family dynasty, has amassed an $US89.7 billion fortune. Frank Mars founded the private company, worth around $US37 billion according to Forbes, in 1911 selling hand-dipped chocolate from his Tacoma, Washington, kitchen.

Mars’s empire expanded in the midst of the 2008 financial crisis with the help of fellow billionaire Warren Buffett, who helped orchestrate a deal that allowed Mars to buy out his stake in Wrigley, the chewing gum maker. Buffett had pocketed $US6.5 billion from the deal by 2016. 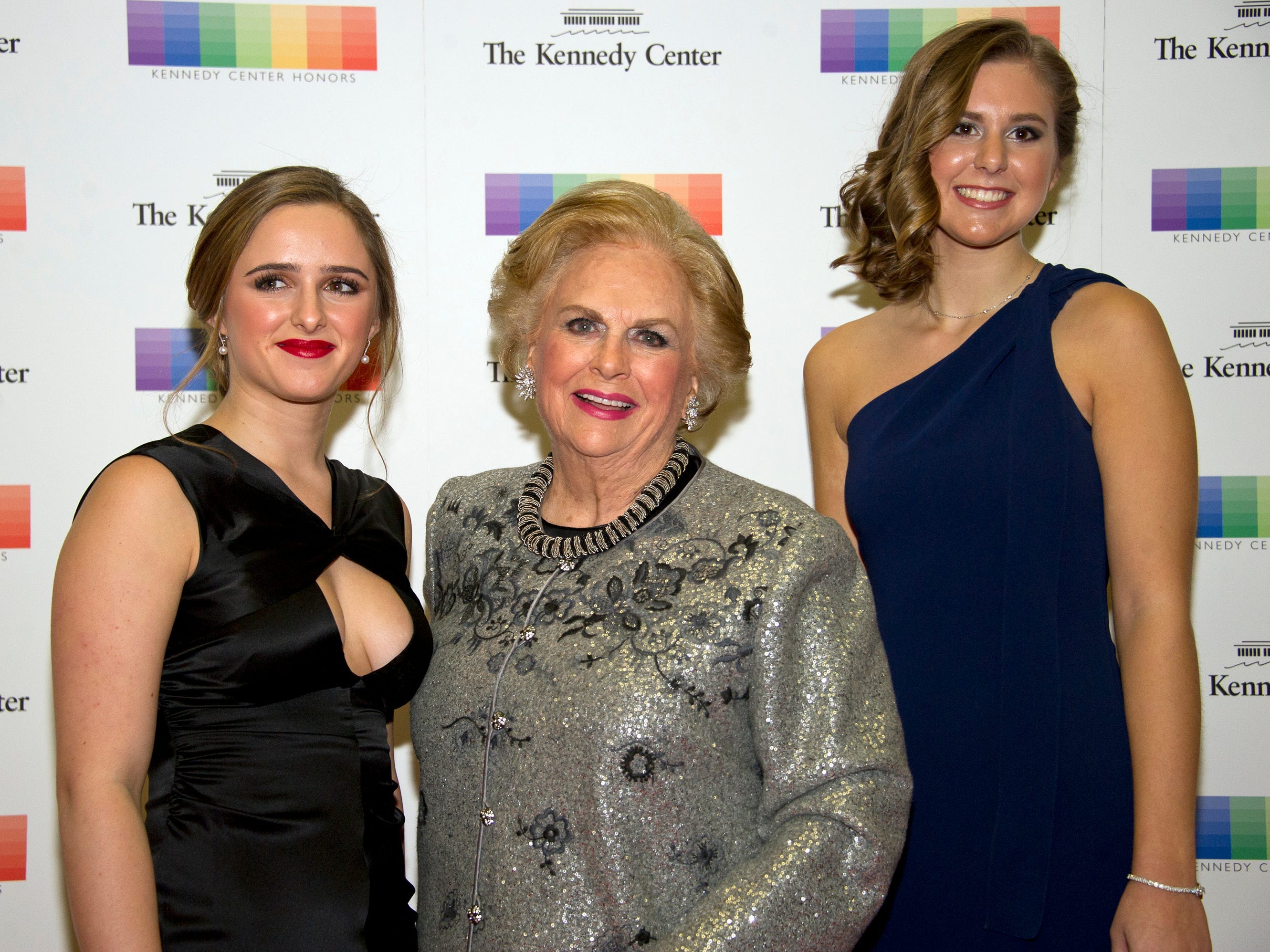 Ron Sachs-Pool/Getty ImagesThe Mars family is worth an estimated $US89.7 billion. Pictured: Jacqueline Mars and granddaughters.

Mars has made billionaires out of a handful of Americans in its 100-year history â€” but along the way, some people that make the candy said the job wasn’t so sweet.

However, The Washington Post reported in 2019 the company continues to source from farms that use child labour. In general, child labour continues to be an issue in West Africa, as the Department of Labour recently determined the prevalence of child labour and hazardous child labour in the region’s cocoa sector has gone up by 14% in the last 10 years.

Mars chairman Stephan Badger told Business Insider’s Cadie Thompson in 2018 the company, which has not gone public and has no plans to do so, agreed to become more transparent, in part to address “labour issues” in its supply chain.

“Child labour has no place in the cocoa supply chain which is why Mars Wrigley has committed $US1 billion USD as part of its Cocoa for Generations strategy to help fix a broken supply chain,” Mars Wrigley said in a statement to Business Insider.

Mars’s website lists four actions the company is taking to reduce child labour in its supply chain, including sourcing from plants that implement Child Labour Monitoring and Remediation Systems, or CLMRS. The company also committed to increase access to education for women and children in areas it sources cacao from.

But Charity Ryerson, the executive director and founder of the Corporate Accountability Lab, told Business Insider that tribal leaders and farmers at cacao growing villages in Cote d’Ivoire told her agency they had not been impacted by corporate social programs touted by Mars and other candy makers. Ryerson said Mars does not clearly indicate how many of the farms it sources from have protections against child labour.

“Corporate social responsibility representation should be assessed by impact, and not by commitments or public claims, because that is not actual responsibility,” said Ryerson. “That is PR.”

Mars workers are planning to spook the company on Halloween 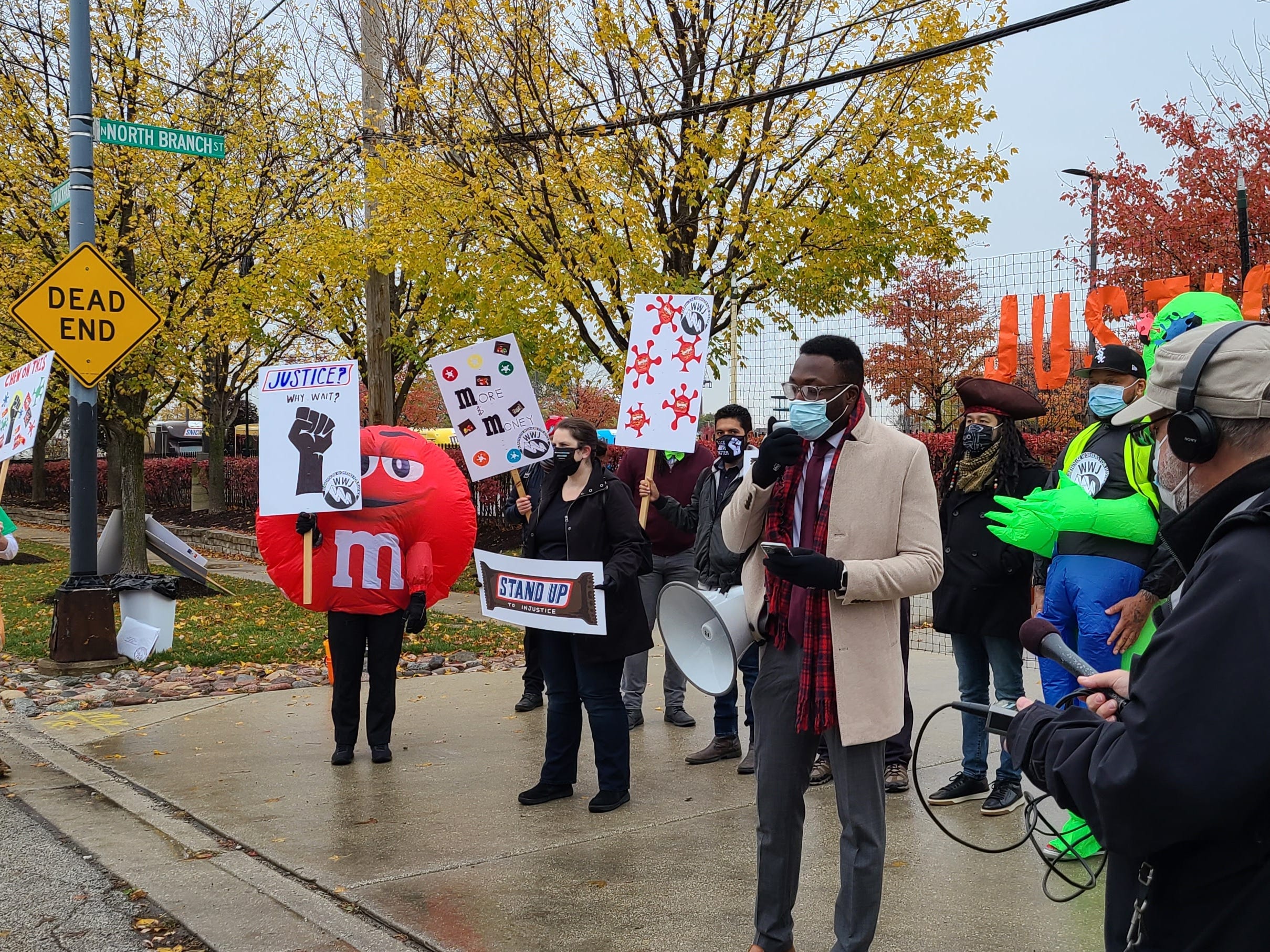 Today, the battle to get hazard pay for the Mars distribution centre workers continues, but without Samuel leading the charge.

The federal government had proposed federal hazard pay for essential workers in March, but it never materialised as Democrats and Republicans could not reach a consensus on how much to offer.

“These workers are taking on a greater risk for wages that did not incorporate that risk when they were hired,” said Pamela Meyerhofe, a post-doctoral researcher at Montana State University who has studied the demographics of COVID-19 frontline workers.

Sophia Zaman, executive director of Raise the Floor, told Business Insider her group is pushing for a statewide just-cause campaign that would make it harder for DHL and other firms to fire workers like Samuel. Montana is currently the only state that demands employers have a “good cause,” or proven work-related reason that “disrupts” business operations, before firing, NOLO states.

Zaman said the company should offer hazard pay and additional safety requirements before Halloween, when candy sales boost Mars’ bottom line. This year Mars could benefit more than ever, as the National Confectioners Association reported a 25% increase in Halloween chocolate sales in 2020, per The Washington Post.

“We shouldn’t be fired for demanding quarantine pay, these are just basic protections and benefits that many of us have and should be in place for a candy company that’s owned by the richest family in the world,” Zaman said. “In anticipation of their most profitable day of the year, Mars Wrigley certainly has the resources to offer these benefits.”

Current and former Mars workers and Warehouse Workers for Justice will host a “Halloween action” on October 31 in front of the company’s headquarters in Chicago.

Samuel said he will continue to be a “big voice” outside of Mars by advocating for his former colleagues to get better workplace protections.

But first, Samuel said he’s on a much-needed vacation.